A Mural, a Memorial, and a Message in Sharpsburg, PA

Saturday was one of those days in Pittsburgh when cloudless fog bleaches the skyline, but in Sharpsburg, Atithi Studios provided a splash of color. Sharpsburg sits on the city limits of Pittsburgh on the other side of the Allegheny River, dwarfed by the brown-grey forest of the Appalachian foothills. It’s a small town like nearby Millvale, Etna, and Aspinwall where much of Pittsburgh’s art scene has concentrated due to the amount of post-industrial warehouse studio space available. Sharspburg is home to Ketchup City Creative, ZYNKA Gallery, and then Atithi Studios on North Canal Street.

What makes Pittsburgh’s art scene stand out is its seamless integration into the local community. The artists of Pittsburgh are not a pretentious elite that looks down on the Rust Belt city around them. The community mural fundraiser this past Saturday at Atithi proved that much. Pam Bruno, a local painter and artist-in-residence at Atithi, has been at work on her mural on the back of Hitchhiker Brewing in Sharpsburg for several years now, and still lacked funding to complete it.

“There was no art here. I went to Sharpsburg Council and it was full of older people who weren’t so into the idea,” Bruno said. “I waited a few years, some new councilmembers came in, and they approved it,” she recalled. But lack of funding wasn’t the only reason Bruno’s mural was difficult to get off the ground—a personal loss made the project take on an entirely new meaning. When Bruno first began the process, one of her closest confidantes was Kathleen Trew Swazuk, a Sharpsburg local who’d been a nurse in the Vietnam War. “Kathy totally dedicated herself to helping me with it,” Bruno said. “She just kept pushing me, and she’d text me after the treatments for her Agent Orange disease. She never stopped.” Bruno recalled how around two in the afternoon when the sun moved across the sky there would be a shady corner that Swazuk could sit in comfortably. 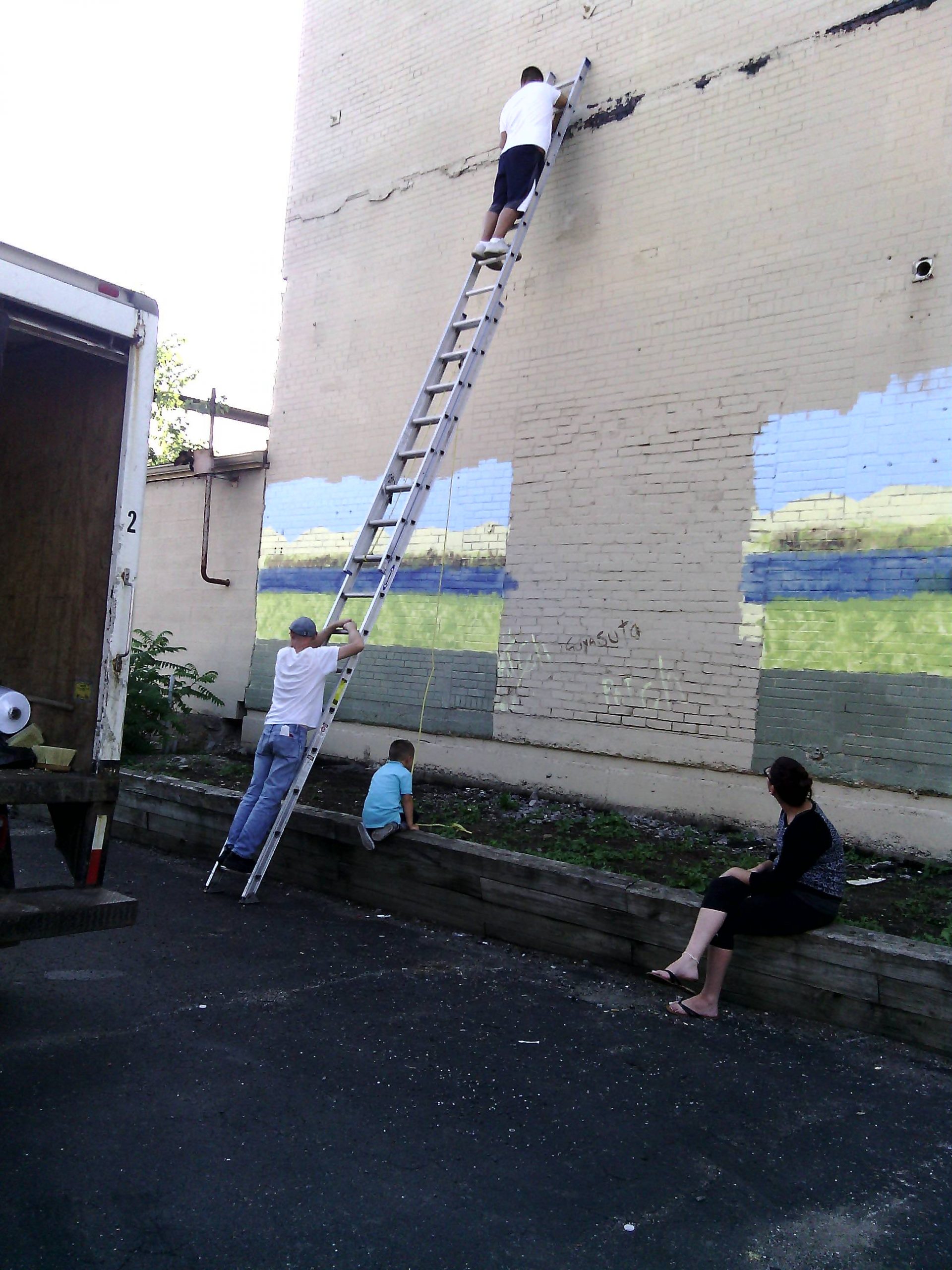 “Kathy totally dedicated herself to helping me with it,” Bruno said. “She just kept pushing me, and she’d text me after the treatments for her Agent Orange disease. She never stopped.”

Swazuk’s Agent Orange disease eventually took her life in 2020, leaving Bruno devastated by the loss of her friend and the community mourning a figure who breathed so much life into it. “After Kathy’s death, that’s when the mural morphed into more than this ‘tree of life’ that represents Sharpsburg and the surrounding area,” Bruno said. Bruno decided to rename the project the Kathleen Trew Swacuk Memorial Mural and seek further funding for a plaque on it. “I wanted to give her the respect she deserves,” Bruno said, and so she sought additional collaborators to put together a garden.

The mural itself is an enormous tableau across a brick wall which pays homage not just to Sharpsburg’s industrial history, but also to the Native American inhabitants of the land. “There’s an indigenous story about the tree of life where Mother Earth called to a turtle from the river and placed seeds on the turtle’s back so that the tree of life could grow in the delta,” Bruno explained. “Everything on the ground is indigenous,” she said. At the center is Guyasuta, a Seneca leader whose statue sits at the center of Sharpsburg’s downtown, and further imagery from Seneca legends makes up the forest floor of the landscape. 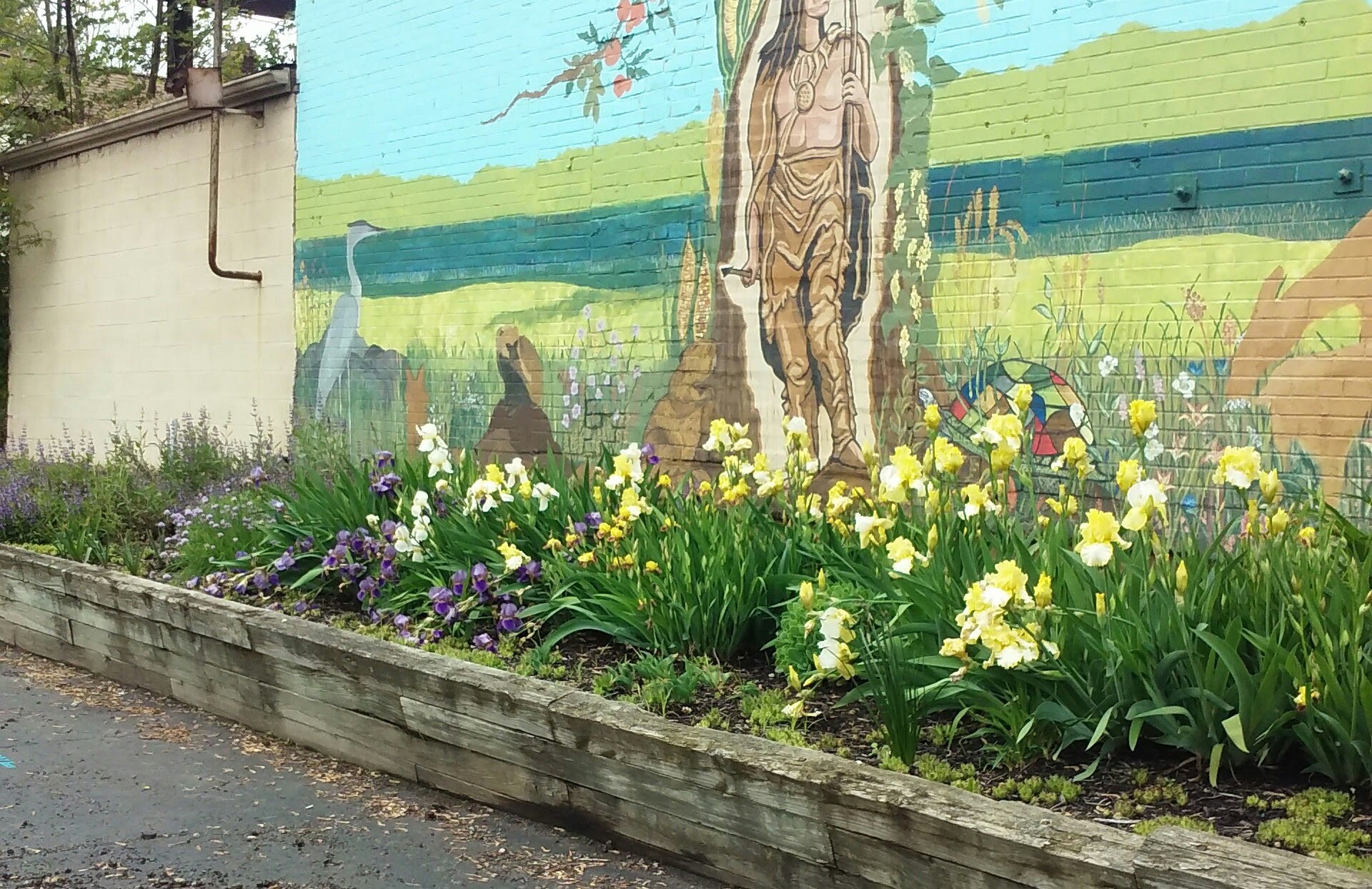 “Everything on the ground is indigenous,” she said.

Pittsburgh is a city full of relics from industrial history, but Sharpsburg and the surrounding towns in particular are full of eerie remnants of the Heinz, Carnegie, and Mellon dynastic reign over the Rust Belt. But these robber barons’ legacies are part of what give Pittsburgh its character, and Pittsburgh’s identity as the city that built America gives its residents pride and grit. Bruno explained to me that most of the Heinz House historic objects on Pittsburgh’s North Side were taken on a barge from Sharpsburg, the original site of the “Once you get into the tree, there’s a Heinz branch and one branch that’s a canal since this area of Pennsylvania was once a canal,” Bruno said. Bruno’s mural doesn’t depict the indigenous Seneca culture and what Pittsburgh eventually became as separate, but rather as two parts of the same story inextricable from each other.

The “tree of life” motif exists in many cultures, but for Pittsburghers it is an especially poignant image. In Judaism, we have the concept of etz chaim: the tree of life that makes up humanity’s knowledge of the divine. But for Pittsburgh residents, those words also bring to mind the Tree of Life temple on Shady Avenue that was the site of the deadliest antisemitic attack in American history. “Though I started the mural before the shooting, it took on a different meaning after that,” Bruno said. “I grew up Catholic but only actually read the Bible recently, and I started to think of the tree of life as related to the Holy Spirit and the divine feminine. And every culture has a version of it.” Bruno is right, from etz chaim to Yggdrasil to the Bodhi tree, the tree of life is an image that connects all of us.

And Swazuk’s memory drew a sizable crowd of painters, poets, and artisans of all kinds to Atithi Studios’ fundraiser for Bruno’s mural. Since Swazuk was an avid writer of poetry, Atithi Studios founder Corey Ochai put together a lineup of local writers including local poet Schereéya, silversmith-turned-writer Hez Bohin, owner of the Novelty Art Collective Brittany Hartman reading her poetry in public for the first time, and myself. Swazuk’s poetry collection, Wartorn Hearts, which details in heartrending detail her experiences as an army nurse at the age of nineteen. Brenda Nachreiner, another artist-in-residence at Atithi Studios, read aloud one of Swazuk’s poems, remembering that she herself had had a correspondence with a soldier in the Vietnam War as a teenager. Several veterans were in attendance in memory of the work that Swazuk did for those who served. 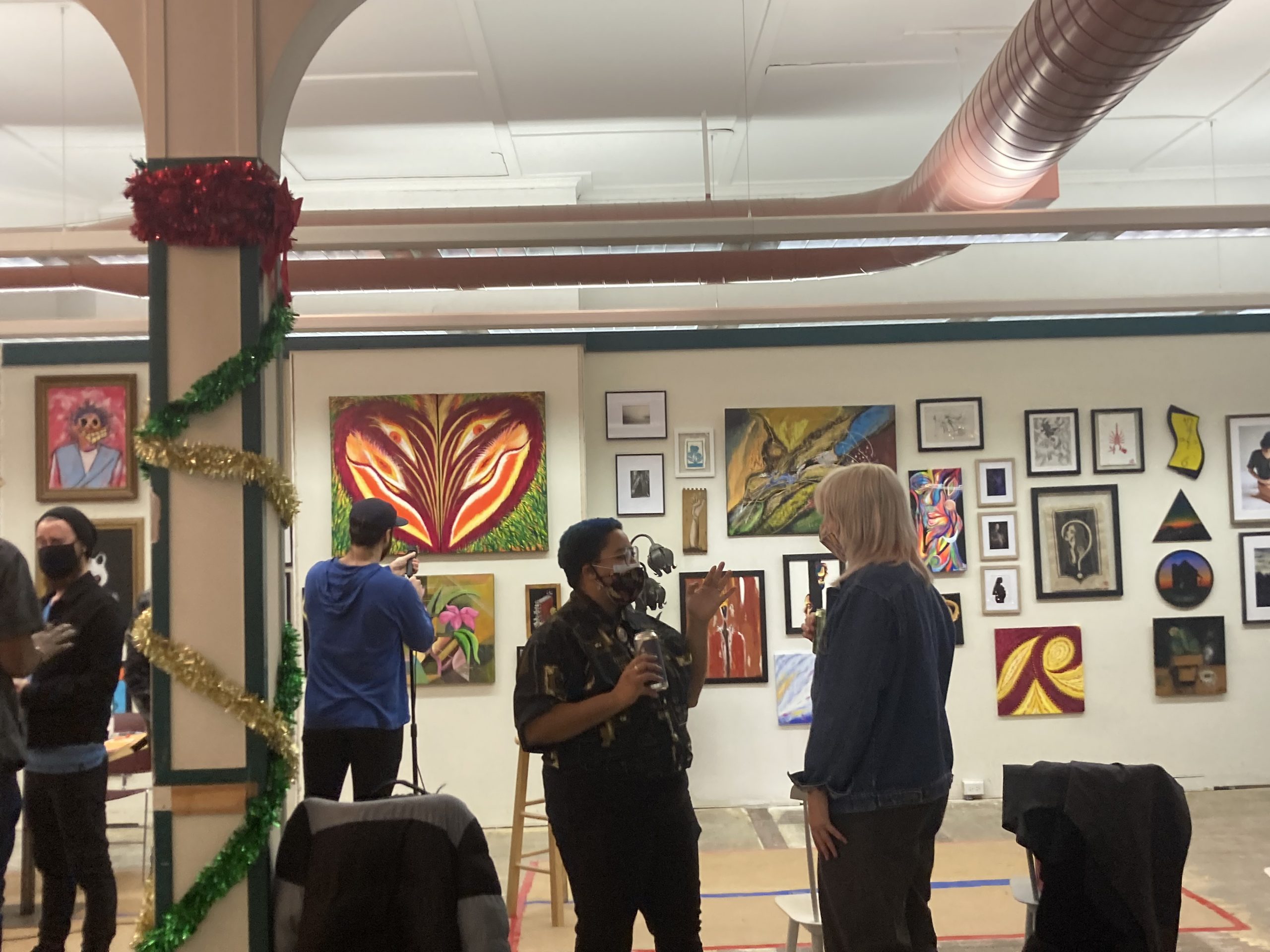 From etz chaim to Yggdrasil to the Bodhi tree, the tree of life is an image that connects all of us.

Additionally, local printmaker Mellow Threat Visuals did a live painting display, which Bruno’s grandchildren and Ochai’s daughters flocked to get their hands on. Some of Swazuk’s own visual art was on display alongside wares from local vendors who had rallied behind the cause. That night, Bruno met her goal for fundraising, meaning she can continue to work towards honoring Swazuk’s memory through her mural. For me, personally, it was the first event that I’d sold every book I brought with me at. The fundraiser was intergenerational and brought so many mediums together behind a common cause to uplift a community member. More than anything, remembering Swazuk made Pittsburgh feel like home.