Amanda Phingbodhipakkiya was riding the subway in the early days of the pandemic in New York City when someone shouted ‘ew, gross, get away from me’ and ran to the other side of the train car. Phingbodhipakkiya was speechless. That night, she wrote in her journal what she wished she would have said: “I did not make you sick. This is my home, too.”

She emblazoned these statements—along with others, equally direct and painful—in her public art series, ‘I Still Believe in Our City.’

The series blanketed an iconic, central Brooklyn subway station in vibrant portraits of Asian, Pacific Islander, Black and Latin American women during the cold winter of 2020. That same year, the FBI reported that anti-Asian hate crimes increased more than 73 percent, including horrific cases of fatal violence. Since then, Phingbodhipakkiya’s portraits, rich in texture and symbolism, have proudly prevailed in hundreds of ad spaces, walls and billboards all over New York City and Boston.

Phingbodhipakkiya, who has an educational background in neuroscience and design, said the purpose of her work was to give Asian and Pacific Islander people a sense of belonging in NYC.

“Neuroscience tells us that when we are ostracized or feel like we don’t belong, our bodies react as if we had experienced physical harm,” Phingbodhipakkiya said. “My art is about creating a sense of belonging.”

Her public series also gained international acclaim. The American Library of Congress, the Victoria and Albert Museum in London, the Museum of the City of New York and the Museum of Chinese in America are just a few of the institutions that have acquired a piece of her work from this series for their archives.

After the spa shootings in 2021 killed eight people (including six Asian women) in Atlanta, where she grew up, TIME Magazine put one of her pieces on its cover.

The people in ‘I Still Believe in Our City’ and Phingbodhipakkiya’s subsequent series, ‘We are More’ each have that same look of defiance and pride in their eyes, which Phingbodhipakkiya said is a look she knows well.

While the ‘I Still Believe in Our City’ campaign was primarily a response to the rise in hate crimes and harassment, ‘We are More,’ expanded the theme to focus on hope and pride, one portrait declaring ‘Proud to be Asian.’ Both campaigns also lovingly declare Black Lives Matter. 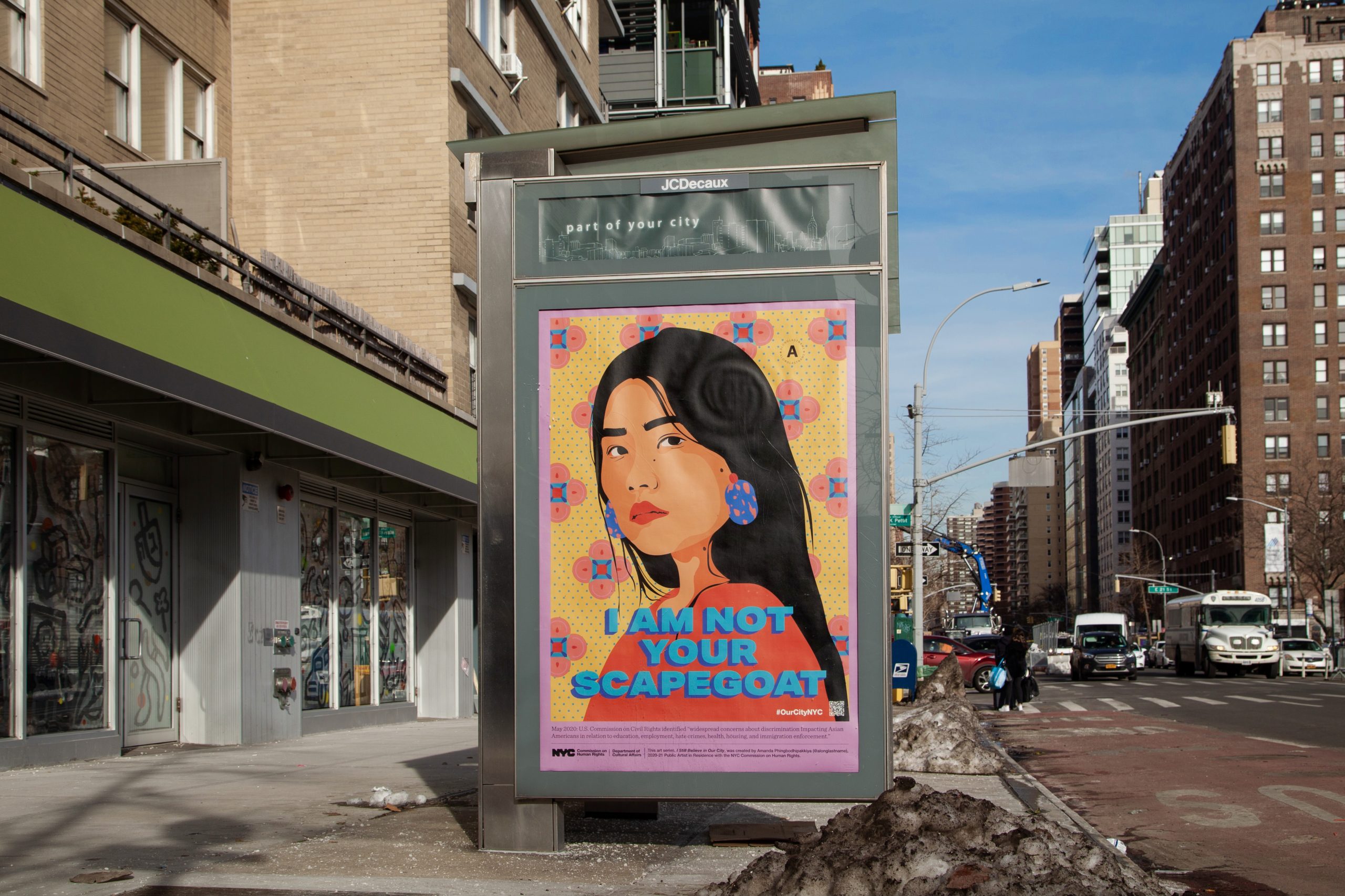 The second campaign “is a celebration of the expansiveness of the Asian American community, our resilience and range,” Phingbodhipakkiya said. ‘We are More’ was put on in collaboration with Times Square Art in over 120 locations. The series used eye-catching questions including ‘When will you love us as much as you love our food?’

Everything about her artwork is unapologetic and demands attention. The bright floral patterns behind the people in her portraits are inspired by the colors and patterns of traditional Thai and Indonesian fabrics, which is where her parents are from. The flowers used in the background of her portraits—the lotus flower, which blooms in the mud, and the chrysanthemum, which is one of the only flowers to bloom in winter—both symbolize resilience.

“I think people misunderstand my work sometimes—I use bright colors, vibrant imagery and my work is filled with hope, not because I’m trying to diminish the grief or the pain that communities of color are experiencing, but because we don’t need to be reminded of what we experience on a daily basis,” Phingbodhipakkiya said. 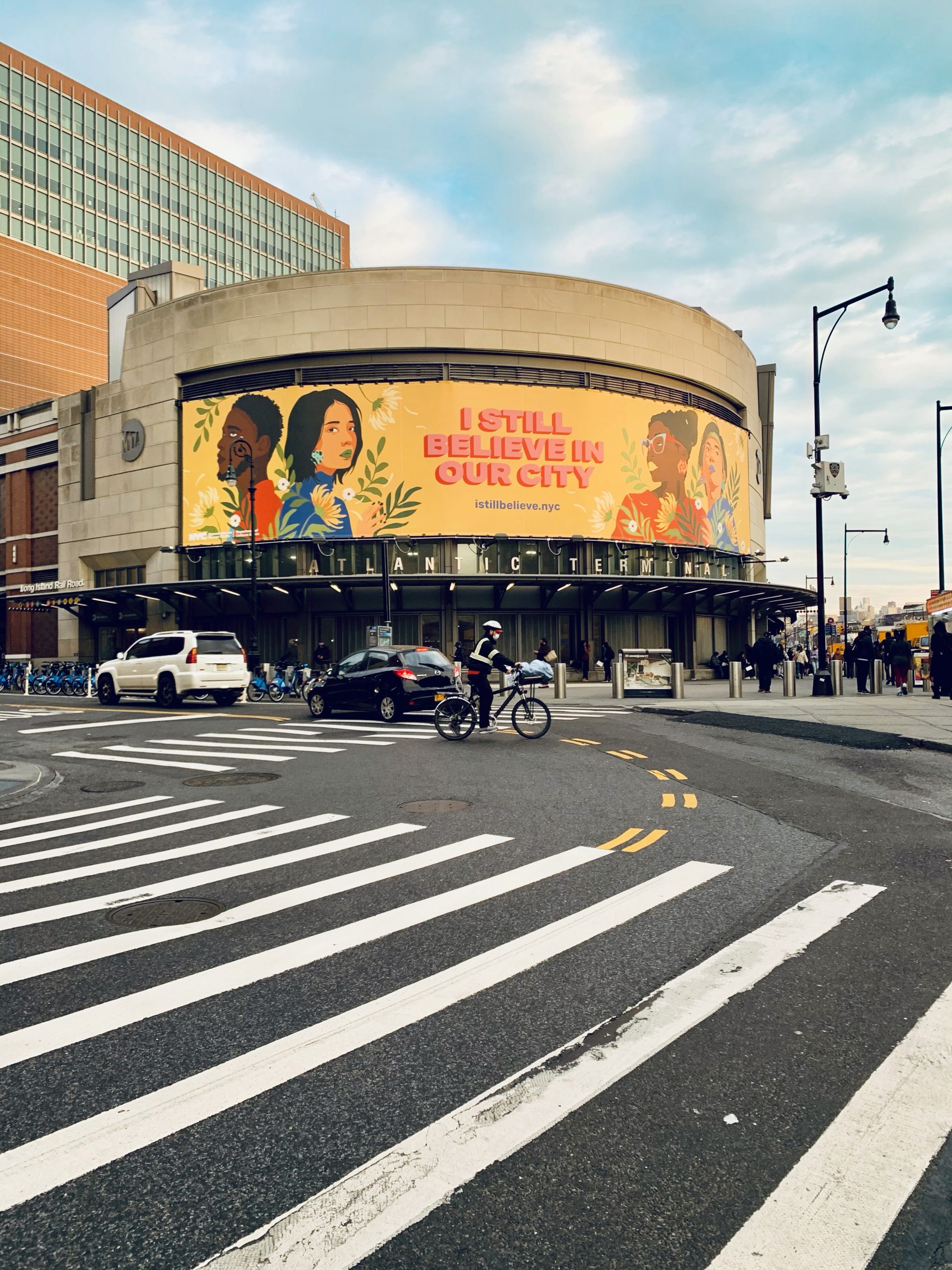 “I think people misunderstand my work sometimes—I use bright colors, vibrant imagery and my work is filled with hope, not because I’m trying to diminish the grief or the pain that communities of color are experiencing, but because we don’t need to be reminded of what we experience on a daily basis.”

There’s something about each portrait that feels uniquely intimate. Some of the faces look like they just exhaled, others look like they’re about to speak with conviction about something important. Some of the characters seem to be looking optimistically into the sky, while others stare directly back at the viewer.

Despite this, Phingbodhipakkiya explained the drawings aren’t renderings of individual people in her life, but combinations of features gleaned from the people around her. That hasn’t stopped people from seeing themselves in her work, though. A parent reached out to tell Phingbodhipakkiya that their daughter brought a printed-out version of a portrait to school because she was getting bullied for how she looked. And at any protest in NYC, there’s a good chance of seeing someone holding a printout of her artwork, high above their heads. 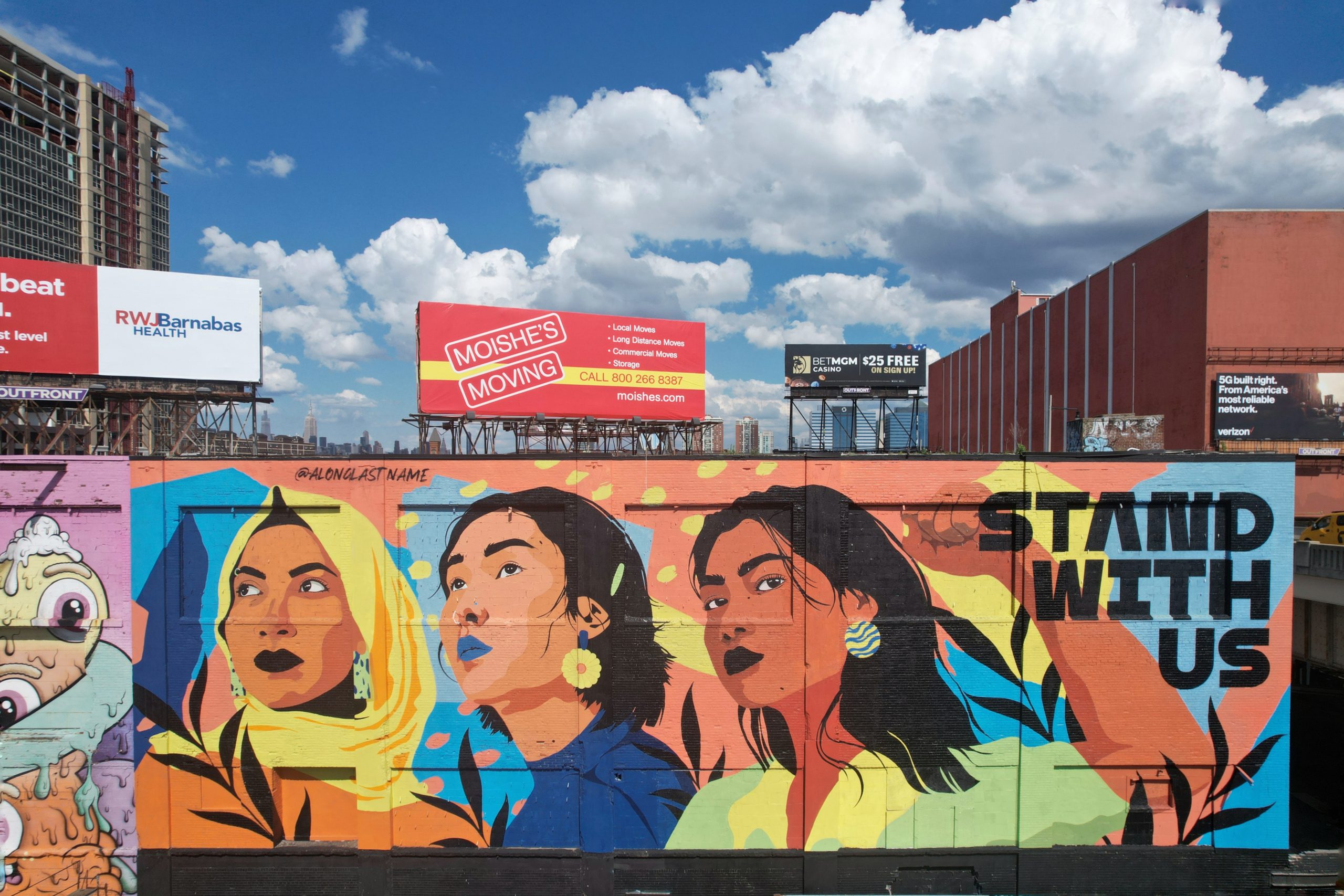 “What we do need to be reminded of is our resilience and the joy that we deserve to have because it’s so easy to lose sight of that.”

A young New Yorker thought one of the pieces looked so much like her, that she messaged Phingbodhipakkiya on Instagram to ask if the artist had somehow modeled the image directly after her. “That was a full moment of connection, like, somebody who just saw the work in the subway saw themselves,” Phingbodhipakkiya said.