Imagine you couldn’t read this article, or any book or written word, for that matter—imagine you had no need to, because as a Renaissance-era laborer, you spent little time reading for pleasure the way contemporary people do every day on Instagram or New York Magazine. But every Sunday, you shuffled into an enormous, sprawling church, sat down in the pews, and gazed up at the glittering, magnificent fresco on the ceiling and felt the power of the sacred space you’d entered.

It’s difficult to put yourself in the shoes of people who still were getting used to the technological advancement of the printing press. But street art reminds us of the enduring power of images to convey complex ideas to everyone who passes them by on the sidewalk. Frescos aren’t exactly street art in the traditional sense, but French painter and polymath Amaury Dubois puts a contemporary spin on an ancient art form with his murals. In 2019, Dubois painted his signature “curvism” style onto the ceiling of Sainte-Madeleine of Châtelaillon-Plage, an 1882-built church just outside of La Rochelle, a fishing town in the west of France.

Dubois didn’t start out painting churches, but his artistic process has always had a metaphysical dimension to it. He coined the term “curvism” to describe the undulating dance of rounded lines that make up his canvases and murals. “I don’t like right angles, straight lines or anything linear: you already know where the line ends, that it will go from point A to point B, which is no fun,” he said. “A curve always has an unknown, something unexpected that can surprise, something alive and organic.” The lines of Dubois’s paintings are never stagnant, and he embraces the humanistic element of artmaking. “Nobody works in a straight line, except a machine: I want to make a living painting, which reflects the emotions and the human soul. I want my work to reflect the energy of life, and life is not linear,” he explained. Like the ancient frescoes, Dubois’s work is meant to evoke emotion without using words. 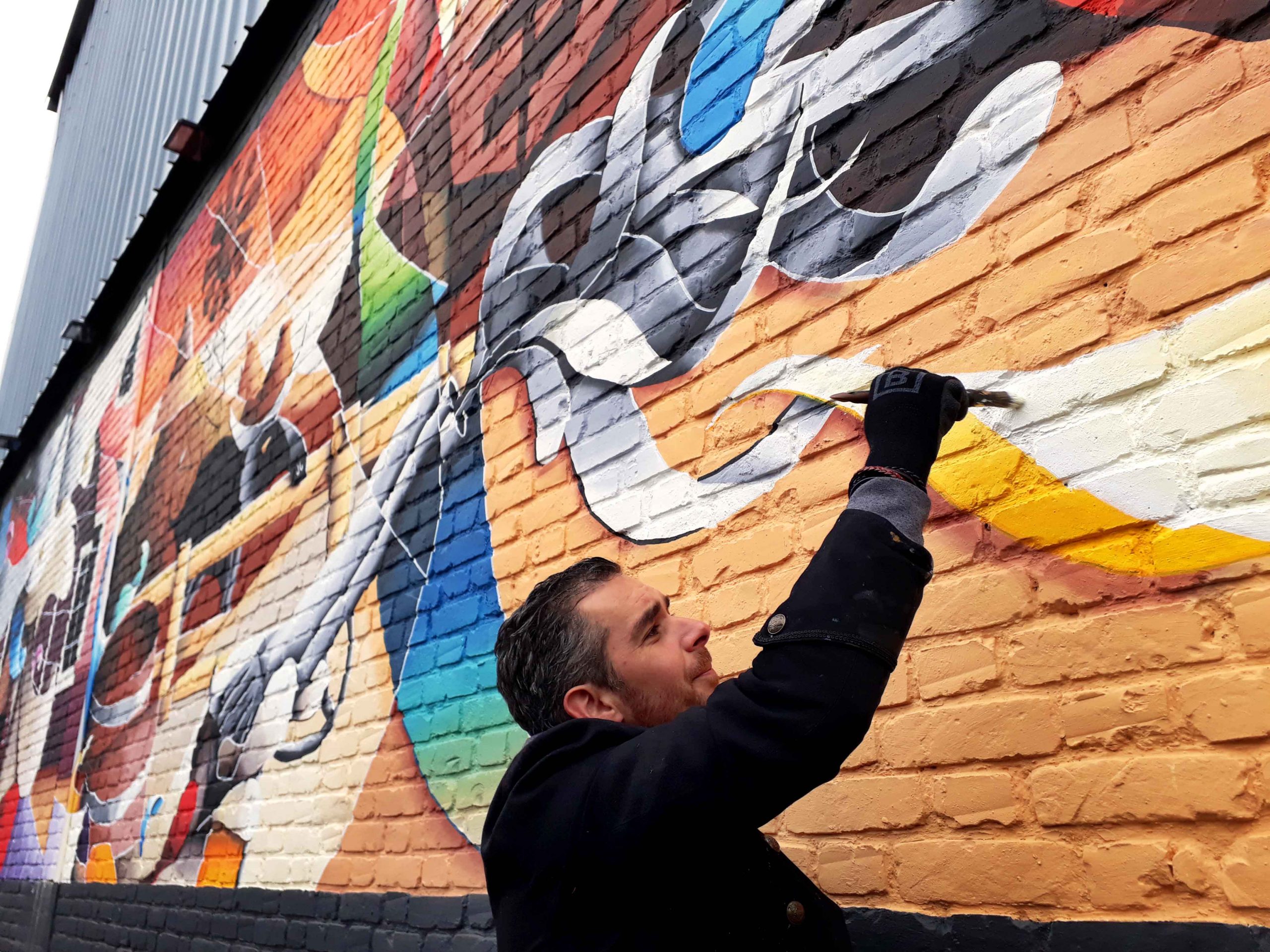 “Nobody works in a straight line, except a machine: I want to make a living painting, which reflects the emotions and the human soul. I want my work to reflect the energy of life, and life is not linear.”

Art’s universality is easy to lose sight of in a world that commodifies everything and demands perfection. “I have much more respect for an imperfect painting that has been made with heart and soul than for a painting that looks beautiful but has only been imagined with the aim of being sold,” Dubois explained on the topic of his inspirations and influences. “What inspires me is above all people who know how to create a sincere and uncompromising emotion.” And Dubois’s work certainly shows that sincerity. Though his murals show technical prowess, they also demonstrate a playful nature that perhaps comes from Dubois’s ten years of skateboarding in the streets and other creative endeavors in music and writing. 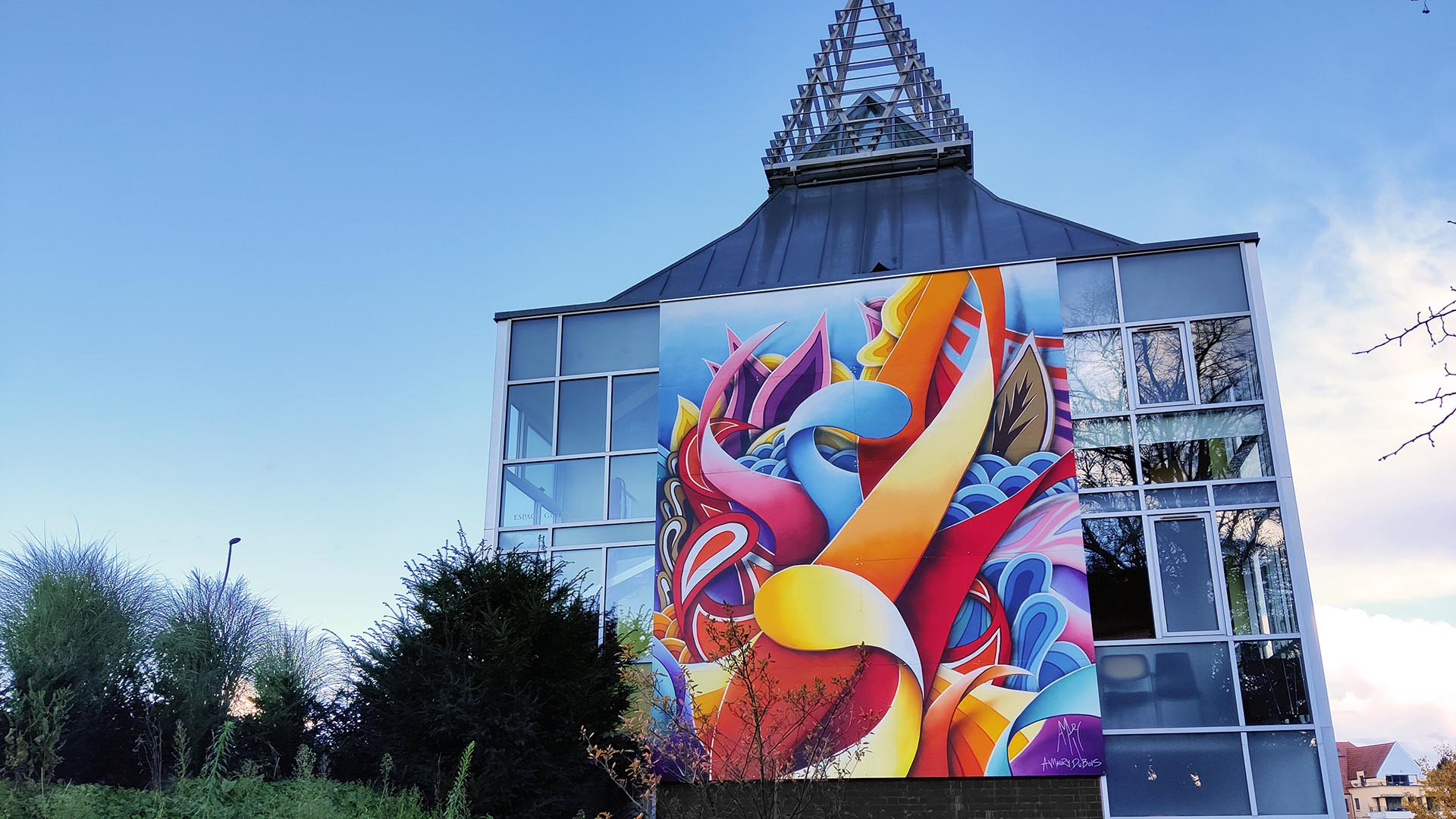 “I have much more respect for an imperfect painting that has been made with heart and soul than for a painting that looks beautiful but has only been imagined with the aim of being sold.”

A self-described “jack-of-all-trades,” Dubois’s art brings to mind everything from Picasso and Mondrian to stained glass windows and kaleidoscopes. In a way, they are kaleidoscopes of sorts, made up of little bits of Dubois’s experiences and feelings. “Everything I experience, see, hear, and touch gives me an image, and when it has settled in my mind, I make a painting of it. My works are windows on this exchange between two neurons,” he said. It’s rare to find work where the paint moves in front of the viewer’s eyes without needing the influence of an acid trip, but Dubois’s use of “curvism” creates a ripple effect of the turquoise, crimson, and yellow swirls.

One of the central issues of human life is how to navigate the things that we can’t see. The emotions, the thoughts, and the beliefs that come from jolts of electricity through our neurons but can be as painful as a knife-blade or as fulfilling as a home-cooked meal. Dubois leans into this philosophical aspect of the creative process, so it’s no wonder that he started painting the spaces that measure physical-metaphysical relationship most acutely: houses of worship.

“When you paint in a building as symbolic as a church, whether you are a believer or not, you can’t close your eyes to the spiritual dimension,” he recalled of his experiences painting in Chatelaillon-Plage and more recently Calais. “It’s a place where people come to meditate, to say goodbye to a loved one or to say yes to one’s better half for life,” Dubois said. “You are carried by the power of the place and the symbolism it contains. Painting on a church pushes you to surpass yourself: it’s not a simple painting, it’s a challenge and a responsibility that you don’t have when you’re ‘just’ painting a piece.”

“When you paint in a building as symbolic as a church, whether you are a believer or not, you can’t close your eyes to the spiritual dimension. It’s a place where people come to meditate, to say goodbye to a loved one or to say yes to one’s better half for life. You are carried by the power of a place and the symbolism it contains.”

Dubois is well-prepared for that responsibility, though, given how articulate he is about his own work and how much thought and care goes into each piece he puts together. His fine art collections on canvas depict scenes from the plains of Flanders, the verdant forests of Mauritius, the unique architecture of Cordoba, or the shores of Lago di Garda. Each collection evokes the essence of the place by highlighting the curves of the landscape. Often Dubois works with a photograph and uses the curvature to carve out a new interpretation of reality.

Despite being an experienced fine artist, Dubois cited the process of painting frescos and murals as distinctly different from his canvas work. “I always find that when you make a canvas, you dominate it, but when you make a fresco, it dominates you, it tells you what to do,” he said. There that metaphysical element to his work appears again. But anyone, a painter, a writer, or a musician, could tell you that sometimes a piece takes on a life of its own and enraptures the artist. “When I paint a canvas, I have the impression that I hold the reins, that I guide the creative process. When I paint a fresco, that’s the fresco that imposes its rhythm on me, which overtakes me,” Dubois reflected. “That’s also why I need to alternate moments in the studio and frescoes. I couldn’t do only frescoes, nor could I only do the workshop.”

His work may have made its way onto the walls of his hometown, Lille, the ceilings of ancient churches, or galleries in Singapore, but Dubois’s favorite place to paint will still always be his studio. “I need my studio’s calm to recharge my batteries,” he said. “It is the place where I am reborn each time, like a welcome break between the tumult and excitement of projects outside the walls.” Whatever he creates next in that studio, Amaury Dubois is an artist to watch. His work distills painting down to its purest form: It allows viewers to see the world through his vision but doesn’t impose on them. Modern life may have advanced past the need for frescoes, but Dubois’s art shows that public art will always be a force for universal expression and that it’s worth it sometimes to drop our modern priors and return to a time when art wasn’t a commodity for gallery walls. In the time of frescoes, sometimes art was all you had.