Angelina Taylor’s art has traveled all the way from Shanghai to Philadelphia to New York. Her work spans years of experiences from each one of those places, and her paintings, whether digital or traditional, pop with vibrant color to evoke her memories and emotions. I first met Angelina in grad school and we became fast friends. Over a bottle of wine, we discussed the different transitions in her life.

Taylor was born in Shanghai and arrived in Philadelphia in 2008. “I had a really bad relationship with my mom,” she said. “I wanted to escape and pursue something.” Taylor’s tumultuous home life had contributed to her desire to study art in the first place—“When I would feel frustrated and sad, after these really big arguments with my mom, I would draw on the wall with lettering describing how I was feeling,” she explained. When she came to Philadelphia, she left behind her family and a long-term relationship, but still enjoyed the freedom of living a new life, which describes as feeling like “a bird leaving the nest.”

“When I would feel frustrated and sad, after these really big arguments with my mom, I would draw on the wall with lettering describing how I was feeling,” she explained.

Though Taylor took a leap of faith, it has no doubt paid off in the community of artists she’s found at Temple University in Philadelphia, where she attended the Tyler School of Art, and Sotheby’s Institute, where she later studied art business in New York. “In Shanghai, the way I was taught art was just like ‘oh, let’s get you through college.’ They gave examples of different artist’s drawings and paintings for you to copy and practice every day,” she said. Chinese schooling focused heavily on drawing live models and creating copies of existing works. They put a lot of emphasis on art critiques and comparing student’s work side by side. But when she arrived at Temple, the teaching methodology was unfamiliar to her. 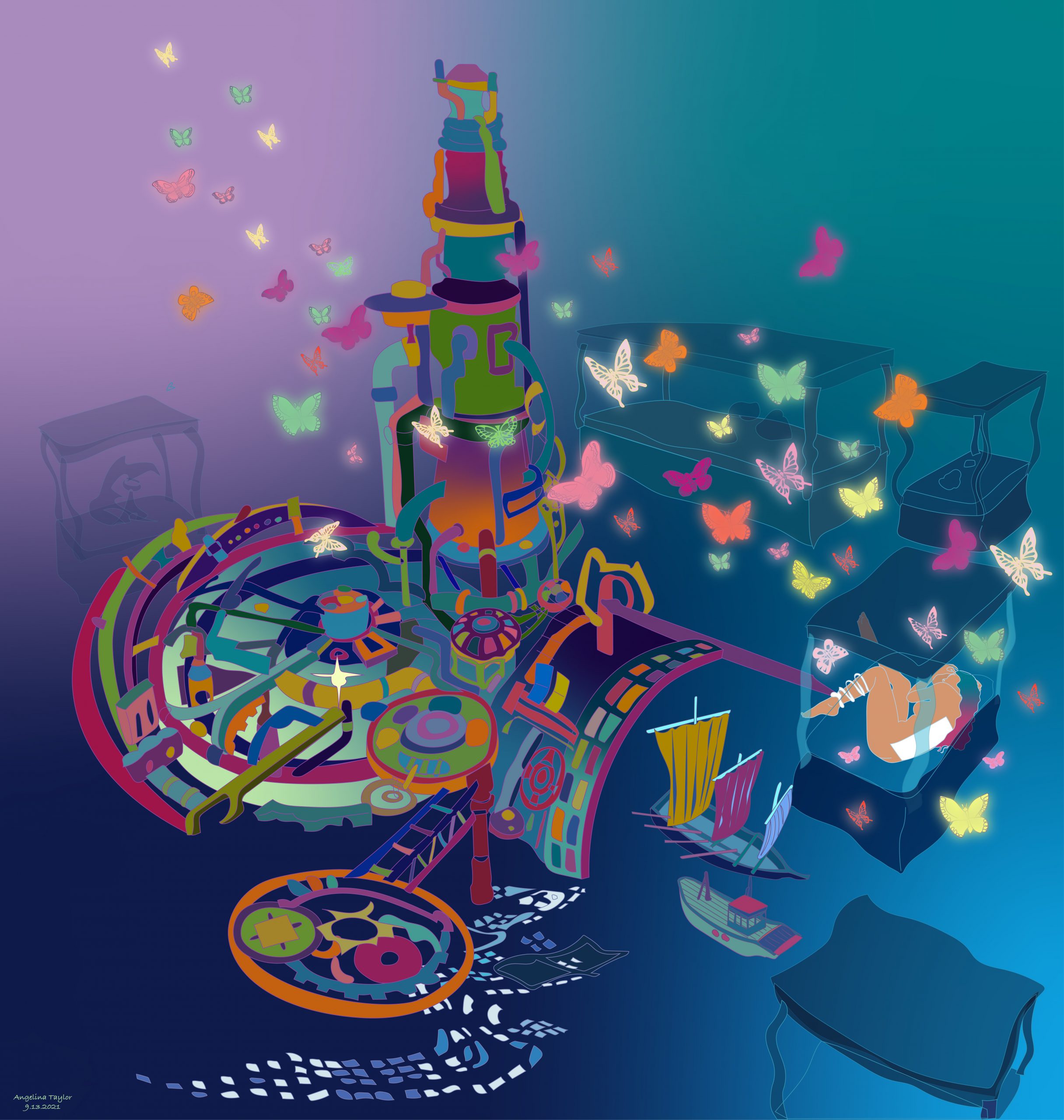 “When I was 19, all of a sudden the professors start telling me, ‘you have to draw your own thing, you have to find out who you are and find your own identity as an artist.’ When I was learning art as a kid, all I knew was to copy images.” She started discovering more western style artists like Lucio Fontana and Jean-Michel Basquiat. She recounted finding her way as the biggest struggle in American art school. “The first couple years I was at Temple, I was just trying to find myself. And I was like, I have no fucking clue what that is.” Though she struggled to understand the new freedom of creating her own art, she knew she still had her sense of purpose and her drive to create.

“When I was 19, all of a sudden the professors start telling me, ‘you have to draw your own thing, you have to find out who you are and find your own identity as an artist.’”

Much of Taylor’s work uses warm color palettes of pinks, lilacs, and yellows. She recounts that the day she left Shanghai, ten of her friends were at the airport to send her off, and she describes a “warm love and feeling.” The warmth of love is a consistent theme in Taylor’s work. One of her more recent digital pieces, Someone Who I Could Call Home, she describes as being about the idea that “no matter where you travel to, there’s always a person waiting for you.” 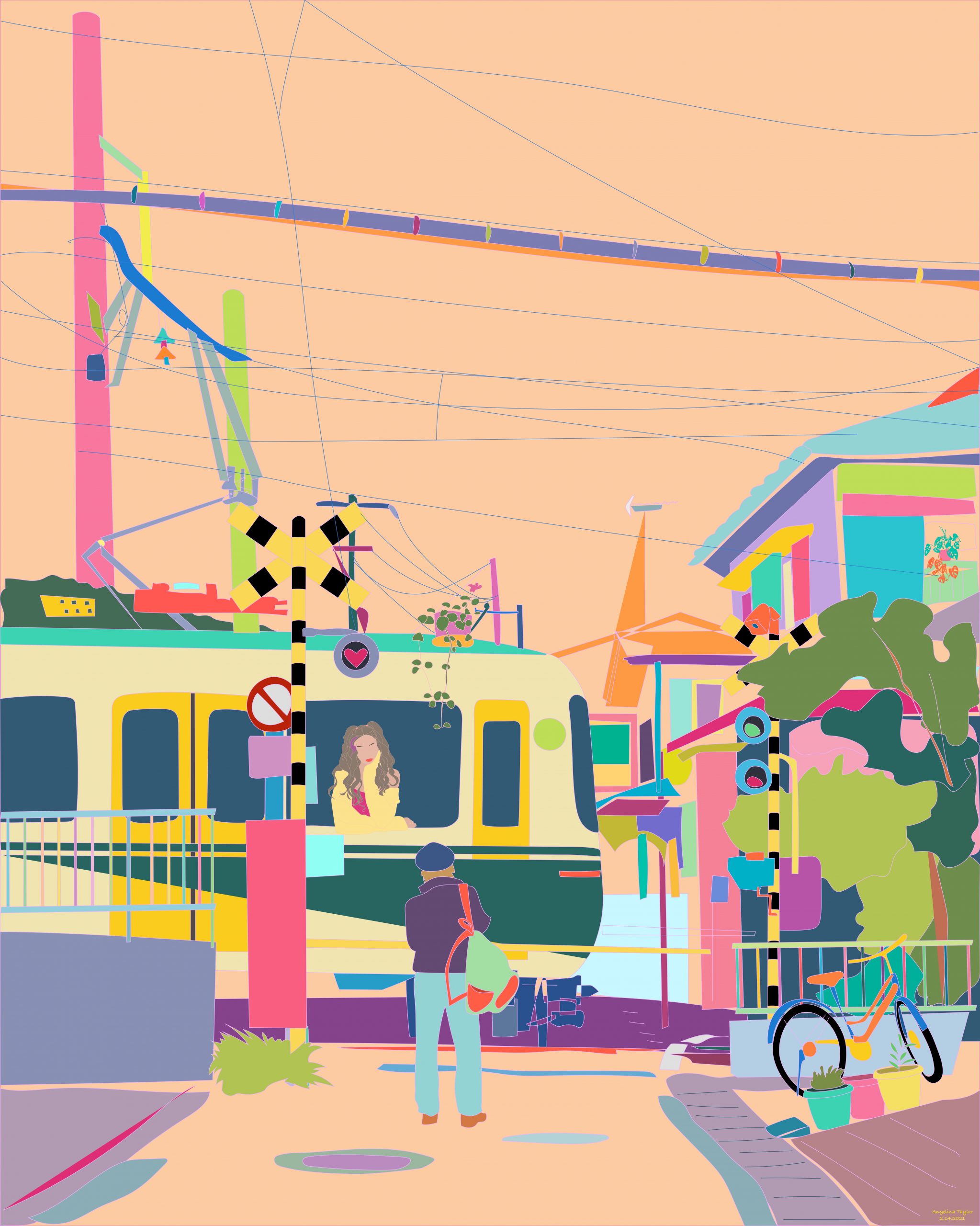 In a recent series, she digitally painted Chinese snacks like spring rolls, pan-fried dumplings, char siew bao, and egg tarts alongside a portrait of her children. “As many mixed kids haven’t gotten the chance to visit their parents’ hometowns, that inspired me to draw some of the signature snacks from their Asian roots. I hope one day they can experience all the delicious food in the world,” Taylor said of the piece. 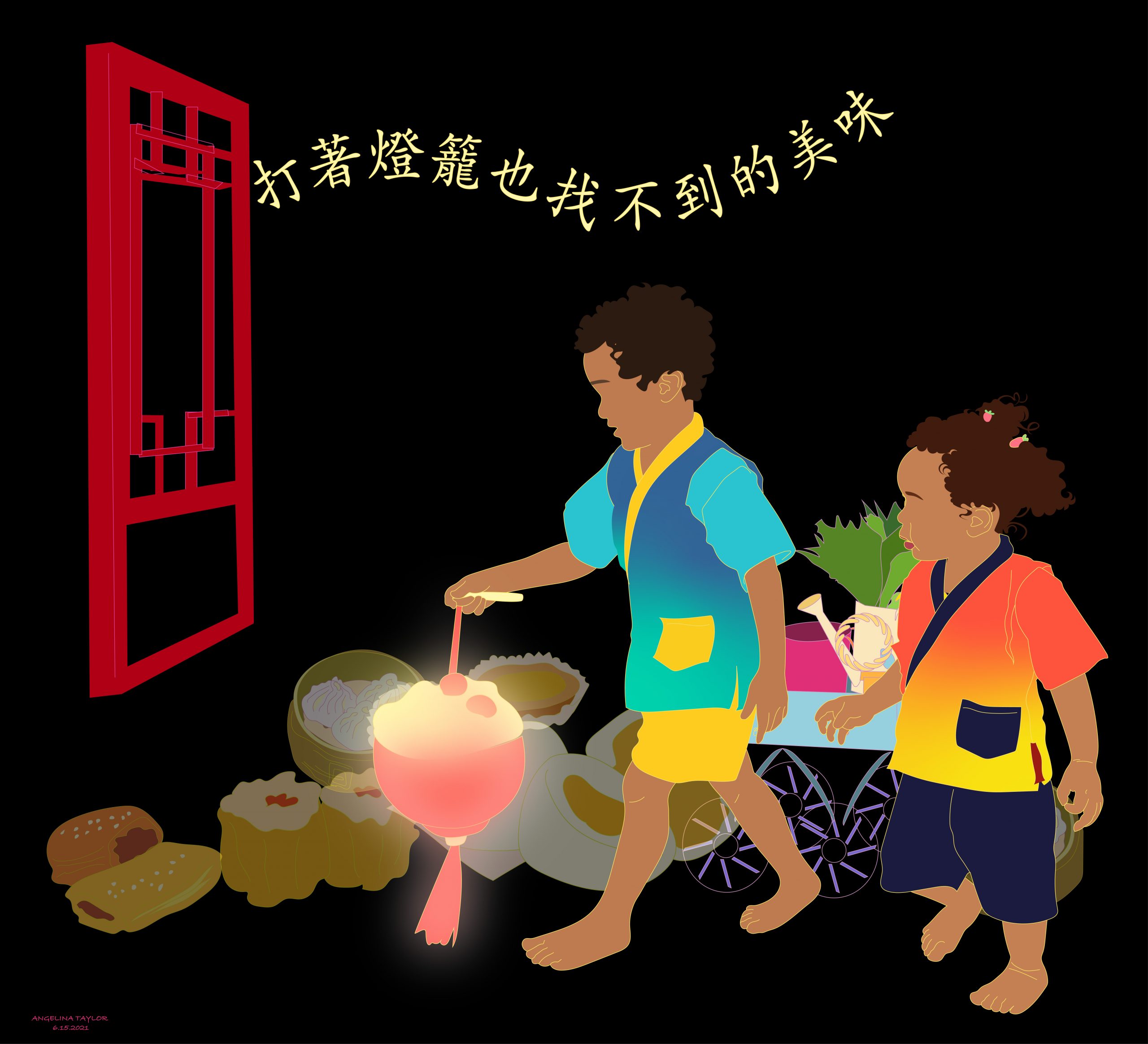 Her children have been a catalyst for her creative work over the years but having a child as she started studying at Sotheby’s was a challenge. “My body paid mentally, physically, everything—Having a kid is difficult,” she said. But that didn’t mean she wanted to stop being an artist. “I still wanted to create, and I wanted to use my hands to create something beautiful.” Her first digital painting was of her two children, Sky and Alita, with her mom in their living room.

In digital art, Taylor found a medium that was both convenient and fruitful. “Normally you have to buy a canvas and all kinds of oil paint, so doing it digitally saved me energy,” she said. The first piece she did, of her family, was on Adobe Illustrator with her laptop and mouse, but Taylor soon moved on to painting on the iPad with an Apple Pencil. “The first thing I wrote on my notebook was ‘I’m gonna draw the shit out of this iPad,’” she relayed. “I wrote a little letter to myself to remind myself to keep doing this.” And taking one look at her portfolio, it’s clear she has.

Even though warmth and emotion comes through in Taylor’s work, she says, “I don’t really like to draw facial expressions.” Rather than use facial cues to show emotion, in Taylor’s painting the emotion washes over the viewer from the color palette. “My point is the narrative, the storytelling, and what grabs your attention is more of more of the color palette.” It’s a subtlety that allows you to look at her art longer and take it all in.

A recent piece, Purpose, shows an undersea landscape where the human figure kneels in the corner, while giant lionfish-like creatures float through the water. Taylor has an obvious understanding of the human form, but she chooses not to center it in her work. Even her pieces that have human subjects, like the colorful Full Service, paints a human face with mauve eyes and lips and teal eyebrows. Her subjects are made up of the same palette as the background, prompting you to think about how our own understanding of color and aesthetics comes from the natural world around us. 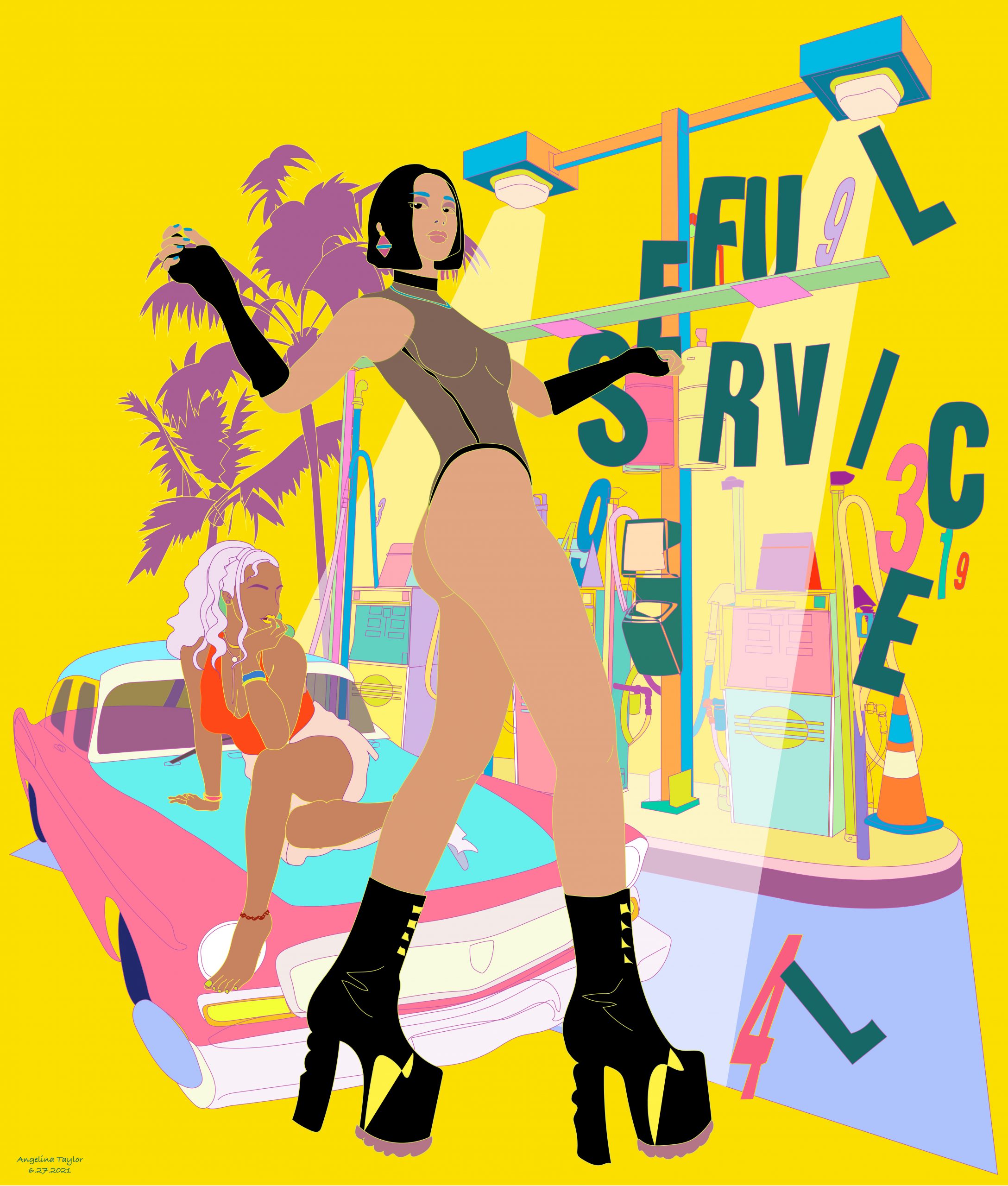 On the presence of memory in her paintings, Taylor was inspired by the cinematic presentation of time with glitches or muted palettes. “In the movies I’ve watched where people are trying to get back into time or memories there’s like a glitch or something cyber. It takes a second to go back. In that moment, the items and people are still themselves. But the color is somehow cut off, some are glitched, some are not as complete. In my artwork, the geometry represented is like memory glitched. It is not fully there, but they are there.” Taylor’s work shows the world through the subjective lens of human memory, something notoriously difficult to capture in visual art. Her paintings have a dreamlike quality to them, and the images draw you into her world.

“In my artwork, the geometry represented is like memory glitched. It is not fully there, but they are there.”

These days, she resides in Brooklyn with her two children and continues to paint her way through her own memory palace. On her website, she now offers commissions and sells prints, oil paintings, and even skate decks. No matter where she is on the globe, Taylor takes her artistic integrity and commitment to emotional intelligence with her.

Caitlin Sowers grew up outside of Pittsburgh, PA and received her Bachelor’s Degree in Fine Arts and Art Education. She was first exposed to street art when she saw Shepard Fairey’s solo show at the Andy Warhol Museum in 2009. A former high school teacher, she moved to New York in 2017 to pursue a Master’s Degree in Art Business and graduated from Sotheby’s Institute of Art in December 2018. Caitlin also loves fostering kittens, going to art openings, and spending time in Prospect Park. In addition to writing for UP, Caitlin leads tours of New York City’s subway art.