I once attended a bar mitzvah that featured an ice sculpture of the bar mitzvah boy skiing. The party was in an alabaster white room that made the pancake makeup on all the self-conscious twelve-year-old girls’ faces look ghoulish pink. I remember standing in front of the ice sculpture, transfixed by how a gawky preteen could be turned into something completely translucent and still. Whoever the sculptor was had captured him mid-ski, gripping one of his poles. This was the sort of excess I was an observer to for most of my adolescent life. As a scholarship student, I certainly didn’t grow up with access to it in the same way my prep school classmates did, but I could look at it and wonder what it would be like to be able to do whatever you wanted with little consequence

All this to say I could understand the cultural place fake heiress Anna Delvey was trying to occupy, because I, too, understood how much of wealth was only aesthetic. I love fake nails, When I got to art school, I found myself asking the question Why is everybody pretending to be poor? The proximity to capital that I’d once been so proud of became something I wasn’t supposed to talk about because it made me one of the people eligible for the guillotine in the proletarian revolution, which apparently was going to be led by Buffalo Exchange-wearing art students from Massachusetts. But I digress. We’re here to discuss Anna Delvey, née Sorokin, subject of Netflix’s Inventing Anna and one of the most popular New York Magazine pieces of all time.

Delvey is a deeply unsympathetic figure. I find her Instagram posts glib and distasteful and her treatment of Rachel Deloache Williams abhorrent. I wasted the electricity of many brain synapses being simultaneously disgusted and fascinated by her, and I’ve come to respect her uncompromisingness and her sense of humor. Who knows–maybe we’d be friends if we met. I’ve linked the NYMag piece above as a summary for those unfamiliar, because there’s a new foil in the Anna Delvey story: Delvey has decided she is now an artist, and had her opening show, “Allegedly,” at New York’s Public Hotel in May.

One of the central conflicts in contemporary fine arts is whether art is a proletarian pastime by “starving artists” in cramped apartments, or whether it’s a glamorous world of drinking at Art Basel and hanging Rothkos in minimalist penthouses. The issue then becomes that being a “starving artist” is now an aesthetic cultivated by college students and has become something of a luxury.

In many ways, suffering is the new capital, and the pristine galleries of SoHo are struggling to keep up with Bushwick’s burgeoning scene of suburbanites LARPing as dumpster diving hobos. Is being an artist about what you actually do or about how you look as you pretend to do it? 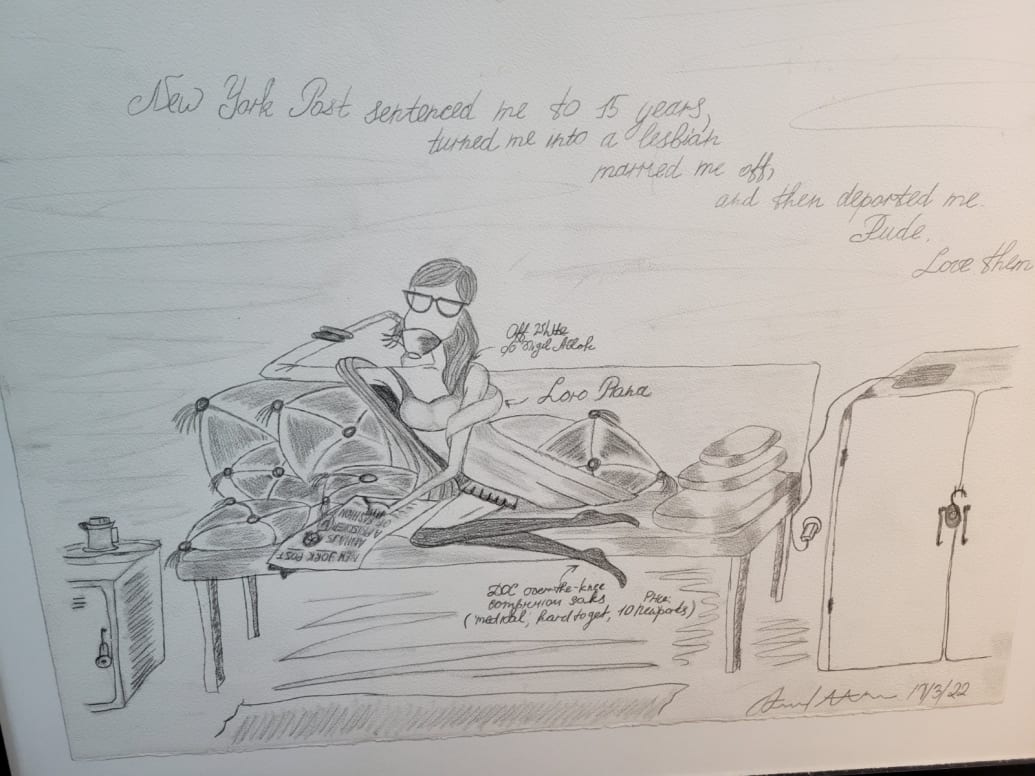 In many ways, suffering is the new capital, and the pristine galleries of SoHo are struggling to keep up with Bushwick’s burgeoning scene of suburbanites LARPing as dumpster diving hobos. Is being an artist about what you actually do or about how you look as you pretend to do it?

“Allegedly” was apparently more performance art than gallery opening, with drag queen Yuhua Hamasaki shouting “Look at me! I’m a masterpiece! I am Anna!” to hype people up. The pieces displayed in the show were mostly done in pen during her time in an ICE detention center, and I would be remiss if I didn’t analyze the actual art rather than philosophize about the artist. 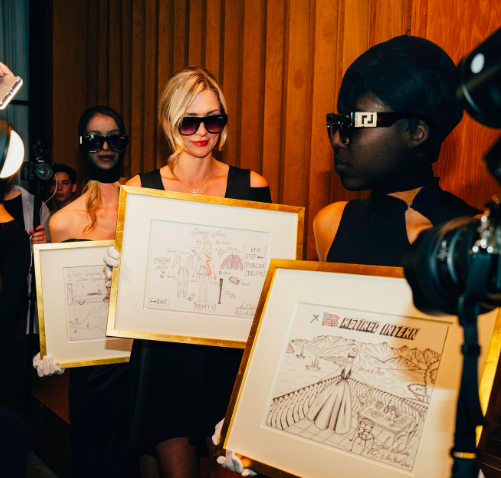 Many of her sketches feature her wearing “prison socks,” which in one piece she notes as “DOC over-the-knee compression socks, medical, hard to get, price: 10 Newports.” In one representation of herself sitting in a beach chair, she is reading Normal People by Sally Rooney in one of the instances where her sense of humor landed for me—she puts an arrow pointing at the book with the words “Looking for tips,” implying she doesn’t know how to be normal. 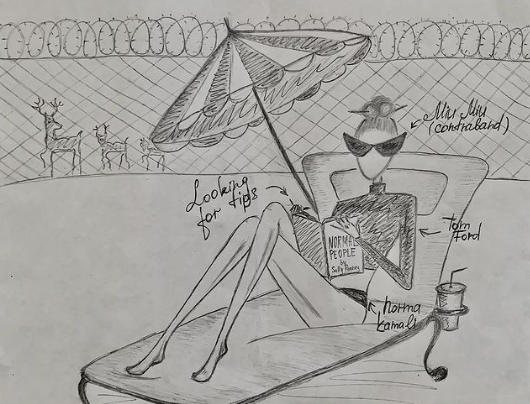 Curiously, her caricature of herself in all of her paintings has glasses on but doesn’t have a face. The sketch lines are rough and when color does appear, it’s usually red. Delvey put an impressive amount of work into reproducing a New York Times spread and renaming it The Delvey Crimes, complete with a fake subheader reading “Instead of Getting a Job, She Was Busy Getting a Blowout.” Begrudgingly, I like her faceless, mannequin-like motif, but I can’t say I’d pay $500,000 for the pieces. 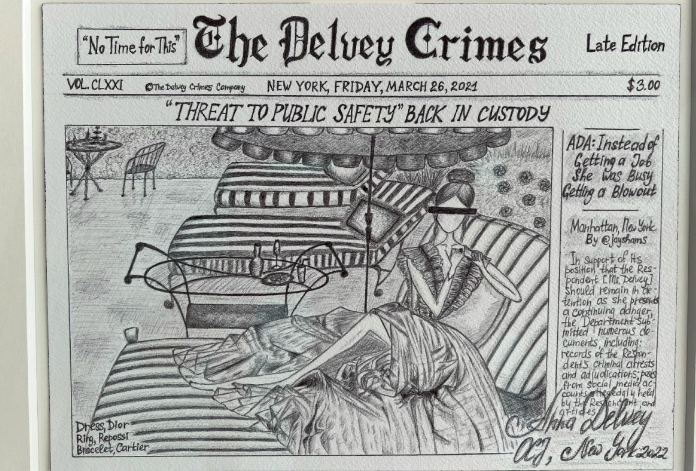 She’s spoon-feeding the media class thinkpiece fodder and appears to be delighting as we fall for it. Rolling Stone called her show “the death of culture.”

Delvey’s art packs the least punch when it tries to be altruistic. She has attempted to cash in on the capital of suffering by turning her case into one about immigration reform, which had me choking back laughter looking at a canvas with the caption “White privilege application: denied.” She’s spoon-feeding the media class thinkpiece fodder and appears to be delighting as we fall for it. Rolling Stone called her show “the death of culture.” (In a true deep cut for us native New Yorkers who went to art school, in that piece EJ Dickson describes the audience of Delvey’s show as “Marymount kids who could not get into Tisch, and aspiring influencers who would later lobby to fuck Cousin Greg at Ray’s down the street.” The level of inside baseball in those references is actually astounding). Delvey’s fans are so intent on finding depth in what is, to my eyes, a somewhat pathetic story about a girl who grew up, as I did, observing wealth while being unable to truly touch it and deeply yearning for acceptance.

In the zeitgeist of post-irony that Delvey straddles, the worst thing you can be is earnest. Caring, really caring, is uncool. Delvey is an un-wealthy person pretending to be wealthy pretending to be un-wealthy. Just being fake isn’t enough. Everyone’s fake. You have to be fake and relish in it so much that it almost seems refreshing in a world of fake people pretending to be real.

Every detail I learn about this show is stranger. As of May 2022, Delvey had not paid a co-curator, Julia Morrison, for the “Free Anna” group show back in March. Delvey then reportedly said Morrison’s claims were unjustified extortion. (Did you know Julia Morrison is also known for creating an NFT of Armie Hammer’s sexts?) Alfredo Martinez, who recreated Delvey’s prison sketches in order to display them in the show, went to prison himself in the 2000s for forging Jean-Michel Basquiat pieces. A joking tweet by Insider‘s Jacob Shamsian about Delvey owning a law firm was reported as if it were legitimate by several different news outlets in reviews of the show. “Allegedly” is a is a fitting title for the show, as within this paragraph alone there are at least three or four allegations hidden in the hyperlinks. 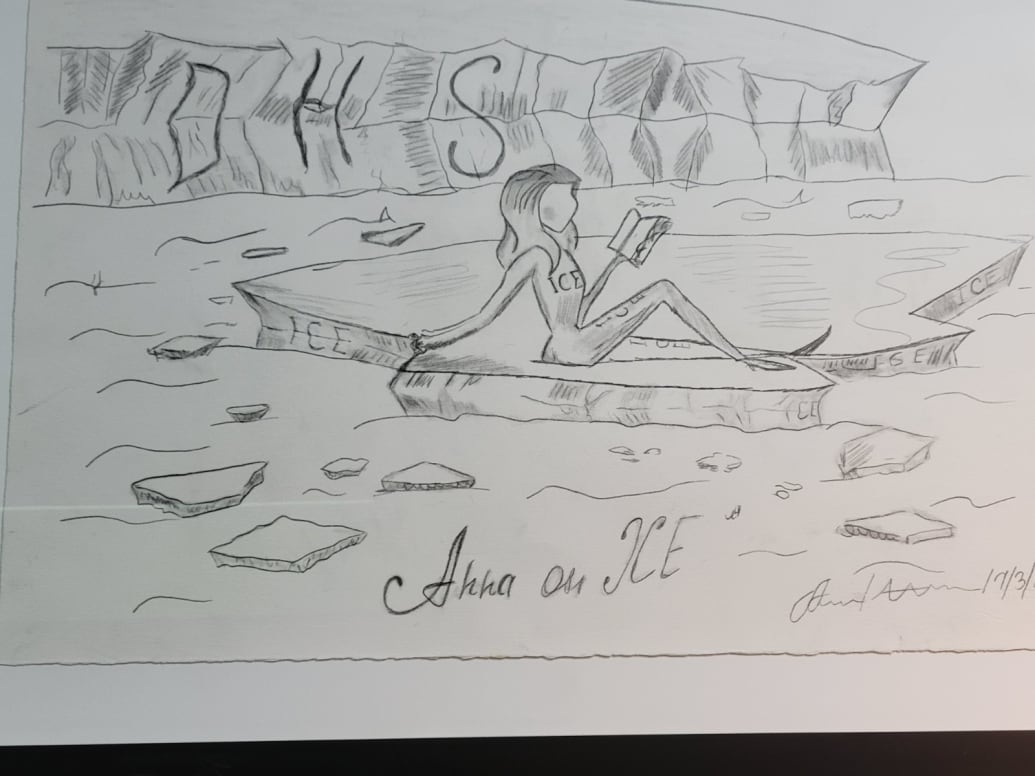 Many millennial girls like myself and Delvey grew up with Marina Diamandis’s landmark album Electra Heart, a power pop examination of female archetypes. One of the album’s biggest hits, “Teen Idle,” which I blasted on my iPod Touch while writing online fanfiction about my favorite Stephen King characters developing intimate relationships I thought I was too ugly to have, features the line: “I want to stay inside all day / I want the world to go away / I want to blood, guts, and chocolate cake / I want to be a real fake.” It was the 2010s, the height of Delvey’s scam. Maybe in 2013 Electra Heart was on her stereo, too, while she slept alone in a car after her wealthy friends at SoHo House refused to offer her their couch.

Delvey is currently working on a new collection of pieces and is in talks with several fashion brands for collaborations. She stated “I also hope to be free really soon so I can have access to new tools to create my art, make pieces in different sizes and experiment with texture and materials.”