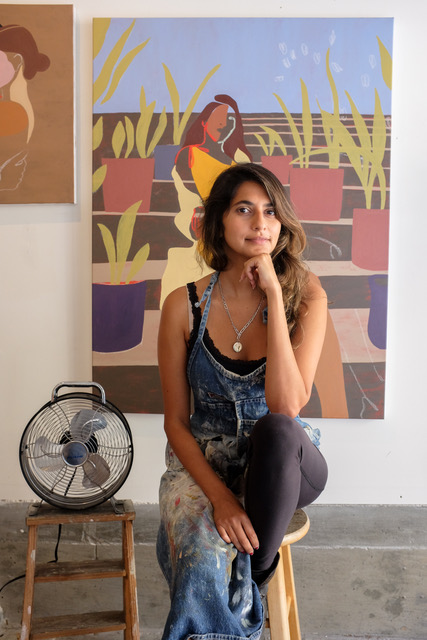 Following her sold out 2020 San Francisco exhibition ‘Note to Self’, Anoushka presents a new series of intimate portraits composed of oil and oil pastel on canvas.  In the face of recent adversity and a global pandemic, Mirchandani invites viewers into the inner sanctum of her psyche where she engages in deep self-reflection on establishing boundaries of renewed closeness with the self, with others and her surrounding environment.

Mirchandani’s art practice stems from memories of her childhood in India and her personal discoveries and transition to adulthood in the United States as an immigrant woman. As a teenager, she turned to a visual language of shapes and forms to express her inner dialogue on navigating a patchwork identity and asserting herself as a female visual artist in a male-dominated industry.

The exhibition features a selection of minimalistic, textural portraits in a signature warm colour palette. They show intimate moments between figures, or scenes of contented aloneness; Images which we can all recognise from our own lives over recent years. Their familiarity draws us into private, unguarded moments, persuading us to dissolve our boundaries and merge into the blues, oranges and purples, mirrored by the embrace pictured between the figures.

Her use of negative space in the works not only allows the viewer to focus on the details of the work, but also reveals the scenes to be just anonymous enough that one can place themselves within them; Whether that be reclining lazily on a deckchair, or tenderly holding a loved one.

Mirchandani shows that intimacy can mean more than just romantic longing. Not only does she depict the close relationships we forge for ourselves, but she encourages the audience to nurture the intimacy cultivated during these fluctuating periods of isolation and bring forth the displaced sense of kinship into the world once again, as each of us tentatively re-enter society with renewed hope, freedom and desire to connect with one another.

Although the works include portraits inspired by Mirchandani’s friends and family, many of the works are self portraits, revealing self-reflection, personal growth, moments of respite, and coming face to face with her own history, nature and being.

In an extension of previous bodies of work which placed figures on flat backgrounds suspended in time and space, ‘Just Between Us’ places figures in distinctive domestic settings such as a garden or living room. In addition, the symbology of the physical spaces that include native Californian foliage and birds like the Indian bulbul, echo of ancestral honoration while simultaneously offering a glimpse into her present life in San Francisco.

How do Anoushka’s works encourage you to lean into transition? What people or spaces bring you comfort, safety and a sense of home?