This is Part Three of a series on the arts in Denver, CO. Read previous articles on Redline and The Temple, Casey Kawaguchi, and Chris Haven at the provided links.

Birdseed Collective founder and executive director Anthony Garcia, Sr is as committed to being a mover and a shaker as he is to being an artist. His art, however, speaks for itself: the rich colors and textures of his murals across Denver, Colorado immediately drew my eye to them when I first passed them in one of Denver’s many art-filled alleyways. But his focus is not making art for wealthy collectors or camera-wielding Instagram art bloggers. As he told me, he resists categorization because his art is ultimately for his local community. 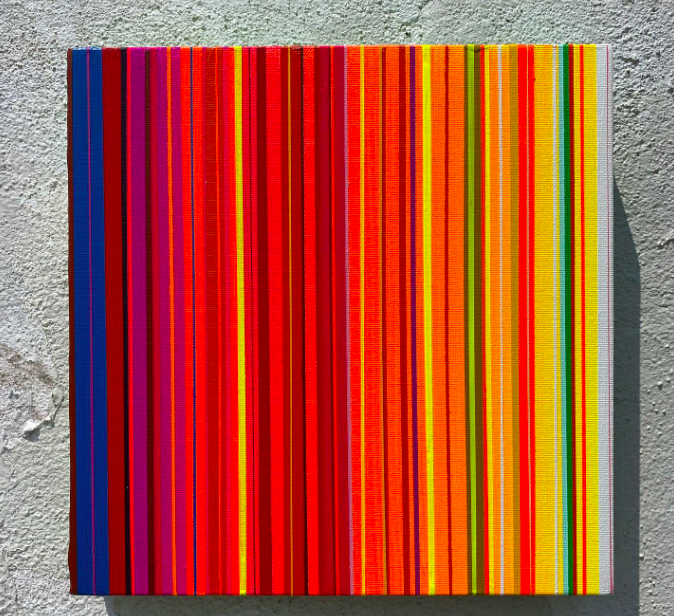 Birdseed Collective, which Garcia, Sr founded around twelve years ago, specializes in connecting with lower-income communities in Denver and engaging with their needs. “I wanted a group where we could take more ownership of the things we made and get to keep the art in our community,” he said. Currently, Birdseed Collective programs out of Globeville Recreation Center where it facilitates health and wellness programs as well as youth fine arts classes, all in the neighborhood where Garcia, Sr raised his own children. 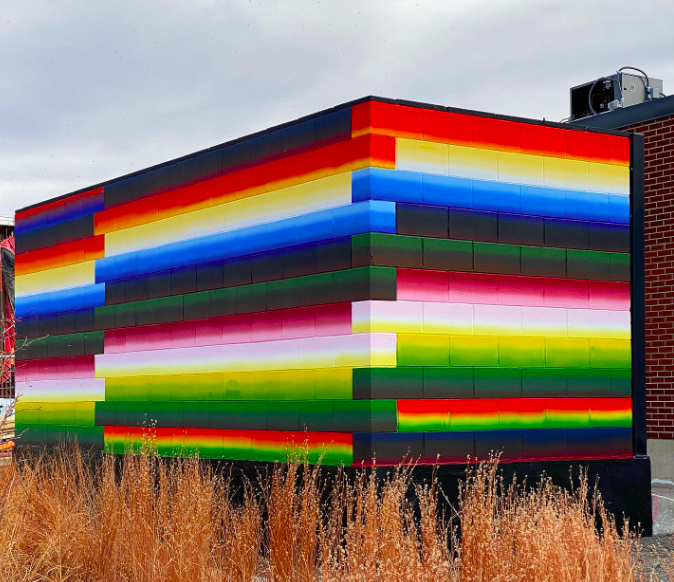 “I wanted a group where we could take more ownership of the things we made and get to keep the art in our community.”

Having grown up supported by local arts nonprofits in my own underfunded neighborhood where the creative arts were considered a pastime for wealthier people, Birdseed Collective’s message personally resonated with me. As an art journalist, I often encounter elite glitterati types, but that has never felt real to me. Garcia, Sr expressed a similar opinion. “There’s always a certain group of people that are out looking for street art, so when we do paint, we try to keep it subtle,” he said. 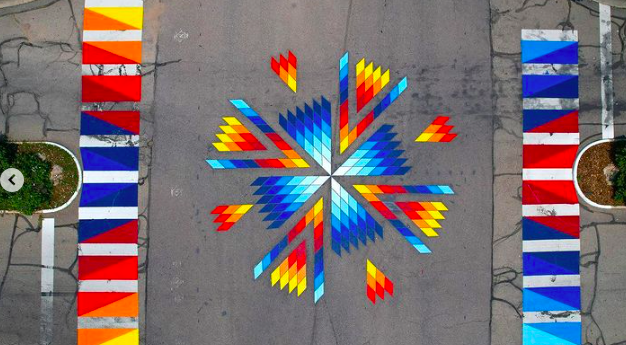 “There’s always a certain group of people that are out looking for street art, so when we do paint, we try to keep it subtle,” he said.

That “certain type” of people often includes those who flock to trendy-chique neighborhoods from suburban liberal arts colleges. It’s people looking for art as a commodity, and while they may have altruistic motives, their presence turns neighborhoods where real people live into personal museums and playgrounds—I explored this idea in an earlier interview with Harlem-based artist Early Riser, a native New Yorker like me. All of the artists I met in Denver were Denver locals, and the experience of making art in your hometown can be one that leaves you feeling constantly on the defensive for the integrity your community. 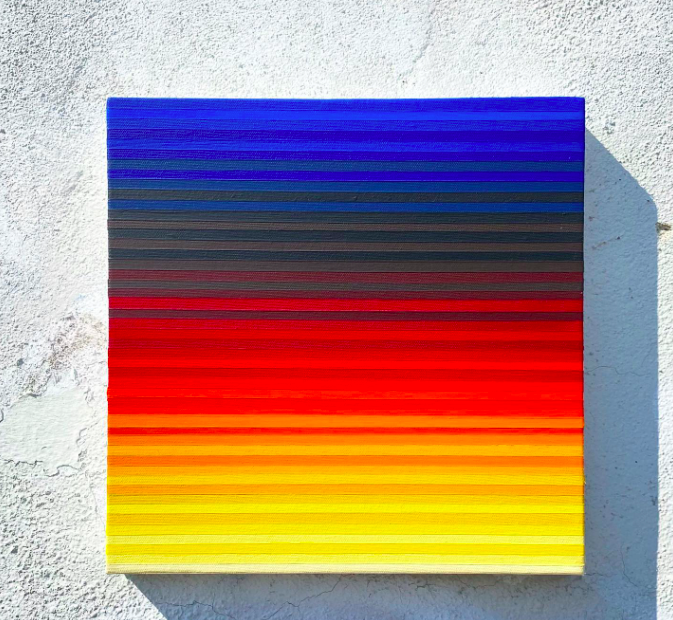 For Garcia, Sr, the subtlety of his art is part of what gives it its power. Its aesthetic basis is in the zarape blanket, a staple of Latin American culture, which Garcia, Sr described as a “smooth blanket made of hard lines.” The contrast between the smooth flow of the blanket and the geometric dynamism of the lines makes his murals impossible to look away from. His canvases use full spectrums of color but have clear, sharp lines between each change in shade. They show an incredible amount of precision and care, the same precision of care Garcia, Sr displays in his activism and community outreach.

I first encountered Garcia, Sr’s work at RedLine, my first stop in my adventure in Denver. For their show Cromatic Cognitions: Rhythm Reboot, Garcia installed a floor-to-ceiling piece entitled “People of the Sun,” which is “reflects the complicated relationship that oftentimes exists when members of economically disadvantaged communities obtain wealth.”. It’s a nuanced subject that requires an artist who can master subtlety to tackle it. The piece also touches on the “ancestral alignment with gold that refers to royalty, power, and self-adornment,” but aims to take a contemporary look at how that ancestral connection is now a symbol of status. It features an indigo background starkly contrasted with vertical braided gold lines resembling chains that seem to undulate in front of the viewer’s eyes. It’s a mesmerizing piece of work, and the hypnotic quality it has speaks to its theme of how the allure of wealth hides its complications. 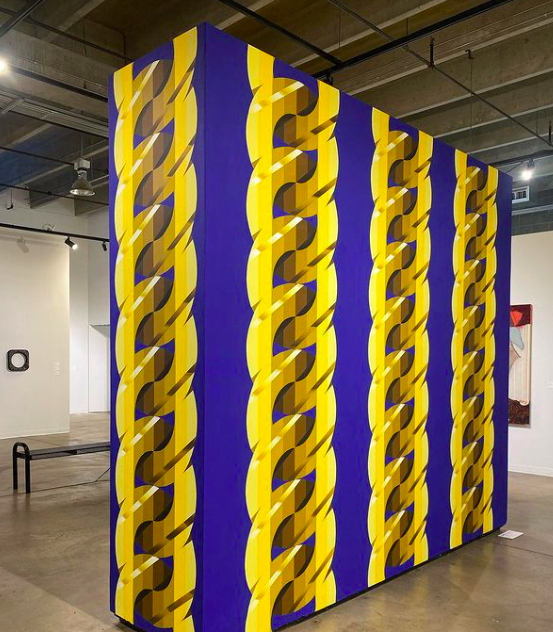 For their show Cromatic Cognitions: Rhythm Reboot, Garcia installed a floor-to-ceiling piece entitled “People of the Sun,” which is “reflects the complicated relationship that oftentimes exists when members of economically disadvantaged communities obtain wealth.”.

Garcia, Sr’s mother, an activist, instilled the value of community outreach in him, and his grandmother, who expressed herself through art, exposed him to the power of art at an early age. Throughout the early years of his career, he was involved with Art Street, a group of local students doing public art projects, and worked with the Center for Visual Arts. That combination of influences has evolved into building a network that serves not just local youth but also up and coming artists who might not have the time or bandwidth to handle things like where to find grants or paying art jobs.

Many of Denver’s artists at ILA, Dateline, Redline, The Temple, and its public art spaces such as RiNo Art Park tackle class and its complexities with a frankness I haven’t encountered elsewhere. “In our community, we didn’t have the chance to see outside of our box because we were always just trying to pay our bills,” Garcia, Sr said. “Living check-to-check, you aren’t really able to make art. I try to ease that tension and fill in that gap.” 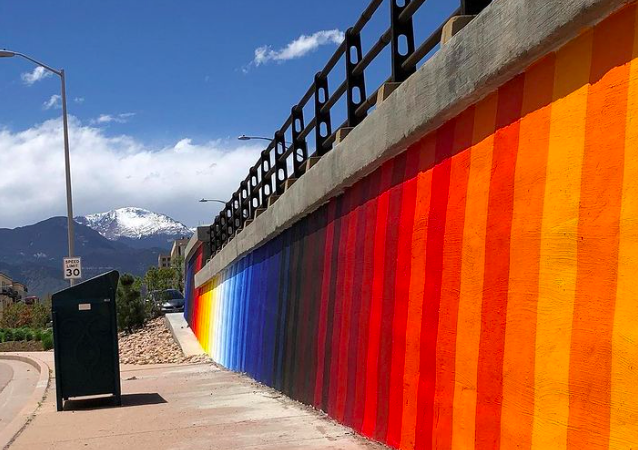 “Living check-to-check, you aren’t really able to make art. I try to ease that tension and fill in that gap.”

More than anything, Garcia, Sr’s work commands respect from viewers and forces them to ask difficult questions about their own perception. His willingness to leave things up to interpretation allows the art to take on a life on his own. “I feel very lucky to have had success as an artist and to have a platform,” he said. Through his art, he has undoubtedly made stellar use of that platform.

In the upcoming final installment of my Denver art series, I’ll connect the dots of ILA Gallery, the surprising connections between the Miami art scene and the Denver art scene, and the story of Lorenzo Talcott, who was instrumental in directing me to the right people to talk to.

For those reading in Denver, Birdseed Collective just announced a summer series of free community events featuring local musicians, student performances, and free to the public food in August. Additionally, Birdseed Collective hosts 1of1 Magazine, a Denver-based arts publication, Alto Gallery, its own community-owned and operated art gallery in RiNo Art Park, and a number of different programs at Globeville Center including free food, groups for seniors, and youth sports. Additionally, in 2022, Garcia, Sr was selected as a Livingston Fellow with the Bonfils-Stanton Foundation, a well-deserved celebration of his wide-ranging achievements.