Somewhere between the poles of strictly illegal graffiti and corporate-driven private commissions lies a third path: publicly-sanctioned art. ArtBridge, an innovative nonprofit founded by Rodney Durso and led by Executive Director Stephen Pierson, bridges this gap. This organization pulls from the best of both worlds, utilizing private access to public canvasses provided by New York City’s massive stretches of construction in their mission to create fresh opportunities for artists. In the process, they advocate for the fair treatment of artists as professionals rather than hobbyists, and beautify the city for all its inhabitants.

ArtBridge’s mission statement expresses their intention to transform the overbearing scaffolding that masks the city’s face “into a canvas for local, emerging artists.” Through its work, the organization creates “exhibitions [which] result in incredible exposure for artists, while artfully reinvigorating our urban landscape.” The majority of ArtBridge’s work focuses on New York City’s five boroughs. This is due not only to the city’s rich arts community, but also their extensive partnerships with city agencies and developers, which allow them to conduct large-scale projects legally. In addition, ArtBridge operated in L’Aquila, Italy to beautify and unify the city in the wake of a devastating 2016 earthquake. The project eventually became the Italian nonprofit Off Site Art (OSA) which continually partners with ArtBridge to create exhibitions.

It was at this point in his career that he realized “getting your work seen is basically impossible,” and that the industry is “hermetically sealed.”

Durso began his career in graphic design, founding the advertising and branding agency Stormhouse Partners. “At one point, I got burnt out,” he says, so he closed down the company in 2006. Seeking a career as a visual artist, he started painting in a small space on West 26th Street. It was at this point in his career that he realized “getting your work seen is basically impossible,” and that the industry is “hermetically sealed.” A natural-born entrepreneur, Durso had to wonder, what’s the solution?

It wasn’t until his residence, London Terrace Gardens, underwent a two year-long facade repointing that Durso found his coveted answer. He envisioned the scaffolding and sidewalk bridges as blank canvases, and approached the owners of the building with an idea to use the space for an open air gallery. He not only received approval, but was also granted a $5,000 budget. From there, Durso hired curators for the space and put out a call for art. He built the show, generating “unprecedented exposure” for previously unseen artists. Then-emerging artists like Amanda Valdez were able to parlay their participation into opportunities to sell more work, securing future gallery shows in venues they had previously considered out of reach.

“I thought it was a one off idea,” Durso says, but the reception was so positive that it encouraged him to explore further shows. He soon created ArtBridge as a formal entity. His second exhibition took place on the construction site of Barclay’s Center, which at the time was just “a hole in the ground” with a fence surrounding it. ArtBridge received a budget from the project developer, Forest City Ratner, for $50,000, ten times the amount allotted for his first endeavor. His work as a successful business owner and marketing executive helped to build this new path. He had already fostered a rich network of connections. Durso explains that these varying industries in New York do not operate in isolation, rather that “all the visual worlds are interconnected.”

ArtBridge’s Barclay’s Exhibition took place amongst a controversial transition. Durso notes that Barclay’s Center “displaced a lot of lower class people and artists.” He claims that this project helped temper the tone of contention brewing in the neighborhood by creating something beautiful for everyone to enjoy. Forest City Ratner was also “totally hands off.” That freedom not only placed power back into the hands of the community, but also allowed the project to flourish.

In order to complete their large-scale projects, ArtBridge must take measures to secure legality through the Department of Buildings, which controls the scaffolding and sidewalk bridges associated with construction projects. Durso says that in the organization’s early days, the Bloomberg Administration approved of their initiatives, which were supported by the Mayor’s First Deputy, Patti Harris. ArtBridge operated with the blessing of the administration’s Urban Canvas project. However, the program dissolved when Bloomberg ceded control to the De Blasio administration.

Since the dissolution of Urban Canvas, ArtBridge has had to keep their work “under the radar” according to Durso. Without it, “there was no legal mechanism for us to do our big outdoor projects.” In order to circumvent legal issues, the organization has opted to put art on fencing instead of scaffolding. Such projects have unfolded in the Bronx and Brooklyn’s Prospect Park, though they do not fall under the auspices of the DoB. Still, Durso says that the organization has had a lot of support from City Council members like Leticia James. On November 28, 2018, ArtBridge announced that it was one of two New York institutions selected to enact City Canvas, a new program run by the Department of Cultural Affairs under Mayor De Blasio, that “will allow for the temporary installation of art on NYC’s 300 miles of construction sheds and fencing.”

Executive Director Stephen Pierson states that money is the largest obstacle he faces in running the organization. Not only do they pay rent, but they also pay the artists who participate in their projects. Pierson explains that it’s his job to figure out “how can we not go broke while ensuring we pay artist appropriately.” In their efforts to secure adequate funding, ArtBridge boasts an annual operating budget of $300,000. This is generated by public grants, project revenue paid by developers employing ArtBridge’s services, and fundraising events. ArtBridge also works with Business Improvement Districts like Downtown Brooklyn Partnership and the Long Island City Partnership to provide place making beauty for their respective neighborhoods.

Durso asserts that ArtBridge is unique because its model establishes an “everybody wins situation,” aiming to benefit developers, artists, and residents. Pierson further explains “we exist for two reasons: to improve neighborhoods and provide exposure for emerging artists.” Not only do their shows provide very public spaces for undiscovered artists to exhibit their work, but ArtBridge also enlists top-tier curators from renowned sources like the Guggenheim, Sotheby’s and Brooklyn Museum of Art to put together their exhibitions. This gives artists multi-faceted exposure, while generating a lot of excitement as they foster an atmosphere showcasing their craft.

By striving to properly compensate artists, ArtBridge destroys the notion that exposure proves an effective placeholder for actual pay.

By striving to properly compensate artists, ArtBridge destroys the notion that exposure proves an effective placeholder for actual pay. “Exposure is a very good thing,” Pierson says, “but [it] should augment fair pay, not substitute it. First and foremost, artists need to be able to pay their rent. We always meet or exceed the payment standards set by W.A.G.E. As a small, underfunded nonprofit, ArtBridge won’t make artists rich. But hopefully we’re part of a fabric of like-minded organizations that help to shift expectations.” Working Artists and the Greater Economy, also known as W.A.G.E., is a New York-based activist organization founded in 2008, whose mission is to “[establish] sustainable economic relationships between artists and the institutions that contract our labor, and [introduce] mechanisms for self-regulation into the art field that collectively bring about a more equitable distribution of its economy.”

ArtBridge also takes careful measures to contribute to the neighborhoods they work in. They monitor the sites to prevent tagging, though Pierson acknowledges “tagging is simply part of the world, unfortunately.” Furthermore, they utilize “artists with neighborhood ties and reputations” to help facilitate a significant reduction in tagging. Since the announcement of the Department of Cultural Affairs’ new initiative, ArtBridge has been gearing up for an array of new projects, and is looking for street artists to participate on a rolling basis. They will be putting up new sites every two months for the two-year period the project is slated to last. For artists interested in working with the organization, Pierson states they are not just looking for a strong Instagram presence, but artists who have “distinct art and care for the surrounding community. How will your art effect the people who see it?” In addition, Pierson acknowledges that city sponsorship brings about a measure of censorship. “We want to be interesting and provocative, but there are constraints.” The secret lies in finding a balance, and Pierson says, “I think a lot of street artists are good at that.”

Both Durso and Pierson are hopeful for the organization’s future, especially in the wake of the City Canvas announcement. “My hope is that we get to work with the city,” Durso said. While the initiative was still pending, “this could be our biggest year yet.” In doing so, they will return to their large-scale projects, tackling the roughly 300 miles of sidewalk bridges smothering New York. “This is a big moment for us, we’ve been fighting for this program for about four years.” The initiative will allow ArtBridge “free range to put up art on any scaffolding around the city.” Pierson continues to explain that ArtBridge is at its best in partnerships with other entities and organizations, and that “we all succeed when we’re willing to work together.” Though Durso says they haven’t had the manpower or money to expand their European efforts yet, that avenue is also on the table for the future.

In a concrete jungle with a notable lack of foliage, visual fauna makes day to day life worth living.

Despite the corporate connections that make their work possible, and their focus on helping artists find a financially sustainable future, ArtBridge finds its ethos in valuing the importance of art. “I took this role because I believe in public art, and artists’ abilities to change New York City for the better,” Pierson asserted. In a concrete jungle with a notable lack of foliage, visual fauna makes day to day life worth living. While ArtBridge’s leadership finds their motivation in humanitarian rather than monetary principles, their focus towards transitioning to a mindset that artists should be compensated distinguishes their organization from the rest of the industry. In doing so, they blur the line between money-minded corporate interests and the selfless artists who give themselves over to the street simply for the pure joy of creating. 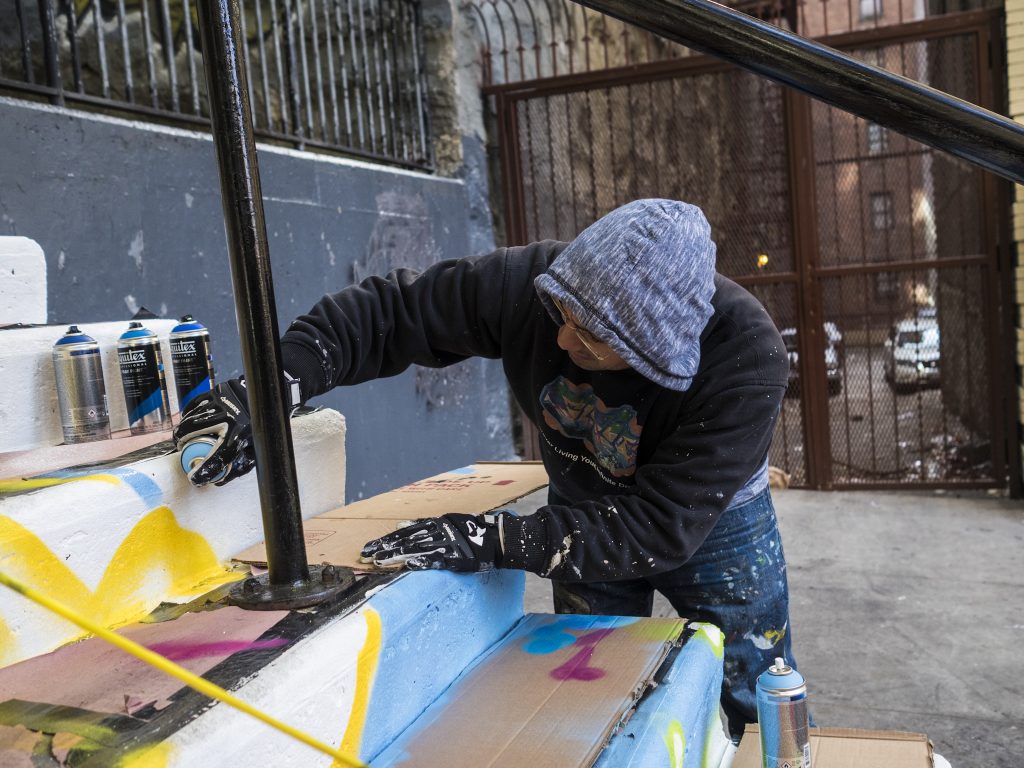 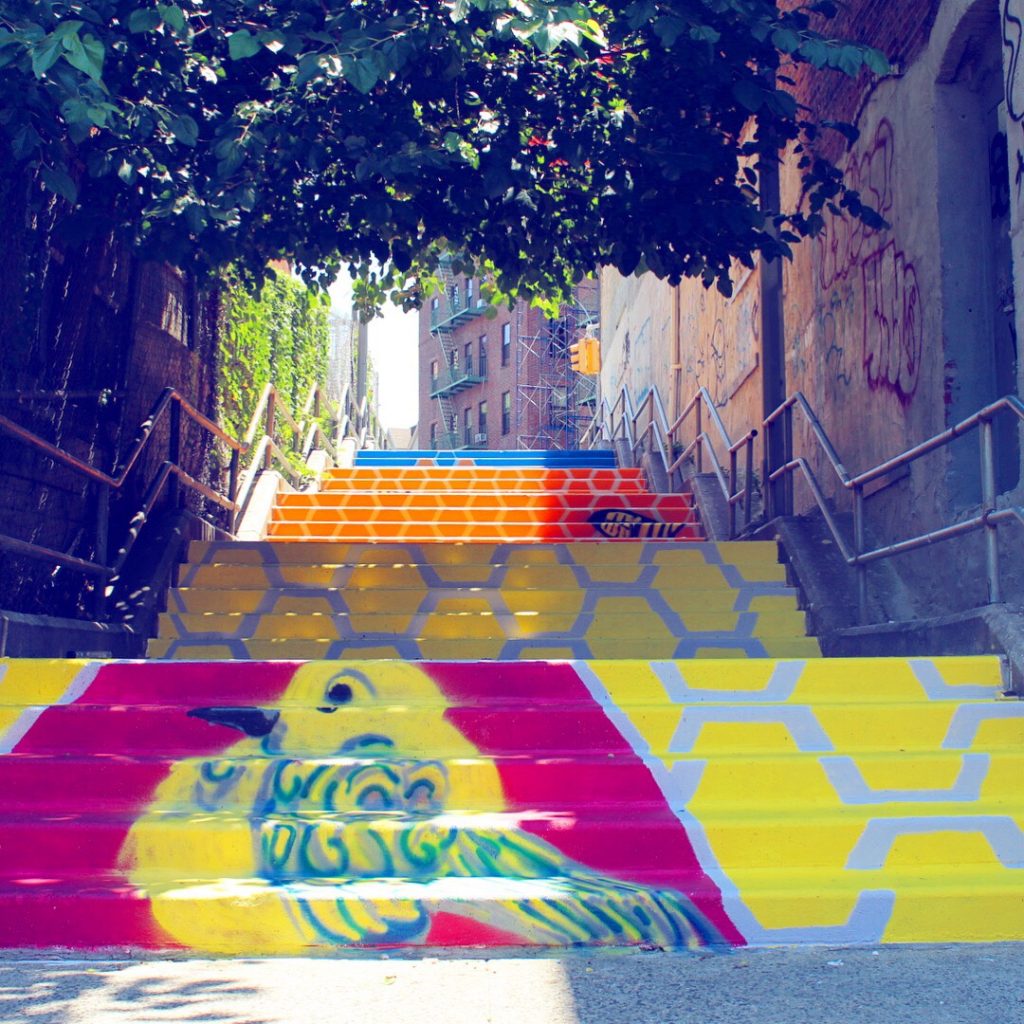 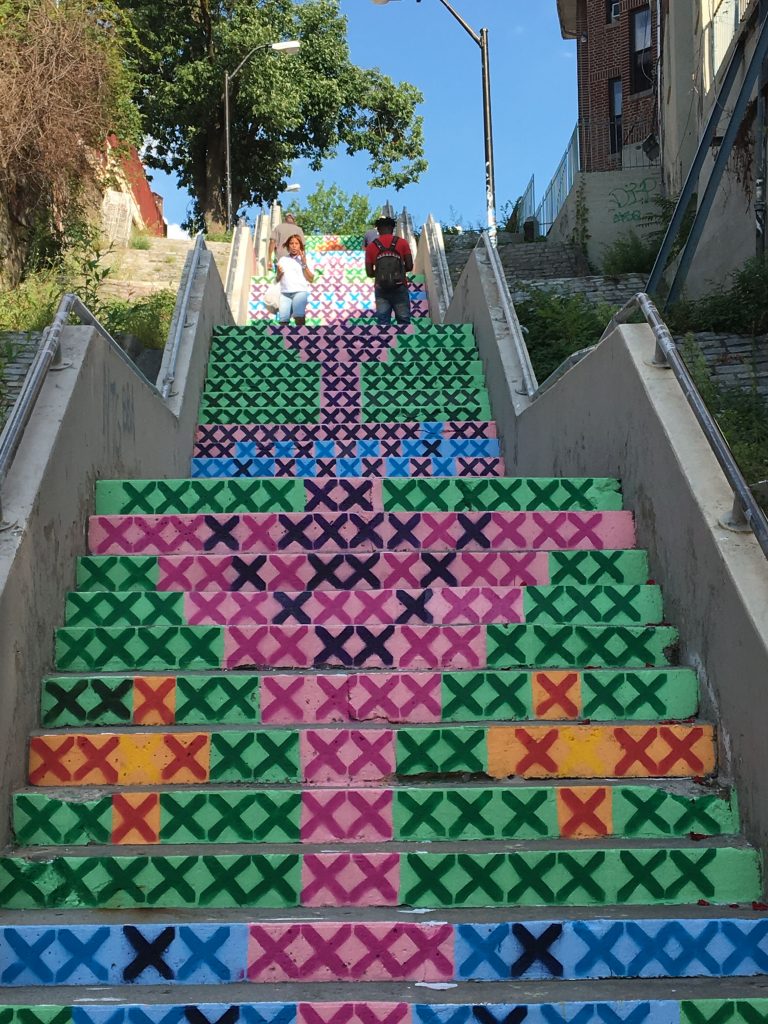 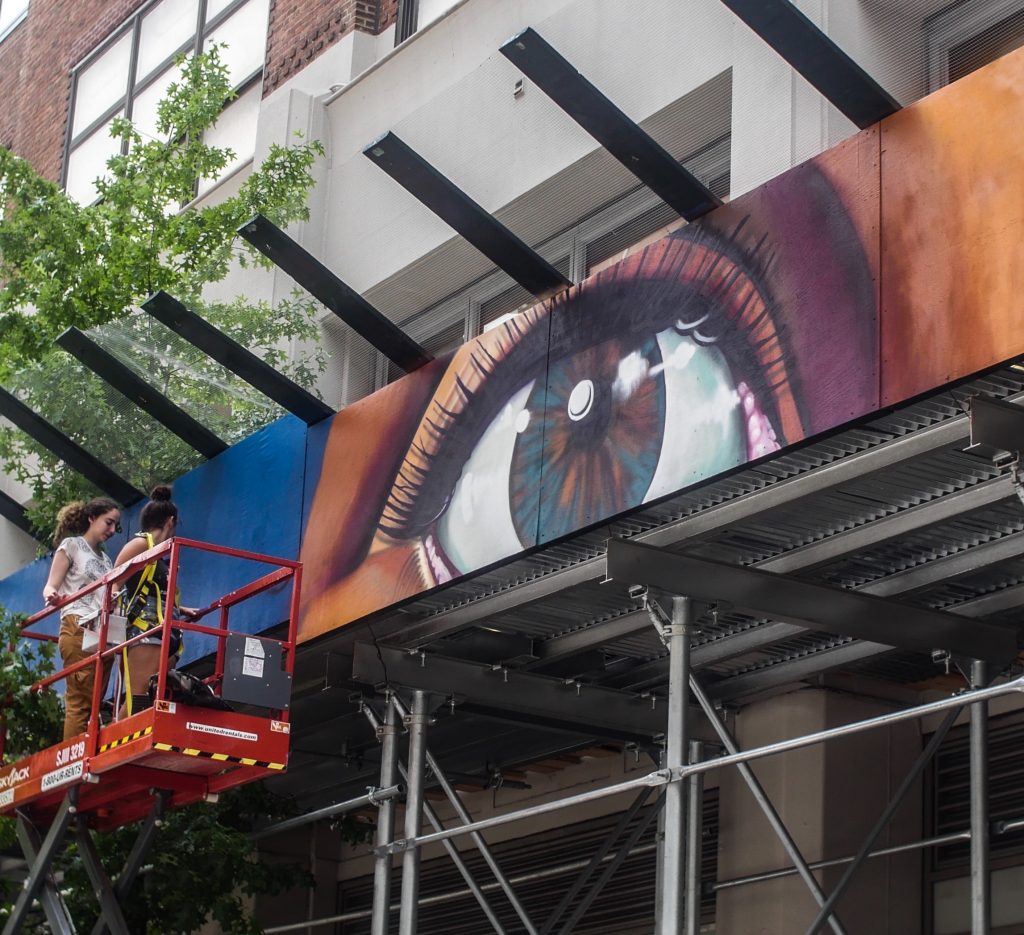 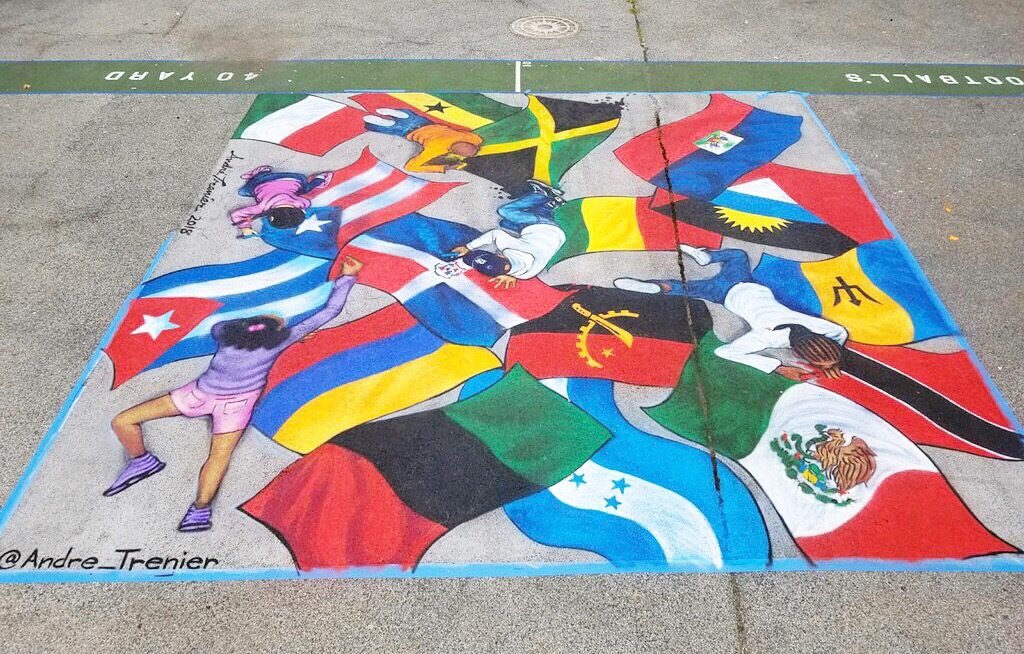 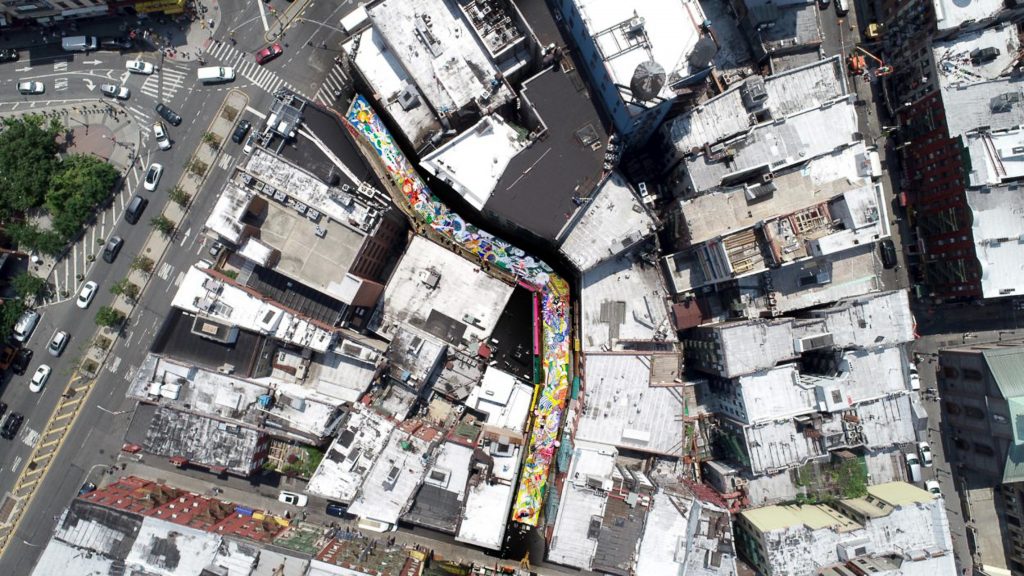