Earlier this year on May 23rd, Keith ‘Baston’ Aronowitz died at the age of sixty. As a creator, he worked in filmmaking his whole life, alongside a career as an editor for the ABC News Network among other positions, in addition to his Instagram persona Baston 717 and his identity as a visual artist, Baston 714. He is survived by his wife Pilar, their son Sean, and the memories and impact he made on the NYC street art community.

Since hearing the news, I’ve been thinking of how to write this tribute, though I’ve struggled to put the words together. I’ve never been great at processing grief. While I can’t claim that Keith and I were incredibly close, he was a colleague and friend I held in high regard. I felt compelled to pay tribute to him in my own way, and so I’ve sketched together a few of my remembrances with him.

We first met sometime around June 2017, at a contributor meeting for SOLD. This was when I was still fresh in the art world, and I remember being surrounded by people who seemed much more tapped in to the scene than I was. I was eager to learn but felt awkward and out-of-place. Keith was one of the few people at the meeting that made an effort to talk with me.

Before UP, SOLD was the only street art publication in town, and it served as the gathering place for many of the writers, photographers, and enthusiasts that had taken on the task of documenting the burgeoning street art renaissance. Keith had taken in interest in the medium and began a series of short-films on local artists in 2016. Around the time I joined SOLD, Keith had also begun to explore his own artistic identity, adopting the moniker Baston 714.

I remember his excitement when he told the SOLD crew about his first solo at Project Parlour in January 2018, and he invited everyone to come and check it out. By unfortunate chance, it was snowing that day and few people made it out, but I was one of those few. Trudging through the snow and garbage filled sidewalks of Bed-Stuy, I made it a point to come as I knew the show meant a lot to him.

Due to the weather there wasn’t much of a crowd in the bar, and so we got a lot of time to talk one-on-one as he gave me a tour of his pieces while I sipped on a whiskey-ginger. Keith had a knack for intricacy, creating vibrant psychedelic collages of naturalistic and neon imagery. We bonded as he told me about his experiences with the god-drug ayahuasca, and its influence on his creative vision.

Born and raised in Brooklyn, he had left New York in 2006 after 20 years in television broadcasting to explore his purpose. He traveled the amazon and ended up living in South America for five years. Among the highlights of his pilgrimage, he spent time studying under local shamans whose spiritual guidance had a profound effect on his outlook on life. Seeking to fuse his cultural learnings with his passion for filmmaking, he filmed, directed, and produced a full-length documentary on ayahuasca. As he later explained to me, “The thing with ayahuasca… You don’t really do it for fun. You do it for physical, spiritual, and psychologically healing.”

“The thing with ayahuasca… You don’t really do it for fun. You do it for physical, spiritual, and psychologically healing.”

Eventually, we both left SOLD for our own reasons even as we both continued to dive deeper into the street art realm. In the interim between that magazine and this one, I ran a blog called ‘Well Pleased We Dream’ which served as the predecessor for the ideas that would evolve into UP Magazine. In October 2018, I linked up with Keith to write a story on a short documentary he created, ‘Fumero-ism: The Grafstract,’ centered on the titular artist. The film was a major accomplishment for Keith, as he had been working on it for over two-years. In the process, Keith and Fumero’s natural kinship developed into a strong brotherly bond. As I wrote in that article:

When the two artists, Fumero and Aronowitz, first met in a café in 2016 to talk about making a film, neither knew much about the other. However, one thing they recognized in each other was a seriousness for their respective crafts.

The artist responded, “I always bring my A-Game.”

The artist responded, “I always bring my A-Game.”

By April 2019, the first edition of UP was almost ready to be published. To represent the theme of ‘Money,’ I wanted the cover to be a contemporary artist’s interpretation of the Wall Street Bull, and Fumero was the perfect fit. Keith helped broker the conversation between Fumero and I for the cover design, and I remember the three of us sitting on the couches at Steve AmArtStop’s apartment chatting about my ideas for UP. Keith was one of the first who understood my vision and encouraged me to pursue it.

After the grueling labor of love it took to create UP, we had the launch party at The Storefront Project on June 20th 2019. It was beautiful madness as we packed the house with people coming from across the scene’s cliques to check out the little indie magazine we’d put together. I was run-ragged trying to keep up with the excitement, sitting behind the merch table moving magazines.

Mid-way through the night, a fight broke out and I scrambled through the crowd to the front to break it up, inadvertently pushing past Keith. Later when I went to apologize for shoving him, he laughed it off with understanding. “Hey, don’t worry about it. It was a crazy party, no one’s going to forget it!” The success of the launch jump-started my role as Editor-in-Chief, and led to the community taking me and my work more seriously. Keith’s role in helping to make it happen is something that I will never forget.

Mid-way through the night, a fight broke out and I scrambled through the crowd to the front to break it up, inadvertently pushing past Keith. Later when I went to apologize for shoving him, he laughed it off with understanding. “Hey, don’t worry about it. It was a crazy party, no one’s going to forget it!”

Through the rest of 2019, I was busy trying to continue pushing the growth of the magazine and Keith and I met up a few times for drinks. One night he invited me over to his apartment and showed me the clips of the new documentary he was working on, a profile on the eccentric artist David Henry Nobody Jr. As he had with me, Keith saw the potential and wanted to encourage it.

The last time I saw Keith in person was in December of that year. He was part of the line-up for ‘Beautiful Vandals,’ a group show at Van Der Plas Gallery in the Lower East Side. Among the artists was the legendary Al Diaz, and Keith was excited to be part of the curated roster. While Keith was already an accomplished filmmaker, this show was a major milestone for him as a visual artist. He felt like his work was starting to really get recognition.

In those early months of 2020, I was working on wrapping up Issue 3 – Community. Originally, Keith was slated to be in one of the articles for it. However when the pandemic hit and everything got fucked, that project got shifted to the backburner. One of the last conversations I had with Keith was a phone call, talking about doing another project together. He was a bit disappointed the Community issue article fell through – he understood the significance of what I’ve been trying to achieve with UP and wanted to be in a print issue. I promised him I would make sure one day he was.

With the release of Icons this past September, I finally got the opportunity to make good on my promise. Keith, Baston 714, was one of the featured artist’s in Lonnie’s article ‘Faceless: Showcasing Iconic Artists Who Don’t Show Their Faces.’ For Keith, the distinction between Baston 717 and Baston 714 was critical, with one being a public display and the other an anonymous mask he could wear to freely express his creativity. It is among my deepest regrets as Editor-in-Chief that Keith wasn’t able to see himself in our print before he passed away. Perhaps this sense of guilt is partially why I’ve struggled to write this story.

When curating the release part for Icons, one of my top priority’s was ensuring that Baston 714 was in the line-up. Thanks to the help of Lonnie & Fumero, we were able to feature his piece titled ‘Soy Loco’. At the end of the 4-day show, the canvas was bought by Queen of Hearts Global, who had known Keith through her program ‘Artsy Sunday.’ With the blessing of all involved, we made sure 100% of the proceeds went to Keith’s family. Afterwards, Pilar informed me the money went to paying for their son Sean’s passport. I like to think this would’ve made Keith happy, knowing his art went to funding his family’s travel, given how much travel inspired his own life.

If someone were to ask me to describe Keith, my first response would be ‘he was a good guy.’ As he was. Humble, caring, creative, down-to-Earth, open-minded, and understanding – Keith was the kind of person who took his work seriously, whether that was a documentary or a canvas, he always brought his A-Game. While he may not had a million Instagram followers, or become famous with his art, those who are in the know recognize how instrumental he was in helping to grow the street art community.

Other artists have also paid tribute to Keith in their own ways – Fumero dedicated a blog post to him, as well as painting a memorial mural in his likeness alongside Outersource at the Am Art Stop wall. Additionally, CityKitty hosted Fumero and Dirk on his Scratching the Surface podcast to talk about their relationships with Keith.

So here’s to you Baston – May You Rest In Paint for Eternity. 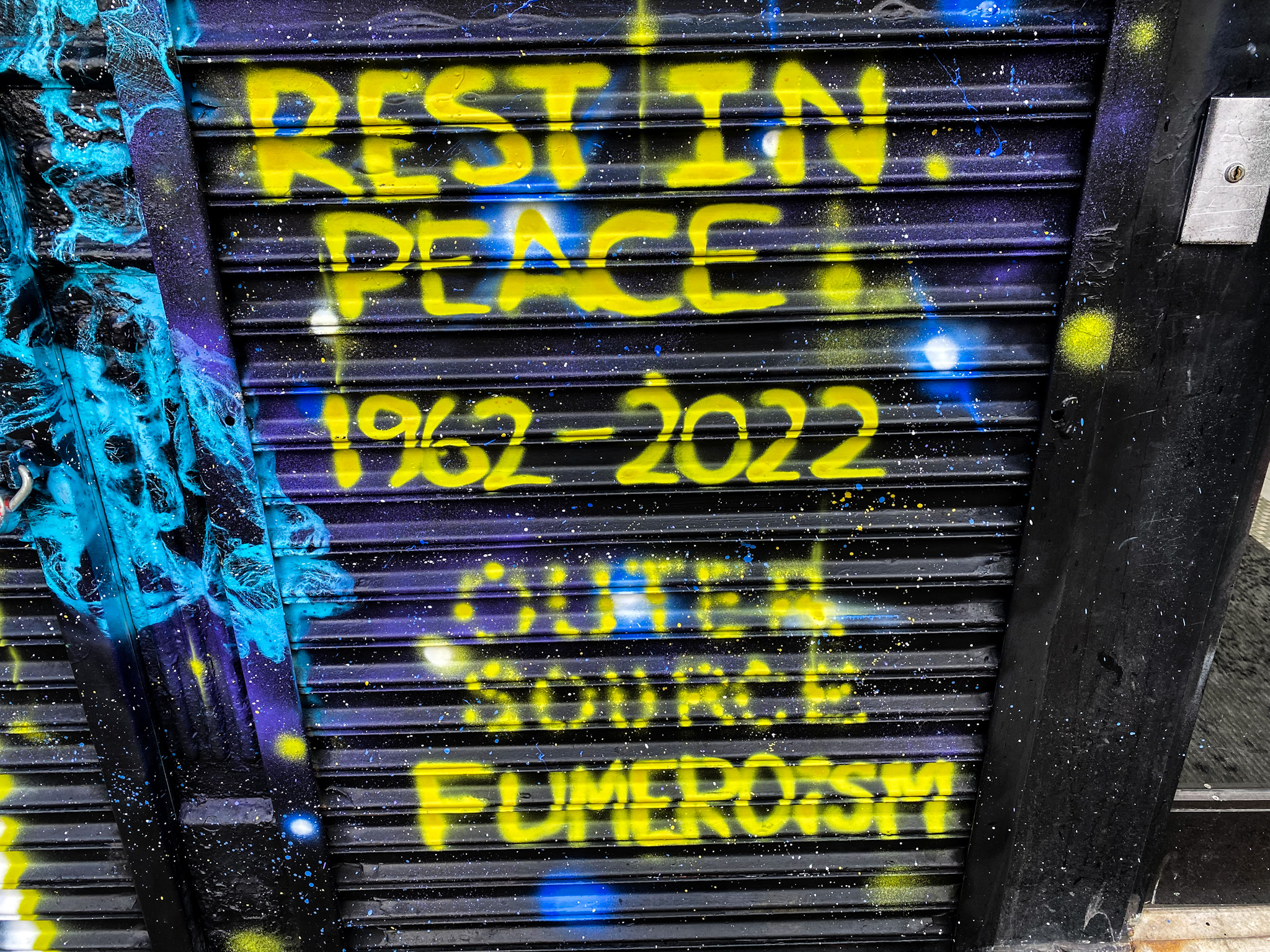