When drinking a local craft beer from a micro-brewery, it’s important to sip out of just the right glass. For such an interesting, exclusive craft drink, Mike—a Brooklyn entrepreneur and street art and craft beer enthusiast, felt the beer glass needed to rise to the occasion.

Mike, who prefers to go only by his first name, created Beer Canvas: a small operation that uses beer glasses as a medium to collaborate with New York-area street artists to create limited-edition pieces of functional art.

The company releases one new artwork weekly on glass cups ranging from goblets to can glasses and pilsner glasses. Sometimes, the artworks will be in collaboration with local craft breweries and accompanied by a specific beer that pairs with the tone of the artwork.

Over the past four years, Beer Canvas has included work from ubiquitous New York artists like City Kitty, Zero Productivity, Belowkey, Dirt Cobain, AJ Lavilla, Reggie Warlock and others, [not to mention a collab between Vanessa Kreytak and UP Mag as well] in an effort to celebrate local talent while also highlighting local craft breweries. “The whole idea of melding art and beer together was always kind of the plan and then once I figured out a way to do it with the glass, I just ran with it,” Mike said. 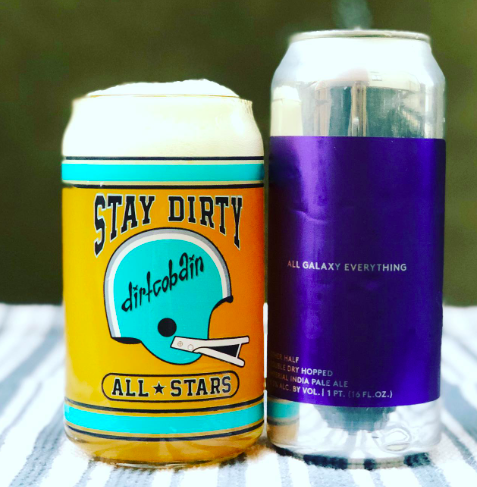 “The whole idea of melding art and beer together was always kind of the plan and then once I figured out a way to do it with the glass, I just ran with it.”

So far, it’s working—since it’s inception, every weekly collaboration has sold out, Mike said. The art glass turned out to be the perfect bridge between the craft beer world and the street art world in New York City; two markets that could benefit from sharing their audiences with one another. The breweries he’s collaborated with have included local operations like Other Half NYC, Inu Island Ales, RAR Brewing, Greenpoint Beer and Sandbox Brewery.

In addition to craft brew releases, Mike has also coordinated beer events and art shows, drawing large crowds of beer and art lovers looking for something more experiential. Mike said that at many BeerCanvas art shows, each purchase of a street artist’s gallery work came with a beer and a unique BeerCanvas cup. The brand even hosted a tent at this year’s Bushwick Collective Block Party. 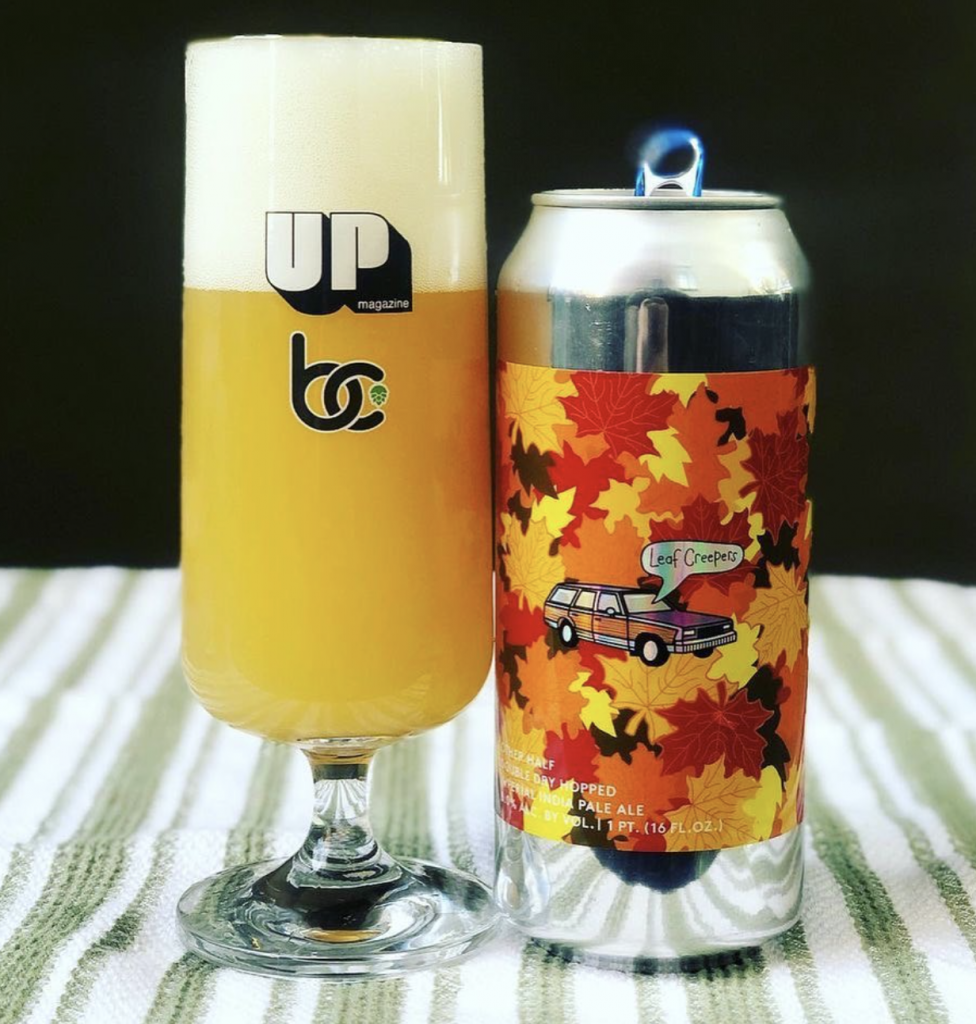 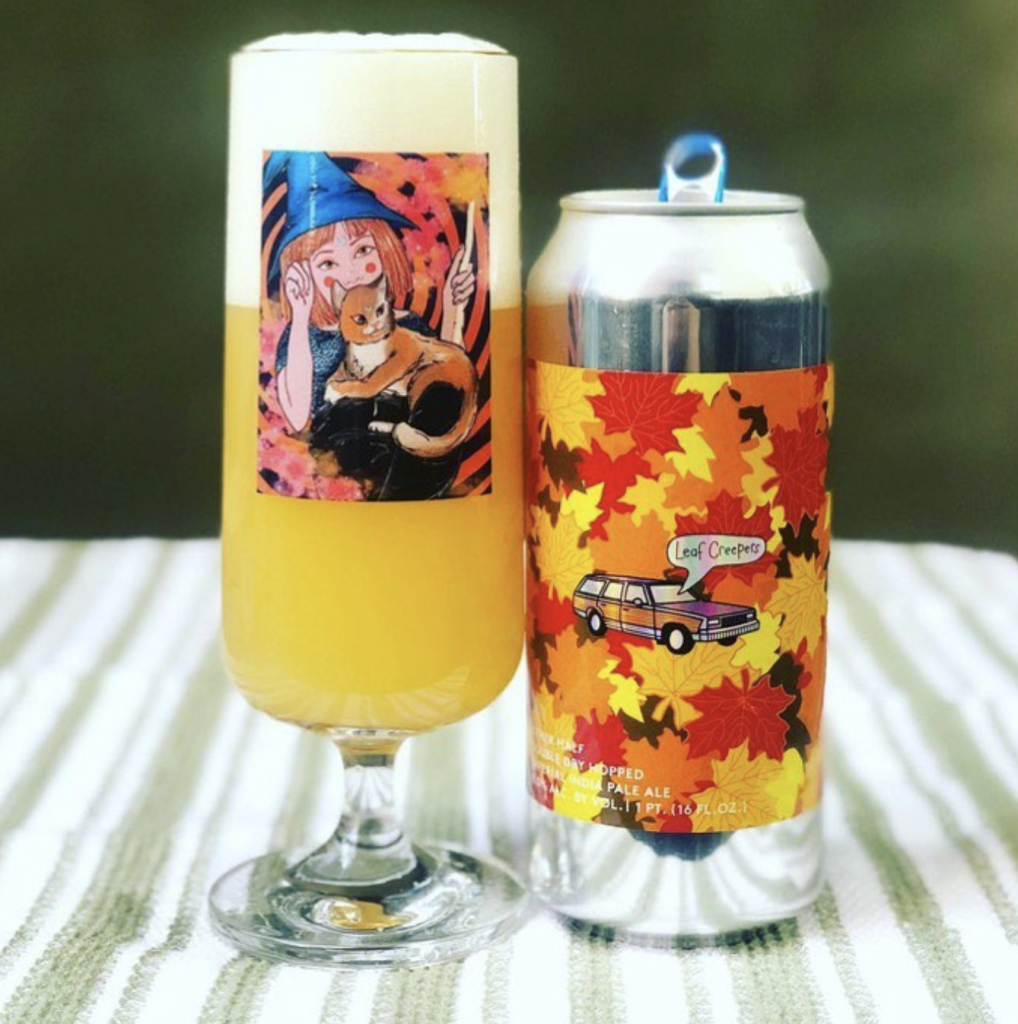 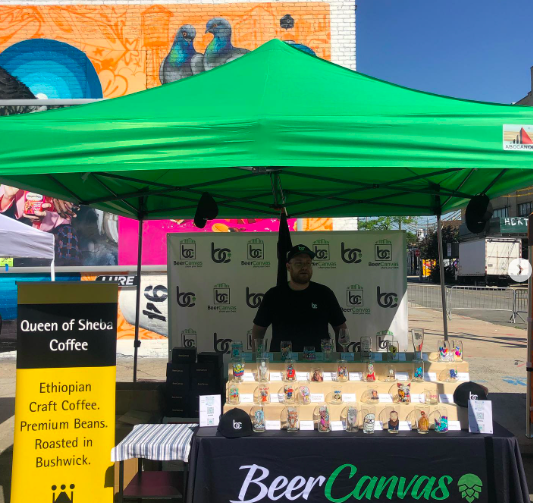 In order to keep the glasses special editions, he tries not to issue more than 100 in a run, much like a fine art print. Sometimes the cups even come with their own art prints or original works, depending on the collaboration.

Some of the vessels are works of art themselves, like an edition of ceramic tumblers that, at first glance, look like they’re made of cardboard that Mike just released in collaboration with Tim Kowalczyk, who makes ceramic vessels that imitate corrugated cardboard, tin spray cans and more.

Lately, Mike has begun expanding his start-up products to include a windowed box that would both show off his unique glassware while also protecting the cups from the jostling that can go on in cupboards. BeerCanvas’s strong presentation is one of the factors that draw many artists to take these collaborations seriously. 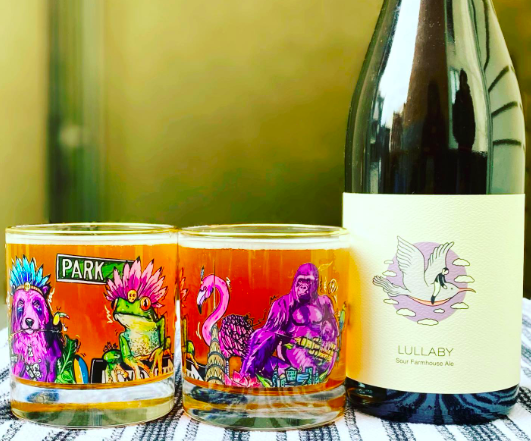 “I love glass, I love drinking beer out of a cool glass, I love talking to artists, I love collecting art, I love being a part of these communities, connecting people to each other, the list just goes on.”

Recently, Mike was featured on City Kitty’s podcast, Scratching the Surface and right now, he’s facilitating an upcoming art show and craft beer release party collaboration between Sandbox Brewery and artist Subway Doodle, who will also do the label on the beer can in addition to a limited-edition glass. “It’s a labor of love,” Mike said. “I love glass, I love drinking beer out of a cool glass, I love talking to artists, I love collecting art, I love being a part of these communities, connecting people to each other, the list just goes on.”