Belfast, A Mural Lover's Paradise with a Dark Edge

It’s close to one in the morning in Belfast, Northern Ireland, and as the singer-songwriter at The Points strums a few opening chords, all the pubgoers cheer. This isn’t in response to “Wonderwall,” “Tubthumping,” or “Mr. Brightside.” No, what gets people going in Belfast is The Cranberries’ “Zombie”—you know, nothing makes you want to spend a night out drinking beer and socializing like a protest song about the Irish Republican Army’s accidental murder of two children. The singer wails the dirge-like chorus and I drink a whiskey, my calves sore from dancing with strangers for half of the night. The ghosts of the Troubles, Northern Ireland’s bloody conflict between Unionist and Republican forces, wander Belfast, but the locals have befriended them. 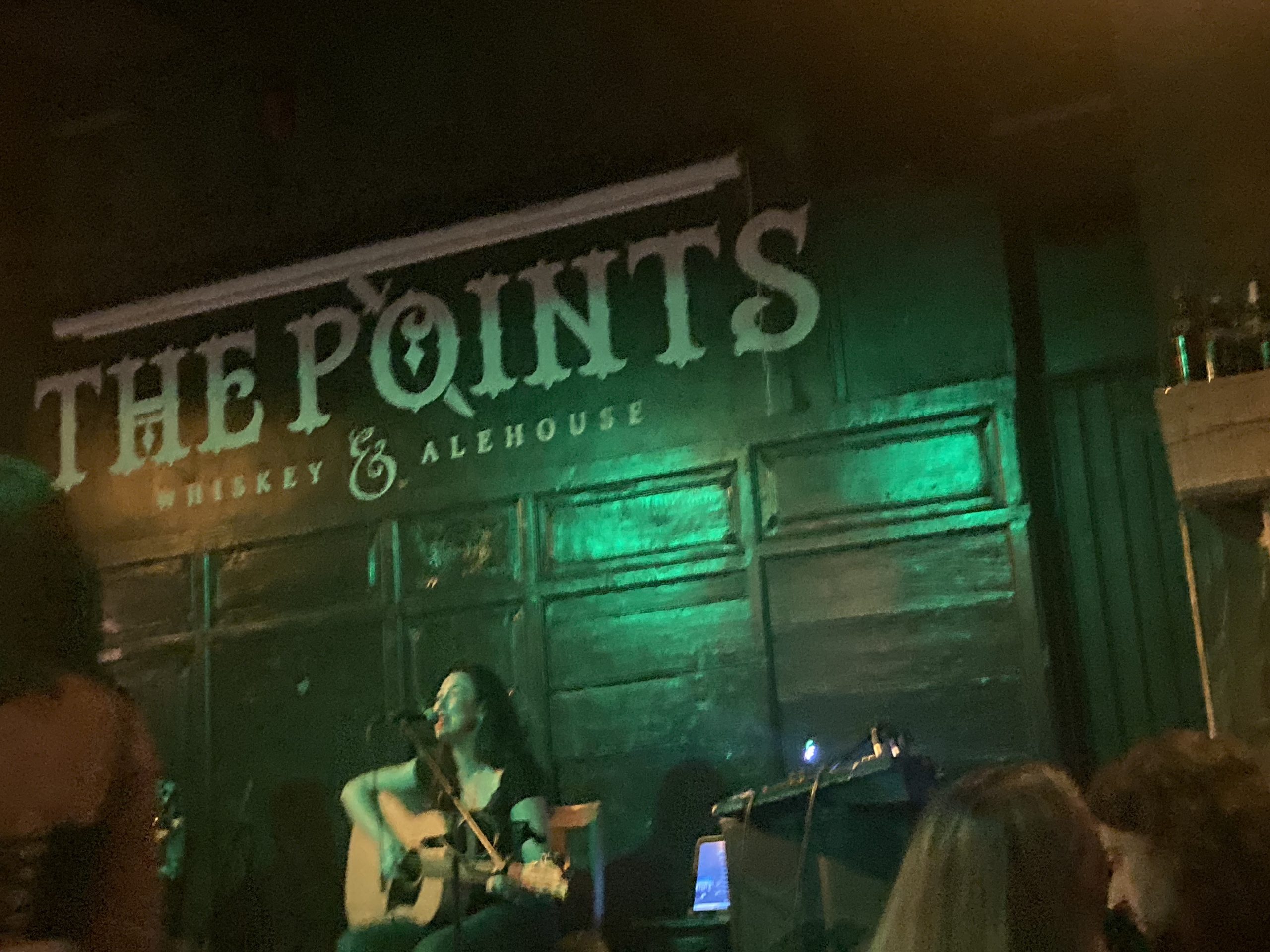 The ghosts of the Troubles, Northern Ireland’s bloody conflict between Unionist and Republican forces, wander Belfast, but the locals have befriended them.

After spending nearly a month in Glasgow, I’d gotten used to the drab, quiet nature of the city. People in Glasgow are subdued, and the city’s identity is murky. I met some interesting and vibrant artists like Chris McCrory, Hannah Kate Absalom, and Nkem Okwechime, but the city’s character didn’t seem to lend itself to street art. Belfast was the opposite. In the streets of Belfast, murals and graffiti blossom out of the brick walls. Sunlight makes the river sparkle in a way Glasgow’s River Clyde doesn’t. I had to admit, I would have thought it would be other way around given Belfast’s history.

Maybe part of why it’s such an exciting city to visit as an art reporter is that it has a rich, fascinating visual culture even beyond works of art. In Belfast, symbols hold immense weight. While walking through the Unionist neighborhood of Sandy Row, I was greeted by a forest of Union Jacks and portraits of the queen. A mural which once said You Are Now Entering Loyalist Sandy Row, Heart of South Belfast, Home of the Ulster Freedom Fighters was repainted in 2012 to be a portrait of William of Orange. The repainting project even made sure to only depict William of Orange by himself, not on a white horse as he’s often shown in Unionist propaganda. “We were led to believe that this particular mural was detrimental to regeneration,” community representative Garnett Busby said to the BBC. 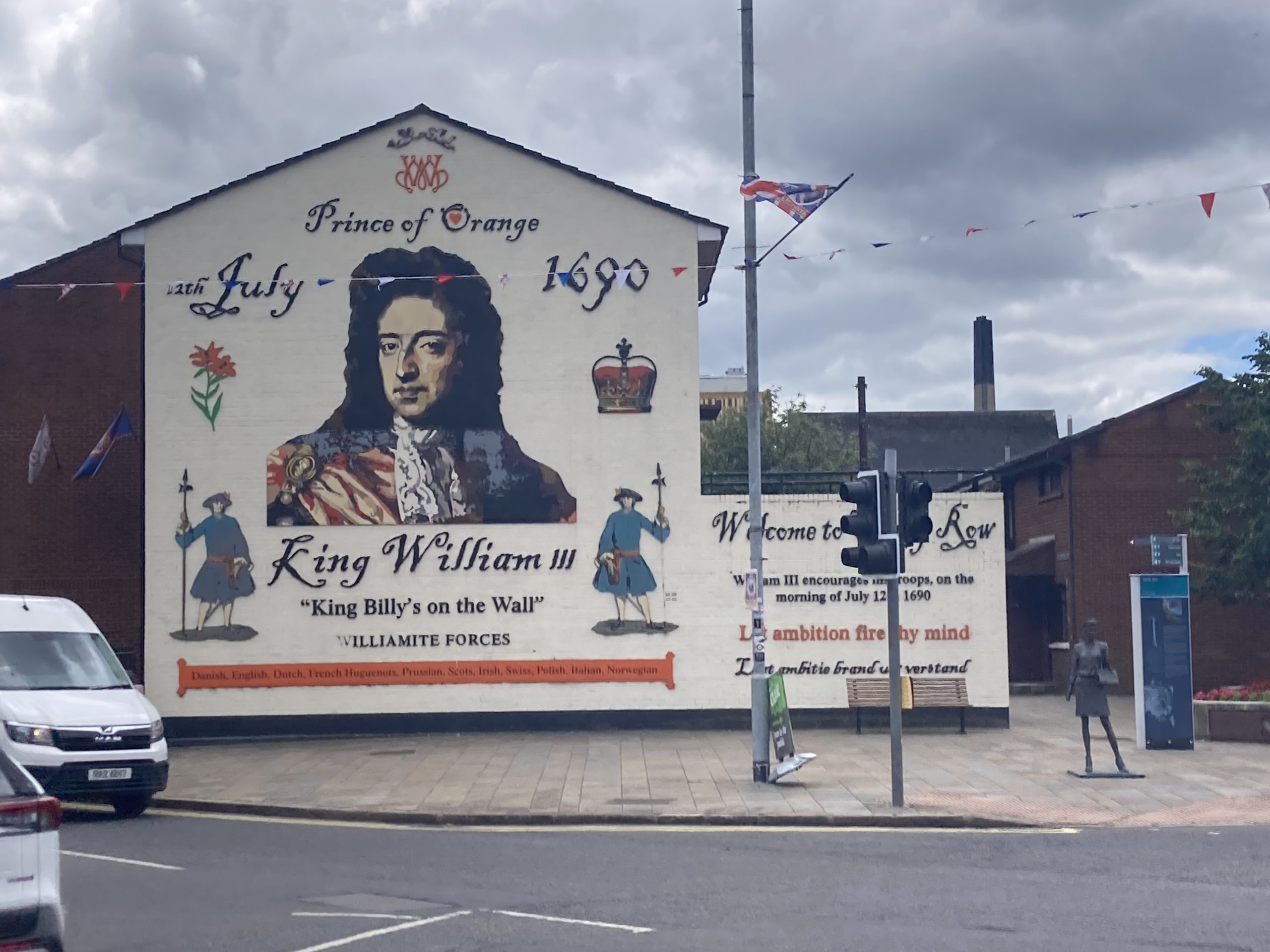 “We were led to believe that this particular mural was detrimental to regeneration.”

My friend and I wandered down Shankill Road towards the Peace Walls that divide a Unionist neighborhood and a Republican neighborhood. The writer in me made a pit stop at Shanway Press, a Belfast-based small publishing house whose director asked “What are you doing in West Belfast?” when we explained that we were out of towners. We chatted for a long time about the memoirs of the Troubles that have begun to surface now that the tension has eased in the country a bit. When we did eventually make it to the Peace Walls and into the Republican street of Falls Road, we were greeted by a mural of Bobby Sands, an activist who died during a hunger strike in prison.

Bobby Sands and William of Orange are not neutral figures – William of Orange represents anti-Catholic sentiment, whereas Bobby Sands was a member of the IRA, known for guerrilla violence. But modern Belfast has gotten to a point where people can look at their images as historical figures and not necessarily as points of division. Even the yoga instructor at the studio I went to shrugged and said “People our age just don’t give a damn anymore” in reference to the stark sectarian differences. 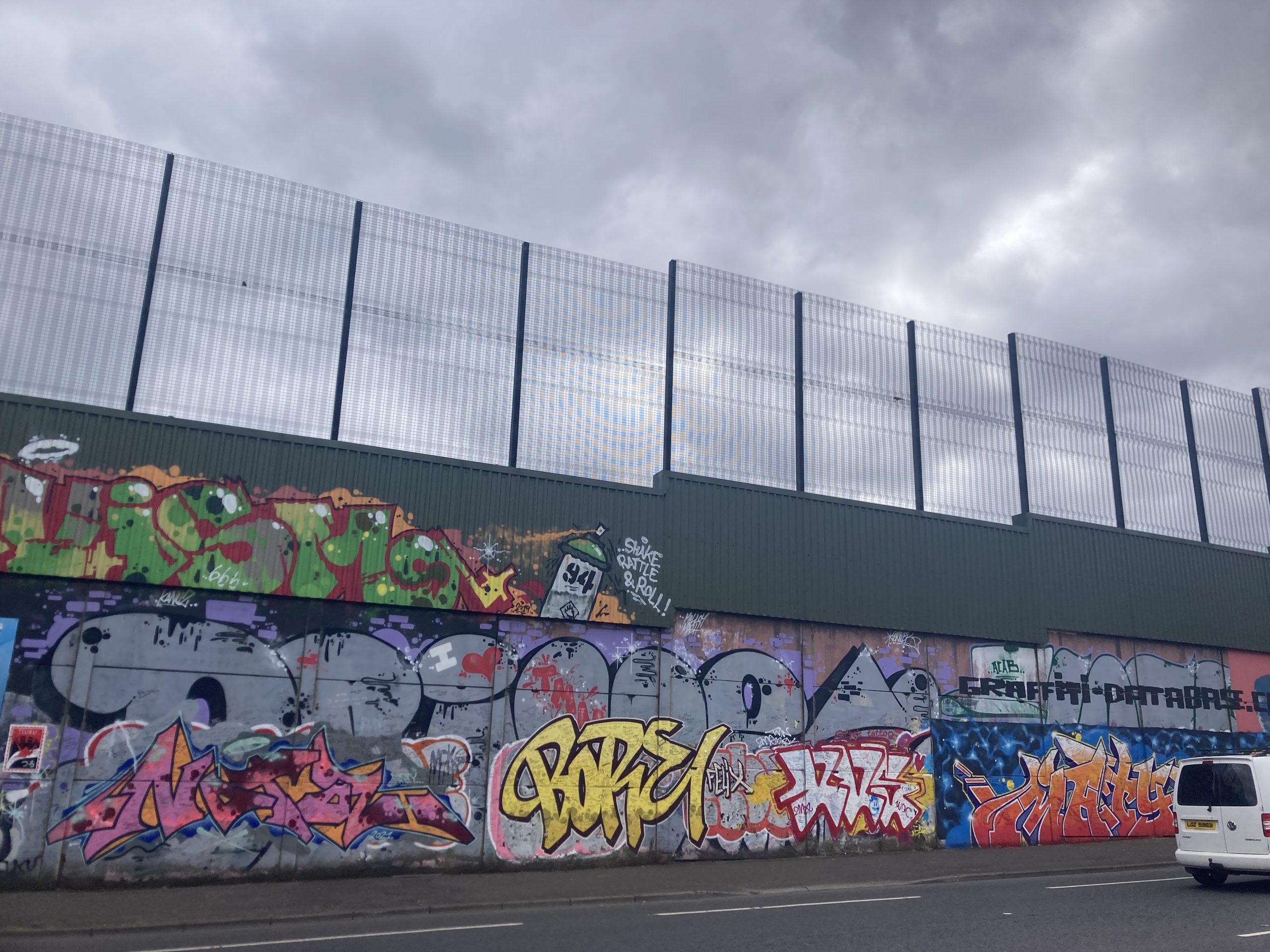 Shanway Press director John Monaghan explained that many outsiders misunderstand the historical context of the murals and instead only see their tourist value.

There’s been much written about the Peace Walls, and though walking by them was a powerful experience, I’m not interested in writing about Belfast as a sad story from history or a site of “dark tourism.” Shanway Press director John Monaghan explained that many outsiders misunderstand the historical context of the murals and instead only see their tourist value. I wanted to get a perspective on Belfast from someone who could humanize it in a modern context—so I mined an unusual part of my personal history, my internet friendships from my days as a prolific Stephen King fanfiction writer. Multimedia artist Judith Guiney and I used to exchange fanart of characters from our mutual favorite book The Long Walk, but she now studies fine art in Belfast and runs her own illustration company. 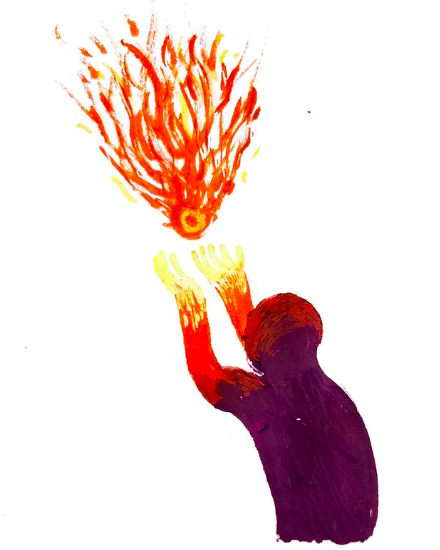 “There’s something about living in Belfast that has produced such a beautiful art scene – mostly from people my age, in my generation at least. I’ve always felt a 50/50 split of pride and shame about where I’m from, and the want to prove myself.”

“There’s something about living in Belfast that has produced such a beautiful art scene – mostly from people my age, in my generation at least,” Guiney said. “I’ve always felt a 50/50 split of pride and shame about where I’m from, and then want to prove myself.” Though her art is mostly pastel work, Guiney. “I think that environment of constantly simmering unrest, before from sectarian violence, and now from our government and its failures, inspires a lot of despair and anger. Art is an incredibly effective way to express those feelings.” Expressive is certainly an apt term to describe the environment in Belfast. That’s what I was picking up on that was missing in Glasgow—a culture of expression that allows its people to explore darker feelings. “I’ve always had a desire to delve into darker content in my practice,” Guiney said. 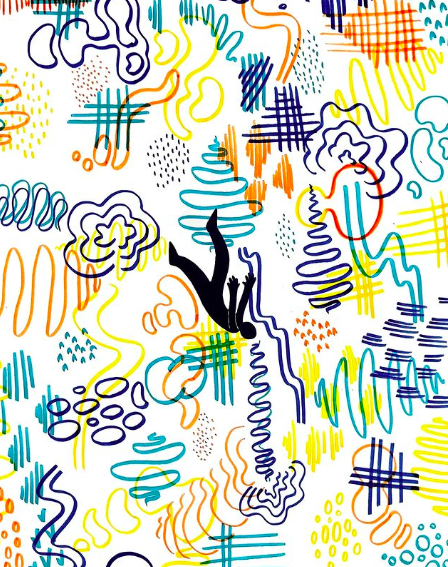 “I think that environment of constantly simmering unrest, before from sectarian violence, and now from our government and its failures, inspires a lot of despair and anger. Art is an incredibly effective way to express those feelings.”

My traveling companion commented, too, on the fact that in Glasgow, people drink away their feelings, whereas in Belfast, people drink to celebrate because there’s an awareness of the futility of life. Belfast is simultaneously like nowhere else in the world and like everywhere. Guiney, who studied art in Weimar, Germany, reflected that “living in Weimar has taught me that Belfast isn’t so different, actually. It was a comfort to meet other people and realise that my experience of growing up with conflict and modern history of violence wasn’t just restricted to my home country.” It’s ironic that in a contemporary world where we’re often bombarded with overwhelming images of violence and desensitized to it, simultaneously many of us have never personally experienced it. Most of us don’t think about how valuable the present moment is and how quickly it can be taken away, given the sheltered comfort of modern life.

But the murals of Belfast and its plethora of Union Jack and Irish flags remind you that it’s not long ago or far away, and that life goes on. In the Republican Falls Road, the murals go a step further in recognizing the interconnectedness of global struggles. “The Nationalist murals often cover areas and cases of repression and injustice, alongside the expansive history of Ireland and its separation. Unionist murals, at least the ones I’ve seen, are far more territorial,” Guiney said. Walking around Northern Ireland made me think about how much of what you believe is what you are, and where the line is in the contemporary political landscape. What you think is so deeply tied to your identity, to the point where there’s an assumption that if you are a certain group, you think a certain way. Belfast leans into that complexity and forces you to look right at it. 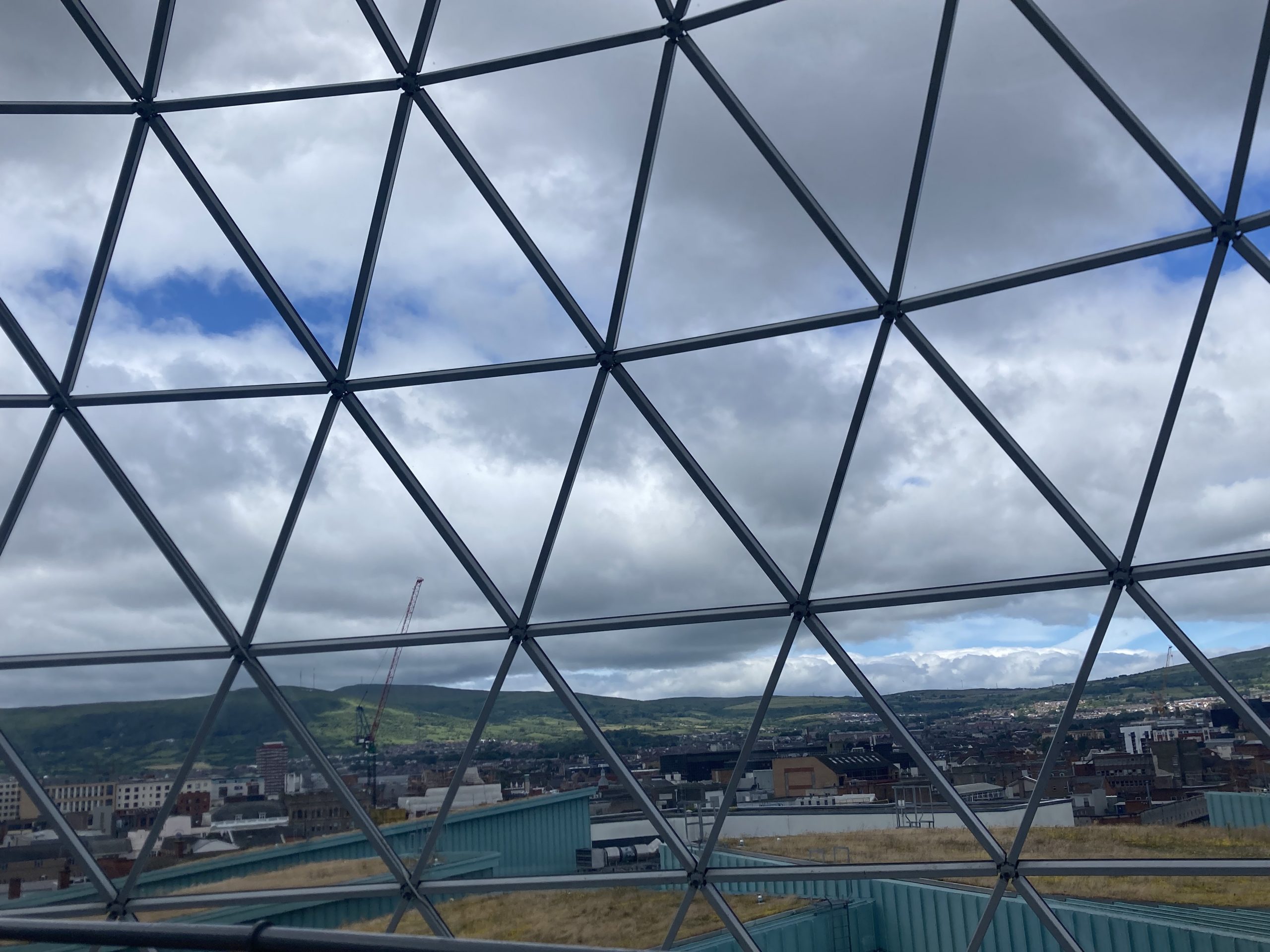 Belfast’s art scene doesn’t have the “cool” factor of London or Berlin. It’s gritty and at times uncomfortable. You look at the murals and see the ugliness of history transformed not into something beautiful per se but into something real. It’s a city that practically vibrates with art, to the point where the art has a tangible effect on people. “I think there was always a wariness of going into an area that had lots of murals and colours, since I believed people who were more open about expressing what ‘side’they were on seemed more dangerous or incitive – I know now that’s not necessarily the truth, but sometimes that tribalism is so bombastic that you start to become defensive,” Guiney described of her own upbringing in East Belfast.

The murals of Belfast remind you that art isn’t just there for Instagram, but that art has real power, whether political or spiritual. Art, this nebulous way we express ourselves, is power and Belfast is a shining example of the messy journey of learning how to harness that power. A wall near our hostel was anonymously tagged with the quotes: If I can’t dance, it’s not my revolution and It’s always too soon to go home. I can think of no two better quotes to exemplify Belfast. 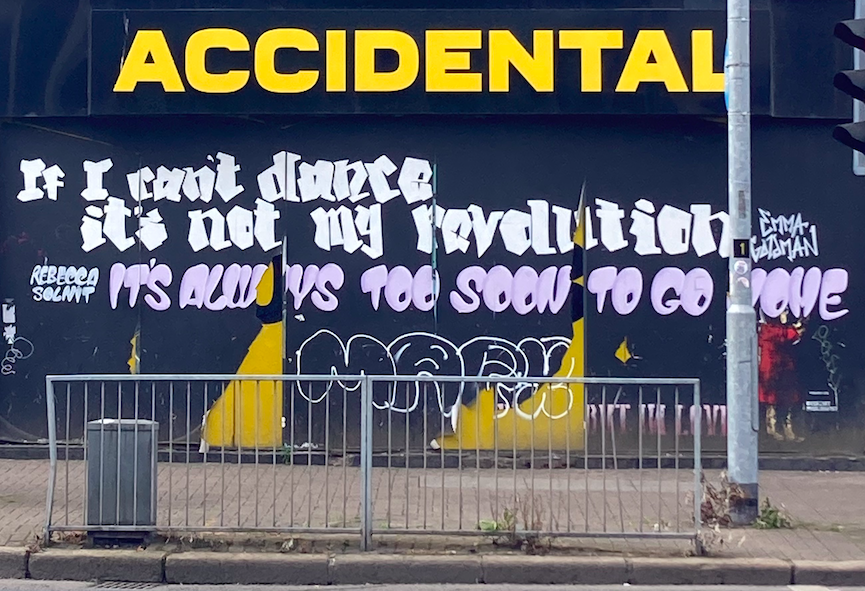