On a map, the Piedmont plateau of the Appalachian Mountains swallows western Pennsylvania. There’s a long-standing debate about what exact region of the country my new home, Pittsburgh, falls into, but the friendly bark of a Pittsburgh accent and the deluge of hills that make up the city make the case for Appalachia. As a Swiss-American, I’ve always been drawn to mountains, and since becoming a resident, I’ve wanted to explore the unique place Appalachia occupies in American culture. It’s the frequent scapegoat of Mid-Atlantic college students and activists, but it’s been my belief that not just understanding Appalachia but living its landscape and history is a key to understanding American identity as a whole.

Chattanooga, Tennessee-based painter Jules Jackson is similarly interested in Appalachian identity. His mural Birth, Life & Death in Appalachia is a large-scale triptych piece on a courtyard wall in Stove Works, a former stove manufacturer turned at gallery in Chattanooga’s Highland Park neighborhood.  “Chattanooga used to be a notoriously industrialized town, so viewing the building is like taking a trip backwards in time,” Jackson said. “I felt that the mural connected to the space because a lot of rural Appalachian communities end up reliant on industrial jobs.”

Fittingly to Jackson’s mural’s theme, Stove Works is situated right near a sprawling military cemetery. “I wanted to bring a very universal narrative to a specific community that I feel is often overlooked, and what could be more universal than birth, life, and death? Today, Chattanooga is a very slick, cosmopolitan place, but a lot of people living here have roots in Appalachia that we almost never think about,” he said.

Jackson, a fine artist whose lifelong fascination with telling a story through images has led him to animation and narrative painting, drew on his own family history for the mural. “Lately, I have been exploring my own family roots in Appalachian culture, and sorting through the ambivalent feelings that I have about my heritage,” he said. “There are a lot of things about my life that don’t mesh at all with traditional Appalachian culture, but that’s where I come from, historically.” 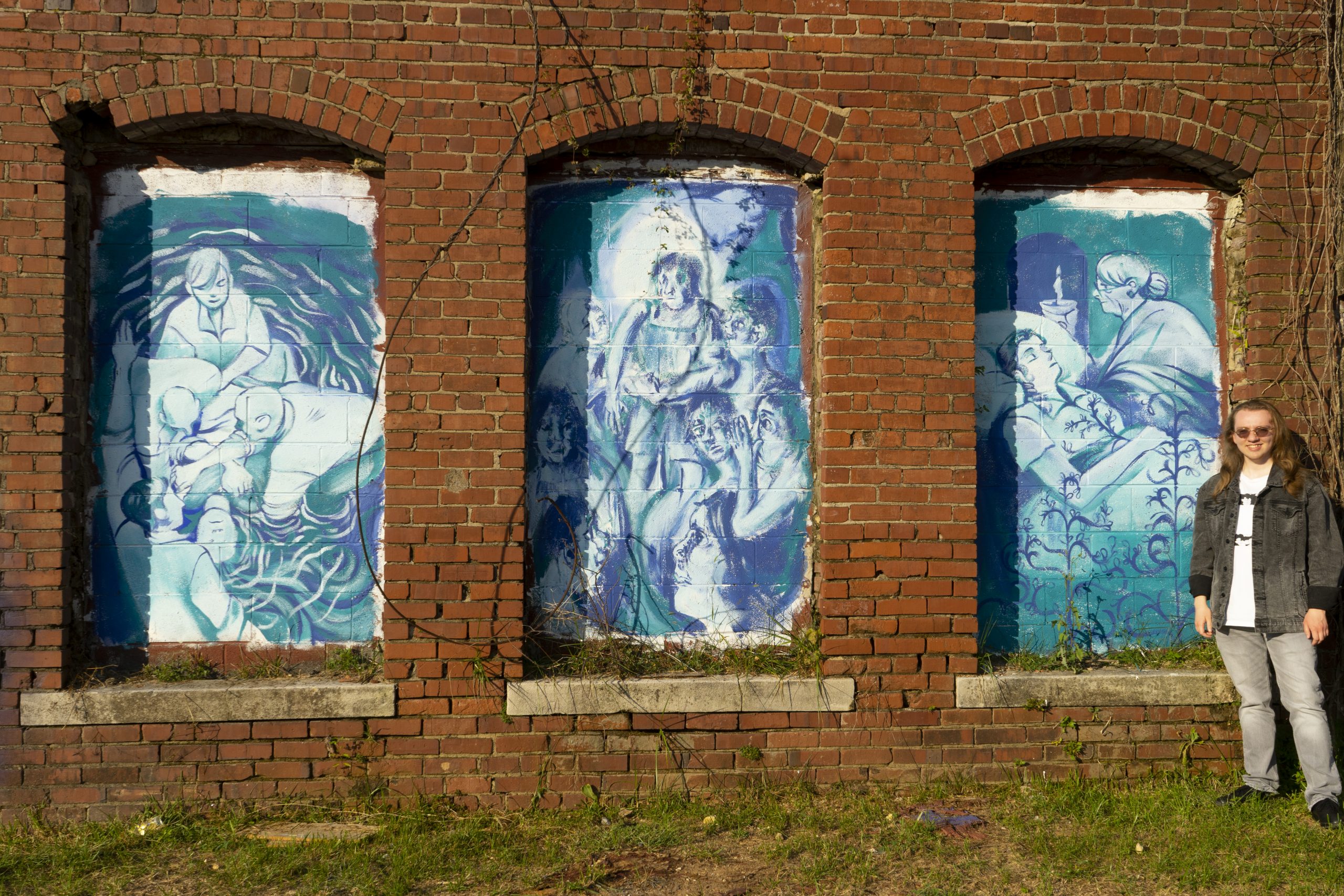 “Lately, I have been exploring my own family roots in Appalachian culture, and sorting through the ambivalent feelings that I have about my heritage,” he said. “There are a lot of things about my life that don’t mesh at all with traditional Appalachian culture, but that’s where I come from, historically.”

Though this was Jackson’s first time painting a mural, he had done pieces of a similar scale in the studio before. Old New, the exhibition it was painted for, combines work from street artists and studio artists. “I didn’t have a lot of experience with street art. However, because of the way the exhibition was designed, my work was displayed right beside a piece by graffiti artist JACK. We ended up with this dialogue between two practices with different roots. It was a really harmonious balance,” Jackson said.

The triptych mural itself is a swirling, evocative mixture of different tones of blues, with ripples and shadows of white creating dimension and movement in each panel. Looking at it brought to mind the staple of many of my own art school classes, Maggie Nelson’s experimental novel which begins with the line: Suppose I were to begin by saying that I had fallen in love with a color… A lyrical, philosophical, and often explicit exploration of personal suffering and the limitations of vision and love, as refracted through the color blue. Will Sutton, an artist at Stove Works who collaborated with Jackson on the second panel, originally suggested the blue-and-white color scheme. “Plus, blue and white are my grandmother’s favorite colors, and since this series was really about family, I wanted to give a nod to that,” Jackson said. 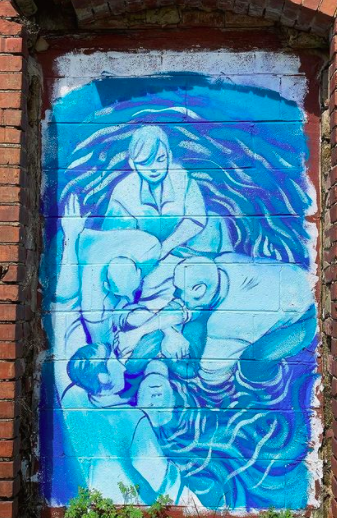 The first panel, “Birth,” shows what Jackson describes as a baptism. “It’s chaotic, potentially traumatic, a struggle – I feel that it mirrors the physical act of birth, in addition to the spiritual significance of rebirth,” he said. The cerulean water surrounds all four figures in the painting, and the faceless figure, an adult rather than an infant, is submerged in the waves in a way where the water around them looks like flowing hair. The delineation of waves using white paints is mesmerizing. They have their arms crossed over their chest in a way more associated with funeral viewings than birth.

“It’s chaotic, potentially traumatic, a struggle – I feel that it mirrors the physical act of birth, in addition to the spiritual significance of rebirth,” he said.

In “Death,” however, Jackson chose to portray not a funeral but a home wake. “There are many specific preparations that have to be made for a home wake,” he told me. “In this mural, I chose to depict one practice where the eldest woman in the family waves a candle over the deceased person three times.” The elderly woman Jackson portrays is wrapped in a shawl, and the candle she holds looks both somber and loving. “In the background is the ‘door of death’ – a specific, dedicated door in the home that the deceased person is led out through after the funeral,” Jackson described. In the panel, the door is a small, dark corner behind the deceased’s head. Several leafy plants weave their stalks up from the bottom of the mural into the deceased’s bed, their leaves curling onto the body. Though the panel represents death, the plants bring a sense of life and growth into the scene—a choice which resonates with the presence of both natural beauty and economic decay of the Appalachian region. 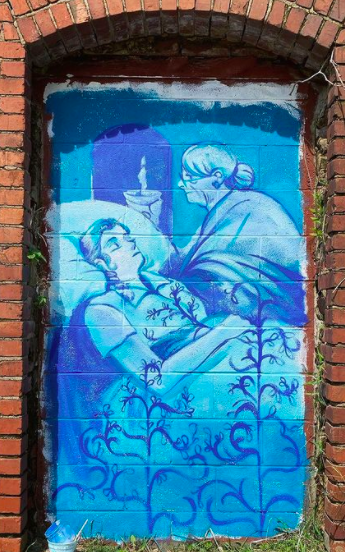 What I thought was one of the most interesting choice Jackson made was to portray birth, life, and death as a triptych rather than a duality. He painted the series in three because “the idea of a trinity is significant in Christianity, and although I personally am not Christian, the faith is a very significant part of my Appalachian family.” But beyond that, instead of simply jumping from birth to death, Jackson took on the ambitious task of portraying all of human life in a single panel between them. Originally, “Life” was going to be a quilting circle of all the women in Jackson’s family, but as he and Sutton painted, it became more abstract. “We didn’t plan this at the outset,” Jackson said. “But I think it made sense because life is much more complicated and chaotic than one still image can describe.”

“We didn’t plan this at the outset,” Jackson said. “But I think it made sense because life is much more complicated and chaotic than one still image can describe.” 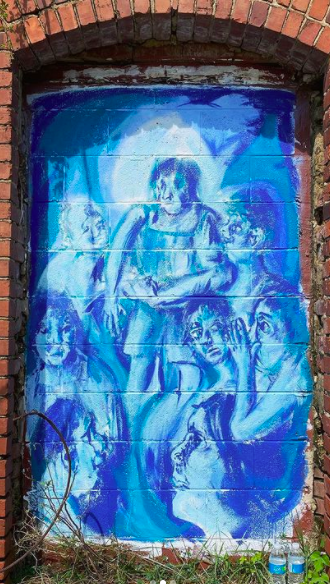 “Life” shows a series of chattering figures blurring in and out of one another. Some are full-bodied, but others are simply faces gazing at each other or off into the distance. The paint smudges at the edges of each figure, in sharp contrast to the smooth lines of “Birth” and “Death.” During the process of painting the triptych, Jackson himself experienced one of the complexities that make life so difficult. “I finished planning the composition for this series the weekend before I lost someone who was extremely important to me,” he said. “The loss completely upturned my world, so it was almost like I had to re-learn everything, including how to make art. At first, I doubted whether I could ever be creative again.”

But the artistic process proved to be a force of good in Jackson’s life. “This mural really rescued me,” he stated. “Painting at this scale, in the August sun, was very physically taxing – the physical work blocked out my mental chaos. The process of painting this mural was my way of proving to myself that I could still make art.” The loss that uprooted his creative practice could be a death, a rebirth, or simply a part of life. One of the sticking points of Jackson’s mural is that these three concepts are the only thing which happens to us all, whether Appalachian or urban, young or old, religious or nonreligious. Everyone who hurts us, everyone who loves us, everyone we love, and everyone we hate experiences birth, life, and death.

“This mural really rescued me,” he stated. “Painting at this scale, in the August sun, was very physically taxing – the physical work blocked out my mental chaos. The process of painting this mural was my way of proving to myself that I could still make art.” 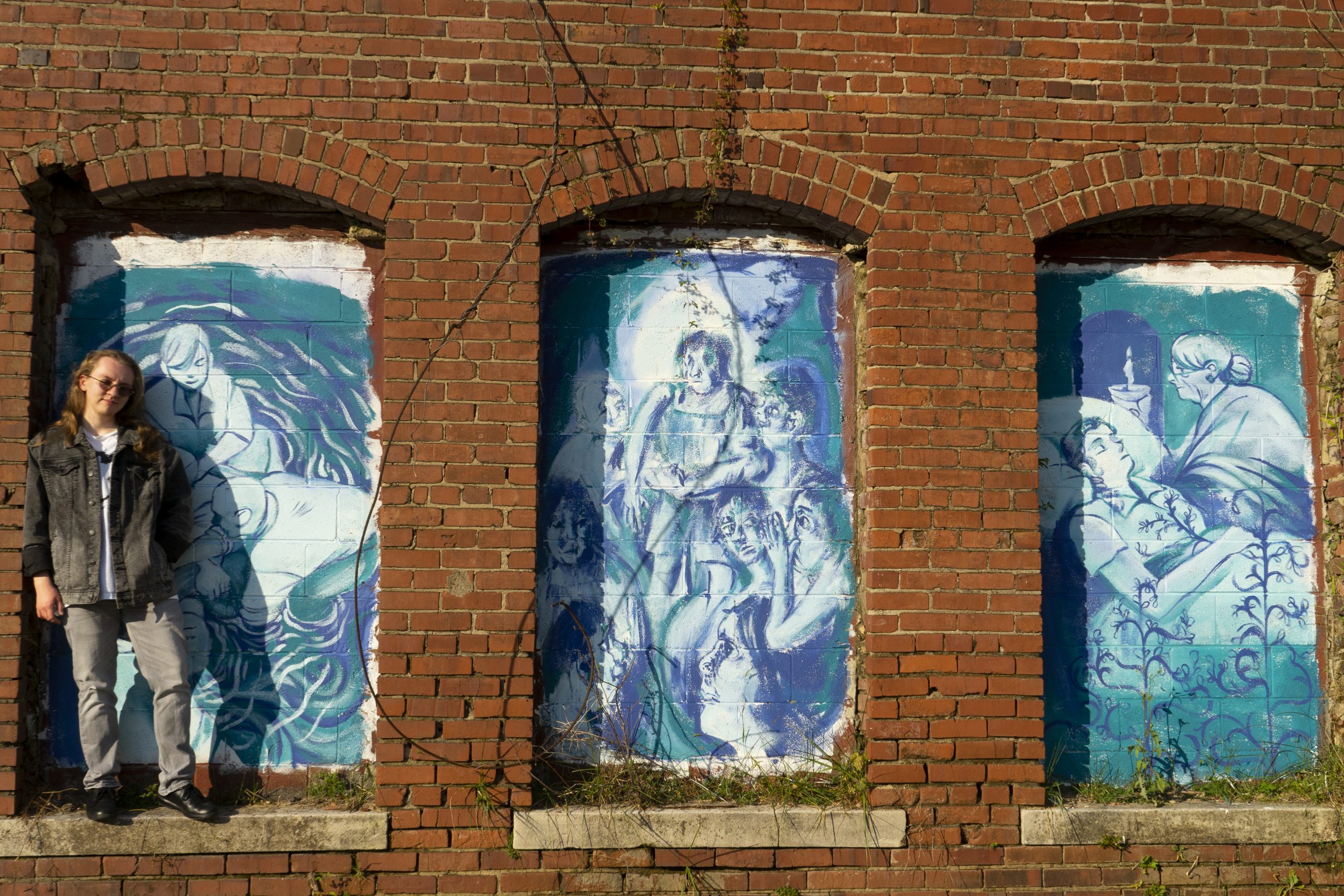 In the mountains, perhaps it’s easier to access this truth. The captivating blues of the mural are a call to look away from the technology and popular culture that distract us from how truly futile and fragile our lives are. Maybe that’s part of what a life in the Appalachian Mountains teaches. Since moving out of New York, I am acutely more aware of the passing of time and the enormity of the natural world around me. “I’m trying to let my art practice become a healing refuge,” Jackson said to conclude our interview. Birth, Life, & Death in Appalachia is on view as part of the Old New series at Stove Works, 1250 E 13th St in Chattanooga, Tennessee. Jules Jackson’s mythology-inspired animated filmography, zines, and storyboards can be found at his website.