It Felt like Awe: The Bob Gasoi Memorial Art Alleyway

It was like a punch to the gut or a right hook to the jaw, in the best possible way. The outside of the store Shop Therapy was adorned with a giant mural, or at least I thought it was a mural. I was later corrected by Joey Mars, the artist. It was a wraparound; like something you would put on a bus, except it wrapped it around the front of the store. Its yellows stood out the most to me. The beams an off-tint neon. The top a buttercup yellow. The mural covered in faces pieced together by bits of collage. A collage of surrealism, and definitely, a punch to the gut. Especially considering the two buildings next to it were the classic pale look of Cape Cod.

Cape Cod is a homogenized zone. Most towns look alike in aesthetic and population. The vast majority of art I have seen in my 20 years here consisted of watercolors of the beach. Perfect to hang up in your beach house, but ultimately unremarkable.

I didn’t discover Provincetown, known as Ptown, until last summer. One of the gay capitals of the US, famously known for being where members of the LGBTQ+ community retire complete with nightly drag shows and pride parades, I remembered Ptown in bright colors and provocative stickers on mailboxes. There was a gallery that had a piece in the window that said Sugar Daddy and depicted a bear. If I were to point to something as quintessential Ptown art, it would be that.

Yet, it’s not a gallery that holds the gem of Ptown but a crowded alleyway. Not crowded with people, as it’s not tourist season yet, but crowded with images. The alley, built on the exterior wall of Shop Therapy, stretches down almost three store lengths and is wide enough to have people walk side by side. On the right side are wooden books opened to illustrated depictions of Alice in Wonderland. Metal flowers branch out from the ground with wire bugs crawling around. The focal piece is a sign that says “Spank the Monkey” along with a tattoo-esque drawing of a woman spanking a monkey-human hybrid. The piece made me uncomfortable. For one, I hate monkeys. But deep down, the disturbance came from a raw confusion. Is this sexual? Is this a reference to something? I couldn’t stop staring at it. The colors were anything but muted. I felt sucked in by it. Ten minutes had gone by and I realized I had been staring blankly at a woman spanking a monkey. The sign of a good art piece.

I felt sucked in by it. Ten minutes had gone by and I realized I had been staring blankly at a woman spanking a monkey. The sign of a good art piece. 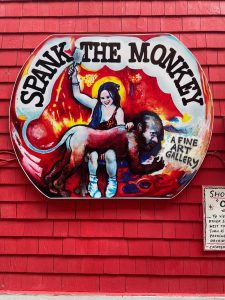 The other side can only be described as a broken mural made of wooden pieces. Little was actually painted on the wall of the building. Instead, different pictures were painted on individual pieces of wood, cut out and separate from each other. Some pieces seemed faded while others still held the bright colors like the front of the store. The general aesthetic of it all was, in a word, provocative. It was naked, sexy, confusing, primitive, and vaguely religious. I think it was best said by a middle-aged New England mom next to me. When she saw a piece that depicted an old woman, naked, holding a severed head she exclaimed, “Oh God!”

Oh God, indeed. I went inside Shop Therapy to get more reactions. The store is an art installation in its own right. Much like the art piece on the side of its building, it was an overwhelming jigsaw of products with rainbow pride colors. I approached the cashier with a couple questions. When I mentioned the article he waved over Joey Mars. Wearing a trucker hat and rocking an excellent Covid beard, he took me through the history of this art installation with the charisma of a museum tour guide who has been at it for years. 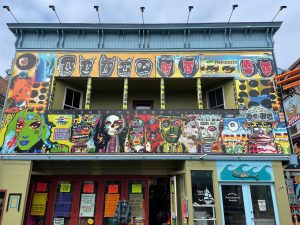 He first pointed to the sign in the corner right before the alley started. The alley is officially called the Bob Gasoi Memorial Art Alley. Joey went on to explain that the project was made by local artist Arnie Charnick along with help from other artists like Joey and his assistant Bo Johnson. The heart of the alleyway are the wooden pieces done originally by Bob Gasoi in the 80s. Joey paused, deciding how to begin the story. Then he started by saying the one piece of information I already knew. New England was cold.

Cape Cod sticks out in the middle of the Atlantic. Every winter, most stores board up their windows. The town, frustrated with the ugly look of it, asked if Shop Therapy could add some art to their boards. Ronny Hazel, the owner of Shop Therapy, asked Gasoi to paint the boards. Gasoi painted scenes from the Bible, greek mythology, and his signature Alice in Wonderland depictions. He painted faces of the Shop Therapy employees on the figures. The pictures were violent, crass, often nude, and not so ‘family friendly.’ A far cry from the watercolors of the beach. I later asked Ronny if there was controversy about these paintings in the conservative 80s. He gave a shrug and rolled his eyes, “Yeah you can google it.” I did. Yeah. They were annoyed.

Gasoi painted scenes from the Bible, greek mythology, and his signature Alice in Wonderland depictions. He painted faces of the Shop Therapy employees on the figures. The pictures were violent, crass, often nude, and not so ‘family friendly.’

Joey was taking me through this history and pointed out specific paintings. He wistfully pointed to the faces and recounted the employees that they were based on throughout the years saying, “These ones that are faded and a darker color, are the original ones.” He explained that Shop Therapy had moved buildings and the boards were stored away. Gasoi passed away in 1997. The boards were taken out of storage to make up what is now the alley: a mix of Gasoi’s original work mixed with work from newer artists. All of it overwhelmingly beautiful, loud, and at times, hilarious.

Joey took me to the meet the owner, Ronny Hazel, whose office was on the top floor right through the sex toy section of the store – Shop Therapy does have everything. Ronny had cool uncle energy and a Capricorn sign right above his office door. His office had pieces of arts, statues, and knick knacks. When I asked about the alleyway he expressed, “I hated the idea of the boards sitting there, rotting away. I never got rid of them. I never let go of any piece of art someone has done for me.” Ronny talked about Gasoi training in Italy; the classicism can be seen in his paintings. He discussed how Gasoi strived to be anti-establishment, yet he lived in Ptown. Thus, he needed to sell art to tourists who weren’t looking for a naked grandma painting in their beach house.

When I asked about the alleyway he expressed, “I hated the idea of the boards sitting there, rotting away. I never got rid of them. I never let go of any piece of art someone has done for me.” 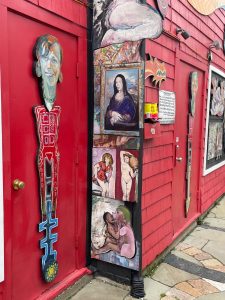 In the middle of our conversation Arnie, the creator of this alleyway, stepped in to talk to Ronny. Ronny explained I was writing an article to which Arnie leaned in quickly and said, “Do you need to ask me questions?” He had something in his hand and he looked like he had one foot out the door. I assured him Ronny could answer most of my questions. He nodded and said, “Have a good one!” and was gone before I could click my pen. I thanked Ronny for his time. He gave me his address and said, “Take a look at my yard.” Now that’s a whole other article. Let’s just say, he really never gets rid of any piece of art. I took my leave through the sex toy section back into the much less fun real world. Except when I got to walk past the alleyway again.

The alleyway during the summer was always packed with people taking pictures. Even on this dead grey day in the middle of the off-season, a few people still lingered around the alleyway. Ronny had said he never anticipated this. “It’s totally thrilling. I mean, obviously it’s good for business, but just the fact that so many people see it.” He continued to think out loud, “They have no clue what they are looking at but they are looking, and they are in awe.” It’s as if he pulled the words from my eyes. Yes, that’s what the alleyway felt like. It felt like awe.

Before I knew the history of the alley, it still felt like awe. It felt like a meld of a million different things, each one screaming louder than the next, yet, coexisting without conflict. The alleyway wasn’t an alley at all, but a tower. The foundations made by Bob Gasoi, the structure built by Arnie Charnick, and continuing floors made by new pieces from artists new and old.

It felt like a meld of a million different things, each one screaming louder than the next, yet, coexisting without conflict. The alleyway wasn’t an alley at all, but a tower.

As I left Shop Therapy, I took one last look at the alleyway. White pieces of wood now leaned up against the walls. Below, buckets of paint. In the back, a ladder and Arnie. He didn’t have time to answer my questions because he was giving me more questions to ask. He was adding more to the Bob Gasoi Memorial Art Alleyway. The tower continues to grow. Layers of mythology, sex, swear words, and colors. All thanks to a man who refused to paint boring pictures on boarded up windows, the shop owner who asked him to, and the artist who gave it a new place to live. 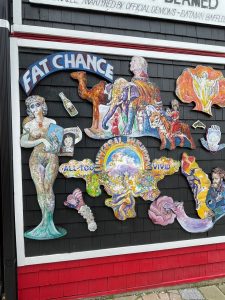 I didn’t interrupt Arnie’s work and walked by quietly. When I come back during the summer, there will be new pieces. I can’t wait to see it. What a beautiful punch to the gut. 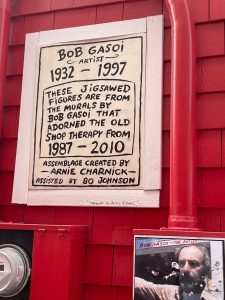 Erin is a writer and comedian from New Hampshire. She has a Bachelor’s of Arts from Emerson College and is enrolled in Columbia College of Chicago’s graduate program in Nonfiction writing.