Kindness is a virtue, but more importantly, it is a choice. Sometimes in the hustle of the city, it can be easy for this simple message to be thrown to the wayside. That is until a tiny blushing T-Rex holds the message between its wee claws and offers to share it with the world or at the very least an armada of disgruntled NYC commuters. Bubble Tea Rex, an adorable green dinosaur sticker, created by D. Wei, can be found in all the usual nesting spots of stickers and street art throughout NYC.

Given how bundled up we’ve been against the winter chill, it seems appropriate to remember a warm conversation on an even warmer day with D. Wei. Over the summer, we met up at Freeman Alley in the Lower East Side to talk all things street art, art therapy, and, of course, Bubble Tea Rex. 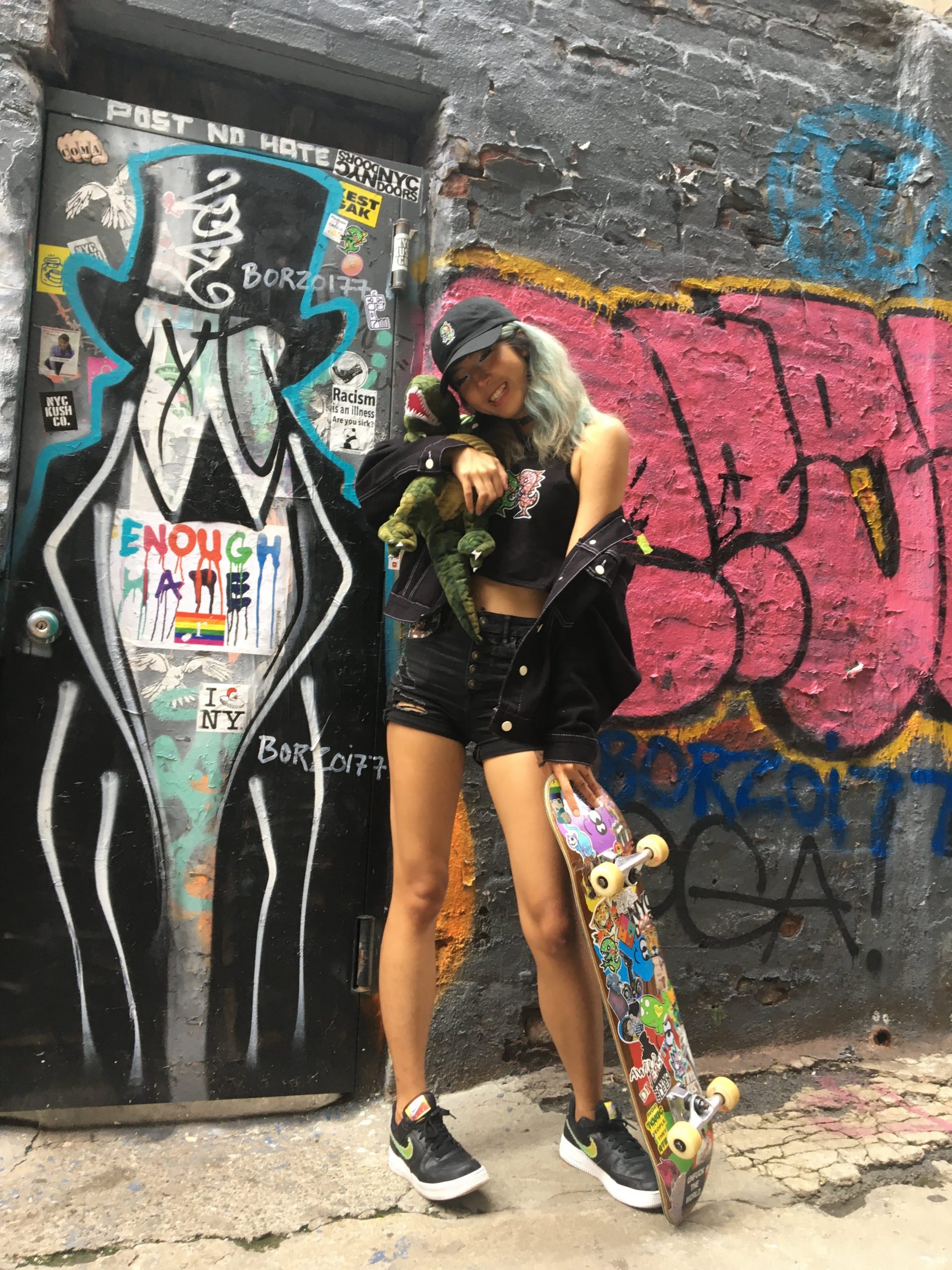 How did you start making Bubble Tea Rex?

I always wanted to do street art but I also wanted to have something that’s very recognizable and people can see it and know that’s me. But I still haven’t had any ideas yet so I never started. And then during the pandemic, I was bored at home and one day I just drew my backpack and the dinosaur and that just became so popular that people be like, “Oh why don’t you just make it out of a sticker.’ I wanted to do a sticker but I also wanted to spread some messages so that’s why I put “Kindness is a choice.” That’s how I started and then people started to like it and wanted to buy hoodies and some merchandise of that. 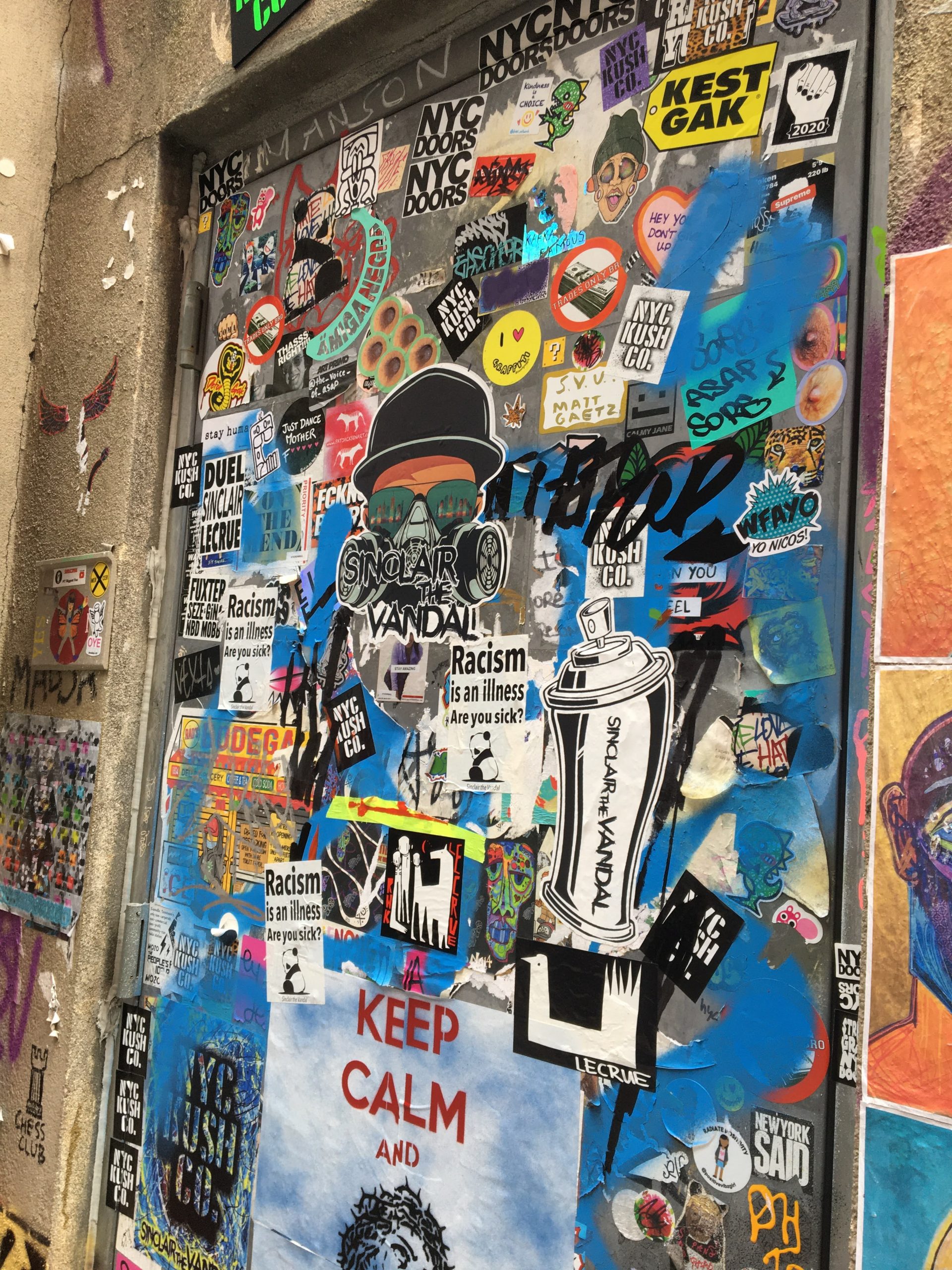 I wanted to do a sticker but I also wanted to spread some messages so that’s why I put “Kindness is a choice.”

Where did you get the backpack from if that’s the inspiration behind Bubble Tea Rex?

I got it from Taiwan. Right before Covid, so last year.

I saw that you collaborated with different artists like Monsters Are Messy. How did the collaborations come about?

I forget how we started but he’s the only one who’s not in New York. Most of the people are based in New York.

Where do you meet other artists? Are you friends with them or maybe you meet at shows?

We are like street art friends so we saw each other’s artwork and we tag each other but we never how each other looked like. If we are going to send each other stickers, we just mail them or put it somewhere and then we will find it. So no one really knows how each other look like which I really like that kind of culture.

How did you get into art in the beginning?

When I was a kid, I never went to any art school so I’m self-taught. I was a nurse but I also wanted to do art as well. I became a nurse because my family didn’t support me to do art but the more that I studied nursing, I realized I wanted to do art more. Also, I wanted to help people at the same time. I found out there’s a job called art therapy so I can do both.

“The more that I studied nursing, I realized I wanted to do art more. Also, I wanted to help people at the same time. I found out there’s a job called art therapy so I can do both.”

When did you move to New York and what was that like?

Three years ago. In the beginning, it was hard because I came for a full semester and it’s not my first language and I came here by myself. And everything was difficult. Also, I met a lot of mean people. I just didn’t know that people can use other people like that so I got very stressed out my first year but now I’m good. I’m used to it.

How did you come up with the name Bubble Tea Rex?

I wanted to create this series of all the dinosaurs and their names all relate to bubble tea so my second dinosaur, I have a new one and she’s Triceratops so I call her Tricera-tapioca.

I like brown sugar milk the most but I also like oolong milk tea with no sugar and I also like Matcha so top three of my favorites.

Did you know Taiwan is the country that invented bubble tea? So I’m pretty picky with my bubble tea.

What’s the process you go through in creating Bubble Tea Rex?

At the beginning, I was drawing every sticker by my own hand every day and I was at my friend’s house. I would draw 20 dinosaurs a day and put them up the next day. And she was like, ‘You drive me crazy, why don’t you just make stickers.’ And I was like, ‘Because I don’t know how to use photoshop’ and then she was like, ‘Come, here, let me help you.’ And then she helped me and that was my first sticker. It looked pretty rough.  I want to make it more smooth so I started to learn how to make digital art. That was all last year. So now I have some commissioned art that they want me to do digitally which is good. Because also if I want to upload it to hoodies, it has to be digital as well. 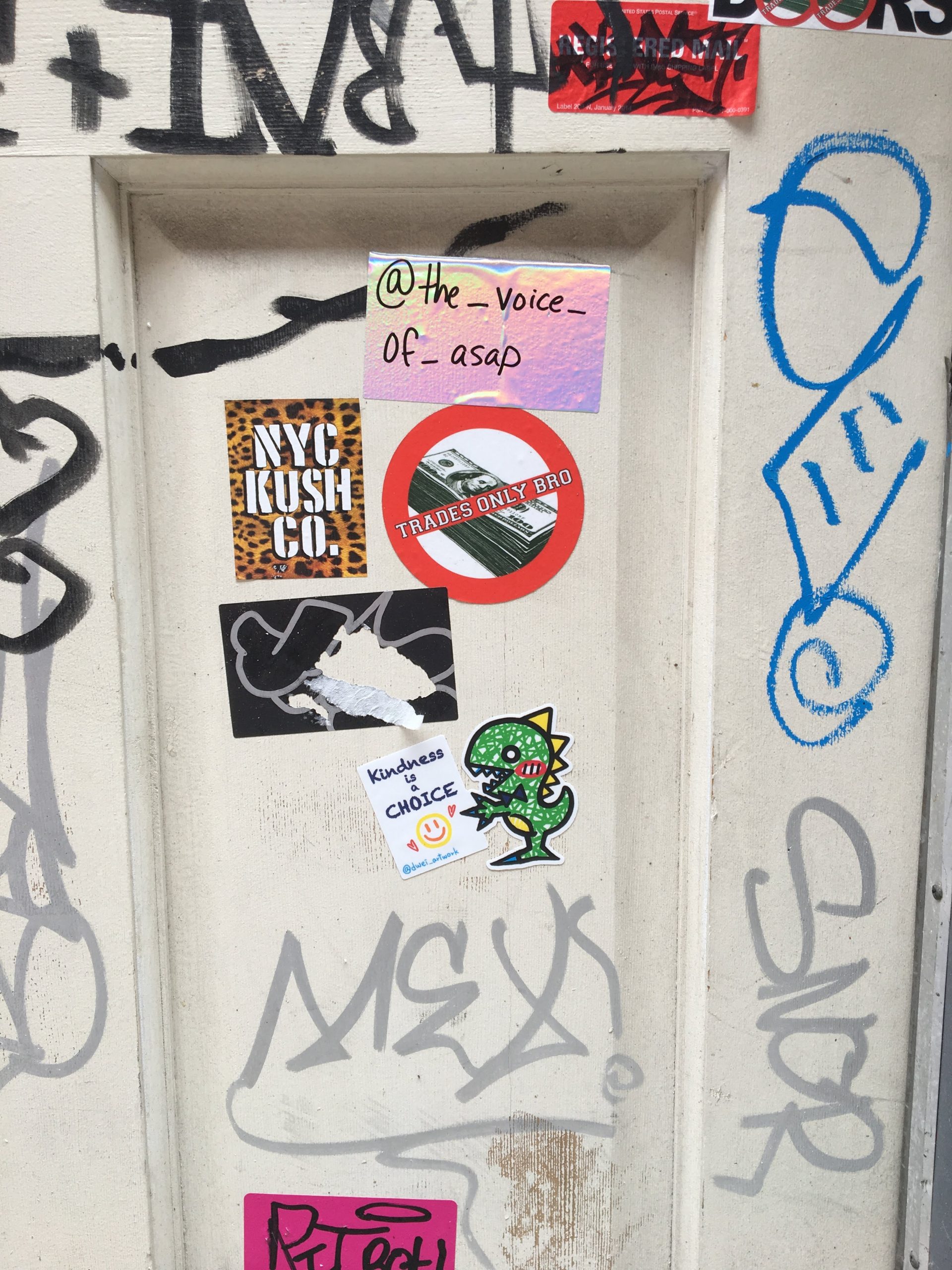 How did the transition from stickers to clothing happen?

Some people asked, ‘Do you have hoodies?’ and then I just tried it out. I posted something that I wanted to make my first order and if anyone was interested let me know. They came out pretty good and now I have ordered several times because people keep wanting to buy them. I didn’t charge too much because, in the beginning, people ordering were my friends so I didn’t want to charge my friends too much. I even gave them for free on my first order and people were like, ‘You need to stop doing that because you are not making money.’ It’s hard, I’m still figuring it out.

When I started my online shop, one day I realized that the more that I sell, I was losing more money. I was like, ‘What? I need to stop.’ And then my friend, he knows business, he said show me your Excel. Type it down and see what’s up.

Do you have any artists that you’re inspired by right now or would like to work with them?

Monsters are Messy is definitely one of my favorites because he also has a different style of art. I particularly like his characters. I really liked transferring his character into my style. 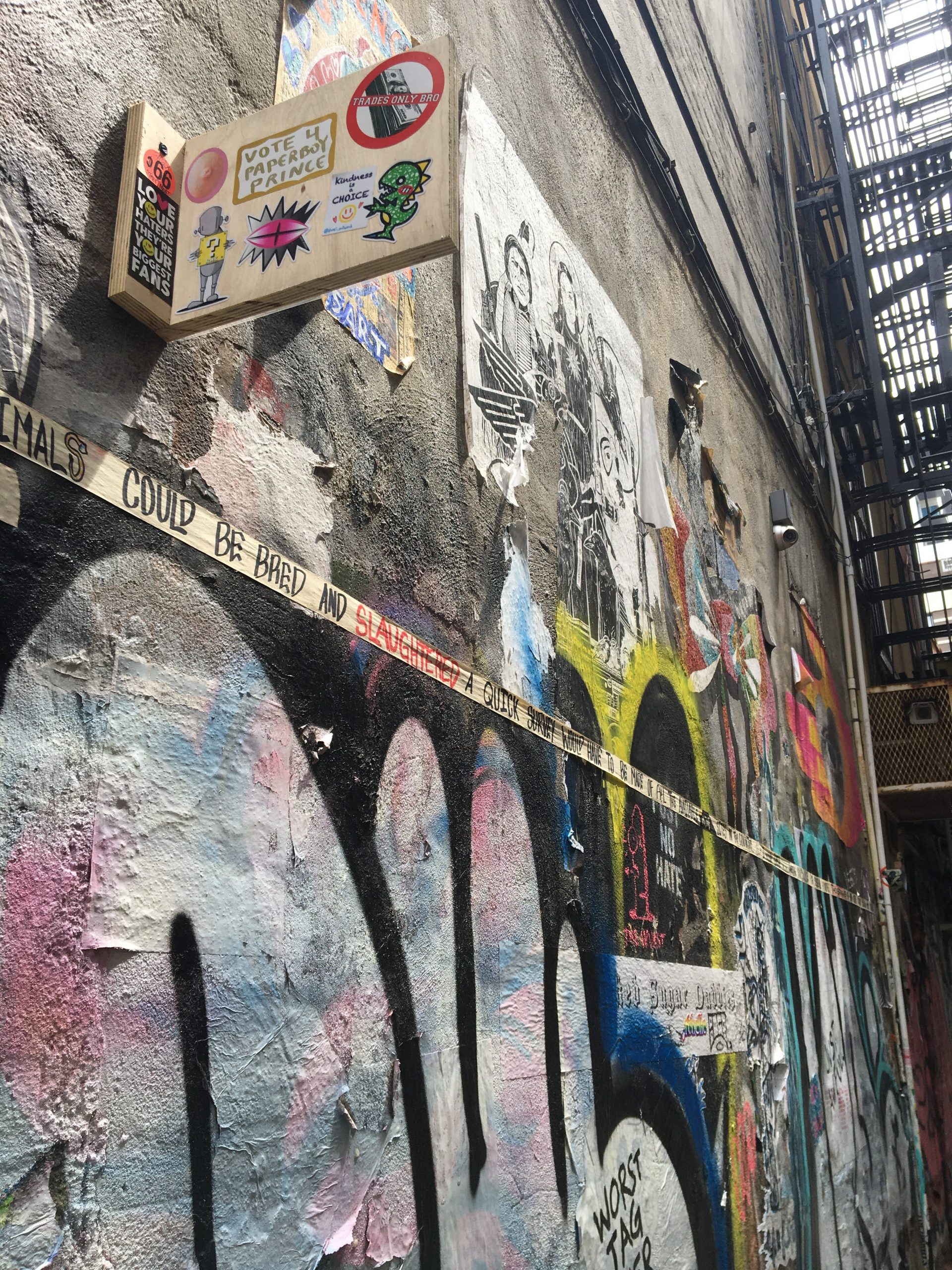 There’s a cartoony style to your work and his work. Did you have any cartoons that you watched as a kid that you really liked the style of?

I’m still obsessed with cartoons. A lot of my artwork is based on them. When I was a kid, there’s too many. I think Powerpuff Girls was definitely one of my favorites. Now, I know people are into Anime more but I’m into American cartoons more because I like the style of it.

Do you listen to music when you make art?

I used to listen to heavy metal but I’m also a huge fan of Disney so if I wanted to have happy vibes, I would listen to Disney music a lot and because I like to sing to them but none of my dates enjoy Disney songs that much so for that I would have to do it at home and just sing by myself. But I also have my own patterns and don’t want to get interrupted

When I was growing up, I felt like because they had stories, I feel like Disney villains are not really villains. They just look badass but they are not really that bad. I think that’s how I see myself because when I was a kid, I had to make myself look tough to protect me and my brother. 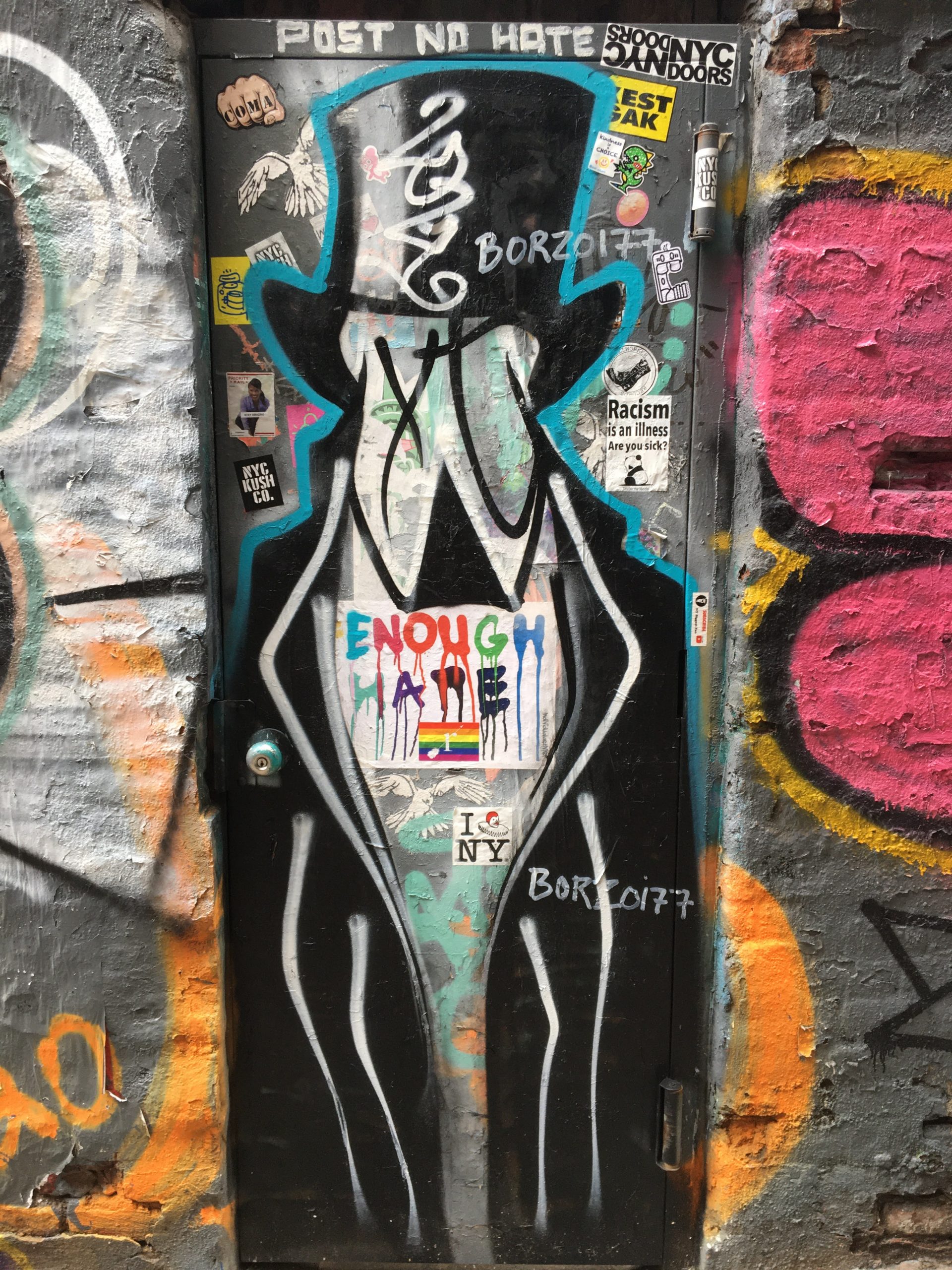 What do you think about the street art scene right now?

I really like it. I feel like it’s very welcoming. When I first started, I liked how we don’t know how each other looked like so we just see the artwork. That’s it. I don’t want to say that I’m pretty but most of the people if they see me, they don’t think I am able to do art or something because I do modeling too and like oh that person makes money out of body. And sometimes, they said, ‘Oh I don’t even know if you can make art. I don’t even know if you are smart, if you are nurse, if you have an art therapy degree.’ Just because you see my face doesn’t mean I’m not able to do all that so I like that we don’t know how each other look like. We just appreciate our art on the street.

Just because you see my face doesn’t mean I’m not able to do all that so I like that we don’t know how each other look like. We just appreciate our art on the street.

What do you like about being an art therapist?

I like that I know how to help people with art and then I actually have the skill to do it.  Because a lot of people thought art therapy just doing art with them and that’s it but there’s actually so many clinical reason behind it and is a professional license stuff so it’s not like everyone can do it. But because every time people hear me doing art therapy and people be like ‘Oh, artist’s therapist’ and I’m like I know, but it’s a different thing. Like you can do art to make yourself feel better. That’s also part of art therapy but you need someone who’s professional to help you process and know something behind it and talk about this. So I like that I have the skill about that so it’s deeper.

What do you want people to take away from Bubble Tea Rex with his messages?

I feel like that phrase is really important to me. I also have a tattoo of it: Kindness is a choice. It’s in German. But that’s because I had a pretty difficult childhood and then I think that’s the phrase that kept me on the right track and then I feel like everybody should do it because there’s too many people, they try to not get hurt so they hurt other people first.

Before I moved here, I still believed in people like they always have a good thing inside everyone but then moving here, I really get hurt a lot so I say something like very dark before like I think I’m going to lose all my faith for New York, I’m not going to try to be kind anymore. I said that because I was upset but it was what I thought at that time. I think I still believe that that small message can remind some people to be kind to other people.

Far from being extinct, this little dinosaur has the power to spread a message of kindness in all its iterations.

Madeline Katz is a writer currently based in New York. Her articles and short stories appear in Fordham University’s The Observer and Grain of Salt Mag. She enjoys seeing the layers of street art build up around the city as they constantly change. She is currently intrigued by the aesthetic discourse surrounding the differences between Posca and Krink markers.