Buenos Aires: Bardo, Ilka, and the Beauty of the City

Buenos Aires is a vibrant city. I moved there when I was seventeen. Our love affair lasted eight years and became one of the most momentuous experiences in my life. Noisy nights filled with avante-garde electronic music, reggaeton rhythm and tango melodies… until the sun warns you that it’s time for breakfast before bed. After a quick nap and a hot coffee, the 9-5 madness begins. Young professionals, stylishly dressed make their way to the office. You can smell ambition on the streets.

Currently, I live in London and sometimes the nostalgia of ‘Mi Buenos Aires Querido’ blurs my sight. In an attempt to reconnect with my roots and this wonderful culture, I reached out to group of emerging female street artists from Argentina who perfectly capture my perception of Buenos Aires.

In an attempt to reconnect with my roots and this wonderful culture, I reached out to group of emerging female street artists from Argentina who perfectly capture my perception of Buenos Aires.

They are Cala, Iliden, and Manu—a collective of childhood friends who, who spent time working in different fields, until they decided to band together to heed the artisrtic call. 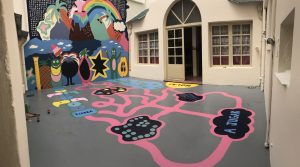 Cala was a lawyer working at the magistrate court with a lifelong interest in art. She felt she wasn’t living up to her potential, and her structured life was growing tedious. Ready to take a risk, Cala attempted to pursue a degree in fine arts, but decided not to finish it as her street art career grew. Iliden had studied graphic design and described her experience at university as “an experimental time,” but when she joined the workforce, she realized that being inside an office all day designing was not enjoyable. She wanted to spend time creating with her hands and went abroad to take a graffiti mural seminar for seven months in Barcelona. Meanwhile, Manu was a fashion designer with a penchant for painting. When I asked how her degree helped her become a muralist, she said “it is the same process in regards to coming with a concept and trying to portray it in something that is not abstract.”

By purusing their passion as a team, they gave birth to two inspiring projects: Bardo Somos and Ilka Murales.

“Bardo” comes from Argentinian slang in the Buenos Aires region, the language of tango. It means “mess, chaos, wreck.” “We consider playing, having a lucid spirit and experimenting an essential part of the process while creating,” Iliden said. “This lucid spirit is really important to us, and we think it is lost when you become an adult” Manu emphasized. 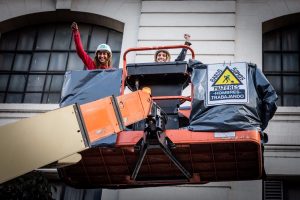 “This lucid spirit is really important to us, and we think it is lost when you become an adult.”

Ilka, their second project, is more of a strategized business. Even though they share the same artists, Ilka is geared toward a more commercially organized brand that tries to meet their clients expectations and needs. Bardo appeals to their creative instincts, while Ilka is shaped with a business mindset.

Ilka and Bardo began germinating as concepts on a trip the group took to Berlin back in 2015. They inhaled the sweet liberal Berlin vibes, touring around the city, making a point to visit street art hot spots. They felt certain street art was going to define their future careers. But though the plans began in Berlin, they were born in Buenos Aires.

“After our experience painting in Europe, where you have so many places that have a deep cultural heritage, there’s also many procedures to get a permit to paint, and so little space to do it, we decided Buenos Aires was going to be a better place for us,” Iliden explained. Manu added that “we have a wider network in Buenos Aires and no language barrier, so we thought it would be better to start here and travel when some opportunity comes out abroad.”

Buenos Aires, with its eclectic and rich culture mixing classical and modern features, served as the perfect homebase for the artists. This is a city that was once hailed as ‘The Paris of Latin America.’ Avenida de Mayo embodies ‘la belle epoque,’‘ with the famous building ‘El Palacio Barolo’ the citie’s equivalent of the Eiffel Tower. Designed by Italian architect Mario Palante and influenced by Dante’s Divine Comedy, El Palacio Barolo was once the tallest building in Latin America.

Buenos Aires, with its eclectic and rich culture mixing classical and modern features, served as the perfect homebase for the artists.

Part of Buenos Aires’ charm is its artistically inclined soul. The Recoleta nieghborhood is host to a slew of classic cafes, such as ‘La Viela,’ right across the Recoleta Cemetery, where Evita rests. Internationally-known Argentinian authors like Jorge Luis Borges, Julio Cortazar, and Adolfo Bioy Casares used to spend time in this district, writing some the nation’s greatest literature. The eclectic Palermo area, full of youthful energy, is where street artists put their most grandiose ideas alongside alleyways and elite fashion boutiques. Constant reinvention and an edgy, artistic flair have made led some to compare the district to Brooklyn.

Artistic expression has always been a big part of the city’s identity, even when freedom of expression was not granted under the dictatorial government of Videla. During his reign in the 70’s, many musicians like Luis Alberto Spinetta, Gustavo Santaolalla, and León Gieco went into exile, but dedicated their music to the beauty of their homeland, while Charly Garcia, the king of Argentinian rock, stayed and became an active opponent of the atrocities that took place under the Videla Regime. 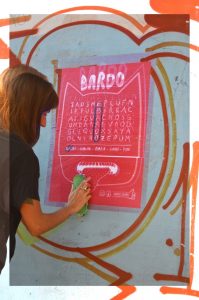 The language of art is still an essential form of social protest and rebellious manifestation. I have always associated graffiti with the the rebel spirit, those who are passionate about their ideals and wants to change the system. In Bardo and Ilka, Cala, Iliden, and Manu made a place for themselves in a career that was historically male-dominated. Beyond this empowering represation, that often use their work as a tool for change.

As activists, the crew has two causes they are particularly committed to: children’s rights and gender equality. They started a campaign with the slogan: “Arrancar los techos,” which translates to “Get rid of the ceiling,” a project which involved painting the ceilings of the pediatric section of the Hospital Elizalde in Buenos Aires. The goal was to stimulate imagination in the patients through games, shapes, and colors. Each of the rooms had its own theme, and the children are given a laser-pointer so they can solve the games directly from their beds.

As activists, the crew has two causes they are particularly committed to: children’s rights and gender equality.

They also participated in a campaign on Women’s Day 2019 and again in 2020 in their hometown, of Mercedes, Argentina. Alongside “La Casa de la Mujer” (Woman’s House), they ideated a slogan and painted public spaces to promote gender equality: “Callar duele más,” (Staying silent hurts harder). “The three of us believe in gender equality, freedom of choice. We consider ourselves feminists,” Cala said on the matter. 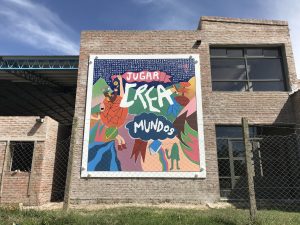 I wondered if they felt this gender gap, which exists in almost every profession, was narrowing. “Once we got invited to participate in a festival organized by the City Council of Buenos Aires in ‘La Usina del Arte.’ To complete our mural, we would need to use a crane that the city was going to provide for us. They would train us to use it as well. When they saw we were girls, the trainer asked if we were sure we didn’t know a man for the job he could teach instead,” Iliden told me.

“Also we had this sign that said ‘Man Working,’ accompanied by a picture of a man lifting a shovel. We crossed over man, and wrote woman. The photographer of the festival thought it was really impactful and took a picture of us for the website. Weeks later, he said that his editor wouldn’t approve because it was a rather violent message,” said Manu. Despite experiences like these, they are optimistic that the art world is changing in a positive way.

I was interested in their creative process and where they find inspiration. “Our inspiration varies depending on the job. We love to get ideas and patterns from different tribes. Some of Latin America, but African tribes are the ones that we connect the most with,” Cala shared with me. 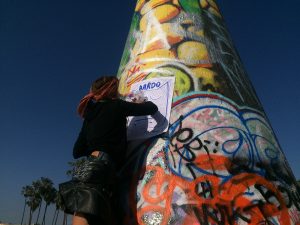 “Our inspiration varies depending on the job. We love to get ideas and patterns from different tribes. Some of Latin America, but African tribes are the ones that we connect the most with,” Cala shared with me.

“We have some classic artists that we follow and are obsessed with, like Matisse, and the surrealists, most of them,” Manu added enthusiastically. “And of course, each of us individually have our own life, experiences, and memories from travels. That helps us form ideas during the process of creating,” concluded Iliden.

The very core of the method remains the same. Together they have proven that street art is resignifying spaces, rather than vandalizing them. Art is a bridge that connects us all.

In the worldwide context, Buenos Aires is recieving greater recognition for its artistic contributions, thanks in part to artists like Cala, Manu, and Ilken. The city’s European influence has impacted its culture, but that energy has been transformed into something new. We are the sons and daughters of immigrants, of native Argentines, and the fusion of them. As a young country, we have a constant need to redefine our identity, the rebel child that manifests on the streets. Having only recovered our democracy thirty-seven years ago, Argentine’s feel a divine need for expression, whatever form it may take.

We are the sons and daughters of immigrants, of native Argentines, and the fusion of them.

Buenos Aires continually recreates itself, an environment of excessive creativity, sharpened by the lack of resources. For many young artists, the stakes taken are high, but the reward is  a constant feeling of adrenaline that feeds the creative process as a new beautiful project finds a way to be born.