This is Part Two of a series on Denver, CO street art. Read Part One here.

The woman on the Denver, Colorado alleyway wall watches passers-by with solemn, expressive eyes as she wields a sword. This is Denver-based muralist Casey Kawaguchi’s character who appears in nearly all of his paintings. As an author, I’ve spent a great deal of time coming up with characters for fiction, but “characters” in the medium of street art tend to lean more towards frequently occurring visual figures than developed people meant to seem real. And most are abstract or cartoonish by nature of needing to be in a medium more based on quick visual engagement than storytelling. Kawaguchi’s character is an exception. Though many walk by and only glance at her, she has a layered backstory and Kawaguchi’s brushstrokes conjure up a rich emotional landscape beneath the paint.

To create this vivid and striking character, Kawaguchi’s process was quite similar to my own as an author. “My character is a type of person who’s different from me,” he explained, something familiar to me given how fiction often lets us explore other parts of ourselves through the lens of others. “She helps me disconnect from the art a little bit. But at the same time, it is a self-representation.” This is a delicate dance any storyteller does between their own personal identity and their work, and for Kawaguchi, expressing himself through a female figure allowed him to access other parts of his creative identity. “I wanted to connect with my reality through the Japanese aesthetics and honor my family, but also represent myself,” he said. 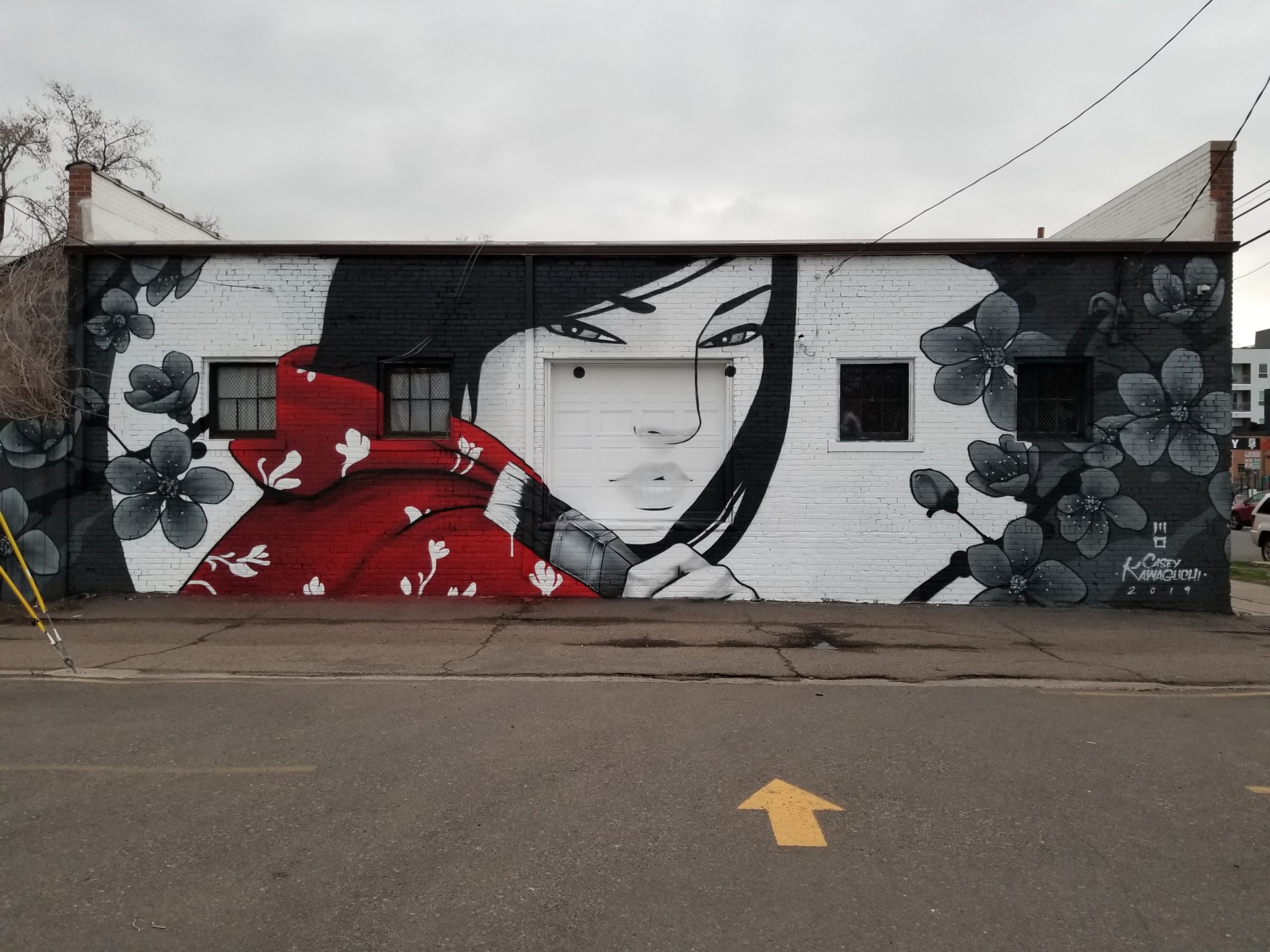 “My character is a type of person who’s different from me. She helps me disconnect from the art a little bit. But at the same time, it is a self-representation.”

I was introduced to Kawaguchi by Lorenzo Talcott of ILA Gallery, and I met him at his workspace in Allegory Studios on a bright Colorado afternoon. Allegory Studios also houses Chris Haven and Patrick McGregor among other artists, and the studio balances large communal artmaking spaces with cozy individual studios. Kawaguchi’s studio walls were plastered with sketches, woodcuts, paintings, and graffiti, a perfect example of the kind of controlled chaos experienced artists’ studios always have.

A standout piece is Kokoro, a woodcut shaped like an anatomical heart which features Kawaguchi’s female character peering out from behind a flowered branch, with the petals of the flowers shaping the valves of the heart. Kokoro was originally shown in the downstairs space at Allegory Studios for a group exhibition titled A Matter of Heart, in which every painting was to be shaped like an anatomical heart. 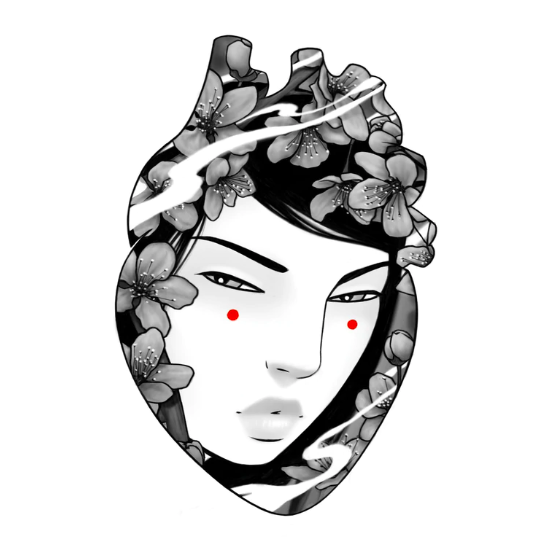 Kokoro was just one of the multimedia iterations of Kawaguchi’s character. Her appearance traces back to Kawaguchi’s early influences growing up in Salt Lake City, Utah Marvel comics, playing video games, and drawing fantastical illustrations of ninjas. “All of my family’s aesthetic in our house was Japanese-inspired and our Japanese traditions have a lot of character,” he recalled. “And I was always inspired by my brother, who made these amazing photorealistic drawings.”

However, the woman now made iconic by his street art was loosely based on the samurai memorabilia in his grandmother’s home in Utah rather than a fictitious superhero. “Two generations before my grandma, my family were samurai,” Kawaguchi said—so the woman on the walls is not just a pastiche of the fiction that inspired him, but from his own roots. 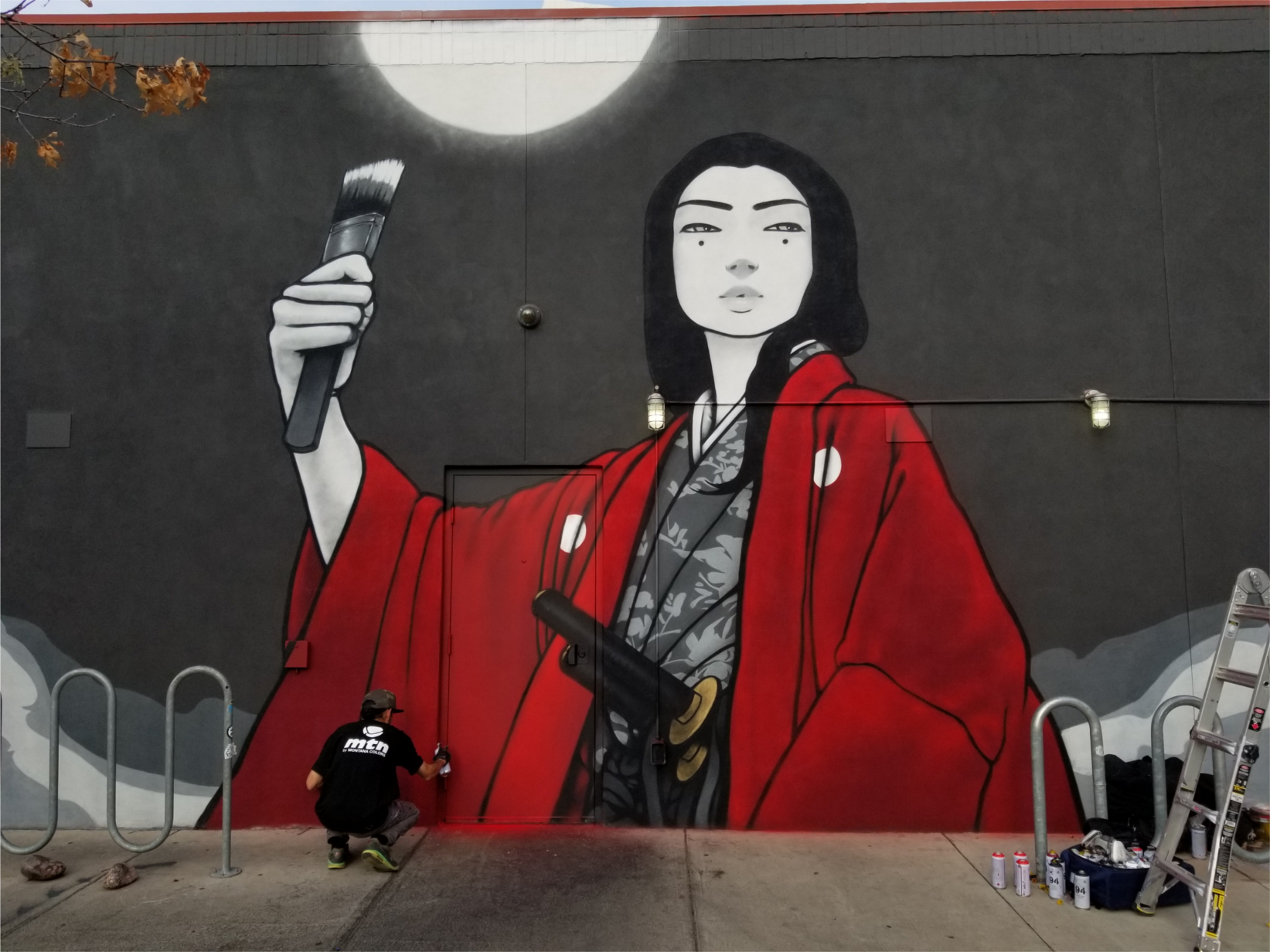 “Two generations before my grandma, my family were samurai,” Kawaguchi said—so the woman on the walls is not just a pastiche of the fiction that inspired him, but from his own roots.

Yet in Japanese history, female samurai were rare. Kawaguchi’s art balances femininity and strength in an uncommonly explored perspective. The woman’s serene demeanor in her facial expression doesn’t hide the pride and grit she clearly carries herself with, expressed by the dynamic linework Kawaguchi puts into his paintings. That pride originates in Kawaguchi himself. His work explores the dialogue between the past and the moment that was always present in his own upbringing. 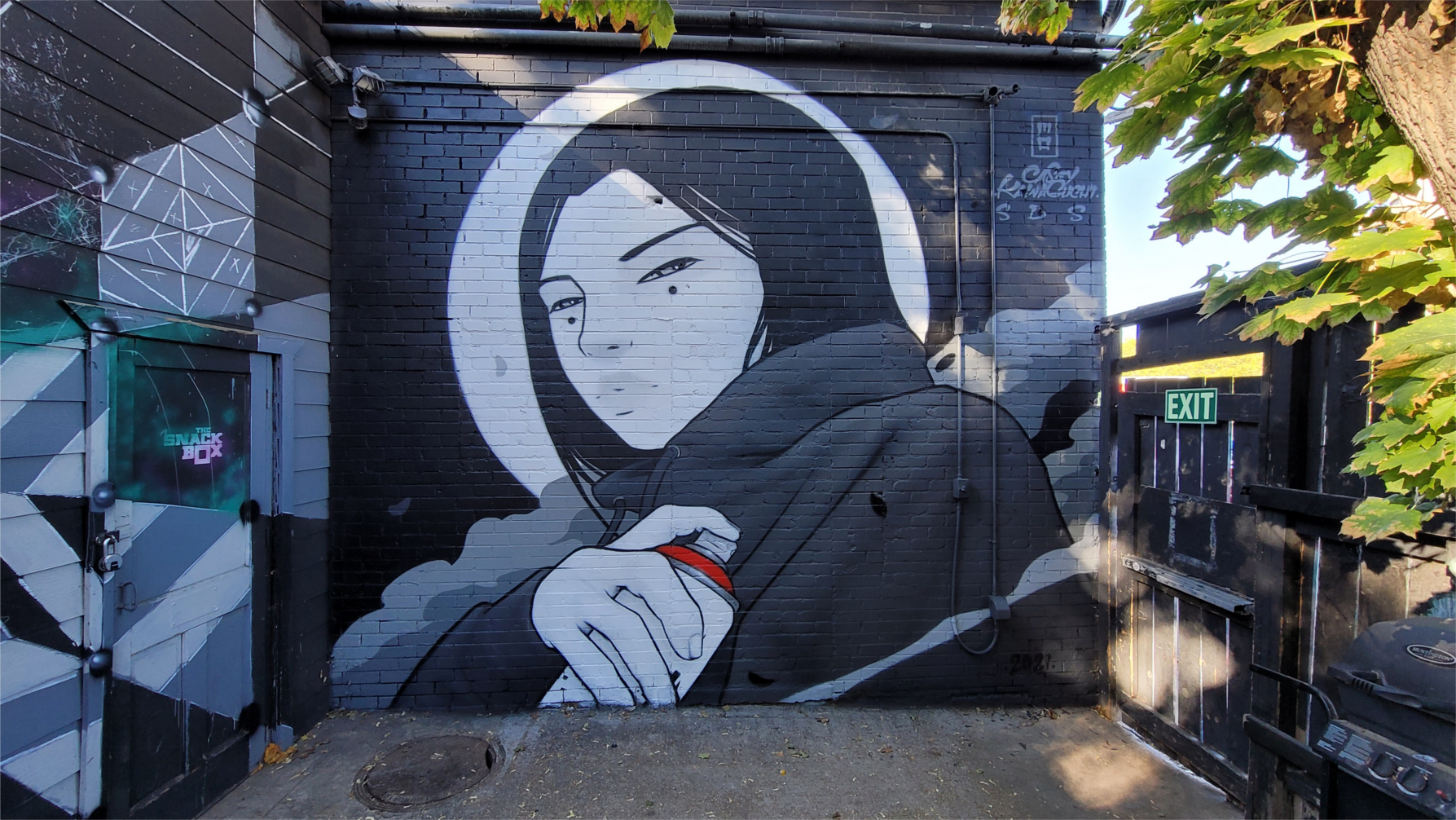 The woman’s serene demeanor in her facial expression doesn’t hide the pride and grit she clearly carries herself with, expressed by the dynamic linework Kawaguchi puts into his paintings.

“My great-grandpa moved to Utah from Japan four generations ago,” Kawaguchi explained. “He was one of the first Japanese people in Utah, and he owned a farm that other Japanese people were able to stay at and get themselves established,” he recalled. Kawaguchi’s experience as a yonsei or fourth-generation American meant that his family didn’t feel like a minority, and only later did he learn about the complex history of Japanese presence in Utah and just how deep his family’s roots ran in the region.

His family’s longevity created both connection to the past and a distance from it. “I went to a museum on a field trip one time, and I saw a case that had two kimonos in it and some other Japanese items. But when I looked up close to it, I saw it had my great-grandmother’s name on it,” he reminisced.

“I talked to the lady at the gallery about it, and she had a connection to my family. My dad never told any of my siblings about it, and none of us had ever been there.” This anecdote powerfully illustrated the way that objects, whether art or historical, have individual meanings that change when they’re displayed for view. With his art, Kawaguchi takes control of the narrative and shows how multicultural pride is not a simple thing. It’s a patchwork of experiences and unanswered questions that make up a whole.

As we sat in his studio, I found myself completely losing track of time as we talked about everything from art history in Japan to Stephen King—Kawaguchi was a fan of “Apt Pupil,” a bone-chilling short story in the short story collection Different Seasons which explores how the corruption and moral decay individual power brings give rise to much more sinister actions. His own work draws inspiration from other art forms, namely writing and making music. “The thing I gravitated most towards in writing is the potency and simplicity of rhyme,” he said. “Certain old rhymes or songs have a wisdom to them.” 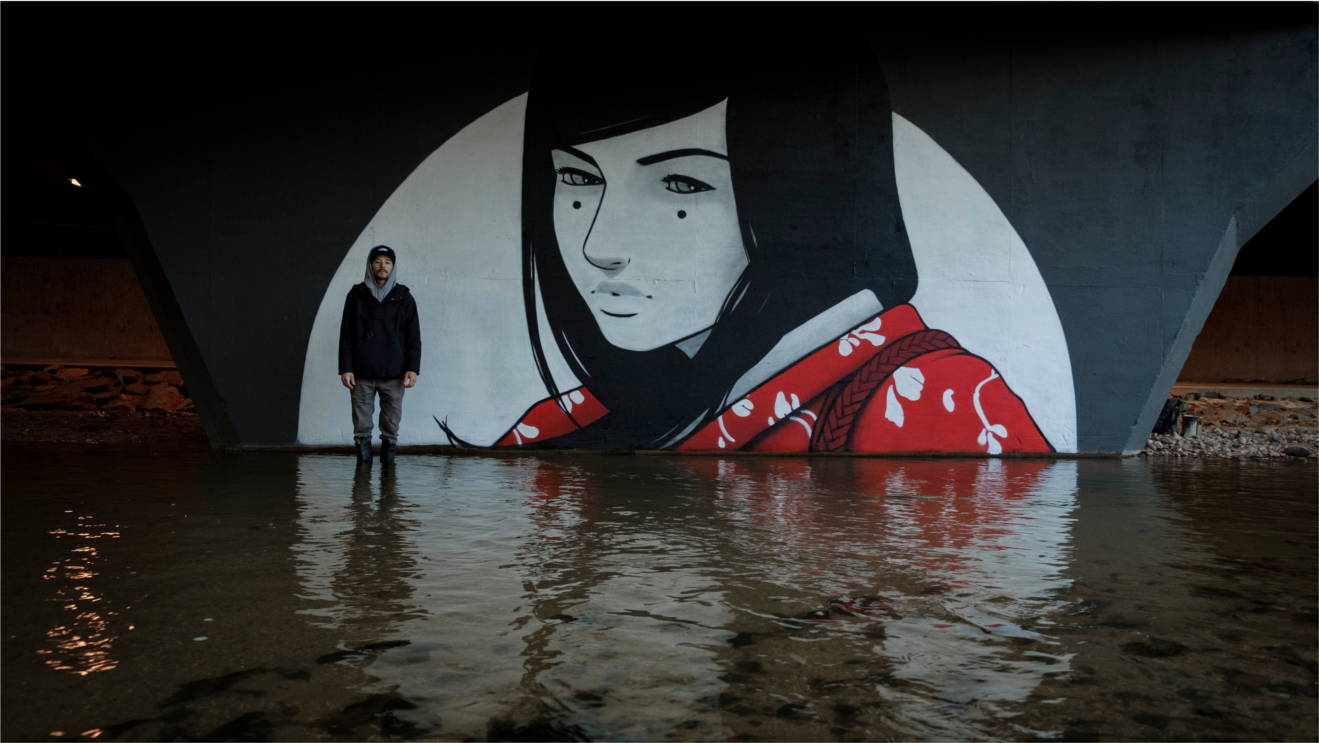 “The thing I gravitated most towards in writing is the potency and simplicity of rhyme,” he said. “Certain old rhymes or songs have a wisdom to them.”

That train of thought was how we ended up on Stephen King in the first place, whose simple, direct language often conveys electrifying emotion that more elevated, fluffy words can’t get at. “I love King’s ability to have the contrast of writing about totally horrible things, but then for them to have this beauty in them at same time. This contrast within a story is what I find attractive,” he said. That contrasts shows up in the multiple dualities that make up Kawaguchi’s work: strength and softness, the reality of Japanese identity and the depiction of Japan in popular culture, the individual experience of making art versus the collective experience of viewing it, and more.

His character’s eyes followed us as we spoke, from paintings where she was dressed in samurai helmets to a canvas that she shared with a black cat perched on her shoulder. Kawaguchi’s intelligence, creativity, and humility came through all throughout our conversation. His art has the magnetic quality that the best visual work has, this pull that keeps you asking questions and coming back to it. When I look at a work of art, wonder feels like a bit of a cliché word, but rather than wonder in the sense of awe, as I locked eyes with Kawaguchi’s character, I felt wonder in the sense of all-encompassing curiosity. A sense that the world is bigger than you will ever know it to be and that there is always more to explore. And that maybe all you need to do to access that world is to look inside yourself.

Casey Kawaguchi’s art is available for sale as merchandise on his site and will be on view at Beyond the Wall: Visions of the Asian Experience in America in Delray Beach, FL from 5/7 to 9/25.