This is the first piece in a series on arts and culture in Glasgow and Belfast. Future installments will be published on 8/18, 8/25, and 9/1.

The M8 highway slumps over the city of Glasgow like the skeleton of some long-dead ancient beast. There are a lot of things you could say about Glasgow. Chicken tikka originated there. It’s the home of the “Glasgow Effect,” a phenomenon in which local men die unusually young after brief lives of haunting dimly lit pubs and eating grease-stained fish and chips. At one point, one in eight ships in the world was manufactured on Glasgow’s River Clyde.

I arrived in the Glasgow airport woozy and delirious from flying over the Atlantic all night, and my former floormates from college who are now married drove me over the M8. I lolled my head against the windowpane and took in the colorless sky and beige stone buildings older than the United States. Without knowing it, we drove past the rooftop of Chris McCrory’s studio, just a stone’s throw from the M8 in the City Center.

I first met McCrory on a group camping trip in a remote corner of the Isle of Skye. He’s tall—my best friend who I’d come to visit describes him as looking like Shaggy from Scooby Doo. McCrory frequently passes out Tennant’s and Corona beers and jokes that as a Scottish man, the only way he can talk about his emotions is with beer. This isn’t entirely true, though, because McCrory is the frontman of local rock band Catholic Action and a well-known music producer in the United Kingdom. I became interested in writing about him when we sat at a small cove in Skye and made a campfire and discussed the role of organized religion in society. I’d spoken to number of artists in Glasgow, but all were expats. I wanted to get the perspective of someone with roots there, and I found myself writing down McCrory’s insights about Scottish politics, even outside of the context of a formal interview. 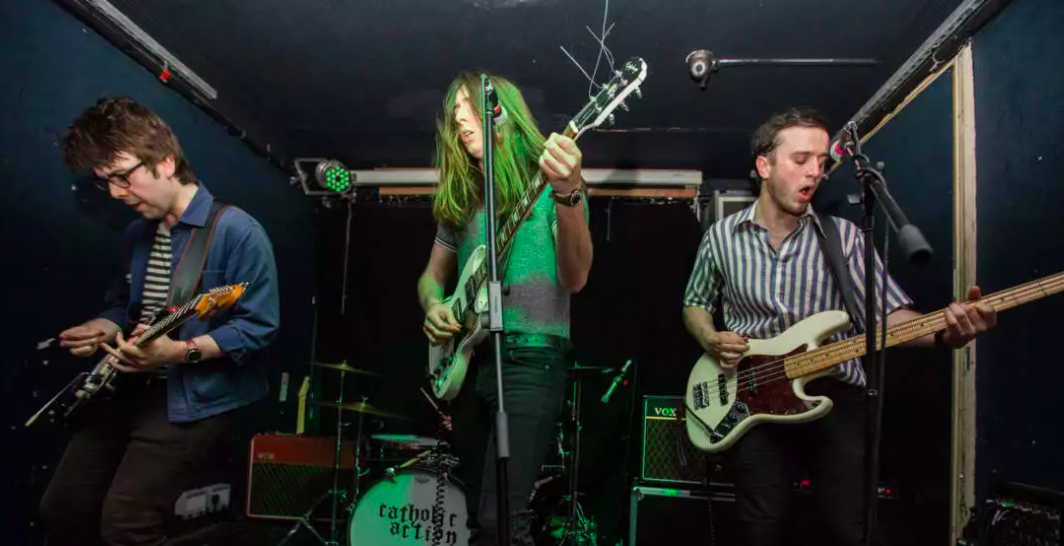 Most Americans don’t spend very much energy thinking about sectarianism in the United Kingdom, but for Scots, the presence of vitriol between Catholics and Protestants shows up in subtle, pervasive ways. “Sectarianism is really the worst thing about Scotland,” he said, recounting a story about how his father’s clearly Irish last name meant workmen he labored with spat slurs at him. The labels Catholic and Protestant in the United Kingdom are not really about what one believes, but rather the social, cultural, and political cues one falls in line with. Rangers or Celtics? Open or closed borders? Brexit or the European Union? Whatever similarities you might have are obscured by socio-cultural binaries.

McCrory’s band Catholic Action shares a name with an activist cohort known for provocative antiwar demonstrations, but that similarity is incidental. However, McCrory did intend to provoke with the name. “I was brought up Catholic, and I don’t regret my upbringing at all, but there were some times doing normal teenager things where I remember thinking I’d literally go to hell,” McCrory said. “Looking back on it, I find it really hilarious. So a ‘Catholic Action’ is something I’d either do or not do.” 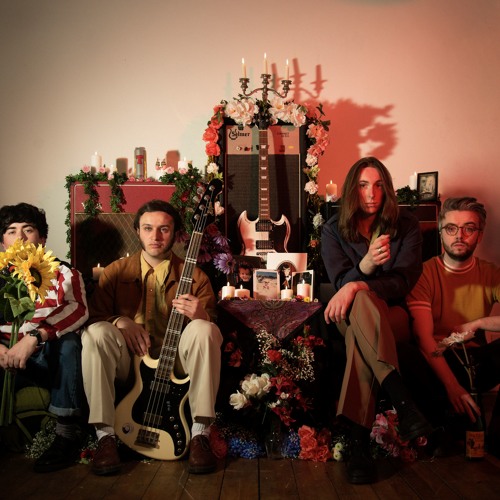 “I was brought up Catholic, and I don’t regret my upbringing at all, but there were some times doing normal teenager things where I remember thinking I’d literally go to hell. Looking back on it, I find it really hilarious. So a ‘Catholic Action’ is something I’d either do or not do.”

The adage the sun never sets on the British Empire is a remnant of aging colonial terror, but in Scottish summer, the sun really never sets. In McCrory’s studio space, though, the only light is artificial. He adorned the space with fake plants and sound panels made out of “rock wood” that he’d built with his father, a former woodworker. But only a few flights of stairs up, you can sit on the building’s rooftop and look out over the whole of the city and watch cars go by on the elevated highway McCrory describes as having “plowed” through Glasgow in the sixties. Growing up, his family did house swaps in Valencia and France, which often alienated him from his peers in Glasgow. “I had to watch a girl I liked start dating somebody else over MySpace statuses from an internet café in Spain,” he recalled, chuckling. But that itinerant lifestyle combined with learning to play the guitar at age ten and getting into recording at age fifteen prepared him for the world of touring as a band.

The first band he was in had a name that rivals Catholic Action for provocation: Casual Sex. “I was the baby of the group, since I was only twenty,” he said. In Glasgow, much of the art scene is made up of bored, entrepreneurial young people. “It’s constantly DIY and creative. Maybe it has something to do with the crossover from the art school,” McCrory described. Glasgow School of Art, the aforementioned art school, dominates much of Glasgow’s artistic world. But McCrory didn’t come from that ilk, and was always committed to a personally authentic sound that bother honored Scotland and rose beyond it.

“In Catholic Action, we always made a point of touring everywhere in Scotland,” he said. “Aberdeen, Perth, Inverness.” He paused to look out at the highway at the signs to Paisley, Renfrew, and Giffnock. Inverness, a small city in the Highlands, was miles and miles away. “Inverness was always either really good or really bad. But you get to a certain point as a band where people where you’re from know you but nobody else does. You need to get out of your hometown as quickly as you can.” And McCrory wasted no time. Before he even went international, Catholic Action took a ferry out to a punk festival in the Shetland Islands, surrounded by elderly Shetlanders tipsy on gin and beer in a town so small you could walk around it in a half-hour. 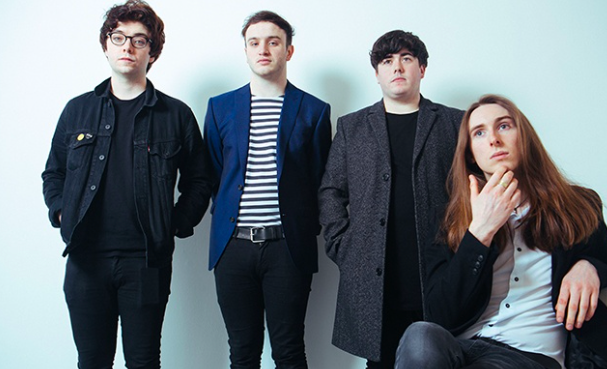 But his favorite tour memories are all in the United States. “I like playing in America, because there’s more respect for performance and guitar music. In the UK, the music scene is very indie and fashion-focused,” he said. He loved playing St. Paul, Minnesota in a dilapidated wooden venue that was falling apart, and remembered liking my home abode of Pittsburgh, despite that someone tried to carjack his drummer in the city’s grimy downtown. 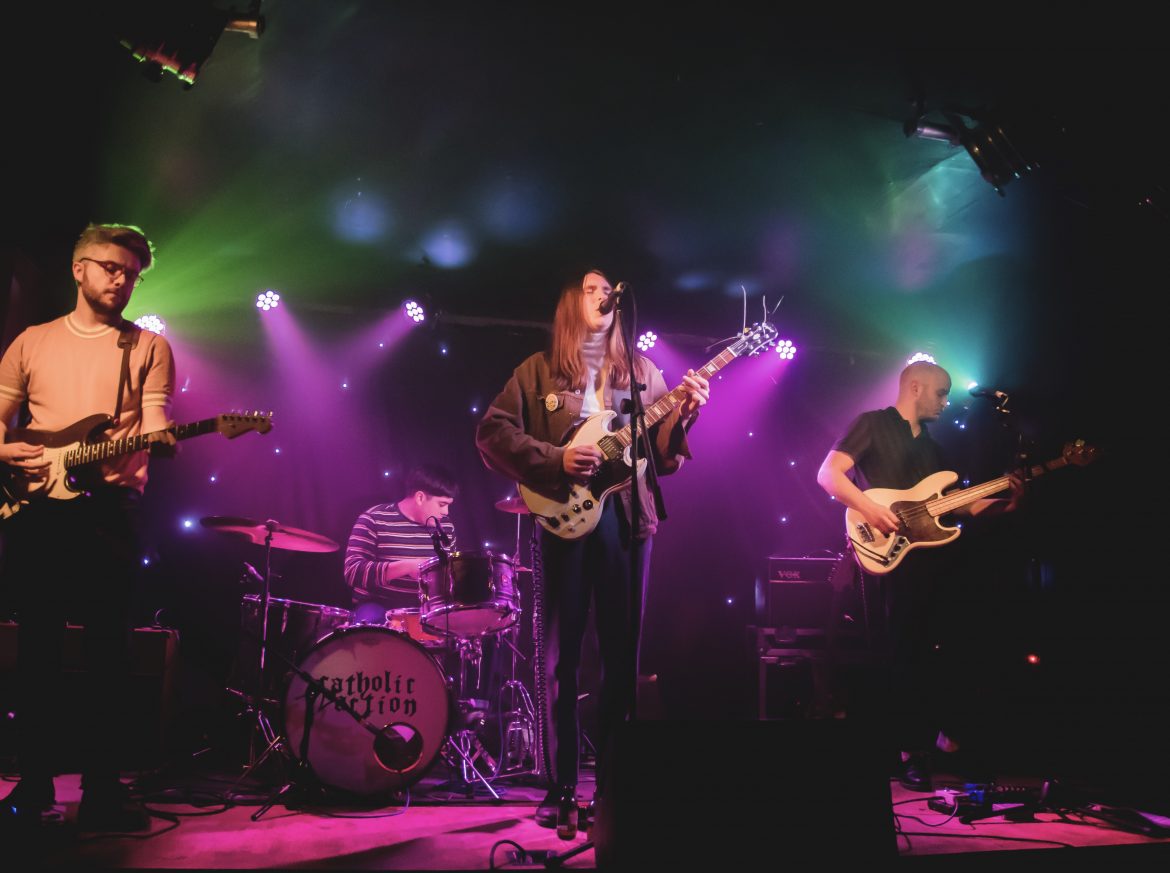 “I like playing in America, because there’s more respect for performance and guitar music. In the UK, the music scene is very indie and fashion-focused.”

I’ve got a theory that many people make the mistake of moving to places that expect them to already be complete, like New York and Los Angeles, in hope that the success and glamour will rub off on them and erase their damage. I grew up in New York and know the glitz most of my art school classmates searched for is a façade. I moved to the Rust Belt nearly a year ago, exhausted by an untenable existence in a city overcrowded by yuppies I couldn’t relate to. McCrory, like me, has an affinity for damaged places.

Like many musicians, the pandemic has slowed McCrory’s touring schedule. The last show he played in 2020 was opening for the Dead Kennedy’s in Philadelphia on a whim. He remembers the surreal feeling of the empty streets and the panic of booking last-minute flights to the United Kingdom before the borders closed. Though it’s been two years since he toured, in the meantime McCrory has expanded his clientele as a producer and has managed to balance authenticity with commercial success, a rare occurrence for an artist. “I don’t want to make any records I don’t believe in,” he said. “In this line of work, people can always tell when you don’t like what you’re putting out.” 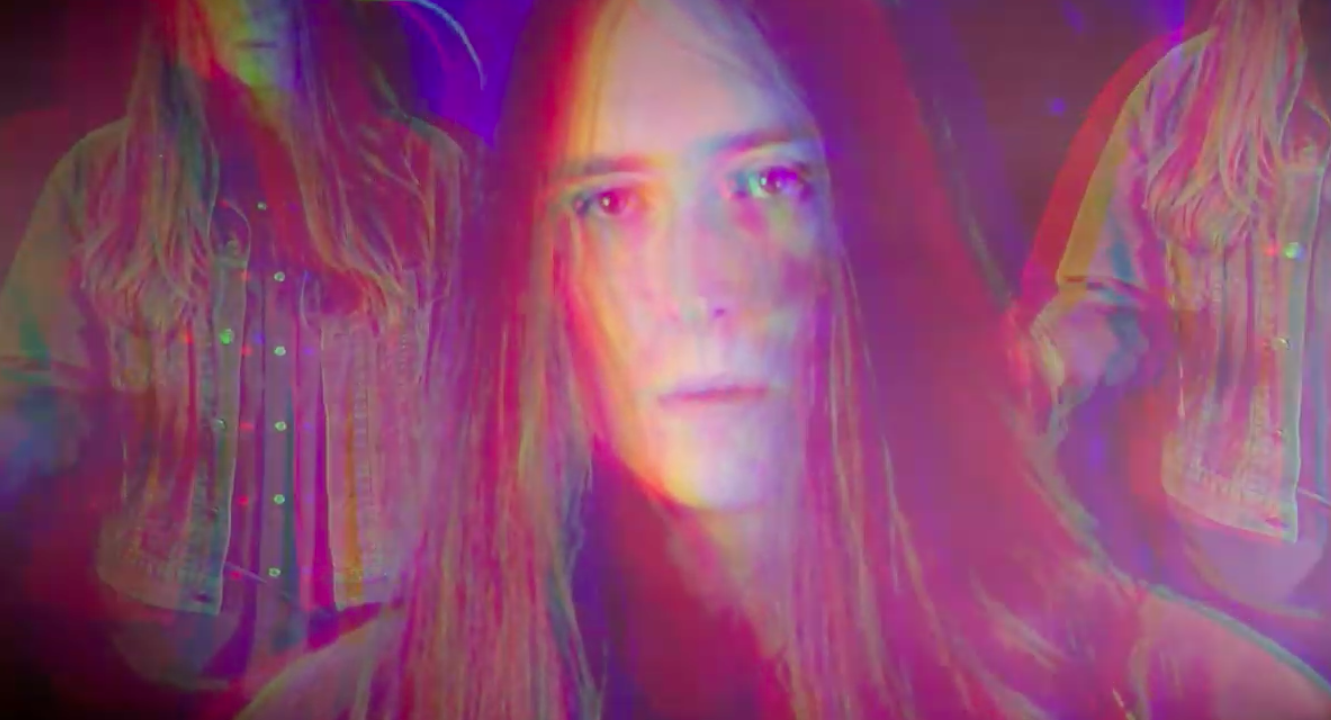 “I don’t want to make any records I don’t believe in. In this line of work, people can always tell when you don’t like what you’re putting out.”

In “People Don’t Protest Enough” off of Catholic Action’s most recent album Celebrated by Strangers McCrory wrote: “The rain falls on everyone at once / But people don’t protest enough. / The words spill on everyone at once, / But meaning won’t touch all of us.” The song has a uniquely Glaswegian feel to it. After spending almost a month in Scotland, I could well understand the sentiment that the rain falls on everyone there, but many operate in a sluggish, subdued sadness. But those that do think outside of the lines are open and down-to-earth in a way you don’t find anywhere else. Though the plants in McCrory’s studio were fake, there’s no doubt that the city he operates out of is fertile ground for creativity.

Emma Riva is a the managing editor of UP. She is the author of Night Shift in Tamaqua, an illustrated novel that follows a love story between 24-hour-diner waitress and a Postmates driver. As an art writer, she is particularly interested in working with international artists and exploring how visual art can both transcend cultural boundaries and highlight the complexities of individual identity. Emma is a graduate of The New School and a Wilbur and Niso Smith Author of Tomorrow. She lives in Pittsburgh, Pennsylvania.