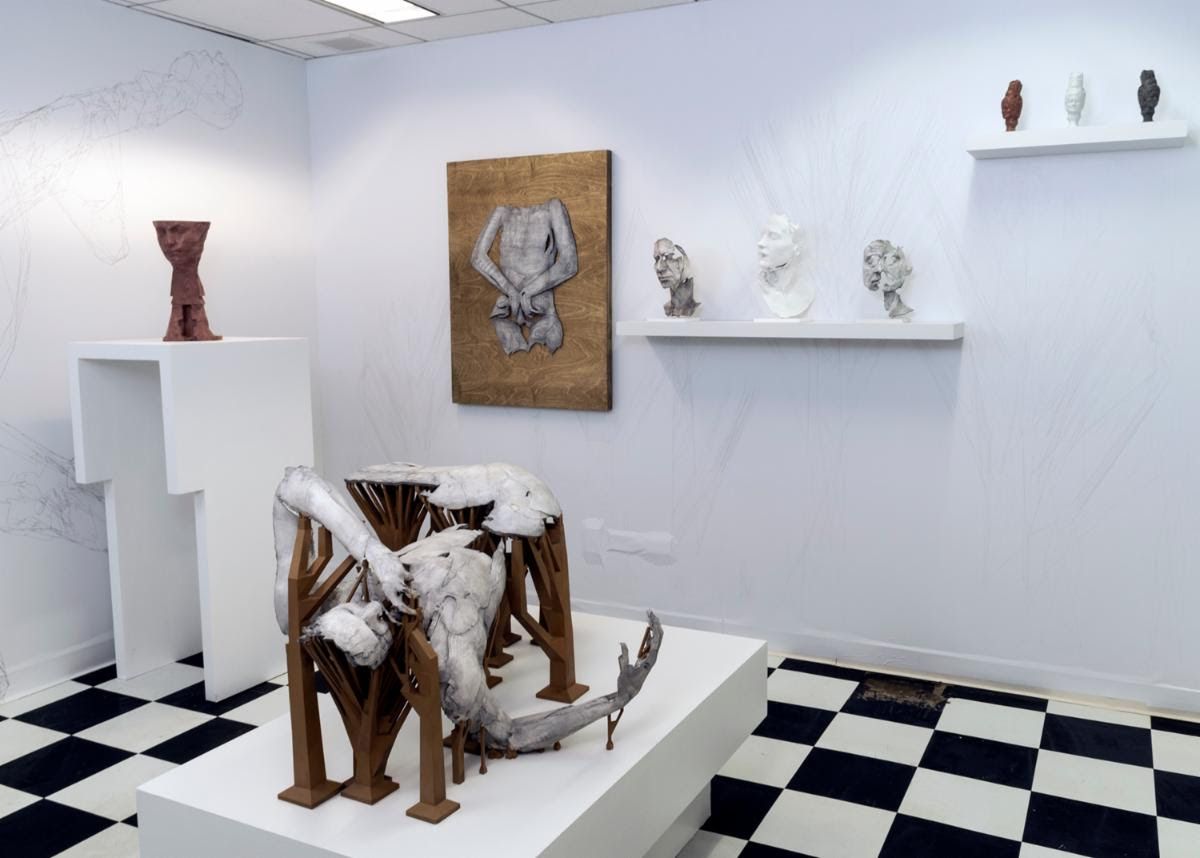 Chapel will be on view at Booth #1106 from September 8th – 13th. Due to COVID-19 protocols, advanced tickets for SPRING/BREAK Art Show are required for admission.

Heresy can be defined as a controversial, unorthodox, or mistaken belief, especially one based on unsound arguments. In medieval times heresy was a subversive offence against those in power, the Catholic Church in particular; today, the heretics are the ones in positions of authority. A new plague is tearing through the population. A new cult has formed with a charismatic leader and followers poised to mortify and sacrifice themselves for their new god. Conspiracy theories have become the new scripture — digital prophecies that foretell the punishment of the wicked and the rewards awaiting the true believers after the promised apocalypse.

CHAPEL, featuring sculpture, works on paper, printed wallpaper, and NFTs by Sophie Kahn and Colette Robbins and curated by M. Charlene Stevens, is a physical and digital devotional space for the exploration of ancient mysteries, practices of corporal mortification, and the contemplation of death.

The difference between a cult and a religion is the number of followers and acceptance into society’s mainstream. CHAPEL is a play on scale. The private chapel is a microcosm of the cathedral, eschewing large-group worship in favor of family or private devotion. The wallpaper represents a bugs-eye POV of the sculptures, a physical manifestation of a digital simulation inside of the works. The supports from Sophie Kahn’s Machines For Suffering become a forest of vectors, suggesting the flying buttresses of a Gothic cathedral. Colette Robbins’ wallpaper presents an imposing Rorschach-pelvic form of The Artist and Forer Effect, subverting the gaze from Courbet’s Origin of the World.

Sophie Kahn’s life-sized sculptures and bas-reliefs depict their subjects writhing in sacred hysteria or heretical ecstasy. The sculptures are digitally mortified and fragmented, their negative space suggesting omissions and blind spots in the design of the industrial imaging technology used to create them.

Colette Robbins’ sculpture offers a frame for investigating the origins of conspiracy theories and cult worship. Robbins uses remixed ancient symbols, archaic smiles, and augmented Greco-Roman heads. This eclectic imagery—influenced by her extensive online archive—references occultism, archaic cults, neuroscience, and psychology. The downloaded archives are organized into stylistic prompts for her assemblage-like approach to digital sculpting. As she collages, shapes, builds, and deletes fragments, she keeps a critical eye on the narratives that have shaped western civilization—including an awareness of those voices which have historically been erased. These chimeric idols merge arcane imagery with digital materials and practices, linking ancient heresies with contemporary conspiracies.