This is Part Three of a series on Denver, CO street art. Read Part One here and Part Two here.

Denver native Chris Haven’s father owned an auto body shop right next to Joe’s Liquor Store in Five Points, and now Haven’s graffiti tag greets customers at Joe’s when they come in. “These days, you can paint almost anywhere in RiNo,” Haven said, using the more contemporary name for the neighborhood, now designated as an art district. “Art is pretty accepted in Denver now, there’s art walks and things like that.” Growing up in Denver, Haven has seen how Colorado’s early legalization of marijuana dramatically altered the entire state’s economy, turning the neighborhood where his father did auto work into a trendy epicenter for craft beer and art walks.

Haven, who grew up skateboarding and making hip-hop beats, studied art and was always fascinated by classical artists like Salvador Dali and Pablo Picasso. His path to graffiti came from his lifelong affinity for skating—“When I started, it was just tagging, we were skateboarders and all my friends would carry markers with them.” He only started doing murals within the last ten years, but found it to be a meaningful way to give back to the community he grew up in and spread a message of positivity. 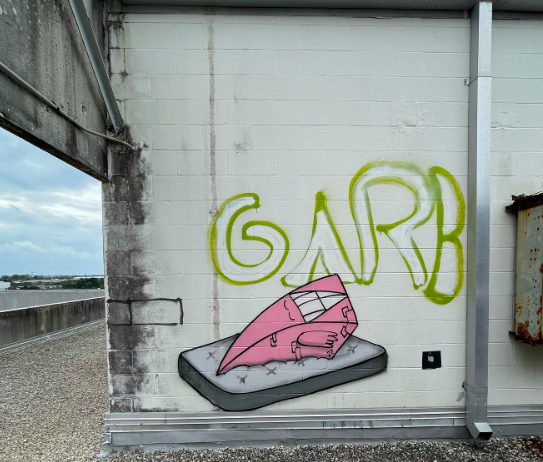 When I spoke to Haven over a video call, he was in the midst of doing a mural in Miami and answered my questions in-between whooshes of spray-paint. He has a mellow demeanor that comes through in the smiles on the faces of the triangle that’s his signature tag. Like Casey Kawaguchi, Haven’s art is instantly recognizable because of his visually striking re-occurring character. “Not many people had a symbol for a crew,” he recalled of the origins of the triangular figure. “It became something one-of-a-kind.” They had put it together but all painting triangles and stacking them on top of each other to create a more three-dimensional shape. But it ran deeper than just a symbol for his crew. 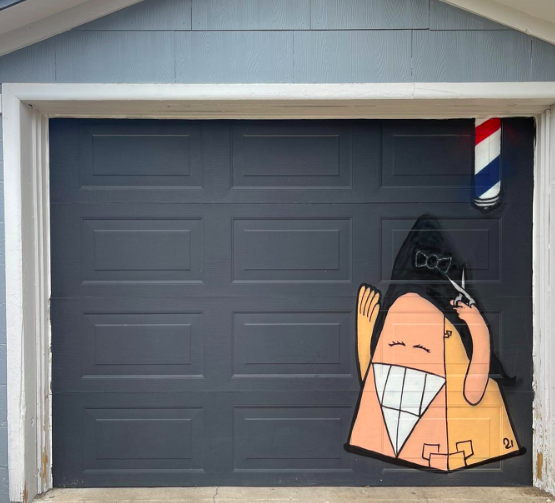 “At the time, a lot of rappers like KRS-1, Rakim, and Gang Star were really into meditation, metaphysics, positivity, that kind of thing,” Haven said. “And there was a big push from the industry for them to act more stereotypical, and it got them ostracized from the industry.”

“At the time, a lot of rappers like KRS-1, Rakim, and Gang Star were really into meditation, metaphysics, positivity, that kind of thing,” Haven said. “And there was a big push from the industry for them to act more stereotypical, and it got them ostracized from the industry.” That emphasis on positive thinking in a world that feels against you resonated with Haven and his friends, and that was how they settled on their logo of the tetrahedron, a symbol for fire and metaphysics. The tetrahedron, in technical terms, is a polyhedron composed of four triangular faces, but if you’re like me and had to take remedial math, the simplest explanation for it is a triangular pyramid. However, Haven’s tetrahedrons brim with life, a far cry from stagnant geometric diagrams on a piece of paper. 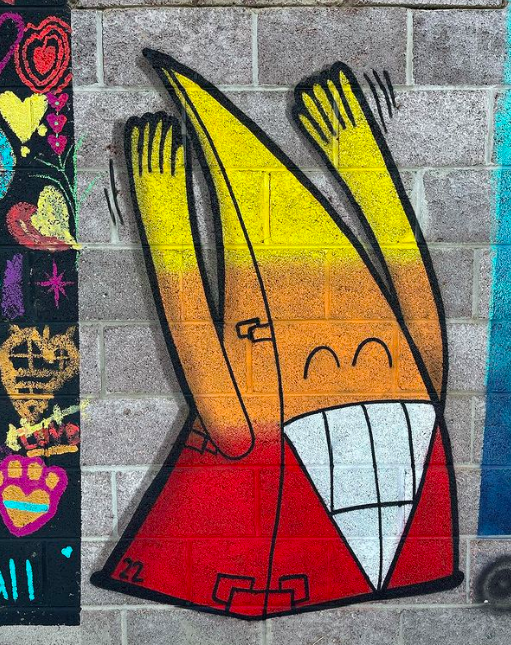 One of the tetrahedron’s most noticeable features is its grin. Its smile is another upside down triangle, stylized as a toothy expression of whimsy. The tetrahedron’s simplest form is greyscale, but Haven has created version of it in red, blue, yellow, and green. Some are multicolored with stripes or gradients, but no matter what color they are, they radiate positivity and happiness. They exemplify the message Haven told me, that it’s cool to be healthy, happy, and kind, even in a social culture that doesn’t value those things.

Haven makes sure his art is visible in the local Denver community and even worked with the city of Denver for to do cityscapes, his other trademark. “One day I was just doodling a bunch of lines, and it turned into a city,” he said. “It became something way more intricate. I pitched that design to a business and now it’s one of the signature things I do.” He’s painted electrical boxes, the front of a Bubba Gump, murals inside company rooms for Denver startup week, and a wide variety of other local Denver spaces. A mural of his even greeted me at Shake Shack alongside Blucifer when I came into Denver at this infamous airport.

Haven (and every artist I met in Denver) was unequivocal about one thing: He’s ride or die for Denver.

In between the bursts of spray paint on the Miami wall, Haven and I got to talking about the ways Denver has changed since his childhood. “The influx of the legalization of weed brought in so much money,” he reflected. “Way more revenue. People started buying up apartments, land, everything. Everybody was coming into Colorado just to smoke.” As this was my first time in Colorado, I had admittedly never given much thought to just how much marijuana came to define the state’s economy. “It’s all weed and beer now,” Haven said. “And ski-ing.” But that hasn’t stopped Haven from being able to make it in his hometown. Having lived in my hometown of New York for a portion of my adult life, I can well empathize with the feeling of watching it change around you and feeling a strange ambivalence and nostalgia mixed with deep loyalty for the place you love. Haven (and every artist I met in Denver) was unequivocal about one thing: He’s ride or die for Denver.

ateboarding. “I ride for a local skate shop and travel with them.” In conversation with Haven, he has the ethos of a skater, warm and laid-back but undoubtedly skilled at his craft. “I’m not always as active in skating as some of the younger people, but I get up,” he said. “And I help out at the shop.” Besides, skating and graffiti go hand in hand, both the pastimes of kids who felt like outcasts and needed outlets that are now trendy and marketable. Haven’s home base for skating these days is Arvada Skatepark on the outskirts of Denver, which ironically Google Maps describes as a “haven for skaters.” 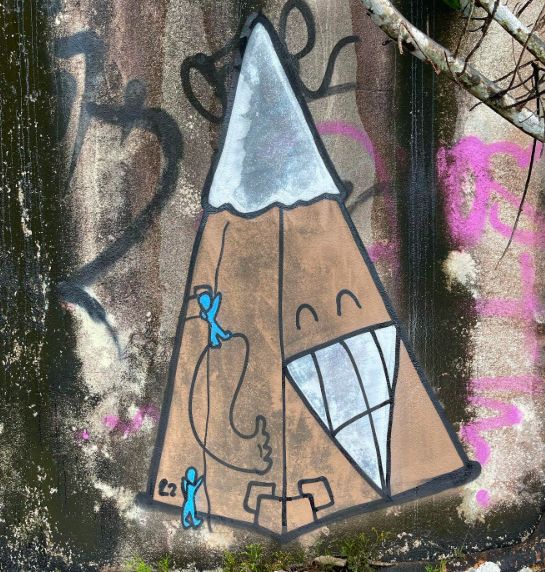 “When I do shows, I want to do shows that feel right,” Haven said. “Not a lot of galleries show street art here. ILA is one of the first.”

I came into Denver on the tail end of a skate deck show at ILA Gallery, where Haven has shown much of his work. One of the sharpest turns in Haven’s career in recent months has been creating NFTs and implementing augmented reality into his work, but that doesn’t mean he’s abandoned the physical space his work occupies. At his April 2 show at ILA, Nothing to See, Haven gave abandoned secondhand canvases new life through augmented reality. When viewers scanned the images, Haven’s artwork popped up out of the existing piece. “When I do shows, I want to do shows that feel right,” Haven said. “Not a lot of galleries show street art here. ILA is one of the first.” 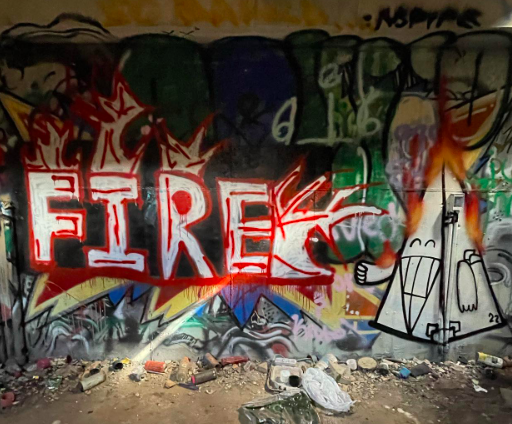 “I always try to collab in a positive way and not ruin what I see, only add more to it.”

Nothing exemplifies the community-oriented spirit of Haven’s art more than his “forced collabs,” where he finds random tags or murals by chance and creates a scene for his pyramid character to interact with them. He wrote on Instagram in a caption for one: “I always try to collab in a positive way and not ruin what I see, only add more to it.” In a world saturated by irony and cynicism, Chris Haven makes kindness and positivity cool. Being earnest and genuine is incredibly difficult when everyone around you is layered in sarcasm and disdain. It’s something that I’ve always struggled with, particularly in the art world, that somehow I won’t be able to hide my belief in the goodness of other people and the importance of health and self-confidence underneath the layer of cool that seems to sheath everyone else. But in Denver, Chris Haven’s tetrahedrons smiled at me from the walls of RiNo, and I couldn’t help smiling back.

Chris Haven’s work is available in his store and as NFTs on his OpenSea. His music can also be found on Apple Music.