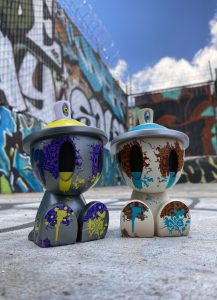 Check out the Kickstarter here!

Clutter Magazine has become an institution within the close-knit indie toy community, over the past 17 years, with their dogged commitment and passion to the scene. Clutter’s gallery presents monthly shows that span the breadth of toys across the industry and host internationally renowned artists. The organization also presents crucial events like Five Points Fest and the Designer Toy Awards. Most ambitiously, though, Clutter participates in the community they’re committed to, developing their own innovative releases that advance the culture and encouraging designers to take the leap and push their talents one step further.

Kimberg called the Canbot “the next big universal platform,” due to its versatile shape, which lends itself to interpretation and a wide range of creative expressions. “It exhibits all the necessary traits that a platform needs to have to be successful: accessible, clear, clean, and it makes everyone’s art look great.” 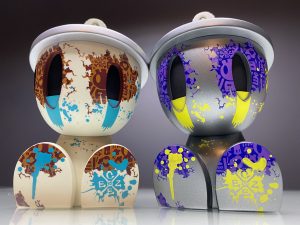 The Canbot is a cuddly creature, considering it essentially animates a discarded object. Its head features succinct details that show the art materials it’s inspired by. The head lolls contentedly over a compact body with subtle arms and cartoonishly large feet. Czee13 devised the Canbot’s shape upon contemplating all those spray cans he’d thrown away after draining their contents for creation. “That’s why, in the original series, many of the final Canbots are shown crying,” Kimberg noted. They are teary-eyed over their unavoidable demise. “The roots of the Canbot are deeply embedded in the artistic process,” Kimberg continued. “That sentiment of the artistic project is what makes the platform resonate with so many well-established, internationally renowned artists.”

“The roots of the Canbot are deeply embedded in the artistic process,” Kimberg continued. “That sentiment of the artistic project is what makes the platform resonate with so many well-established, internationally renowned artists.”

Clutter’s commitment to close, organic relationships with key players proves their strongest suit. Regarding the partnership they’ve found with Czee, Kimberg stated, “he’s my best friend, but we’re also amazing collaborators with each other, and Miranda.” Together, the three of them had already been making the larger 5oz Canbots for the past six months. They originally intended to release this new, more miniature version as an exclusive drop for Five Points Fest 2020, which was unfortunately canceled due to the COVID-19 pandemic. Resilient against the sudden turn of events, the trio found a way to make their splash digitally. 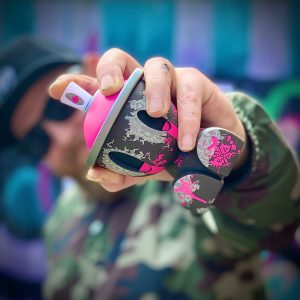 Kimberg told me that the team decided to use Kickstarter “as a means of marketing and communication throughout the industry.” He sees the ubiquitous platform as a venue that can connect would-be fans with the exciting new release. Fans obviously agreed — Kimberg and O’Brien watched their project get funded within four minutes of launching. “We were sitting here screaming like we were watching a slot machine,” Kimberg recalled with a chuckle. “The numbers ticked up in real-time.”

When we spoke on August 19th, their project was 715% funded. Grateful, humble, and always ready to deliver more, Clutter announced that if the project reaches the 1000% funded milestone, Czee13 himself will hand-paint 30 Canbots to be randomly distributed into lucky orders.

This exciting addition builds upon some pre-existing suspense. Many of the Canbots are being offered blind box style. For the uninitiated, blind box purchases arrive on your doorstep in an opaque box in a black bag. Customers enjoy the surprise element of opening their blind box to discover which iteration is inside. Blind box offerings are available on the Kickstarter at the discounted rate of $10. Also available in the Kickstarter are a number of 5oz Mega Canbots and the new Spray Mech, all of which are not blind boxed. 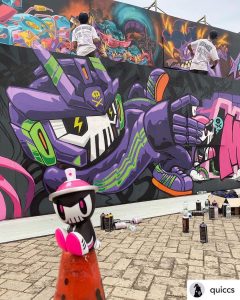 There’s still even more excitement to be had in the lead up to this launch. To honor the occasion, Clutter is hosting a design competition, which is accepting submissions through August 24th. Participants can submit their art to be featured on the Canbot template. Enthusiasts around the world will vote August 25th through September 2nd to determine the top ten contenders. From there, Clutter’s esteemed panel of industry experts will select the winner, who will be featured amongst the 15 existing, established artists whose work is already up for grabs.

So far, they have over 350 hopeful entrants. Kimberg said that the submissions are “more amazing than we even imagined they’d be,” and that they thwart the tropes one might come to expect. 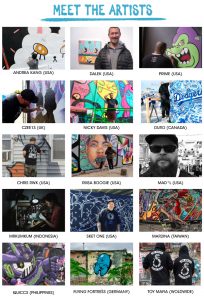 Kimberg concluded that Kickstarter has proven an extremely fulfilling manner with which to generate buzz about their latest project. “We’re really excited about the feedback and the energy we’ve gotten from the industry,” Kimberg beamed, noting that the excitement has “lent a certain velocity to the project.” He continued, “This has given us an opportunity to create excitement, buzz and love.” To get in on this amazing opportunity while it’s still available, be sure to check out the Kickstarter while it’s available, until September 4th or sellout. At this rate, the latter option will probably come first.

Check out the Kickstarter here!

Vittoria Benzine is a street art journalist and personal essayist based in Brooklyn, New York. Her affinity for counterculture and questioning has introduced her to exceptional artists and morally ambiguous characters alike. She values writing as a method of processing the world’s complexity. Send love letters to her via: