It was a brisk Sunday morning when my boyfriend and I made our way downtown to see Coby Kennedy’s second solo exhibition with forever-hip Superchief Gallery NY, Jimmy Crow and the Imaginary Thug, on view through March 21, 2021. I arrived a few minutes before the gallerists could let us in, and while waiting I was able to take in, for me, the first aspect of the show. Its location. 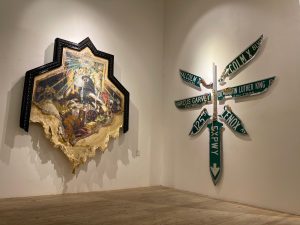 The gallery is situated on what was on a bustling busy street, near chic stores, random pop-up shows, delicious food…basically a ‘happenin’ place to be. The gallery is still a ‘happenin’ place to go, but the effects of the COVID-19 pandemic on our economy feels more striking here than anywhere else in the city. What used to be a day for brunches and exploring, now feels beyond subdued. Every day more windows are bordered, more stores going out of business. The city feels like it is in a state of slow deflation. Our current reality, or at least my reality, is starting to reflect more of the dystopian societies one might see in late-night sci-fi film.

With that being said, it was refreshing, in fact fucking NEEDED, to see work that reflects this feeling of almost complete despair. Of anger. Of consequences. Kennedy’s works are in your face, aspects relating to our current reality and past, transformed into the nightmarish dreams. Confrontational. Responsive. Consequential. Past, present, and future myth all at the same time.

With that being said, it was refreshing, in fact fucking NEEDED, to see work that reflects this feeling of almost complete despair. Of anger. Of consequences. 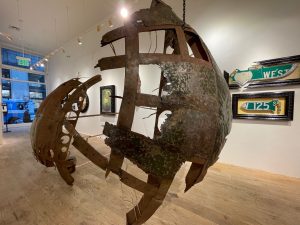 When I first walked into the gallery, I immediately sensed a dystopian energy from the works just by how they look physically: a giant rusted metal structure hanging, street signs reconfigured into weapons. However, it was only after my discussion with Kennedy that day did I fully appreciate the intricate and layered histories that Kennedy was remolding and playing with, resulting in works that reflect a darker understanding of history, ourselves, and potential future(s). It was soon after my own arrival, a tall, muscular man strode confidently into the gallery and said hello, where I then introduced myself and our verbal journey began.

I’m not even sure exactly how it started, but we soon we were chattering about our love of everything history related, and preference for movies that are at least three hours long. We were excitedly jumping from one historical topic to other. I knew this was a man cut from a similar cloth to my own when I suggested one of my favorite documentaries, the epic 24-hour 1998 CNN documentary, Cold War, and he actually wrote it down to look up later.

I’m not even sure exactly how it started, but we soon we were chattering about our love of everything history related, and preference for movies that are at least three hours long. 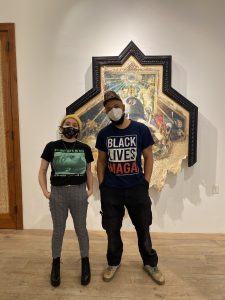 Thankfully we both seemed adept at conversing in the wonderful circular and broad language of history, and we were able to continue throughout my visit, as well as touch on the present history at hand: his current exhibition. Walking through Jimmy Crow and the Imaginary Thug, with Kennedy leading the way, I came to fully appreciate the layers of each of his works to illustrate his parallel world with details pulled from his memories, experiences, and the present and historical trauma that continues to negatively affect the black community and individual.

When you first walk into the gallery space, you are confronted with a huge, majestic painting of a horned creature. The creature is framed elegantly into a cross-like shape, its featureless face staring directly at the viewer. Portrait of James Crow As [S]He Appeared To Coby Kennedy On The Field Of Armageddon, 2019, has an ominous presence, even though it was something I had never seen before. 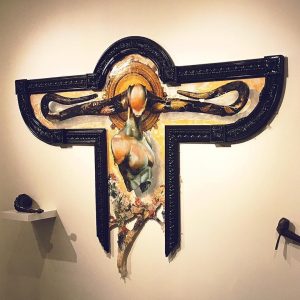 Kennedy’s non-binary creatures instantly reminded me of Pan’s Labyrinth’s creepy human-esque monster, the Pale Man, that delights in eating children, which for the director of the film was a “creature as symbolic of both the Catholic Church during that era in Spain and of greedy, rich white men in general.”

The first connection, while completely not on mark, was on the correct path. His horned creatures are called Jimmy Crow, their name purposely taken for its negative historical connotation and are “a spirit of vengeance…a force of reciprocity through destruction, and salvation through mythology.” 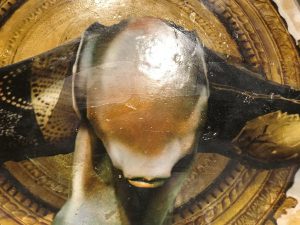 What was most interesting about the Jimmy Crow creatures was not their human quality but their unhuman elements. In the press release, the Jimmy Crow creatures are explained as being a “physical manifestation of this frustrating existence,” similar to the Jewish folklore creature golum, a creature that was manifested as a last defense. Kennedy explained that Jimmy Crow creatures become less human, more monstrous, more full of vengeance, the longer they are in racist society. In our reality, Jim Crow was never a real person, but the name came to represent another word for slavery, a new system of economic and social oppression on America’s black society. However, Kennedy has taken that name back, destroyed its origins, to become a creature that stands in complete opposition to the origins of its name. Jim Crow was a fictional creation by white society of a docile, servile black person, used to represent racist laws. Jimmy Crow is the Jim Crow freed from society chains, no longer human with sharp horns growing, ready to enact overdue revenge.

However, Kennedy has taken that name back, destroyed its origins, to become a creature that stands in complete opposition to the origins of its name.

Kennedy takes words created to lesser another and produce fear and takes them back only to throw them at your head at full force. It’s the old tale you always hear, when someone is repeatedly told they are ‘other,’ ‘wrong,’ ‘bad,’ ‘thug,’ they finally snap and go, ‘OH YOU THINK I’M BAD? I’LL SHOW YOU BAD.’ 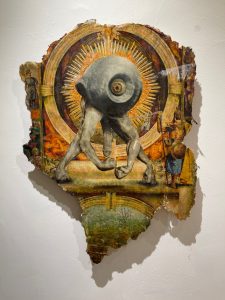 It’s like the final battle call when all else is lost. No longer to destroy only your enemy, but ultimately your entire reality. That to me was what Kennedy’s other fantastical creature creation, the large, and very well-endowed, but ballless, Thuggernaut, represents.  The Thuggernaut is created by white society to destroy the black community within, “a weaponized biological slur created by manipulating stolen fetuses from the black community, gestating them into huge metal pachydermic shell…they are set loose to roam the urban landscape dishing out death, self-genocide and general sociopathic behavior designed to destroy black society from within.”

For decades now, the word “thug” has come to represent bad, illegal, and dangerous, and, as the Press release states, it is “often used as a catch-all term for Black youths in the minds of privileged white America.” So often is this term used on Black youths that it destroys their potential future, even whole communities’ futures by predetermining their worth and abilities as a lost cause. This negative labeling is a way of destroying oneself, a way of stopping a person from even trying to succeed.

Kennedy’s Thuggernauts, ghastly and mechanic, a blending of horror fantasy with technology, visually illustrate this self-destruction. The technological aspects were most apparent when examining the cast-off “skins” of the Thuggernauts. One skin is connected to still be “living cell” so we can see how they function, powered by Colt 45s, English Ale, Newport 100s; items that are seen frequently together in low-income areas, items with their own unique history. 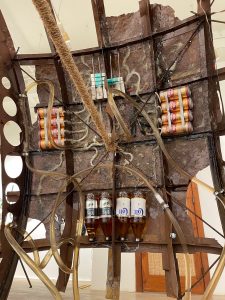 When I say Kennedy’s works are confrontational, he is taking all the parts of the racist mass media focused society we live in, have lived in for decades, and manifests for us the creatures “we create” in a sense. It’s the consequences of the way we are living taken to its final extreme form. Kennedy imagined it as “The Kingdom of Brooklyn,” a place where a “culture, raised solely on today’s highly problematic mass media, would inevitably build their society in the future.”

When I say Kennedy’s works are confrontational, he is taking all the parts of the racist mass media focused society we live in, have lived in for decades, and manifests for us the creatures “we create” in a sense. 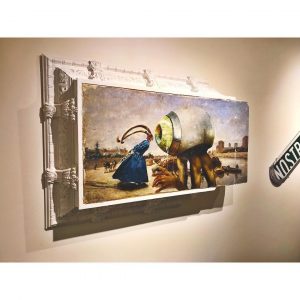 Both works are made from street signs named after historically famous black men, Martin Luther King Ave and Malcom X Boulevard for example, which Kennedy has made into deadly machetes. There are many layers to unpack in these two pieces, but I will focus on two details that stand out. 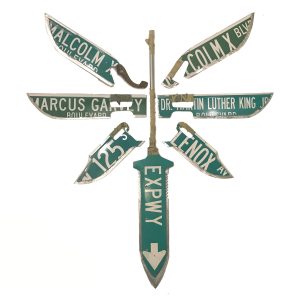 While at first you may think the connection is to the famous Chris Rock joke about Martin Luther King Blvd, it is instead a deeper reading as to why these streets have this reputation as “dangerous.” While Chris Rock reflects in his joke how Martin Luther King Blvd is not a safe street, Kennedy instead focuses on how white society, to placate black society, not in any way meaningful like a new recreation center or park or even some kind of new political legislation, instead changes a street name. A symbol of empty token recognition.

Kennedy instead focuses on how white society, to placate black society, not in any way meaningful like a new recreation center or park or even some kind of new political legislation, instead changes a street name. A symbol of empty token recognition. 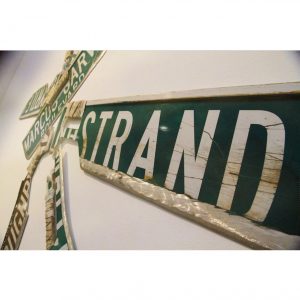 Kennedy takes this empty symbolic object of recognition by white society and turns it into a machete that can be used to fight back. And the machete is no empty symbolic symbol. Throughout colonization in Africa and the Americas, the machete became a favored tool on plantations, especially for sugar cane and bananas. It also became a favored tool for colonial punishment, execution, and, more recently, genocide.  It is a ghastly reminder of slavery, labor, brutal subjection, and terror.

When examining Kennedy’s street sign machetes, even when depicted in his various paintings, the grips and handles of each one are wrapped with torn t-shirts from the pioneering hardcore punk band Bad Brains. It is in small details like this that the poeticism of Kennedy’s awareness of his materials is apparent. The final detail that emphasized this hyper-awareness was, I have to admit, something my boyfriend noticed and first asked Kennedy about: the wooden handle on Malcolm X Blvd on Borough Nationalist Mandala 1. When asked, Kennedy reflected on how the high-class black society during the Harlem Renaissance could be found on New York’s Malcolm X Blvd. The fine carved wood handle, taken from some elegant piece of early 20th century furniture, now used as a handle for weapon, encapsulates the history of Malcom X Blvd, from the glory of the Harlem Renaissance to a potential battleground.

As someone obsessed with history and details, finding the connections, trying to understand “how in the world did we get here?” and “where are we going?” while also keeping a sense of imagination, Kennedy’s work delivered.

His work is unapologetic. It is not meant to make you comfortable with the reality he provides, or the reality we are living in. It is meant to provoke. Provoke not just actions but words of discussion. We must do more. We must understand more. History is narrative that has many chapters and more lessons than people care to admit. Kennedy reminds us to not only know your history so that you can survive, but to understand it in all of its positives and negatives. It is not a burden chained to our ankle, but a weapon that can be used for absolute destruction, and hopefully salvation.

Coby is one of 16 Brooklyn-based visual artists being featured in the new “Flowstate” docuseries by All Arts/PBS & Cyprian Films, chronicling their work during the COVID19 pandemic & lockdown: https://allarts.org/2021/02/flowstate-north-brooklyn-artists. Now available to stream online.