A Citizen of Outer Space -- CTDZN the Alien

Landing in Portland in 2016, this extraterrestrial street artist is now considered a staple of the PDX street art community. CTDZN, pronounced ‘citizen,’ their work relays a message from the unknown, with an often-lime green alien face and other adaptations of a similar image spread across the city. In 2016, CTDZN was a student at the Art Institute of Portland, but while attending they had a hard time discovering their personalized style. They remembered, “Looking around, I noticed the high agency design wasn’t fitting for me.” One day, a buddy of theirs handed them a stack of 228 shipping labels, and that’s where it began. After doodling random drawings and fun puns, CTDZN stuck them up around town and the rest was history. 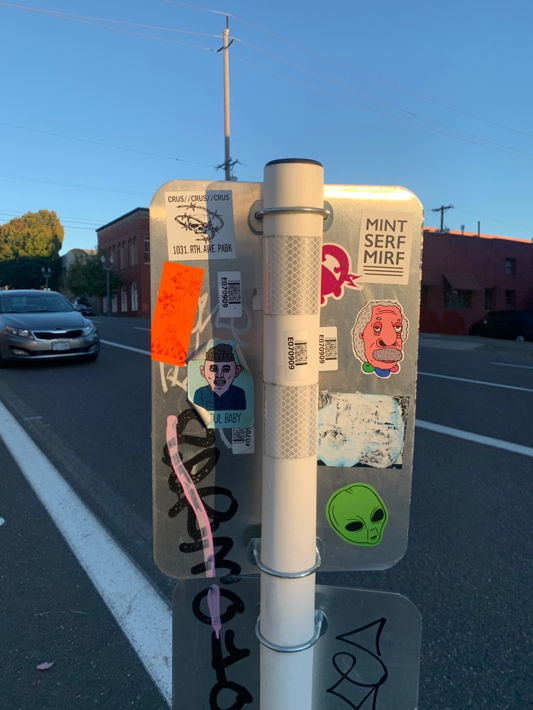 These blank canvases provided CTDZN the agency to do whatever they wanted. Shipping labels are free from USPS, so their versatility is endless for street artists. You can cut them into the shape you want, and their stability allows for varying mediums. Street art is known for adaptation and using resources provided by the community – anything can be a canvas to a street artist. This can be an aspect that draws artists who find their work breaking the rules and regulations of the high art world.

The name CTDZN started as a random jumble of letters, however, after one meeting with another street artist the Citizen name was established. Since CTDZN was new to the scene, they didn’t quite understand the whole anonymity piece. “I didn’t call myself that; people just started calling me Citizen.” The name stuck, and, figuring that the mysteriousness of the name added to the fun of it all, they decided to go with it. CTDZN stickers don’t have an identifying moniker on them; this lack of instagramable identification creates an extra layer of discovery to the whole CTDZN experience. There is an identifiable familiarity with the shape and clean lines of the CTDZN Alien that makes it easy to spot, and, once you’ve found one, you’ll see them everywhere. 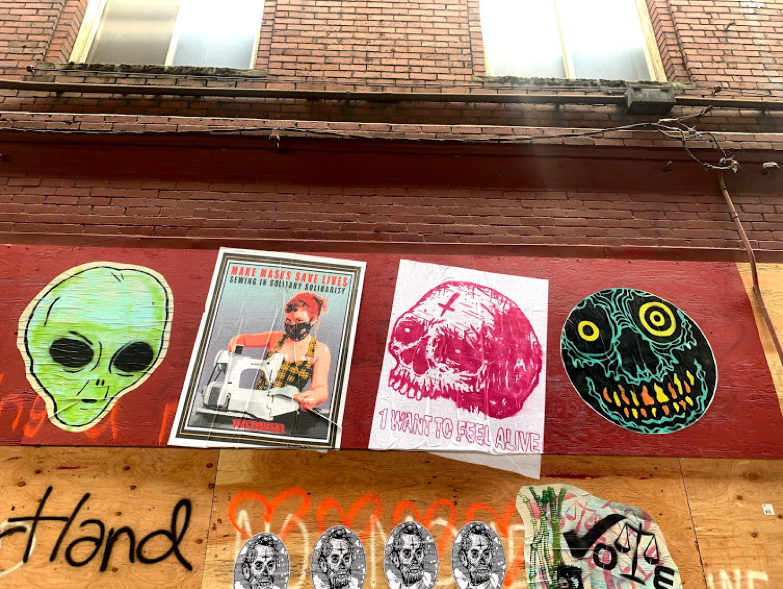 As many of us known, a huge part of the street art community is that first moment when you realize that you’re spotting artists, picking up on the patterns, and finding yourself slipping into the spaces that lie in between the cracks, the ones taggers tend to bomb. These introductory moments are often followed by the discovery phase where you learn about the culture, the dialogue, the history, and, then, the Instagrams. I noticed CTDZN getting up in Southeast Portland in the fall of 2016 when I looked up at a yellow sign covered in sun-faded paper stickers peeling from the recent rain. Right there at the bottom was this little neon green alien with pink highlighter eyes and one word underneath: High. It made me laugh aloud as I drew my phone from my back pocket to snap a picture and then continue on my walk. I later found out it was one of the first of many CTDZN aliens to have posted up around the city.

“I’ve always kinda been a stoner kid; it was a funny way to say, ‘I’m stoned all the time,’ but at the same time, ‘Hi’ to the street art community.”

“I’ve always kinda been a stoner kid; it was a funny way to say, ‘I’m stoned all the time,’ but at the same time, ‘Hi’ to the street art community.” Similar to the CTDZN name, the image just stuck around. “It was a silly little thing,” CTDZN chuckled. After hand reproducing the alien on those trusty 228s, individually cutting them out, and sticking them up around the city, CTDZN had a vision of a larger production. The 228s were simply not sustainable enough. Hitting the wall on creating each piece individually, it was time to move onto the world of screen printing stickers. Since it rains a lot in the pacific northwest, many artists turn to screen printing their stickers on vinyl which works as a semi-weatherproofer for their work. This big step allowed for a significant boost in CTDZN’s production and value. 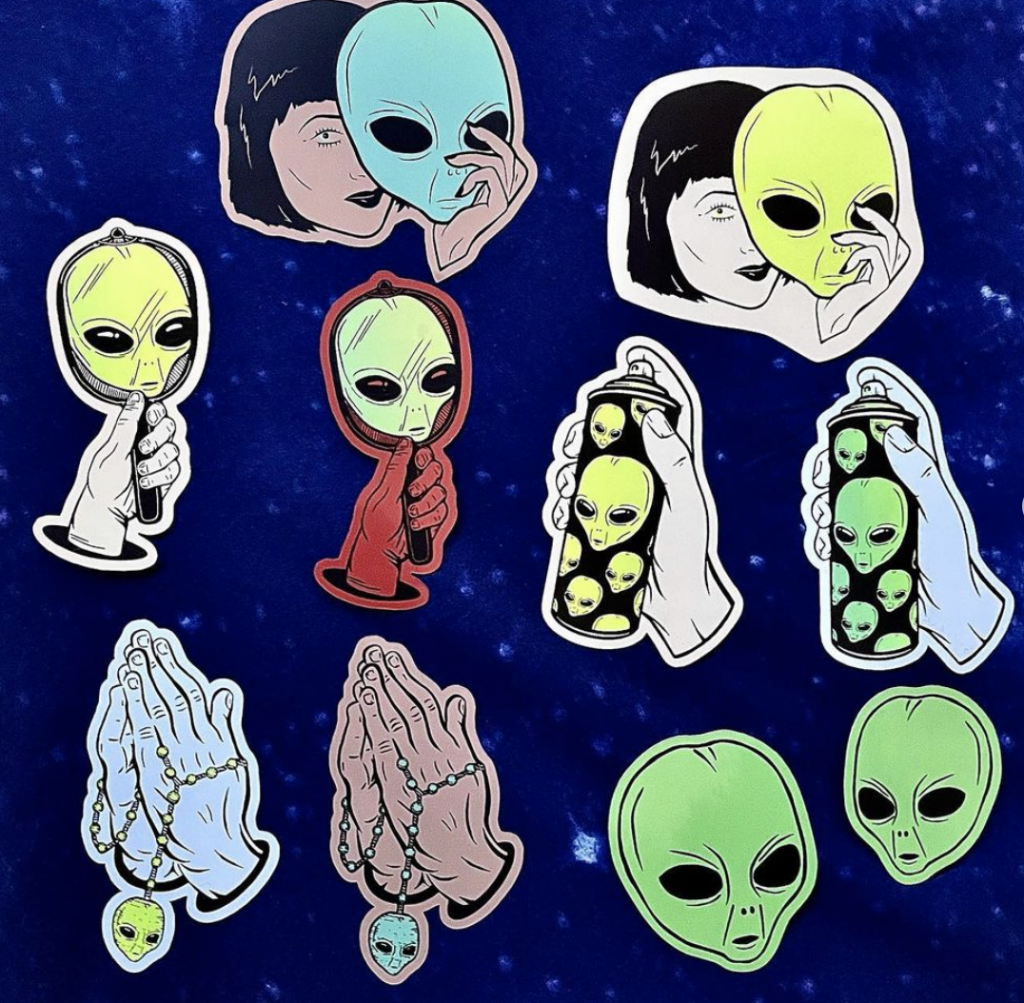 The CTDZN alien idea stems from a feeling of being an outsider – a feeling a lot of artists identify with. “I always kinda felt like an alien; that feeling of not quite sticking to the status quo. I don’t feel like I have always fit in with society or what is considered normal standard society if you will,” CTDZN described. As this alien has grown and evolved alongside CTDZN, they’ve noticed that this idea speaks to other people. There are a lot of people who feel like aliens in their way. “That’s one of my favorite parts about it all,” CTDZN said. There are many variations of this alien including one called the Hooded Alien which depicts the original alien with a wiser touch. This alien wears a hooded garment, holds something in its hands, and has a banner beneath it displaying a quote of wisdom or lore. Having evolved, the Hooded Alien has become CTDZN’s favorite incarnation.

“I always kinda felt like an alien; that feeling of not quite sticking to the status quo. I don’t feel like I have always fit in with society or what is considered normal standard society if you will,” CTDZN described.

While CTDZN is known for bright green, silver, and gold alien stickers, their medium of choice has changed many times. Explaining this as an “ebb and flow” some mediums are more interesting at different times, allowing for a huge variety of aliens in many shapes, sizes, and textures. After going hard on wheatpasting for a while, they’ll shift to something else. Right now, CTDZN has been focusing on stenciling and expanding on the use of spray paint, saying, “I feel like it has picked up with me pretty well so I think I will stick with it for a while.” To describe the work in their own eyes, “I’ve got it dialed in at the moment with my different mediums such as vinyl or stencils. Every once in a while, I’ll print or spray paint posters.” This evolutionary change allows CTDZN to expand upon their already established concepts that are expected by their followers. 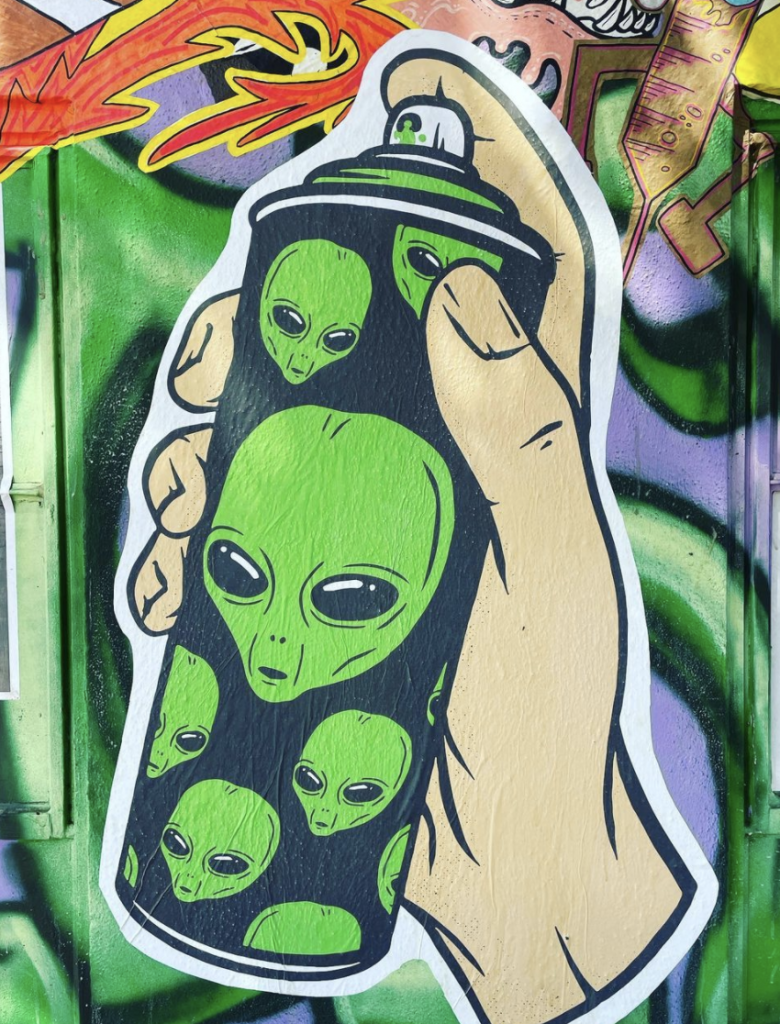 Similar to other street artists across the world, 2020 has been a bit of a slower year for going out. CTDZN noted that Covid has put a halt on artists wanting to get out in groups and get their work up in the city. There is some serious risk these days, from simple personal safety to city-wide lockdowns. CTDZN reminisced about going and walking for hours then being able to stop into a bar to grab a beer and warm up while out stickering the city. “I can’t meet up with other street artists and go on a walk together quite like we used to which is kinda a bummer.” On the flip side, CTDZN mentioned that so much time alone has led to a lot of “opportunity to buckle down,” describing this process as going “mad scientist on some new stuff and being able to come back to the streets and hit them harder.”

On the flip side, CTDZN mentioned that so much time alone has led to a lot of “opportunity to buckle down,” describing this process as going “mad scientist on some new stuff and being able to come back to the streets and hit them harder.”

Portland has always been CTDZN’s home; the nature of the city is very different from the stereotypical urban community. The street art community reflects that mindset, with CTDZN referring to the community as “unique” and adding, “It’s hard to want to be anywhere else with street art as my focus. It’s my home; I grew up here.” Portland received a lot of negative press during the 2020 election from the 45th president. However, CTZDN knows the peoples’ Portland, “You hear people say Portland is burning or there’s all the graffiti, or it’s all boarded up, but it doesn’t look like a war zone the way people make it sound.” The city emulates strong community connection as a citywide focus when a part of the city feels attacked whether it be by our local government, politics, or the police force. Since there are many different neighborhoods in Portland, it’s the melting pot of community that broadens the art in the streets. These walls reflect the social climate. “It’s a voice of the people, it’s a voice of the oppressed, I think it’s what street art has always been. It is a way for people to communicate and make their mark. I think the graffiti downtown, in regard to Ted Wheeler, the government, the police, is a reaction to the reality of what is going on,” CTDZN remarked.

It’s a voice of the people, it’s a voice of the oppressed, I think it’s what street art has always been. It is a way for people to communicate and make their mark. I think the graffiti downtown, in regard to Ted Wheeler, the government, the police, is a reaction to the reality of what is going on,” CTDZN remarked.

The community has given us the space to connect and work collectively to demand change. How art takes a role in the streets allows a seamless stream of opportunity for expression and communication. Each piece of art connects one person to another. CTDZN’s Alien speaks to a viewer, allowing them to become a part of the overall picture, and reminds us all that, while everyone feels a little alienated from time to time, we are not alone. 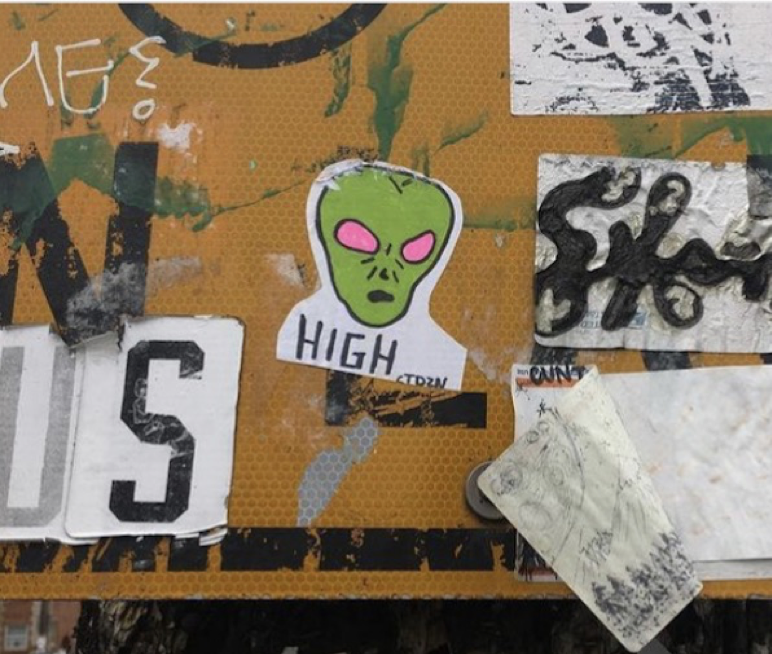 Moira Hampson is a street art photographer based in Portland, Oregon. Her passion for street art has driven her to travel the world to learn about street art and its relation to community.