This is the conclusion of a series of articles on art in Denver, CO. Read Parts One, Two, Three, and Four at their respective links.

Denver, Colorado, and Miami, Florida are approximately 2,066 miles apart, but there’s a surprising connection between the cities’ art scenes. On my last day in Denver, I got wind that Miami graffiti artist Krave was going to be painting a wall behind Dateline Gallery in the River North art district. So, I set off walking over to Dateline through the pastel-colored houses of Whittier and observed the cacti and peachblossoms you’d be hard-pressed to find growing in front yards in the grey, Appalachian city I was visiting from.

The relationship between Denver and Miami was spearheaded by Lorenzo Talcott, curator at ILA Gallery, which either stands for “I Love Art,” “I Live Authentic,” or is the inverse of founder Fa’al Ali’s last name. “One of my earliest art influences was Luis Valle when I visited Wynnewood,” Talcott said. Talcott grew up observing the Denver Chicano culture that his mother immersed him in, as well as passing by murals by local Colorado artists. One of the most influential was “Primavera” by Jerry Jaramillo, located on 41st and Tejon in the Denver’s Sunnyside neighborhood. That mural was sandblasted in 2014 but its memory lives on in Talcott’s drive to preserve the integrity of Denver’s art. 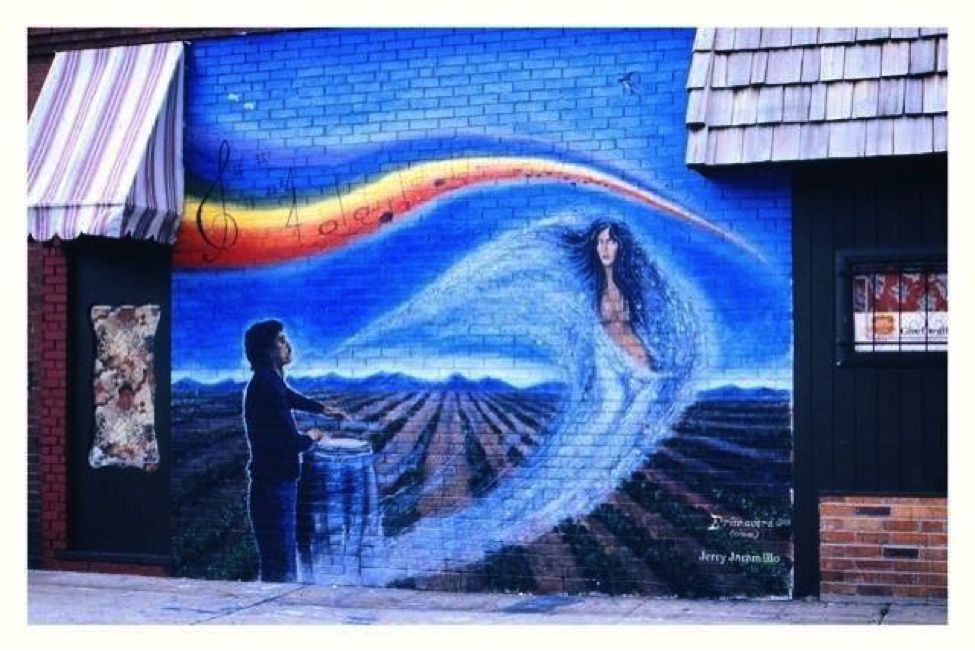 One of the most influential murals was “Primavera” by Jerry Jaramillo, located on 41st and Tejon in the Denver’s Sunnyside neighborhood. That mural was sandblasted in 2014 but its memory lives on in Talcott’s drive to preserve the integrity of Denver’s art.

However, Talcott’s most significant exposure to street art was actually not in Miami or Denver, but in Cyprus and Italy on a soul-searching trip he took after leaving his job at a 911 telecommunications company. “I grew up with a single mom in Denver, and street art and skateboarding were always a part of my world. When I saw the subways in Italy and the walls in Cyprus, I thought – how can I bring this to Colorado?” When Talcott then traveled to Miami, a chance encounter with Luis Valle at Briski Gallery, formerly located next to Jay Wakefield Brewery in Wynnewood, created a steady bond between the city of palm trees and tequila and the wind-swept, mountainous city of Denver.

Krave, a multimedia artist who calls himself a “graffiti futurist,” had stopped in Denver on the way to the slopes of Breckinridge with his family. Behind Dateline, one of the many alleys that criss-cross Denver’s streets is something of a hub for murals and tagging by artists passing through—I even spotted YINZER, one of the most recognizable tags in Pittsburgh. Jeromie Dorrance, who heads Dateline and is a close childhood friend of Talcott’s, has made sure that the few blocks of Larimer Street surrounding Dateline are full of artwork. I sat with Jeromie on a concrete ridge at the side of the alleyway and watched Krave summit a ladder to leave his signature image on the wall.

That signature image is “El Mono Fresco,” a stylized caricature of a monkey. “El Mono Fresco is about how as an artist, I’ve always felt like a performing monkey,” Krave said. “The monkey is performing, but he’s chill. It’s a daily routine.” The feeling of being a performing monkey was one I could well relate too—at the time, I had been struggling with my own artistic identity as an author who’d just started sharing my work publicly. Just before traveling to Denver, I had done my first bookstore reading event, and the idea of having to perform parts of yourself to an audience had been on my mind. Where does your work end and where do you begin? How entitled are consumers to your work, your words, and your behavior? How far does that agreement extend? I’d spent a day wandering around downtown Boulder thinking about those exact questions. 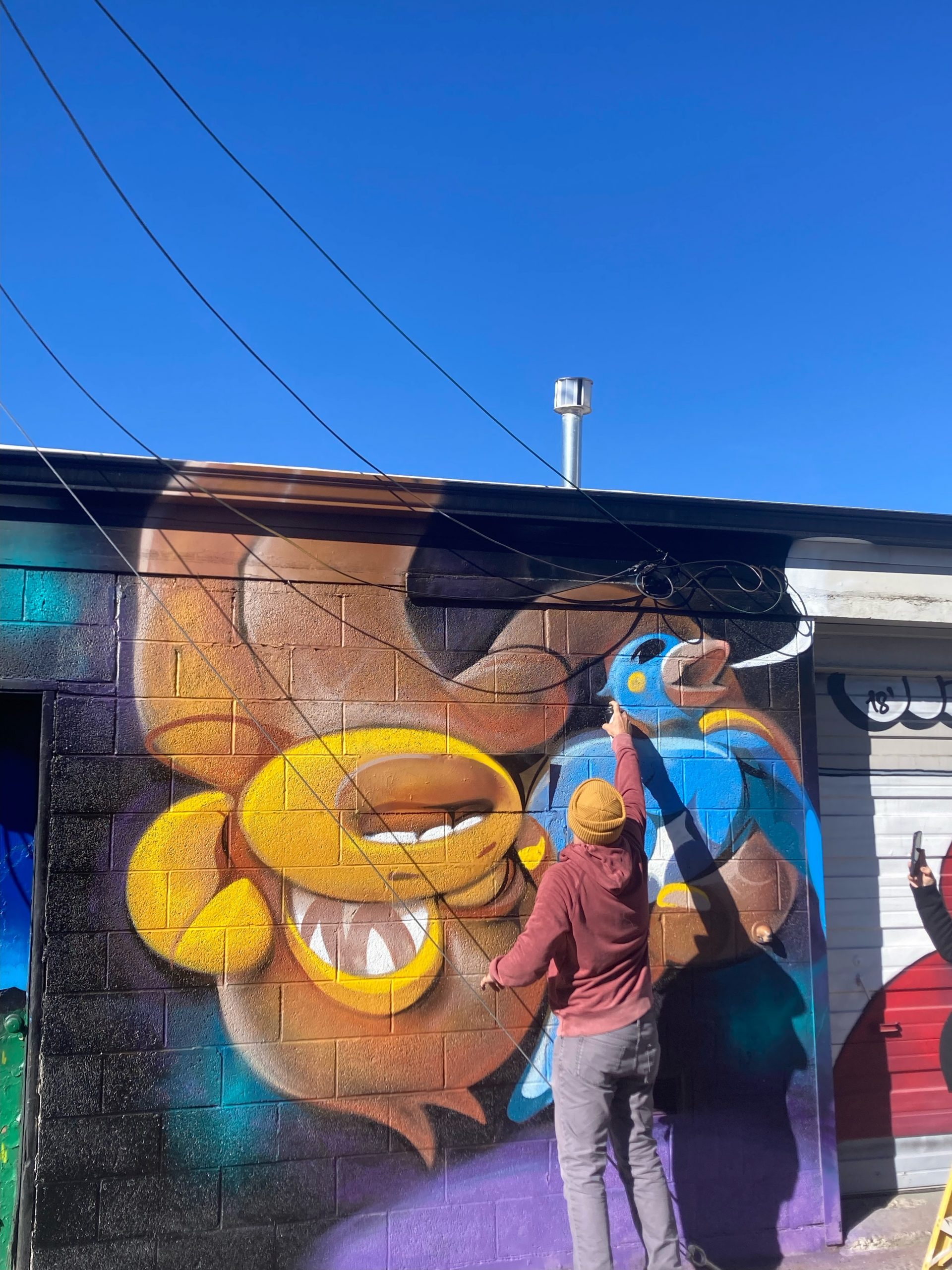 “El Mono Fresco is about how as an artist, I’ve always felt like a performing monkey,” Krave said. “The monkey is performing, but he’s chill. It’s a daily routine.”

El Mono Fresco is a symbol of defiance in that it’s the artist acknowledging that they’re being watched—the artistic equivalent of giving the finger to a security camera. “When people talk about murals, they talk about the artists as if they’re dead,” Krave said, spraying a frost of white onto the monkey’s brown fur for texture. “And they make up their own stories about the work. I consider myself a graffiti writer if I have to be labeled, but people are going to define me however they want, so I don’t really have any control over that, he said. Watching him paint underneath the cloudless blue sky with the white Rockies cresting the horizon above the wall was meditative. 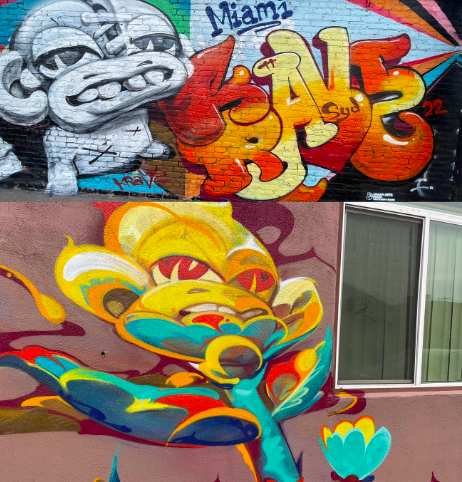 “When people talk about murals, they talk about the artists as if they’re dead,” Krave said.

Traveling always puts me in a reflective state, but on that last afternoon in Denver, I found myself thinking about how each place has its own story and the mainstream art industry loses out by treating everywhere it goes as a commodity. While each art scene is undeniably local, waxing poetic about the Los Angeles art scene or the Miami art scene glosses over an intrinsic fact about every place: People actually live there, and if anything were to make you feel like a performing monkey as an artist, it would be gawking photographers and reporters treating your home like a zoo. Krave’s Instagram bio features the line: “I’d rather be hungry in the jungle than fed up in the zoo.” 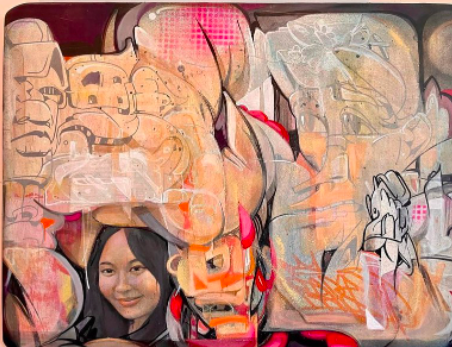 Krave’s Instagram bio features the line: “I’d rather be hungry in the jungle than fed up in the zoo.”

Yet art is also meant to be shared with others, so we have to find ways to center artists and their communities. At the time Talcott started working with Dateline, no gallery in Denver was showcasing street artists. As the curator of one of the first smaller galleries in Denver, Talcott wanted to create an artist-focused space that didn’t make a distinction between graffiti and art, but also recognized the socio-economic baggage that comes with the term graffiti.

“I wanted to bring the illest contemporary artists of our time to the city I grew up in,” he said. “In the art world, we’re living through a history that’s forever changing. I really started being an advocate for the artists themselves, like ‘I wanna make sure you get paid.’” Meeting Anthony Garcia, Sr’s community advocacy group, Birdseed Collective, helped show him a model of community-focused art. Additionally, Chris Haven and Patrick McGregor helped promote ILA Gallery to the street art world when Talcott started it with Fa’al Ali. 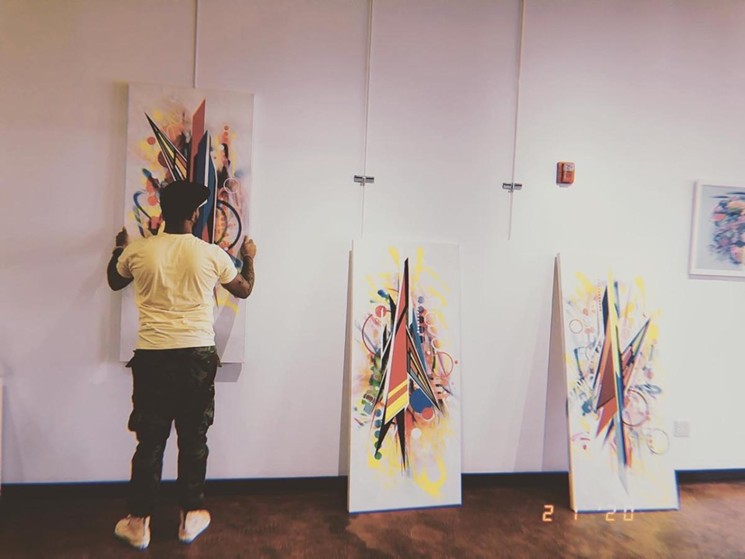 “I wanted to bring the illest contemporary artists of our time to the city I grew up in,” he said.  “In the art world, we’re living through a history that’s forever changing. I really started being an advocate for the artists themselves, like ‘I wanna make sure you get paid.’”

Talcott introduced his mentor, Luis Valle to Colorado’s Crush Walls in 2016 and 2017, cementing the city’s relationship with Miami artists. Valle’s art, which is influenced by Latin American indigenous spirituality, spoke to people in Denver as much as it did in Miami.

In the years since, ILA has thrived in the local community. “I’ve always been trying to figure out how to support people doing what they love to do and making a fair wage at the same time,” Talcott said. Though the gallery has taken a number of financial hits due to the pandemic, Talcott continues to apply to city grants and hold events that open up opportunities for local DJ’s and local food vendors to grow their own businesses with ILA.

Eventually, Krave packed up his things to head to Breckinridge with his wife and daughter, and we said our goodbyes. Jeromie Dorrance and I chatted about his own journey in and out of Denver, and he remarked: “Everywhere I went reminded me of here.” 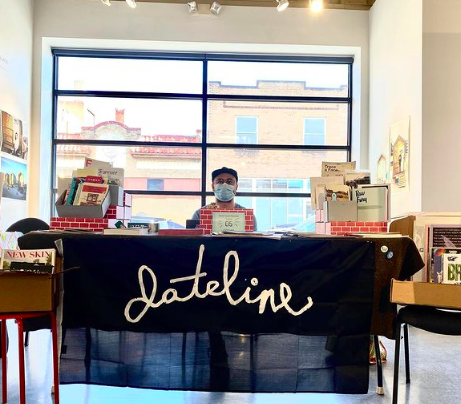 Jeromie Dorrance and I chatted about his own journey in and out of Denver, and he remarked: “Everywhere I went reminded me of here.”

As a lifelong cheapskate who claims I can put up with anything from air travel, I’d selected a flight home that had an eight-hour layover in Las Vegas. Everyone told me I’d hate Vegas, saying it was crass, commercialist, stupid, everything that a quote-unquote serious, intellectually minded author like myself should hate. But one after too many shots of vodka, I stood speechless and shitfaced in front of the Bellagio Fountain and wondered at how serendipitous it is that things happen they do.

I never would have come to Denver at all if not for losing money and time from a cancelled writers’ conference in Lake Havasu. In my own personal life, it’s frequently hard not to focus on everything I’ve lost from COVID-19. But as I braced myself against the railing and watched the garish neon lights of Vegas turned the black desert night purple and the streams of fountain water resplendent white, I thought instead about everything I’d gained.

I want to close this series with something Casey Kawaguchi said to me when we first spoke at his studio—“The contrast within a story is what I find attractive.” Every city, and in turn each of us, experiences loss, gain, growth, and decay. The contrasts and contradictions within the streets are where the art comes in.