Dream Until Your Its Reality: Why One NYC Artist Will Keep Writing on Sidewalks Until You Follow Your Dreams 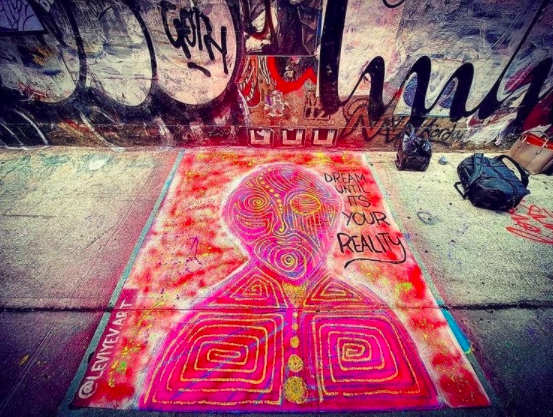 When Leviyev writes “Dream Until Its Your Reality,” he’s so quick that a passerby might assume he’s tying his shoe. In under eight seconds, he leaves his mark before resuming his brisk walk as freshly squeezed paint dries to the pavement. His speed is a result of repetition. After covering Manhattan and parts of Brooklyn and Queens, his hand can fire off a tag without a second thought.

On my way to meet the artist, I passed at least five “Dream Until Its Your Reality” tags scrawled across the sidewalk. Once you notice his tag, it’s impossible to miss the cheery message which not only covers sidewalks, but almost any surface Krink markers can stick to. 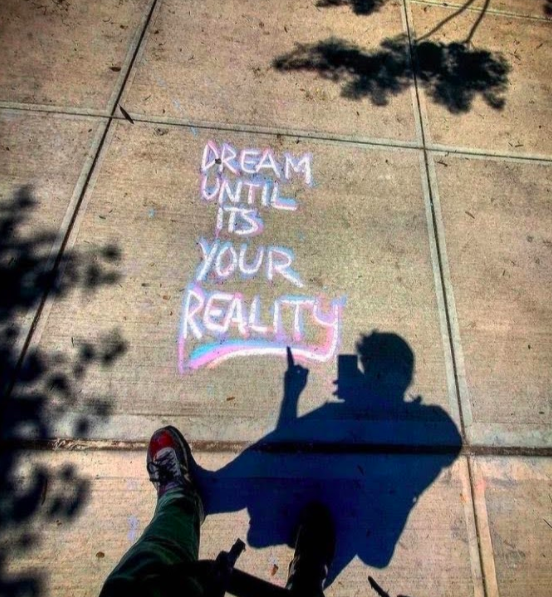 Leviyev waits for me casually beneath the arch at Washington Square Park. He left his classic paint-splattered lab coat at home, instead opting for an unassuming outfit. The flecks of paint are barely noticeable on his pants. His crossbody bag hides the copious amount of markers itching to be uncapped.

We stand a few feet behind his tag on the barrier in front of the park before he decides we’ll walk through the Meatpacking District. “I do have to get out of this area because I completely covered the area,” Leviyev said with a laugh. And we’re off. 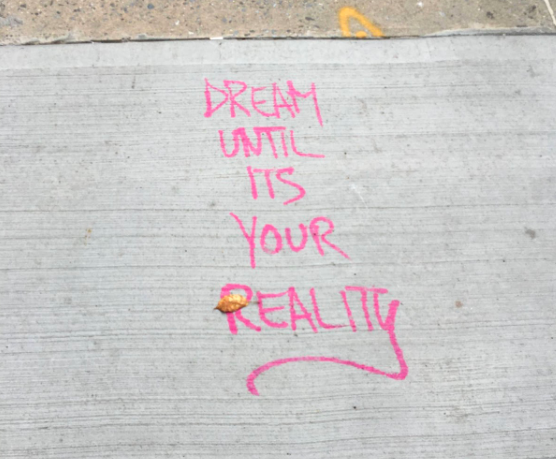 Leviyev began writing his tag five years ago in chalk. He was inspired by the likes of Keith Haring and Hash Halper, but it actually started as a joke.

“My mom reads The Secret religiously and I wrote this phrase down as a thing to laugh at the book and then people liked it,” Leviyev said. “I was, like, okay, maybe I have something so I started writing it all over the city in chalk and then I switched to paint.”

The transition came about after a conversation with a friend who told him it was hypocritical to tell others to chase their dreams without fully committing to the message itself and making it permanent. Leviyev took their words to heart and began writing his reality into existence one paint-laden tag at a time. 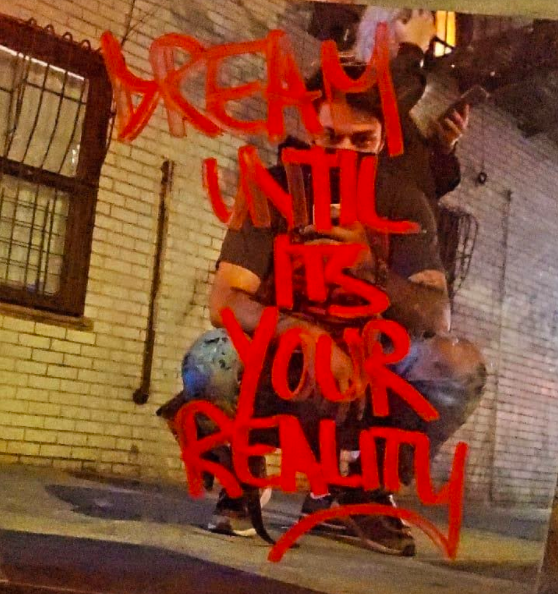 For Leviyev, his reality is “a modern day Renaissance.” This aligns with the resurgence in graffiti created during the pandemic. With boarded up shops and empty streets, the past year was the perfect training ground for new writers. Some might even call it “heaven” as Leviyev did when he reflected on the ease of writing on unlimited canvas space in a desolate New York.

The Renaissance Leviyev envisions for himself is full of possibility and change. Asked what that would look like for him, he had a vision: “Technological. Mainly because of the rise in NFTs, the chains of cryptocurrency. It’s not going to be a religious Renaissance that we saw before. It’s going to be very scientific. Basically we would be breaking our ancestral chains as an artist and as a community and trying to do something completely different. To me, it’s like stepping away from my family’s religious background.” 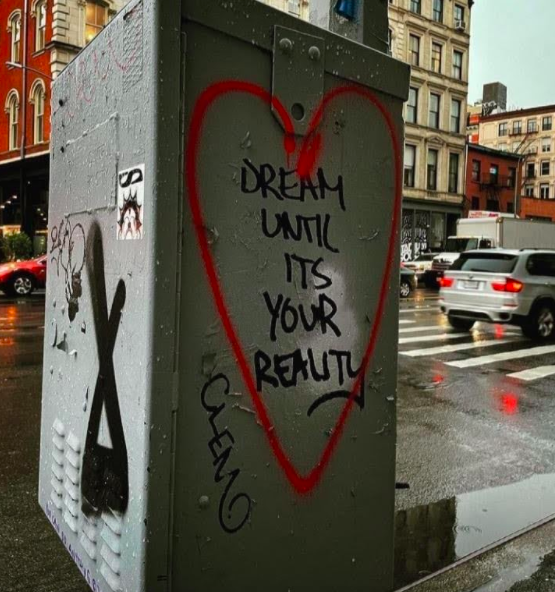 For Leviyev, his reality is a modern day Renaissance. “It’s not going to be a religious Renaissance that we saw before. It’s going to be very scientific. Basically we would be breaking our ancestral chains as an artist and as a community and trying to do something completely different. To me, it’s like stepping away from my family’s religious background.”

Leviyev and his family emigrated from Uzbekistan when he was 7 years old. He grew up in Queens and started writing in high school with a group of artists.

“Queens was a weird environment,” he said. “It’s a melting pot but also not because there are cliques of communities and I managed to be able to venture through all of them.”

This offered him a diverse diet of art and culture from the abstract works of Jackson Pollock to the graffiti he saw on the street. Going out with friends to hit heaven spots, dangerously high places, seemed like a logical next step in his creative journey. 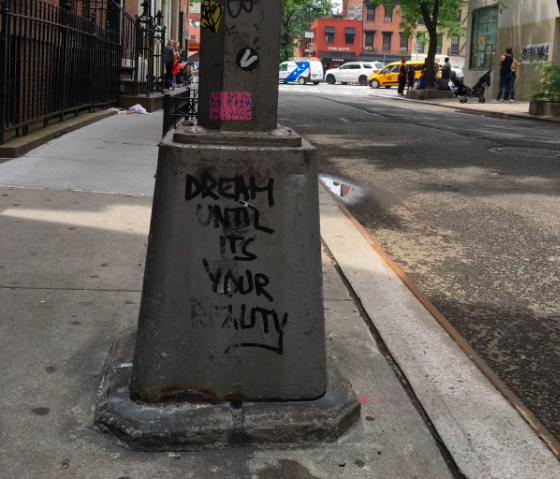 “The whole point of graffiti is it’s an illegal commercial. We don’t have the capital that major corporations have but we have ideas corporations wish they had.”

Initially, he wrote under a different alias before he “decided it didn’t have a lot of substance for the people; it was just a name and it didn’t have any draw to it,” Leviyev said. “The whole point of graffiti is it’s an illegal commercial. We don’t have the capital that major corporations have but we have ideas corporations wish they had.”

Even so, Leviyev helps these companies out from time to time with his day job at a design and events company. After dropping out of high school, he cut his design teeth in off-Broadway productions where he learned carpentry, rigging, lighting, and sound design. Through working gigs in off-Broadway theater and the event industry, he met Matthew Carrington who would eventually become a friend and proud collector of his art.

“When I first met Leviyev, he had this very energetic and youthful vibe,” Carrington said. “The more I got to know him, I came to understand that he is a persistent individual.”

Carrington now owns six to seven paintings which veer toward a geometric sensibility unlike the written message of Leviyev’s tags. He enjoys seeing the paintings in his home on a daily basis but still appreciates the tags when he gets the chance to walk by them.

“‘Dream Until Its Your Reality’ represents the necessary hustle, sacrifice and work to achieve one’s goals,” Carrington said. The message is a reflection of Leviyev’s dogged determination to find artistic freedom through whatever opportunity presents itself. 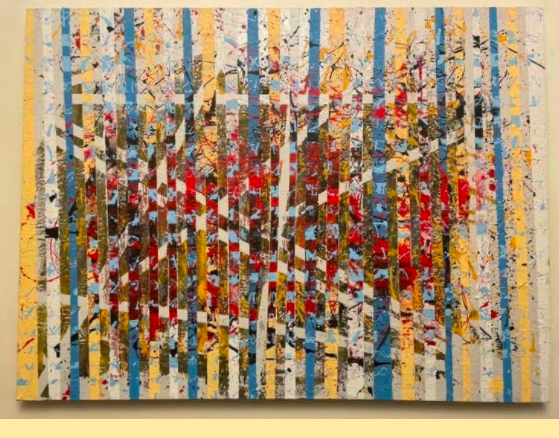 “‘Dream Until Its Your Reality’ represents the necessary hustle, sacrifice and work to achieve one’s goals,” Carrington said.

His job, for instance, helps support his painting habit. One marker lasts seven to eight tags and at around $15 a pop, they don’t come cheap. As Leviyev has matured, he believes it’s important to support local businesses like Scrapyard and buy the paint himself.

He doesn’t limit himself to one medium but instead allows his ideas to take shape in the medium that best suits them. His abstract art, for example, is very process-oriented. Drawing from the tradition of Lucio Fontana, an Argentine-Italian painter known to slash his paintings, Leviyev rips and burns some of his work.

“It would be a blank canvas and he would just slice it,” Leviyev said. “That to me was like fuck yeah. It was so different and I was, like, I want to capitalize on that because I haven’t seen it in galleries in New York. Everything’s epoxy resin, shiny, and super finished and it’s, like, why? Why do I have to do that?”

The conclusion he reached: he doesn’t have to. At 29-years-old, he is free to make art for himself and the people. “Dream Until Its Your Reality” embraces the idea of accessible art for all. Whether it brightens people’s day as they’re looking down at their phone or simply shuffling along, it asks nothing of them except a brief moment of acknowledgement. Leviyev respects the people who call New York home and adheres to a personal code of ethics which reflects this.

“You shouldn’t graffiti religious monuments, mom and pops, small shops,” Leviyev said. “Government property, go fuck it up. They have unlimited resources. They will probably give the homeless jobs to clean up graffiti so I will provide work.” 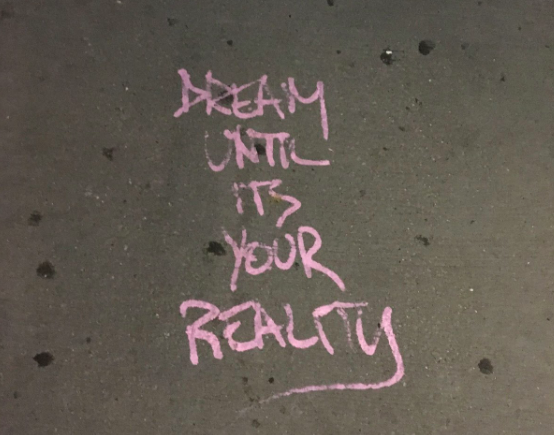 “It would be a blank canvas and he would just slice it,” Leviyev said. “That to me was like fuck yeah. It was so different and I was, like, I want to capitalize on that because I haven’t seen it in galleries in New York. Everything’s epoxy resin, shiny, and super finished and it’s, like, why? Why do I have to do that?”

There’s nothing like a dedicated artist to help stimulate the local economy. With his string of wooden beads wrapped around his wrist that he counts when he feels nervous, I can’t help but think of the role he plays in people’s daily lives. From the people who post his work on Instagram with their feet coyly positioned in frame to the deeply personal messages he receives over DM, it’s clear that his work matters. 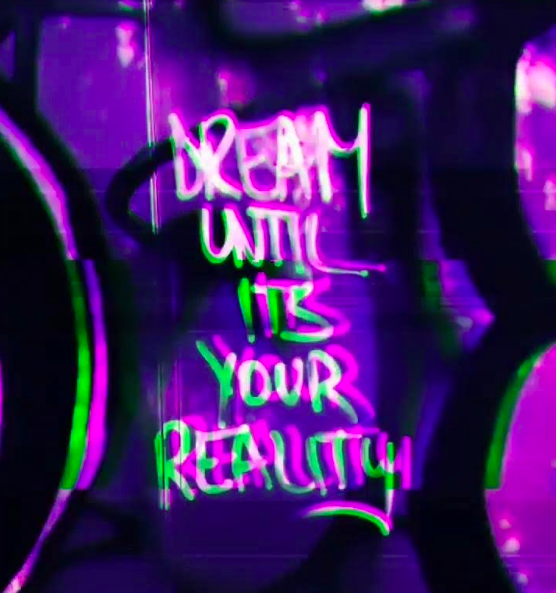 All of the “Dream Until Its Your Reality” tags scattered across the city are like the beads in his bracelet, connected by a thread of hope and resilience. He said he wants to leave a legacy behind and be remembered by a city. Once he covers all five boroughs with his message, he plans to stop writing it and switch to a new one. He aims to create art that is both thought-provoking and motivational for a city inhabited by dreamers.

What do you want to be remembered by? “My art. My lifestyle is chaotic but my art is my Zen place so if I can leave that behind, I’m a happy camper,” Leviyev said. “We leave so much trash behind. I just want my trash to be pretty.”

Madeline Katz is a writer currently based in New York. Her articles and short stories appear in Fordham University’s The Observer and Grain of Salt Mag. She enjoys seeing the layers of street art build up around the city as they constantly change. She is currently intrigued by the aesthetic discourse surrounding the differences between Posca and Krink markers.