Life’s A Glitch: Dylon Thomas Burns and The Power of Human Connection

Dylon Thomas Burns moves with steady precision. When I arrived at the Clinton Hall beer garden for our interview in Williamsburg, he was already at the bar waiting for me, his paint-stained palms clutching a happy hour menu. At 6pm, it was his first break of the day.

I was struck by the artist’s air of mystery when we first met in February at The Local, a hostel in Long Island City that occasionally hosts art exhibitions. In a room full of familiar faces, Burns was one of the few I didn’t recognize. The large-scale canvasses he had on display sparked a similar fascination. Among the many featured in Sr. Lasso’s group show “Ars Gratia Artis,” Burns’s two pieces hung in confounding juxtaposition. One depicted a woman in profile, with loose line work superimposed on multi-layered graffiti lettering. The other had a variation of geometric forms in contrasting hues of blue and pink.

Burns stood in close proximity, willing to engage with passerbys about his body of work. Our encounter was brief, but I followed him on Instagram, assuming he would pop up again.

I hadn’t seen him since. His social media presence was touch-and-go – stories with white noise that read “Please stand by. Signal required,” pictures that were dated and time stamped to resemble journal entries, often mentioning “The Lonely Stranger.”

I didn’t know what any of it meant, but I was determined to crack the code.

A few months later, street artist OG Millie curated six murals along the stairwell leading up to Clinton Hall’s rooftop. The lineup included her own work, alongside Burns, Fluidtoons, JPO, Dirt Cobain, and John Beijer. Burns painted a portrait of Albert Einstein on the top level, the physicist’s wacky expression still visible from four stories below.

I floated the idea for an interview after we shared a few glasses of complementary Frosé at the opening reception. He agreed to tell me his story.

It all started with his initials. As a child, Burns wrote his name anywhere he wasn’t supposed to – the walls of his New Jersey home, his bedsheets. When his family moved, he wanted the next owners to know exactly who had lived there before. Eventually, he formulated the natural link between creativity and escapism. Awestruck by the symphonic synchronization of nature, he would venture into the nearby woods to reflect or take a nap. Burns found comfort in the quiet harmonies.

“I showed up to my first walls with a paintbrush and a spray can. People asked,`What are you doing? You can’t do that!’” Burns laughed. “I said, ‘I don’t give a shit. I’m from Jersey.’”

His foray across the Hudson began at a drag bar named Boots and Saddle in Greenwich Village. Burns was working as an art director when the bar hired him to paint some alcohol advertisements. With a bit of creative freedom, he pushed boundaries. His portraits of drag queens opening beers in suggestive positions allured partygoers, while Burns worked behind the scenes to better educate brands about the community. The artist had no tangible ties to the LGBTQ community, however, his ability to relate to strangers presented him with an opportunity to expand his lexicon. His work there landed him some walls along Christopher Street, where he painted Bridget Breeze and other activists for LGBTQ rights.

“I showed up to my first walls with a paintbrush and a spray can. People asked,`What are you doing? You can’t do that!’” Burns laughed. “I said, ‘I don’t give a shit. I’m from Jersey.’”

Art was his passion, but he also needed to pay his bills.

After he made some money, Burns had a realization: maybe he could be a self-sufficient artist. Until then, he’d spent his life believing he had to be practical. Art was his passion, but he also needed to pay his bills. His experience on Christopher Street encouraged him to take a risk and resign from his director position.

Instinct has consistently propelled his career forward. It motivated Burns to take that leap into the unknown five years ago, and it still informs his art today. While the artist’s style varies from geometric abstraction to motifs of classical sculptures, Burns finds his muses through his intuition, infusing his art with the range of emotions he experiences on a daily basis. He usually channels these feelings into portraits of women.

If he hears a sound, he sees a color; when he feels something, he sees a form.

The mathematically-inclined portion of his brain also plays a role. If he hears a sound, he sees a color; when he feels something, he sees a form. The caricature he’s most recognized for – a face structured around his initials, DTB – has evolved into a self-portrait, its rendering dependent on whatever mood he’s in that day. Before he starts to paint, he draws the face four or five times. Each represents a different facet of his personality.

“I went through a dark time in my life and painting was my outlet. Since then, I’ve just developed a style that looks somewhat of the same hands,” Burns said. “In the end, your own hand lies in each expression. If you don’t take those opportunities, you’re never gonna learn your full artistic skill sets. There are no rules. Do what makes you happy.”

Burns doesn’t conform to the strict labels of street or fine artist. Each medium calls to him in its own way. He works on canvas when he’s inspired by the energy of the streets, and on walls when he thinks the surface would be perfect for a certain concept. However, the canvas usually comes first.

“That’s just what I’ve found in my survival as an artist. I’ll always have a canvas, but I may not have a wall,” Burns explained. “I want to be doing this when I’m old. Maybe I’ll be painting walls at 90, but I’ll definitely still be painting on canvas.”

His aesthetic deviates with each new work. On occasion Burns paints pop culture references like Kesha and Jim Morrison, but these figures are intermittently replaced with intricate flowers or arbitrary swirls of color. His vivid palette remains consistent, unifying elements that would otherwise seem jarring: dismembered heads, seashells, cherubs. Due to his unpredictable schedule, he delays sharing his pieces until weeks, or even months, later.

To supplement his income, Burns also runs a company called MADE Murals. There, he helps street artists find commercial work, teaching them how to prosper financially along the way. He also does freelance graphic design, which he refers to as the “computational” side of his brain, rather than the “expressive” side he paints with. Burns landed a career where he does both.

“I feel like Jeckyll and Hyde sometimes,” he admitted.

His Instagram presence is an attempt to personify ‘The Lonely Stranger,’ a concept stemming from the tattoo he has on his bicep, depicting a businessman holding hands with a child.

When he finds himself caught between these contrasting identities, Burns uses social media as an outlet. His Instagram presence is an attempt to personify ‘The Lonely Stranger,’ a concept stemming from the tattoo he has on his bicep, depicting a businessman holding hands with a child.

Burns believes staying close to his inner child is the only way to make sense of the chaos and form meaningful relationships. When he says “please stand by,” it means he has a lot to articulate, but he just hasn’t found the right words to do so. Glitching, static, and asking others to “stay tuned” are a large part of his persona, because even though Burns doesn’t know when he’ll be back, he hopes his audience is around to see it.

“I try to send signals to similar people who may be like ‘what’s going on here?’”

The signals had finally reached me. After asking Burns a few questions, I started to fill in the blanks, recalling the consecutive Friday nights I spent at Boots and Saddle during a time I was confused and struggling to recalibrate. I had just lost someone close to me, and drag distracted me from the noise inside my head. The bar has since closed, and I’m unable to clearly visualize the art that once lined the inside walls. But I remember how it made me feel –  comforted, confident, in the mood to buy another cocktail.

Dylon Thomas Burns may be here and gone, but his art leaves a lasting impression. In the evening’s growing darkness, he walked me through the stairwell at Clinton Hall to explain his current project: a set of hopscotches and drinking games for bar patrons to enjoy. We stopped on the last flight to admire his completed Einstein mural.

“I was feeling down when I painted this,” he pointed to his caricature next to Einstein. “Look at how the face drips.”

I inspected the mural for visible brush strokes. The image that inspired Burns captures Einstein playfully sticking his tongue out, the background continuing indefinitely into the depths of the digital ether. Since E=MC2, Burns believes emotion is faster than a thought; it’s the first thing that comes to light. But relativity doesn’t always equate to detachment. A compelling artist utilizes this vulnerability to tap into an ever-changing nexus of intercommunication.

Albert Einstein stayed true to both sides of himself, even when the signal was interrupted. Burns succeeds in doing the same. Life changes quickly, and someone can disappear in a second. In that same instant, even a momentary lapse can impact the vortex.

Sometimes it feels like an impulse, its effect a tiny glitch in the system.

In an oversaturated online sphere, Burns made me stop and think about what it means to truly connect. I didn’t expect the artist standing in front of me at Clinton Hall to have any ties to what was once my favorite drag haven in Greenwich Village, but the unexpected overlap speaks to the subconscious ways we relate to the world. Art has the ability to reach beyond the purely visual and into the metaphysical, capturing moments as fleeting as the emotions that once defined them. Burns thrives among this transience. To some he’s a friend; others, a stranger. 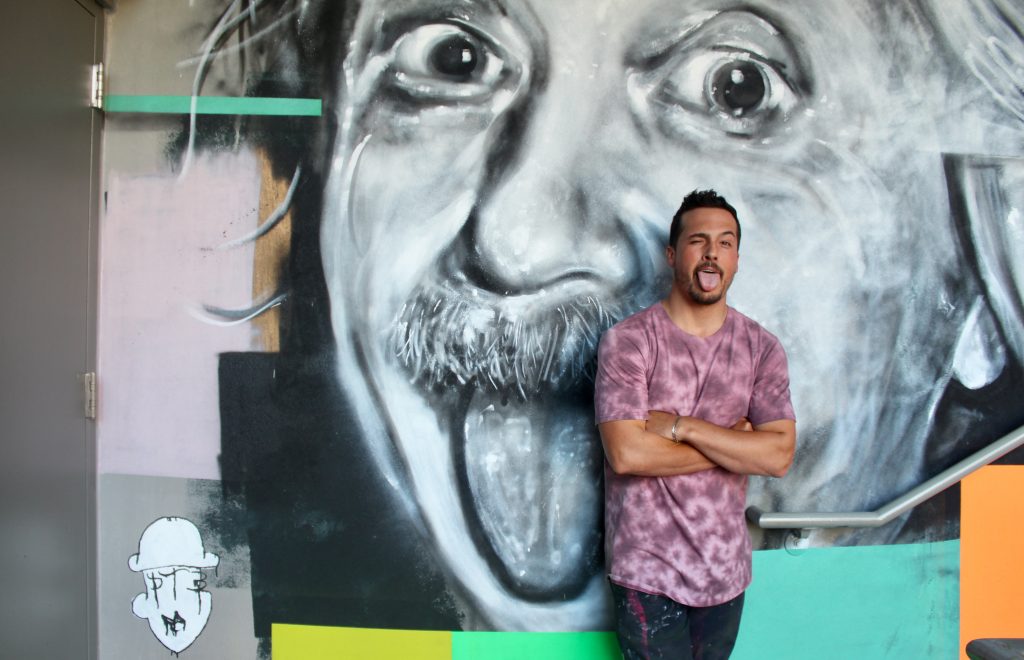 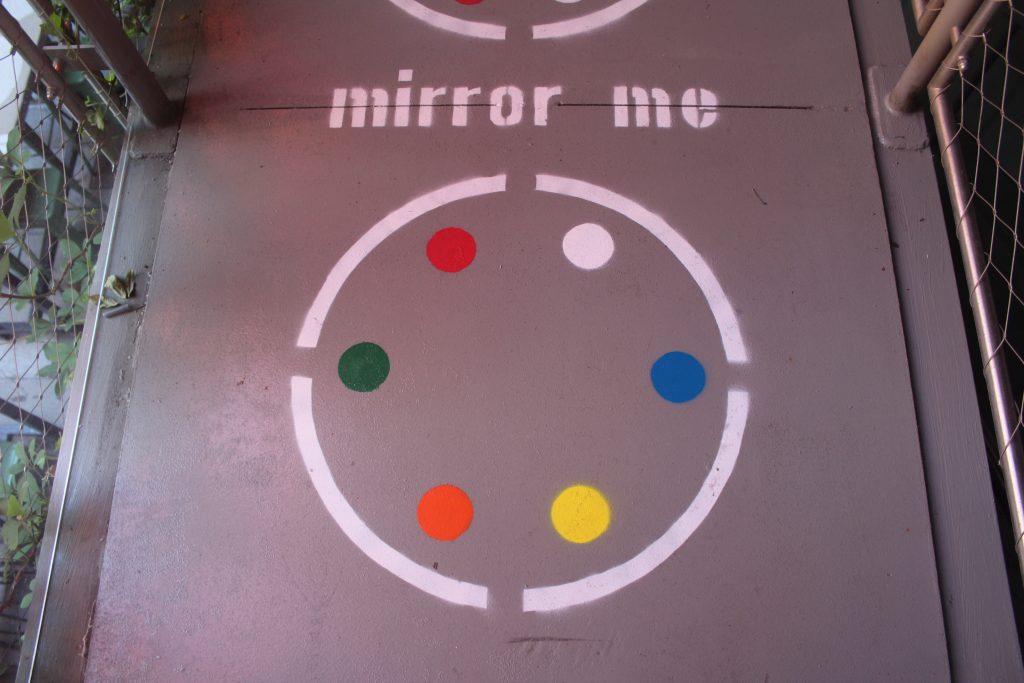 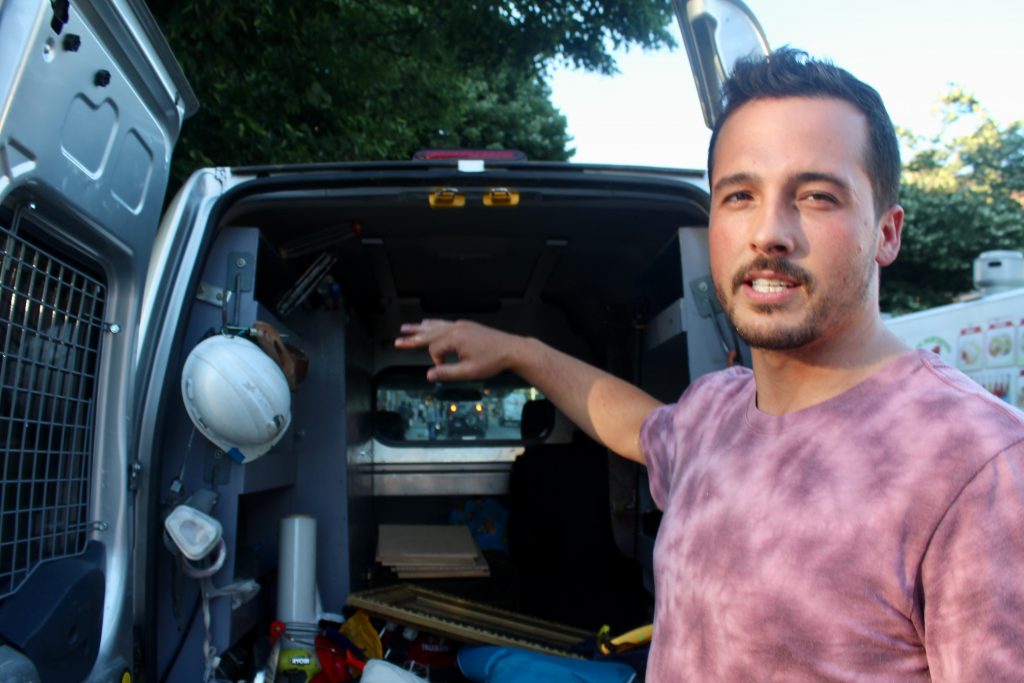 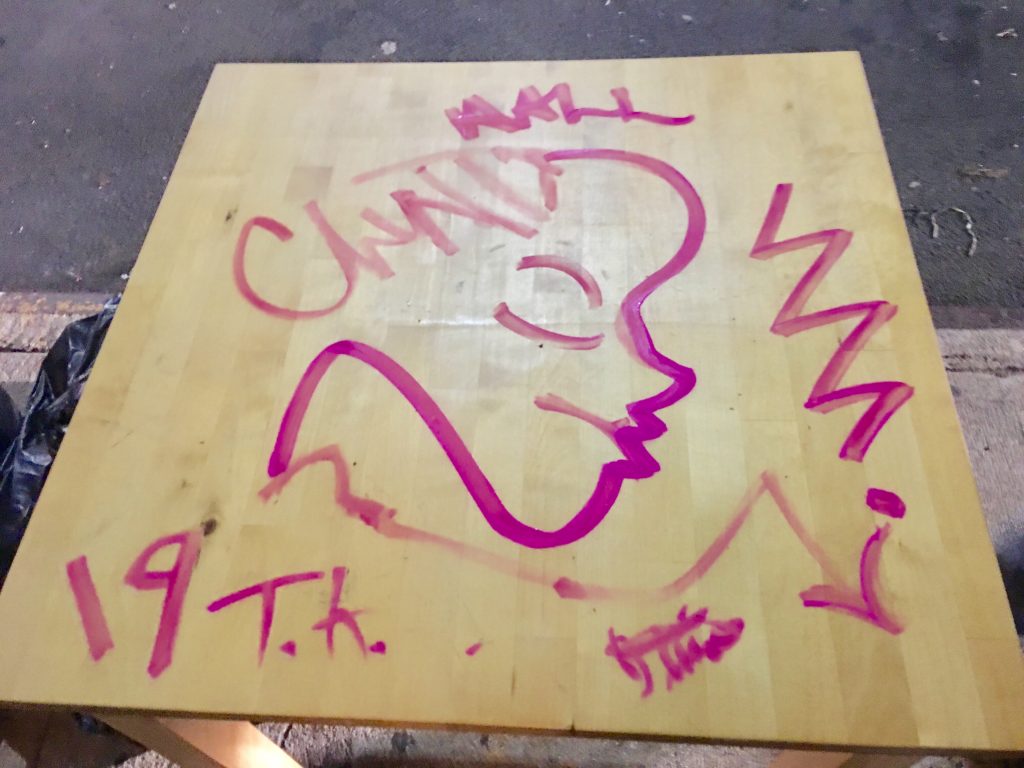 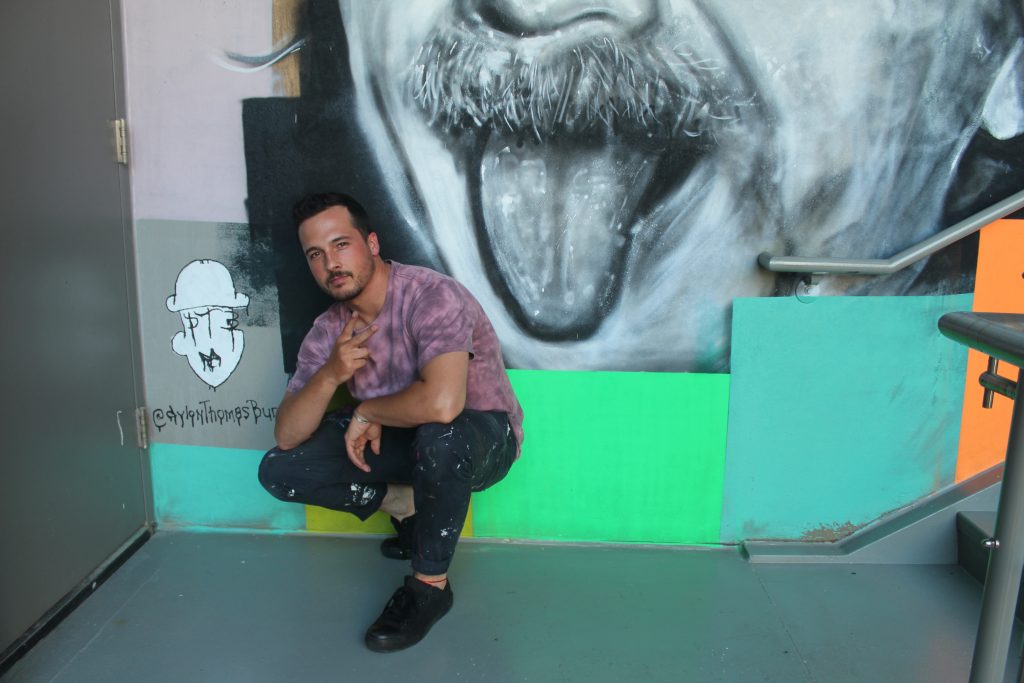 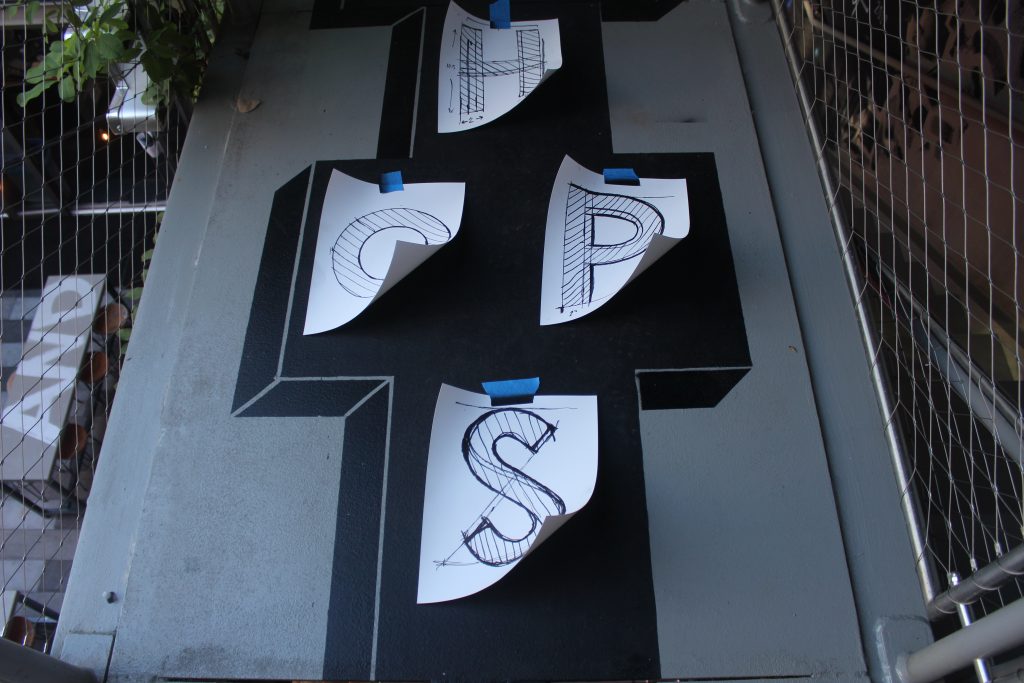 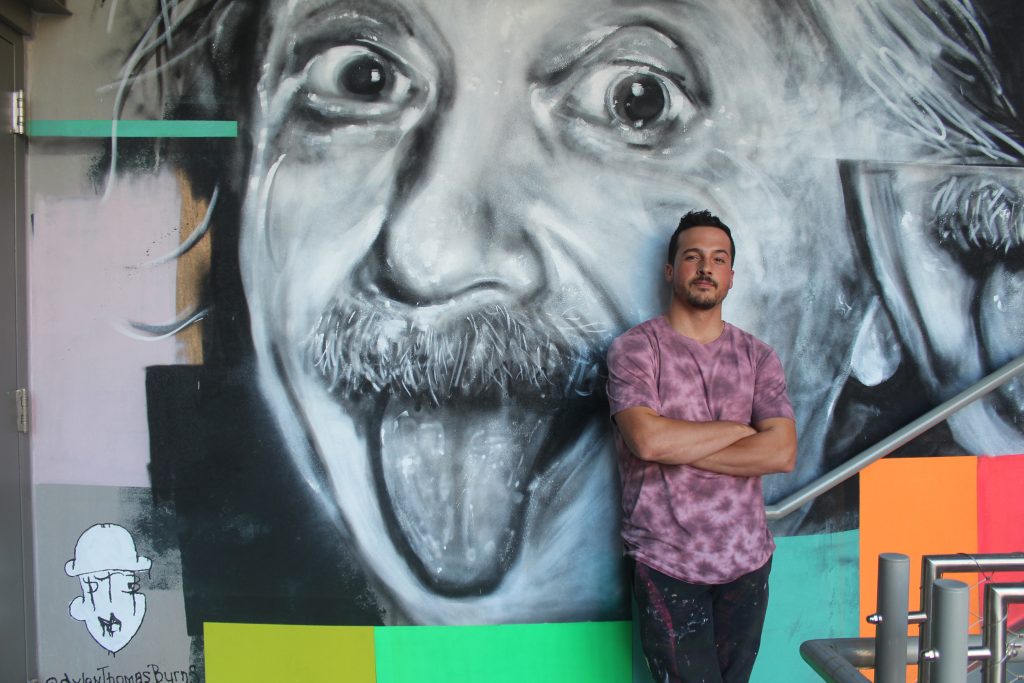 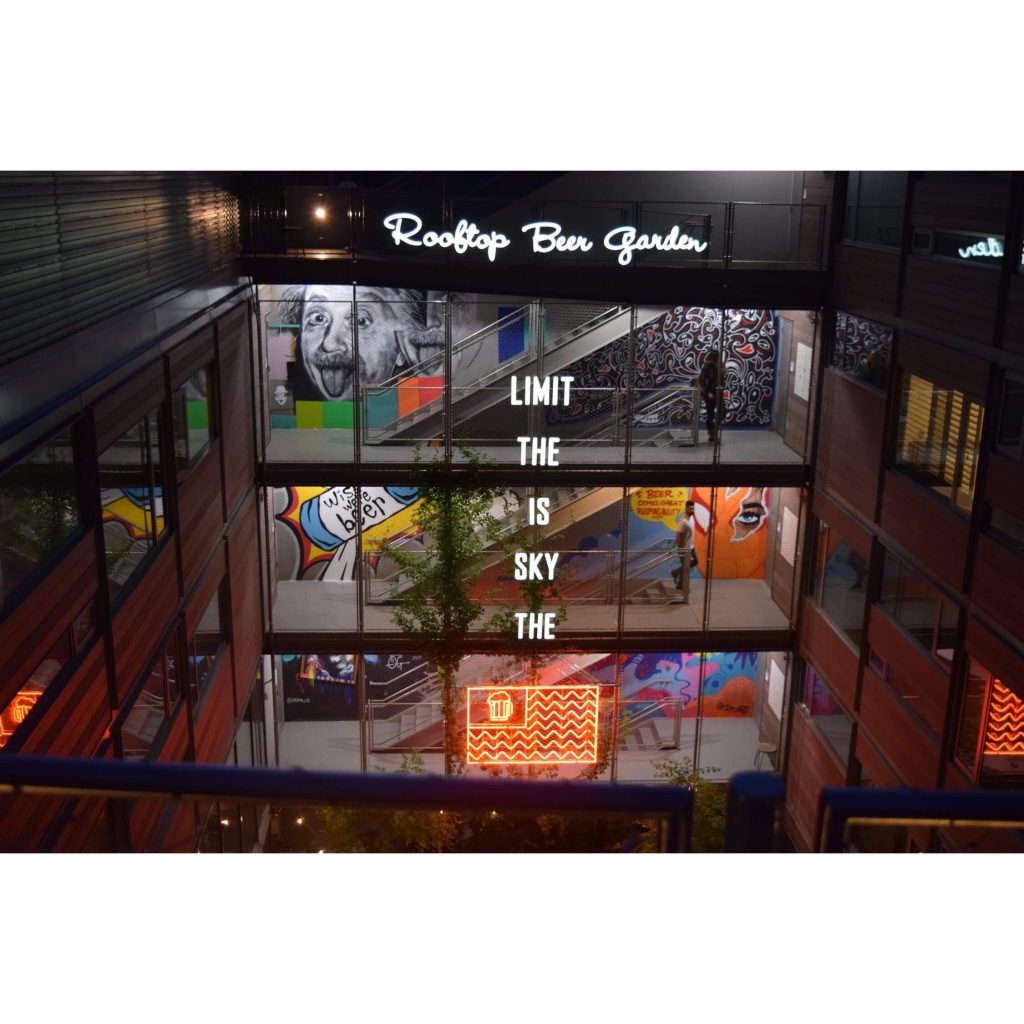 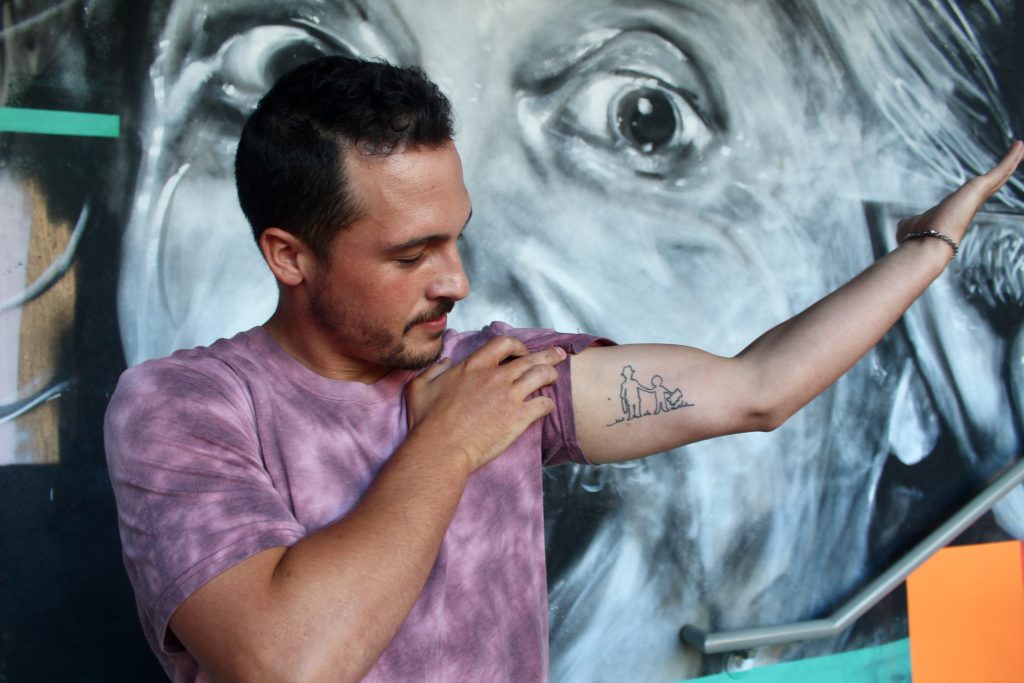 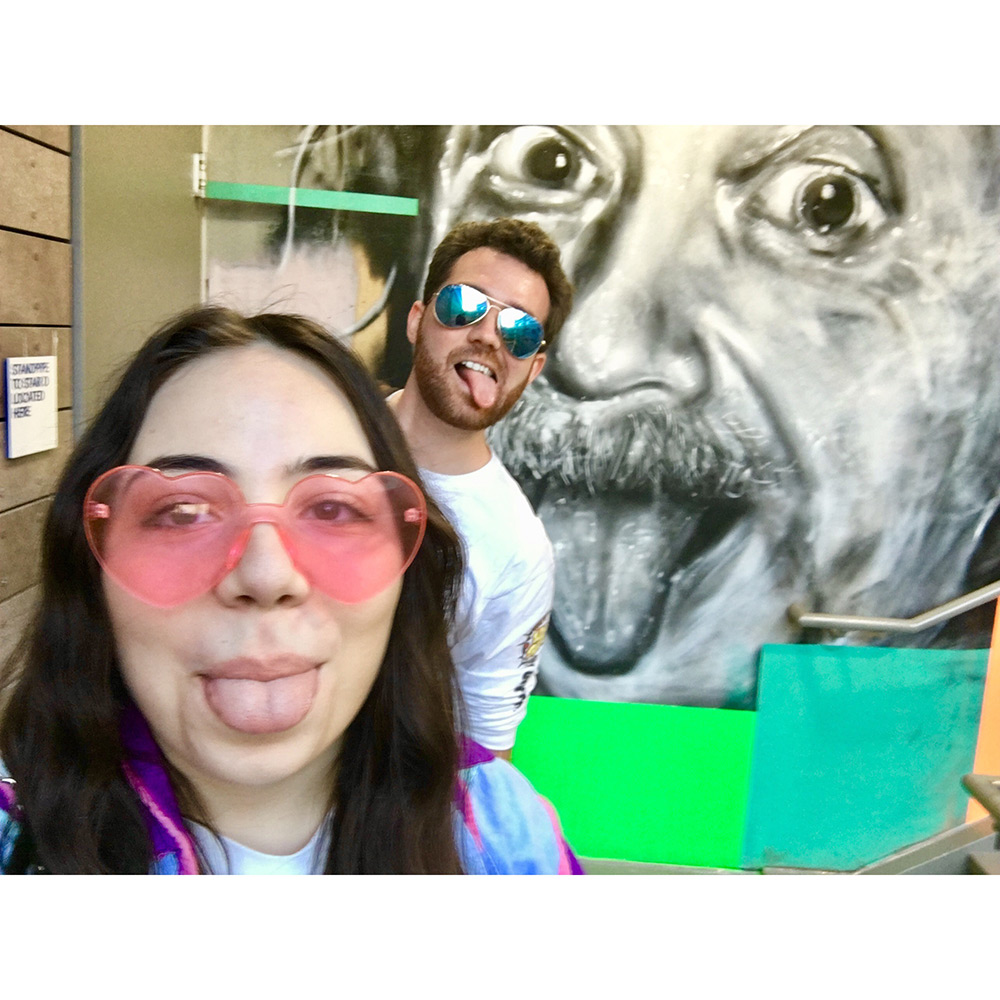 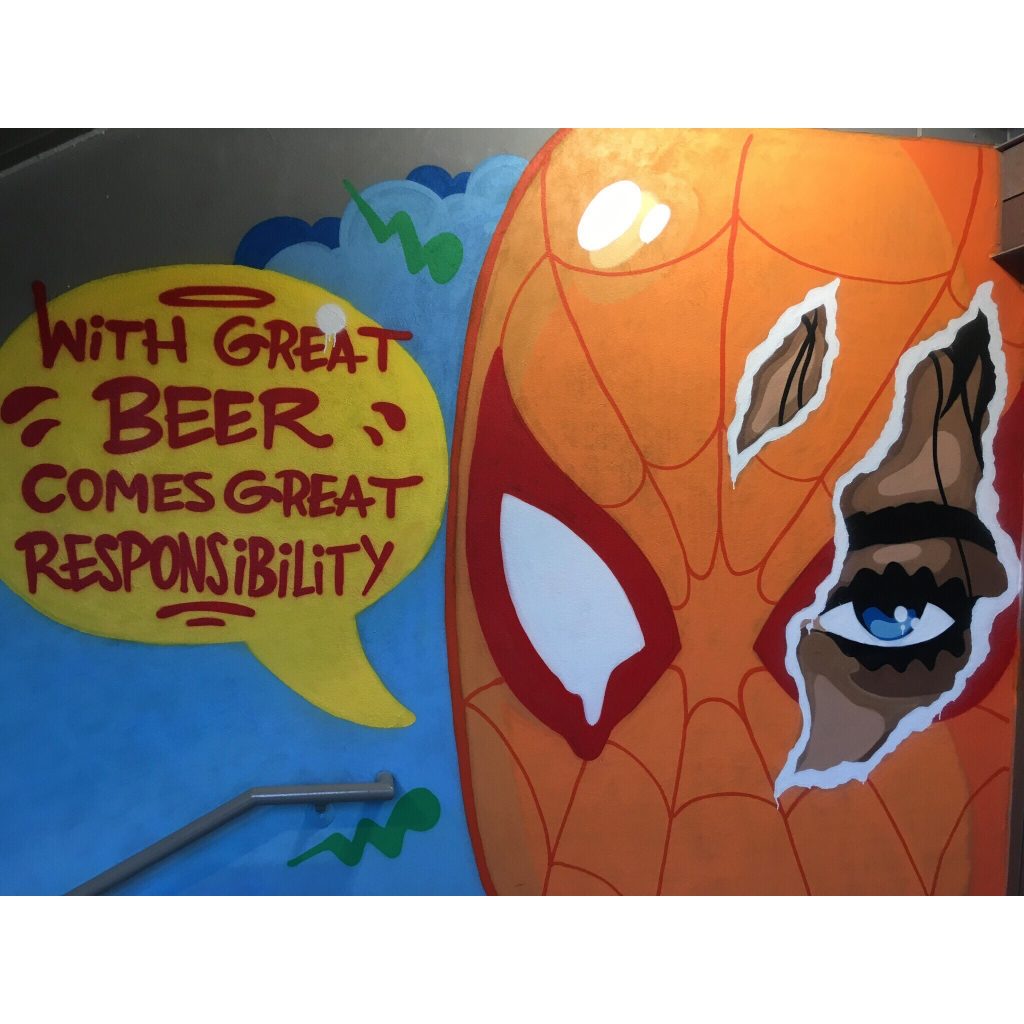 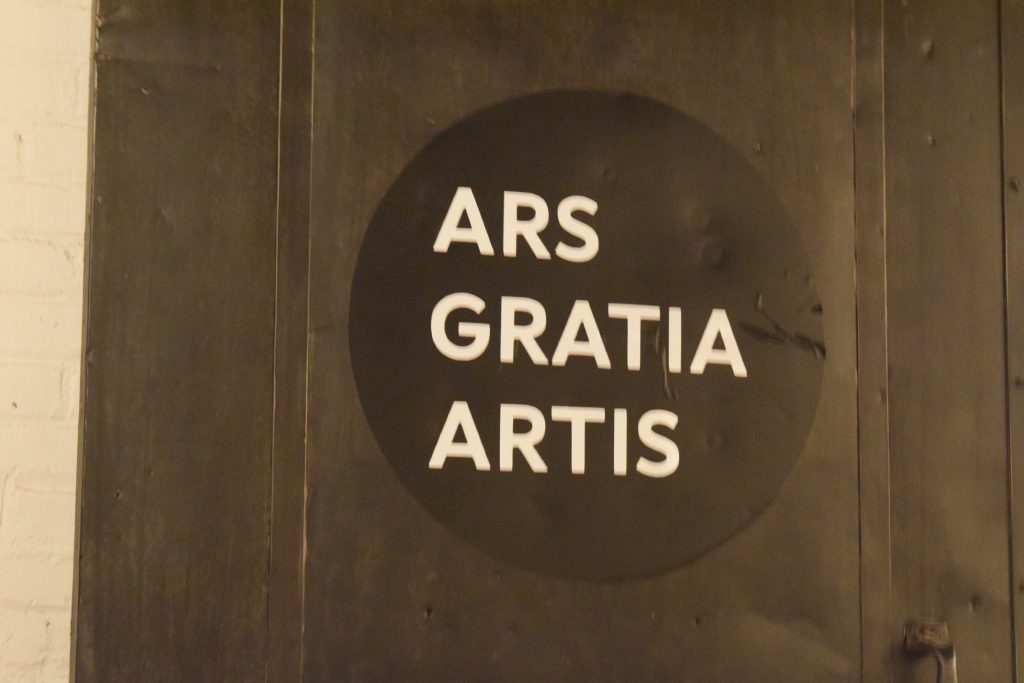 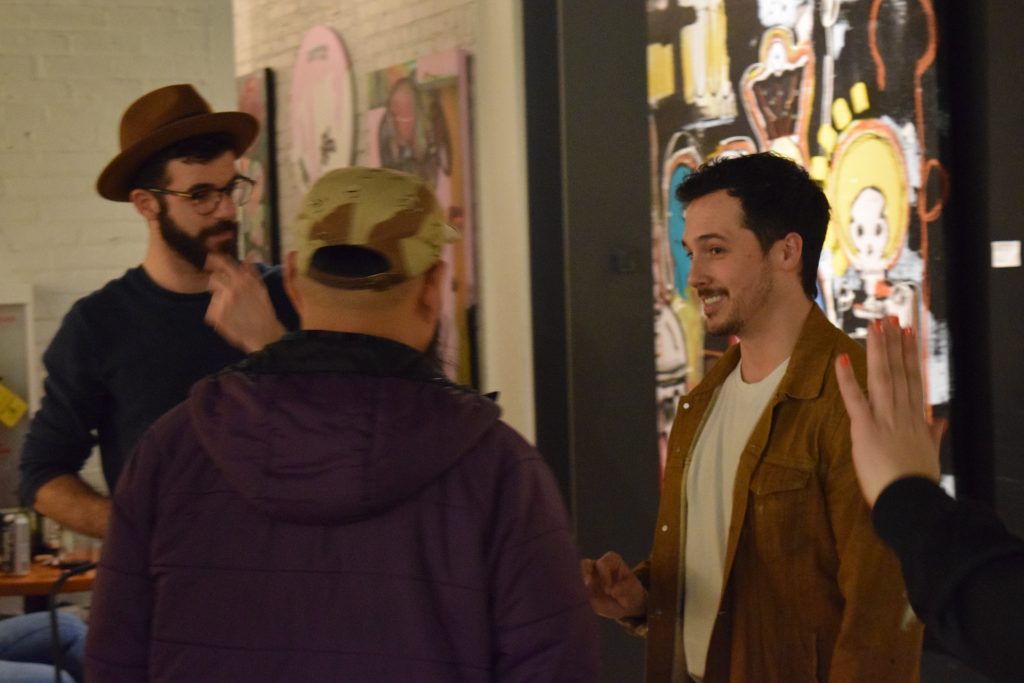 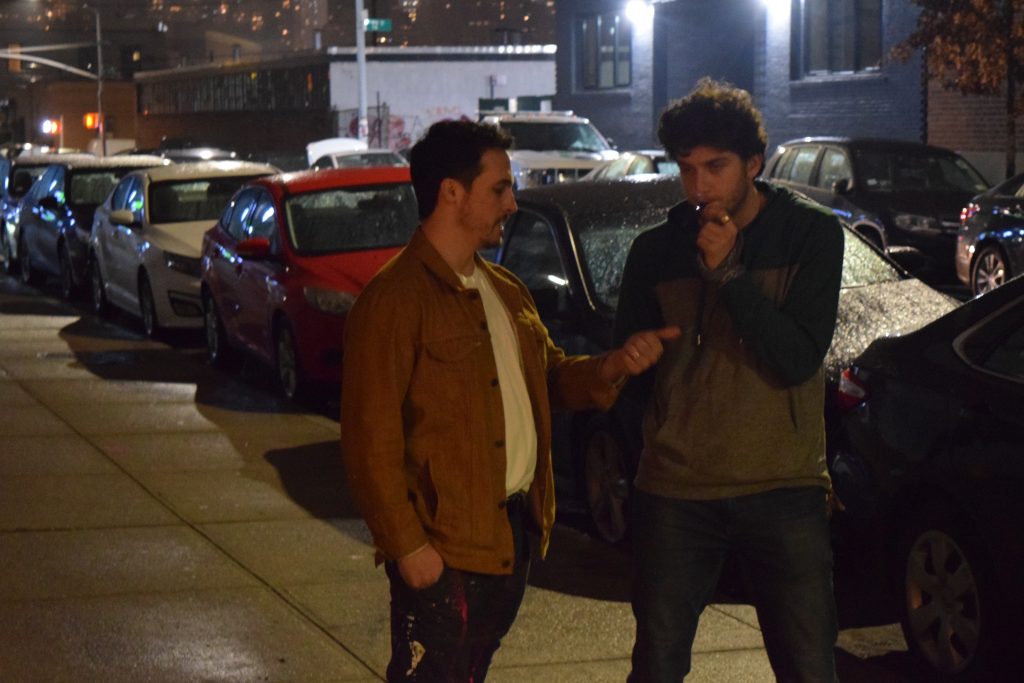 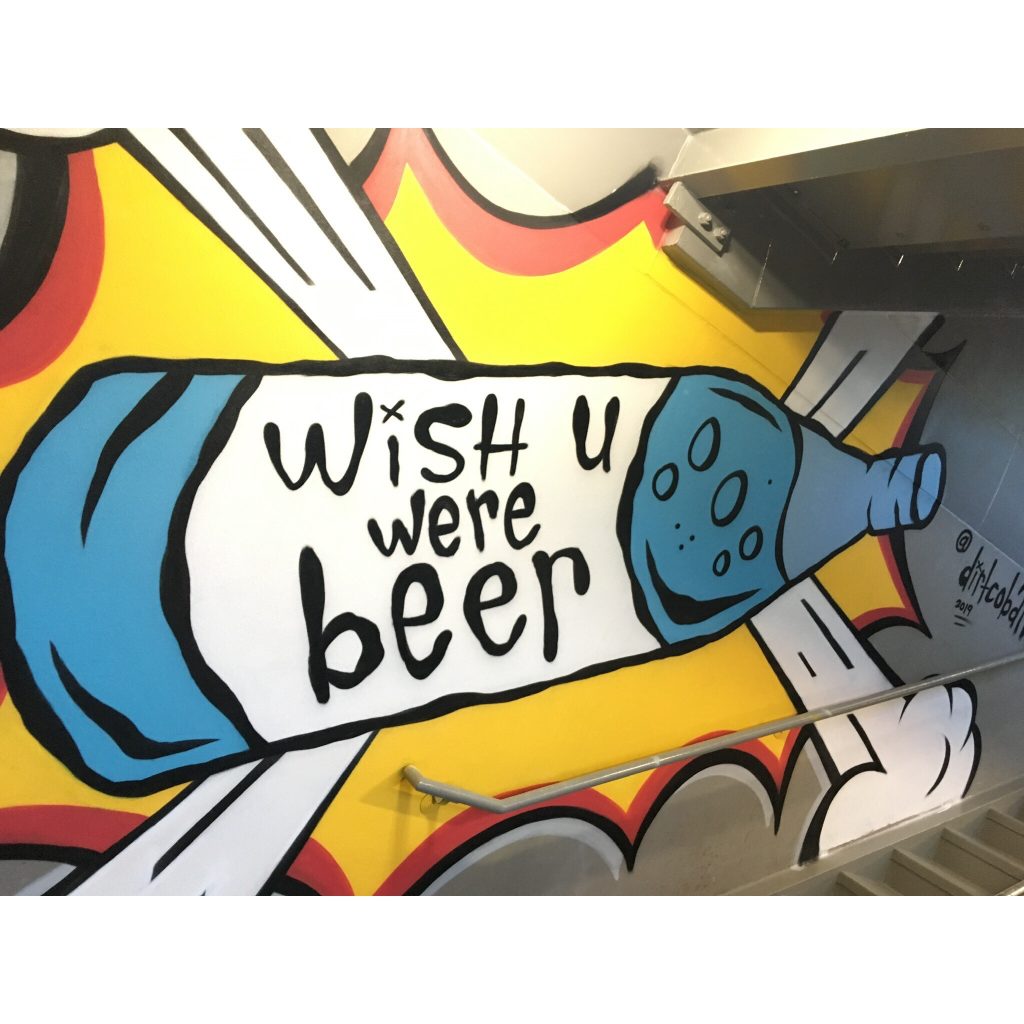 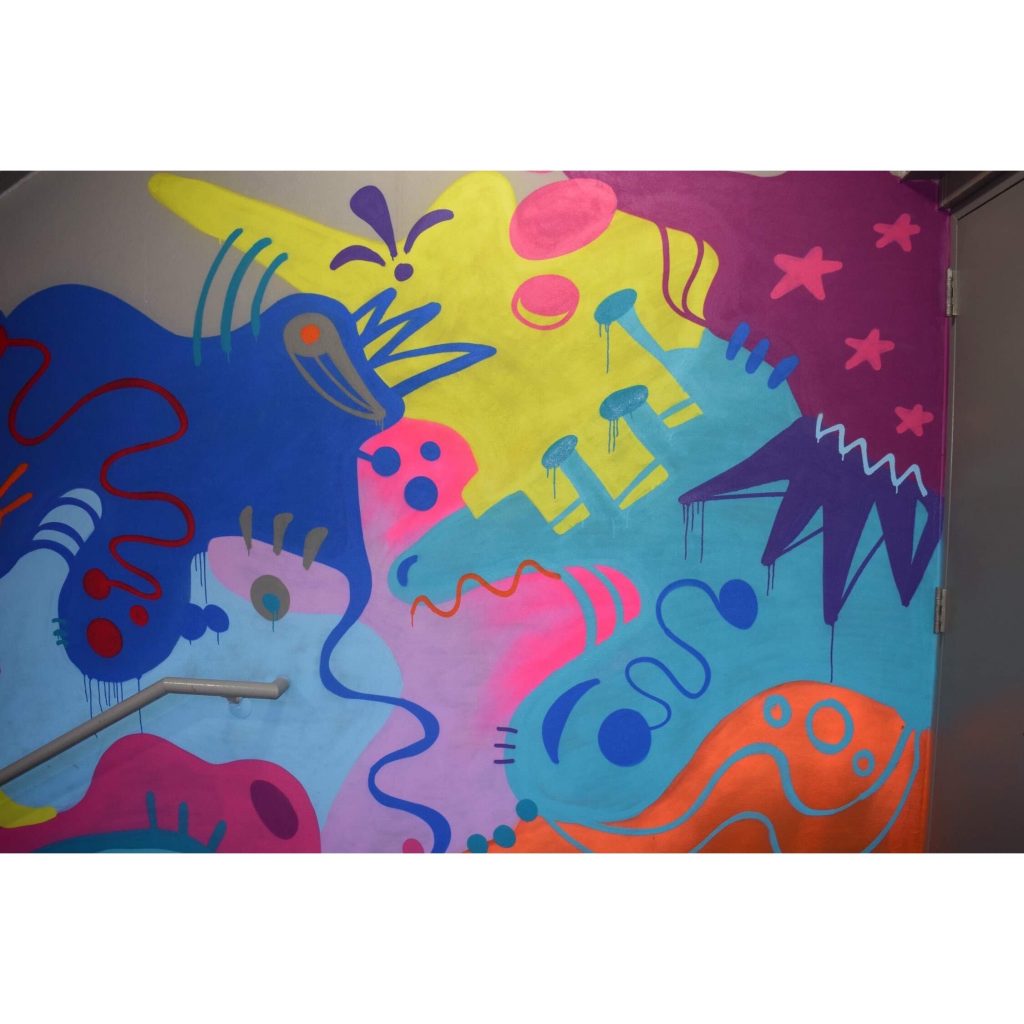 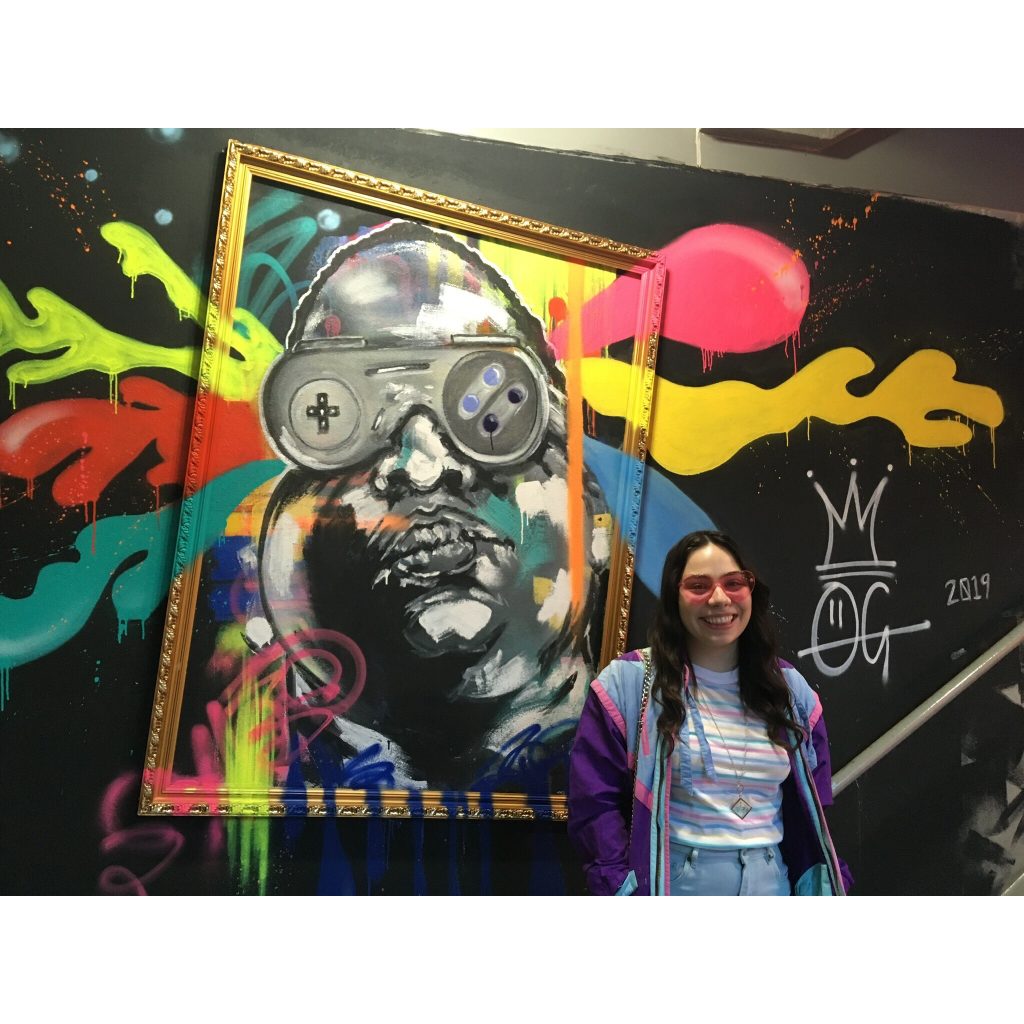 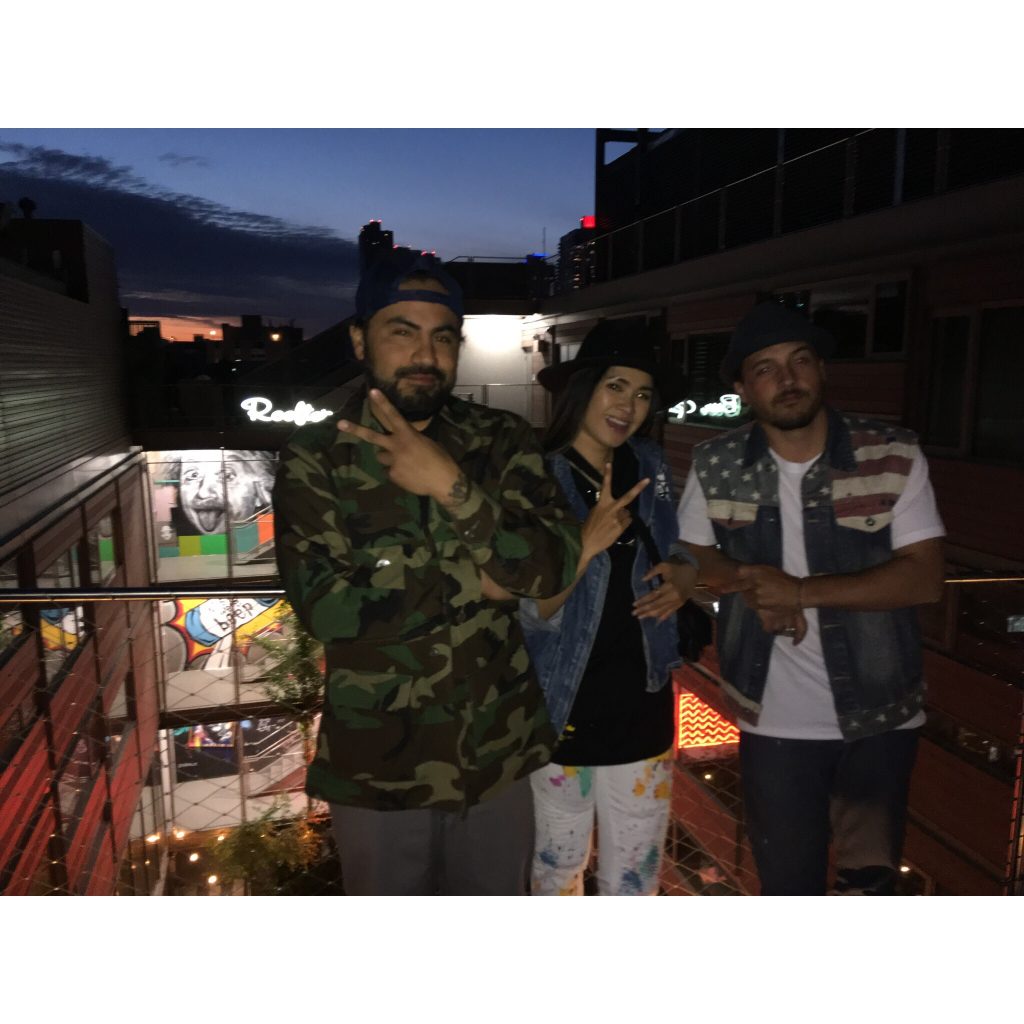 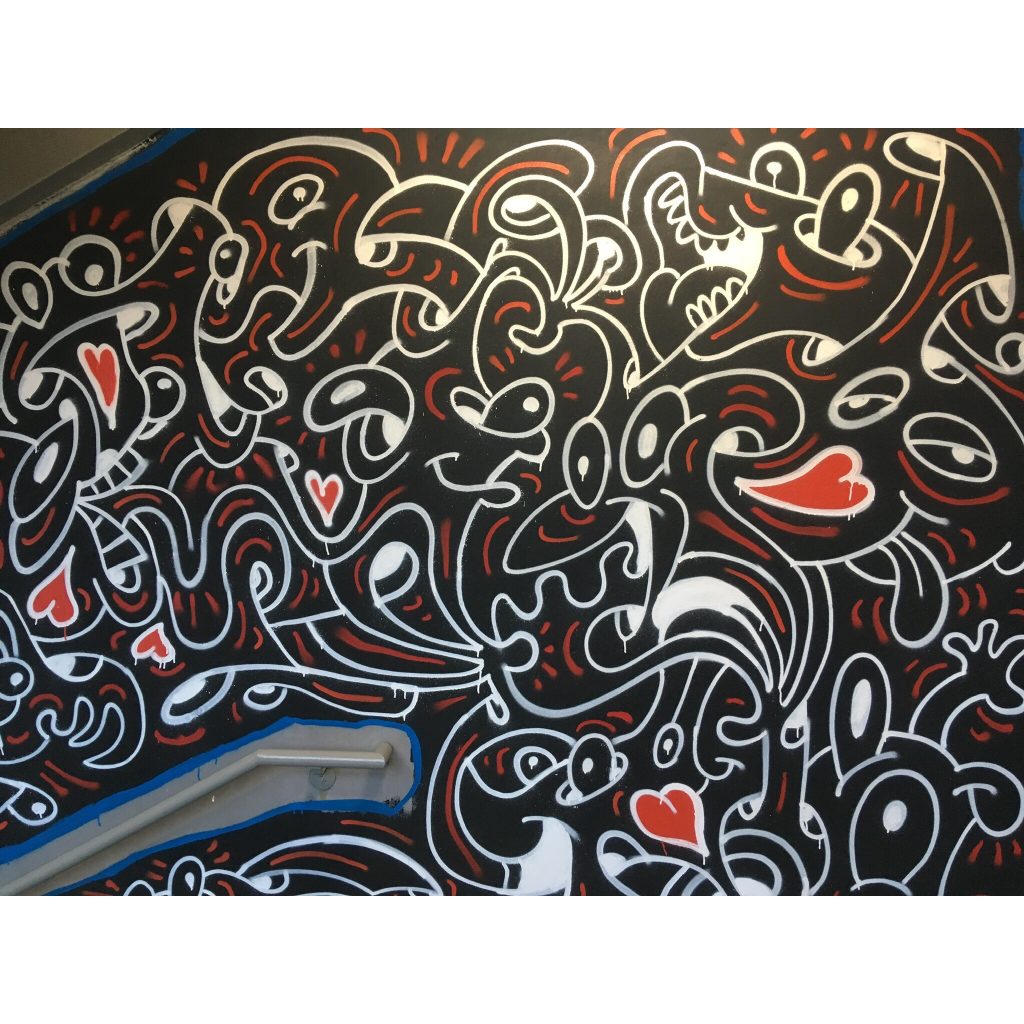