Early Riser creates her lively, colorful paintings in a studio she suspects is someone in the mafia owns. It’s an inconspicuous building on the far western end of Harlem’s winding 125th street, between Broadway and Amsterdam. To the west, the 1 train rumbles over wrought iron elevated tracks and the gray-green Hudson River divides the city from the Lego-like condos in North Jersey on the other side. To the east are 125th Street’s more commercial blocks where big-box Marshalls, AMC, and Rainbow stores loom over the vendor-crowded sidewalks and the air has a heavy smell of incense. We’ve all heard the story of the wide-eyed artist who comes to the bustling artistic metropolis of New York to chase their creative dreams. But that’s not my story, and it isn’t Early’s either.

Early Riser, born Lauren Elzbi, grew up on the outer edges of Queens in a Spanish-Polish Catholic family. Her street art moniker comes from a nickname she got in school in the ‘90s because, she remembers: “If something was due the next day, I wouldn’t stay up all night to do it, since I don’t do that. I’d go to bed at 9 and wake up at 2.” She remembers the New York of the old Pearl River Mart on Canal Street with its kitschy waterfall display and endless supply of ceramic tchotchkes, and Canal Jeans, which sold “everything, not just jeans.” It’s a New York that I grew up just on the edge of, having been born just a year before 9/11, but Elzbi and I share a unique perspective as those born in the city everyone else in the industry flocks towards.

And it wasn’t New York that got Elzbi interested in murals. “I was living in Minneapolis, and I saw a life-sized mural of Prince on the wall outside the supermarket,” she said. “I liked the idea with muraling that you could take as much time as you wanted on something.” She holds a degree in printmaking and explained that she still sees herself as “predominantly a printmaker.” Her process is authentic to that part of her artistic training: “A lot of my paintings contain a hundred or more layers. There’s very little freehand, just you put masks over masks and transparent colors. I like it because it gives you a lot directionality.” This directionality is apparent in the heavy linework of her wheatpastes. Though there’s a fluidity to her art, it has a stark, purposeful quality to it. “When I started doing the wheatpastes, it became apparent that you could also use it for promotional purposes,” she recalled. 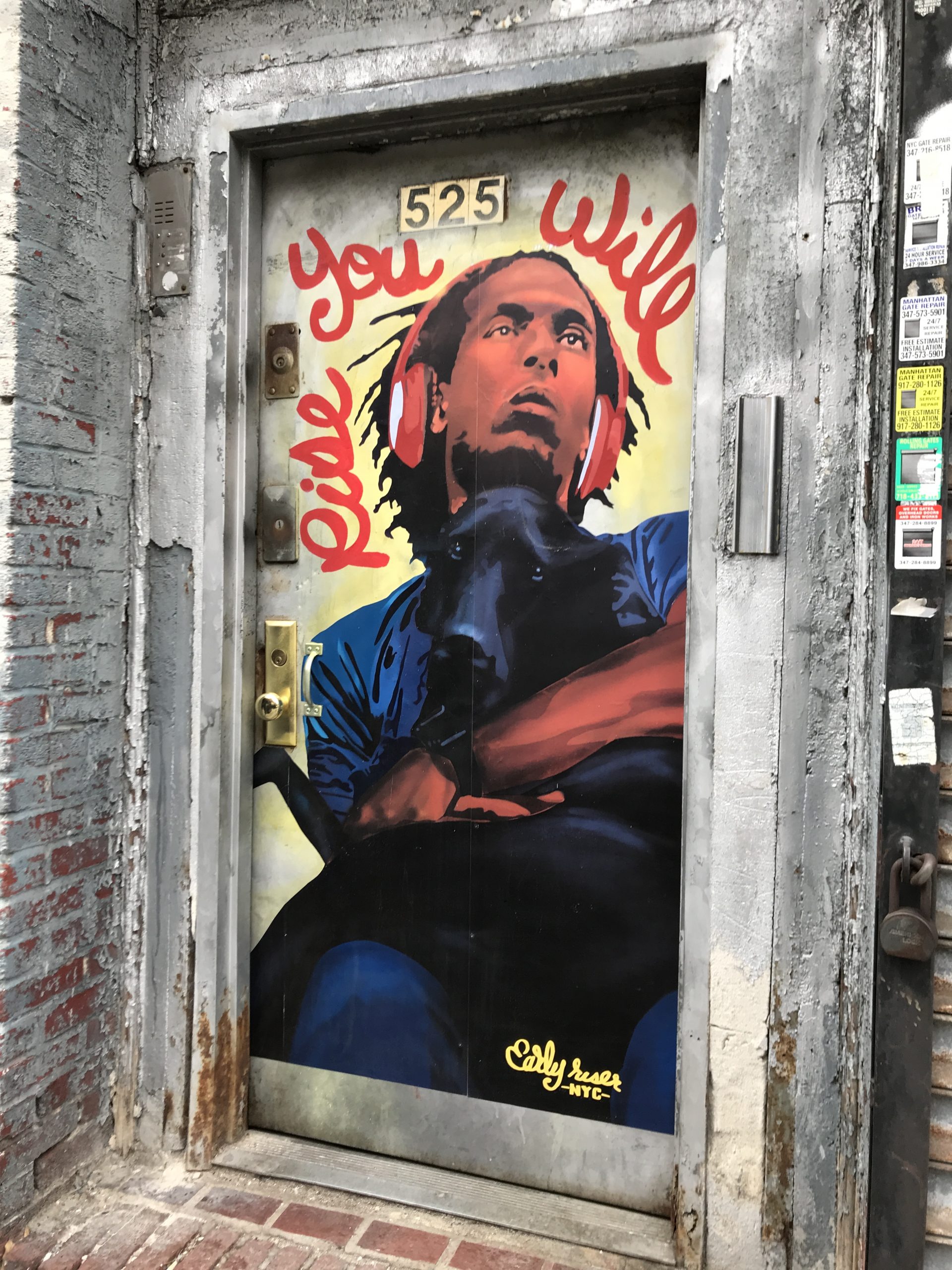 “A lot of my paintings contain a hundred or more layers. There’s very little freehand, just you put masks over masks and transparent colors. I like it because it gives you a lot directionality.”

What makes Elzbi’s art stand out is her use of color. The biggest challenge of any work of art, visual or otherwise, is to connect the artist’s inner vision from their own mind with the perspective the mind of the viewer brings. It’s a delicate game of subjectivity. But more than any other artist, Elzbi conveys how she sees the world with the color landscape of her work. Her work has a strong, clear, vivid voice. Her self-assuredness and no-bullshit attitude come across in the orange, pink, and red shading she adorns her work with.

Her paintings mix boldness and starkness of solid colors with serenity and control in the fluid brushstrokes and shapes. “I use color to tell a story, and the form is secondary,” she explained. “I’m interested in the beauty of mass production of pop art, but that’s not what I’m trying to do in my own art.” In her style which is so governed by blocks of color, negative space is of equal importance to her as positive space. “People will apply all these barnacles of stickers,” she said. “It clutters up the negative space.” Because her wheatpastes are often much larger than others’, they require more breathing room on the walls. 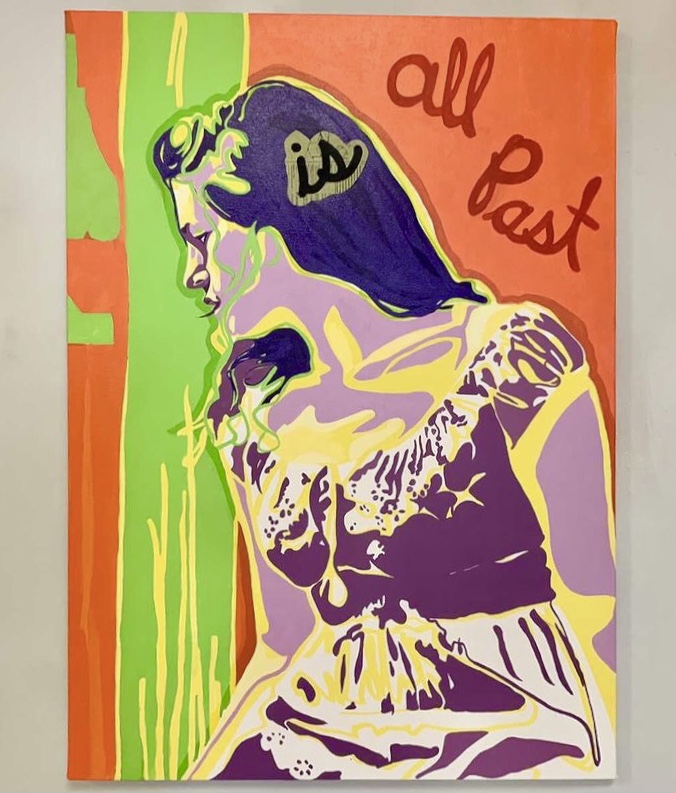 Although Elzbi isn’t always drawn towards the human form, she has a unique knack for creating arresting expressions. On one wall of her studio sits a headshot painting of a model with piercing blue eyes and dark hair twisted in two braids. The painting, which uses yoga instructor Nicole Sheehan as a model, has a Mona Lisa-like effect where her eyes follow you as you move throughout the space.

Another woman watches from a separate canvas, this time an upper-body portrait of a brunette wearing a pale blue jacket. That particular work was inspired by Eve Lindley, an actress and model known for her work in Dispatches from Elsewhere. “I saw her image on Instagram and asked her if I could use it for a painting. I really liked the strength and the resilience of it,” Elzbi explained. She then paid Lindley to come in for a photography session and the arresting blue-coated woman was born. The above painting, Eve, is also of Lindley and was featured in the show Pieces: Messages In Street Art at West Orange Arts Center.

One of her most well-known works is her portrait of an Instagram-famous dog who uses a canine wheelchair. Since painting Oscar, she branched out into other dogs who live with mobility issues. “I don’t just want to be known as the lady who paints dogs. Now if I don’t paint a dog and I post it on Instagram, people don’t like it,” she said. Throughout the summer of 2021, Elzbi picked up a pet portrait business, which she still maintains. “I have way more work than I could possibly do, and I’m always months behind, so I’m thankful for that.” 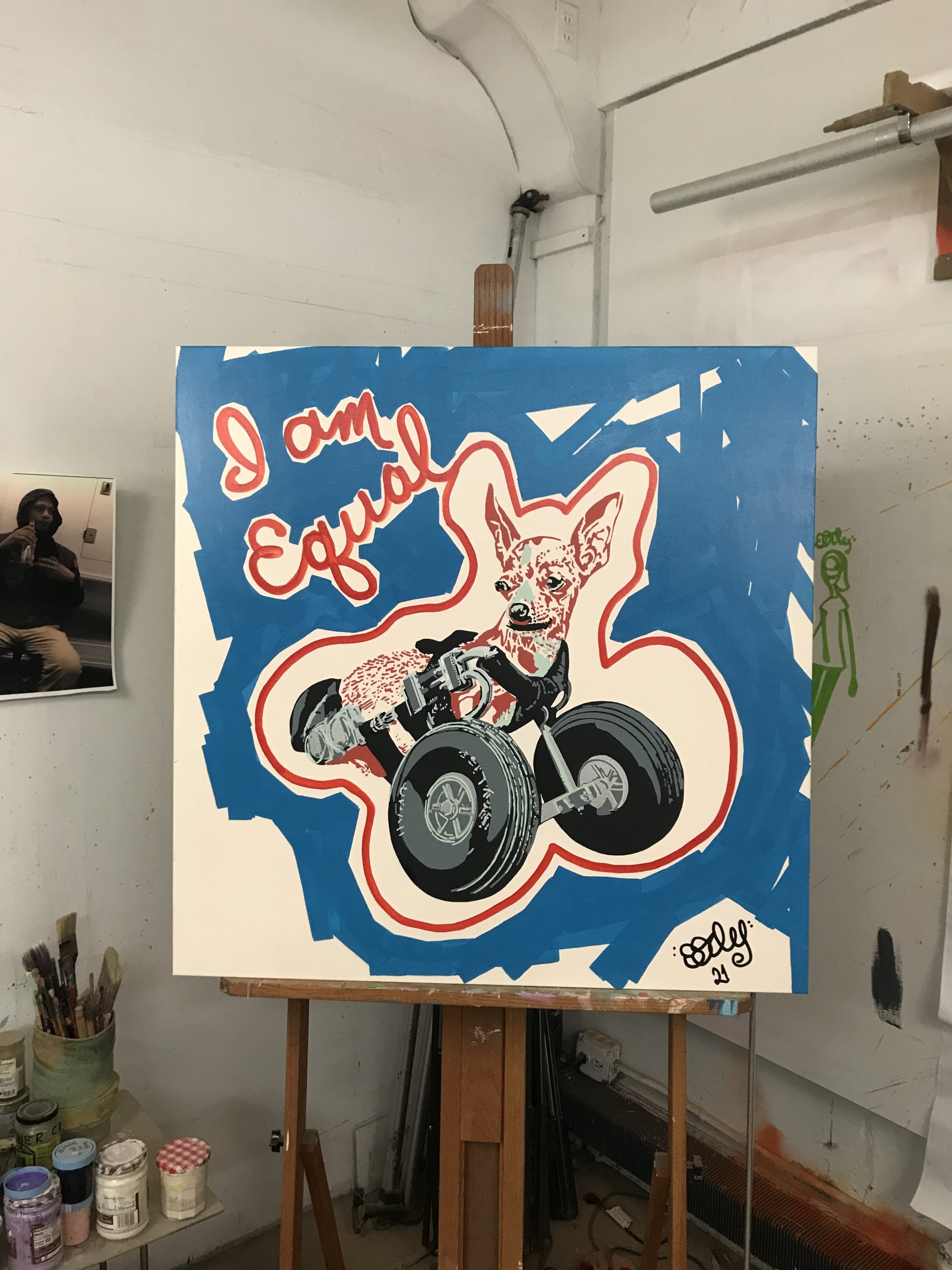 But my first exposure to Elzbi’s art was certainly not through the sweet and heartwarming dog paintings. I first wrote about her work during the production of her thought-provoking mural “The Murder of George Floyd” at First Street Green on the Lower East Side. The painting portrays a gloating Donald Trump guiding a faceless Derek Chauvin’s hands as he kneels on top of George Floyd’s chest. A canvas version of it sits in her studio among her many other paintings, and to look at it again it’s just as bone-chilling as the first time I saw it.

What struck me seeing it in a new context was Elzbi’s depiction of Trump’s face, just as striking as her paintings of Eve Lindley or Nicole Sheehan but much more disturbing. Chauvin’s face is an obscured fractal of peach and brown, but Trump’s is painted with sharp, deep craters and wrinkles. His eyes are downturned in a mask of what appears to be concentration. What Elzbi told me about the piece originally was that she wanted to get across the serenity and nonchalance cruel people commit violent acts with. It comes through with absolute clarity.  These days, it’s hard to see graffiti or “street art” as being as revolutionary as it once was in a world that’s commercialized it so much. “The Murder of George Floyd” is charged with a political fire that’s rare in the contemporary art scene. 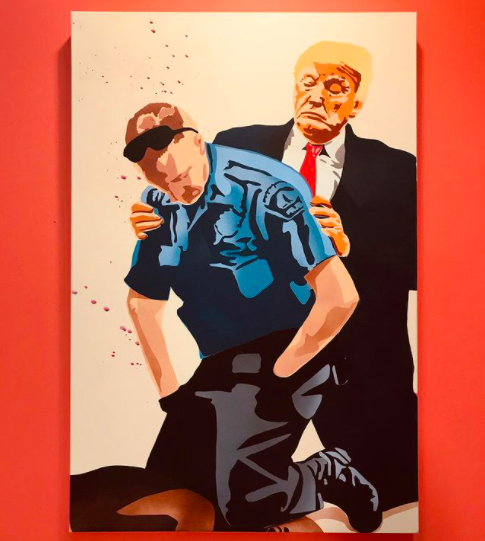 What Elzbi told me about the piece originally was that she wanted to get across the serenity and nonchalance cruel people commit violent acts with. It comes through with absolute clarity.

In muraling and wheatpasting, the artists at the forefront of preserving its authenticity in a market that wants to commodify it into Hypebeast posts or Uniqulo t-shirts have largely been women painters with iconographic styles and subversive messages. Alongside Early Riser, Eye Sticker, IndividualActivist, and Konstance Patton come to mind as street artists who embody the mantra of “do no harm but take no shit.” The cultural presence of contemporary street art has ended up embodied through the minimalist masculinity of brands like Bape or KITH and swaggering big-name male artists like Hektad, or associated with the overt macho of ‘70s and ‘80s graffiti culture. But, as with many art movements, women are doing some of the bravest work.

Elzbi isn’t afraid to speak truth to power, and her combination of chutzpah, grit, and compassion come through in her art. It’s a quality I’ve always associated with growing up in New York—being tough and fearless but holding those you love close to your heart. Though the SoHo she did her first wheatpastes in has become overpopulated by designer stores, she still cites West SoHo around Sullivan Street as her favorite place to paint. But, she said, “Once you get over past Broadway I just get really annoyed, and there’s just too much street art there to compete with,” and describes the East Village and Brooklyn as “oversaturated.” I’ve often gotten flack for my dislike of Bushwick, and Elzbi agreed with me: “I think people in Brooklyn are immune to art because they think they’re too hip, they think ‘Oh, I live in Brooklyn, I’m in Bushwick, I deserve to be surrounded by art and I just expect art to be there,’ instead of finding a little hidden gem.” 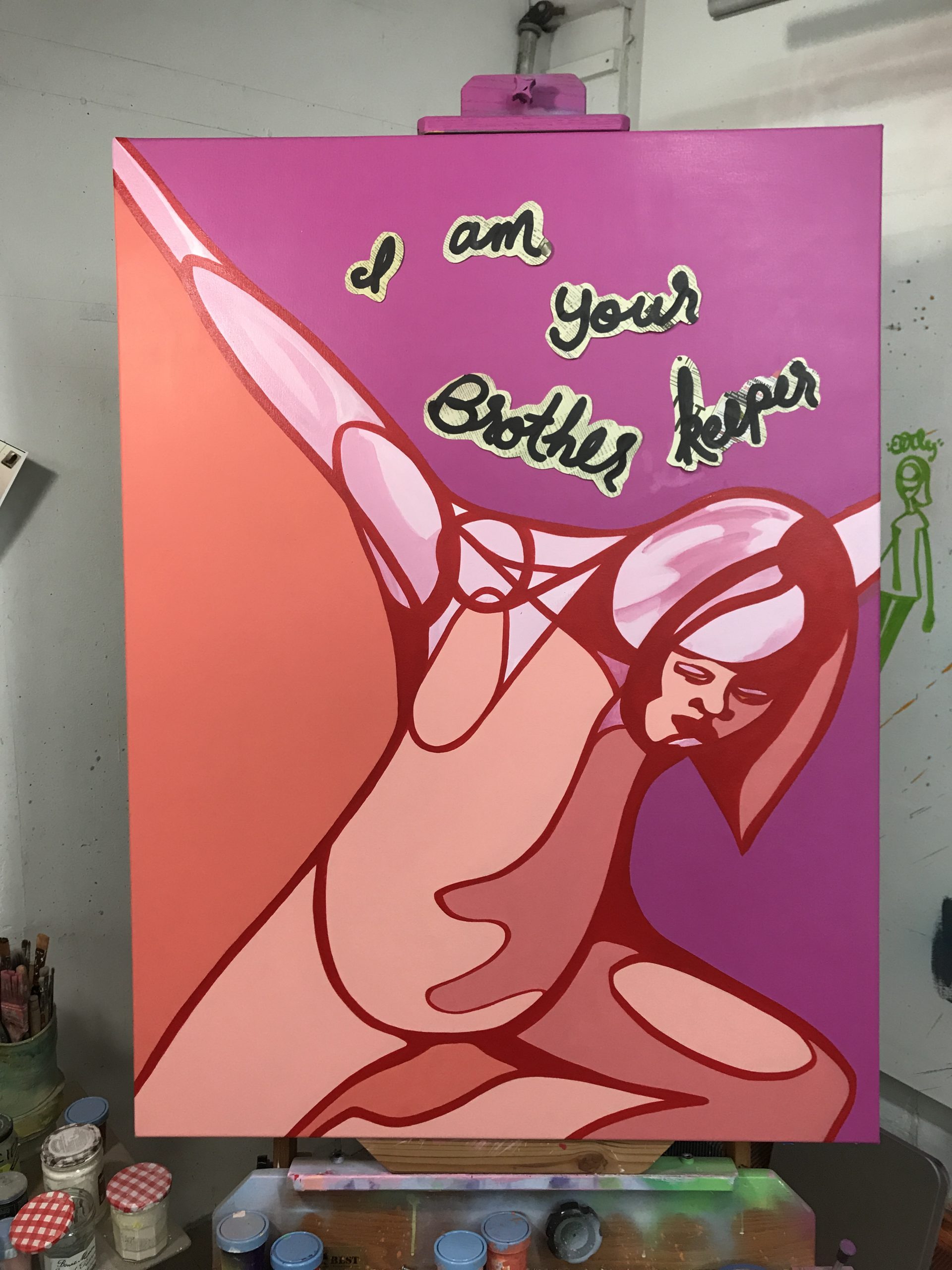 “I think people in Brooklyn are immune to art because they think they’re too hip, they think ‘Oh, I live in Brooklyn, I’m in Bushwick, I deserve to be surrounded by art and I just expect art to be there,’ instead of finding a little hidden gem.”

Early Riser is currently working on a collaboration with the Freeman Alley Hotel where her artwork will be the focal point of a suite in the building. Her artwork is available for purchase on her website and viewable on her Instagram. On top of her studio on 125th Street, a mural of a large black-and-yellow dog with the text HARLEM beside it looks out into the Frederick Douglass Houses across the street. It’s easy to imagine someone seeing it out their window, Elzbi’s striking, bold art a beacon that both stands out in the New York streets and fits into them perfectly. 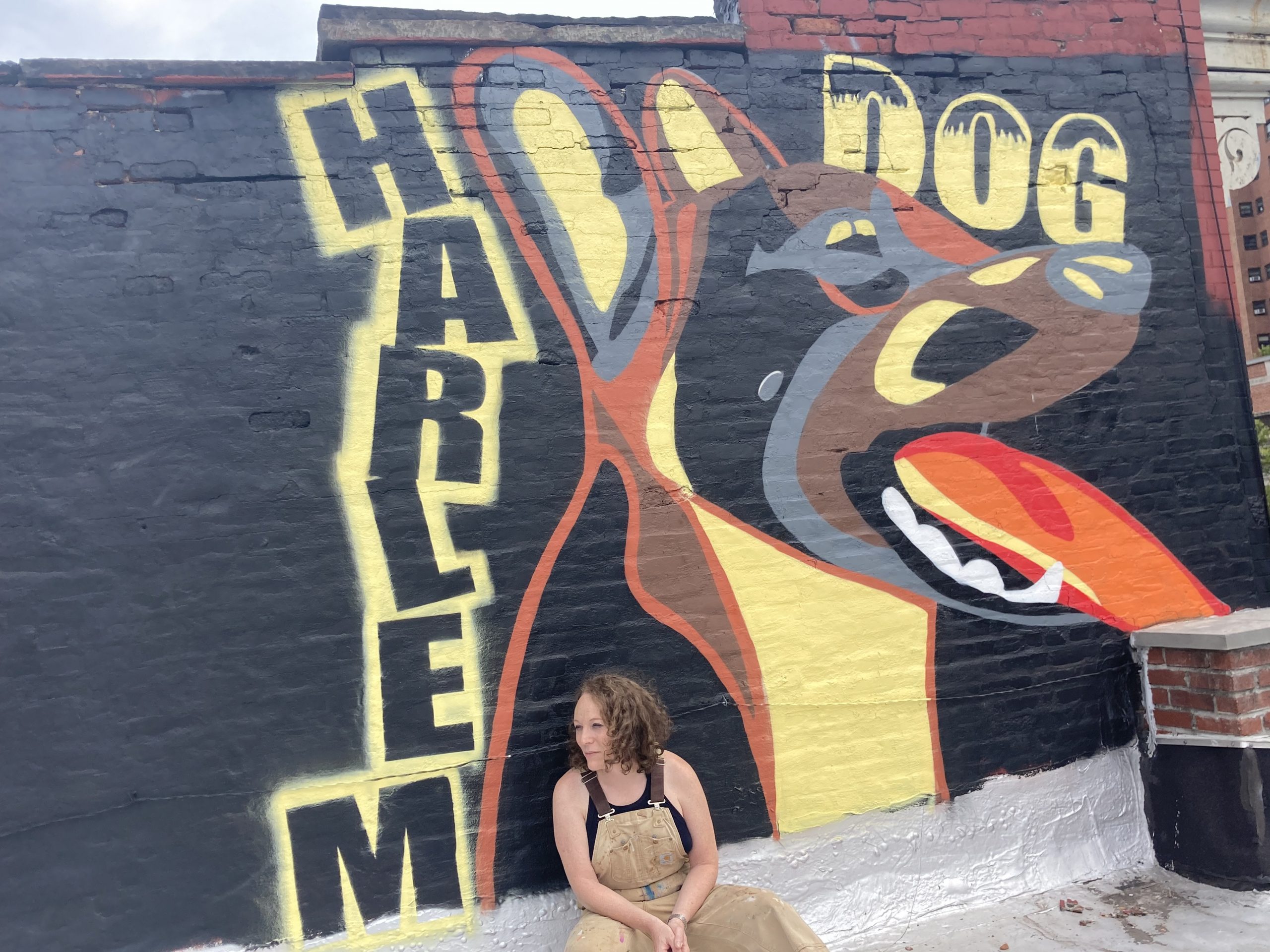