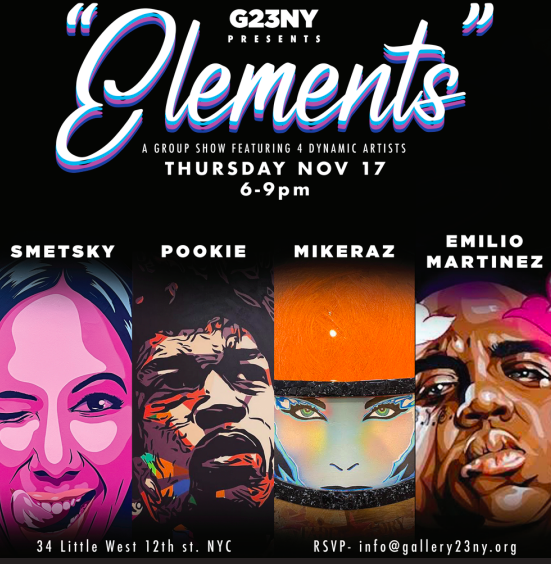 G23NY presents ELEMENTS, a group show that focuses on the new works of four artists and their unique set of skills that work complementary to one another.

Smetsky is a Russian-born, New York-based street/pop/graffiti artist who focuses on bright color theory, pop icons, and a crisp execution of his subject matter. He is best known for his bright color usage in a playful manner with a deeper picture in mind. Originally known for his cartoon characters, Smetsky has more recently taken his direction more into portraits and inanimate objects. His many accomplishments scale from selling out full series, completing large-scale murals, sculptures, and commercial installations. You can find his pink Skull sticker “Smetty” all over the city streets. During the last year, he and his long-term friend Mike Raz have collaborated to do the famous Bowery “Fuck War” mural which showcases a giant peace sign with two wings. Originally they were the colors of Rusian and Ukranian flags, but were then later painted over white.

Mike Raz is a Ukranian-born, New York City-based pop/graffiti artist. You can see his famous ”Space Girl” stickers and wheat-paste all over the city. His graffiti background gives him a raw edge and style that showcases multiple layers of different techniques and mediums. His newer style and collection focuses less on colors and more on subjects and the use of materials. His black and white series takes his skills to a whole new level with the fun use of texture as well as glass and resin. You can also find his stickers all over New York. His iconic “Space Girl” demands attention when seen. Raz was the other half of the “Fuck War” mural on Bowery.

Emilio Martinez is new on the scene, but has already been the topic of conversation on the scene. His use of traditional styles mixed with modern topics and themes helps him to be the spotlight at any gathering. His famous paintings of pop icons such as Kobe Bryant, Pablo Escobar, and Notorious BIG were immediate hits and his range of collectors vary from Wall Street to Jay Z himself. Emilio juxtaposes different styles and techniques to create images that come to life with small tales all around them. Any one of his images has a sub-story hidden inside and will demand you to take the time to study it. He’s been working with the legendary Tats Cru, Crash One, and many other legends of the street art game. He has also curated several shows and put together massive events for fans and collectors alike.

Lastly, and certainly not least, Pookie is a force to be reckoned with. She is new to the scene, but has skyrocketed her way to the top with her immaculate art. You can recognize her style with her pop icon topics and flawless execution. Pookie is a triple threat: Her lines are crisp, her colors are harmonious, her topics are bold. Collected by many celebrities from Kevin Hart to Jim Jones and Shaquille O’neal, Pookie has already left her mark on the art scene. Her newer style has adopted a mixed medium approach with resin, glass, and other materials that take her already impressive 2D skills into a 3D realm.

Each of these stunning artists are in high demand and had each planned on a solo show this year. Instead, they decided to join forces with a four-person show to end 2022 in the highest quality possible. Join us on November 17th for a first view of these 4 artists’ newest works at Gallery 23.