It’s no coincidence that brooms look like giant paint brushes. To ‘domestic graffiti’ artist FoodBabySoul, the meditative and generative act of sweeping is critical to the maintenance of her botanical installations in Bushwick, Brooklyn, and to the wellbeing of the entire neighborhood.

Now, to get more people to play an active role in the stewardship of their communities, FoodBabySoul is partnering with self-taught South African artist Sizani Baloyi to gift 40 of his linocut prints to New Yorkers who post videos on social media sweeping litter and debris off their streets.

The aptly titled “Sweepstakes” will run from now until May 1, when the raffle drawing for Baloyi’s prints, which are valued at $100 each, will be held at a community gathering and announced on FoodBabySoul’s Instagram. In order to enter into the raffle to win a linocut print, simply post a sweeping video and tag @FoodBabySoul. The more fun the video is, the better, FoodBabySoul said. 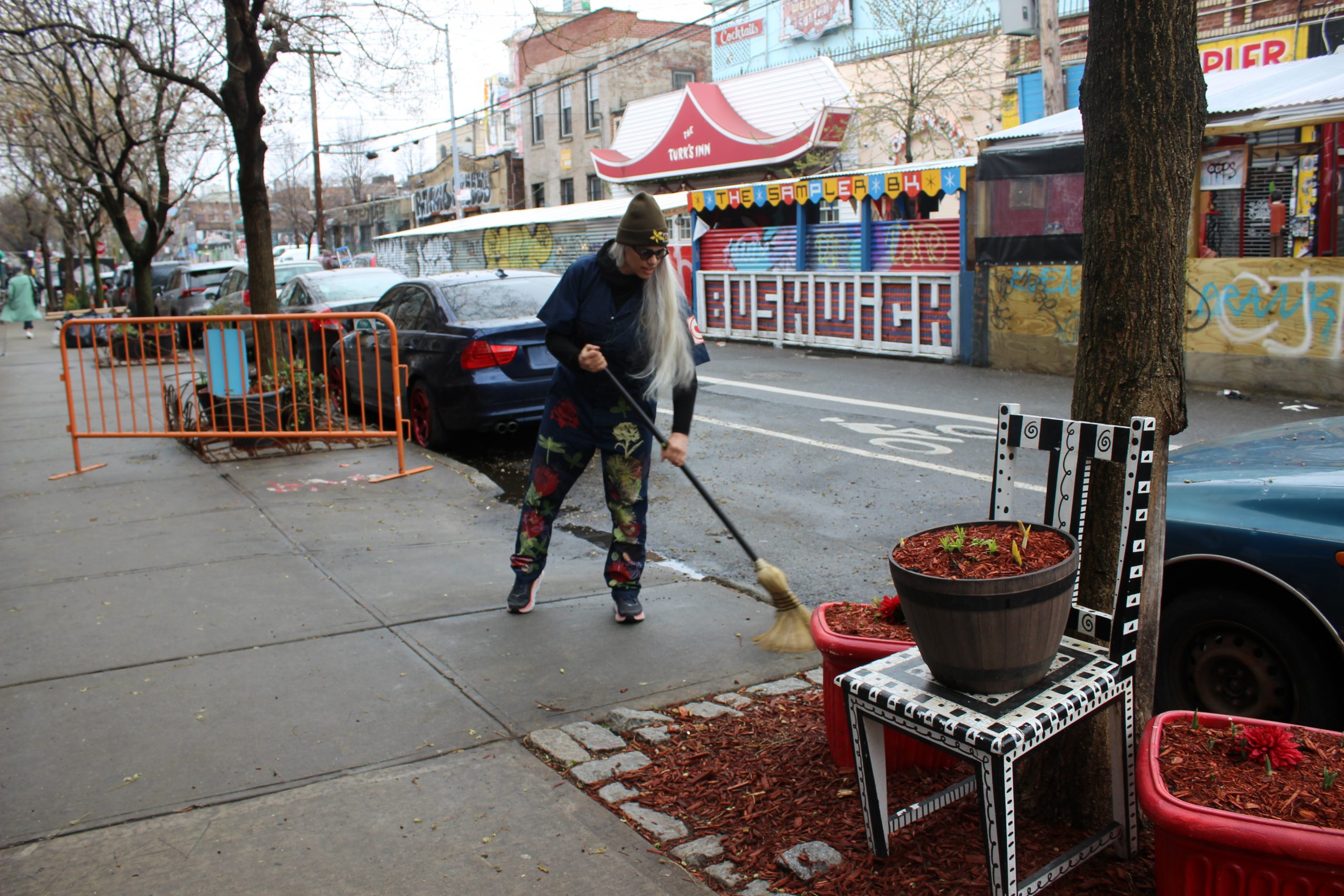 “It turns out that sweeping is my favorite activity,” FoodBabySoul said.

FoodBabySoul can be regularly spotted in her painted coveralls and long grey braids pruning, sweeping and tending to her plant beds and public art installations on Starr Street between Irving and Wyckoff Avenues. This imaginative corridor is the center of Seed Streets Brooklyn, the name of FoodBabySoul’s ever-changing community-centered street art project.

“I hope that people stop looking at sweeping their street as a chore and start treating it like a wellness practice, a meditation or even as a social event. It’s just such a wonderful, positive activity that lends itself to people feeling better. That instant gratification that you’ve cleared the way—sweeping just cleans me out.”

Baloyi, the artist behind the linocut prints, said he spent most of his life living in an informal settlement in Johannesburg, which is where the motif of the brooms in his sculpture and print art come from. The linocuts in this limited series feature unique black-and-white graphics which toy with space and form.

“My work as a whole speaks of life in squatter camps and it speaks on the concept of being able to have a home and bring light into a place that other people perceive as dark, dangerous and not in a good condition,” Baloyi said. That’s where the concept of a broom came from in his art—for Baloyi, it was an agent of dignity and humanity in neglected spaces.

“If you can walk around my community, you’ll see that the most of the people take care of their yards and their sheds. Some of the sheds, when you enter into them, you just get that feeling that it’s a home. So the broom—it is a way of having a clean start and a way of having hope in a place that is perceived as dark or even dangerous.” 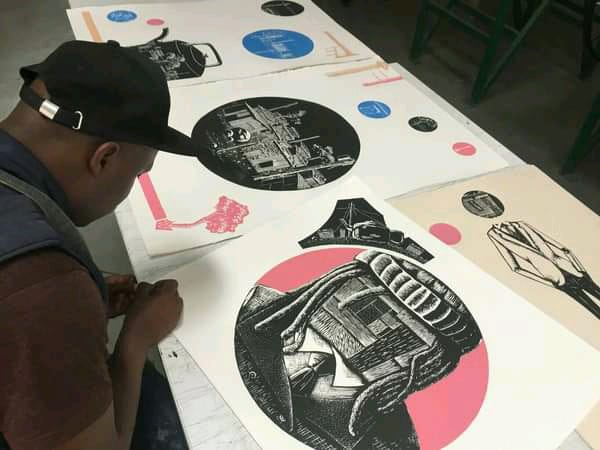 The two artists got connected through social media, when FoodBabySoul bought a piece from Baloyi. The professional relationship grew when Baloyi reached out and commended FoodBabySoul for her work in creating clean, verdant streets in Bushwick. “The broom prints he’s done—they were like dancers, in different positions,” FoodBabySoul said. “The prints were a stunning investigation in space. Sweeping makes you investigate the spaces that are around you, too.”

The goal for the ‘Sweepstakes’ was three-fold, FoodBabySoul said. The first goal was to help get real, limited edition art to people who might not otherwise be able to afford it. The second goal, FoodBabySoul said, was to increase audiences for both Seed Streets Brooklyn and Baloyi himself.

And the third, above all, was to get people to sweep their streets and mitigate the real-life threats that litter causes to community wellbeing.“My fantasy is that this inspires people to make sweeping their neighborhoods a part of their lives, if they can,” Food Baby Soul said. 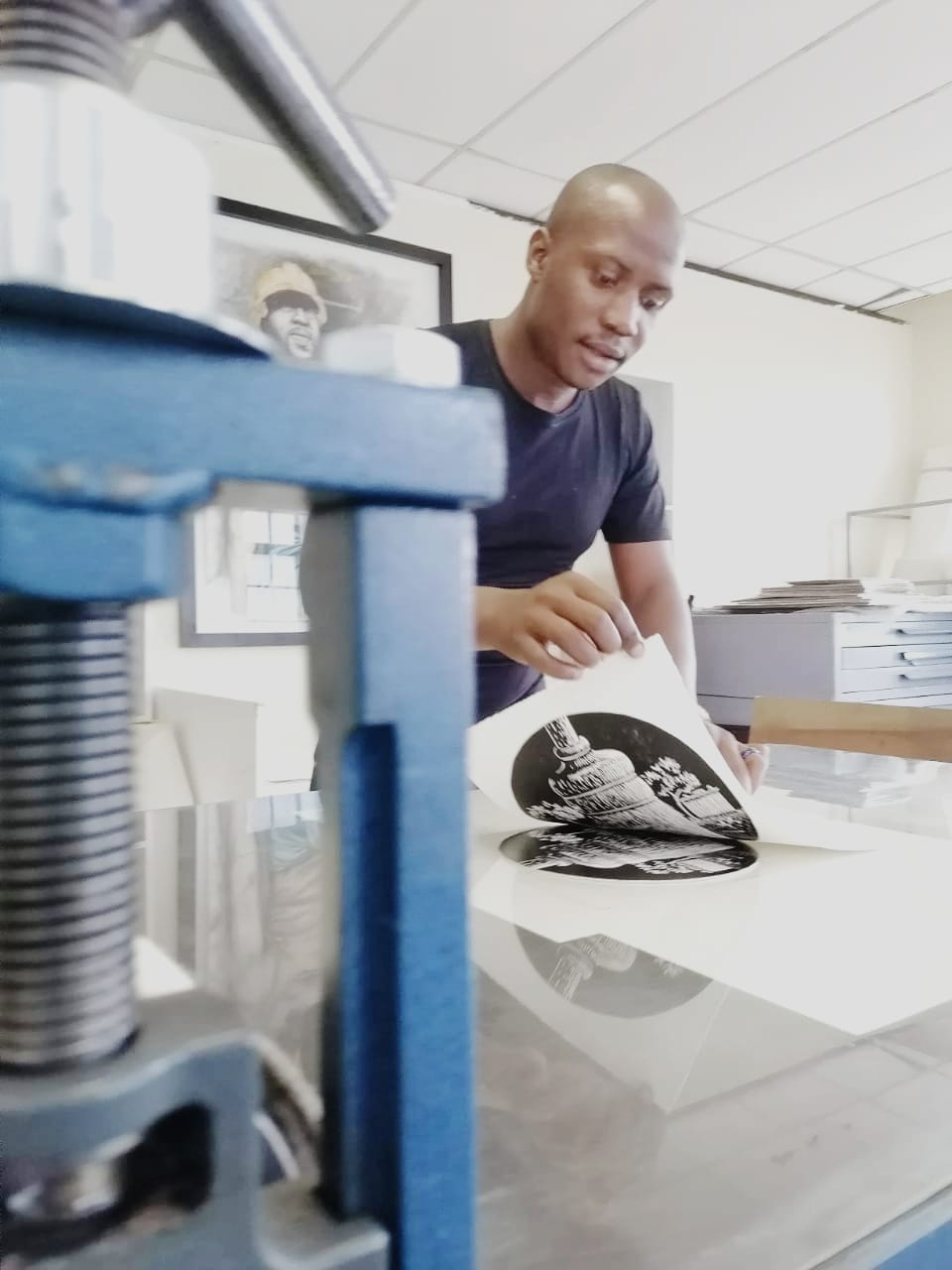 “It’s my hope that the beautiful print, which is just sitting in your kitchen or somewhere in your house, will remind you of the little thing you could do to make your neighborhood a better place.”

At the onset of the pandemic, the NYC Department of Sanitation had its budget cut and low-income neighborhoods became even more litter and rat prone. This January, NYC Mayor Eric Adams proposed to slash the sanitation budget by about 47 million dollars, leaving residents to fend for themselves.

This makes sweeping all the more crucial, FoodBabySoul said. In order to boost visibility for this project, the Sweepstakes will also be posted about on the NYC Department of Sanitation’s social media channels.

Over the nearly two years of Seed Streets Brooklyn, FoodBabySoul has raised over $5,000 to hire local artisans to create tree guards, build a lending library, help her maintain the gardens and more. The project also features her own yarn-bombing art as well as art from street artists like Risa Boogie and Sara Lynne Leo.Ultimately, what keeps FoodBabySoul going, she said, is the commitment to serving people in her community. 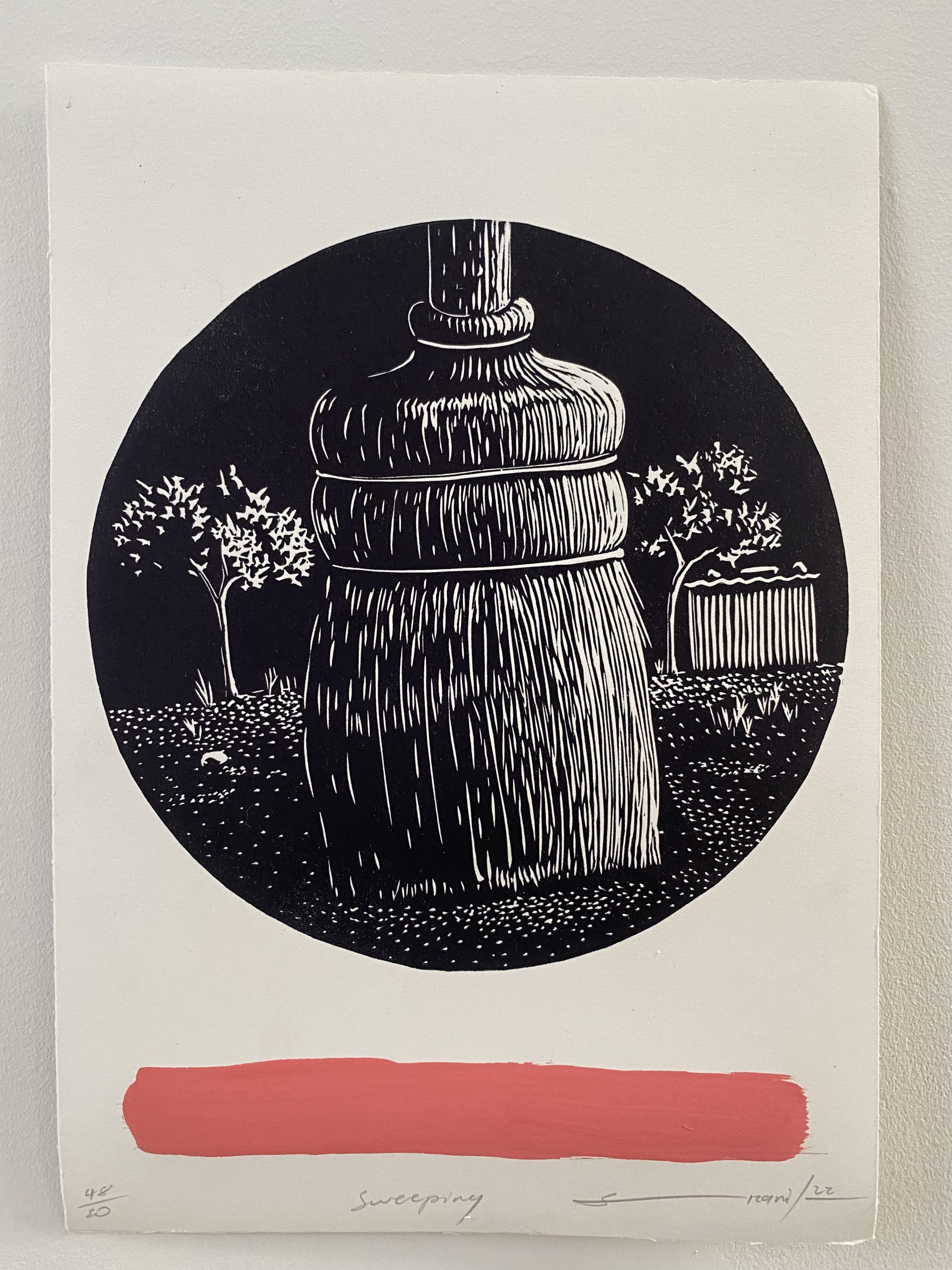 “I’m trying to make it so that you could have real art in your hands,” FoodBabySoul said.

“It’s not just like a thing you can’t afford—you could literarily get a limited edition piece of an up-and-coming African artist just by sweeping. It’s a total win-win.”For more information, check out FoodBabySoul’s Instagram.