Someone outside of the graffiti culture might see all graffiti as the same: a form of vandalism. Graffiti is more complicated than that. There are rules. There is different terminology for different parts of the art.

To help distinguish these different elements, I decided to make a list of the most important graffiti terminology, especially in Chicago, to give more of an understanding about which artists are accomplishing what. This will also help to pinpoint exactly what you see on your everyday journeys in the city.

Someone who practices graffiti.

This is how all graffiti artists start crafting their style. Black books are used to practice tags and sketches. They are often passed around for other artists draw in during writing sessions. Once an artist has mastered their craft in the blackbook, they can move on to practicing in the streets.

A writer’s tag is their signature. It’s what established an artist’s unique mark. They are the simplest form of writing and consist of a line form rather than “bubble” letters. Tags often serve as a basic outline for artists to form more complicated lettering styles. They are the most common form of getting up. Newspaper boxes, poles, street signs, and other street spots are smothered in them all around the city. 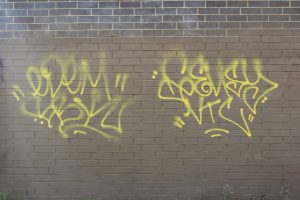 This is the most common graffiti mark you will see on the CTA. This is when an artist engraves their name onto a surface. The most common tools used for this are exacto knives or keys. The next time you take the train or bus, you’re guaranteed to see a scribe on the windows and walls. These are one of my favorite forms of graffiti because the trains hold years of tags that accumulate over time.

These are markers used to write tags which stain the surface they are written on. The stain will remain even when the tag is attempted to be removed.

Fire extinguishers also play a big role in the graffiti world. They are filled with paint and used to paint very large tags on buildings. It is a lot harder than it seems to successfully use this form of painting.

This is usually what writer moves onto after practicing tags. It is a more complicated form of a tag consisting of larger “bubble” letters. Throwies are very common in the streets of Chicago because they are a simple way to get up a large scale mark. They consist of no more than two colors most of the time. You often see them on buildings, billboards, and highways. This is also similar to the term “fill-in” which refers to a throwie that is filled in with a solid color. The term “hollows” refers to the opposite of a fill-in.

A piece is a more complicated form of a throwie. It includes more color and more detail (3D affects, shapes, etc). Pieces take more time and skill to execute and receive more respect from other artists. It takes a lot of practice to get to the point of piecing, which is where black books really come into play.

These pieces are often so complicated in every aspect that they aren’t legible, but not in a bad way. They are aesthetically wild, plain and simple.

Murals are also considered pieces, but what distinguishes them is that they are often commissioned by the city or local businesses. You must have an immense amount of skill to get to the level of muraling.

A toy is someone who practices graffiti in the streets, but has not practiced to the level of getting up to that point. They often write tags everywhere and very few pieces. Their pieces are often not well-done in form which is why they recieve major criticism in the graffiti world and they often get tagged over.

Stamping over someone’s work is a form of communicating beef with another artist. Stamps are very clear because you can often see parts of the rival’s art under the new piece.

City Kurupt is a journalist pursuing a BA in Studio Art and minor in Journalism. She was born and raised in Chicago and focuses on the underground graffiti scene spanning throughout the city. Through artist interviews, photojournalism, and documentary film, she aims to fight stigmas and discuss controversies surrounding graffiti culture using an ethnographic approach.