Though Pittsburgh-based multimedia painter Grant Catton recently completed a wildly successful show, the world of his work stretches far beyond gallery walls. When I first met Catton this past fall, we connected over a shared affinity for coffee and love-hate relationship with Café Bustelo. I initially saw his work for sale as postcards at Arriviste, a low-tech, minimalist café on Ellsworth Avenue, a chique shopping thoroughfare in Pittsburgh’s Shadyside neighborhood. The wonderful garishness of his color palette and the frank willingness he had to treat consumerism and money not as enemies but as another part of life to be inspired by immediately drew me into his art. I took home one of his prints which features a Bustelo label and a map of Allegheny County obscured by bold brush strokes and cryptic handwriting. 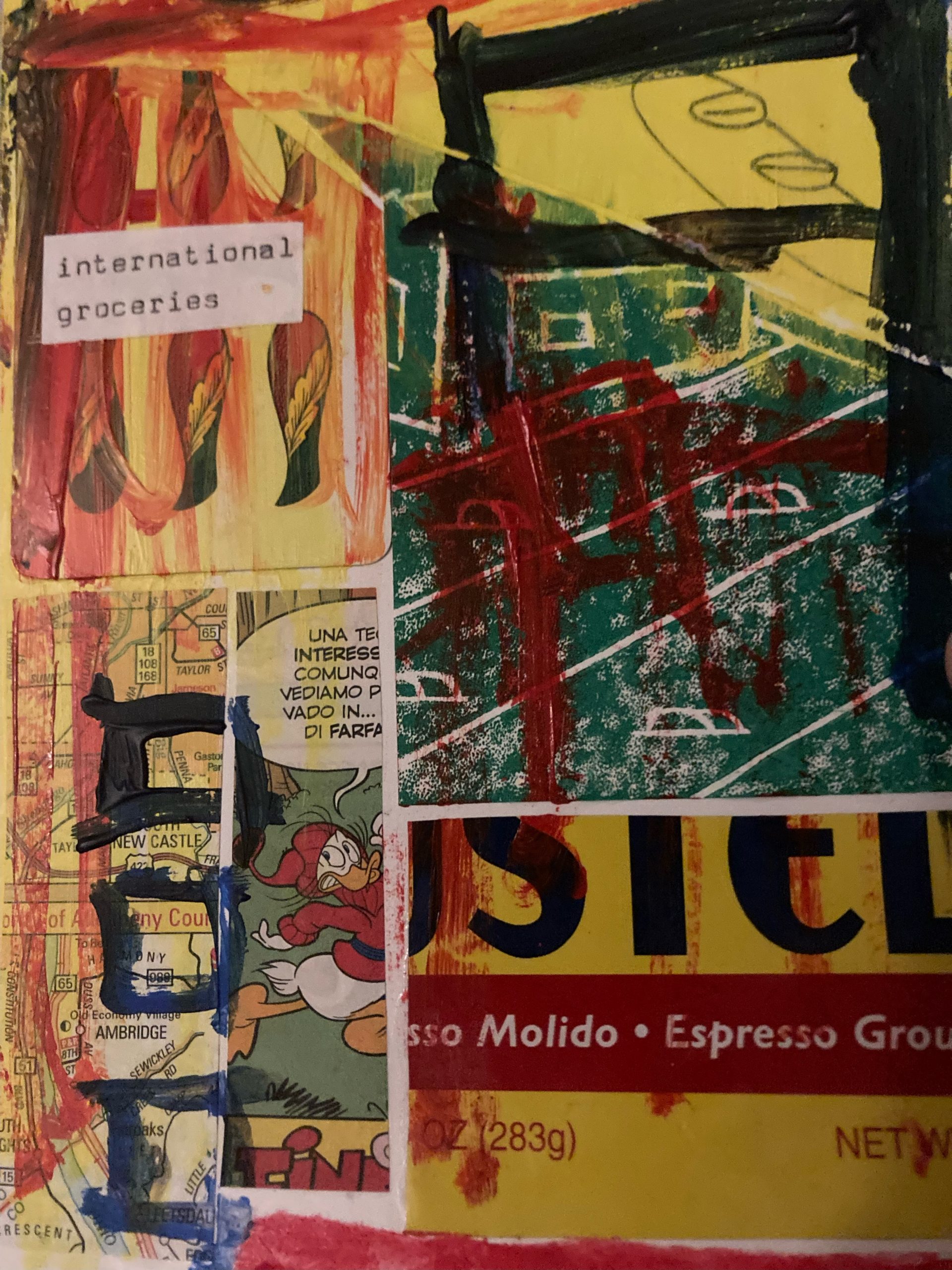 Catton’s journey with art is, fittingly, tied into coffee. One of his earliest works was Caffé, a depiction of a Bialetti moka pot, which his uncle asked for an extra print of at the peak of the pandemic. “There was one print I made that I really didn’t like,” he explained to me as we sat down for an interview in the half-light of his living room, surrounded by enormous canvasses. “I just scribbled over it, and I realized that I had way more fun doing that.” 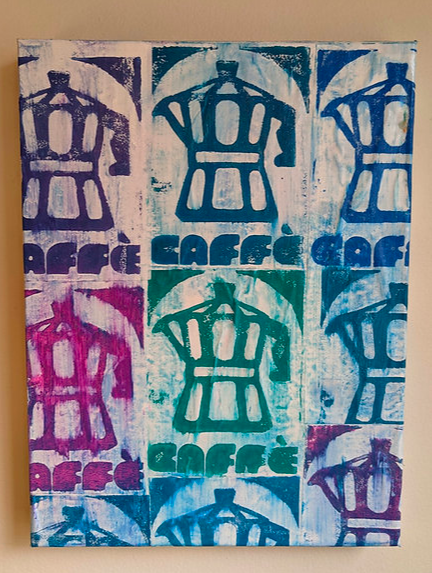 At the time, Catton, educated originally as a fiction writer, was working in finance and questioning the compatibility of a creative life with the funds needed to live it. That was how he ended up producing Time Value of Money, a geometric network of pinks, yellows, and blues overlaid with the word FAKE scribbled in it and a number of collage elements including an Italian-language Donald Duck and a Pellegrino label.

You’d be forgiven for seeing the arrangement as absurd, but the absurdity of Catton’s work is only the absurdity of modern life. “The phrase time value of money itself is a sort of dry financial concept about borrowing and lending,” he said, after patiently explaining the concept of interest to me, someone who bumbles through Fidelity investing with little understanding of what any of the words actually mean. “But I’m more concerned with how we inhale and exhale capitalism without realizing it. What squeezes our lives is this matrix of time, energy, and money.” Using Time Value of Money to express his simultaneous frustration and fascination with the currency and concepts that fuel our livelihoods started his path into more regularly painting and ultimately leaving his job. 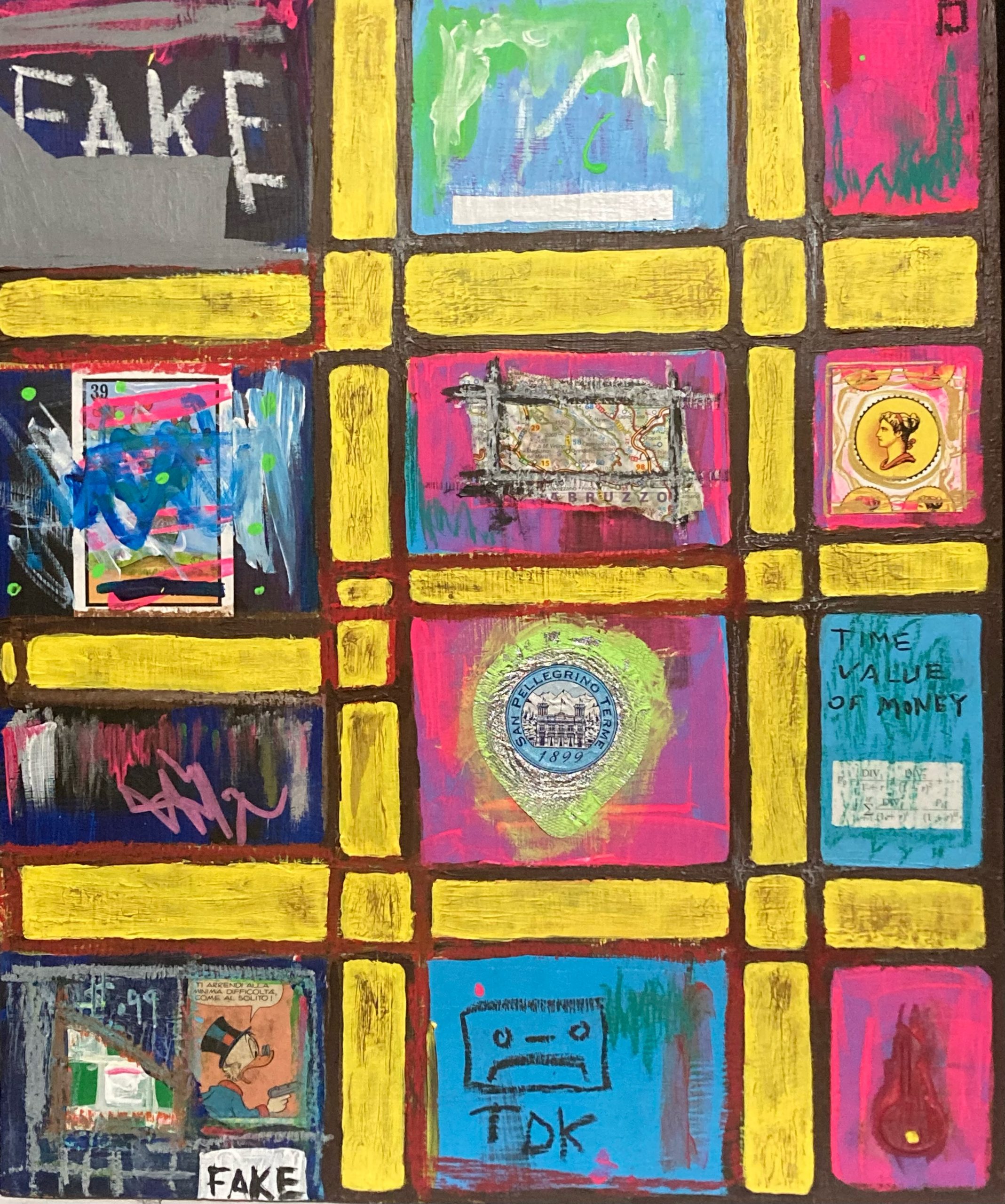 Critiques of capitalism in fine art are nothing new, but rather than simply critiquing it, Catton looks at it from the inside. As we talked about how the language of that world shows up in his paintings, he referenced David Foster Wallace’s 2005 essay This is Water, a favorite of mine as well. The essential gist of the piece is that a fish doesn’t know it’s swimming in water, and in order to live a meaningful and self-aware life, you have to constantly remind yourself what you’re surrounded by. For Catton, that sea surrounding us all is capitalism and the constant societal drive to profit and optimize.

But it isn’t all bad. “I actually love the ideas of finance, because it’s the language of value,” he said. “I’m a child of the ‘80s, I love commercial labels and I love neon, fluorescent, and disorganized. I’m interested in accessing that point where the subconscious and conscious mind meet.” In today’s world, what could be a better illustration of the subconscious than financial and consumer choices one makes? Within the online bank statements and investment accounts you find your own interests, values, thoughts, and desires summarized in tiny numerical energy exchanges. And that’s what Catton’s work speaks to—how money’s presence in our lives is inescapable and its grip on psyches of even the most anarchist and immaterial among us is not an easy one to navigate. 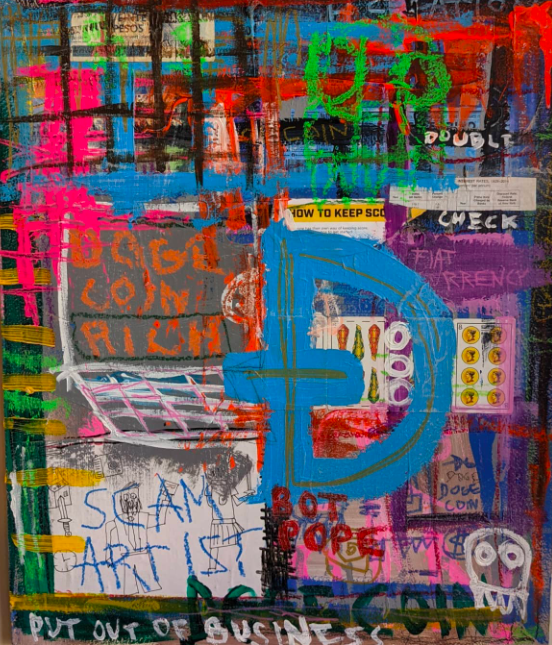 “I’m a child of the ‘80s, I love commercial labels and I love neon, fluorescent, and disorganized.”

However, one of his work’s great strengths is that it doesn’t hit the viewer over the head with a statement about the evils of consumerism or excess. “I’d rather err on the side of random and inscrutable,” Catton reflected. “I don’t like to be heavy-handed. I’d write essays if I wanted to say something like that.” Catton’s background as a writer and training in fiction does appear in his paintings, though. “I’m first and foremost a word-obsessed person and I’ll always love putting words in my work. But writing is so cerebral, and painting allows me not to be that cerebral.” As much as possible, he tries to create things viscerally rather than cerebrally, which means his influences can be as out-of-the-blue as a set of tan and blue curtains on Narcos that inspired the background of one of his pieces. 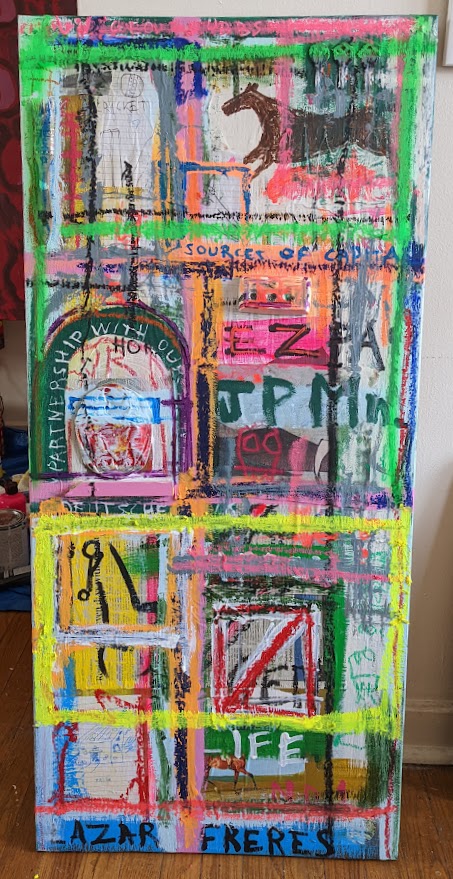 “I’d rather err on the side of random and inscrutable. I don’t like to be heavy-handed. I’d write essays if I wanted to say something like that.”

But Catton also draws from his own personal background and upbringing for his aesthetic sensibilities. If you spend some time with his paintings, whether the catalogue in his recent show Found/Assembled or the assortment in his personal studio, you’ll notice smatterings of Italian language, Italian maps, and Italian comic books. However, it’s a far cry from the East Coast stereotypes of Italian-Americans of The Sopranos or The Godfatther—instead, Catton’s expression of Italian culture is something more subtle and a perspective less often seen.

Catton was raised in Wheeling, West Virginia in a Rust Belt Italian-American family, which he expressed in an early collage-on-cardboard piece, Weirton Steel. That particular piece uses an impressive variety of materials including a map of West Virginia, Catton’s own business card from his former place of employment, multiple cards from the Italian scopa deck, and the handwritten phrase piu soldi, piu opportunitá. “The soul of Italy is very medieval and violent,” he remarked. “It’s what I have available to me because it’s my culture.” The scopa deck, an Italian card game with visual similarities to the tarot deck, is a frequent symbol in Catton’s work, whether painted over, cut up, or written on. It has an eerie quality to it that feels reminiscent of that medieval violence of old Europe. 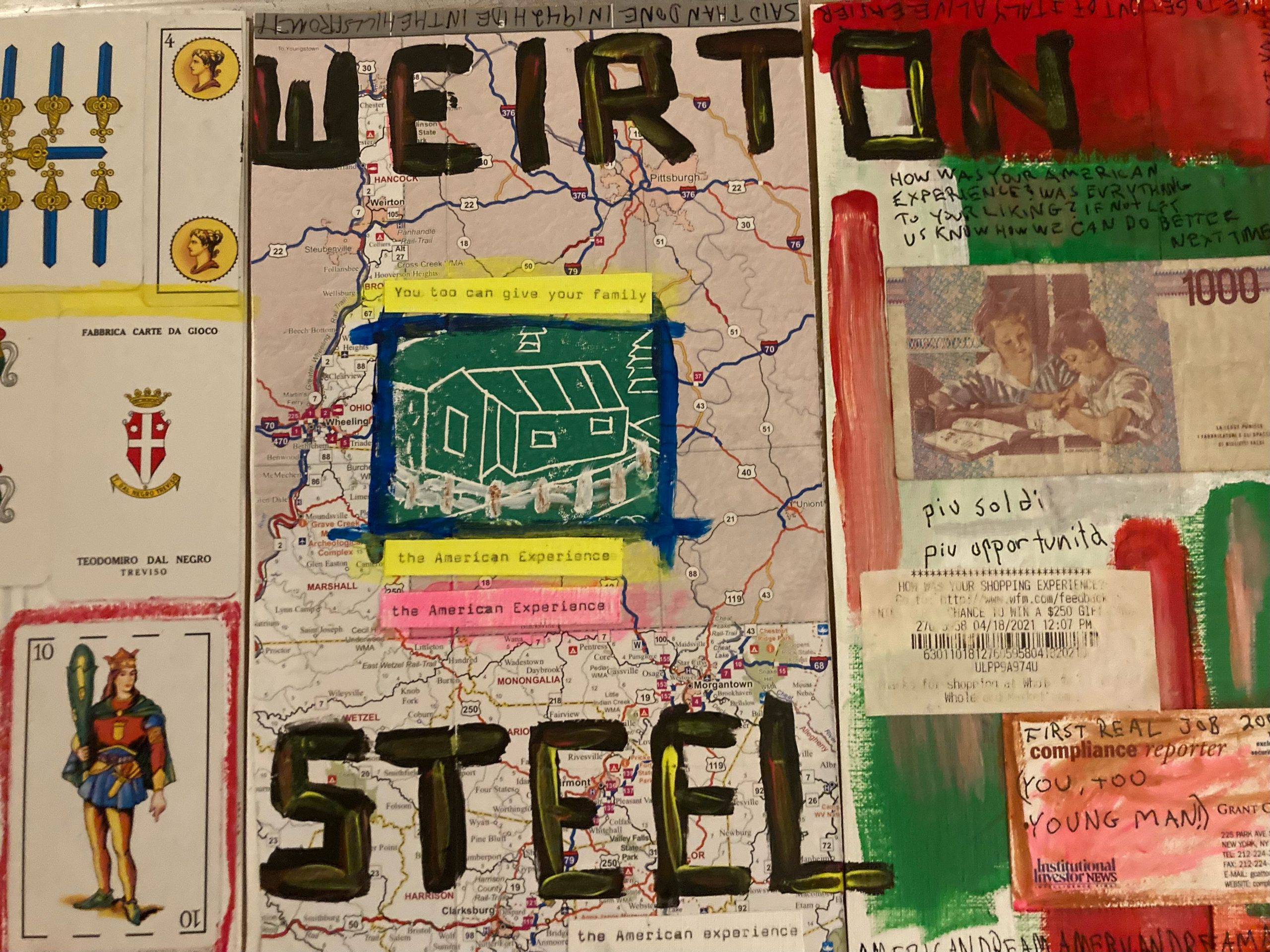 “The soul of Italy is very medieval and violent. It’s what I have available to me because it’s my culture.”

As we were discussing his influences and background, Catton recalled something he heard author Junot Diaz say at a reading in Indianapolis where he was getting his fiction degree. “Somebody asked Diaz who his influences were, and he said, ‘I’d love to tell you that my influences are Shakespeare or Dostoevsky or whoever, but I’m just as influenced by the back of a cereal box or Superman comics,’” he recalled. Though the visceral nature of Jean-Michel Basquiat’s collages and the maximalist commercialism of Patrick Nagel’s portraits were undeniable ideological influences to Catton, his work is often physically made up of IKEA tables, plywood, or old cabinet doors. The physical experience of viewing his work is less about analyzing it as successor to Basquiat or a statement on society’s ills because the paintings invite you to linger on them as physical objects. 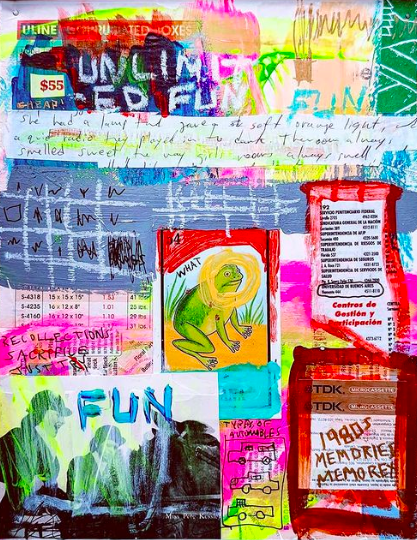 “Somebody asked Diaz who his influences were, and he said, ‘I’d love to tell you that my influences are Shakespeare or Dostoevsky or whoever, but I’m just as influenced by the back of a cereal box or Superman comics.'”

When I was helping Catton hang his paintings for Found/Assembled, I spent quite a bit of time with the canvases themselves and getting flecks of acrylic on my sweatpants and in my hair. There’s a tactile experience to the paintings, and the longer you stick around with them, the more the brushstrokes start to take on a life of their own. When more and more forces we can’t touch start to rule our lives, from social media to inflation to virus particles, Catton’s paintings provide something physical to help understand it all.

Grant Catton’s work is available for view and purchase on his website and Instagram. Though Found/Assembled is no longer on view in Pittsburgh, Catton has shown at .5 Gallery, Yinz Coffee, and Arriviste and continues to paint on found surfaces all around the city.