Below the Belt: An Exhibition of Works by Gunnar Magnus

AN EXHIBITION OF WORKS BY 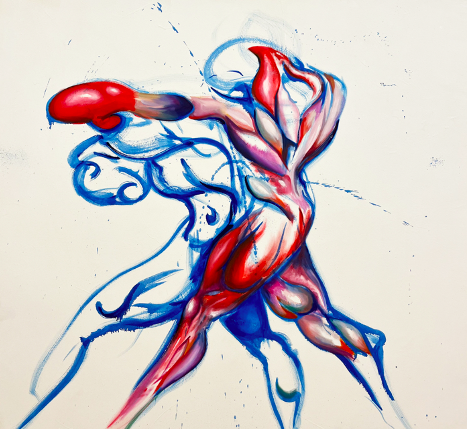 The Locker Room is pleased to announce the “Below the Belt” exhibition running October 21st – November 20th, featuring a body of paintings and mixed media works by Gunnar Magnus, accompanied by a newly minted NFT series. Magnus, an oil painter and new media artist, creates his work through the manic cross-pollination of AI image generators and experimental painting techniques. This solo exhibition centers the “pugilist” – boxers, fighters, and polished champions – as a means of exploring the violent, sensational push and pull between human and machine, organic and inorganic. In a focused flurry of dynamic anatomy and digital motifs,  warped musculature and otherworldly figures, Magnus meets the brutal challenge of conquering AI, the “seed of all evil” to practicing painters. 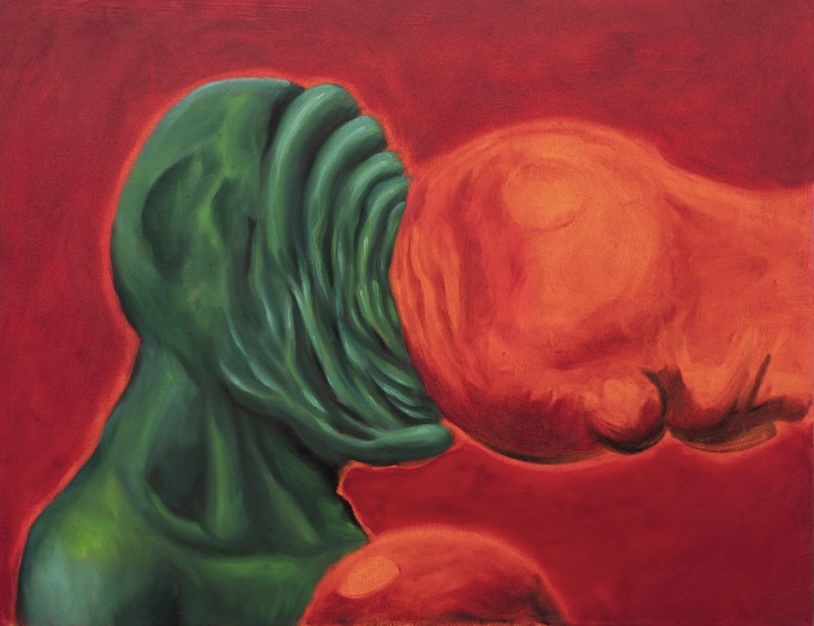 “Spelunking my own memories has never been easy, especially when it comes to the intent of whatever it is I’ve managed to pull off with a brush and paint. I can easily tell you the “what’,’ that “what” being the rise and sudden fall of Midjourney as a public interest in the world of crypto art, and event that was the end of the beginning of the end of my war with digital art. I was coming off a two-year run in the NFT space on nothing but digital drawings and crude frame by frame animations as my output of choice.

“It was nine months since I’d last picked up a brush, and suddenly, like all things in the NFT space, the conversation had suddenly shifted to a then little-known AI art program called Midjourney.”

It was nine months since I’d last picked up a brush, and suddenly, like all things in the NFT space, the conversation had suddenly shifted to a then little-known AI art program called Midjourney. While bonafide AI artists like Claire Silver had already cut their teeth and made themselves known for these mid-resolution abstract text prompt results, this was the first time I was afforded the opportunity to utilize such tech. Seizing the opportunity and churning out 5 straight days of prompts I’d assembled a collection of unique results which resembled something that was halfway between a painting and a photograph, and the first drop of inspiration for this entire series.

“My head was at a place somewhere halfway between sexual and violent, organic and inorganic.”

Prompts loaded with repetitions of “robo” “plastic” “chrome” “latex” “fighter” “boxer” “warrior” clearly showed me that my head was at a place somewhere halfway between sexual and violent, organic and inorganic. I suppose that can surmise the entire series as far as “vibes” go. From these text prompt results sprang more than a few ETH, as well as the means to procure a studio where I could lift the brush again, as this series proved to me that AI really was capable of doing everything I could possibly ask of it. What AI was not capable of though was doing everything I could possibly ask myself. Much like the undo button on Photoshop, I could go back to any phase in the prompt process and create another branch in the lineage, fork a new bloodline of work based on one aesthetic variation. This is something I’ve never been able to do for myself. My work is in a constant state of forward motion, it is not often that I go backwards, revisit, rewrite, repaint, etc. I’m Newton’s First.

“That’s probably what the computer always lacked, its own genuine obsession. The computer is a slave to our own obsessions, but it has no interests of its own”

So taking the aesthetics and concepts and “models” if you will, I got from this AI adventure and reprocessing them through a brush was the next logical and instinctive step. And from those paintings sprang more paintings that were even further away from the original seed planted by Midjourney. More and more human error made these mutant plasticine pugilists my own IP, my own story, my own fascination. That’s probably what the computer always lacked, its own genuine obsession. The computer is a slave to our own obsessions, but it has no interests of its own. I think computer generated art placed chips on a lot of shoulders this year. I saw a lot of painters get fired up over it, expressing either disdain or fascination with its potential. But I think for the lot of us it was a bit of both, and this is how I chose to cope with it. Being defeated by a computer is never a good feeling, we were all bred to feel that way by the science fiction we grew up on. So yeah, this is how I returned fire at Skynet.” 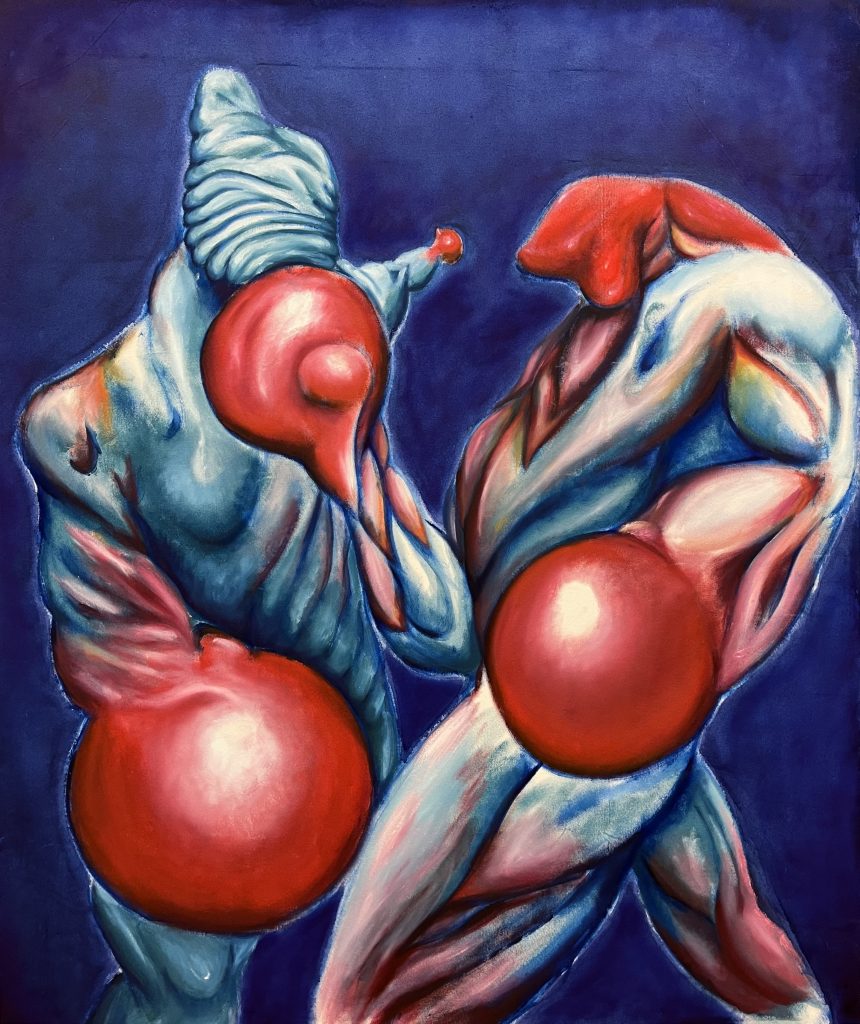 Gunnar Magnus is a 25 year old oil painter and new media artist based in Brooklyn/Soho New York. Starting from a very young age, Gunnar’s work has always held a consistent tone of surreal subjects with dynamic action. Beginning with painting in the street, Gunnar progressed from studio to studio becoming more fine art and painting oriented with each move. His painting practice has been honed over years of experimentation, touching different edges of the surreal, the figurative, and the abstract. His foray into Crypto Art began in February 2021, minting NFT’s that were digital collages of his own paintings, before progressing into digital paintings, animations, and AI artwork.

ABOUT THE LOCKER ROOM

The Locker Room is a femme-owned creative house that comprises an art collective, a gallery, and recording studio based in Brooklyn, New York, with a medium-fluid approach that incorporates visual art, music, performance, fashion, film, products and pranks. TimeOut Magazine named them Best Gallery in New York City for 2021.

Opening: Reception will be held on Friday, October 21, 7-10 PM, featuring a live performance by fighters from Warriors Nation MMA.