Hannah Kate Absalom remembered her graduation from the Glasgow School of Art as a list of names flashing across a computer screen “like Star Wars.” The English painter and printmaker’s work draws some inspiration from science fiction, and March 2020 ushered in a stranger-than-fiction era of masked figures, ghoulishly empty streets, and advertisements posters of ballerinas and painters with the tagline “She could have worked in cyber.”

Absalom, a lover of history and science, felt demeaned and condescended to. “I remembered in sixth form I did very well, and my teachers told my parents: ‘Don’t worry, we’ll make sure she doesn’t study art.’ Art was pushed on people who got lower grades, and that wasn’t me,” she recalled.

From a small town near Newcastle on the English coast, Absalom attended a Christian Ethics school and had a “love-hate relationship” with organized religion. “I was always jealous of my friends who went to Catholic school,” she said. “There was so much drama in it. Those friends would tell me their schools were terrible, but the Protestants were just so boring.” Her Glasgow School of Art thesis compared Christian icons with the aesthetics of horror films. She remembered a huge crucifixion in the center of her hometown that had an uncanny feeling to it, and from a young age she was hooked on how the aesthetics of suffering and violence show up in both religious imagery and mass media. She poured herself into studying the Crusades and the medieval period and began to paint her own theology of uncanny beauty and violence. 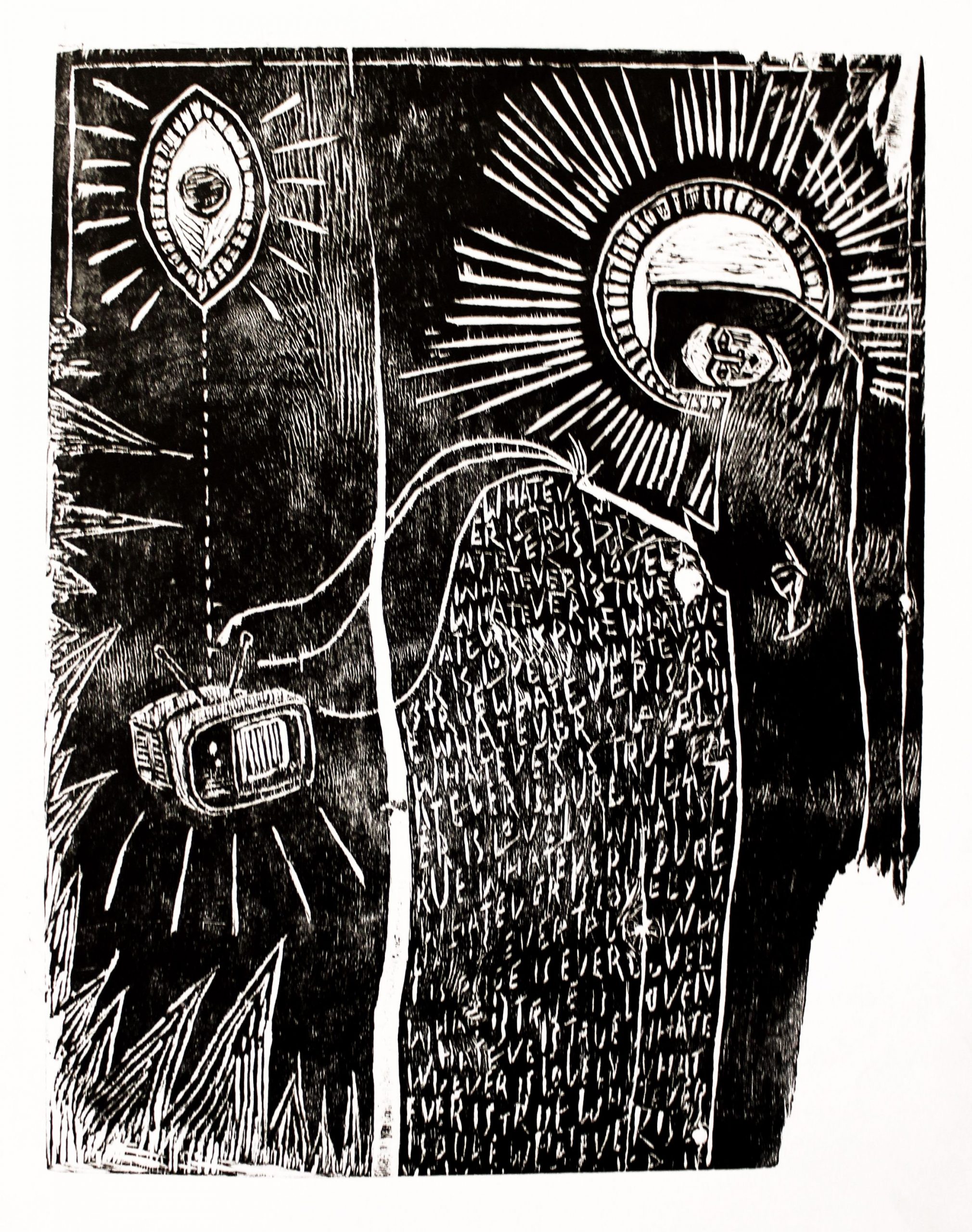 “I was always jealous of my friends who went to Catholic school. There was so much drama in it. Those friends would tell me their schools were terrible, but the Protestants were just so boring.”

I spoke with Absalom at Tchai Ovna, a dimly lit teahouse with no cell service or internet in it on a side street by Glasgow’s Kelvingrove River. She sat across from me surrounded by her paintings and woodcuts, the amber light catching her recently bleached platinum blonde hair. On her right arm is a tattoo of an angel, her first tattoo, inked by the Razzouk family in Jerusalem, where she studied at the Bezalel Academy of Art and Design in Jerusalem on an exchange during art school. The Razzouk family is renowned in Israel as the artists who tattooed the Crusaders, and advertise themselves as “tattoos from the 1300s.” Absalom was one of the only students from the Glasgow School of Arts to travel to Israel from 2019-2020, and the school was perplexed why she would want to travel to a country so far from the United Kingdom’s rainy, repressed secularism.

Absalom attended high school during the Trojan Horse Affair era when the government was investigating schools for being overly religious out of fear that religious education bred Islamic terrorists. Absalom’s Christian Ethics school was reprimanded for being too religious, and students had to stop carrying Bibles and the curriculum was slightly amended. By the time she got to art school, Absalom had seen the way religious imagery permeated through all aspects of secular life at the same time humanity was reckoning with how to replace it with science or mass media. The Bezalel Academy of Art and Design, where Absalom attended, is named for Bezalel, the artisan who built the holy tabernacle in the desert in Exodus 36-39. In Hebrew, bezel El means “in the shadow of God,” and every year when that particular Torah portion rolls around synagogues around the world discuss the relationship between art and the holy. 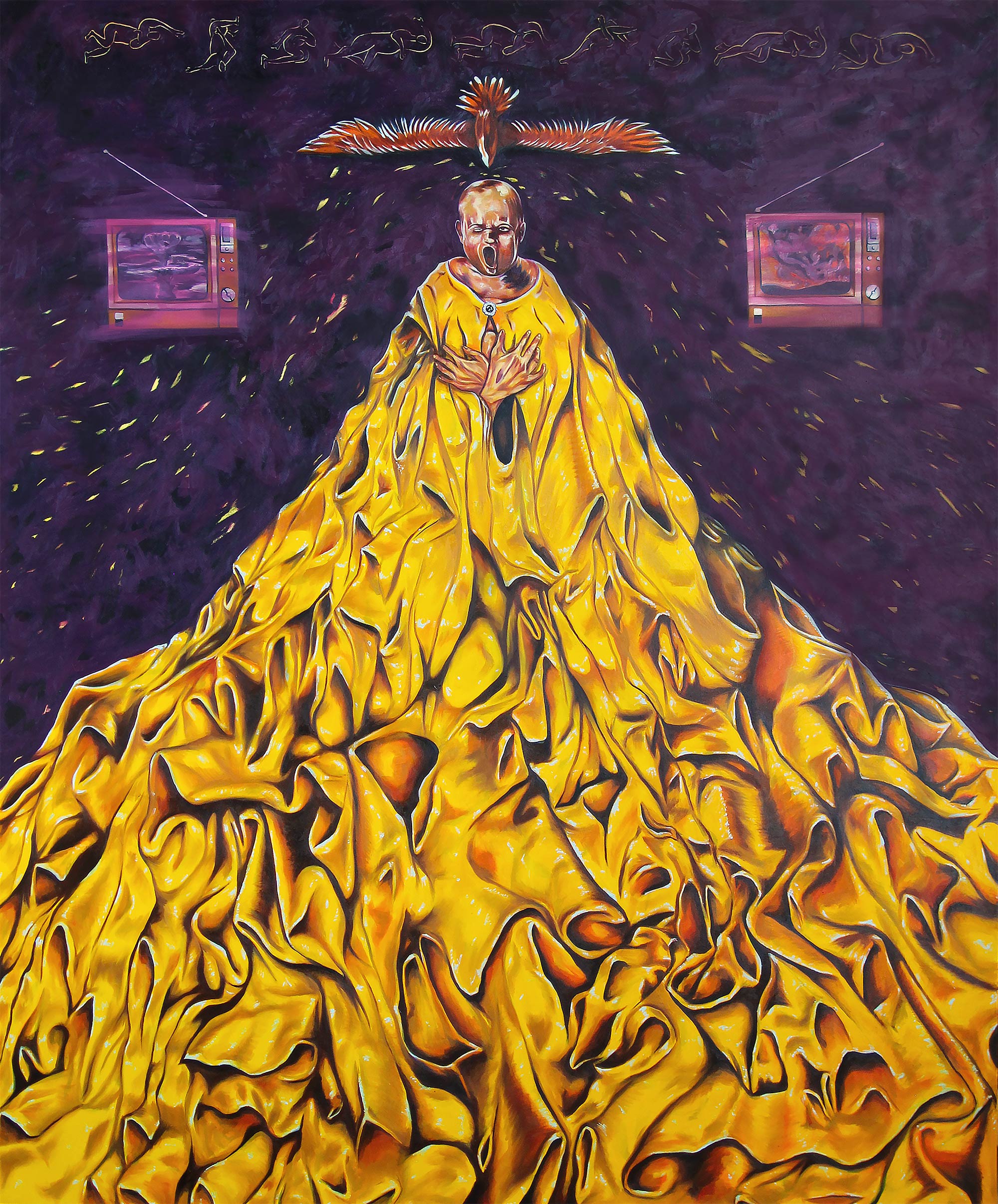 “Part of the reason I think religious levels have dropped is because of the separation from death.”

“Part of the reason I think religious levels have dropped is because of the separation from death,” Absalom said as we sipped our chai and chatted about our shared affinity for Caitlin Doughty’s Ask a Mortician YouTube channel. “I grew up with aging parents, and my dad would point at the telly and say things like ‘That’s the song I want at my funeral.,’” she said. The song was The King’s Return from the film The Kingdom of Heaven, coincidentally about the Crusades. We laughed about the idea of having a Viking burial and creating high drama even in death. “Every generation has the belief that it’s the one where the world will end,” she reflected. “Maybe it’s easier to imagine that when you die, the whole world will die with you.” 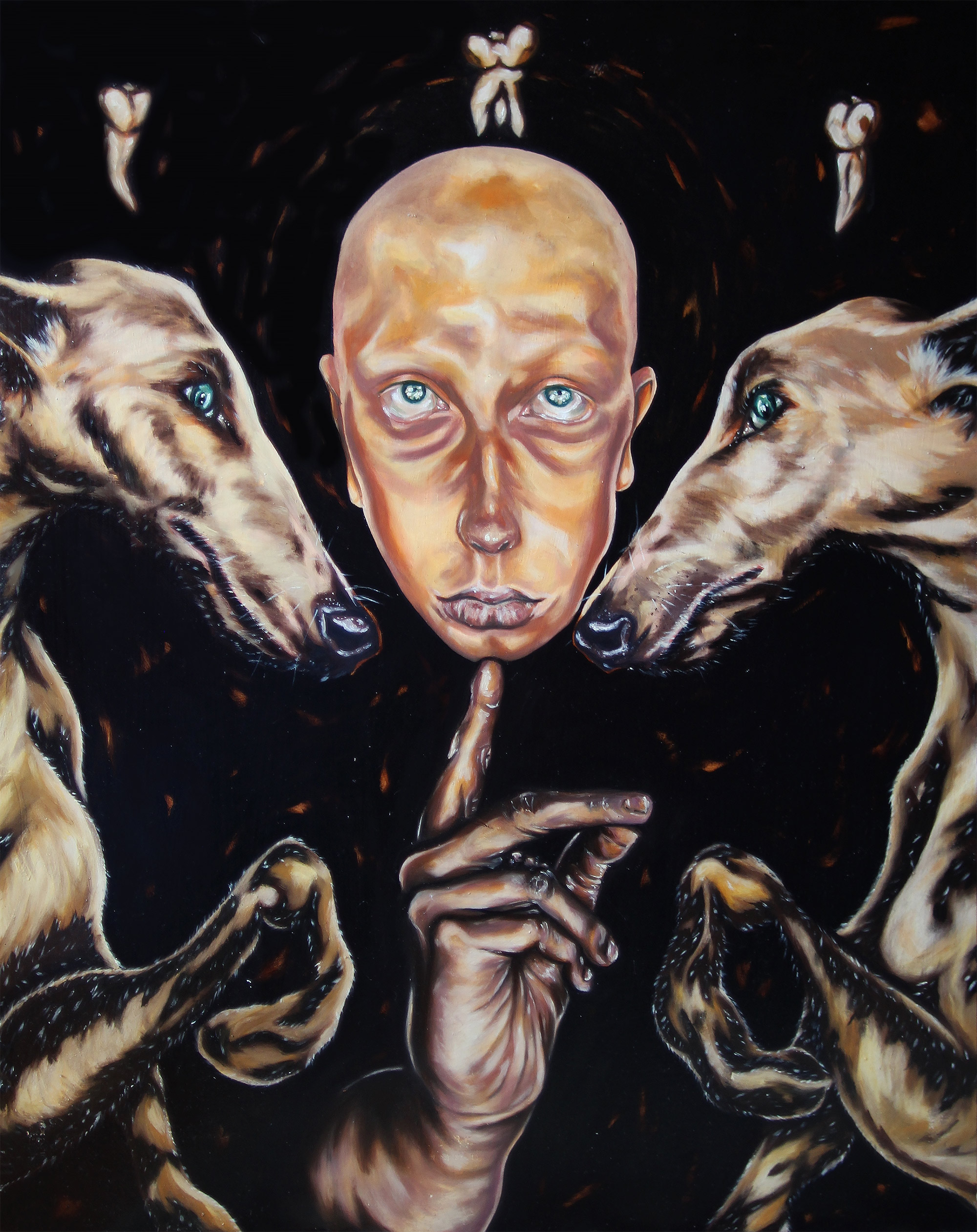 “Every generation has the belief that it’s the one where the world will end. Maybe it’s easier to imagine that when you die, the whole world will die with you.”

Her paintings are “modern day apocalypses” that harken back to the gritty, anachronistic nihilism of ancient Christianity. In Israel, she remembers seeing a twisted, blackened tree in the courtyard of Bezalel, which fellow students told her was the remnant of a time when the courtyard had been bombed. The ordinariness of death and danger all around her was both shocking and comforting.

Her triptych of paintings, Only Salt and Sulphur Left in Pergamum, The Forced Fruits of Tiphsah, and God Doesn’t Whisper He Screams all come from the idea of a modern-day apocalypse. The first shows a long, squinting face in a desert, the second a woman, the third an infant’s shrieking face on top of a cascading robe of gold. All draw from a particular social issue, whether climate change, women’s rights and contraception, or mass media and fake news. “I paint things where you know it makes you uncomfortable, but you might not be sure why,”” she said.

“I’m fascinated by those paintings of Medieval babies where they look like little adults, or those grotesque-looking Medieval dogs.” One of her largest influences was Hieronymous Bosch and his macabre of Garden of Earthly Delights. Another favorite is the depiction of Judith slaying Holofernes, which everyone from Artemisia Gentileschi to Gustav Klimt to Kehinde Wiley has latched onto. “Every hundred years or so, there’s this phase where paintings of women brutally killing men become popular,” she coolly observed. 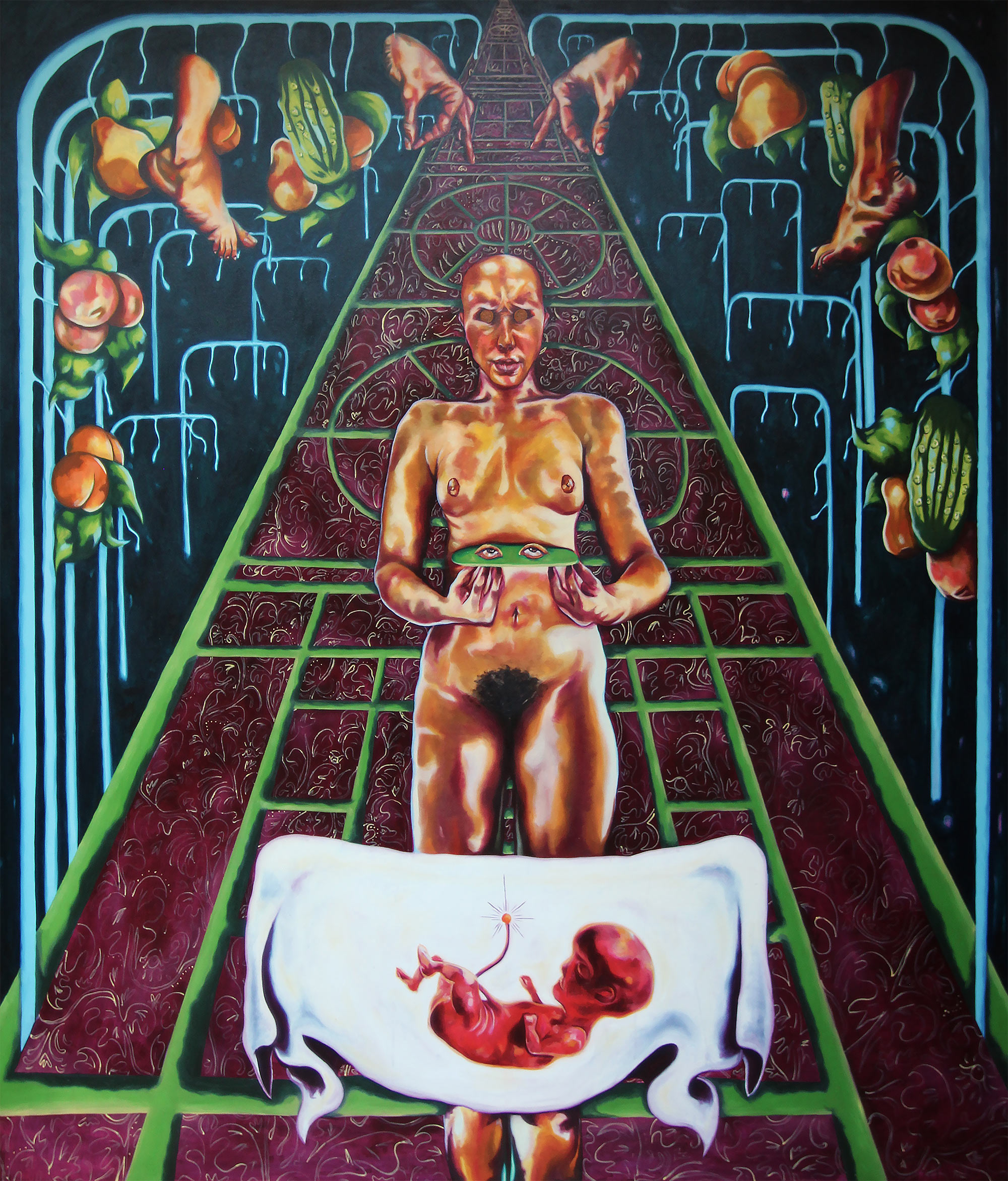 “I paint things where you know it makes you uncomfortable, but you might not be sure why,”” she said. “I’m fascinated by those paintings of Medieval babies where they look like little adults, or those grotesque-looking Medieval dogs.

Absalom’s openness to the macabre also manifests as incredible gutsiness. At Bezalel, she rode the train with jovial Israel Defense Forces soldiers and shuffled through the dark, wet tunnels of the western wall to refugee camps in Ramallah and came out with a more nuanced view of the country. Harrowing experiences like driving from Jerusalem to Cairo in the dead of night broadened both her personal and artistic view of the world.

Absalom saw the irony of the division between Arabic and Hebrew speakers in the interpretation of her own last name—every Arabic speaker thought it was Arabic, and every Hebrew speaker thought it was Hebrew. She attempted to trace it and discover who was right, but a lack of records in Newcastle before the 1800s made it impossible. “I do know that David’s son in the Bible was named Absalom, and he had long, thick, brown hair, so I remember thinking to myself that my name is Absalom and I have long, thick, brown hair, too,” she said.

This presence of the past, of mortality, and of violence makes her paintings almost shimmer as you look at them. Her palette of golds and reds and earthy maroons make the brighter colors she does use have an ethereal shine. “There’s all this talk about violent imagery in films, but in religious contexts, we don’t see the violence the same way in the art,” Absalom said. “And those Christian icons are more for a practical purpose than meant to be beautiful. I think you can tell when something was made with passion, like the Garden of Earthly Delights.”

Hannah Kate Absalom is represented by New Blood Art in London, and her work is available for purchase on her site as well as on clothing produced by streetwear company Gun Aimn. Her debut solo show, MIASMA, will be opening Wednesday 24th from 6-8pm at South Block Gallery, 50-54 Osborne St, Glasgow UK.