History of Graffiti in Rome: from Pompeii to the Metro B 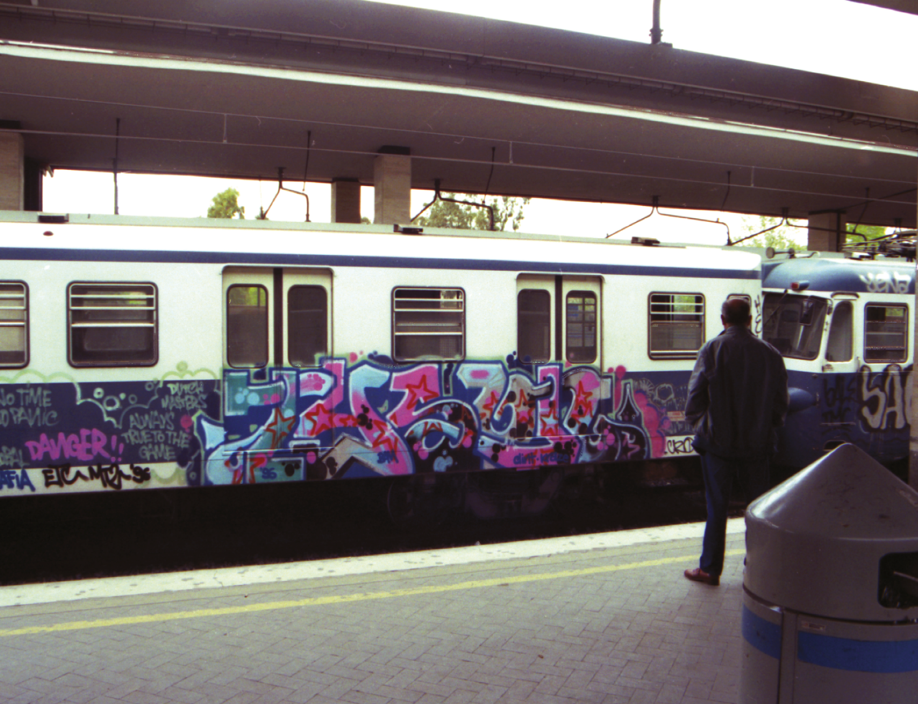 Where does the word graffiti come from?

The Britannica dictionary traces it back to the Italian graffio, meaning ‘scratch.’ So before being associated to the world-famous artistic movement in New York, the term was actually born in Italy. And yes, thousands of years before Phase 2 painted his first ‘masterpiece’ on the NYC subway, Romans were scratching graffiti on the walls of Pompeii.

Of course, when we talk about graffiti art, the first thought is to trace it back to 1970s Brooklyn – to when Cornbread and Taki 183 first wrote their ‘tags’, and the first New York City subways started showing up with colorful names painted on their sides. The tale shifts to how the authorities responded to this first burst of creative expression, how security ramped up in train yards, and how graffiti writers transited towards the art gallery world, moving their masterpieces to canvases.

But what if I told you that graffiti on subways didn’t die in New York, that the term travelled back to where its name was born, and lives on in the subways of Italy’s capital?

As illustrated in the new book Roma Subway Art, Rome is one of the only cities in the world where subway graffiti still survives to this day. If you ride the lines, you might still get a hint of that signature 80s New York vibe. But wait, how did we get there? Let’s take a look at where it all started. 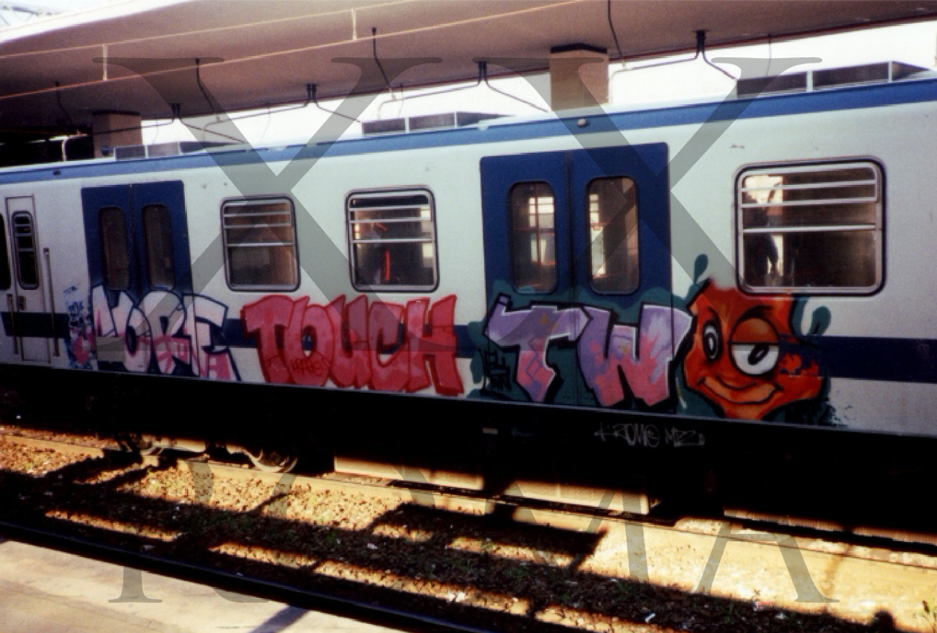 At the time in which Lee Quiñones, Dondi, and Blade were painting their first artworks on the New York subway, hip hop culture was barely a rumor in Italy. The country was too busy recovering from a period of political upheaval called the ‘Anni di piombo’ (literally ‘Years of Lead,’ after the bullets that were fired). Funny enough, the first time graffiti made the trip overseas from the US, it actually popped up at an art gallery in Rome. Claudio Bruni, owner of Galleria La Medusa, had been impressed by graffiti art in a recent trip to New York, so he invited Lee and Fab 5 Freddy to exhibit their artwork in the Italian capital. The year was 1979.

A few years later, none other than Keith Haring came to Rome during a tour of Italy. He painted a cluster of his eponymous characters on the Palazzo delle Esposizioni and one on the anti-noise barriers at Ponte Nenni, the bridge where the Metro A crosses the river Tiber. Urban art was not known or appreciated in those years in Italy: it was considered visual noise. It shouldn’t be a surprise then that Haring’s graffiti was removed in 1992, in view of a visit by the politician Gorbachov. Haring, of course, would go on to become one of the world-renowned icons of street art. I bet the administration are still biting their nails on that one!

As the 80s moved along and graffiti spread throughout Europe, the first hip hop and breakdance groups were born in Rome, inspired by videos such as Flash Dance or the film Beat Street. Some of these groups started trying their hand at painting murals on the banks of the river Tiber, which soon became a training ground for urban artists. On the 19th of September 1992, Cromo, Giaime, Crash Kid, Spike, Soho, Damage, and Debone painted the first graffiti on a Lido Line Subway.

Soon crews started popping up all around the city, competing in styles to paint their colourful masterpieces on the metro. The book Spray Can Art by Henry Chalfant showed them how to improve their design, how to twist and find new connections between the letters, and how to paint in larger scale.

At first, the public and authorities didn’t know how to react to this new and exploding phenomenon. Media coverage wasn’t hostile from the get-go: in an article from La Repubblica in 1992, writers are described not as vandals, but as young men who express their anger through art. Crazy, right? So much so in fact that it was not meant to last. 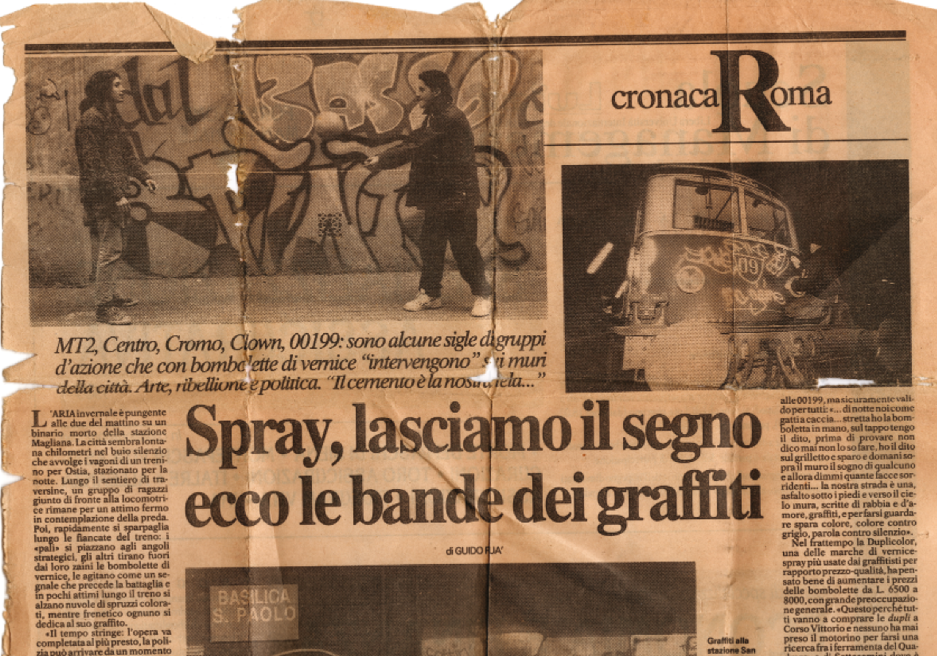 So came the years of 1995 and ‘96, often recalled as the Golden Era of graffiti writing in the Italian capital. Dozens of writers travelled to Rome from countries such as Germany, France, and England, and the sides of the Roman subway were home to a battle of styles. Each writer brought their own distinctive approach: the Germans favoured more precise letters and painted with high-quality cans, while the English painted silver pieces with block-style letters. Writers inspired and influenced each other, resulting in some of the most beautiful masterpieces to circulate on the Roman subway. As the pillars of classical and Renaissance art stood in defiance of time in Rome’s city centre, a new underground art style was on the rise.

The State Bites Back

As the 90s drew to an end, the graffiti phenomenon was becoming increasingly out of control. The subway transited with layers and layers of paint, which covered insides and outsides indiscriminately, doors and windows. The scrawls weren’t understood by the general public and were seen as a sign of lawlessness. They gave the impression that the state was not in control.

Public authorities began to clamp down on graffiti. Higher fences with barbed wire were installed on the edges of train yards and security guards began patrolling depots. A campaign was run which stereotyped graffiti writers as aggressive criminals. Remember how the Koch administration targeted writers in their media war on graffiti in 80s New York? Well, it seems like the Rome administration took note.

In the year 2000, Rome was to host the Jubilee, a special year for the catholic church in which sins are pardoned. Thousands of devotees would be crowding Rome’s streets, and the state wanted to project an image of a clean and tidy city. Graffiti countered this vision with its typical defiance. That year, the city sponsored what would be known for years as the ‘Big Clean.’ Every single train carriage was cleaned of the remotest trace of graffiti. When the Jubilee began, all of Rome’s subways were spotless.

Following the Big Clean, many writers stopped painting or shifted their focus to legal walls – spaces where the authorities or local councils allowed graffiti to be painted. Such walls have been no strangers to controversy. Purist writers maintain that, when moving to legal walls, a core aspect of the subculture is lost. Graffiti was born in the streets and on trains. When it is placed in an art gallery or on legal walls, it may well lose its vitality.

A select group of Roman writers has been carrying on the subway graffiti tradition up to this day. Among these, a name that stands out is surely Poison. This Roman graffiti writer began to paint in the late 90s and has carried on tracing masterpieces on the B Line subway up to today. He has rucked up more than 700 pieces painted on the subway and has made a name for himself both locally and internationally. Unsurprisingly, he is known as the ‘King of Blue’ – after the Blue Line of the metro. What really sets him apart is that he is competitive on both sides of graffiti spectrum: he aims for quantity, but his letters are alive with style. He has always shunned intricate wildstyles and uses the limited time at his disposal on the metro’s surface to paint clean, legible letters. Often there are cartoon characters to bookmark his pieces, showing how he wants to be appreciated not only within the graffiti environment, but also by the average commuter. Even my grandma thinks Donald Duck is cool!

Another name that really stands out in Rome graffiti history is Stan. He is credited for continuing the tradition of the so-called ‘Roman style’ of graffiti, invented by TRV crew back in the 90s. This had a lot in common with the lettering of the first generation of New York writers: hardware store cans were used to create a gritty effect which made for a kind of savage expressivity. They didn’t care what the passer-by would think – they painted what they felt, added a fat outline to make the piece legible, and sent it out into the world.

Stan loved that savage style. From the early 2000s to recent years, he painted an enormous quantity of quick, legible pieces with block-style letters on the Metro B Line. If Poison is the King of Blue, then Stan is the prince – and in fact, he’s painted a car where he calls himself just that! 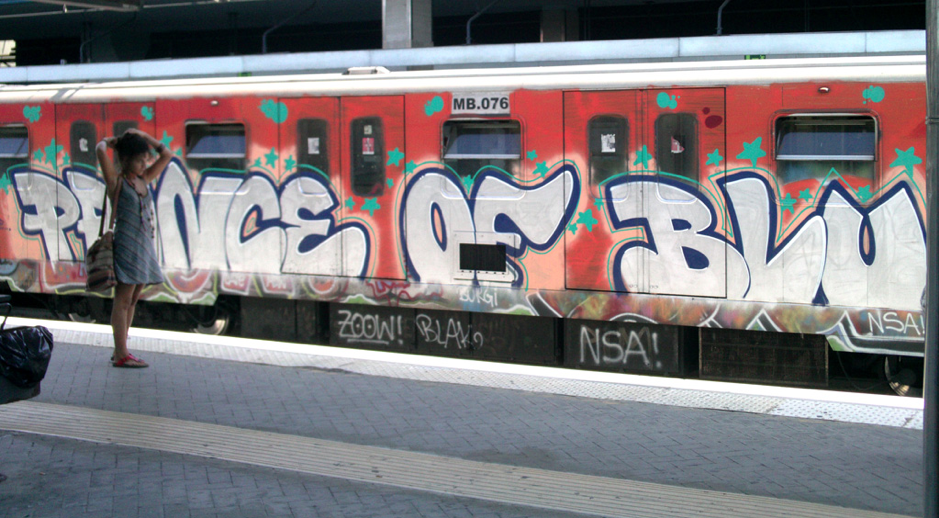 Stan and Poison are two of countless names which have battled for fame on the surface of the Rome subway. Unlike the Koch administration, Rome’s authorities have not yet managed to stem this insurgent phenomenon. That means if you come to Rome to see the Colosseum, you may still catch a subway with colorful letters on its side, just like in 80s New York. 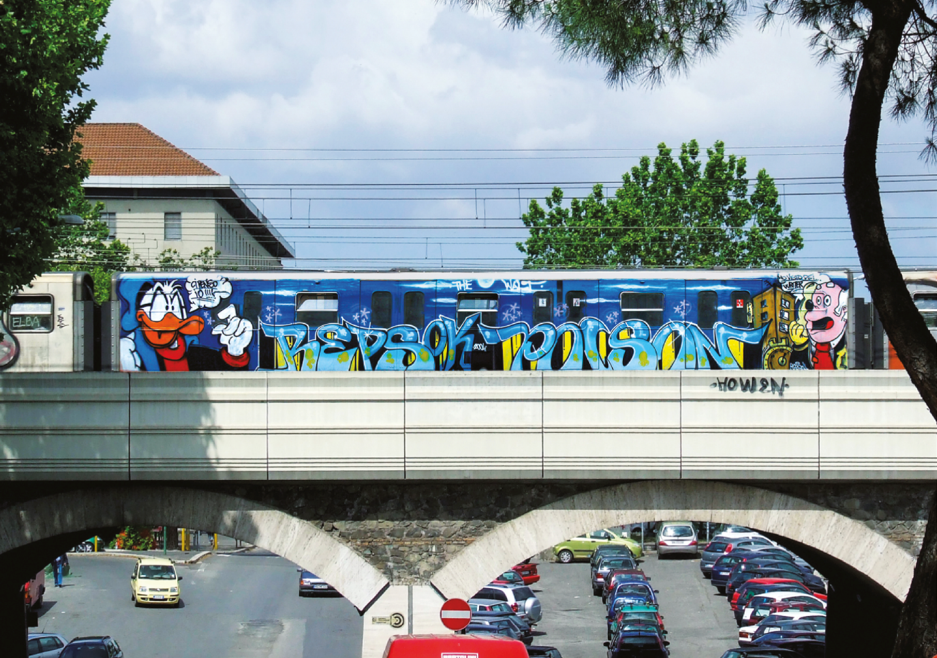 From Subways to Murals

Rome’s vibrant graffiti scene has expanded from the sides of subways. Neighbourhoods such as San Lorenzo, a cultural melting pot not unlike New York’s Brooklyn, are becoming street art hubs. Many of the writers who began their career painting on trains have moved on to murals – a good example is Brus. He started off with pieces on the subway alongside his partner in crime Jago. In recent years, he has made a name for himself in the legal wall scene. He has refined his spray-can technique to produce vivid effects for his pieces and regularly travels to graffiti conventions worldwide. 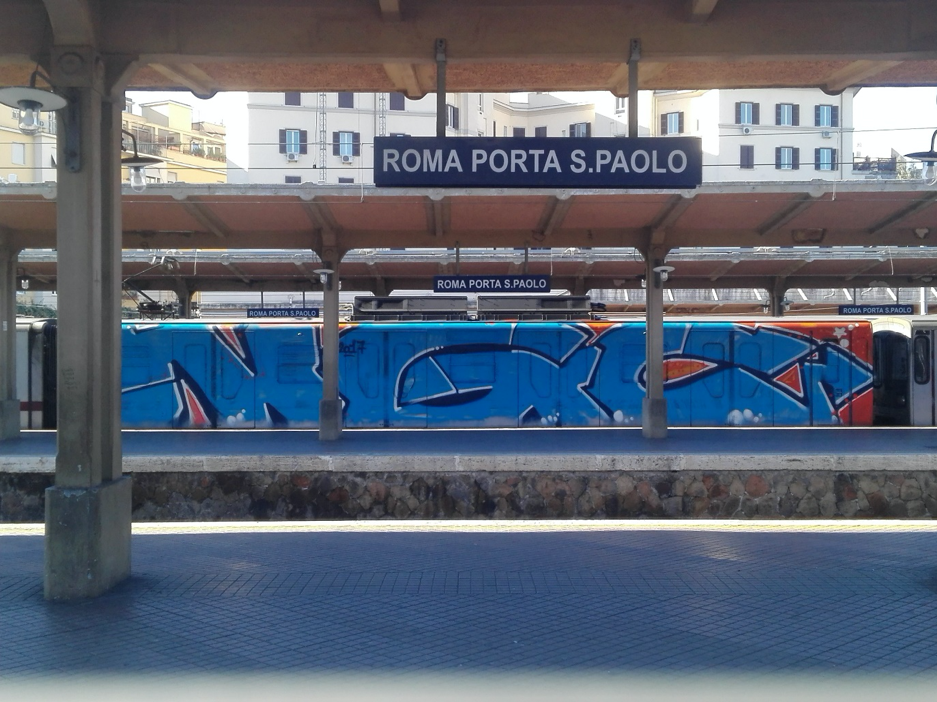 In recent years, Rome has been investing in a variety of street art projects. As places like Ostiense and Tiburtina become gentrified, efforts are growing to make the urban landscape beautiful through commissioned street art. Graffiti purists are calling out urban artists as sell-outs who make easy cash off a debatable street cred. Others think that street art is an evolution of graffiti which aims to reach a wider public. I’d stay away from any polarized definitions of truth. Street art and graffiti have been overused as terms to the point where they mean almost nothing. Rather than settling for an easy black/white narrative, I think the only way forward is to judge artist by artist. What moves them to produce their art? Is there truth in what they do or just easy likes?

One thing is for sure though – none of that marketable urban art would have been possible if it weren’t for the pioneers, for Giaime and Cromo sneaking in those yards back in that dreamy summer of ‘92.

Alessandro Pozzolo was born in Rome, Italy. He holds a Master from Lancaster University and is studying for a PhD in Creative Writing. You’ll find him nose-deep in some obscure 1950s novel, typing away on his cranky Lenovo laptop, or spraying fat letters across Europe with DIY-store cans.