Hoxxoh is an indisputable OG of the street art world, but despite his global reach, he still takes time for his local community in Florida. Hoxxoh, who started painting at the age of fifteen, was later a member of the MGS (Miami Graffiti Style. “I have learnt a lot from Miami,” he reflected in a previous interview for UP. “I like challenges, playing with my creative boundaries while trying to, if not push, at least move them around. The main question of my work is how to find harmony, that moment when a pattern slips out of chaos.” 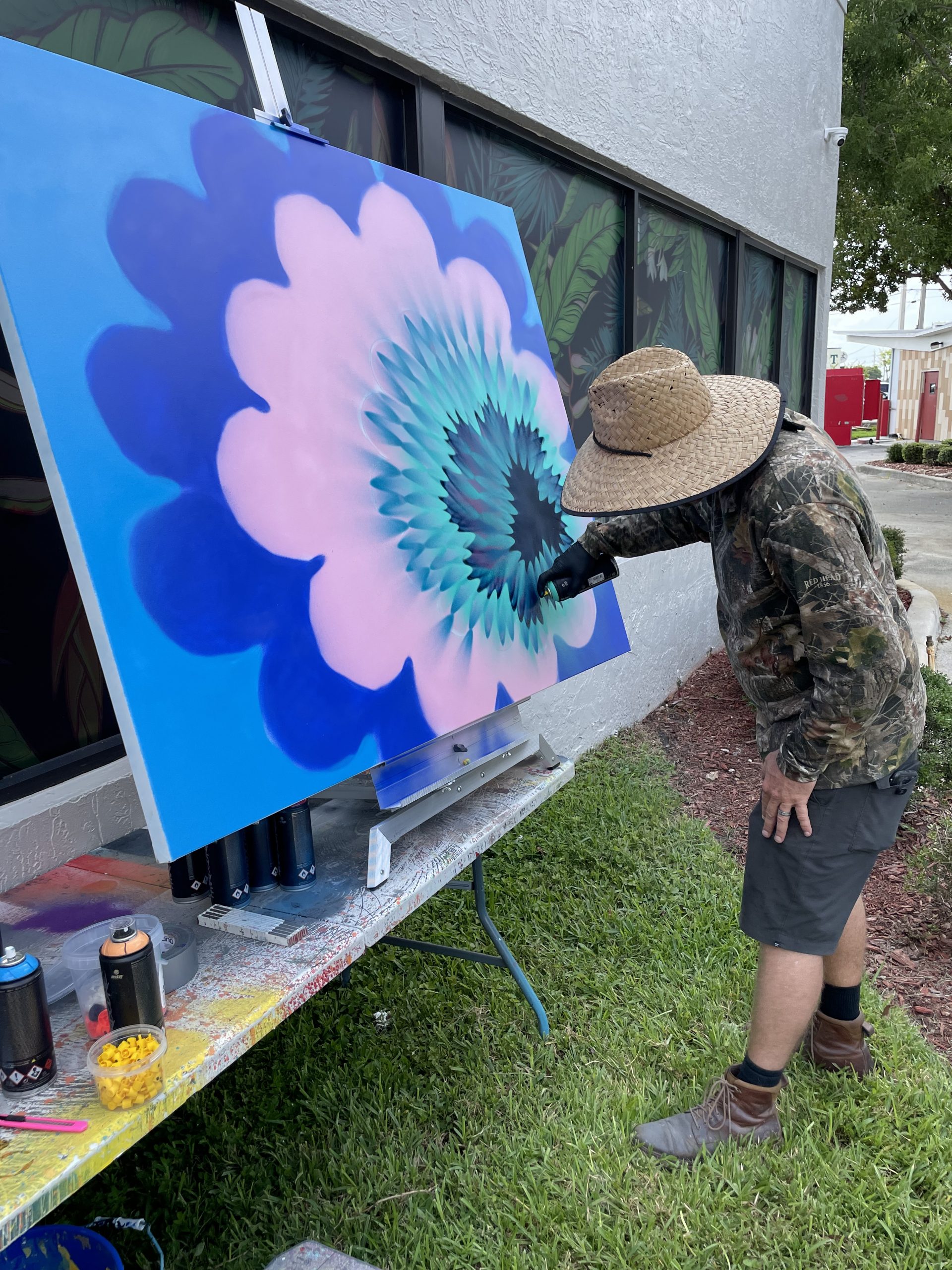 “I like challenges, playing with my creative boundaries while trying to, if not push, at least move them around. The main question of my work is how to find harmony, that moment when a pattern slips out of chaos.”

That focus on harmony and wellness has translated into the local business partnerships Hoxxoh chooses to do. In the first week of June, Surterra Wellness, an offshoot of medical marijuana brand Parallel, chose to debut its brand on Miami’s Sunset Drive with a live painting session with Hoxxoh. Surterra’s integration into local art won’t just end with Hoxxoh, though—they plan to create a statewide Artist Showcase that will help selected artists gain exposure and traction through their marketing venues. As I discovered when I explored Denver for UP, the marijuana industry is one full of upstarts and colorful characters who often see themselves as juggernauts in a new entrepreneurial landscape. It’s no surprise that artists often overlap with that side of the business world. 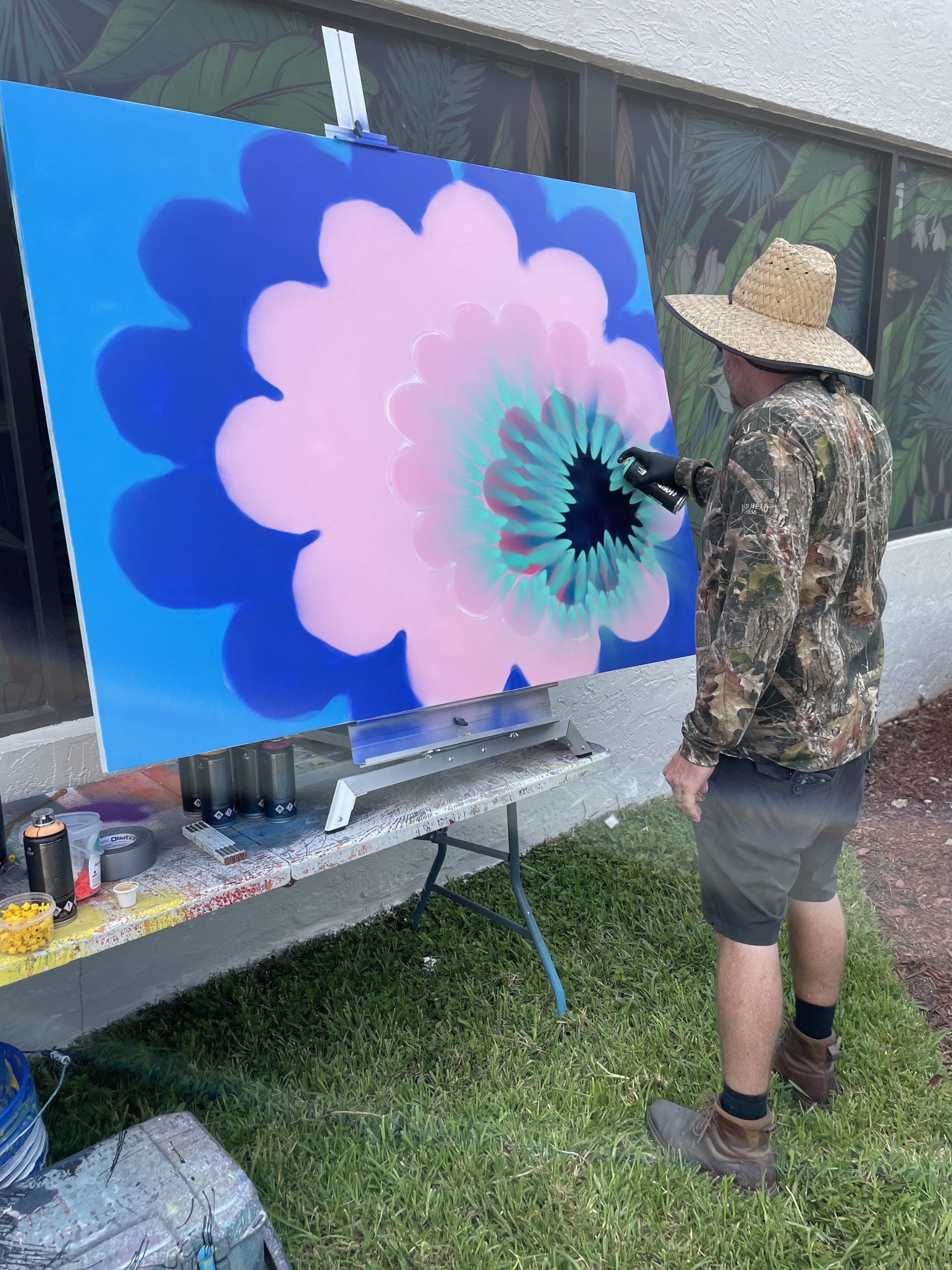 “My ‘Rainbird’ tool leaves its own mark and opens the door for new possibilities, allowing for nearly infinite flowing iterations,” he said.

At the live painting session, Hoxxoh, clad in a straw hat and mirrored sunglasses, began with a blank canvas and finished with a mesmerizing turquoise spiral. “From the beginning and throughout my career as an artist I have always been fascinated with pictorial projection techniques,” Hoxxoh said. “When I started out, there were very few graffiti artist or street artists who used those methods, but Futura 2000’s abstract street art paved the way for me.” The canvas at Surterra’s Miami branch started as more abstract blocks of pink and green and expanded into an intricate web of shades of green. “My ‘Rainbird’ tool leaves its own mark and opens the door for new possibilities, allowing for nearly infinite flowing iterations,” he said. Hoxxoh’s work plays with light and shadow to create visually dynamic walls and canvases that undulate in front of the viewers’ eyes, and his painting for Surterra was no exception. 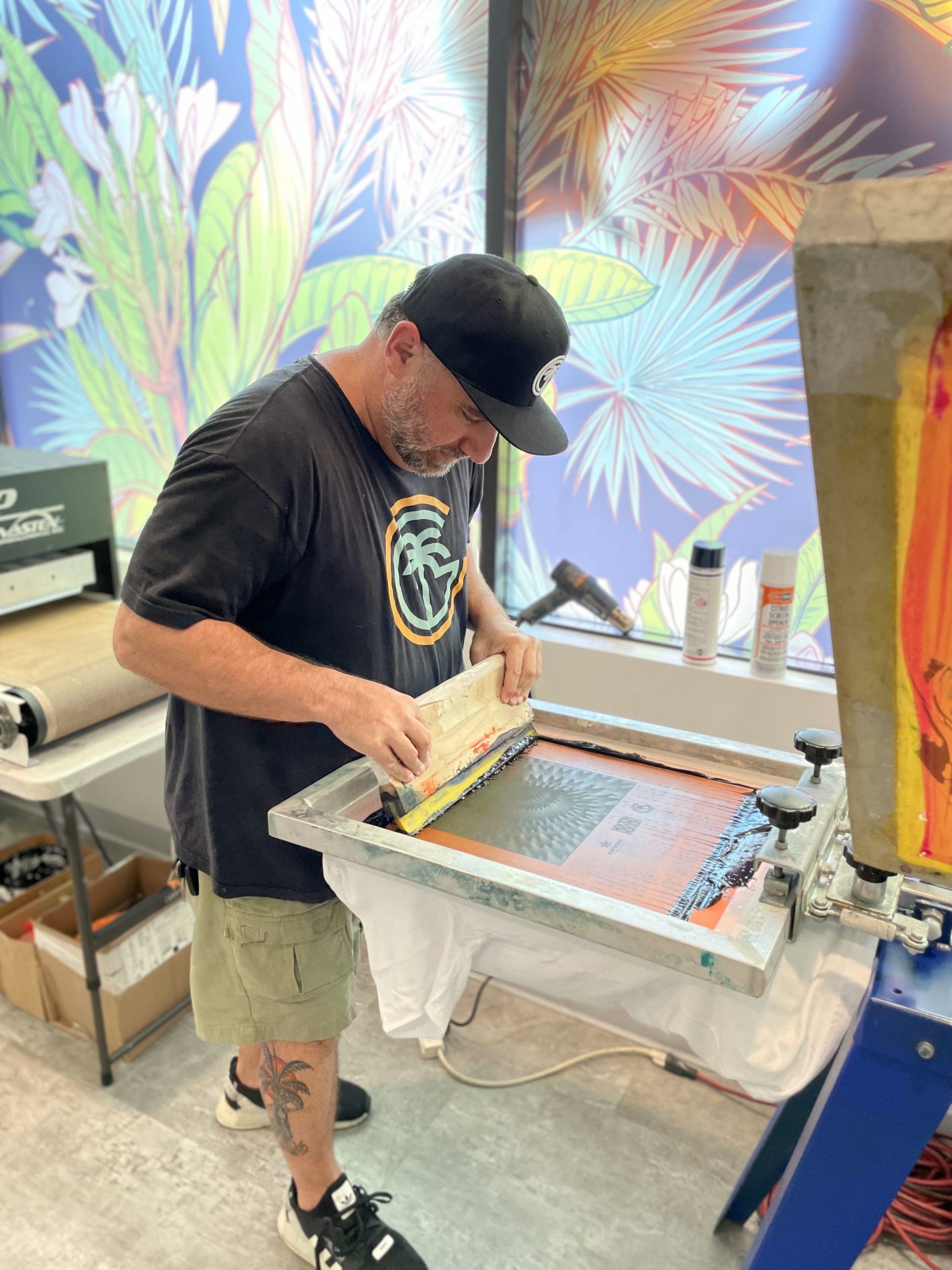 “Hoxxoh’s aesthetic is distinct and timeless,” Anda said. “Whether driving by one of his many murals in Miami, or any other city, you’re sure to know a Hoxxoh when you see one!”

Surterra didn’t simply draw Hoxxoh out of a hat as their debut artist to work with. Jeremy Anda, Surterra Wellness’ Senior Marketing Manager, met Hoxxoh when they worked together at Heineken to create a series of mobile murals painted on the side of delivery trucks. “Hoxxoh’s aesthetic is distinct and timeless,” Anda said. “Whether driving by one of his many murals in Miami, or any other city, you’re sure to know a Hoxxoh when you see one!” As an established member of the graffiti and street art community, Hoxxoh’s creative spirit has an inspirational power that draws in both community veterans and newbies to the world of public art. Many collaborations like Surterra’s with Hoxxoh have begun to pop up recently, which potentially shows how the start-up industry and the public art scene are realizing they have more in common than they might think. Entrepreneurship is lonely and business means wearing a thousand hats, something artists know better than anyone. 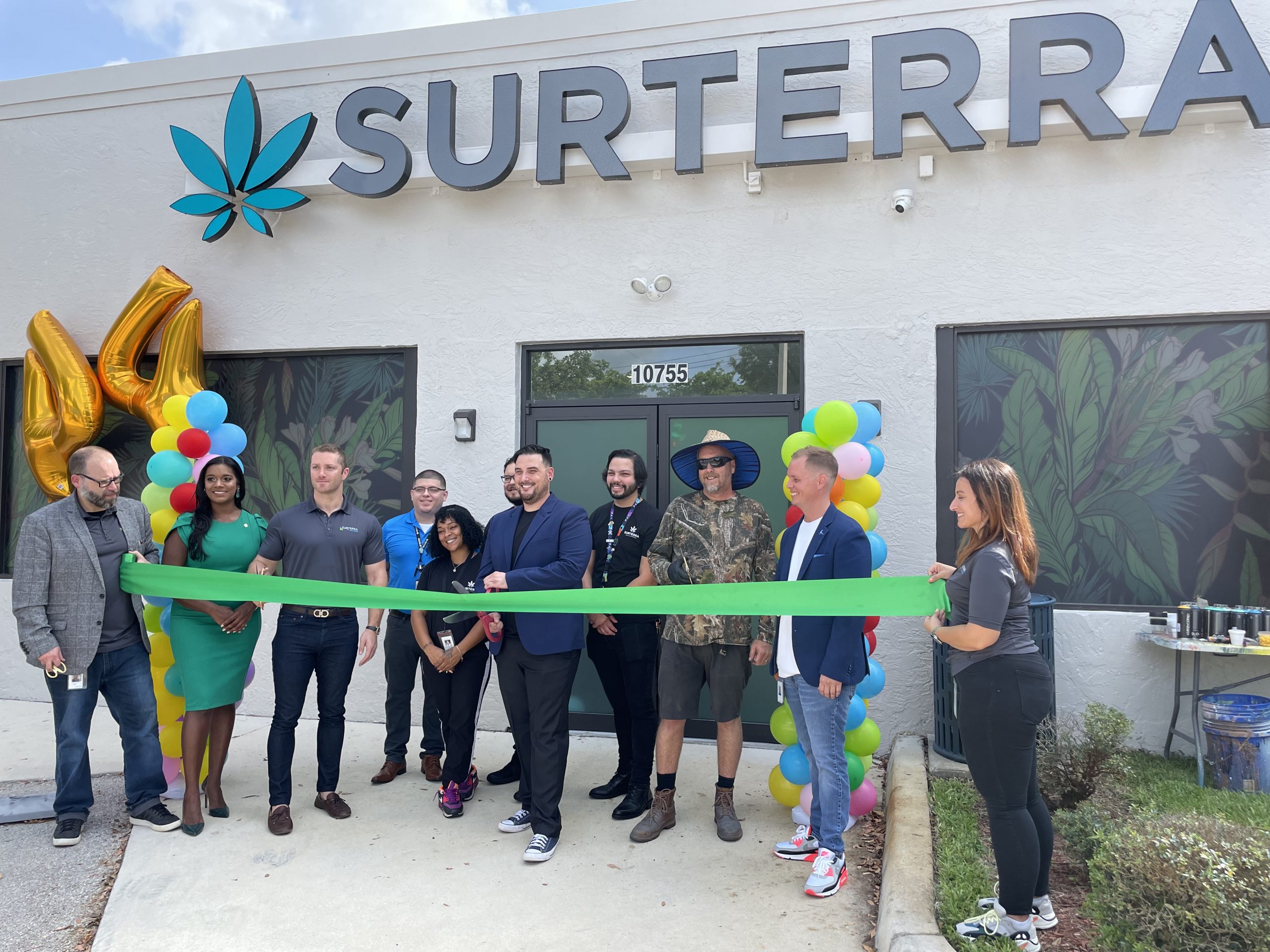 The partnership with Hoxxoh is just the beginning for Surterra. “While we’re just getting started with this initiative, we have high hopes for where it’s going! Our goal is to partner Hoxxoh, our resident artist mentor, with talent from across the state on innovative art activations that bring beauty and inspiration along the way,” Zachary Fleming, President of Surterra, said. “We want this art to get people talking and we want communities to pour into this new crop of artists to grow them right where they’re planted.” It’s Surterra isn’t only interested in growing the most effectives mixes of terpenes and caryophyllenes in their marijuana strains—Surterra also wants to nurture and grow visual art in Miami. If anything can help artists grow, it would be the same Florida sun that nurtures palm trees and cannabis plants alike.