You would be hard-pressed to fit one of Miami-based street artist HOXXOH’s famously large-scale murals on your kitchen table, but now that they’re in jigsaw puzzle form, you just might. Douglas Hoekzema, better known as HOXXOH, is a veteran street artist with an iconic style whose sweeping, geometric shapes are now available on a jigsaw puzzle sponsored by ARTXPUZZLES, a worldwide initiative supporting artists in the economic disparity fraught by COVID-19.

Part of what makes ARTXPUZZLES’ message so poignant is that it allows artists to support their own community, while still creating a one-of-a-kind piece and an entirely new way to experience the art itself. The puzzle itself is 12″ X 16.5″ and 285 pieces, which would certainly make for a good way to pass the time during a winter going by at a snail’s pace.

For those just learning who HOXXOH is, this profile serves as an introduction to his work, and for longtime fans his collaboration with ARTXPUZZLES is a new lens to see his style through. After all, just about anything would look different broken into 285 pieces.

HOXXOH: I started painting just over 25 years ago now and painted my first wall back in high school at the age of 15 back in 1995. I was fortunate enough to have parents that immediately supported my interest in art and encouraged the balance between studio and public artwork from the offset. It was at this time that my relationship with the graft crew MSG (Miami Graffiti Style) began. Once I graduated, I went onto study arts at university and gained master’s degree in architecture, with a double major in art history and painting, and a minor in philosophy. I’m grateful to say that during that 25-year period, I can say that for the past 10 years I have been a full-time practicing artist and it is my career as well as passion. 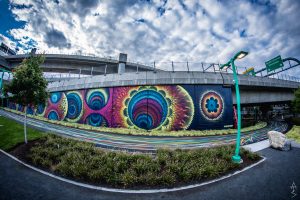 UP Mag: How would you describe your work to someone who’s never heard of you?

HOXXOH: If I had to quickly describe my work to some, I would say that I’m a painter that’s focused on mechanisms and non-traditional mark-making tools. The Aerosol can, or spray paint was the beginning of my development and investigation, which has led to paint pendulums, pans, trays, industrial airless paint sprayers, and irrigation systems; sprinklers, and a mechanism I have aptly coined “The RainBird.” By developing a language of marks and patterns through painting in pure abstractions and currently moving in a direction of surrealism.

UP Mag: How did you come to be involved with ARTXPUZZLES? What does its mission mean to you?

HOXXOH: I was excited and honored that both Rachel Margolin from Underground and Rachel Vancelette, the mastermind behind ARTXPUZZLES, had reached out to me to partake in the global art initiative. My work is not too dissimilar to solving a puzzle and the experience of orderly chaos so felt like a natural fit. What most sparked my interest in the project was the privilege to be part of a project that aims to give back to the industry I have been fortunate enough to call my career via the Artist Relief, as well as support those who have been affected by the current pandemic that sweeps the globe through the First Responder Children’s Foundation. Someone in my position has the ability and duty of care to use their resources where possible to help aid in relief and hope. 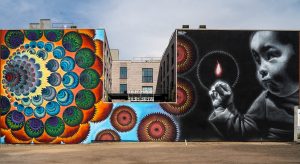 UP Mag: How was designing an art piece for a puzzle different compared to painting a mural?

HOXXOH: This particular design, HOX.TRANSFER 1.1, for ARTXPUZZLES has been selected from my upcoming solo show at LoftDu34 in Paris for 2021. I have arrived at a point in my work where I start to free myself from the random dimension of the experimental process to now compose schemes and structure my compositions. This piece is part of a series that I created during a month-long residency in Paris in February 2020.

Painting a mural is a lot like running a marathon or part-taking in a triathlon. It is a grueling and physically demanding task, the size, the scale and the unpredictability of the weather can be extremely exhausting at times.

Both methods are enjoyable and rewarding for their own reasons. 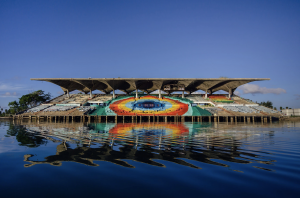 UP Mag: What was the process on the specific piece for the puzzle like?

HOXXOH: The piece was created using the pendulum and transfer technique. The pendulum method is Earth’s gravity attraction to a bottle filled to the brim with a litre of paint that is in constant motion until the moving force, along with the paint, becomes less and gradually comes to a halt. The transfer technique is slightly more complicated to explain but after applying multiple layers of paint to a tray or trough that I slide across the canvas. In this instance, I moved the tray across the canvas in a constructed portrait composition foreground on an implied landscape background. But such structure is not always applied in these techniques at all times.

UP Mag: Has your perspective on art changed at all in the age of COVID-19?

HOXXOH: We’re living through a rather strange and unpredictable time on a global scale. COVID-19, albeit has disrupted some of my large outdoor projects, has given me the opportunity to slow down and embrace the chaos of constant change. I am able to take life day-by-day, balance my life between immersing myself in nature, and focusing on creating art and the intentions behind my art rather than frantically creating to meet deadlines. From a professional standpoint, the situation isn’t too unusual: when you decide to become an artist, or more generally a freelancer, you get accustomed to an unpredictable lifestyle. As artists, we’re not always certain on when the next commission may come through or, more crudely, the next cheque. That is why projects such as ARTISTXPUZZLE are key in the support of organizations such as Artist Relief.

I try to keep an open perspective on art and allow it to be free from categorizing or defining something that is constantly changing and evolving. These are both daunting and exciting times to be an artist and it is fascinating to see how artists react and adapt.

UP Mag: What are some of your main inspirations?

HOXXOH: From the beginning and throughout my career as an artist I have always been fascinated with pictorial projection techniques. At the time there were very few graffiti artist or street artists who had evolved into these methods but one artist who paved the way for myself and I am sure many others was Futura 2000 his abstract street art; blurring virtual reality and hyperrealism with a retro-futuristic twist, confirmed my approach and inspired me to continue of this path.

Of late my main inspiration has been nature. Although I live in a city, I have made a point of taking myself away from the mix of sound; horns, traffic, alarms, and the footsteps of humans to taking long hikes, camping, and kayaking. I’m fascinated by the correlation between order and chaos that is found through forces of nature. 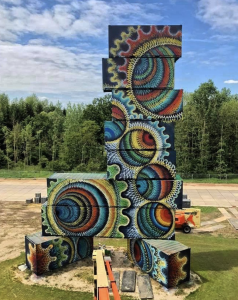 UP Mag: How has growing up/being based in Miami influenced your art?

HOXXOH: I have learnt a lot from Miami. I like challenges, playing with my creative boundaries while trying to, if not push, at least move them around. The main question of my work is how to find harmony, that moment when a pattern slips out of chaos. Then it’s about capturing that moment again and recreating that pattern through a conscious creative process. I feel this ethos has developed over the years of watching and experiencing the chaos of Miami art week, Art Basel, and the birth and rise of Wynwood. The array of artists, peers and influences that have past through the city in the first week of December and the opportunity to work with, grow with, and learn from has been invaluable. The community which has developed here, locally, homegrown which I have been fortunate enough to be part of that growth is more supportive than most cities.

UP Mag: Are there any particular spots in Miami that are your favorite to paint at?

HOXXOH: The Miami Marine Stadium. Since the abandonment of the stadium after Hurricane Andrew in 1992, it has been a haven for artists to experiment, test, and try their skillset. It became a ‘wall of fame’ of sorts. An amazing and peaceful environment that was in constant change by various artists locally and globally. 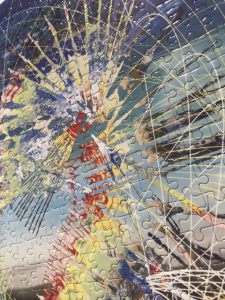 UP Mag: What’s your favorite piece you’ve done over the years, if you have one?

HOXXOH: Over the past couple of years, I have been experimenting with new automated spraying techniques using hosepipe devices and irrigation systems such as sprinklers, as mentioned earlier. In the summer of 2019, I was given the opportunity to put this method into action and my vision to fruition at the Jewish Health Centre in North Miami. Using acrylic paint and an airless sprayer the piece stretches 120ft x 40ft. And painted over the course of two weeks. This was where the technique was phrased and coined as the ‘Rainbird’. Each piece represents a moment and a process, sometimes connected to a larger whole and sometimes standing alone. The ‘Rainbird’ tool leaves its own mark and opens the door for new possibilities, allowing for nearly infinite flowing iterations.

HOXXOH’s jigsaw puzzle set is available on the ARTXPUZZLES website. Though it may be past the holidays now, an ARTXPUZZLES jigsaw set makes a unique gift for any time of year, and the collective also features puzzles depicting art from Banksy, Idris Khan, Marilyn Minter, Donald Baechler, and others. And while at the height of the pandemic we may not be able to experience Art Basel or visit the Miami Marine Stadium this year, HOXXOH’s murals can be found on his website, elhoxxoh.com