As one audience member at this week’s Industrial Grit and Graffiti screening and conversation put it, Carrie Blast Furnaces is a place “full of spirits.” That particular audience member was the last to speak at the event, and she referred to the supernatural quality of the furnace in the same breath as thanking graffiti sculptors Carlos Mare and Michael Walsh for their work at the furnaces. Mare, better known as Mare 139, and Walsh were the two inaugural artists-in-residence at an all-new multidisciplinary program at the furnace blending graffiti and metalworking.

The Industrial Grit and Graffiti residency is the brainchild of Rivers of Steel, the Pittsburgh nonprofit that gave Carrie Blast Furnaces its historic landmark designation. I have to agree with that audience member that the furnace is an eerie place. But it’s also one of my favorite places in Pittsburgh, and Rivers of Steel has made an enormous effort to repurpose a place once full of immense suffering as a community hub for education and innovation. Pittsburgh’s graffiti scene is deeply tied to the reclamation of post-industrial spaces, and within the last few years artists like Max “Gems” Gonzales, Shane Pilster, and Ashley Hodder have partnered with Rivers of Steel to create a more coherent synthesis between the two worlds. 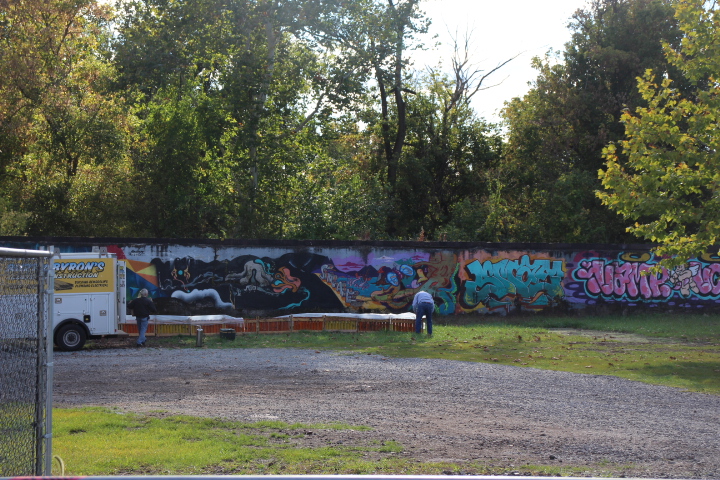 “We joke around about having similar experiences in very different places. Places that were affected by globalization. It’s an environmental trauma.”

Mare (née Rodriguez, whose moniker comes from having been a “nightmare kid”) compared the experience of Pittsburghers in the 1980s to the decade of fire in the Bronx associated with the early graffiti movement. While his childhood in New York may have been miles and worlds away from Walsh’s in the Pittsburgh neighborhood of Highland Park, there were some commonalities. “We joke around about having similar experiences in very different places,” Mare said. “Places that were affected by globalization. It’s an environmental trauma.”

Though the Bronx’s decline in the ‘70s was an intentional effort of malice by local government and Pittsburgh’s a product of a miasma of socio-economic forces, both places carried deep scars that graffiti felt like a natural suture over. Walsh added that “All of these cultures, graffiti and skateboarding and the like, come from kids taking up the wreckage of the Industrial Age, and what we now think of as normal was at the time very avant-garde.”

For anyone reading UP, the philosophical idea that graffiti is a public assertion of identity in a hostile, declining environment most likely feels like old news. Graffiti as an art form is simultaneously as old as time—anyone who’s ever hung out with the Boys from the Heights has heard the adage about graffiti’s origins as ancient caveman drawings–and constantly reinventing itself. It’s an art form born out of visceral human impulse, and that’s part of what makes it so malleable for reinvention.

What made Mare and Walsh’s conversation so different from most other graffiti panels was its focus on the multi-disciplinary aspects of the art. Though both would classify themselves as graffiti writers, they dove into the world of sculptural, three-dimensional graffiti. I have to confess, before attending this talk I had never thought about making graffiti three-dimensional. “We were making graffiti that felt like it wanted to jump off the wall,” Walsh said. And so, he let it jump off the wall and into the third dimension. 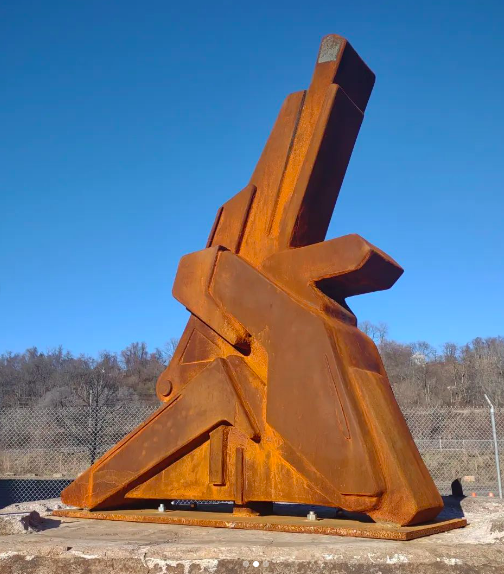 “We were making graffiti that felt like it wanted to jump off the wall.”

Both Walsh and Mare’s sculptures draw from dance and movement. Mare’s eight-hundred-pound iron casts are reminiscent of the breakdancers of his youth, and Walsh’s graffiti sculptures draw from the fluid movement of skateboarding. The movement of breakdancing is evident in the way the lines of Mare’s sculpture are both fluid and rigid, controlled and wild at the same time. And like dance, graffiti is a humanistic art form that fundamentally involves other people. “Sculpture is a team sport,” Walsh said. “I love that about these cultures, you go skateboarding with your homies and you go paint, and I’ll look at an old picture and I can still remember what it smelled like, the jokes we told, and the 40s we drank.” 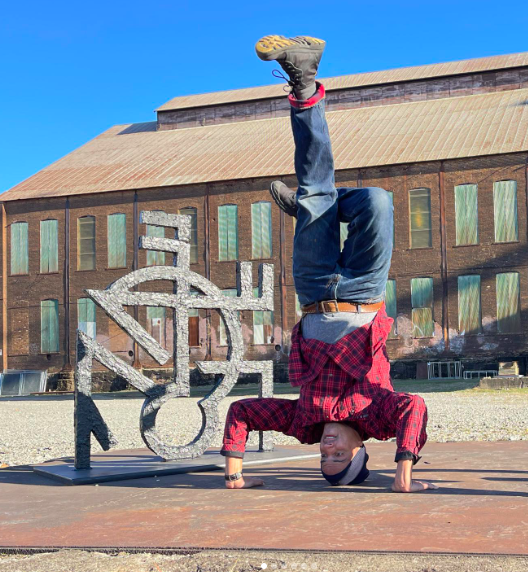 “This process made me a real legitimate sculptor. It triggered something about labor, about the hands that touch this, and the people who all helped this come to happen, it’s not just my hands on this. So it’s a different kind of respect and honor.”

Much of the conversation focused on Mare and Walsh’s personal growth through the metalworking resources at the Rivers of Steel residency. The short film Industrial Grit and Graffiti shows both hard at work in the rust-covered workrooms of the furnace, pouring molten shapes into casts and wiping sweat off of their faces. “This process made me a real legitimate sculptor,” Mare said.  “It triggered something about labor, about the hands that touch this, and the people who all helped this come to happen, it’s not just my hands on this. So it’s a different kind of respect and honor.” Walsh alluded to the fact that as an adolescent, art schools told him his graffiti was trashy and illegitimate and had no place in the same academies that taught sculpture.

“We’re in a very unique genre of sculpture and contemporary art. It didn’t exist before, not until we explored it. But more importantly, once you look at an instance of my work, my life’s work, it is a study in our dialogue with art history,” Mare continued. It was an act of kismet that the talk took place at The Andy Warhol Museum, given that Mare himself was friends and contemporaries with Warhol in the 1980s.

Both Mare and Warhol were department store window-dressers at different times, and Warhol’s willingness to befriend graffiti writers helped give an otherwise overlooked art movement more of a mainstream foothold. Warhol even went as far as to call graffiti sculpture “fabulous” and encourage Mare to put it everywhere. Though Warhol didn’t live to see social media, virtual/augmented reality, or artificial intelligence, Mare and Walsh both capture Warhol’s ethos of being curious about new technologies and how they can be manipulated to make interesting, provocative art. 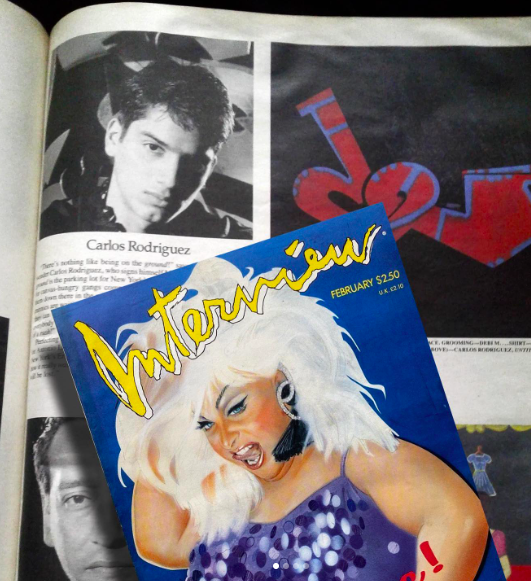 Though Warhol didn’t live to see social media, virtual/augmented reality, or artificial intelligence, Mare and Walsh both capture Warhol’s ethos of being curious about new technologies and how they can be manipulated to make interesting, provocative art.

The word innovation gets thrown around quite a lot, but one of the things I love about living in Pittsburgh is that I truly feel like I get to witness innovation. The Industrial Grit and Graffiti residency is only in its first year as of summer 2022 and judging from the public response and the quality of work produced, this won’t be its last.

“Through this program, we’re able to say, look, this is an important American genre of sculpture and making and artmaking that has deep roots, deep history. That’s why this film and this program are so important because it’s education for you guys, art lovers, to see in your lifetime that you’re seeing something important develop,” Mare said. At the very start of the talk, Walsh professed to want to “make the art of our time,” and while many have attemped that goal, his and Mare’s openmindness to new technology and thoughtful remarks convinced me that the artists of Pittsburgh are doing just that.

Emma Riva is the managing editor of UP and the author of Night Shift in Tamaqua, an illustrated novel that follows a love story between 24-hour-diner waitress and a Postmates driver. As an art writer, she is particularly interested in working with international artists and exploring how visual art can both transcend cultural boundaries and highlight the complexities of individual identity. Emma is a graduate of The New School and a Wilbur and Niso Smith Author of Tomorrow. She lives in Pittsburgh, Pennsylvania.