Taking a deeply personal art show to both New York to Portland, Oregon in less than a month is an ambitious feat, but curator Rachael N. Clark has never shied away from ambition. “Logistically complicated shows are my specialty,” she said, only half-joking. “ INERTIA • c a t h a r s i s,  opening at One Art Space in New York on 4/21 and heading to Brassworks Gallery on 5/7, is not Clark’s first bicoastal show. But its theme of grief and trauma is one she hasn’t yet explored in her journey as a curator.

“The show is grounded in my personal journey with grief,” Clark said. “I couldn’t get beyond this black, dark feeling. I thought ‘I can’t do a show about this,’ but then I decided to lean into it and see where it went.” The title, INERTIA • c a t h a r s i s, might look at first glance like a duality, but Clark was clear in her curatorial vision that the show was not a stark yin/yang dichotomy of one day being in the depths of grief and the next feeling completely healed. “It’s a non-linear journey, and I wanted to capture those days when you get a glimpse of the person you could be without that grief or trauma.” She likened it to the illustration floating around on self-help and psychology Instagram based on Dr. Lois Tonkin’s idea of “growing around” grief—the hole never goes away, but you expand beyond it. 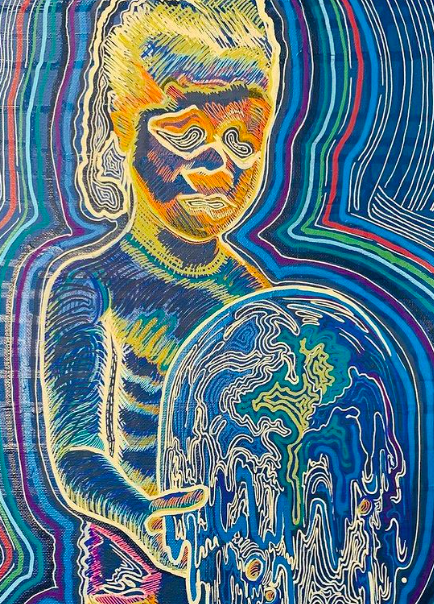 “It’s a non-linear journey, and I wanted to capture those days when you get a glimpse of the person you could be without that grief or trauma.”

Something that sets INERTIA • c a t h a r s i s apart from a curatorial standpoint is that Clark commissioned the pieces rather than selected pre-existing ones, so the show features completely unique and never-before-seen works by all of the featured artists. “I had a lot of conversations with the artists to gently invite them to dig deeper into their feelings,” she said. “But it was a delicate dance, because you want to be careful with accessing difficult memories.” So often conversations about grief turn into stream-of-consciousness venting that dump out the trauma and sadness in disorganized ways. Though venting has its place, INERTIA • c a t h a r s i s is a more careful kind of vulnerability that comes from processing and exploration.

One of the things Clark wanted to explore was selecting artists whose work doesn’t always have a personal bend to it. “I wanted it to be a more individual level, and I specifically envisioned stuff that wasn’t just sad people wearing masks,” she explained. Instead, she wanted to create something that had a strong emotional core and allowed the artists featured to explore loss of parents, divorce, and collective trauma through their own unique artistic perspectives. “It’s a tapestry of grief,” she said. Featured in this tapestry are prominent street artists like IndividualActivist, Chris RWK, and LeCrue Eyebrows.

Chris RWK has been open about his experiences with loss, and grief and mourning appear in his work, but the robot figures in his art require viewers to look at it more closely to see the emotion in it. IndividualActivist’s work speaks to wider social causes and calls to action, but Clark hinted that for this show, she put together something with a different angle. 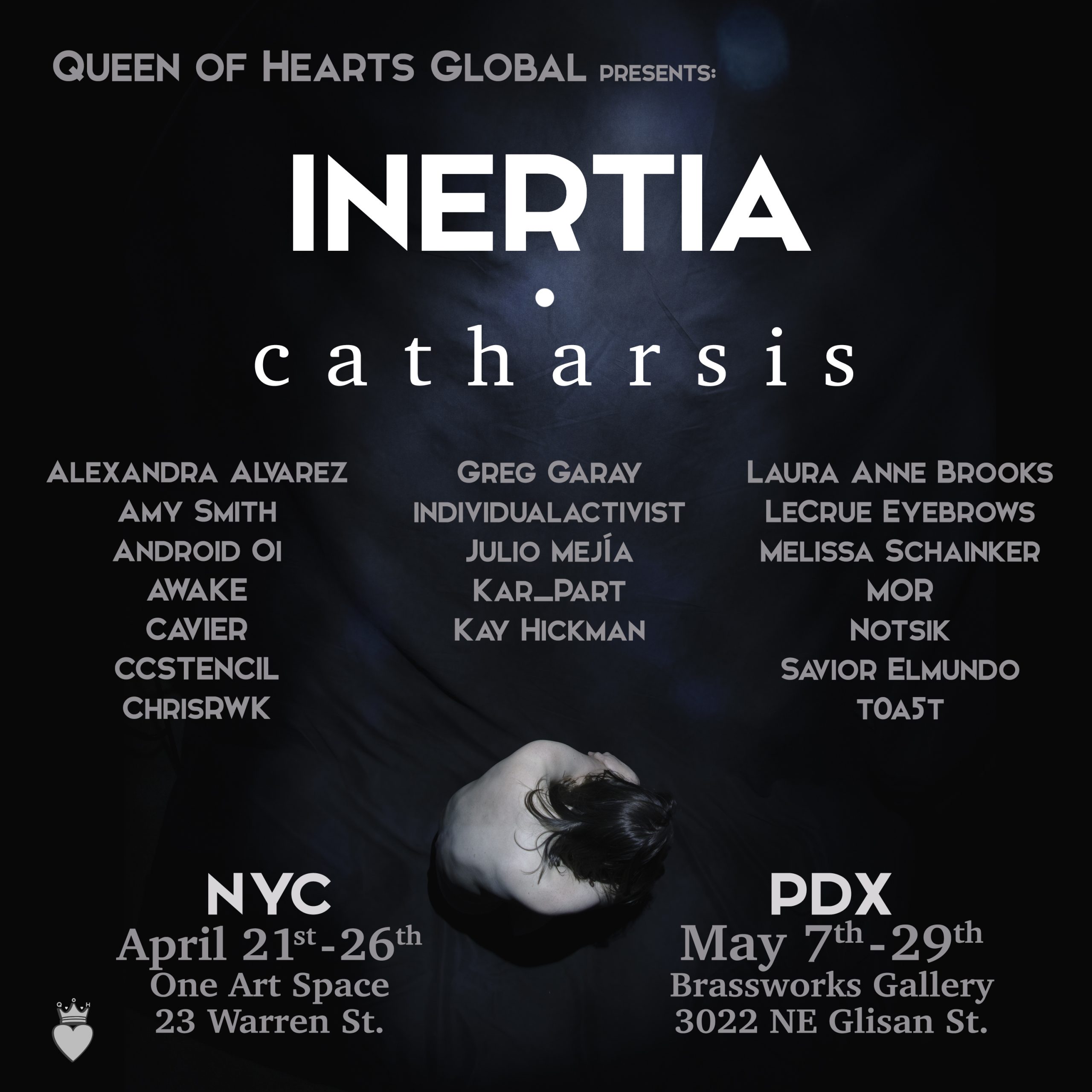 “It’s a tapestry of grief.”

Both Chris RWK and IndividualActivist’s portfolios are full of bright, bold colors that don’t immediately line up with a darker show. But part of Clark’s concept is an exploration of the ways grief and trauma don’t make sense. The title comes from the scientific concept that an object in motion stays in motion, but the less-quoted inverse of that is that an object is not moving, it can’t move. Catharsis speaks to the slow build-up of healing over time and the complex nature of reclaiming your happiness after a loss.

“The last few years have been so emotionally burdensome,” Clark said. Burdensome felt like an apt term for collective experience of what some psychologists call “ambiguous loss” that weighs each of us down in a world changed dramatically from what we expected it to be. We understood our lives to have certain rules and standards to them, and that the trajectories we were on were infallible. COVID-19 created a web of confusion that made dealing with personal losses—whether heartbreak, the death of a loved one, or financial or educational hardship—immeasurably more difficult. INERTIA • c a t h a r s i s’s concept’s emphasis on motion highlights one universal fact about grief and trauma: no matter what happens to you, you have to wake up the next day and deal with it. 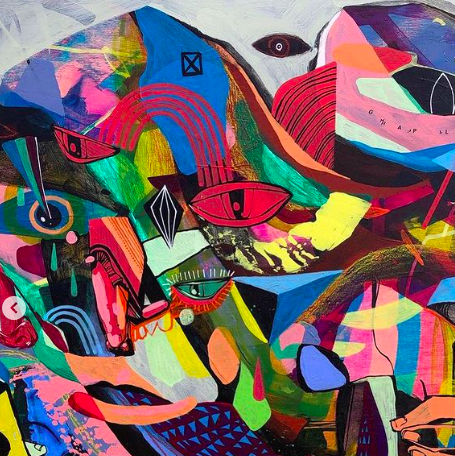 “Art has a power to foster community and create healing.”

Collective grief can feel overwhelming, but the collective experience of viewing art creates a more positive shared space to explore complex emotions. “Artists are gifted in being able to express what we can’t say in words,” Clark remarked. “Art has a power to foster community and create healing.” One of the things I’ve been most fascinated by in my own career as an art journalist is that intangible power works of art have. A work of art’s power comes from a multi-faceted dialogue between the viewer, the artist and the world around both, and now seems like the perfect time for a show focused on crystalizing that power. INERTIA • c a t h a r s i s promises not just to be a gallery show, but an immersive experience with a full roster of events.

The show opens at One Art Space in New York on 4/21 at 6PM, followed by an artist panel on 4/22 at 7PM. On 4/23, the show will host a short film screening and a performance by Prolific Wone. Finally, on 4/24, Clark will be doing an Instagram Live “Artsy Sundays” talk with Peruvian entrepreneur and curator Brenda Ortiz-Clarke. The show is open from 1-6PM every day for public viewing. Viewers can then follow the show to the Pacific Northwest for its debut in Portland, Oregon on 5/7. INERTIA • c a t h a r s i s’s bicoastal concept isn’t just an ambitious curatorial endeavor for Clark, but a statement on the show itself: That no matter where you are in the world, art is a universal language to explore the griefs we all have to heal from.