UP5 Preview - Portrait of an Artist: Jeff Henriquez

I still remember the first time I saw the work of Jeff Henriquez at a 2018 show in Newark, where I stepped up to look at a canvas featuring a typical NYC mailbox alongside another canvas that looked like a snapshot of a subway station entryway. I assumed they were both canvas printed photos until I stepped closer, only to be surprised by light reflections of detailed paint strokes.  This was his intention, as is the general intention of hyperrealistic art; to allure the viewer with an initial impression of a photo-quality detail, executed in skillful and minute details. I had never heard of Henriquez before then, but I followed him on Instagram immediately to see more of what his portfolio contained.

In our interview, Henriquez explained, since the age of six, he was always that kid who could draw.  He solidified his start as an artist after taking 2nd place in a school art contest.  The son of immigrants from the Dominican Republic, his father a pre-Colossal billboard painter and his mother a seamstress, the influences on his artwork and work ethic surrounded him at home. “I get my work ethic from my mother, she was the hardworking one in the family,” Henriquez mused. He had a propensity for copying images, which became evident in the things he would recreate.  He started out with his cousin Gringo’s detailed Dungeons and Dragons drawings, then followed that with horses from a book given to him by his mother’s friend Gladys. At age fifteen he attended vocational school and picked up skills with woodworking, varnishing, and refurbishing furniture.  But it was painting houses that got him accustomed to working with clients at an early age. 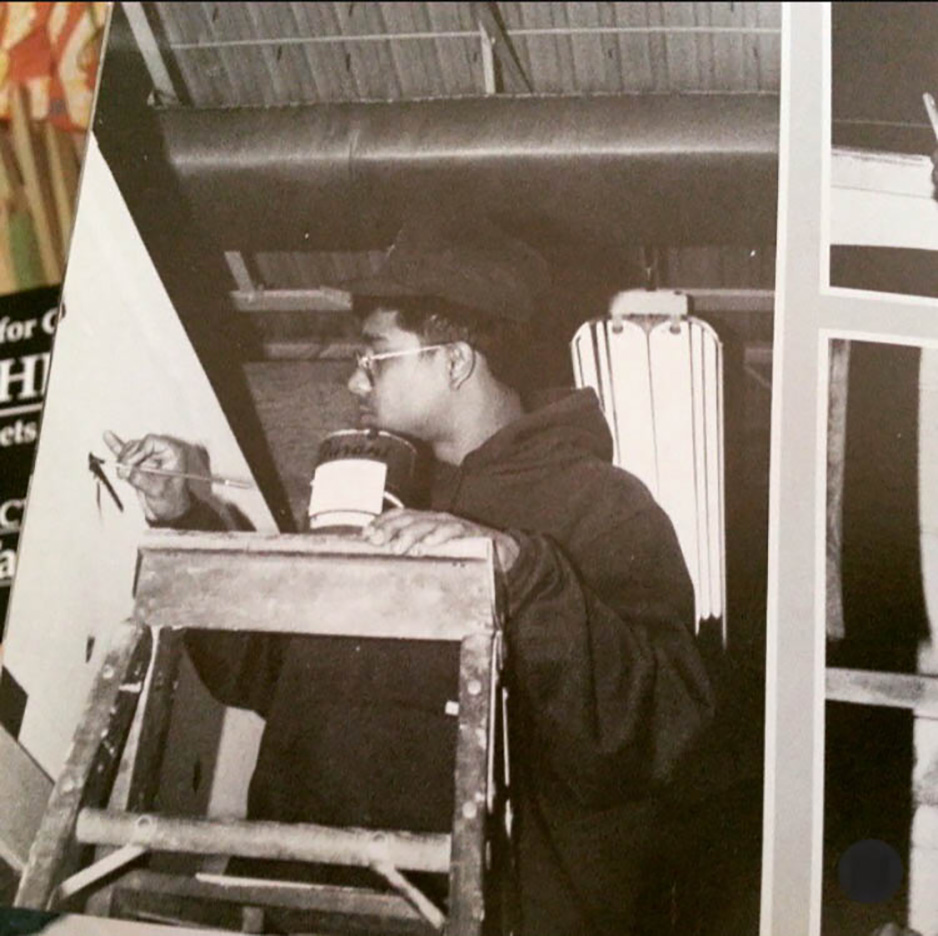 Born and raised in Lynn, Massachusetts, Henriquez didn’t really feel like there were many opportunities for him to grow and flourish as an artist.  He tried his hand at graffiti when he was younger, but after an arrest and a stern warning from his mother, he decided to take the streets home rather than going out to the streets. “It didn’t need to be illegal. You know what it’s like seeing your kid getting walked out in shackles or getting a phone call from a police station?  I was fifteen years old, I didn’t want to put my mother through all that stress. So, I let it go,” the artist explained.

Back in 2005, he left Lynn at age 30 to head to Saint Petersburg, Florida to live close to his sister and her children. She passed away unexpectedly a few years after he arrived, which turned his life upside down. Despite his landlord accepting two paintings in exchange for three months’ worth of rent money, he lost everything including his brick-and-mortar gallery and his apartment in the midst of the 2008 stock market crash.  Feeling like everything around him was failing, he made the decision to leave Florida altogether.

Jeanelle Folkes is an NJ based love and lifestyle photographer, and owner of Jeanesque Photography.  Born in NY and raised in NJ, she was always drawn to graffiti, but started consistently shooting street when she discovered her love of wandering city streets locally and internationally.  She currently writes for ThirdRailArt and UP Magazine, and contributes photos for Shooters Street Art. When she’s not shooting, she loves baking her delicious soft baked cookies.