Say the name ”Trullo” to a Roman, and the majority of them will simply shake their shoulders as if they were replying ”what do you mean?” As a matter of fact, the Trullo neighborhood in Rome has never really had “a name” in the public Roman opinion. And if it did have a name, it was not – to tell the truth – a very attractive one.

The Trullo-neighborhood is one of Rome’s 12 so-called borgate, townships. It’s covers about 6,2 km2 and counts something like 28,000 citizens. It’s sited in an area between Via Portuense and Via Magliana. In fact, when you hear the word “Magliana”, you will immediately think about the “Magliana gang” which used to be a look-a-like small-mafia gang that operated in Rome in the 1980’ties. This is, of course, also a social metaphor, because for many years the Trullo quartier has been regarded as a symbol of poverty and social decay.

The construction of the neighborhood start in 1936, and at the time a totally different name was chosen, Costanzo Ciano. When the fascism was defeated this name was changed to Duca d’Aosta, and then in 1946 – after the referendum where the republic was chosen instead of the monarchy – finally the name Trullo was decided. This curious name came about due to the fact that the only important cultural heritage in the area was an ancient Roman tomb, sited on a mound, which was called Trullo dei Massimi. This was, in fact, the only important reference point in a vast area which was especially marshy and unhealthy.

Trullo is not exactly on top of the list about Rome’s most important tourist attractions. Yet, in recent times quite a number of art-loving Romans have decided to visit the neighborhood.

Because a way to defeat social decay is to try to create art and beauty that together, as regards quantity, goes beyond. In this case art and beauty means street art and poetic beauty. In recent years this has been practiced elsewhere in Rome, that has long turned out to be not only Italy’s capital but also the Italian capital when it comes to street art. To defeat poverty and social decay many street art projects have been successfully realized in Rome over the past years. This has been seen in places like Tor Marancia, Quadraro, Corviale just to mention a few of the city’s peripheral areas. And now also in Trullo. 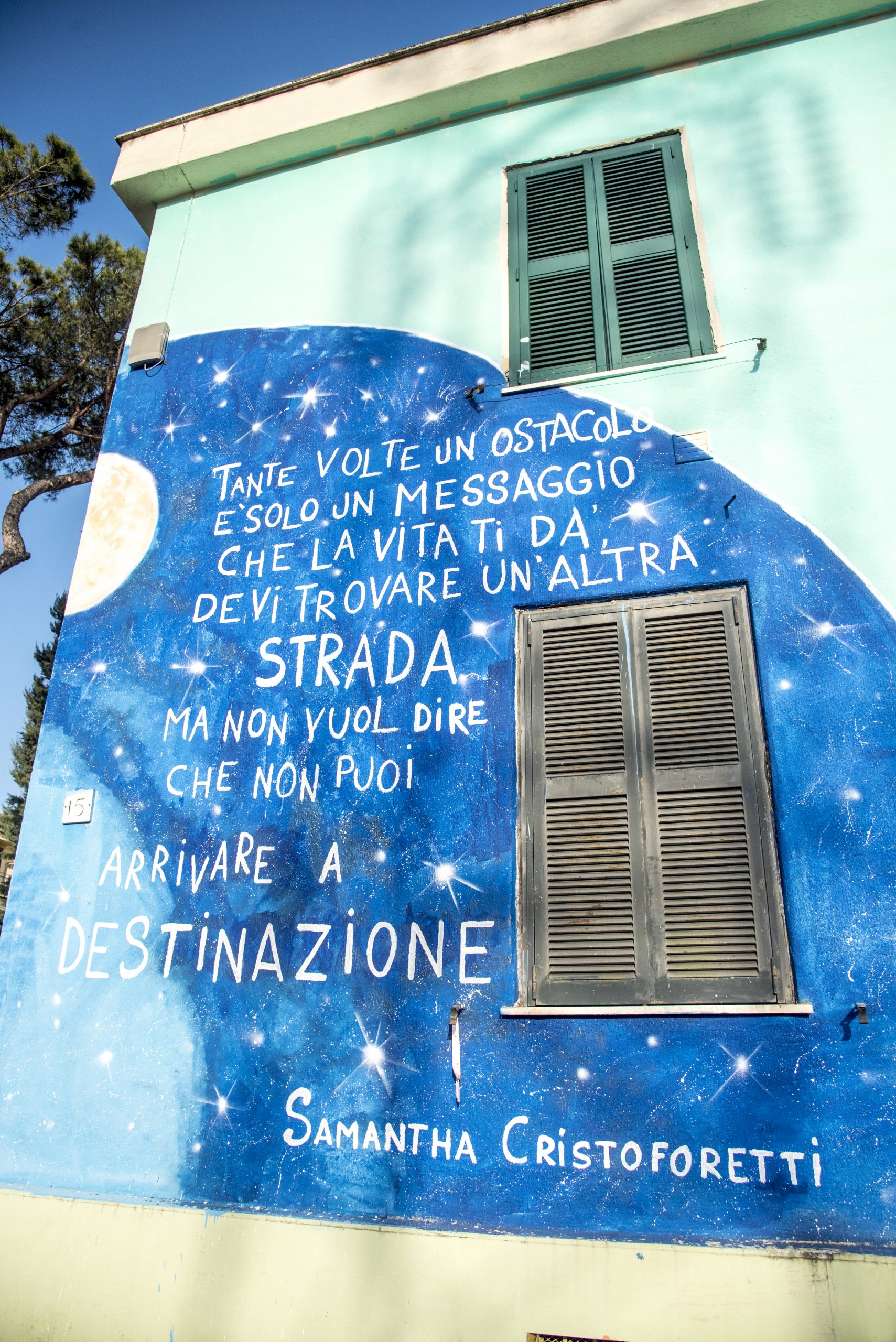 They define themselves with a neologism – metroromantici – urban romantics. To these poets poetry is a way to look upon the world, and to reflect their vision onto the walls of the quarter.

Colorful and artistic paintings – called murals in Italian – have found their way to Trullo. Some of the authors behind al that screaming beauty is the street art-collective called Pittori Anonimi del Trullo, Anonymous Painters from Trullo. Here and there they have had assistance from another collective, which are used to play with the words, I Poeti der Trullo, the Poets from Trullo. They define themselves with a neologism – metroromantici – urban romantics. To these poets poetry is a way to look upon the world, and to reflect their vision onto the walls of the quarter. You’ll find their poetry, sentences, phrases on walls, doors and the shops’ gate valves.

The first impact I get is a rather strong one. It’s in Via del Trullo where I find the two extremely popular and late actors Gigi Proietti and Alberto Sordi hanging on the same building, only separated by a corner. I guess they have been telling each other funny stories for quite some time.

As I walk along the Via del Trullo I feel somewhat observed. And this is actually not strange. In several places I come across female faces that seem to be looking curiously at me, as though they were saying “Hey, where are you going”? And again, also in Via del Trullo, you’ll find the entrance to the local fruit and vegetables market, marked by beautiful blue-red writings.

I turn around a corner and see a new painting. Two young kids are kissing each other tenderly next the words: “We are made of the same material that dreams are made of”, allegedly and quote of Shakespeare. And not far from there I come across a wall where no less than three works are fighting to conquer the by-passers’ attention. I think the winner must be the large and several-meters-high work of the well-known street artist Solo, who is present on several walls at Trullo.

Quite rapidly, as you walk around her, you’ll find out that this is a reign of brushes, colors, ladders, drawings, creativity and craftsmanship wherever you choose to turn your eyes. And all this actually has a sense. Even a higher sense. Because all of a sudden there is a connection between the neighborhood and its inhabitants. All of a sudden Trullo has transformed its grey and negative and half-dangerous image into something far more appealing. Something to be proud of … “the place with all the colorful wall-paintings”. This is definitely a place where you could talk about social revenge that passes through artistic performances.

The walls are talking and whispering to me

I see colorful stairs and next to them a wall with an even more colorful bird. Newly washed laundry is hanging down from several apartment windows as though the laundry’s colors were trying to overcome the colors from the works of the various street artists.

As I move on I’m almost “frightened” of looking around the next corner, as though an internal voice was telling me: “be careful, some new beauty is now approaching, prepare yourself”! 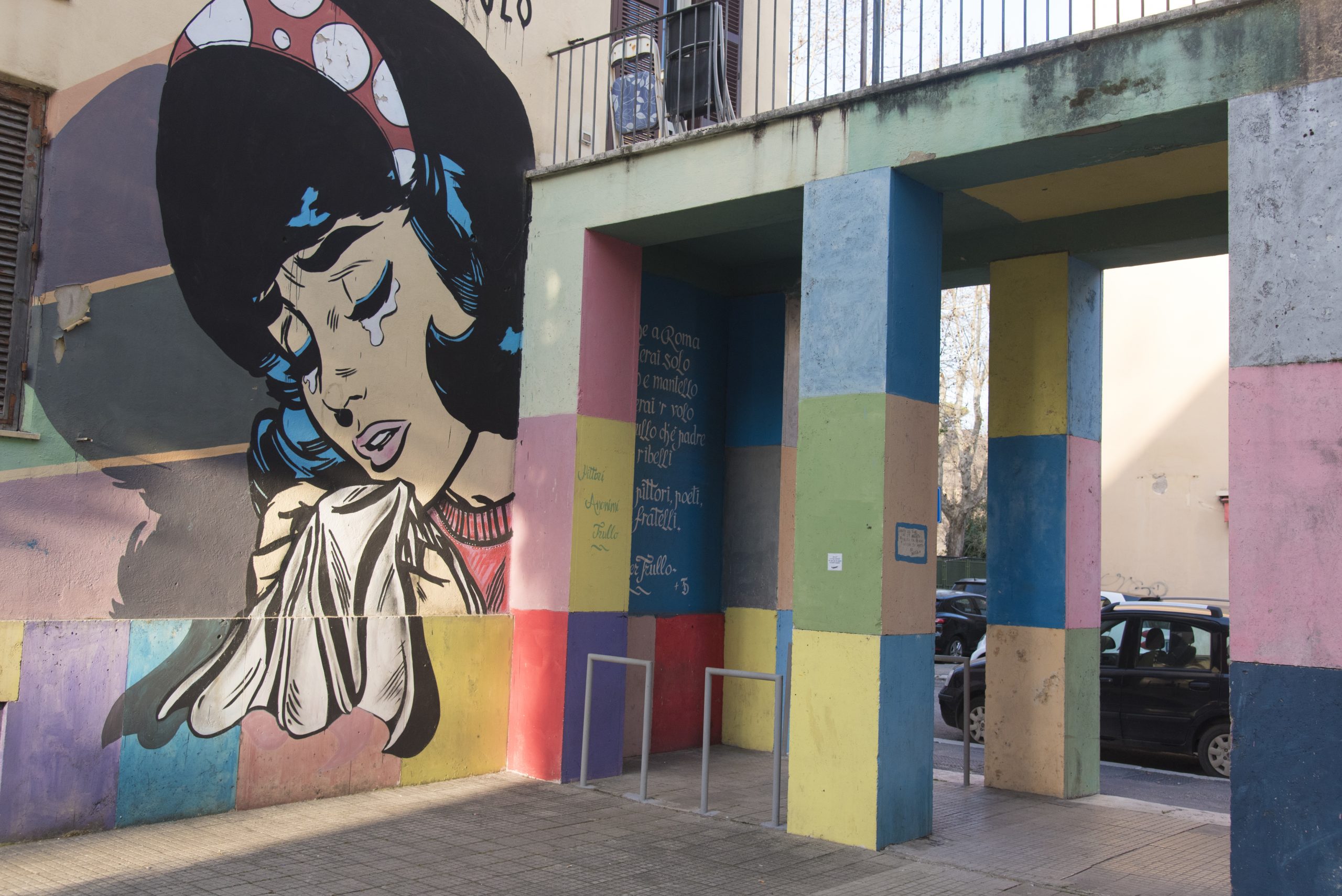 As I move on I’m almost “frightened” of looking around the next corner, as though an internal voice was telling me: “be careful, some new beauty is now approaching, prepare yourself”!

A flabbergasted cow is starring at me. A young girl seems to be offering me a red apple, and suddenly I’m facing the female Italian astronaut Samantha Cristoforetti, who tells me: “Many times an obstacle is only a sign of life telling you that you have to find another way. But is doesn’t mean that you will not be able to reach your destination”. And as I move on and carefully look around the next corner, my eyes gaze upon the young Swedish environment activist Greta Thunberg, who seems to whisper to me “You’ll never be too small to change the world”.

The neighborhood’s new artistic identity is definitely strong, and it’s a proof that beauty is able to put you into a better daily mood. Well, just look at all these colors!

Famous women communicate across the street

On the other side of the street, in Via Ventimiglia, I come across a giraffe. Well, actually a rare so-called black giraffe with an important message. The writer Moby Dick has a strong environmental calling, and in this case his message regards a real life incident, when an American female hunter once killed a black giraffe only to brag about it on the social media. The art of work obviously wants to give a voice to hunted animals. As a little detail you might notice a role of money in front of the giraffe’s mouth, as a symbol of greed.

I move on and just around the corner, in Via Brugnato, I’m caught by surprise and wonder. The well-known popular Roman singer Gabriella Ferri is adorning a huge wall, and perhaps she’s trying to communicate with an even more famous female figure, Mexican painter Frida Kahlo, who has been immortalized on a beautiful pink wall on the other side of the street. To strong women. 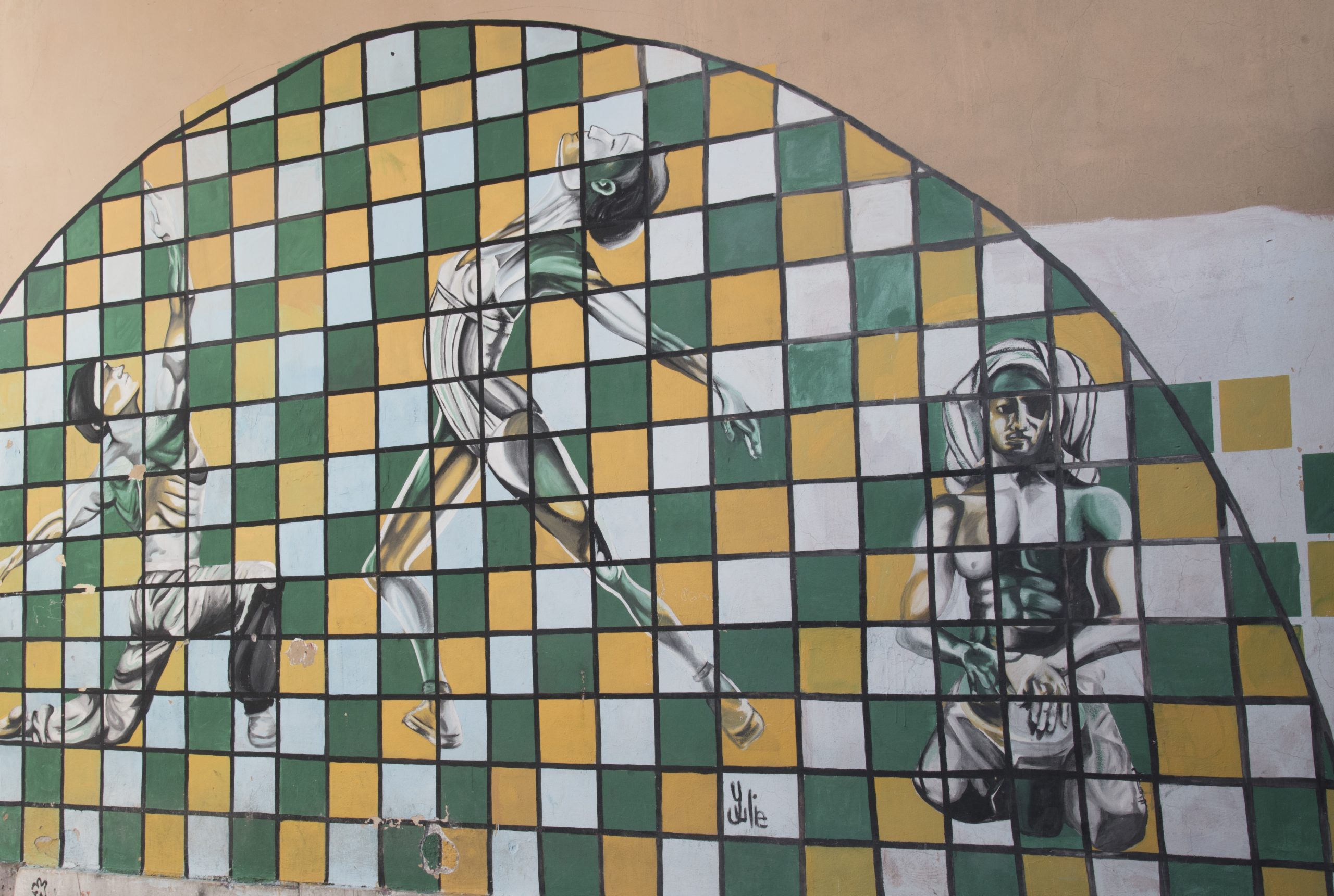 Here, at Trullo, the right way to walk around is by pausing now and again, contemplating, admiring with a curious spirit, with your eyes wide open and then reflecting on what you see.

I still need to see several other works of art even though I have walked around for about two hours. I’m in a sort of state of grace. So much art. So much beauty, concentrated in just one neighborhood. My next discovery is actually casual, because I had forgotten all about the icon image of Solo, called Nina. It’s only when I lay eyes upon this absolutely wonderful image of a crying Nina, that has something vintage-American-50’ies-spirit over her, that I remember the fame of this wall-painting. In the same moment a young mother is passing by the image with her son. They stop below a second-floor window, where the child’s grandmother is looking out. The mother tells her son “have you seen granny up there? Say hello to granny”. And they – granny and her grandson – greet each other, as I think “what a wonder to open your apartment window to the world, and right there, ten meters in front of you, you’ll see the colorful and poetic crying Nina”. So much beauty that you almost feel like crying yourself as you contemplate Solo’s art explosion. 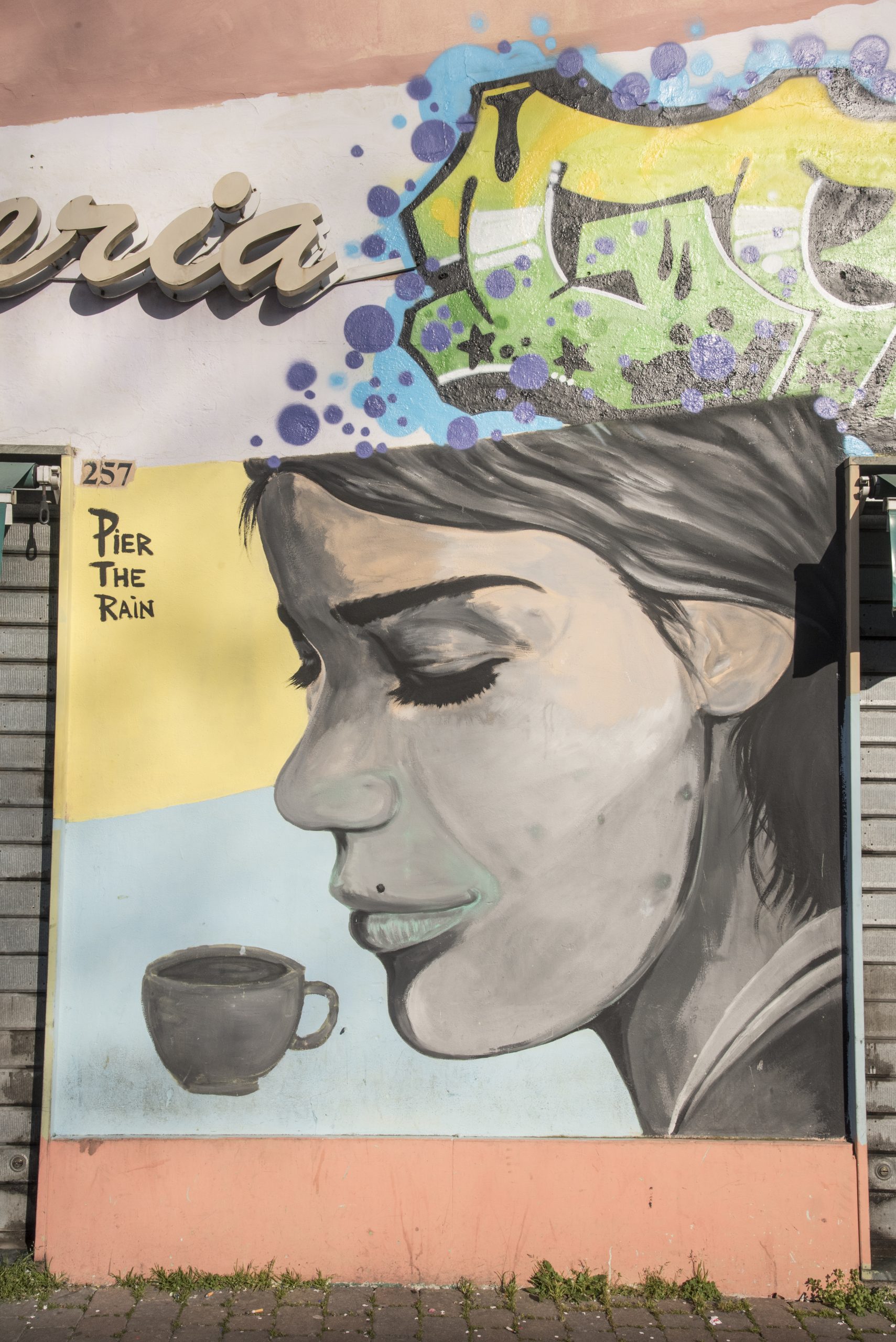 So much beauty that you almost feel like crying yourself as you contemplate Solo’s art explosion.

I’ve have been walking from one artistic peak to another. Placed around the Trullo neighborhood like pearls on a string. Another peak in the neighborhood is the Cucco Mountain. Here a famous scene of the Pierpaolo Pasolini film Uccellacci e Uccellini (1966) was filmed.  Recently the wooden staircase has been repaired, so I start to go upwards. It’s late afternoon. The sun has finally decided to make space for the darkness. A last soft light seems to be sweeping over Trullo. It’s a strange light that seems to be mixing brown and grey. I shoot a couple of pictures before going back down, as I start to feel more and more embraced by the darkness.

But that’s obviously how it is here in the Trullo neighborhood: it takes only half an hour to draw a fine line between an incredible color splash on one side, lit up by the Roman daylight, and a surprising darkness, which seems to be arriving in just a few moments.