Januaury 23rd was a cold Saturday evening, when I began my usual trek home to the Bronx on the 6 train from work. That night however, included an exciting detour. A visit to the acclaimed South Bronx gallery, WallWorks New York, to see their first exhibition of 2021, JM Rizzi Cause and Effect, on view through March 3.

Many people do not take the trek to the Bronx. Unlike Brooklyn, where gentrification and hipster-fiction has taken over every aspect of the landscape, the Bronx still has that old school New York feel. Most New Yorkers don’t even realize there is an Express 6 train! (Don’t worry if that terrifies you, the local and express 6 will both stop at 138 street). Once you pass 125th Street, your surroundings become a little unpolished, a bit more relaxed, and community is still a word used unironically. There are no designer stores, no fancy eateries, just warehouses, bodegas and apartment buildings.

Once you pass 125th Street, your surroundings become a little unpolished, a bit more relaxed, and community is still a word used unironically. 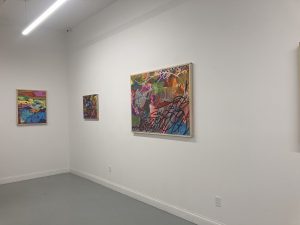 Which is why it is no surprise that WallWorks New York, a contemporary art gallery with a street art/downtown focus, founded by iconic Graffiti artist CRASH and entrepreneur Robert Kantor, decided to make their home in the South Bronx.

Back to my journey; once exiting the 3 Avenue-138 Street Station I met up with my boyfriend, and we made the chilly, but thankfully very short walk, to WallWorks New York. I will have to say in this day and age when the subways are half-filled and the streets feel dark and ominous, it was with relief I realized how close the gallery is to the subway station. After a brisk 5 minutes’ walk, passing the relics of old New York, we found the door located next to a colorfully spray-painted gate.

When you get to the space you can’t just walk right in. In the before times [aka pre-COVID19], this may have been an annoying inconvenience. Getting to the gallery, buzzing, waiting for someone to let you into the first-floor space. Yet, while this feature was most likely added originally for extra security, it now feels reassuring.

After being let in, we walked down a hallway with large, spray-painted murals, and soon encountered the gallery space entrance to the right. The space is small but inviting, with the walls expertly curated with JM Rizzi’s, otherwise known as JMR, rainbow-bright colored spray-painted collages. 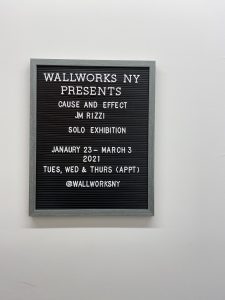 At the entrance of the space there is a bench, currently filled by the artist and visitor, where you can sit and take in the show. Immediately to your left is a desk and against the wall refreshments, in this case water and small cans of Pepsi, available for you to take. People are already in the space laughing and chit chatting, admiring the cheerful works on view. Looking around I can’t help but be reminded by gallery director Anna Matos’s reflection from the Press Release, “Art has always been what people go to as an escape and as a way to try to understand the world. Now more than ever, we need art to help us escape and understand, to help process what we are currently going through together.”

From a distance, JMR’s works look like cut-out sections of a graffitied wall. The layered process feels similar: advertisements for a new product pealing, layered by posters from some-long forgotten concert, partially teared tickers, and overlaying it all is graffiti. The weathering of the advisements, the tearing, the inevitable covering by posters of new events and news, at times looks so beautiful artistic you wondered if it was planned.

The weathering of the advisements, the tearing, the inevitable covering by posters of new events and news, at times looks so beautiful artistic you wondered if it was planned. 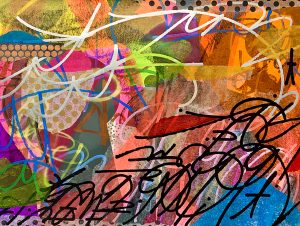 However, upon closer inspection I realized it is not sections from a wall that are framed, but instead canvases covered with swatches of colors, collaged and layered, torn and drawn on, cleanly framed in tight plain wooden frames, with thin lines graffiti. JMR’s works are reminiscent of the street art I previously described. But instead of dirty, fraying beauty, I instead am looking at a cleaner, a slightly more cheerful, more sanitized version.

This is seen strongest in his work Tangerine Smile, 2020, collaged with warm yellows, oranges, sunset colors, and signature graffiti figure overlaying, smiling booking up. The colors are torn and assemblage, screen printed on top, and torn in the right corner peeking out, delicate steams with pink flowers. The harshness of the spray-painted figure is softened by the entire set up of the work. The deliberate collaging, warm and inviting, the purposely placed screen-print of the flowers. Even the upward gazing smile of the figure. The word ‘sweet’ comes to mind.

The harshness of the spray-painted figure is softened by the entire set up of the work. The deliberate collaging, warm and inviting, the purposely placed screen-print of the flowers. 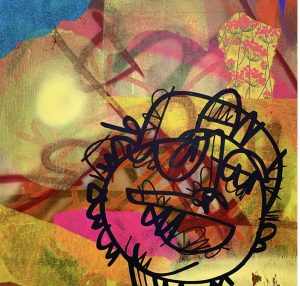 After doing a walk-through of the show, and of course after the kind Anna Matos pointed him out, I make my way over to JMR to introduce myself. JMR, a Brooklyn-born, Dallas-based artist, is tall in his mid-forties with a welcoming demeanor. His works reflect his upbringing—evident exposure to the stellar street art of NYC—while also calling attention to other side of the city; the glamour, the fashion, the refined. 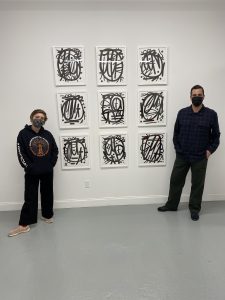 His works on view, even his most ‘spontaneous’ line sketches, are elegantly framed in a grid pattern, carrying a certain fashion sense. Street art made upscale.

When discussing his works with me, he admitted that the street art wall aesthetic is something he is influenced by. However, what is surprising is that he readily admitted  he is also drawn to the Abstract Expressionist Movement. He referenced famous abstractionist artists like the female painter Helen Frankenthaler (1928-2011) and the abstract mixed media cartoonist Romare Bearden (1911-1988).

I have to admit that I was surprised by his inspirations but looking at his works the parallels seem so obvious, that I wonder how I didn’t think of them myself. This influence is most apparent to me in my favorite work, Southern Sol, 2020. The warm rainbow with a rust-colored tagging overlaying, JMR and I agree that it is reminiscence of a landscape painting. For me, specifically, a New Mexico sunset.

In the Press Release, JMR reflected: “The body of work in this exhibition was created with the concept of Cause and Effect… This is reflected in the process, allowing the pieces to inform the next addition, brush stroke, gesture, composition, etc., based on the previous action.”

JM Rizzi’s work does reflect a type of choreographed cause, his work imitating street art. The planned effect is that we the viewer leave with a new appreciation and understanding of street art and fine art. He satisfied this aim, and I can’t help but leave the gallery feeling warm and smiling into the cold night.