Spiritual Communication: The Message of JoDo the Bee

Author’s Note: Due to sensitive information about the artist’s personal life, certain details have been deliberately obfuscated to protect the identity of the artist at their request.

You may not realize it, but you’ve seen the bee. There it is, scribbled on the back of a subway door. There’s another, spray painted with quick hands down a side street. Then there’s one you think you’ve seen, a colorful mural. They’re across the world.

The bee seems to be communicating with you, but you’re not sure what to says, only what it feels. A quiet humming, a spiritual message.  The bee is named JoDo, the work of an enigmatic graffiti artist.

Recently, the artist and I met to talk about the upcoming occasion – the third anniversary of when the bee took flight.

JoDo the bee is a communicator – a symbol of the power of repetition. Every time the artist goes out and paints, it’s like a performance, a ritual intention that manifests into wings and eyes. Graffiti artists are the ones who wonder and wander by night, scrawling their symbols on the city walls. And among the many, JoDo the bee stands out as one of the most iconic tags in New York.

The Birth of JoDo the Bee

The creation of JoDo the bee was a path of twists and turns. Raised in Mexico City, the artist moved to New York and took an interest in graffiti culture while walking through the streets of the city.

The artist connected with others through Instagram, and began to be involved in the community.

The artist’s first group show was in the LES, which included two of his pieces. One was a social commentary on Caitlyn Jenner [who at the time was transitioning and all over the news.] The other piece was the heart of a squirrel in a crystal bell, which symbolized “the spirit of communication.” The artist was always creatively inclined, but had kept their work closeted, reluctant to share it with the world.

“This self-reflection prompted him to realize he needed a recognizable symbol that people could connect with.”

The artist realized that people did not understand his message. This self-reflection prompted him to realize he needed a recognizable symbol that people could connect with.

“The day I needed a symbol, I began to think: who am I, and what represents me?”

A childhood memory surfaced. 11 years old, a shy kid at a new school, he sat on the far side of the playground by himself. As he sat alone eating a sandwich, he watched a bee fly near him. The bee looped around him, flying in circles, until suddenly, it died.

“That moment speaks about me, being away from the people, just watching.”

The artist began to make sketches, crafting different styles of bees. He played with the anatomy, testing different wings, shifting angles. The artist filled a book with sketches until he came to the right design.

For his work, he needed a name, an identity. So the artist signed the art, ‘JoDo.’

The artist explained, “I thought it was perfect. It was short. It was nice.”

On Friday the 13th, November 2015, there were several terrorist attacks in Paris.

When the artist heard, he thought “this is terrible!”

He felt he needed to do something. The artist painted a canvas of the French Flag, with the bee in the middle. The artist intended this as a spiritual protection for the French people.

Later during a show, a local street art photographer, came in and bought the piece.

The artist was ecstatic.

“It was the first time a collector bought my work, which dignifies the art.”

Graffiti and the Bee Swarm

“The understanding I had of Graffiti was from Mexico in the 80s, 90s… Leaving a mark. To me, it was like a warning, don’t come into that territory. I didn’t know. I was just a child.”

Like many, his initial impressions of graffiti were linked to crime and vandalism. However, his eye for aesthetics and observing nature led him to the streets.

“I knew there was something beautiful capturing my eye in the street, no? Graffiti or any other kind of expression. It’s beauty.”

The artist went home, cut some bee stencils, and hit the streets. The winter snow had set in, but the artist was determined. As the blizzard came down, he went around the LES, painting pink bees. It was his first step in the graffiti journey. Although years have passed, many are still there.

The artist developed a taste for getting up. He met with Lansky, who created homemade mops. He would buy the markers on the low, the transaction with the furtive nature of a drug deal. The artist began to meet fellow graffiti artists, learning about the community.

Overtime, the artist star adopted and incorporated more tools into his repertoire.

“It went from mop to spray. Lately, the bee has gone from spray, to big spray! My dream is to make big things on big buildings.”

The artist took a trip to Russia. He arrived in St. Petersburg ready to paint. When he landed, he messaged the Russian graffiti network, looking for a local to help show him the lay of the land. He messaged over 20 people, until graffiti artist ACAP responded.

When they met up, ACAP brought cardboard and cutting materials and the two got to work. Late in the night, they made their move.

The artist and ACAP went down the city’s main boulevard, a street cluttered with hotels. They crept into a back alley, where ACAP pulled out a bolt cutter. The vandals cut their way through a fence and snuck into a building, making their way to the roof. There they worked quickly.

As he learned to graffiti-bomb, he picked up the basics. Stay quiet, stay smart.

It was the Russian summer, and the bright white night left them exposed. ACAP pulled the artist back when he looked over the edge.

“If you can see them, they can see you.” ACAP warned.

When they went to leave, ACAP realized the artist had left the spray caps on the roof. ACAP cautioned that they needed to go back and get them – the FSB is known to finger print evidence. Crime is dealt with harshly in Russia.

“Every time you go out painting with somebody, you learn something new.”  The artist explained. ““I paint by myself, but it’s always fun to have someone to play with. You have more motivation, and it’s safer.”

As he learned to graffiti-bomb, he picked up the basics. Stay quiet, stay smart.

While in Russia, the artist got up around town. On a solo expedition, the artist went to the edge of the city, painting in abandoned soviet buildings. He met a few other graffiti artists and got a spot in the Moscow Hall of Fame. [A Hall of Fame in graff culture is where one can paint without fear of being arrested.]

Over time as the artist flew in and out New York City, he left bees wherever he visited. In Spain, he left bees fluttering along walls. In Miami, bees flew around Wynwood. In his homeland of Mexico, he painted Mexico City and all over Playa del Carmen on the Caribbean coast.

As he traveled, the artist made friends in cities around the world, earning his place in the community.

The Meaning of the Bees

“In the beginning, it was like an oath to my family. In the years I’ve been painting, it’s taken on its own personality… I guess at this point the people’s perception is the thing that has changed. They see it more. They tell me things.”

Meaning and perception are strange things, subject to individual interpretation. Yet, our self-narratives become validating. When the artist chose the bee to represent him, other memories came forth. One was of a trip through Vatican City, where he saw the crest of Pope Urban VIII, a coat of arms made of 3 bees. The sculptures he created are stamped with a bee.

Another recollection came from his time spent working with the Mayans in Mexico. The artist was working in the jungle, near the ancient ruins of Coba, which means “Muddy Waters.” At Coba, the highest temple Nohoch Mul, was created as a shrine to communicate with the heavens. The god of the temple is a bee.

“I put those memories together. So I was like, maybe a bee.”

Prior to the bee, the artists other works also dealt with themes of spiritual communication. One of his earlier projects revolved around painting with tarot cards. Another was called ‘Beautiful Numbers.’ The idea was to capture numbers that carried an inherent beauty, thus possessing a communicative power. For example, the popular wish time, 11:11.

“I wanted to use media, that was used as communication between humans and the spiritual world.”

“I called my art since the beginning, magic art.”

“I make the bee with an intention. The intention is the communication. From the spiritual world, the dreams, from god knows what.”

The artist relates the creation of the bees to the way a religious person might worship a spot they believe to be special. Even if the place isn’t inherently significant, their belief in its importance manifests a level of spirituality in that place.

“With intention, any place can become spiritual.”

Memory, Existence, and an Anniversary

“One day I’m going to be dead. But I want the bee to be a reminder that I was here. A reminder to the people that I exist.”

“Me? I’m gonna die. And I want to be remembered. … In graffiti, they say it never dies, it just fades away. Every time I see some spot got buffed, or someone battered my bee, I just try to go back and respect it, no? I treat it with a lot of respect. Almost like it’s a person.”

“Each one of these that I’m making is coming only from me — from my hands, from my heart. Each bee is one bee by itself. But all of them, they are a swarm. I am creating them as they go.”

The artist reflected on his experience within the graffiti community.

“What can be more intimate, than the walls of that same city, speaking to you about your friends? The sentiment that I belong to something.”

The bee is a symbol of the artist himself, of his presence. When he goes out to paint, he faces real risks to make his presence felt.

“It is a moment that I put on the line, everything that I have.”

But for the graffiti artist, the risks are worth it. The bee means many things. It is a relationship with the graffiti community. It is a spiritual communication with people in the streets. It is a symbol, made more powerful in its repetition. The bee is JoDo and JoDo is the bee. 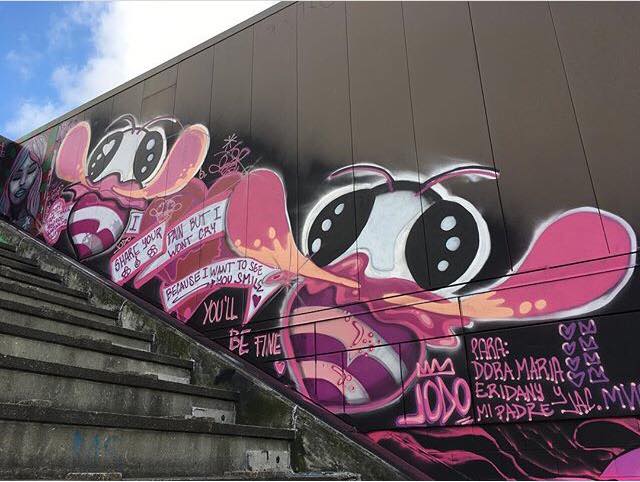 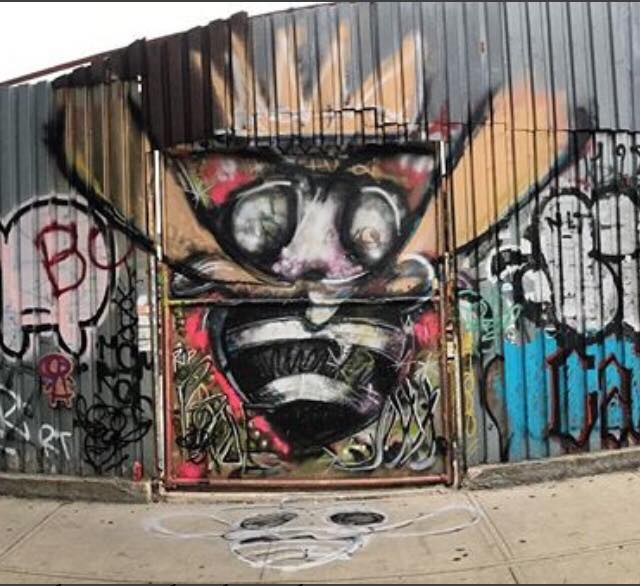 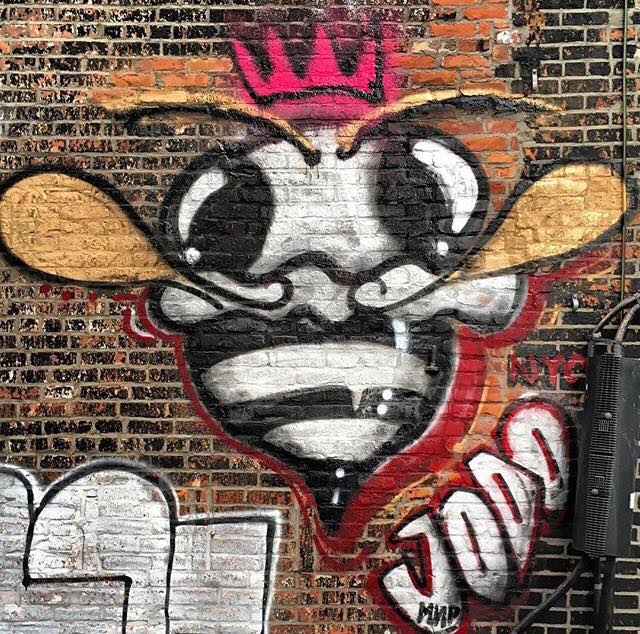 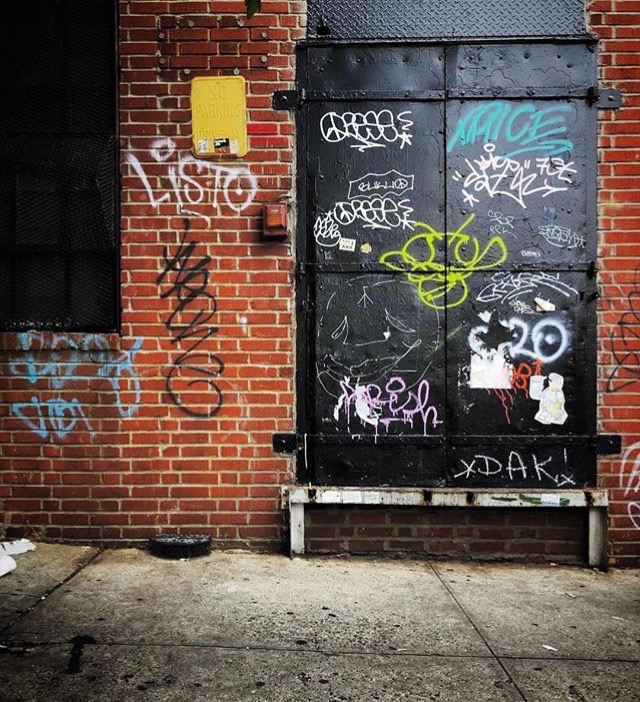 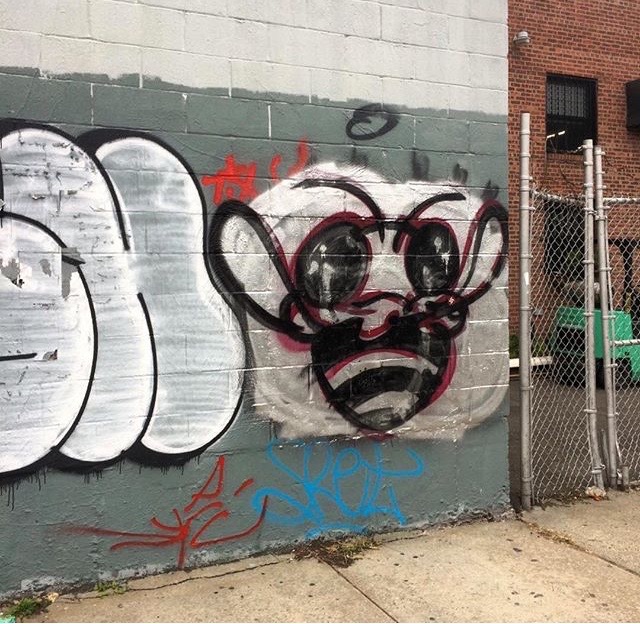 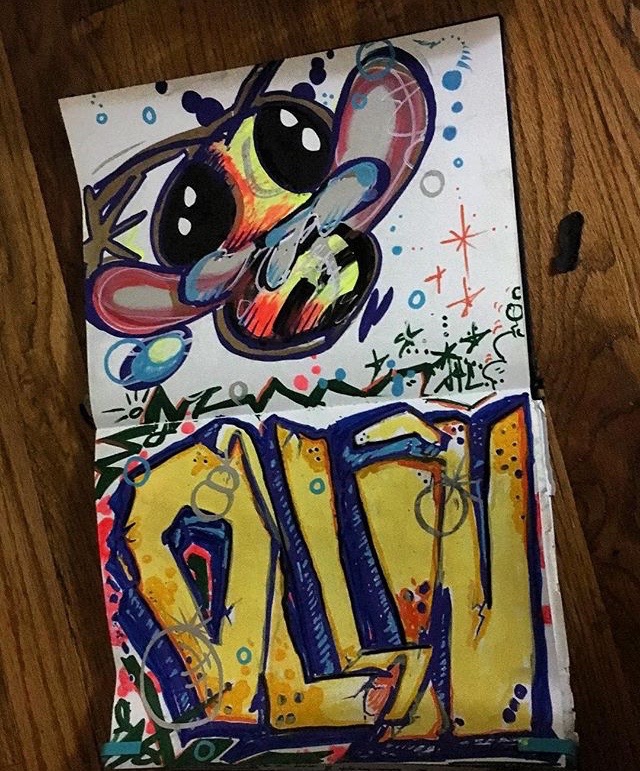 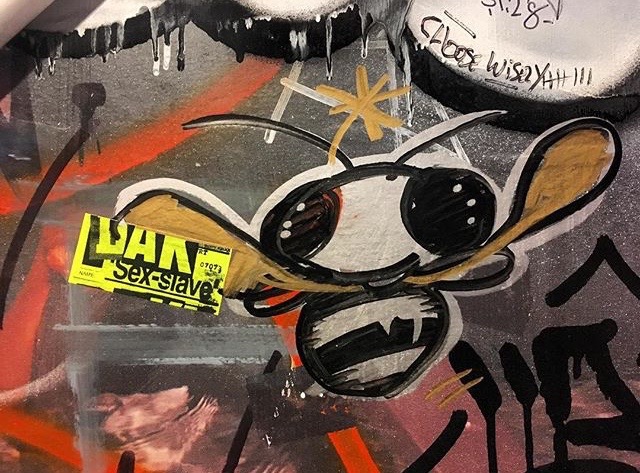 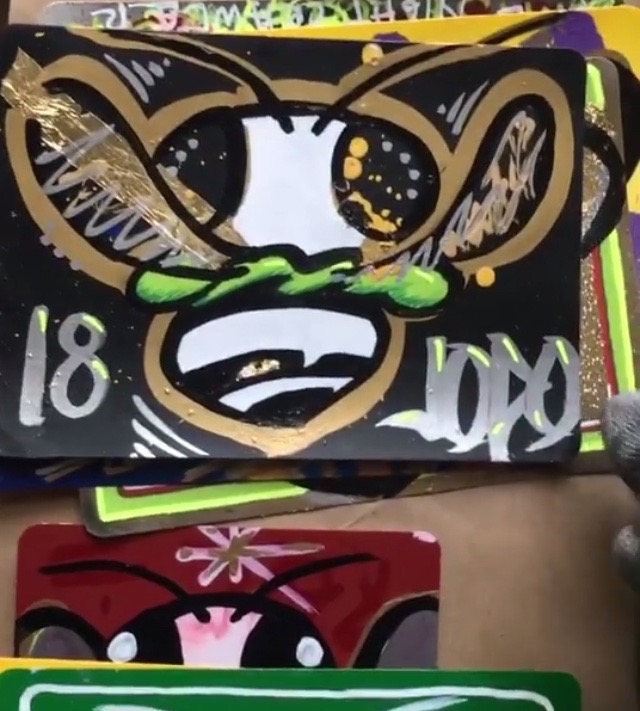 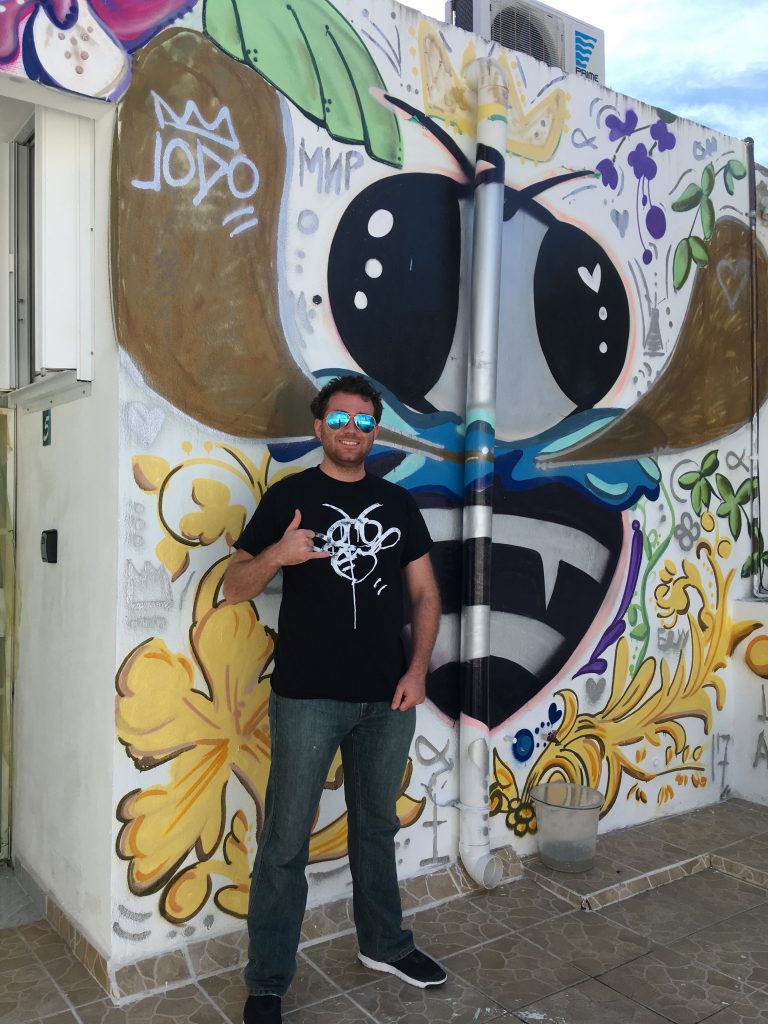 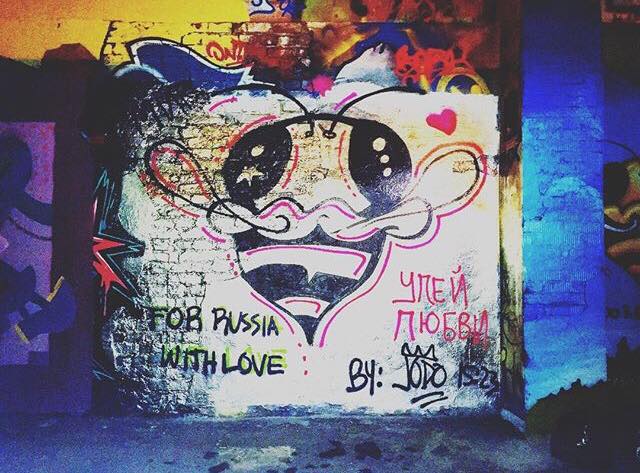 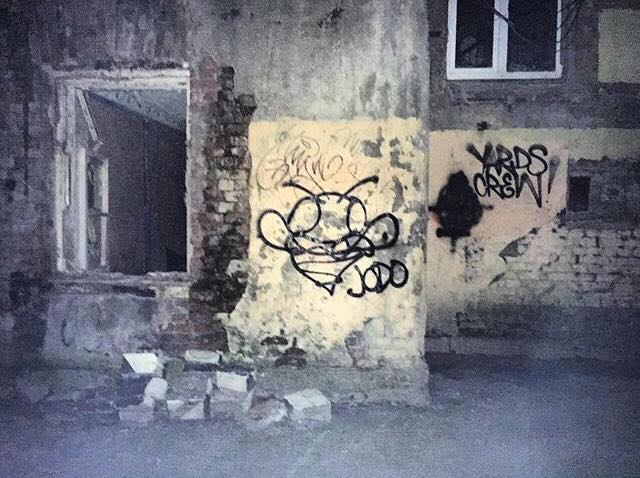 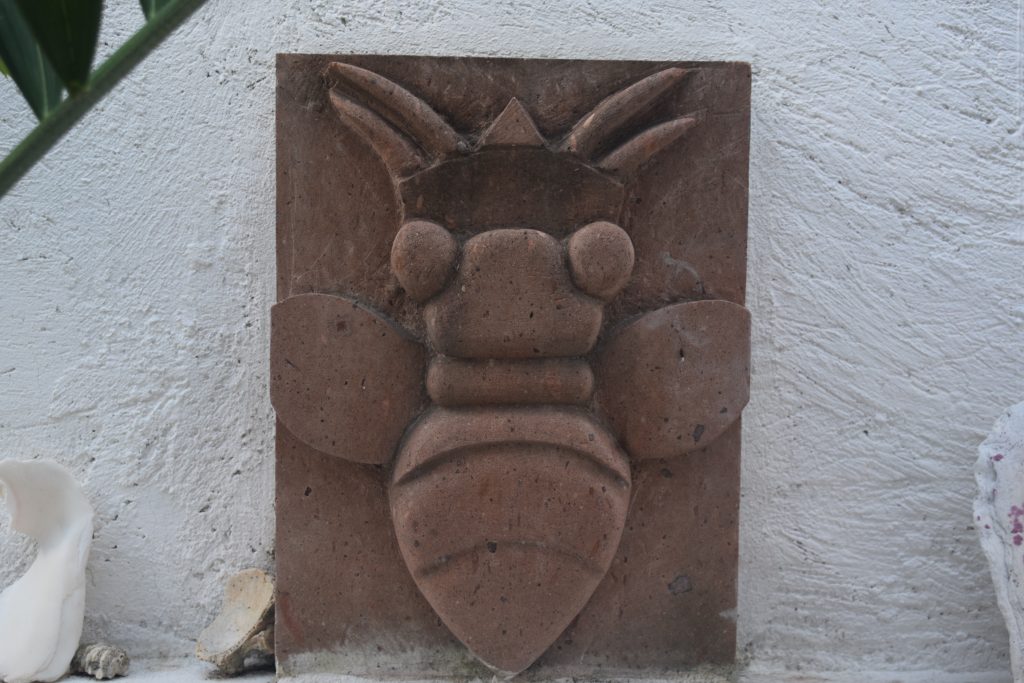 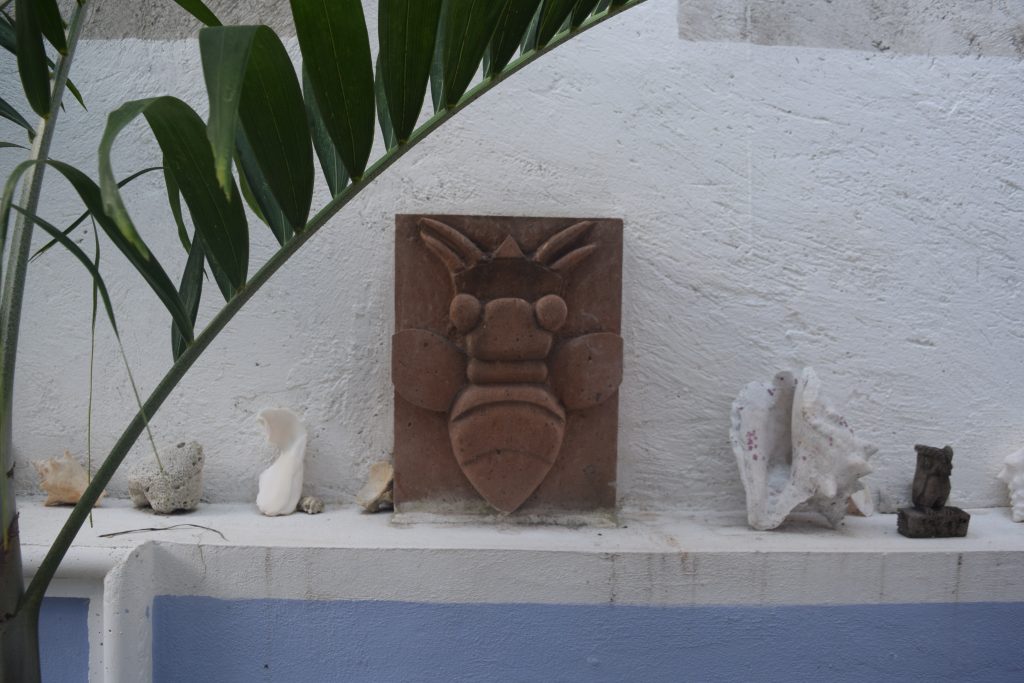 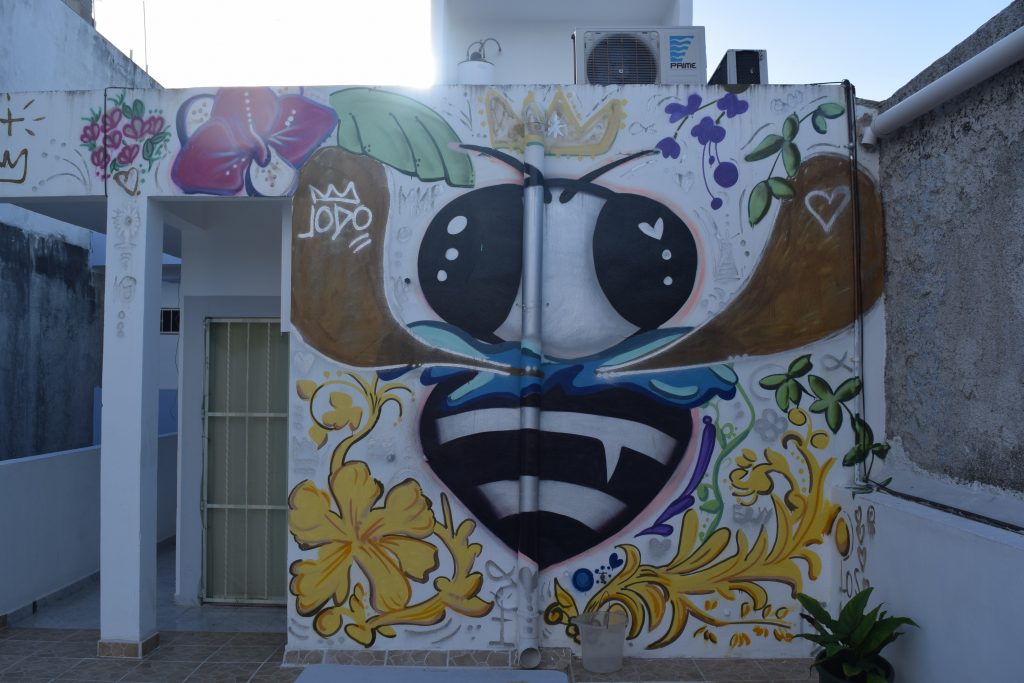 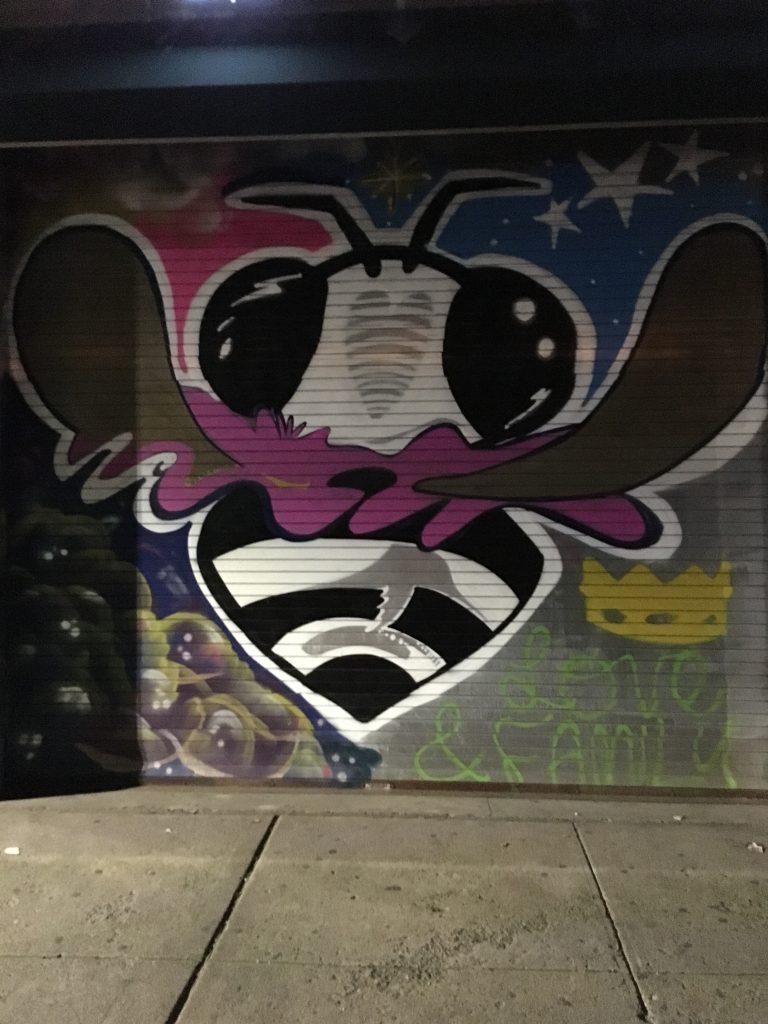 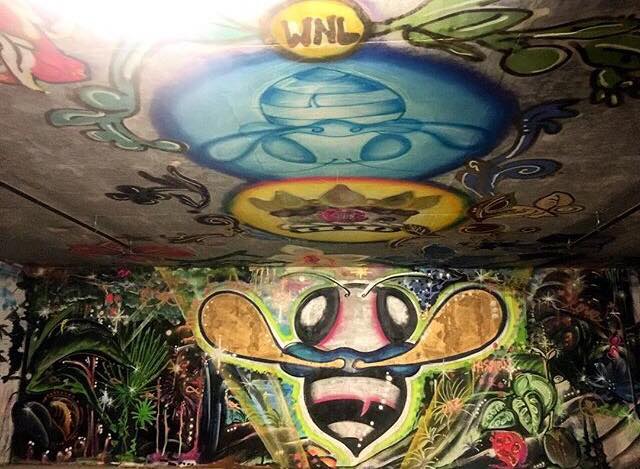 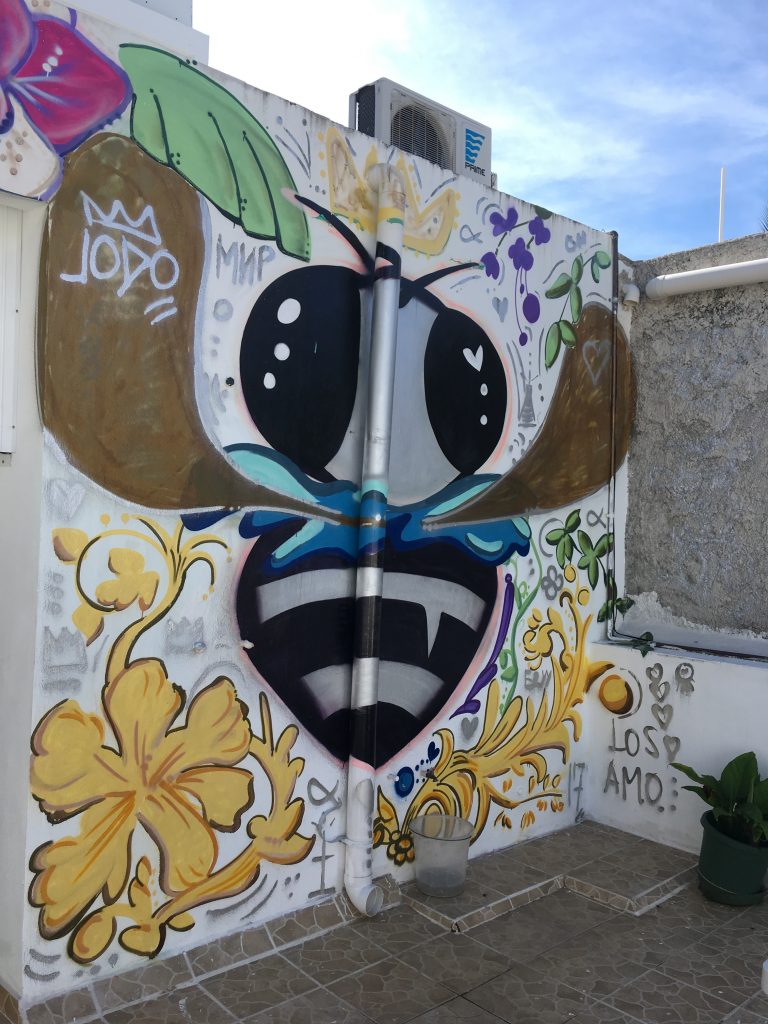 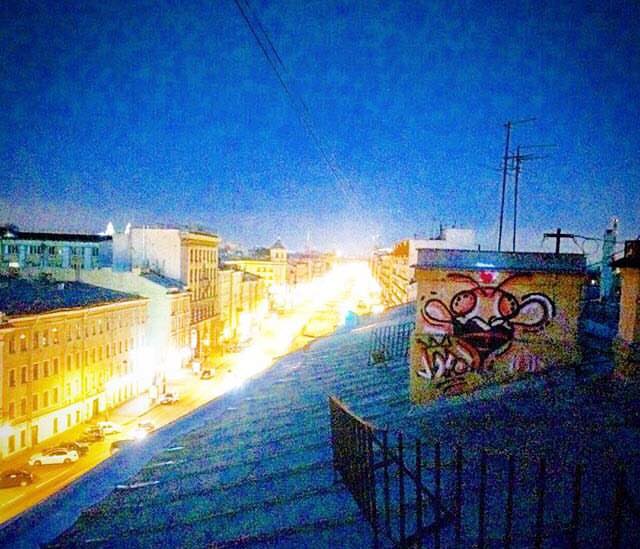 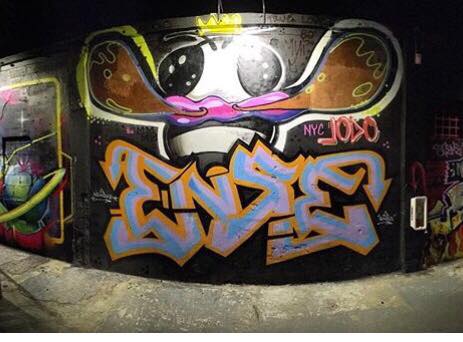 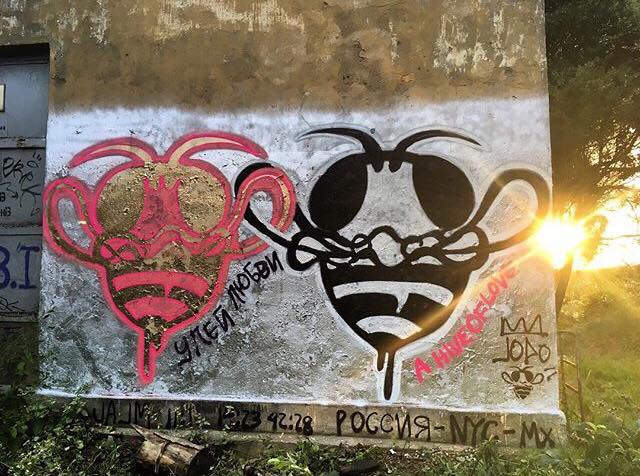 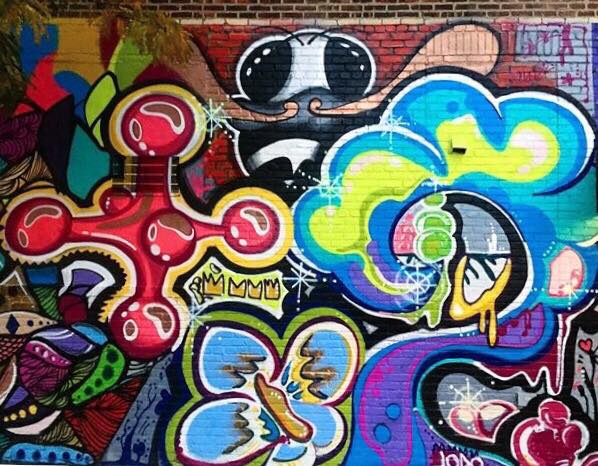 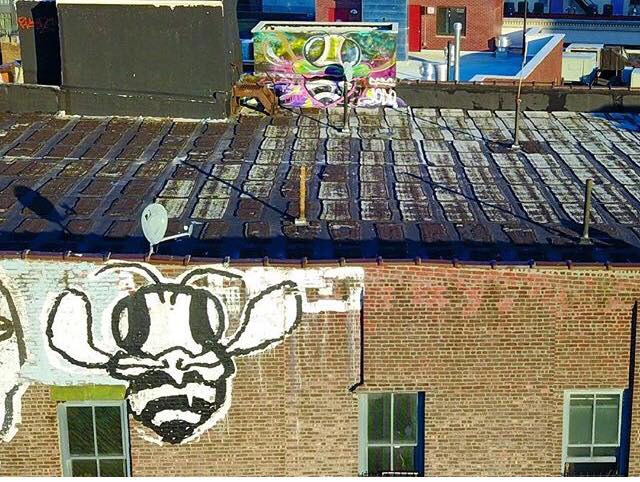 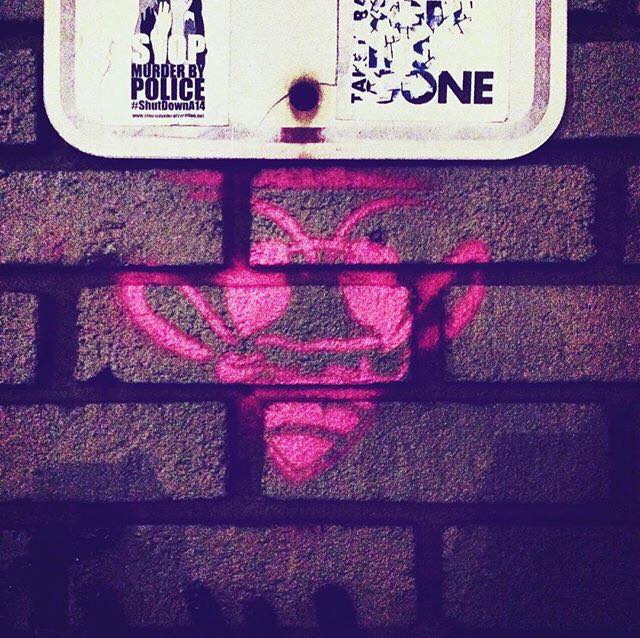 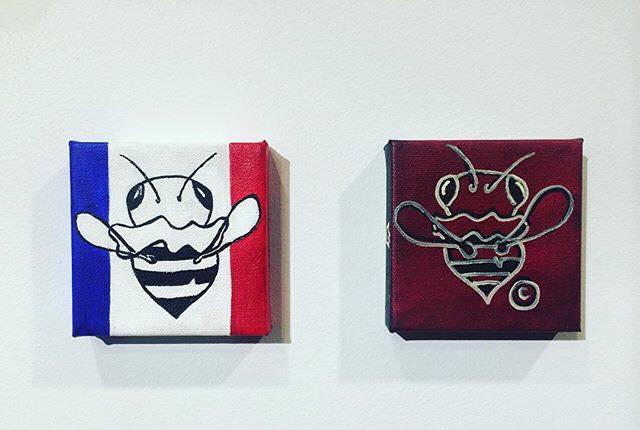 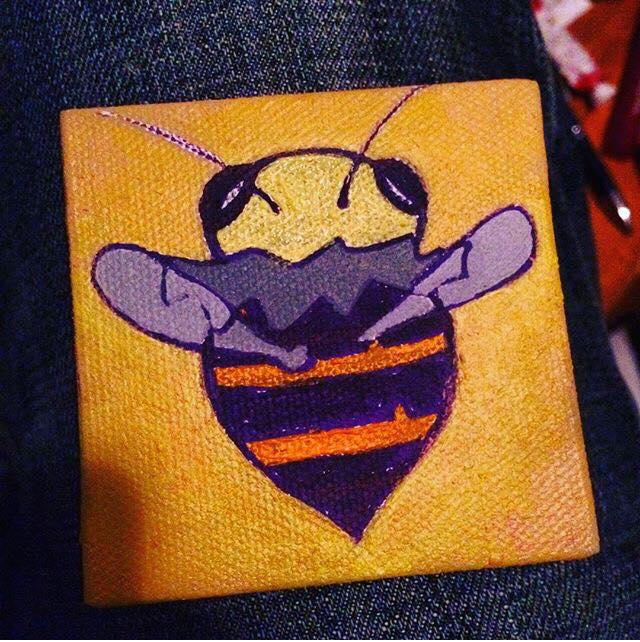