The 15 Most Memorable LA Street Artworks of 2022

Another dynamic year has come to a close in L.A.’s urban art scene, with artists continuing to push boundaries, evolving styles and delivering world-class work. It may have felt like a relatively slow year in terms of volume but there were still plenty of gems to be found if one knew where to look. Narrowing down a list of favorites is no easy feat, but these 2022 works stood out for their beauty, exceptional skill, topical resonance, or clever placement. 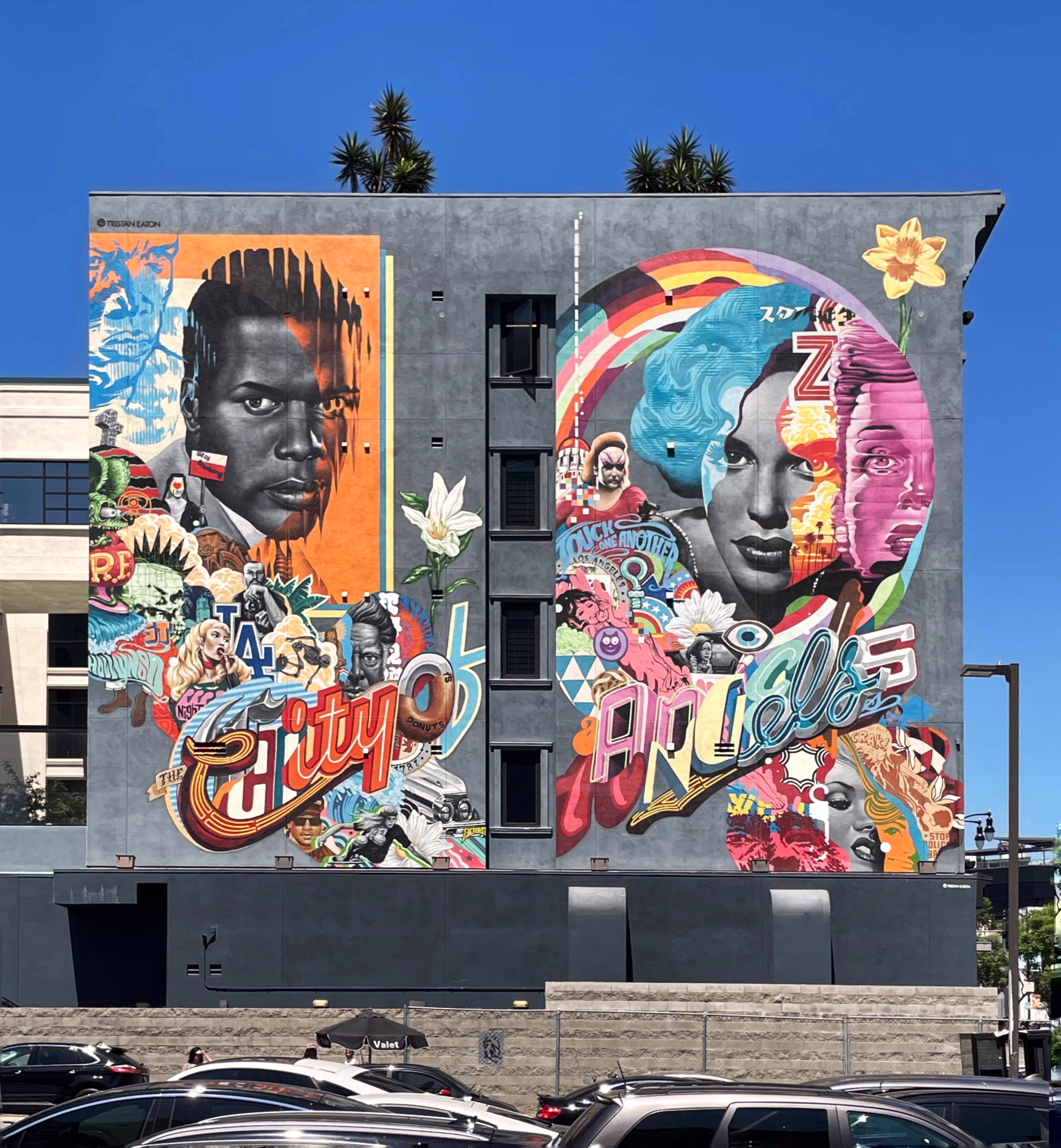 For years local superstar artist Eaton had been holding onto the idea of painting a proper “L.A. mural” when the right opportunity presented itself, so it was exciting to watch him turn ‘City Of Angels’ into a reality this summer at the iconic intersection of Hollywood & Vine. The artwork includes nods to L.A. iconography such as Sidney Poitier, Judy Garland, Joan Didion, Estevan Oriol, Randy’s Donuts, John Waters, the Griffith Observatory, Eazy-E, Stacy Peralta, Traci Lords, low rider culture, Divine, LGBTQ designers, comic book legends and lots more. 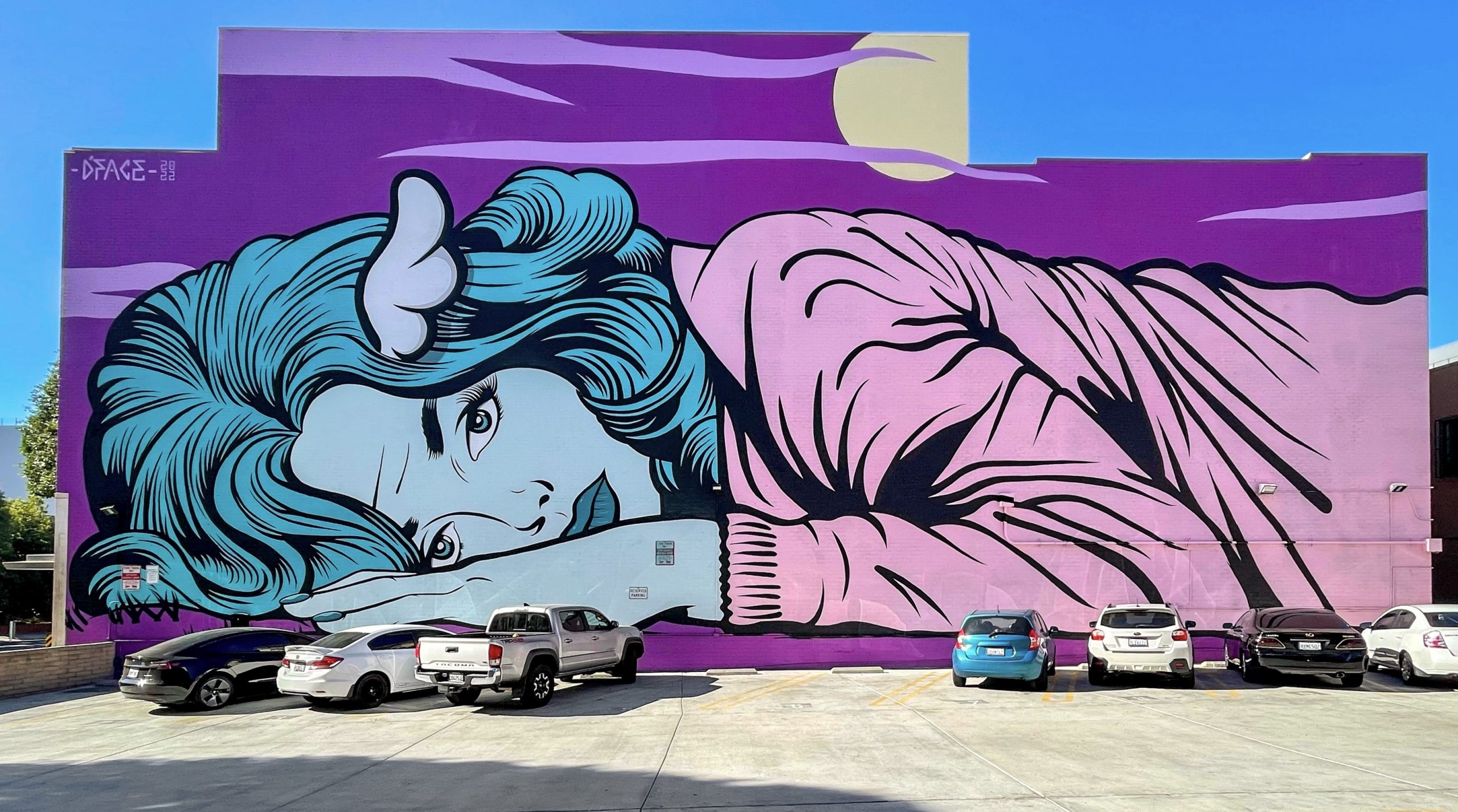 ‘Blue For You’ by D*Face – Beverly Hills

A titan in the urban art world, London-based D*Face returned to L.A. over the summer for a high-profile solo show at Corey Helford Gallery. In the days leading up to the opening, he took the time to paint this eye-catching mural in downtown Beverly Hills, an area where murals are exceedingly rare. Project produced by Branded Arts. 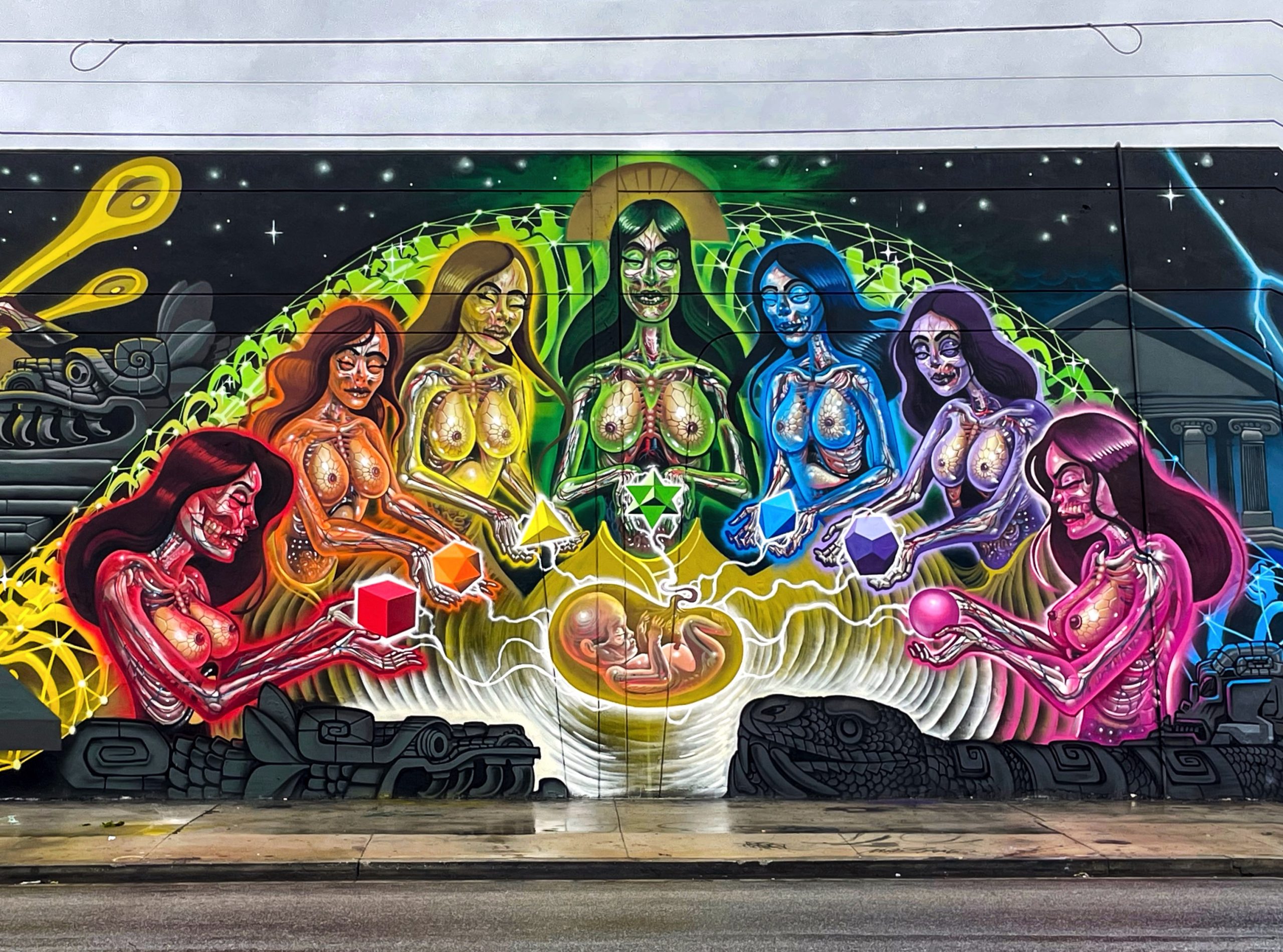 ‘The Cleansing of Carnage from Vagus’ by Nychos – Historic Downtown

We Angelenos are fortunate to have an artist of Nychos’s stature living here who paints on the streets as often as he does—he’s truly painted up a storm since he arrived about five years ago. In 2022 he created a number of eye-popping works, but the most epic of all was a massive 180ft+ opus called “The cleansing of carnage from vagus” in Historic Downtown. Pictured here is a section titled ‘The 7 Witches of Light’, which makes up only about 20% of this huge artwork.

Renowned stencil artist HiJack created a number of noteworthy, satirical artworks in L.A. this year, but none had quite the sting of this strategically-placed, unsanctioned piece at a gas station in Beverly Grove as gas prices were soaring nationwide.

To coincide with Mamba Day 2022, anamorphic graffiti pioneer Odeith was flown in from Portugal to paint a gigantic Kobe portrait and mamba snake, while acclaimed local illustrator Nikkolas Smith brought to life an illustrative tribute to Gigi Bryant and the storytelling of Granity Studios. The project was produced by Branded Arts and commissioned by West Coast Trial Lawyers.

We were lucky to have Danish artist Balstrøm back in L.A. for a few weeks this year, during which time he painted a couple of dazzling walls on Melrose as well as this standout in Boyle Heights on a wall curated by Atlas. 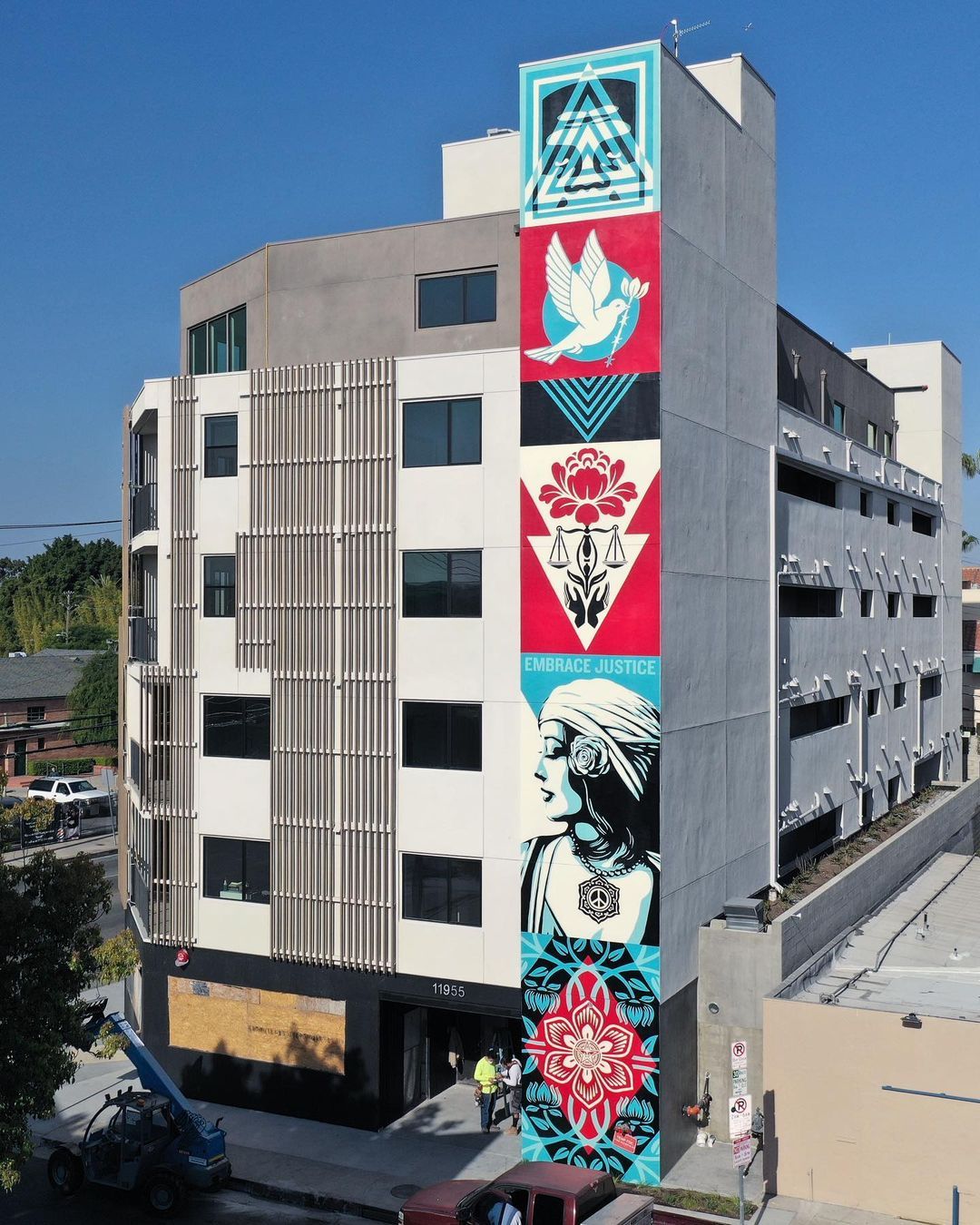 ‘A Mosaic of Peace and Justice’ by Shepard Fairey – Mar Vista

Shepard Fairey is nothing short of street art royalty so whenever he and his team paint a new mural it feels like an event. This piece rises up dramatically from Culver Blvd trumpeting Fairey’s often-echoed values of peace and justice. Project produced by Guerrilla One and Darryl Cherniss. 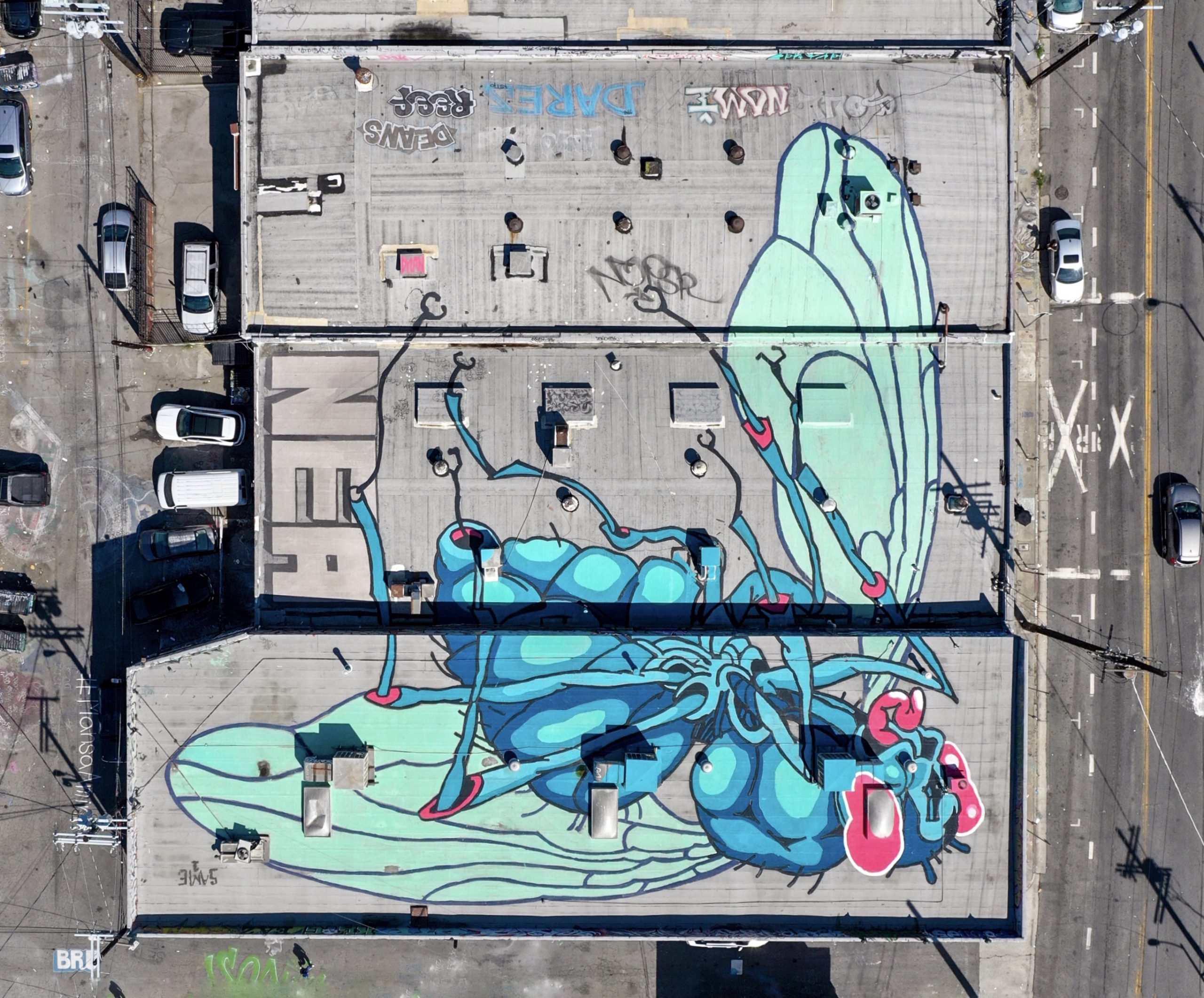 Santee Public Gallery is an industrial block in DTLA that’s curated by graffiti writer Sykd and known for its ethos of inclusivity. Melbourne-based artist Kitt Bennett came through town this fall and painted a colossal fly on the rooftop—probably the largest rooftop mural ever painted in L.A.—which can only be enjoyed from above. 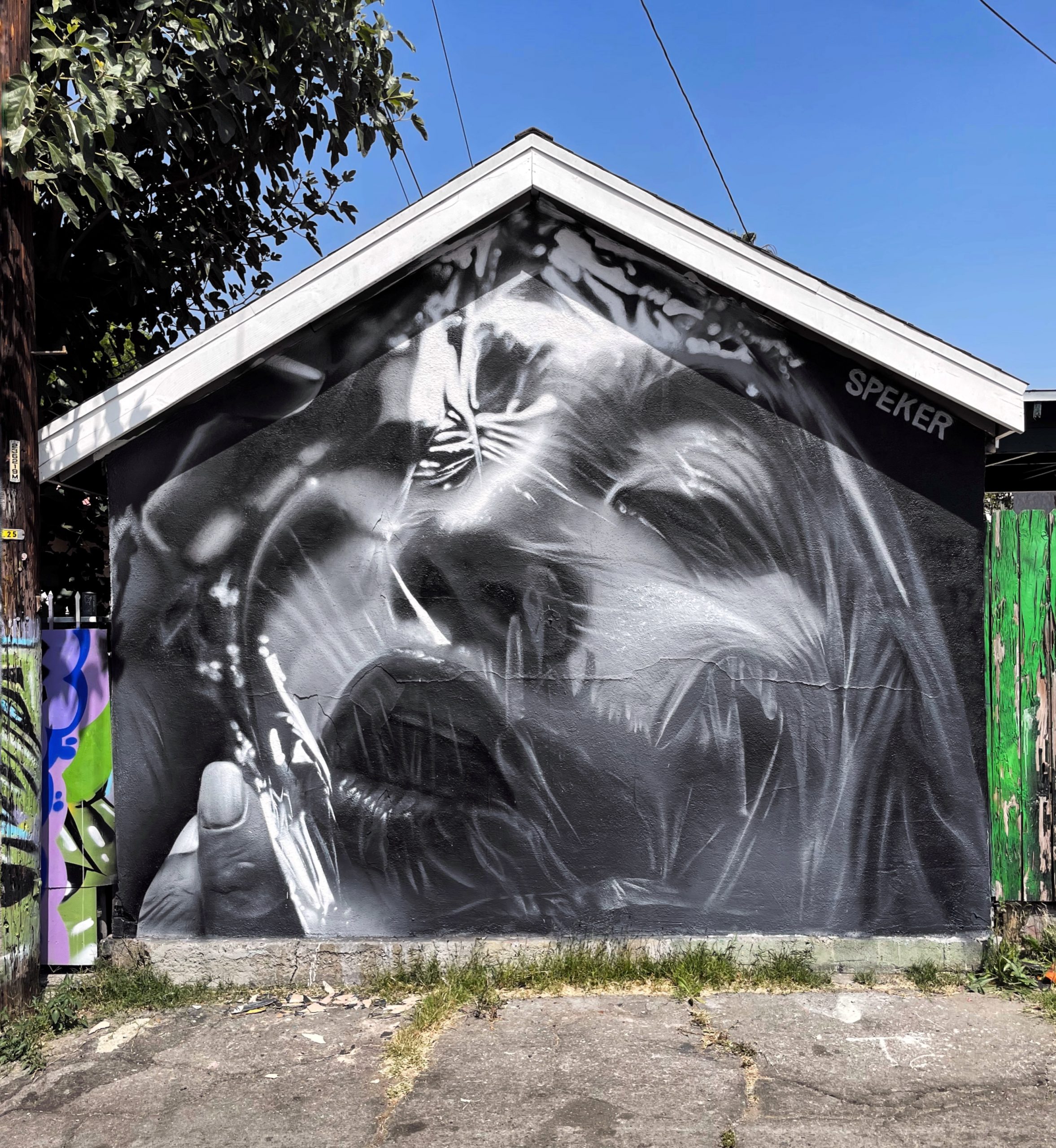 Speker is an up-and-coming artist who’s demonstrated an impressive level of skill and evolution in a short period of time. Since he moved to L.A. from Italy last year, his photorealism has only gotten better and better. This striking mural—a visual representation of the feeling of finding it difficult to breathe—was painted in an alley curated by artist ESPY for his Ktownwallz Project.

This tribute to beloved actor Betty White popped up mere days after the sad news of her passing; the portrait courtesy of photorealism specialist Never with lettering by Resol. 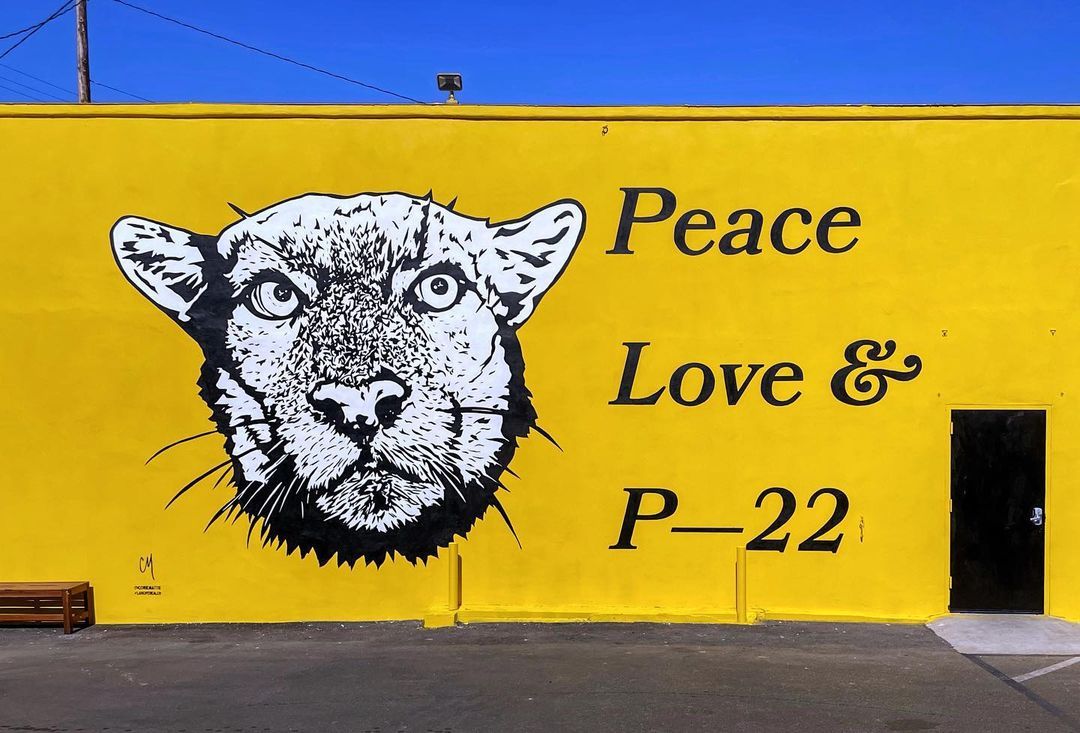 Using her trademark bold yellow coloring, artist/activist Mattie created this tribute to L.A.’s resident celebrity mountain lion P-22 in support of the #SaveLACougars campaign, in an area where the animal had recently been spotted roaming residential streets. Two months later the world was stunned by the news of P-22’s tragic and untimely death. 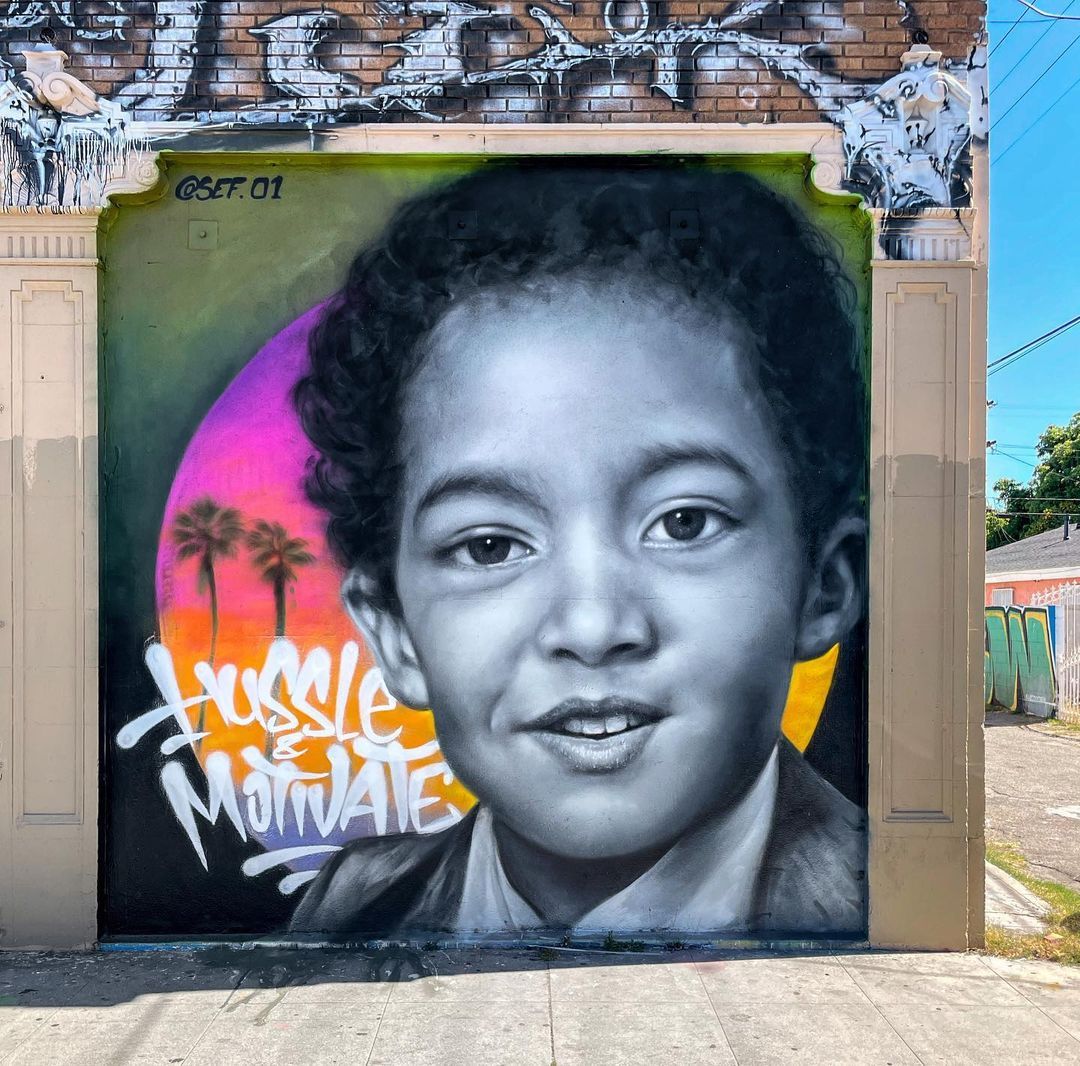 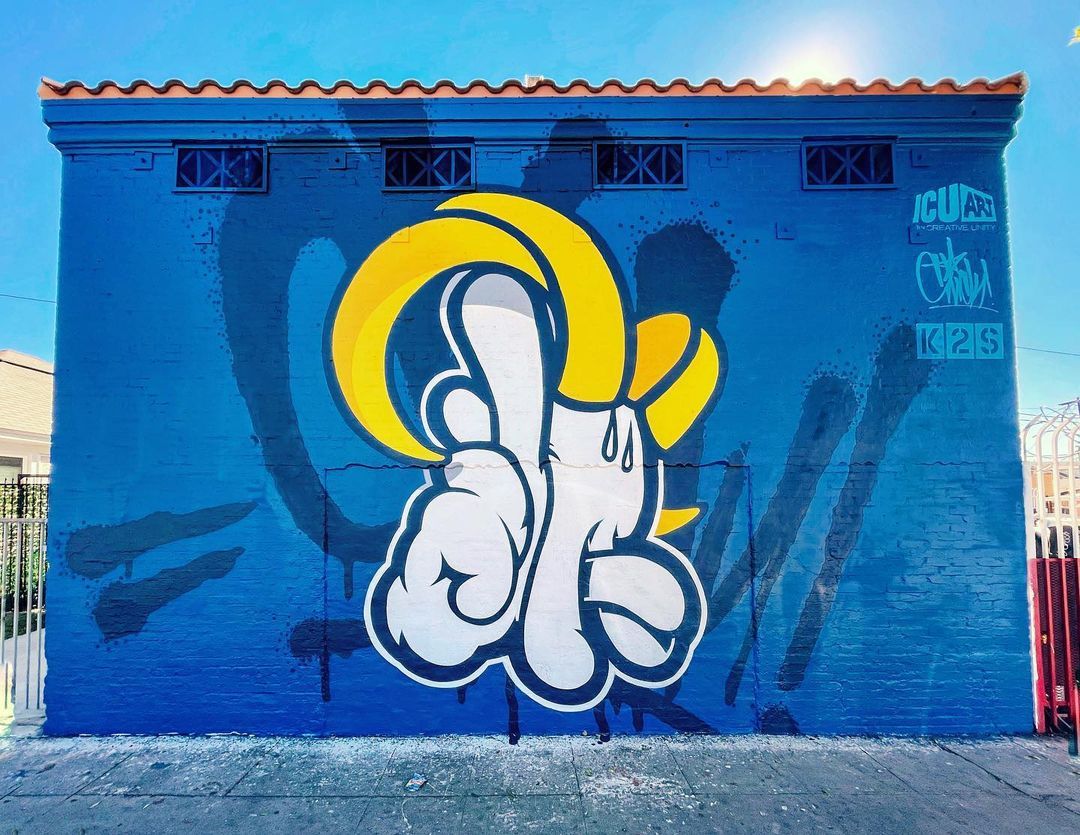 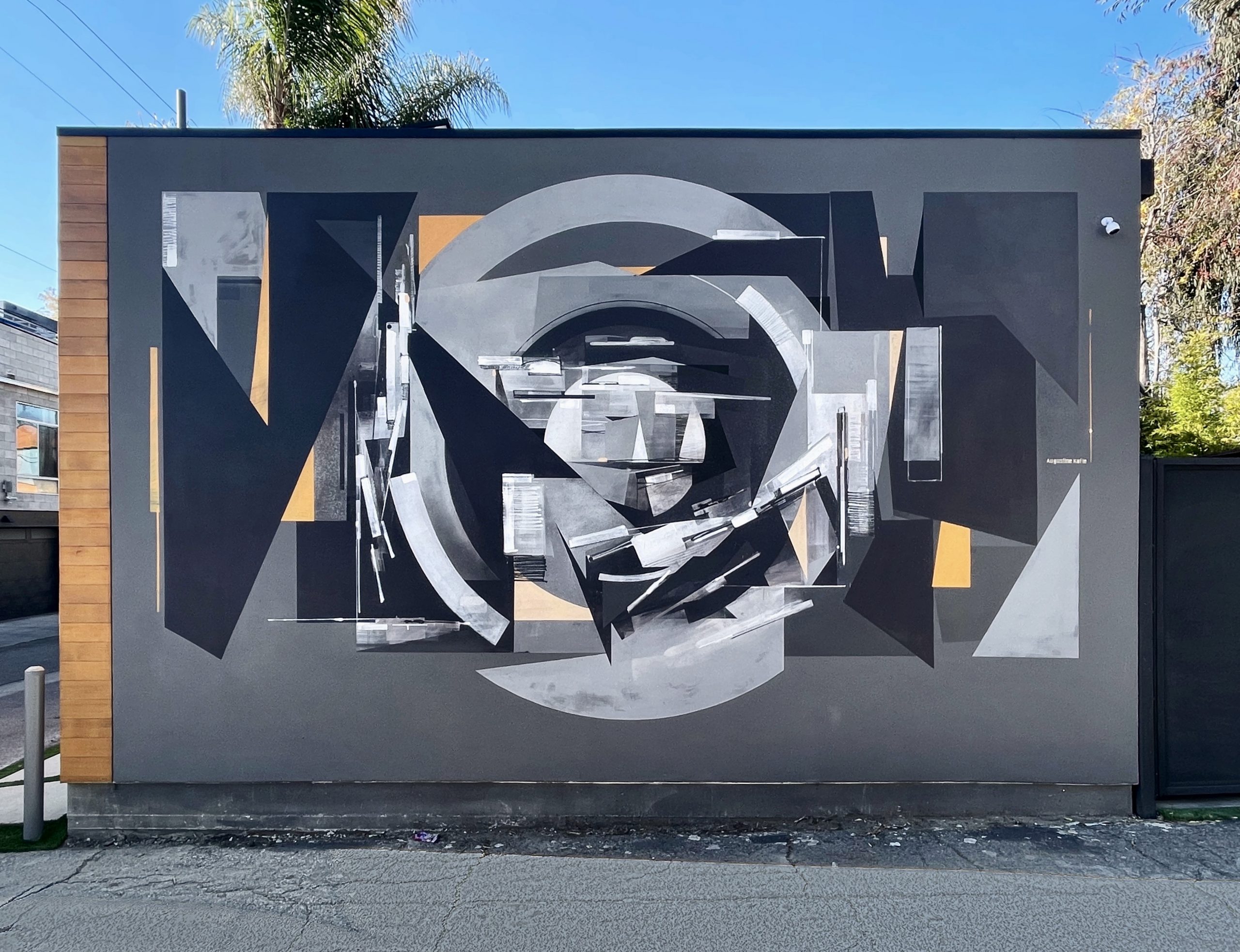 These days it’s relatively rare that we get to see a new street piece from graffuturism pioneer Kofie, so it was big news to hear he’d been commissioned by the property owner to create a new artwork in a spot where he’d had a long history of painting unsanctioned works. 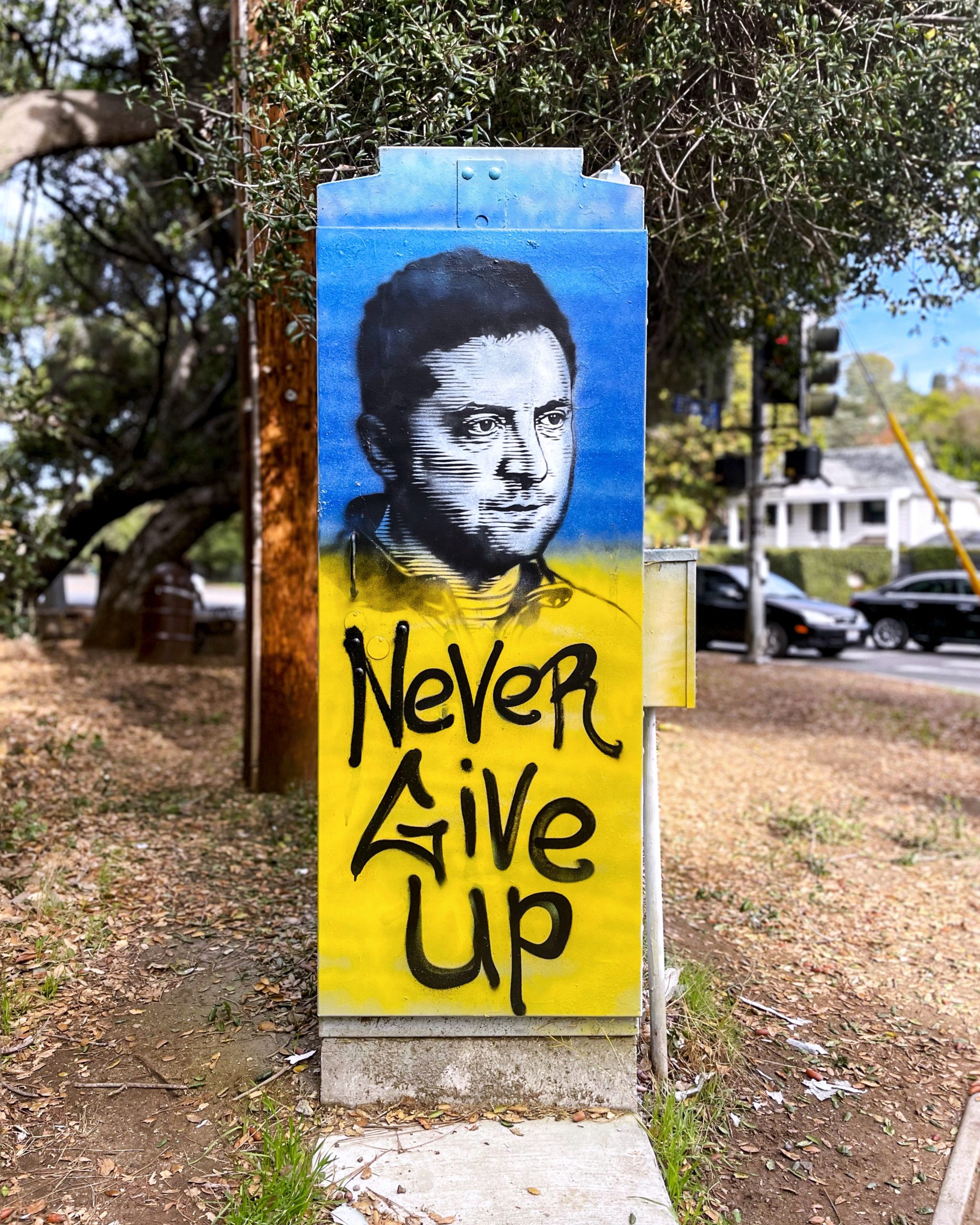 ‘Never Give Up’ by Teachr – Studio City

Esteemed local stencil artist Teachr created this unsanctioned pro-Ukraine piece on a busy Studio City street in the dead of night. Unfortunately, it was defaced within a matter of days.

Fredrik Lidskog is a leading chronicler of L.A.’s urban art scene and the founder of Impermanent Art, a public art production agency