It started as a family activity – lost in the pandemic, many of us have been forced (though not necessarily in a negative way) to spend time at home with our family or roommates as well as ourselves; inevitable introspection and soul searching to find meaningful and joyful ways to spend our time amidst a global catastrophe has taken up most of everyone’s energy. Those with children have been doing this twofold.

This is how Landon Scott began working as an artist. He explained to me the origins of his budding endeavors as such:

“A little while ago, my four-year-old daughter really got into artwork. She just wanted to paint all the time. We started doing it together and she was just loving it. I actually brought this,” he handed me a large sketch book, full of the wild, surreal drawings that have come to define his work. “I call it our daddy-daughter sketch book. It’s all things we do together.” 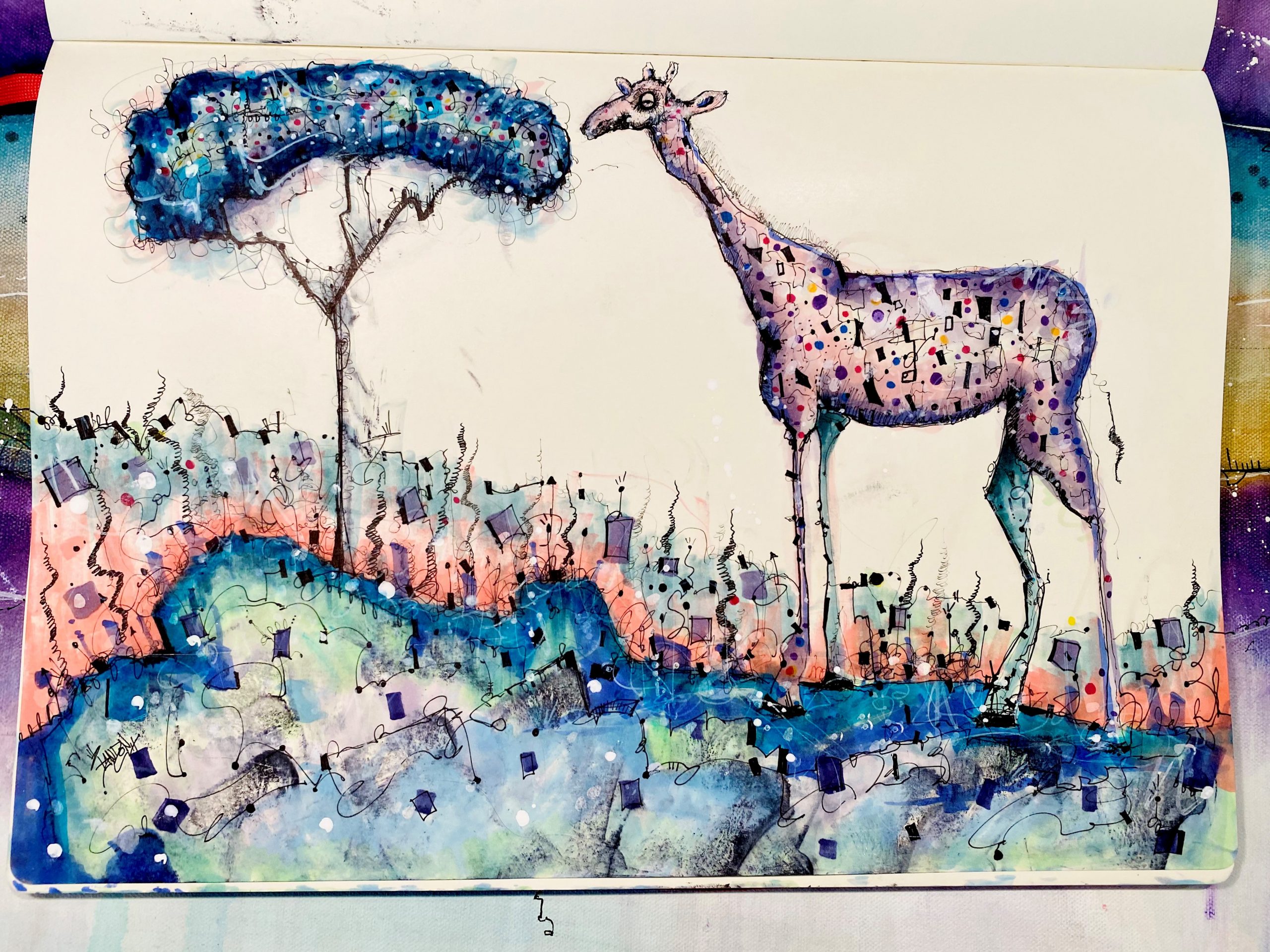 Scott described to me how he’s been a lifelong creative, being a musician and a visual artist most of his life, but he put aside his pen shortly after graduating high school. He’s since put focus on a career and a family, but it’s taken quality time with his family to bring him back to it.

“All this was done,” he referred to the artwork he brought to show me, “just since last August. My daughter and I were sketching, and I saw her inspiration and her love for it, and that sparked it back up for me. I said, ‘Oh man, I like this. Why did I put this off?’ It came back at the right time, and now I’m doing art for the right reasons. It feels natural.”

Scott has had some tremendous success in the Minneapolis art scene. After thirteen years without an attempt, he picks up a pen; just a few months after that, he joins Instagram and begins putting his work out there. The terrific reception he’s had was almost instantaneous.

“My daughter and I were sketching, and I saw her inspiration and her love for it, and that sparked it back up for me. I said, ‘Oh man, I like this. Why did I put this off?’ It came back at the right time, and now I’m doing art for the right reasons. It feels natural.” 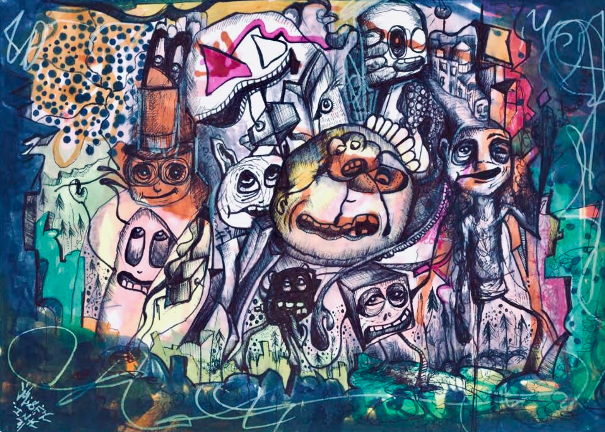 “When I started creating again and I started this account, I had zero expectations. It was just something I enjoyed doing again. And the feedback has been very positive. I’m always humbled, and incredibly honored whenever anyone wants to buy anything or wants a commission.”

He pointed out the pieces that have been commissioned and sold he had brought, which compromised most of those he had outside of his sketchbooks.

“I’m thirty-four years old and I just joined social media in August,” he remarked with laughter, “and I was surprised to see how much talent we have in Minneapolis, from artists and musicians.”

Since he’s begun posting his work online, many artists in the local music scene have reached out to commission album covers, and a local art shop Unearthed Arts (@unearthedarts) in Waconia, has accepted his work to be sold in their store. Connecting with local artists such as Mic Q.A (@q.a_theswordsman), Dear Mama Rose (@dearmamarose), Uncle T (@your.uncle.t), FreshVs Sellers (@reshvssellers), Reed Benjamin (@reedbenjamin), and Green Mind State (@blackkgms), he’s been able to set up his own network that’s helped him thrive, making money off his work, and motivating him to continue creating into unknown territory. There’s even talks of an art and music event at Waconia once the pandemic restrictions are lifted, which Scott plans to help organize. 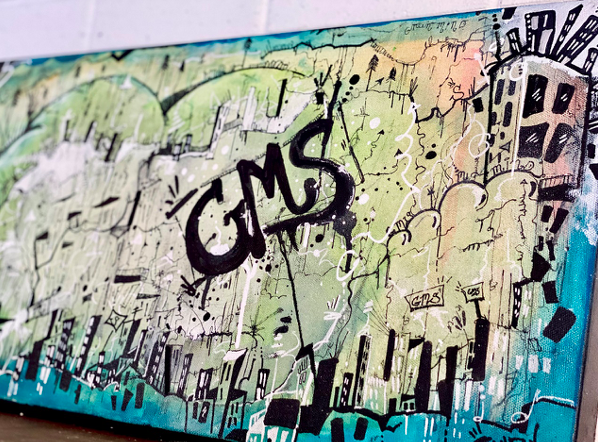 I’m heavily influenced by music when I create,” he told me. “I listen to pretty much everything. Metal, Jazz, hip-hop, country, but when I create anything, I’m almost always listening to hip-hop. It gets me in the right headspace, and to me, there’s something symbiotic between hip-hop and what I’m creating.”

I was able to connect with Scott since we share the same hometown. Being Minnesotan, I’m always eager to scout the talent my state has to offer. When a friend (who lives in New York City) introduced me to Scott’s work, I jumped on the opportunity for an interview.

Our meeting took place in his company’s headquarters, a giant, decadent glass building in a suburb of Minneapolis. It was empty, due to COVID, so we set up in a conference room where Scott had brought several large sketchbooks and a couple canvases for me to examine as we spoke about his work. Although not initially inspired by graffiti, his style is decidedly urban. He makes use of darker color pallets for his backgrounds, and contrasts this with brighter colors dispersed around and within cityscapes and surreal, cartoonish or horrific figures and faces. There is significant use of a scrawling pen style, with abstract splattering and dripping of ink throughout each piece which, given the structural themes, give his work a brutally gritty aesthetic. 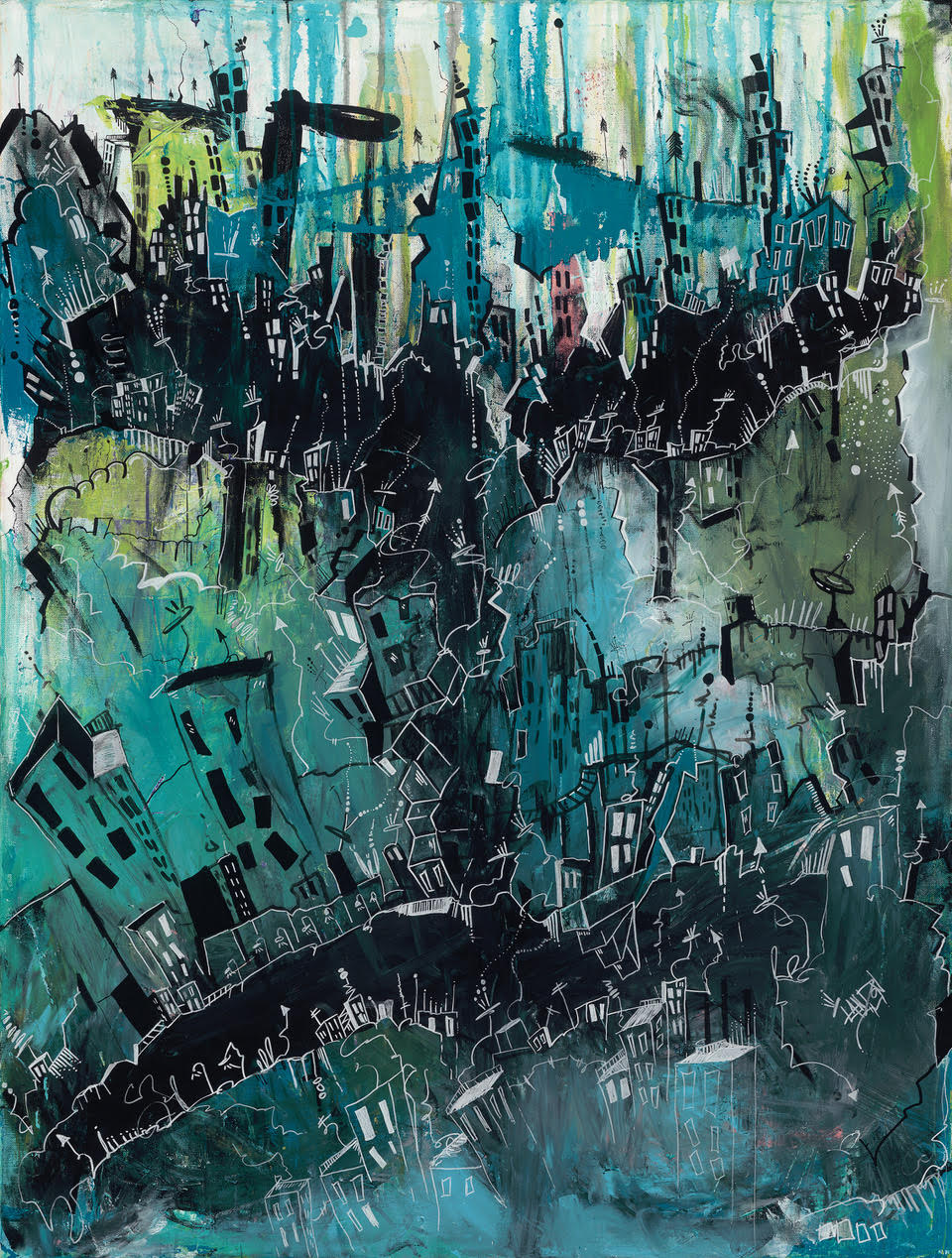 “This is all pen, Prisma markers and Copic markers,” he said, referring to the work in his sketchbooks which, due to their size and aesthetic, I assumed to be paintings. “This medium I know quite well. I love the freedom that I have with markers and pens and blending them together. Over here,” he pointed to a large Native American headdress that was the centerpiece of the canvas, “is actually my first painting. People always get my work confused with paintings, when this is actually completely foreign to me.”

He had brought two paintings of Native American headdresses for me to see: his first attempts. Amidst the chaos of the work in his sketchbooks, they stood out to me. They had a similar style of application, but they seemed much more deliberate. He elaborated for me how this was his way of reconnecting to his Native American heritage, inspired initially by a book he had read. 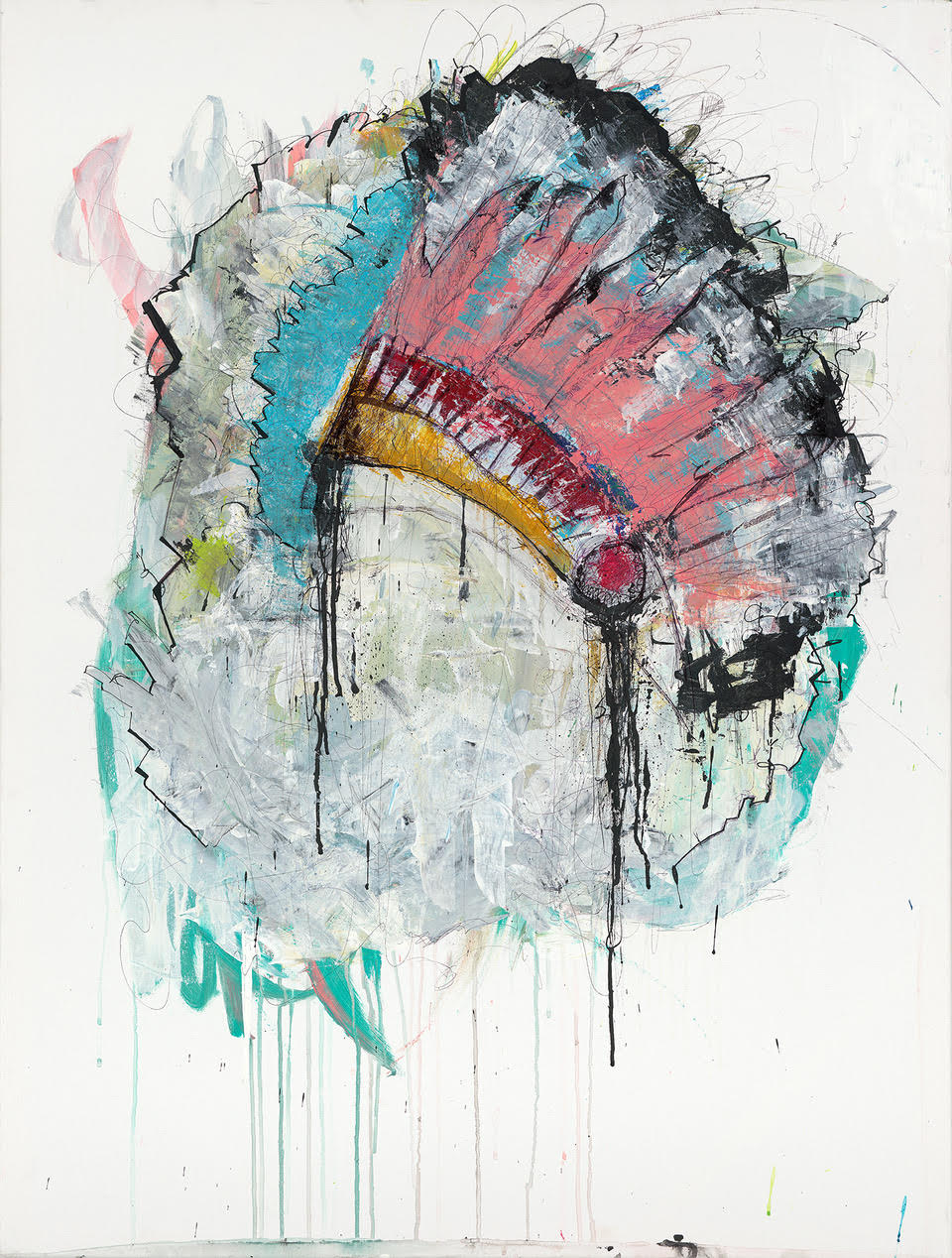 “I read this book, Empire of The Summer Moon. It’s about the Comanche Indians and the Texas Rangers. It goes into crazy detail about Native American history. I can’t claim it, but I do have this side of my family that I’ve never met, my dad’s side, that are currently living on a reservation in South Dakota. So, I’ve got some Native blood in me. My dad does a lot of the rituals, sweat lodges, he plays the native flute. We have these roots, I’m trying to learn about them, and this is my way of connecting with them.”

I asked about the inspiration for his work; how he’s developed a style that’s at once both a common denominator and something that makes each piece unique. This was the cause for much pondering in our conversation.

“That’s a good question; I don’t really have any plans or thoughts on what I’m going to do. I just have this urge, like I need to get the creative juices flowing. I just sit down and see where it goes. Freeform. If I think about it too much nothing seems to happen. When I’m not thinking so much and completely drawing from my imagination, that’s when the best stuff happens.” 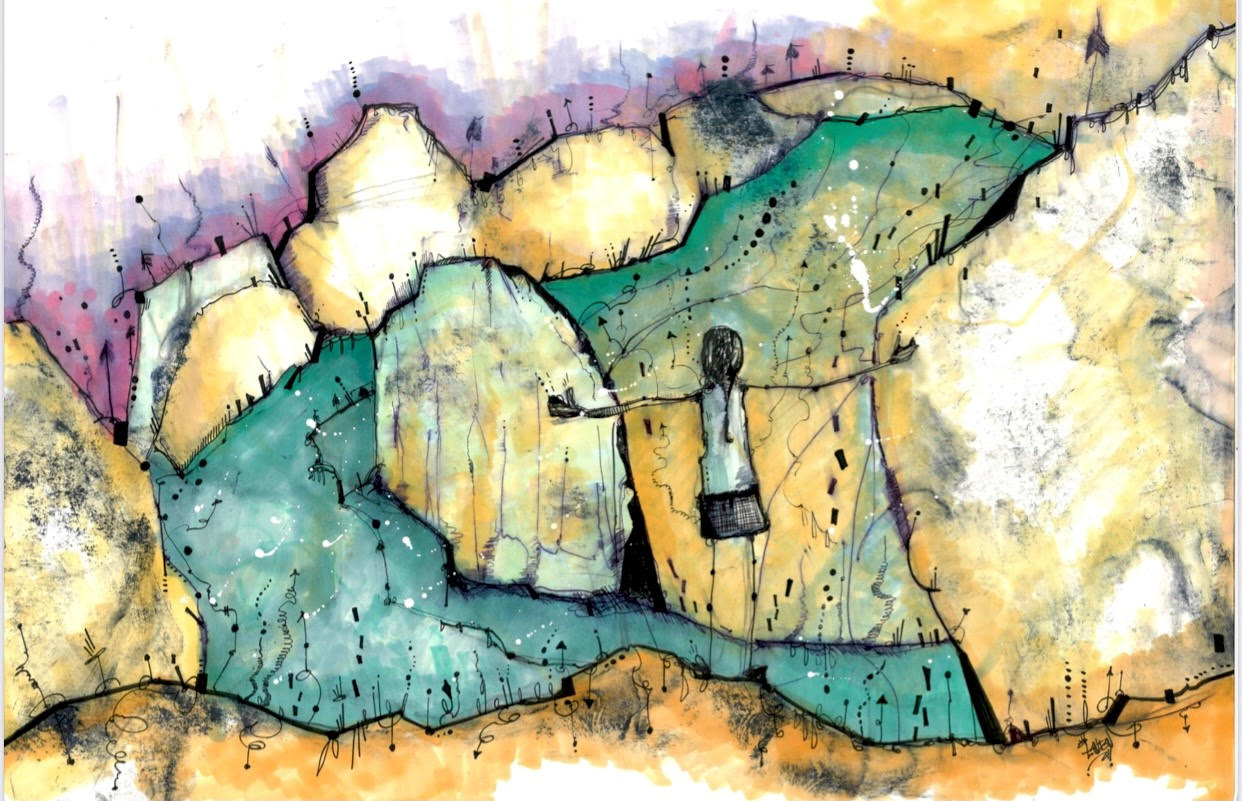 “My daughter said it best, I actually wrote it down in our sketchbook. She goes, ‘Daddy, art is the perfect thing for not thinking,’ and I was like, yeah, that’s perfect.”

Harking back to the original impetus for his new found creativity, he went on:

“My daughter said it best, I actually wrote it down in our sketchbook. She goes, ‘Daddy, art is the perfect thing for not thinking,’ and I was like, yeah, that’s perfect.”

He had a third canvas present that had obviously been painted over and redone into another pen-and-marker piece. He explained how this was an example of when deliberation didn’t work in his favor.

“I don’t know why I didn’t like it. I started it and I just wasn’t feeling it. I was thinking too much about that one. I thought, I just need to wipe this clean, not think about it and see where it goes. And I think it turned out awesome.”

This is a testament to his motivation and method of making art. The freeform, no holds barred approach to putting down whatever is in his mind. It’s the integrity of what’s considered to be the outsider artist, developing style through experimentation rather than education. 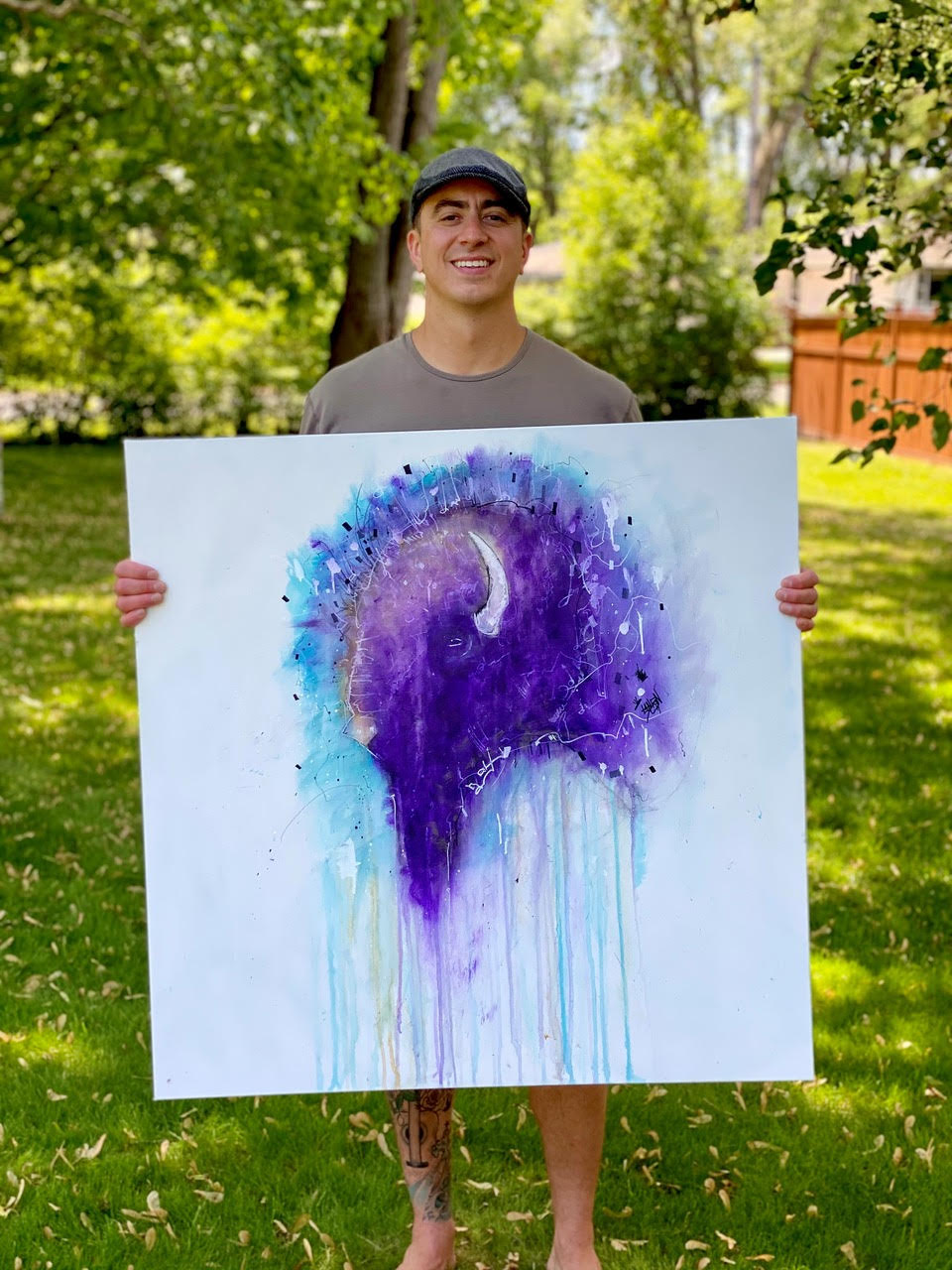 “I developed my style because I really can’t draw that well. I know the basics, but I need to not focus. I need to just put it down, see what happens. It happened naturally. I said to myself, you either need to learn how to draw, or you need to come up with a style. Well, I don’t like to just sit and draw in detail. So, that forced me down the path of abstract creating, pure imagination.”

The goal of creating art for Scott is one comprised of pure self-expression; uninhibited adventurism into his own imagination, revealing its world piece by piece through the pages of his sketchbooks and canvases. Creating for the right reasons, as he’s said himself, as a natural phenomenon, at once both therapeutic and dutiful, a necessity of life. And of course, creating happily, approaching art with the same love and appreciation he does his family, without whom his art wouldn’t exist. From spending time with his children, creating with them and teaching them, to reconnecting to his Native American heritage, the purity that drives this new form of self-expression has always been rooted within his family.