Listen: The Voice of Los Angeles

As a New Yorker, I have natural skepticism about Los Angeles. But even I have to admit that the mix of beach and grit that makes up the City of Angels creates a unique aesthetic for its local street art culture. LA-based street artist Listen exemplifies this. And in a city where the stereotype is that its denizens are image-conscious and self-obsessed, in Listen’s tagging moniker they defy convention. “My name is Listen to represent the people,” Listen explained. “It came from the fact that the world isn’t listening to the people.” It’s somewhat unique among street artists to have an active verb as your tag – a noun is the more common choice. But Listen’s tag serves as an imperative call to action and an act all in itself.

It’s somewhat unique among street artists to have an active verb as your tag – a noun is the more common choice. But Listen’s tag serves as an imperative call to action and an act all in itself.

The persona of Listen was born in 2007, right before the financial crisis and just at the conclusion of the Bush years. America was reeling from the burgeoning war on terror in the wake of 9/11 and existential military horrors like Abu Ghraib. In short, it really wasn’t so different than the climate of apocalyptic fear and political landsliding we now live in. “I was inspired by fellow street artist Banksy’s mission, but he wasn’t gritty enough for me,” Listen said. “His work was too clean.” Listen’s stencils tackle topics like universal healthcare, the mask mandate, and gun violence, and are a prime example of how street art can be a means of understanding politics during tumultuous moments. 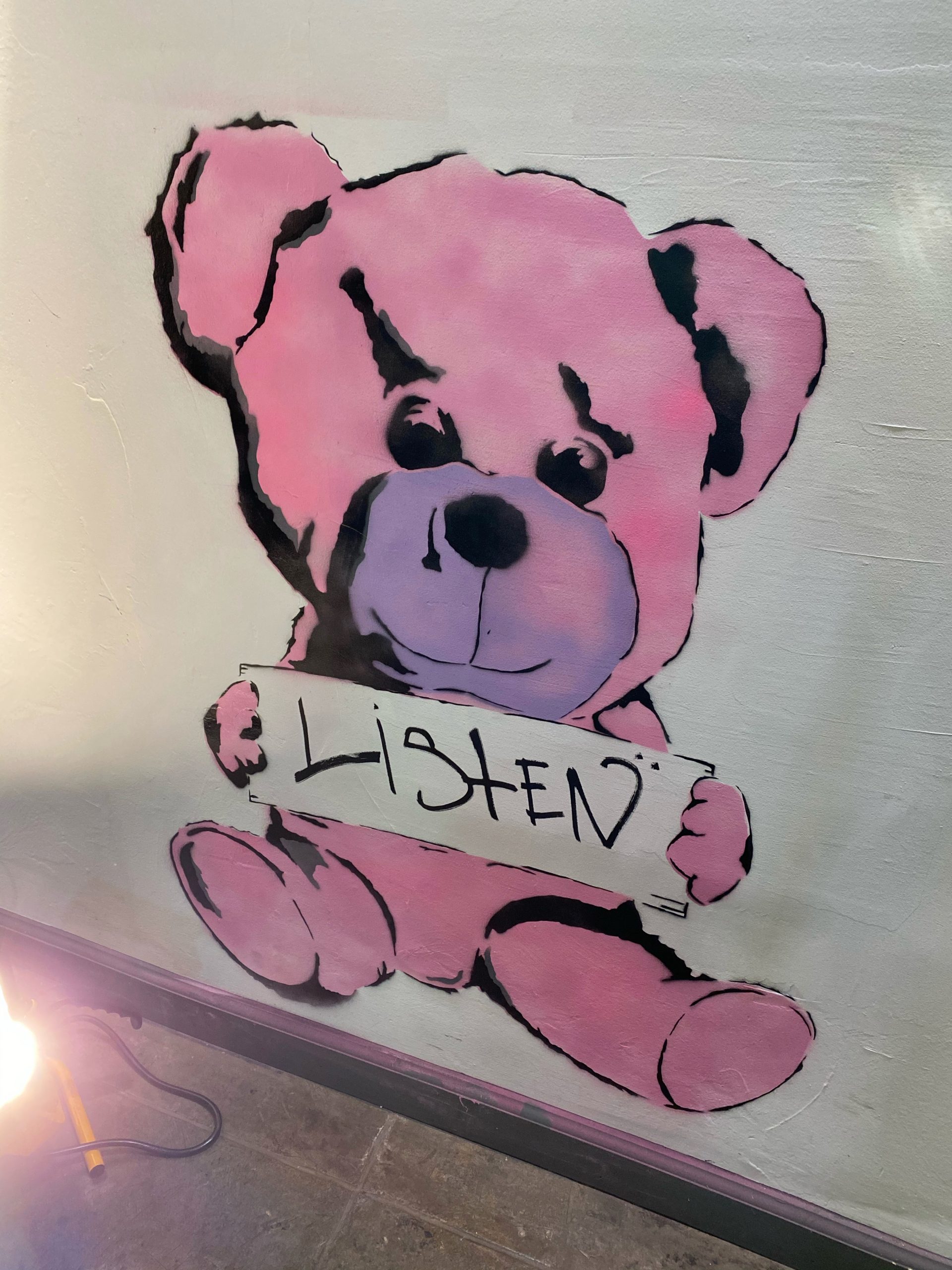 Listen’s process is to layer with sketching, stencil, and spray paint, a technique which merges ‘90s techniques with a 21st century eye. Hearing Listen’s answers, I couldn’t help but think that his work does speak to what they call a  “deteriorating political climate” where rather than faith in politicians, the average person has more allegiance to popular culture and consumerism. Listen harnesses this new form of communication in their art and spreads the message that instead of fighting mass media and popular culture as the new form of communication, it’s better to embrace it in its all its vibrancy.

Listen’s work picked up speed in 2019 when it seemed clear that something had to give, though none of us knew at the time the scale of what was going to befall us the following year. At the time, Listen was making pieces about Obamacare, a divisive issue that perfectly illustrates the change in how 21st century people perceive politics. The exact same healthcare policies as Obamacare were pitched to Republican senators, and those senators then approved them – so it was clear that the problem detractors had was not necessarily with universal healthcare but with Obama himself. It was less about the issue, more about the optics.

But Listen’s pieces encourage viewers to question rather than take things at face value. “In one of my stencils in Beverly Hills, the dot on the question mark dripped all the way down to Pico Boulevard,” they said. Though that may have been accidental, it added emphasis to the aspect of the stencil that was discouraging viewers from blind allegiance. That piece was Tupac Superman, which shows Obama with the phrase universal healthcare beside him. “I walked with a brush in hand and had the paint drip about 7-10 blocks from the painting to grab attention,” Listen explained. This technique emphasizes the question mark and therefore the question, following passers-by even as they leave the scene of the stencil.

“In one of my stencils in Beverly Hills, the dot on the question mark dripped all the way down to Pico Boulevard.” 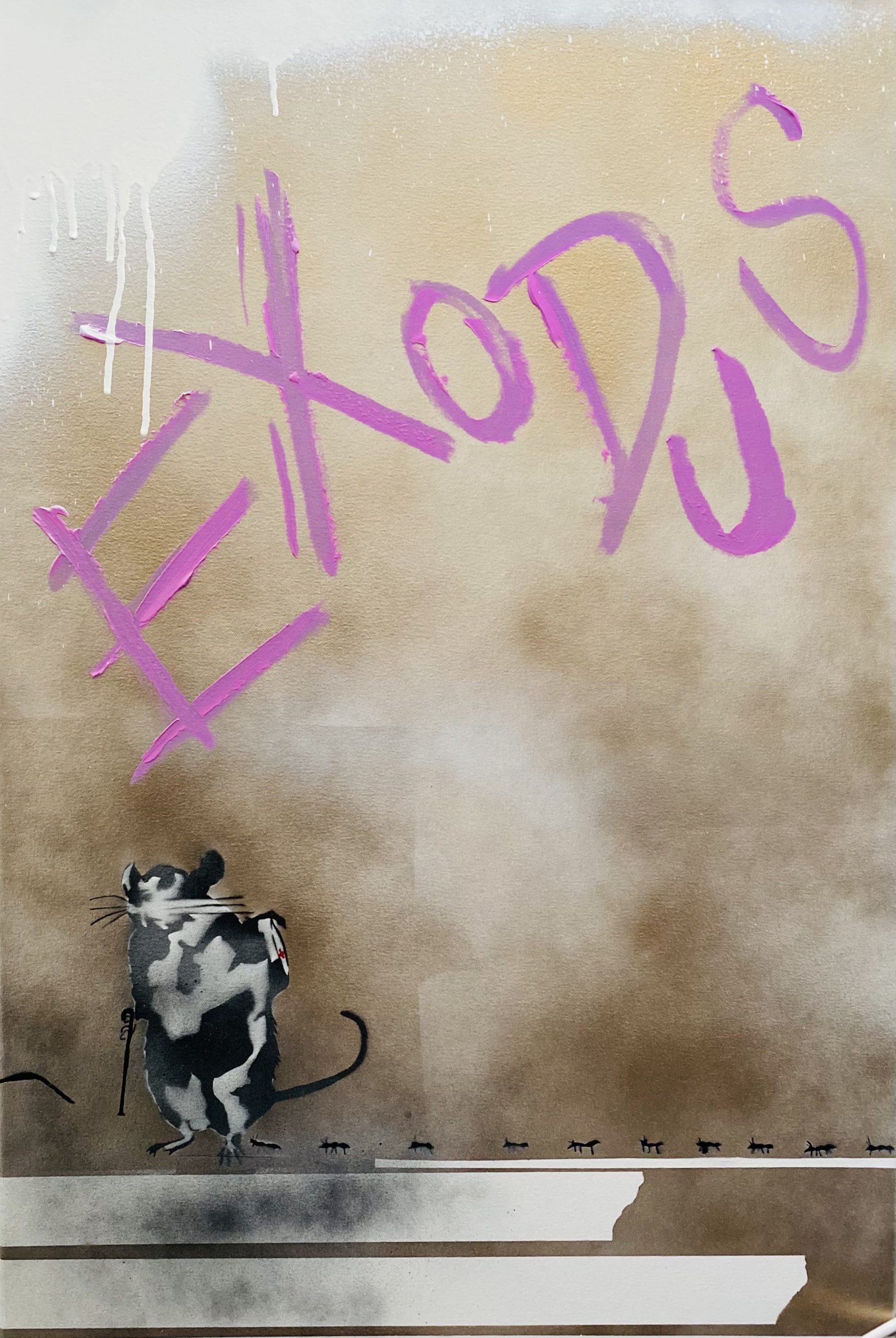 Curator Steve Galindo said that “Listen’s work merges street and beach culture to create unique collectible masterpieces that contemplate the human condition.” Listen aims to push a universal agenda of awareness, hence their art being about the human condition more so than the condition of any particular group, while still maintaining a sense of humor. In Santa Monica, they put up the stencil Happy Gun, which depicts a yellow smiley-faced figure shooting hearts out of a hot pink gun. This piece uses a pop art approach that both emphasizes how disturbingly comfortable we are with violence and as a postulation of spreading love rather than bullets.

Some other pieces of note are Covid-19 and Covid-Safe, which both deal with the pandemic of 2020 feature Uncle Sam wearing a mask, and Forgotten Child is a piece in Beverly Hills off Pico, which depicts a lost child that still retains a joyful heart. Twisted Mick, a large canvas piece available on his site, is a reflection on Listen’s own life. “It’s a happy Disney character born with a pure heart that has gone through a lot to be reincarnated into a human with many dimensions. This is America. We are born into a cold world with beautiful moments,” they explained. Many of Listen’s canvases are striking and colorful, but the figures are depicted in grey and black stenciling, which gives a stark contrast to their composition.

“We are born into a cold world with beautiful moments,” they explained. 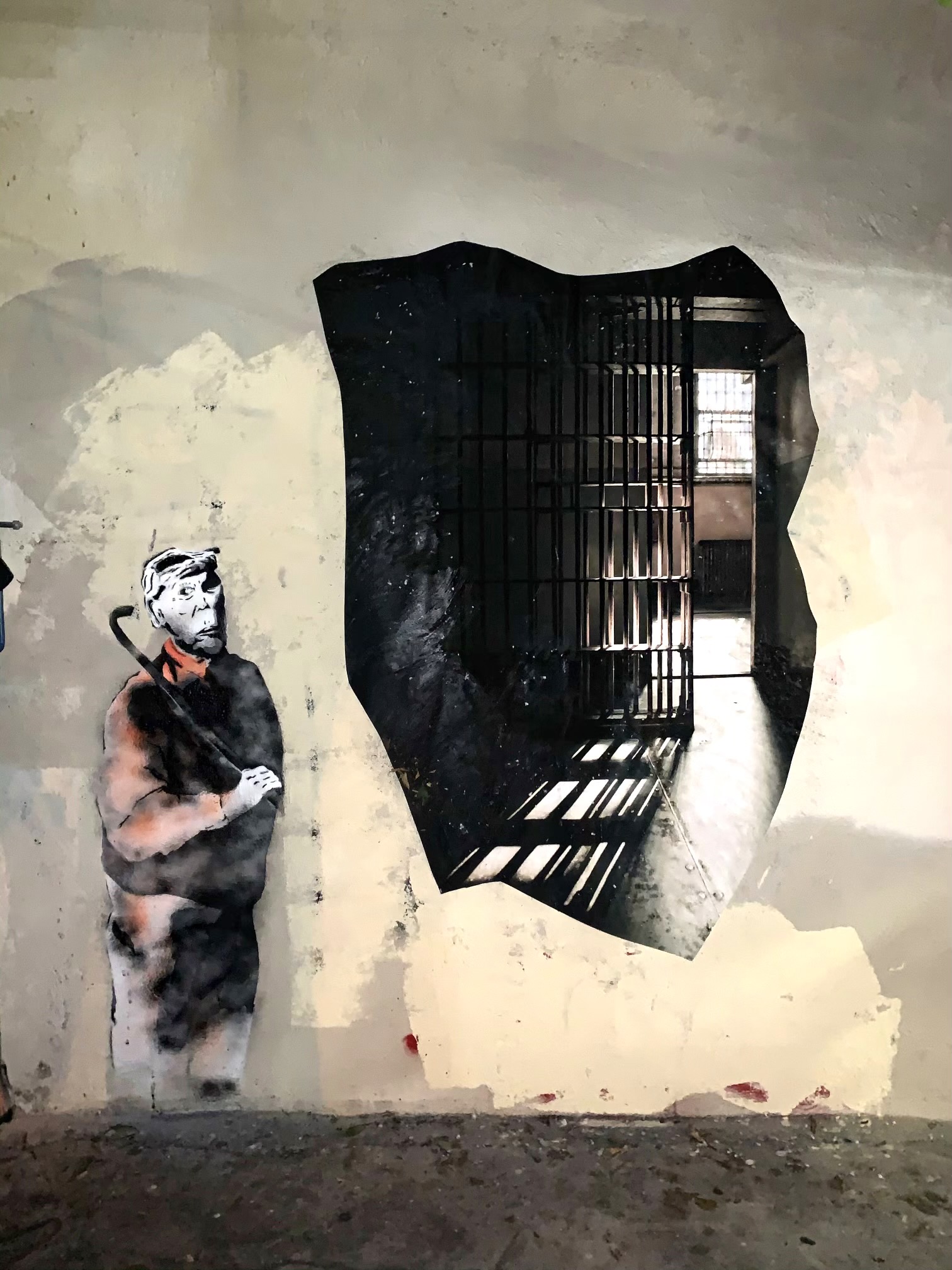 Listen’s oeuvre spans Los Angeles, Chicago, Portugal, London, Joshua Tree, Santa Cruz, San Francisco, Mexico, Spain, and New York. During the pandemic, he showed his work in a gallery for a first time. “The pandemic actually helped me turn my passion into a business,” they said. They have pop-ups coming up at Art Basel and Westside, as well as a show in Austin, Texas. His work is available to view and buy in collaboration with THESTYLEGUIDE and ARTSY.NET. However, they hit the streets to bomb every week, in keeping with the spirit that art should not be relegated to galleries and museums but rather should be for the people.