Los Bravu is the artist name of Dea Gómez and Diego Omil, Spanish artists who have used all types of art forms (painting, comic, scenic pieces…) to find the perfect channel to express their ideas. Inspired by the eternal Renaissance, their creations bring humans to a central spot and represent the ruins of culture and the misery of a civilization incapable of focus and surrounded by constant inputs. However, there is always room for hope. At the end of the day, Los Bravu are here to remember us why being happy and expressing it through art is now more relevant than ever.

How did you start in the art world?

Dea: We met in my last year of university. I was one year younger than Diego, he was already done with his career. And we realized that we had similar approaches, similar ways of understanding things. So, we decided to create together a book in comic format.

Diego: I remember that it was 2011 – during the crisis – so we started as freelancers, we didn’t have a job back then, and we wanted to do something that showcased what we could do. That was the origin of the book, which portrayed many different styles.

What type of style do you think that defines you? You’ve tried out comic, painting, sculpture… is this because you like exploring or for a specific artistic purpose?

Dea: We’re now very focused on painting. But for us the channel is only a way to express a specific idea. For example, two years ago, we did for the first time a scenic piece – because we thought it could only be expressed in that way (and not in any other format).

Diego: We’re open to everything. In the future, we also want to try out video creations. But it also depends on the circumstances, the space you have, the exhibitions… when we went to the Academy of Spain in Rome, it kind of changed us. We could study art in detail, so we used those circumstances to start painting. The opportunity came because we were open to it.

What do you aspire to achieve through your art?

Dea: When we did comics, our editor used to say, “we’re on this because of the fury.” We have a need to do this. Of course, if people like it and we can live out of it, even better.  But above all, there is a need to express ourselves.

Diego: We want to find forms, notes, tell things. Not a specific life story, sometimes it’s just a consequence of the new things we learn or study. It’s a way of using artistic methods to express ourselves. We’re curious so we evolve with our art and the things we learn. We don’t want to repeat ourselves. 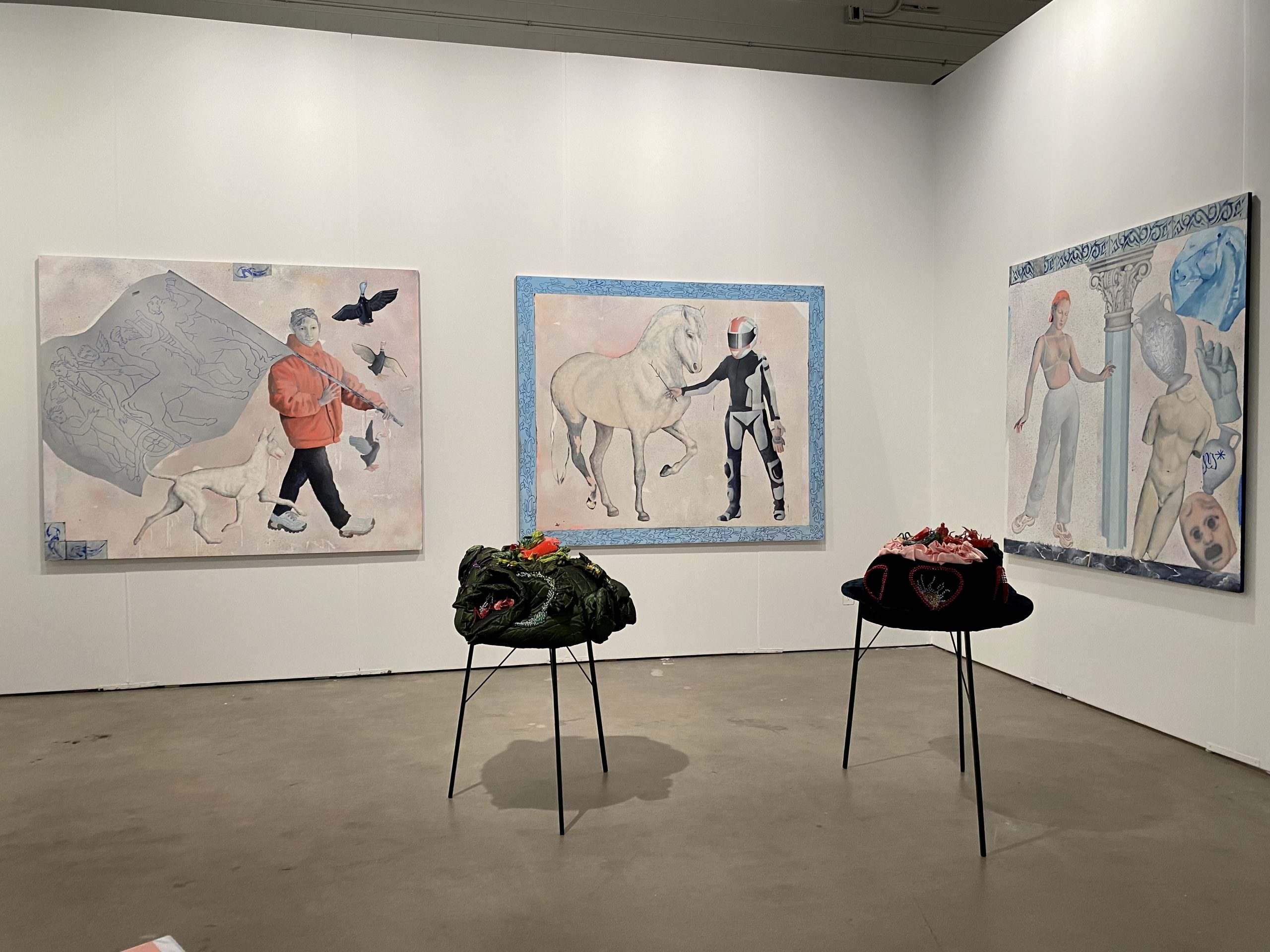 We’re curious so we evolve with our art and the things we learn. We don’t want to repeat ourselves.

You said that you need to learn new things to be able to have new things to tell. In this process, what’s more important: to know or to imagine?

Dea: It’s very important to know through study. When we lived in Rome, we had the opportunity to study the greatest Italian painters: how they captured things, how they ideated. It was critical for us. Currently we’re really focused on mythology and how we can bring it to the contemporaneity. Study and curiosity are fundamental. Imagination wouldn’t be possible without that.

Diego: To imagine is to associate elements in your mind that result in an image that is new. It’s important to study and know, but you don’t have to proof it constantly. Failure and imperfection may show much more than anything else. To understand our pieces, you need to know some history. Without making a connection to that knowledge base, the painting remains only an exercise of potency, but there is no truth on it.

You’ve been clearly influenced by the Renaissance, what drew your interest: the palette of colours or placing the humans in the centre of the composition?

Diego: The Renaissance was the pop of the moment – we realized that we could enrich our work though the work done by the artists of the Renaissance. Progressively we started to use the Mediterranean classical culture, which we feel is quite universal, to express our own concerns. Now it’s a different artistic moment for us. Before it was more obvious, now we find easy to compose without looking at any references, it’s part of us. 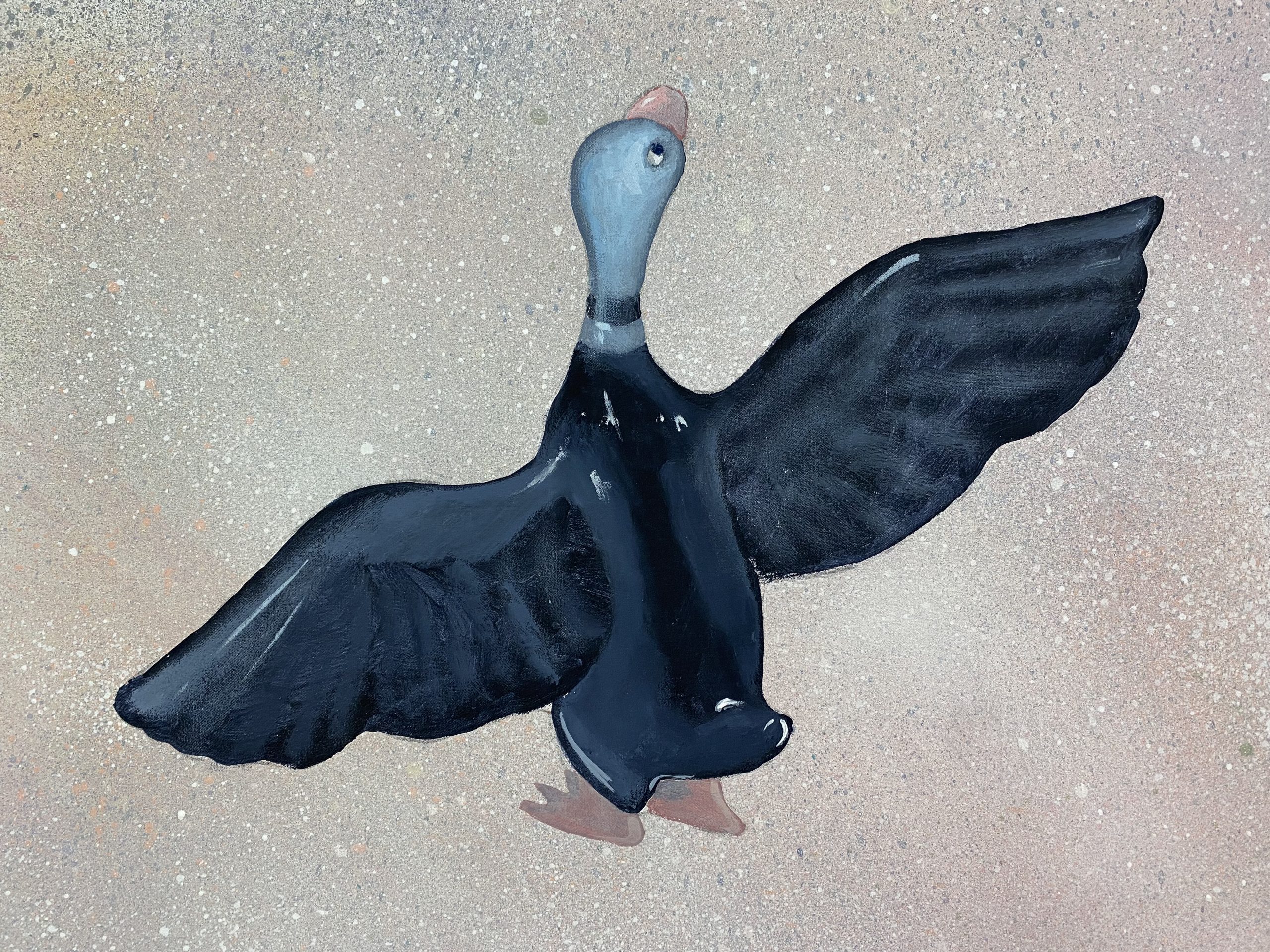 The Renaissance was the pop of the moment – we realized that we could enrich our work though the work done by the artists of the Renaissance.

Between renaissance and contemporaneity there is a lot of space, what parallels and differences do you see?

Dea: For us it works as an idealization of scenes. We talk a lot about a Mediterranean culture in decadence, the ruins of the European culture, the social unrest… we talk about our problems, those of our friends… the world around us. The compositions coming from the Renaissance and the Roman epoque, help us to idealize things by dreaming them. The painting ends in the eye of who is staring at it. We suggest more than we show.

Diego: We move away the specific character and show the archetype – who is taken to the world of ideas. You can see yourself identified in that character, because it represents an idea that you might have in common.

Nature plays a secondary or primary role in your compositions?

Dea: We love nature, especially birds. There is a clash between what’s created by humans (and can be manipulated) and what’s produced by nature (wild, ungovernable, that can’t be owned). In all our paintings, there is a nature element.

Diego: There is also a bucolic reason to it: a culture in ruins and the nature winning over human’s misery. We want to have symbols that help to read the pieces at different levels. There are different layers, textures, ways of painting… so when you come back to the artwork you see different things. You don’t understand it fully at the first time. 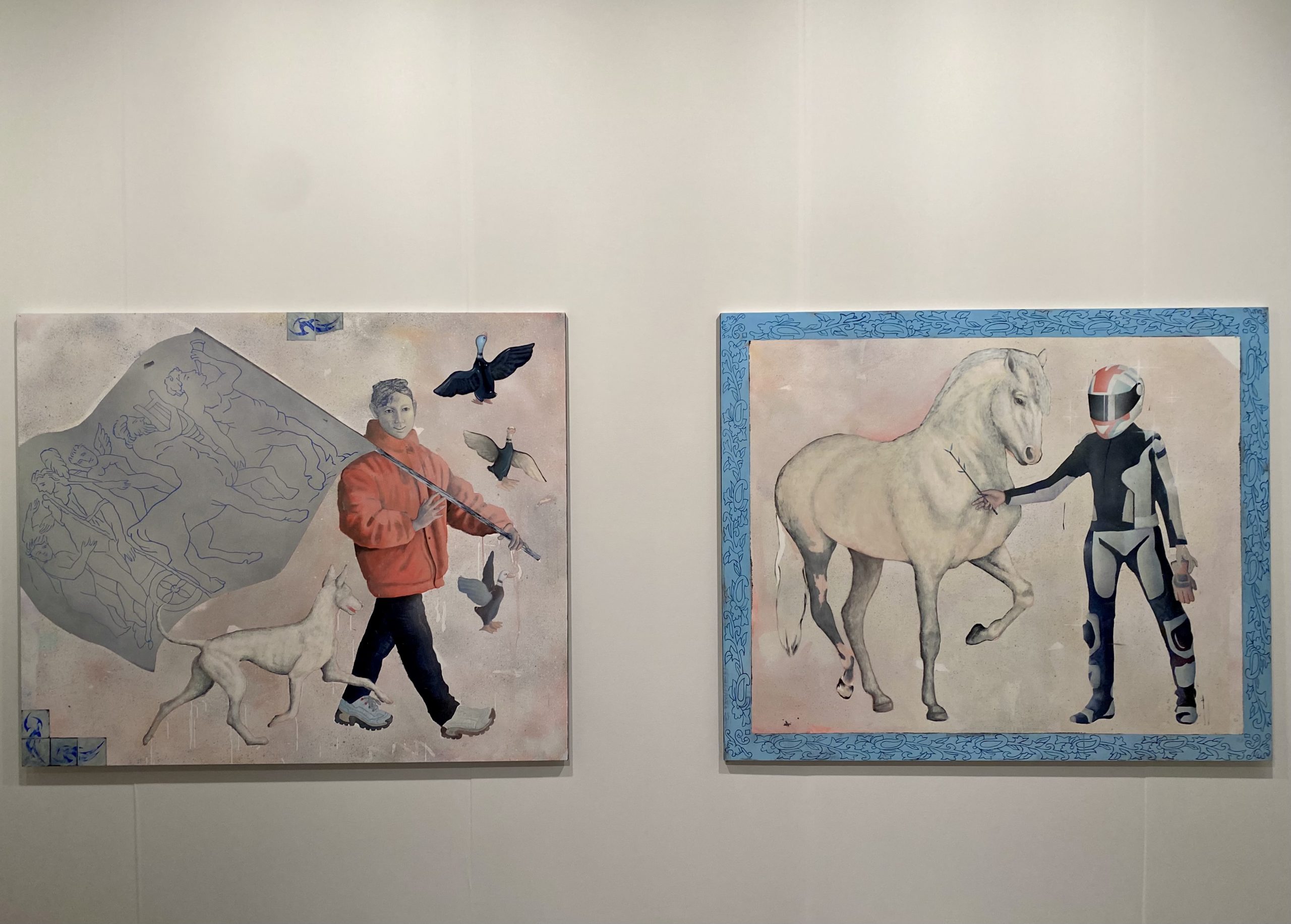 We want to have symbols that help to read the pieces at different levels. There are different layers, textures, ways of painting… so when you come back to the artwork you see different things. You don’t understand it fully at the first time.

Do you think that culture is dead, and that nature has won?

Diego: Culture is a way of controlling nature. The first paintings portrayed animals – it was a way to understand how to hunt them or to somehow control them. I think that culture doesn’t die, it just changes.

Dea: It’s impossible for culture to die because we live through it. We were in a project in Senegal and one of the things that shocked us most was the difference in culture. In the West there is always something new happening, our culture is practically only visual. In Africa, culture happens through music. Our concentrical circles are through the eyes, and for them through the ears. It’s really interesting how depending on where you live, culture is understood differently. 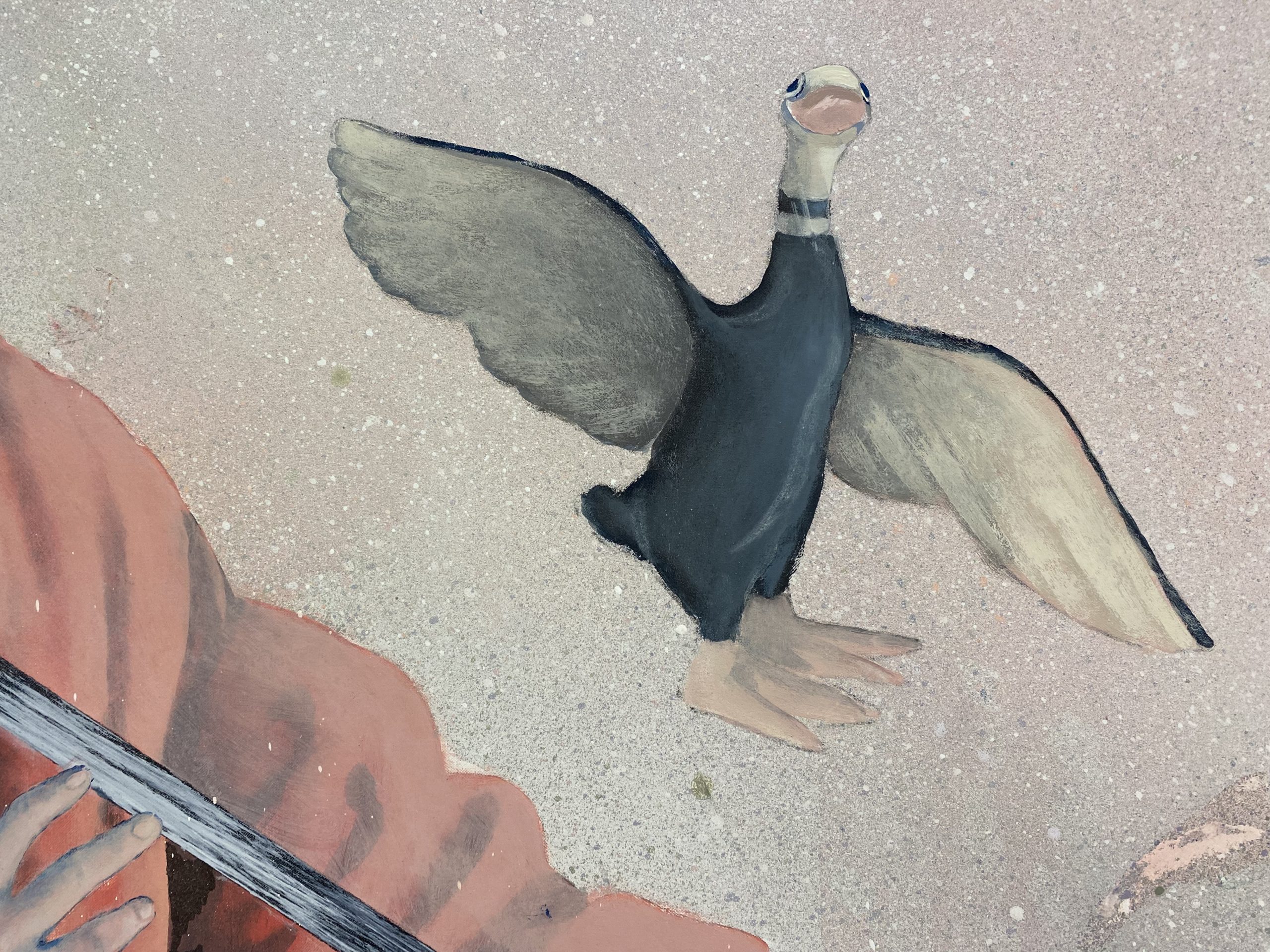 In Africa, culture happens through music. Our concentrical circles are through the eyes, and for them through the ears. It’s really interesting how depending on where you live, culture is understood differently.

Diego: I think that maturity is not physical, but through culture evolution, when you develop the structure enough to be independent. Right now, we’re living an incredible cultural moment, but maybe instead of reading something interesting, we’re looking at videos of people dancing (myself the first one). But we need remain hopeful of our own culture.

Are we overstimulated right now? What role does culture play against that?

Dea: One of our main topics is the distraction provoked by the excess of inputs. All our characters are distracted, thinking about something else. For them it’s impossible to focus as there are too many inputs. Culture is constantly reinventing itself, so there is a lot of individual work required for reading, watching a movie… it’s difficult to focus. 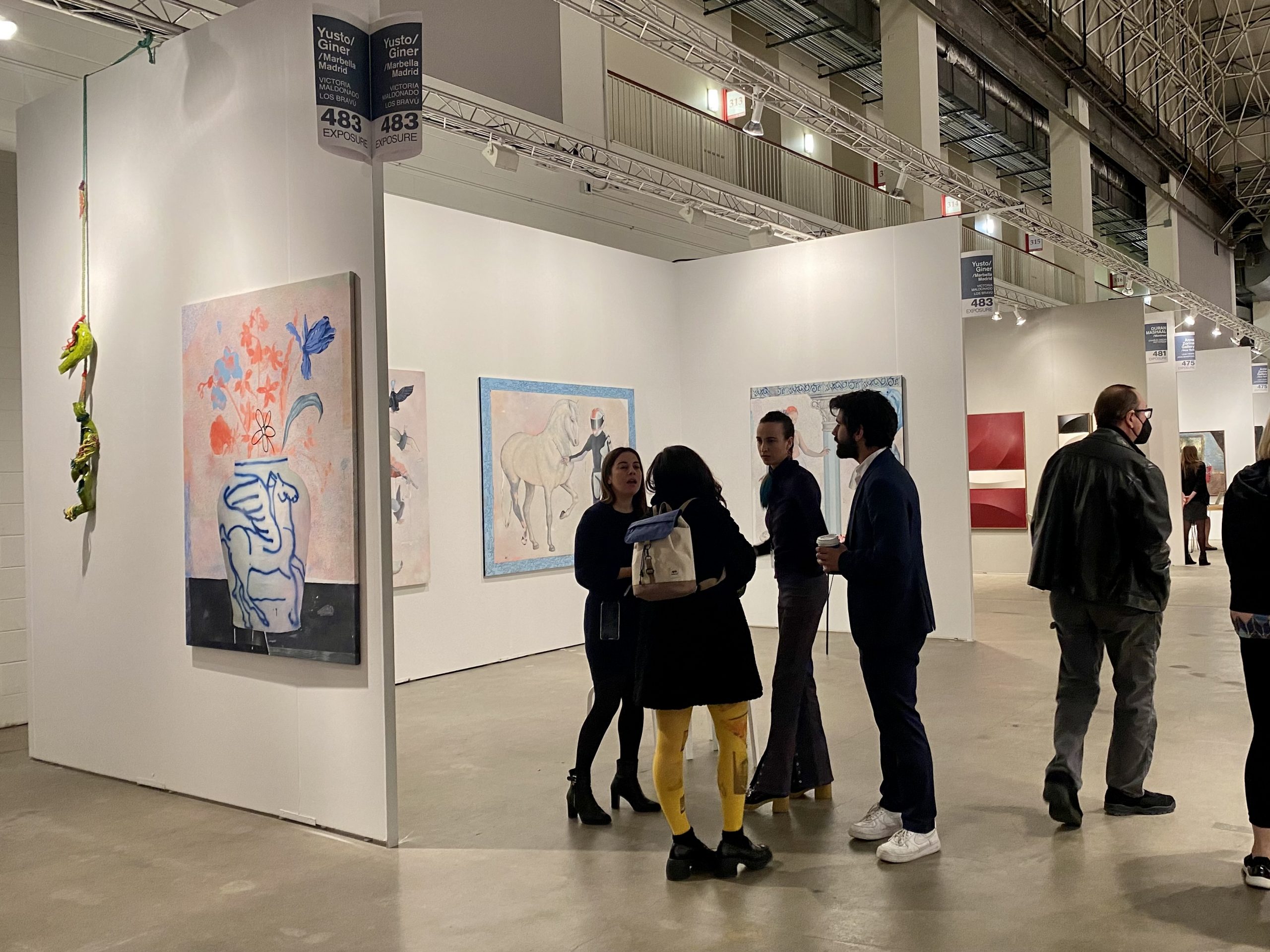 Culture is constantly reinventing itself, so there is a lot of individual work required for reading, watching a movie… it’s difficult to focus.

Diego: Art and culture change and adapt to that. Cinema, songs… are now different. People need more peak moments than before. Painters shouldn’t be looking for their masterpiece, you need to adapt and do more things constantly. It’s like in music, no one thinks about the full album, it’s singles. We need to find a balance – not only economically, but for people to also receive it well.

Dea: Painting doesn’t suffer that much from the need of immediacy. It’s more contemplative, you’re going to encounter a painting more than once. For us it’s important that there are enough elements to make it interesting.

How do you want to be remembered? Or asked a bit more dramatically, what do you want your gravestone to say?

Dea: If we have descendants, I’ll ask them to get mummified and placed in a painted sarcophagus. It’ll be my heritage for them (laughing).

Diego: I want people to remember us for the happiness of living, and that we really squeezed life. We don’t want to be remembered for a specific painting, but for how much we enjoyed life. 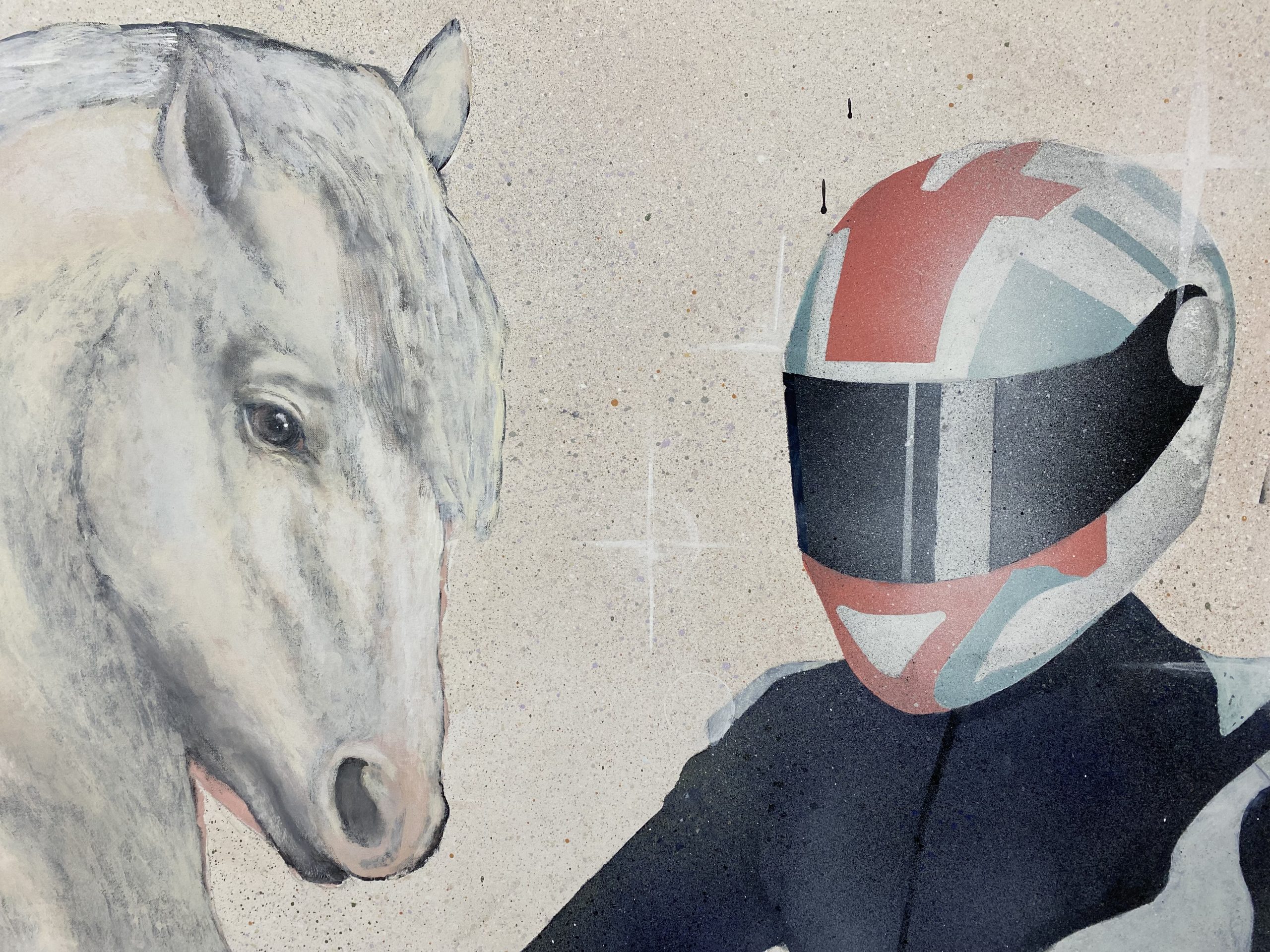 We don’t want to be remembered for a specific painting, but for how much we enjoyed life.

Dea: I think that when you grow old, having an artistic hobby is valuable. You have something to still do. Let them remember us for that endless curiosity to keep doing these weird things until the very last minute.

Diego: I like a quote that says: “They ask me why I’m so happy: it’s because I sing, I dance, and I joke around.” That’s our intention: we’re here to be happy.

Belén Presas was born in Vigo, Spain in 1992. She’s a journalist and has worked in media outlets, international organizations and currently she focuses her activity at the private sector, specialized in the areas of human resources and corporate communications. Belen loves art and writing and recently published her first book.