“Moniker?! Who is this Moniker?”, one New Yorker queried me as I wielded advertisements at passers-by, in the hopes of procuring prospective visitors. To those unfamiliar with this term, a Moniker epitomises our civilization’s universal trait of labelling an alias or handle for someone or something.

It is quite the antithesis to your typical white wall gallery/art fair, with a primary focus on telling the story of street art and aiming to advance urban art through its ability to inform political expression, and social dialogue.

Hailing from London, where it debuted in 2010, Moniker is also an urban contemporary art fair with its roots embedded in graffiti art. For its 11th edition, and 2nd year in New York, Moniker settled into the intersection on Broadway, showcasing 26 exhibitors, four special projects, a variety of panels, and a curated series of talks titled ‘The Art Conference’. It is quite the antithesis to your typical white wall gallery/ art fair, with a primary focus on telling the story of street art and aiming to advance urban art through its ability to inform political expression, and social dialogue.

I was recruited onto the Moniker team last year, through my friendship with Honor, (one of the members of the all-female crew who run Moniker) with whom I studied Art Foundation back in London. Knowing that I was now living in Columbus, Ohio, she contacted me to see if I wanted to embark on the week- long mission of interning at Moniker in Greenpoint, Brooklyn in 2018. I had never visited NYC, so I was entirely elated at the prospect of such an endeavour.

Moniker 2018 proved to be an absolute, all around hoot! Of course I wanted to be a part of their second NYC installment.

Moniker 2018 proved to be an absolute, all around hoot! Of course I wanted to be a part of their second NYC installment. Roles for those interning included exhibition invigilating, visitor greeting, artwork and merchandise sales, assisting exhibiting galleries, and assisting during production and pack-down. I however was stationed primarily on the front desk, both this year and the last. I found this position quite riveting. The front desk is the first point of contact for visitors and exhibitors, thus enabling one to form rapports with anyone coming in or going out. There was absolutely no escaping my partner and I at that front desk.

Though last year’s Fair in Greenpoint had its own quirks and charms accompanying the vast open space of the Greenpoint Terminal Warehouse, I personally preferred the nooks, crannies, and winding staircases of this year’s location in the multi-level, shop front-esque establishment of 718 Broadway. This year’s increased sales and foot traffic further testified to the superiority of this new location. On a personal note, it was magical reconnect with artists I had met and loved last year. The Fair in Greenpoint was characterised by its open air, light, carousel bar, and array of food stations. I would liken entering 718 Broadway to entering someone’s home, with four floors to explore, including a colourful dungeon, where the bar was stationed, and all the talks were held.

A negative aspect of running the front desk is that it leaves one essentially oblivious to the goings-on inside. Therefore, I was elated when I had the opportunity over the last two days to venture into the fair and aid artist Christian Boehmer with his exhibit. Boehmer created a series of paintings and drawings purely for Moniker, depicting figures with red hands and paper bags over their heads.

The choice could also be translated as being indicative of our society’s growing inability to communicate and emote.

Boehmer is renowned for his photorealistic portraiture, but he revealed to me that he soon grew weary and wanting for challenge, and thus wanted to paint in a more abstract style. He achieves this by including a paper bag motif, which acts to remove the subject’s identity. The choice could also be translated as being indicative of our society’s growing inability to communicate and emote.

The red hands symbolize the honorary colour of Moniker.

“Why paper bags?” I asked. “Because each is unique!” he replied. The creases and the crinkles will never be the same.” The red hands symbolize the honorary colour of Moniker. Boehmer also considers it the brightest and boldest of hues, and thus the most captivating and dominant colour, acting to direct the audience’s attention to the actions of the subject.

Hand signs are a universal language, and Boehmer utilises them and their positions to tell the story of the image, consequently alluding to the universal nature of street art. In titling his works, Boehmer further tailors the collection to New York by celebrating hip hop (which originated in the Bronx) and naming each piece after a famous rap song, such as ‘Body movin’- by the Beastie Boys.

I also immersed myself in the world of artist Siris Hill whilst venturing from the front desk. Based out of his studio/ bedroom in Nottingham, UK, where years ago he had once been ‘sleeping rough’, Moniker was his first ever public exhibition, his first time travelling in over 14 years, and his first time bringing his digital works to life in the form of 3D light boxes.

Motivated by a deep love of 17th century artists, Hill’s incredibly intricate portraiture emotively explores the effects that psychological conditions have on an individual, and by extension his own reality of living with mental illness. Utilising painting as a form of therapy, he seeks to investigate with his work the social hinderances and loss of identity his illness can create.

I was particularly gobsmacked by his work. As a passer by one might naively assume it was just photography of a painting in a lightbox. Alas, Hill taught himself the fundamentals of painting through study of the Renaissance artists, such as the techniques of Rembrandt, whilst learning to transfer these skills and apply them to a digital medium.

He chose to undertake digital painting after being unable to work around the fumes of oil paint. His set up includes a graphics tablet and pen that records his hand movements by replicating his strokes within the software on the screen. He even created his own digital brush to replicate the brush strokes of oil painting as closely as possible. All his work is hand painted in the likeness of old Master technique using discarded portrait material as his subject.

In a matter of minutes her dress became the canvas for a flurry of neon spray paints, the spectacle of which, heightened by the frenzy of photographers, entirely halted traffic.

The most memorable moment of Moniker was witnessing a most beloved, and absolute icon of a friend Kalin Hart, have her white petticoat dress spray painted by artist Henning Feil right outside Moniker. I had glimpsed Kalin gliding about earlier with a hazmat mask in tow, ready for this spontaneous showcasing of the wonders that the marriage of graffiti and fashion can create. In a matter of minutes her dress became the canvas for a flurry of neon spray paints, the spectacle of which, heightened by the frenzy of photographers, entirely halted traffic.

As my second year being immersed in the world of Moniker, I am grateful for all the opportunities it has afforded me. From meeting truly wonderful, even bizarre individuals, to gaining new perspectives and appreciations of urban art. I’ve been able to mingle with the artists, and hear profound insights during the ‘Women in Art’ talk, and witness the spontaneous spray painting of Kalin’s white petticoat dress on the street of Broadway, to carrying 20 chairs individually up four flights of tiny stairs during pack down. Ultimately, it was very heart-warming and satisfying to see the work of the artists pay off and see their sense of triumph over having sold a work. While stationed with Boehmer, I utilised some time to practice my rarely- used German, and was intrigued to have witnessed his evolving emotions as the process of selling two of his paintings played out. When the two had finally been sold, for me there were few more delightful moments of the fair than when he declared, “Sieg!”, meaning “Victory!”. 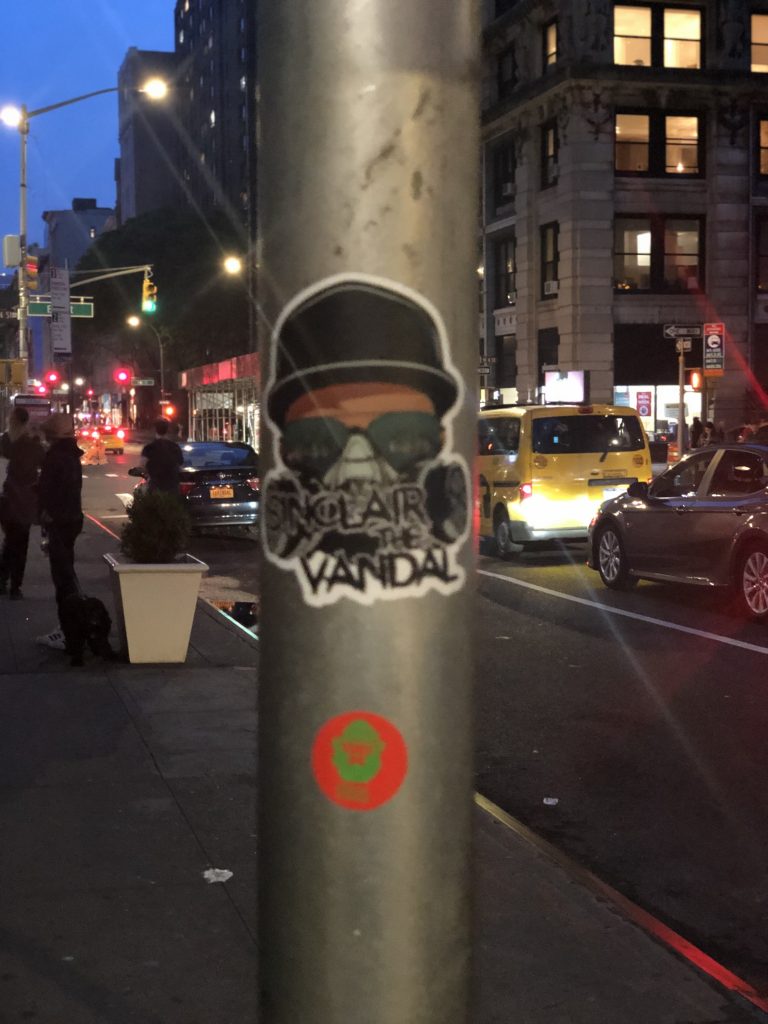 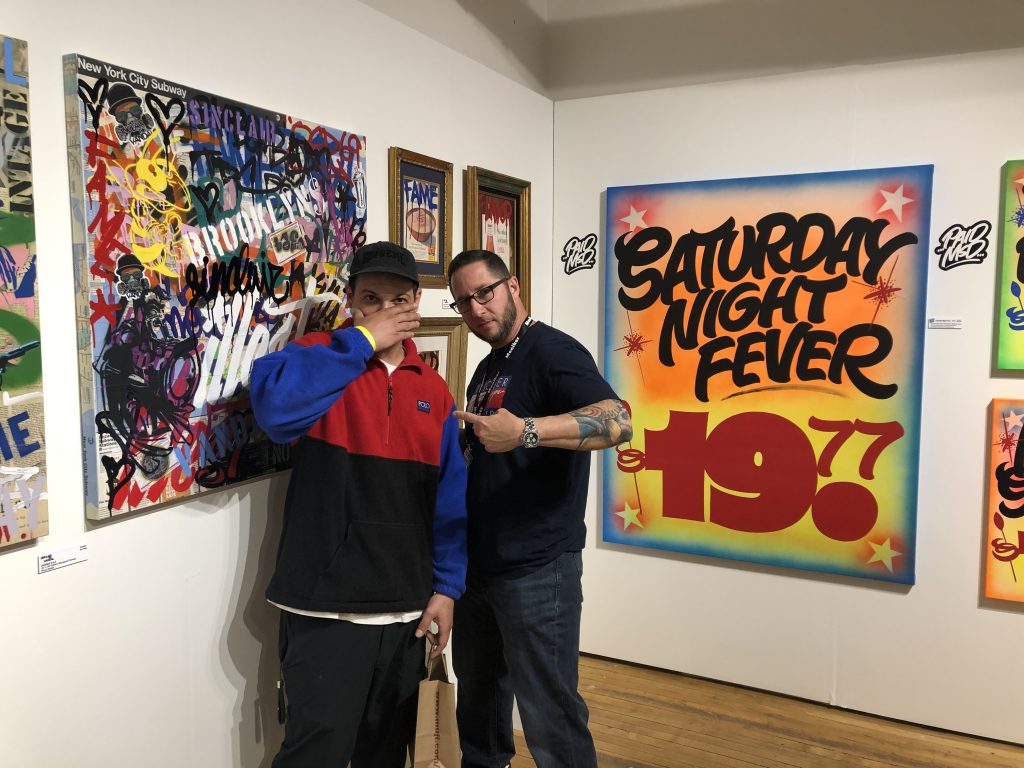 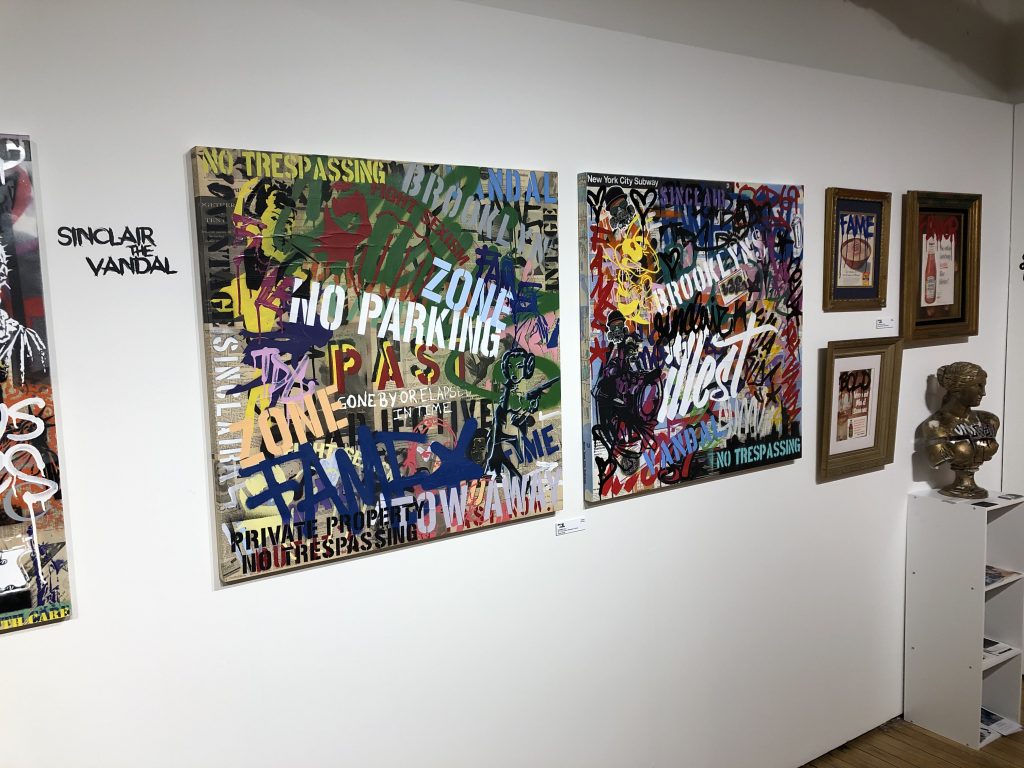 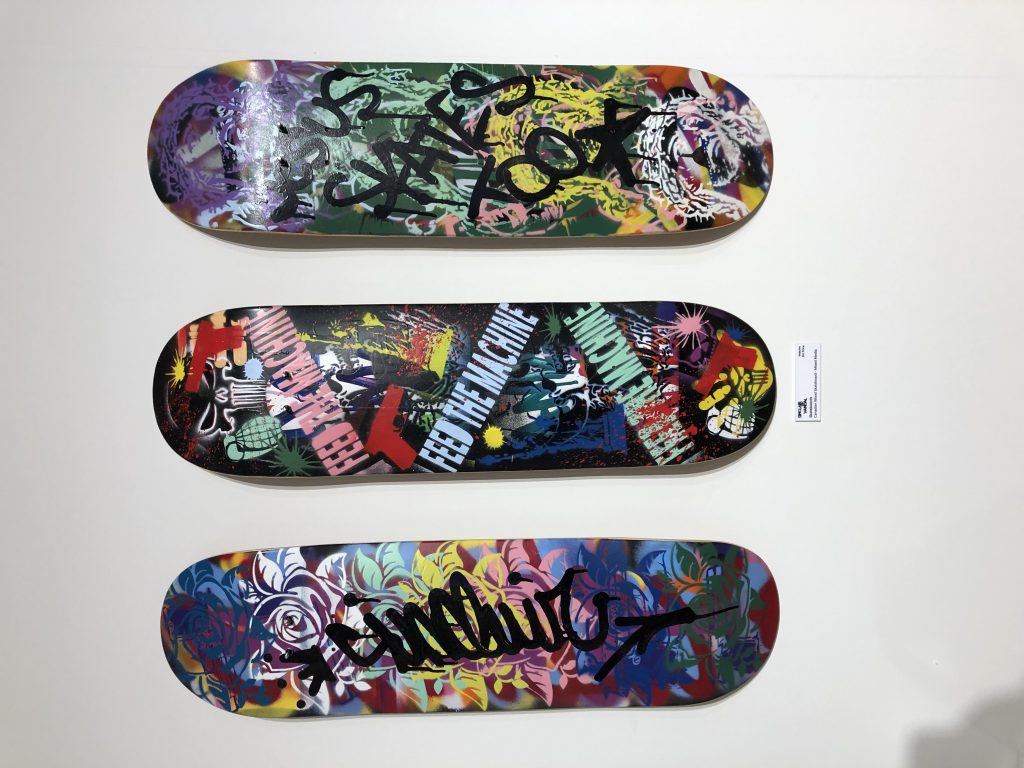 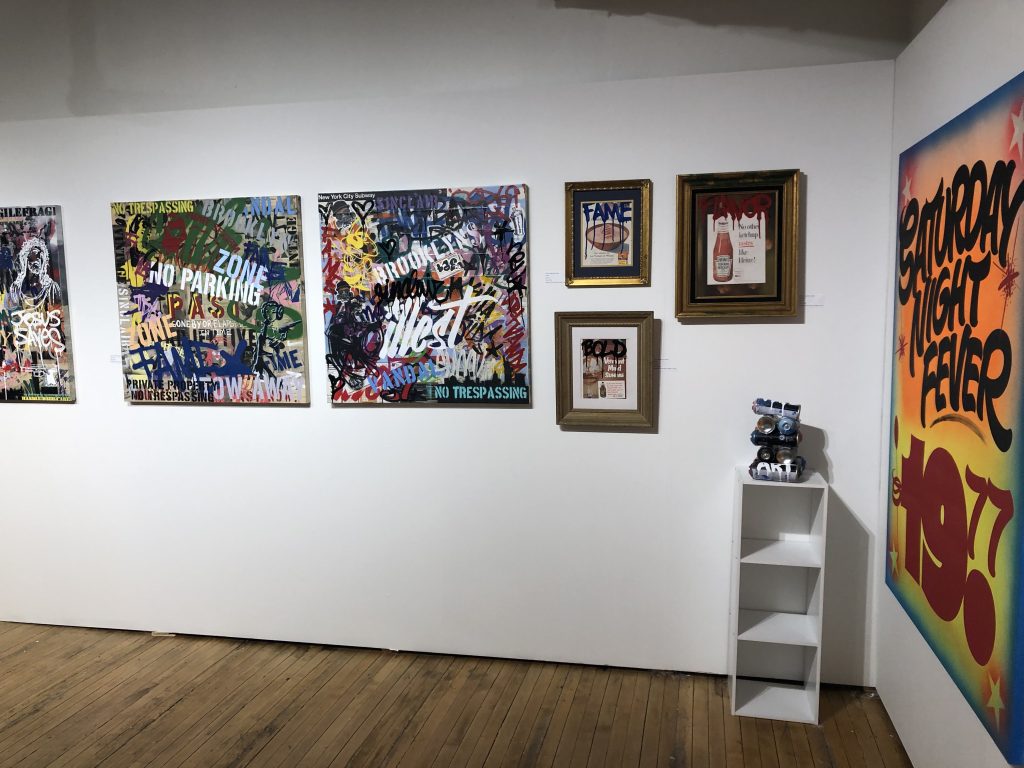 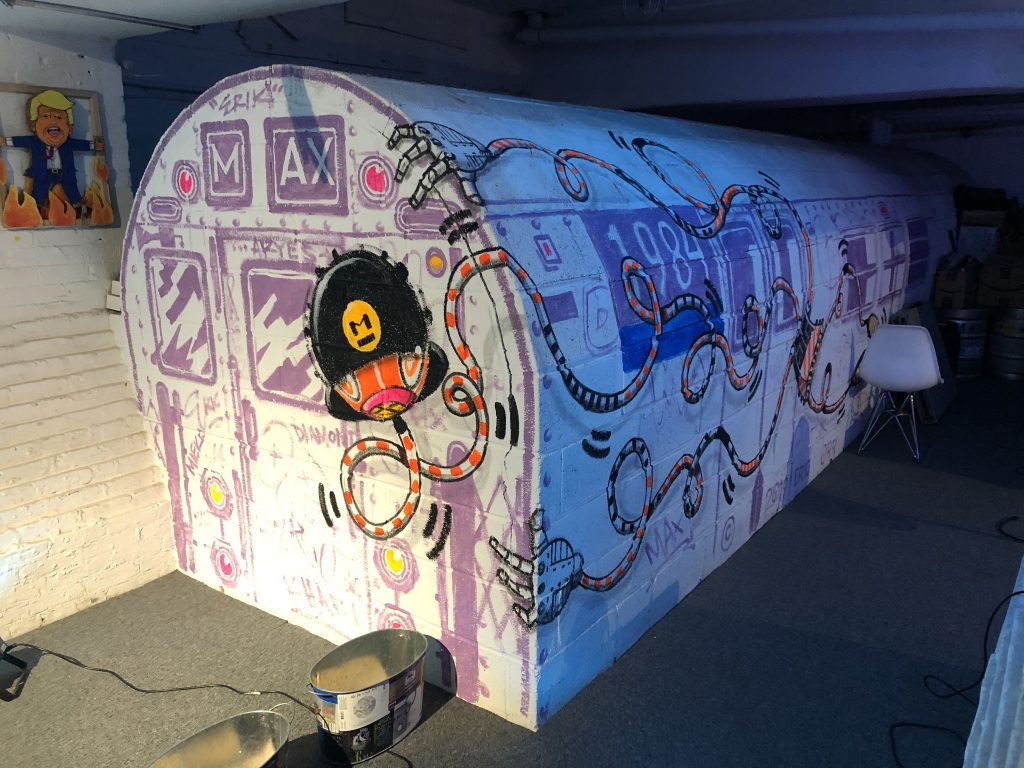 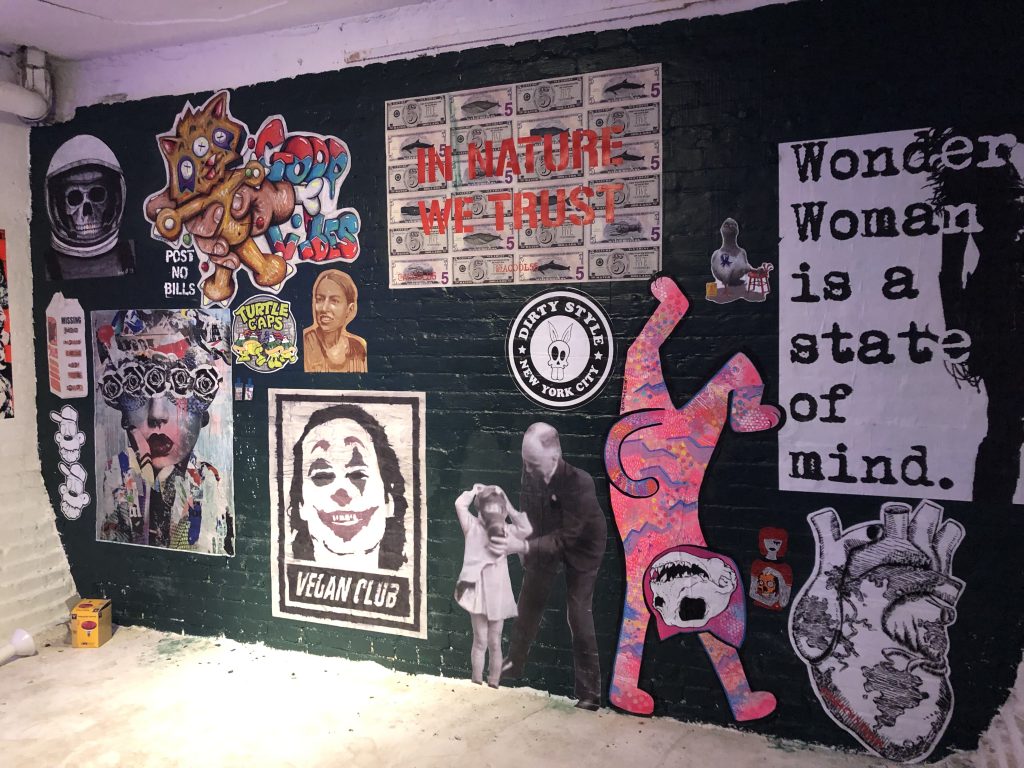 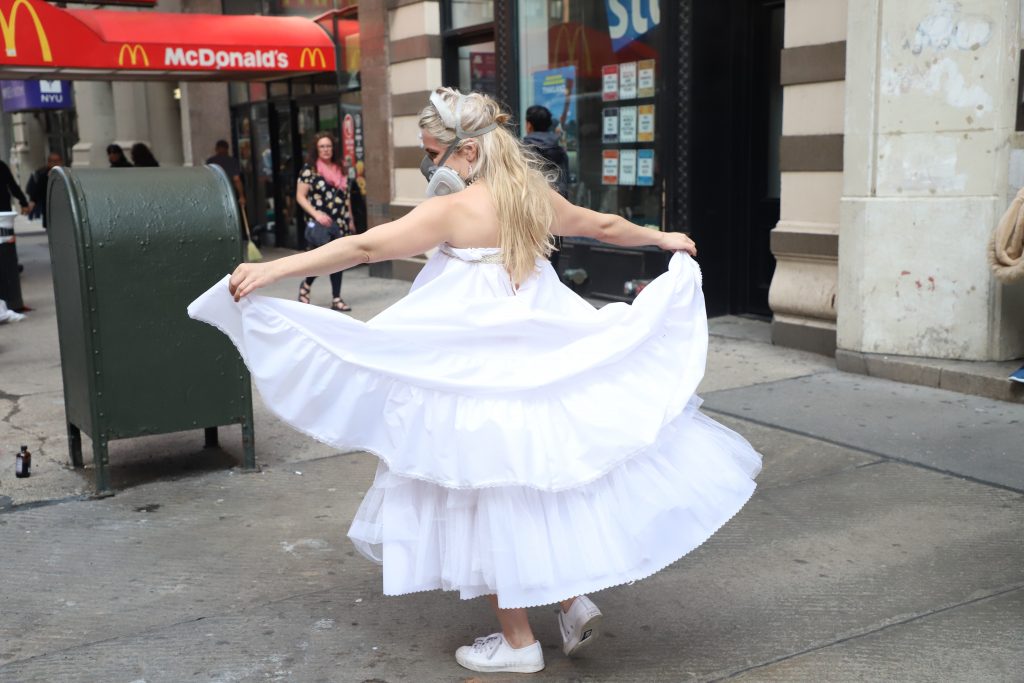 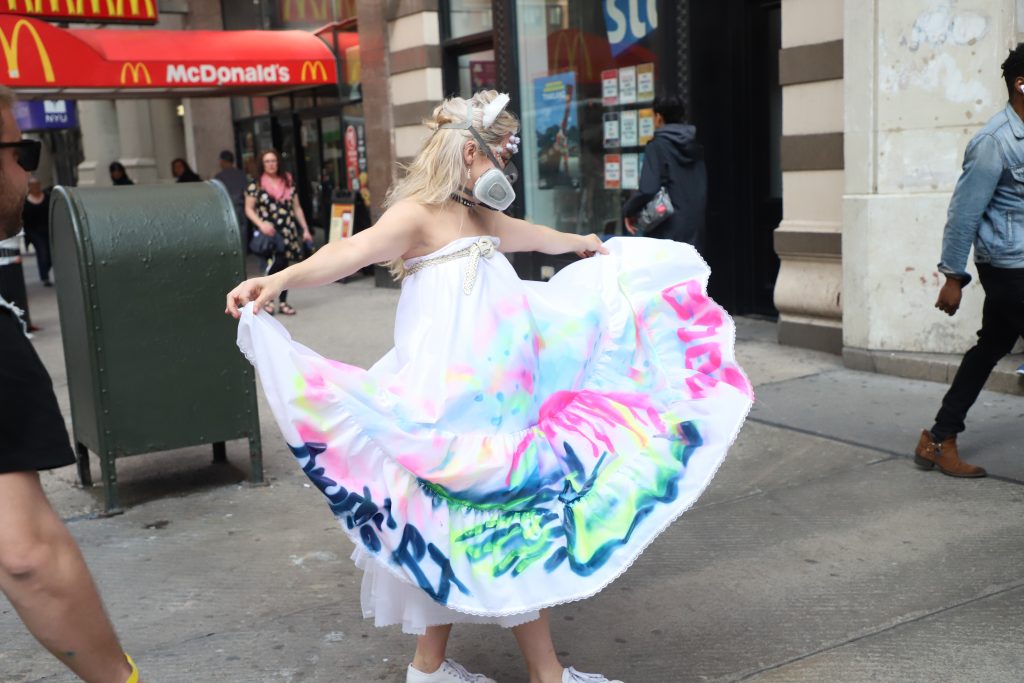 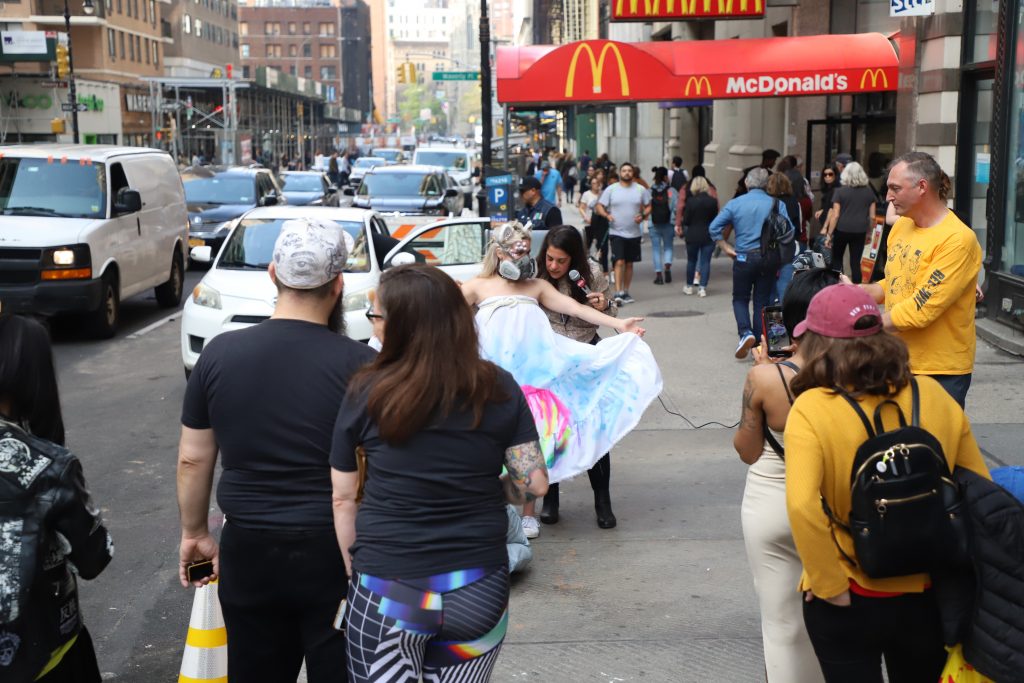 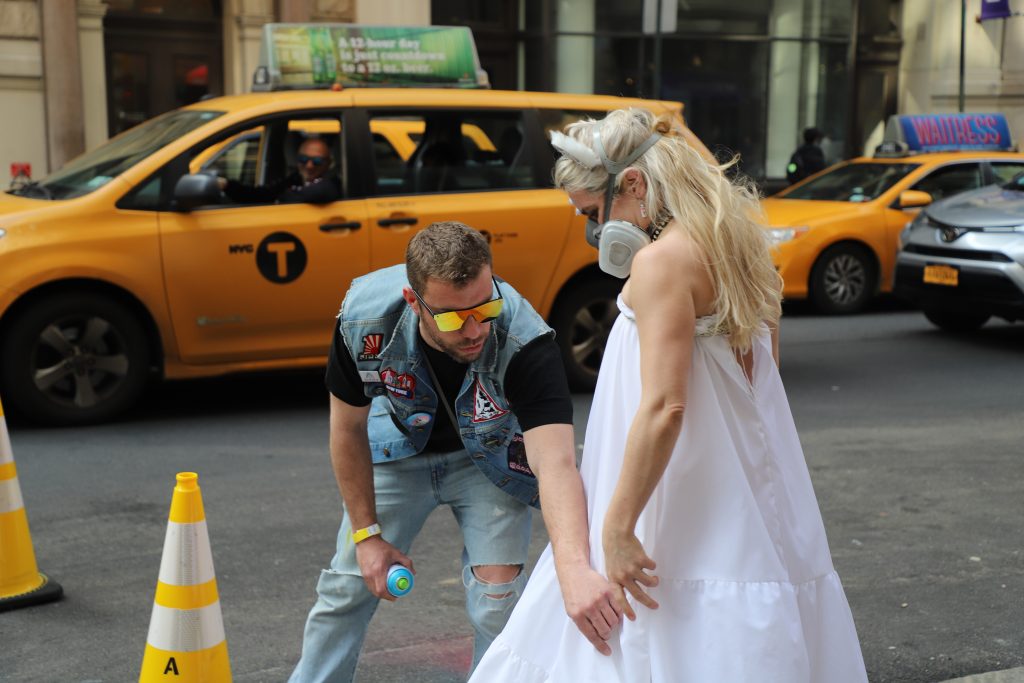 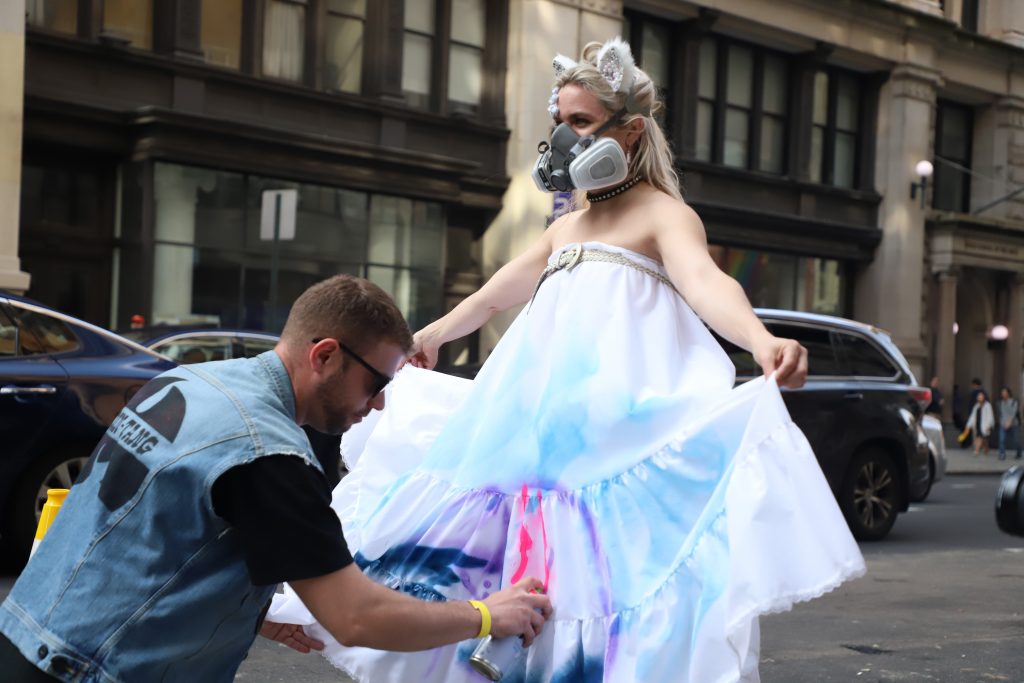 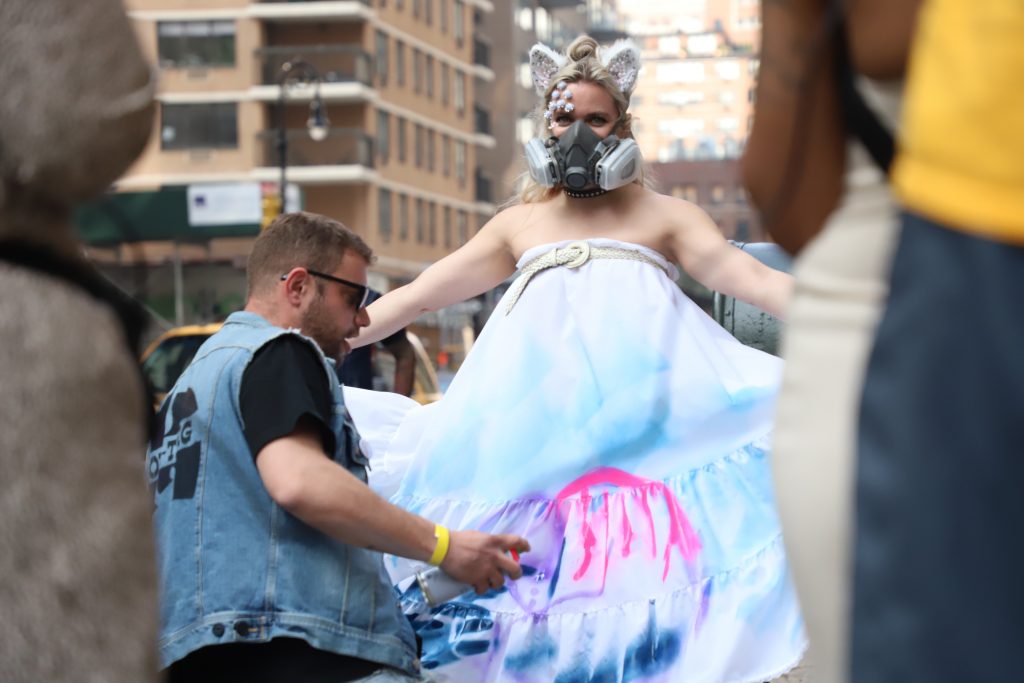 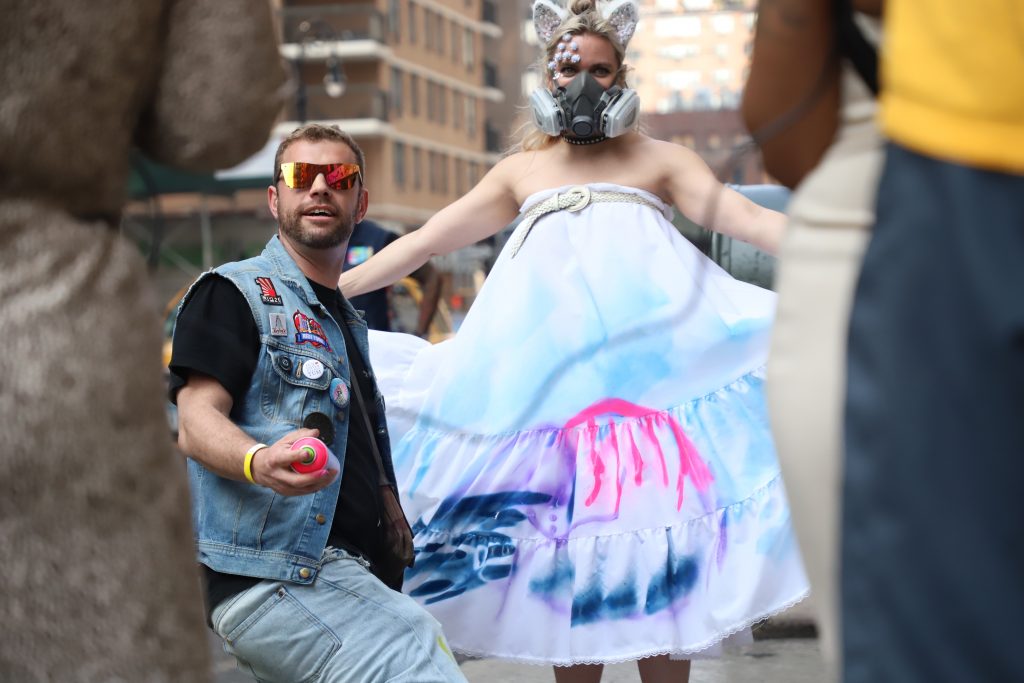 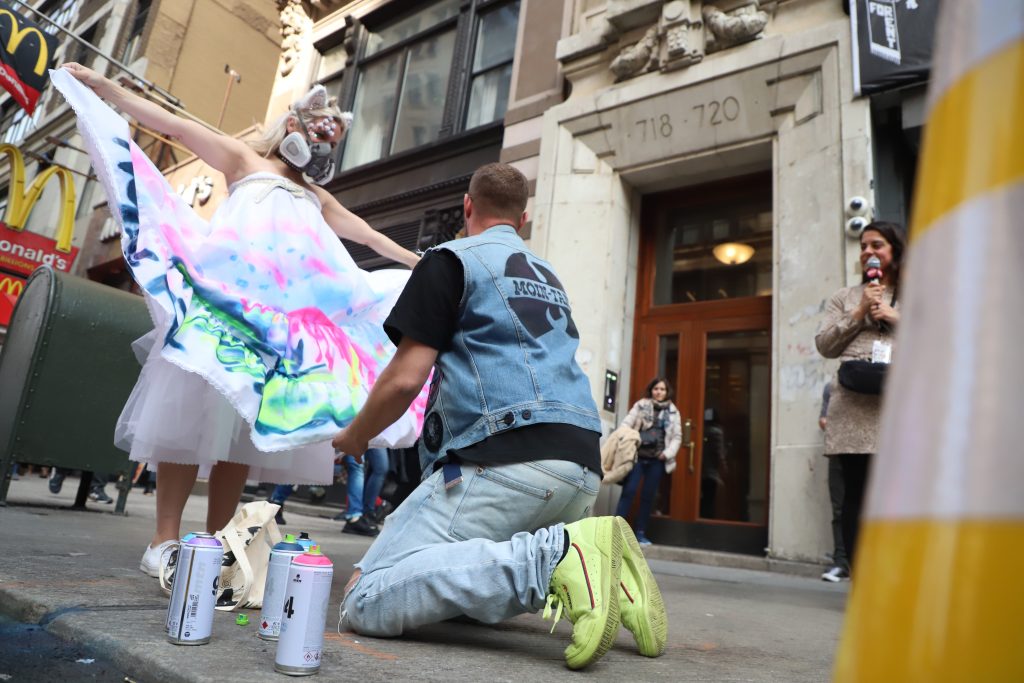 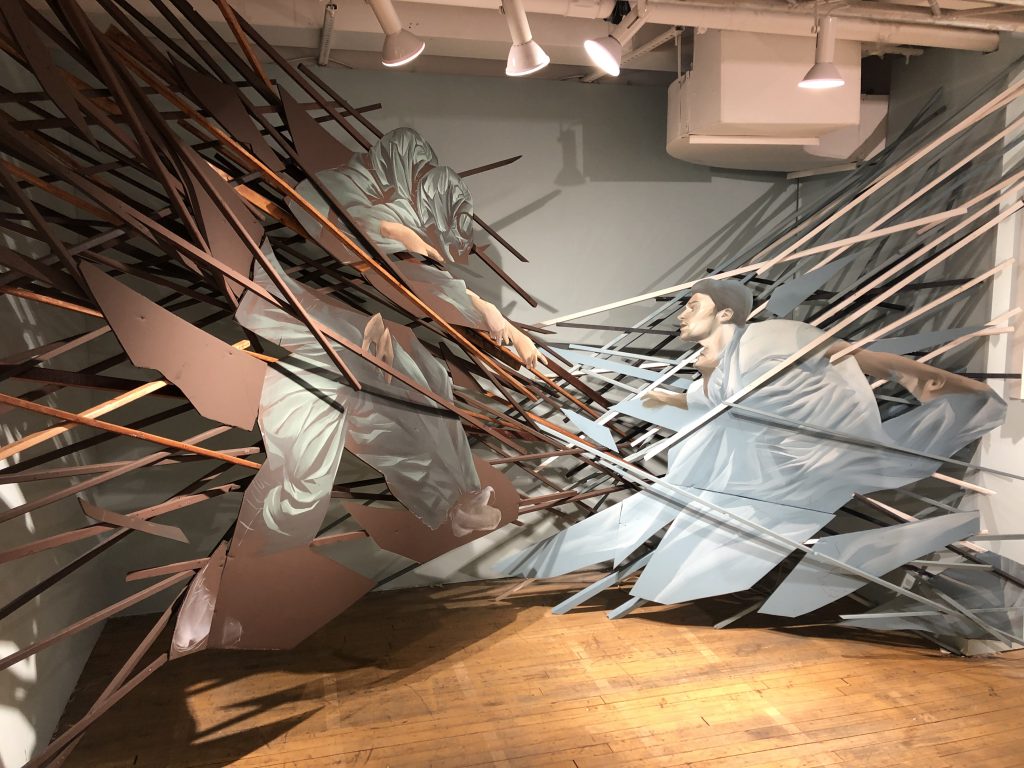 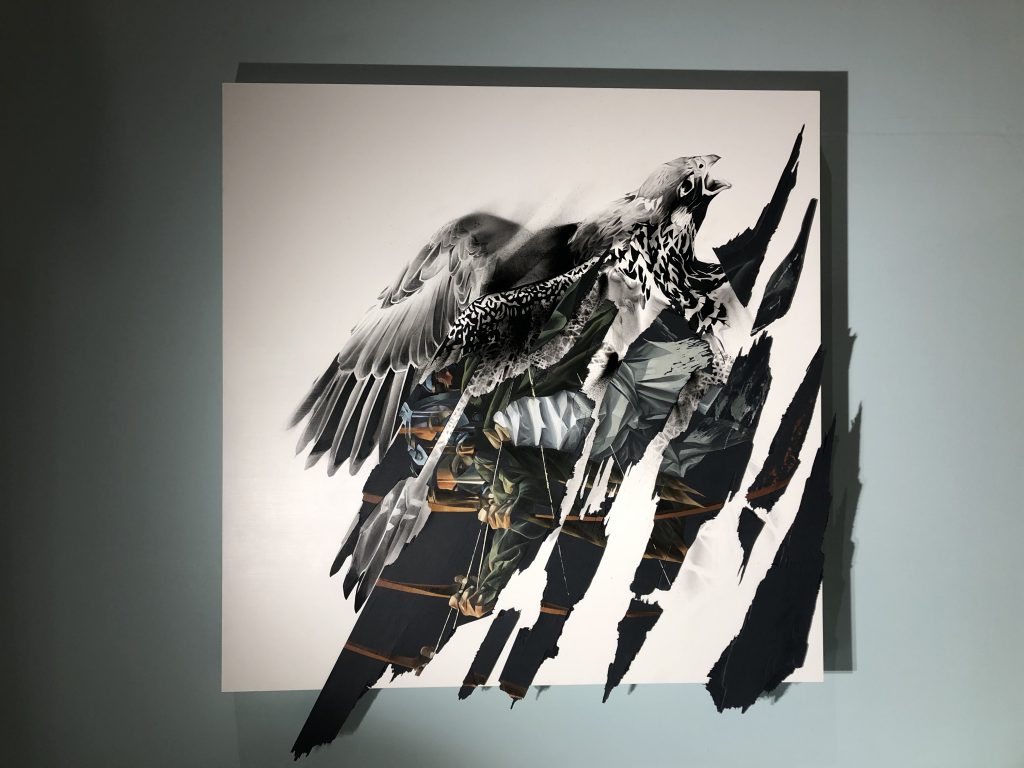