CORAJE! In Spanish it means courage. In Cuba it means “Keep fighting.” 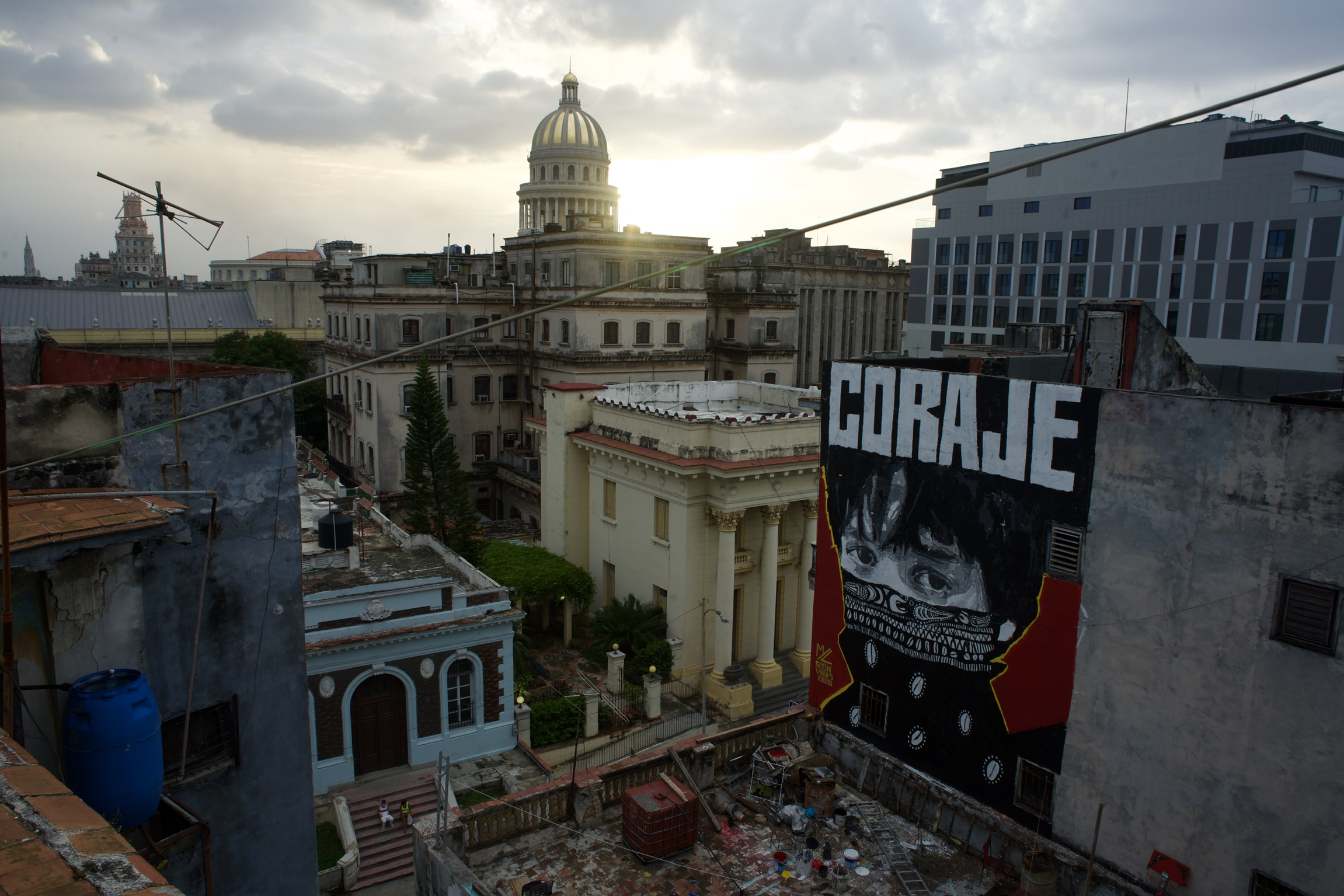 In May 2020 a large intervention by Mr. Myl appeared high above the streets of Havana. The image of a young boy with his face covered by a bandana and the word Coraje in large bold letters. Two months into the Covid-19 pandemic this was a message for all Cubans, for all people. A year later, when Cubans took to the streets in a historical demonstration of discontent, Coraje was demonstrated in a manner that has not been seen in decades. At a time of shortages that included basic necessities like food, medication, electricity, and freedom of expression, Coraje is the one thing the Cuban population showed in abundance.

As Mr. Myl said, “This year has been a surprise for most of us. During the first wave of the pandemic I decided to paint Courage again, one of my favorite images recontextualized for the moment. In Cuba you have to live with Courage all the time.”

At a time of shortages that included basic necessities like food, medication, electricity, and freedom of expression, Coraje is the one thing the Cuban population showed in abundance.

Havana, Cuba. A city with a built-in stereotype. We expect old cars, decaying architecture, and a system which governs dogmatically. Yes, you can find all that and more, but it is the more that may be the most surprising. Havana is not a dying city aging as we photograph; it is a living city. A city of over two million people and a generation that is not willing to quietly let things continue down the path of silenced obedience. Long before the recent demonstrations for personal freedom, this generation of artists was willing to have their voices heard in the street. Now it seems they were not the only ones.

The shouts heard in the streets were “libertad,” freedom. Freedom to express what you think and feel even if it doesn’t align with the official decrees of the revolution. In a country where art is defined by law, the government dictates who has the right to sell their art or who can show it. Until July 11, 2021, artists were more than on the front lines, they were the front lines. 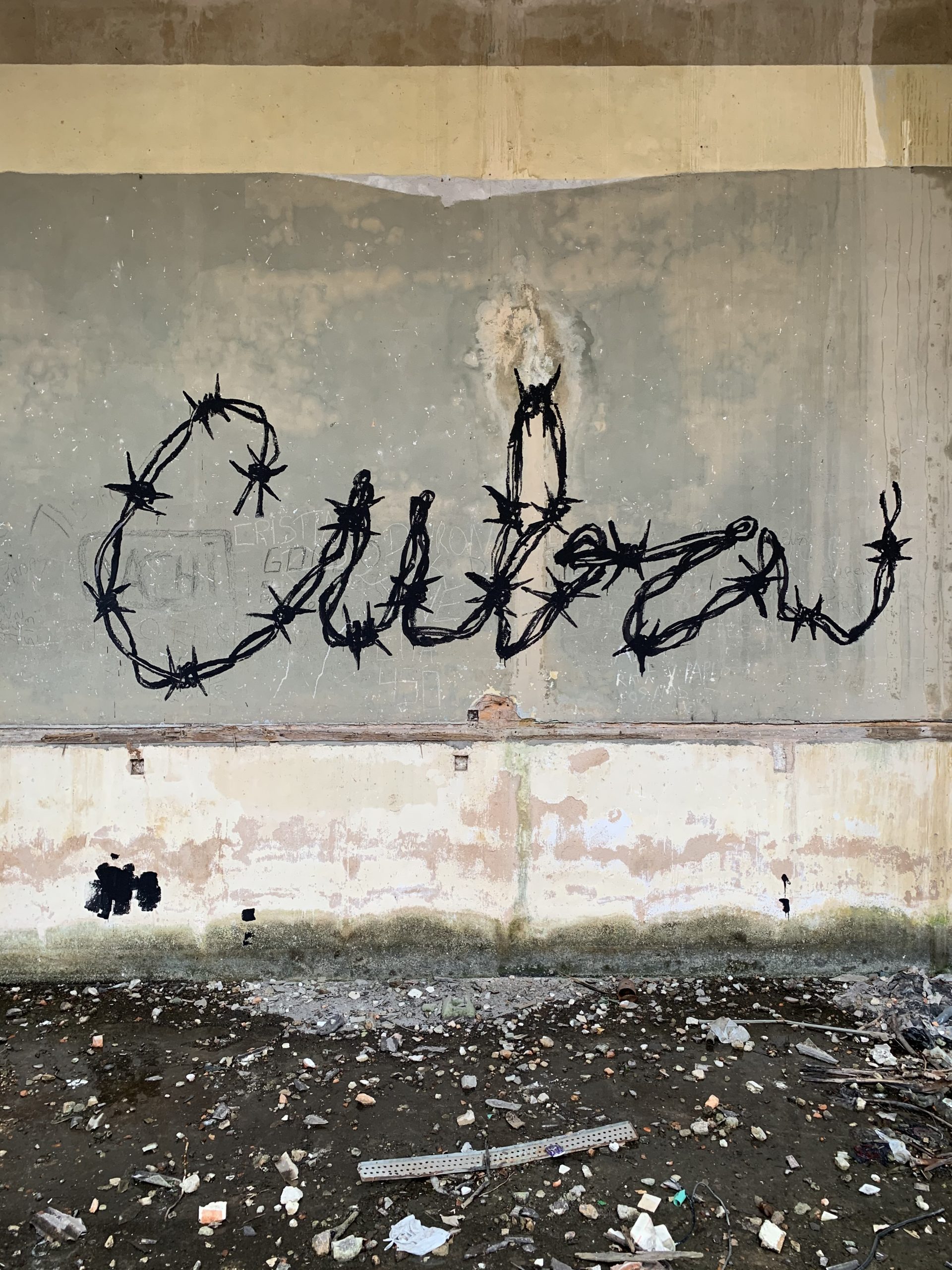 I first met Myl in June 2018 when I started my project that became the book Painted Walls Havana (all subsequent quotes of Mr. Myl come from this book). I organized a beer and pizza dinner for many of the local painters. The evening was lively and energized. Myl sat at the corner of the long table and listened and almost seemed to appear like a spectator rather than a participant. He does not look like many of his peers. Short hair, no tattoos, no loud fashion statements. He is more likely to walk with the flow of traffic rather than skateboard against it. If you saw him in the street nothing would scream out nonconformist, agitator, criminal, or “street artist.” He lets his work speak for him.

It is quite common for foreigners to come to Havana with big plans that go nowhere. I guess I passed his credibility test because shortly afterwards he was giving me the private contact information for artists around the globe that had painted in Havana. Mr. Myl has become the go to contact for foreign artists who fly to Havana to experience the energy of an emerging streetart scene. He has painted with a long list of the Who’s Who of the scene, from Ola Kalnins (Sweden) to 1up (Germany), Seth (France), Entes (Peru) Abstrk (USA) and many, many more. The foreign artists would bring materials and share techniques with the Cubans. Mr. Myl is also quick to counter that the visiting artists also learned something very important from the Cubans. They learned to paint in daylight. Hiding in plain sight was a new concept for them, but as Mr. Myl stated on French television earlier this month, “If you paint in daylight everyone just assumes that it was approved.”

Hiding in plain sight was a new concept for them, but as Mr. Myl stated on French television earlier this month, “If you paint in daylight everyone just assumes that it was approved.” 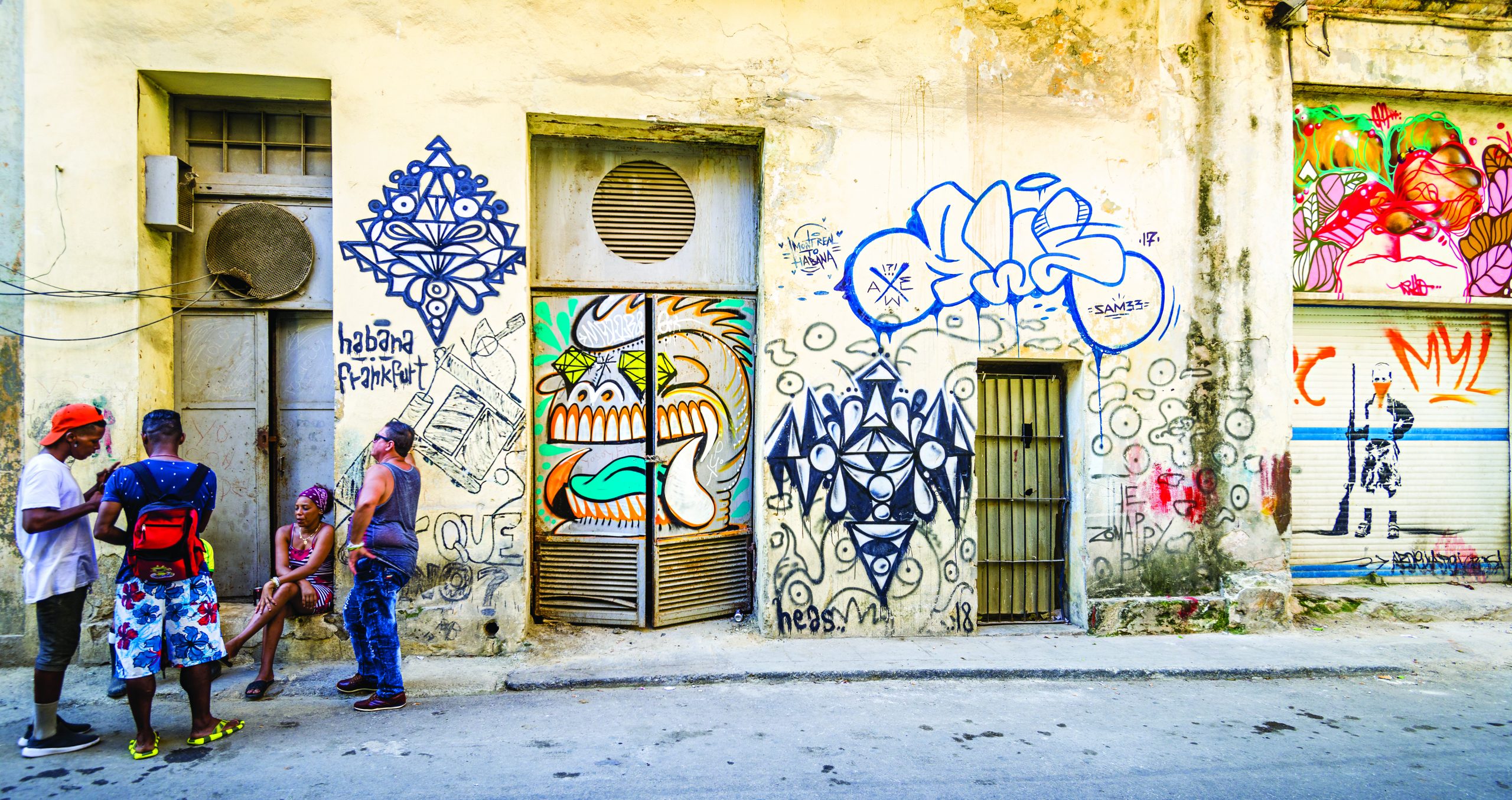 Mr. Myl is a graduate of the San Alejandro Academy and the Higher Institute of Art where he studied Fine Art. His conversations are often peppered with references to styles and movements from the context of art history. In 2006 he saw an intervention by a group of graffiti artists and it helped trigger an expansion of his ideas towards his work. “Taking art to a collective space and actively intervening in it was the first reason why I was interested in drawing public walls. But over time I stopped importing ‘art,’ that abstract concept, and I started thinking about the street.”

Mr. Myl’s work is abundant throughout Havana. If you search for a connective theme you may not immediately recognize one. Myl paints in many styles. One day it could be throwing up letters, another painting with stencils, brushes, or spray.  “I paint for myself, for my desire to create. One day I stopped worrying about searching for concepts, messages, justifications and I just let myself paint what I wanted: letters, characters, whatever.”

One identifiable character in his stable, and one most repeated throughout the city is Canibal, an interpretation of a skull with diamond eyes that takes many forms as guardian of the streets. “It means what each person wants to understand. No decoding is wrong. For some it is ‘Eleggua’ that opens roads, for others a skull. I have heard many interpretations. I just thought it was great that there was a guy with that smiling attitude on all the streets of Havana.”

Mr. Myl has always considered it an honour to create portraits of heroes. Whether Omara Portuondo from the Buena Vista Social Club on the Malecon (likely the piece most seen by both locals and tourists due to its central location on the Havana seafront, the image was subsequently used by the artist as an album cover) or Papi, a resident of one of old Havana’s most neglected neighborhoods who has endeared himself to generations of neighbours for his welcoming and supportive personality. The portraits are presented with an energy and respect that touches the heart of all that see them. 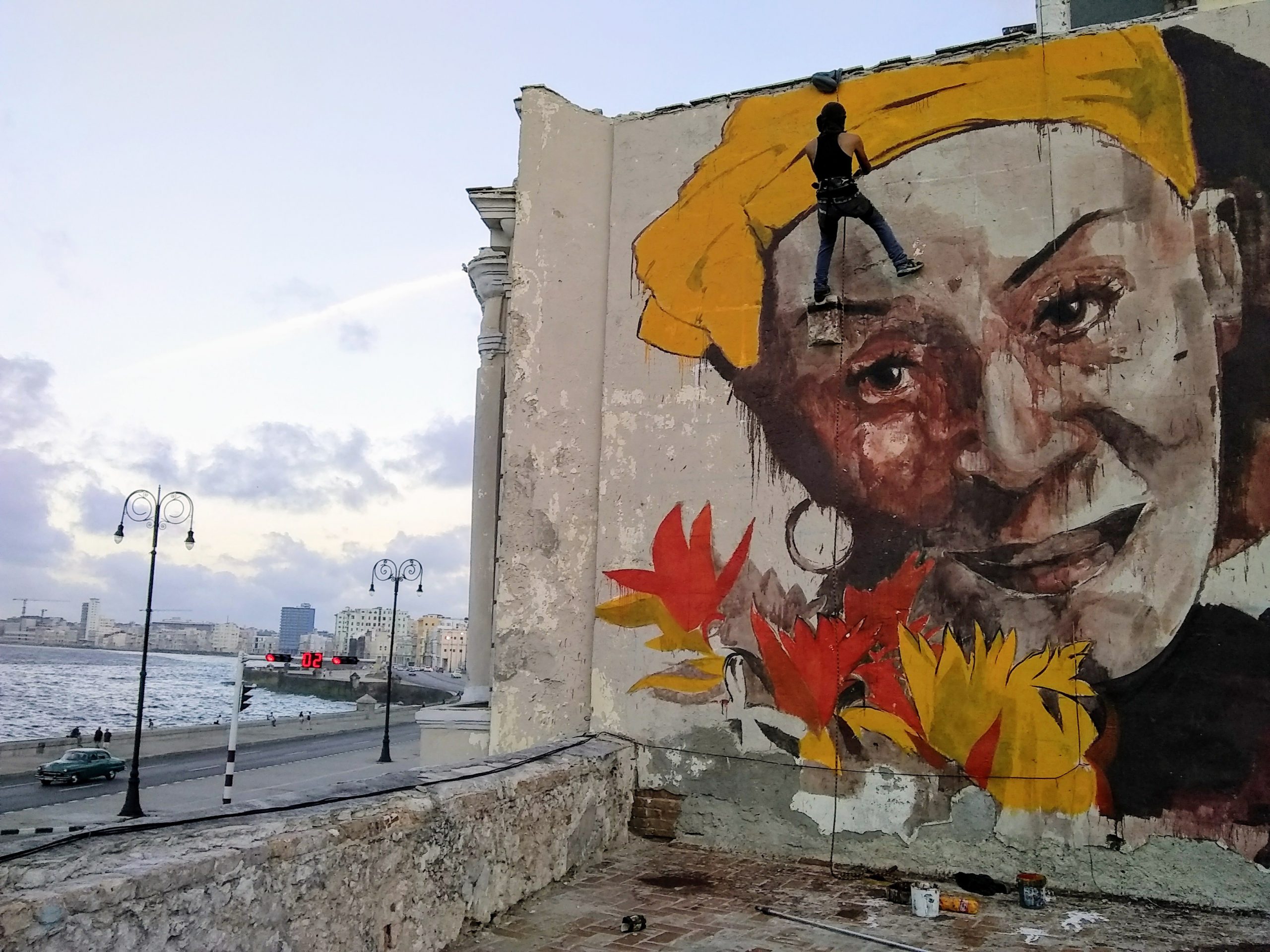 “I paint for myself, for my desire to create. One day I stopped worrying about searching for concepts, messages, justifications and I just let myself paint what I wanted: letters, characters, whatever.” 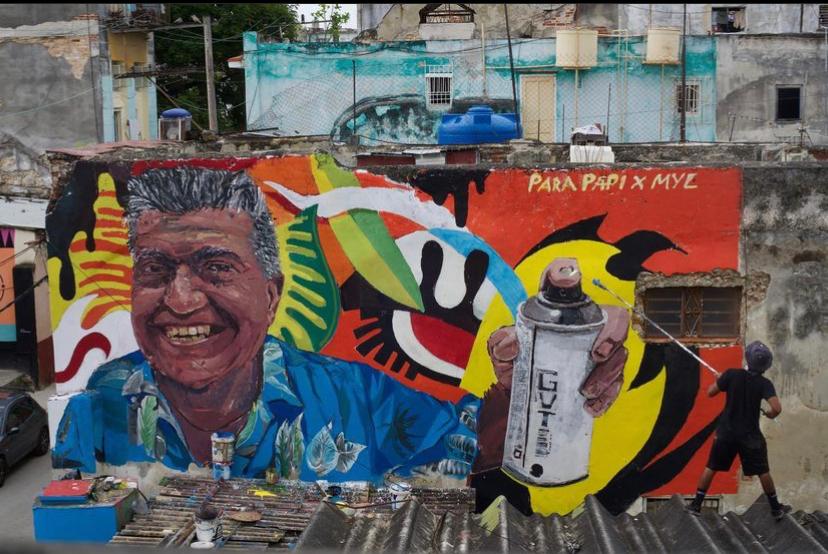 Mr. Myl is one of the pioneers of a growing movement of graffiti artists; founder of the San Isidro Art District (Old Havana). Myl has been invited to intervene and exhibit his work at La Fábrica de Arte, Havana Cuba, the Poliniza Valencia Urban Art Festival, Spain, Miami Light Box Project, Florida USA, and the Pictopia Festival in Medellin, Colombia, Bordeaux Parallaxes in France among others. 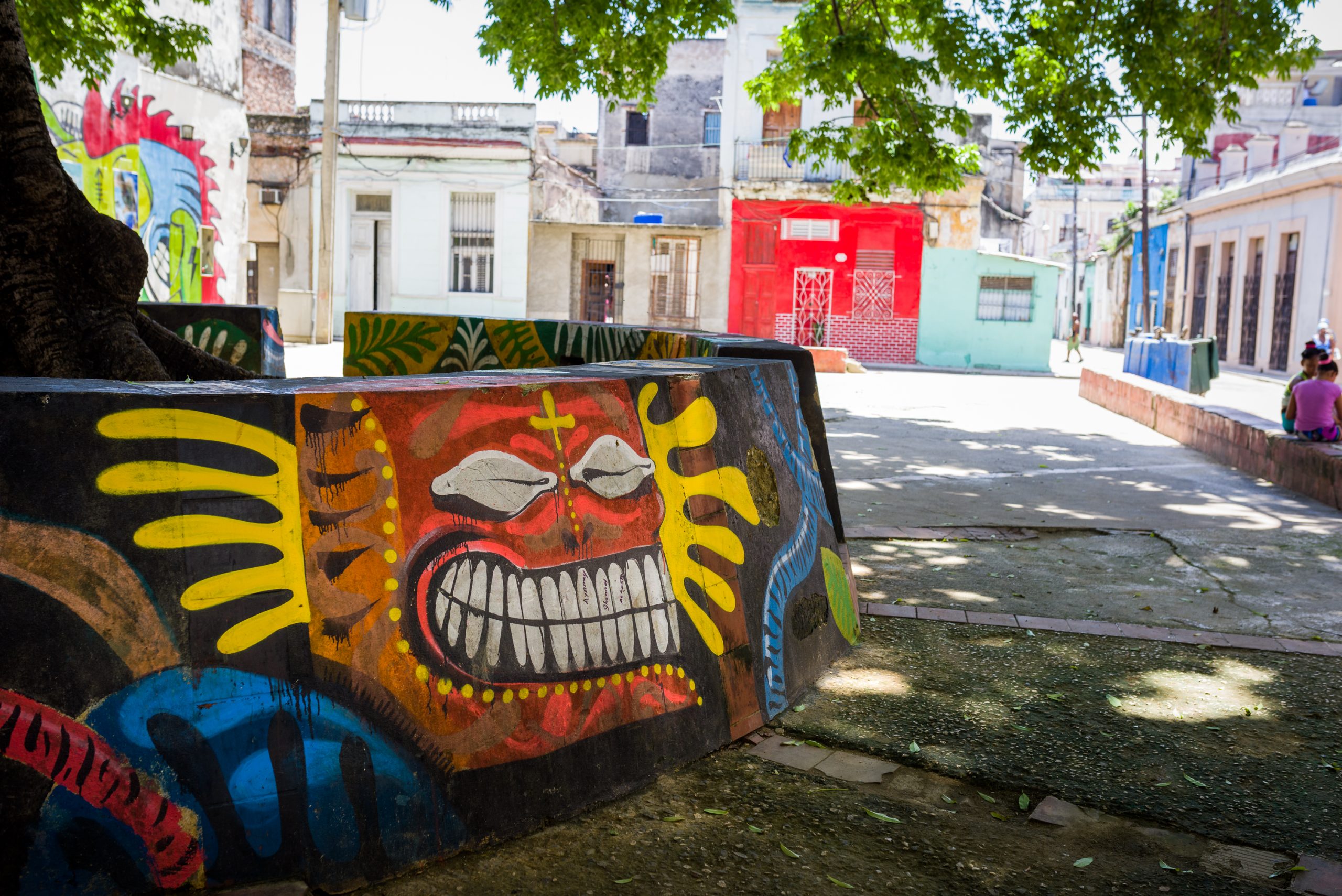 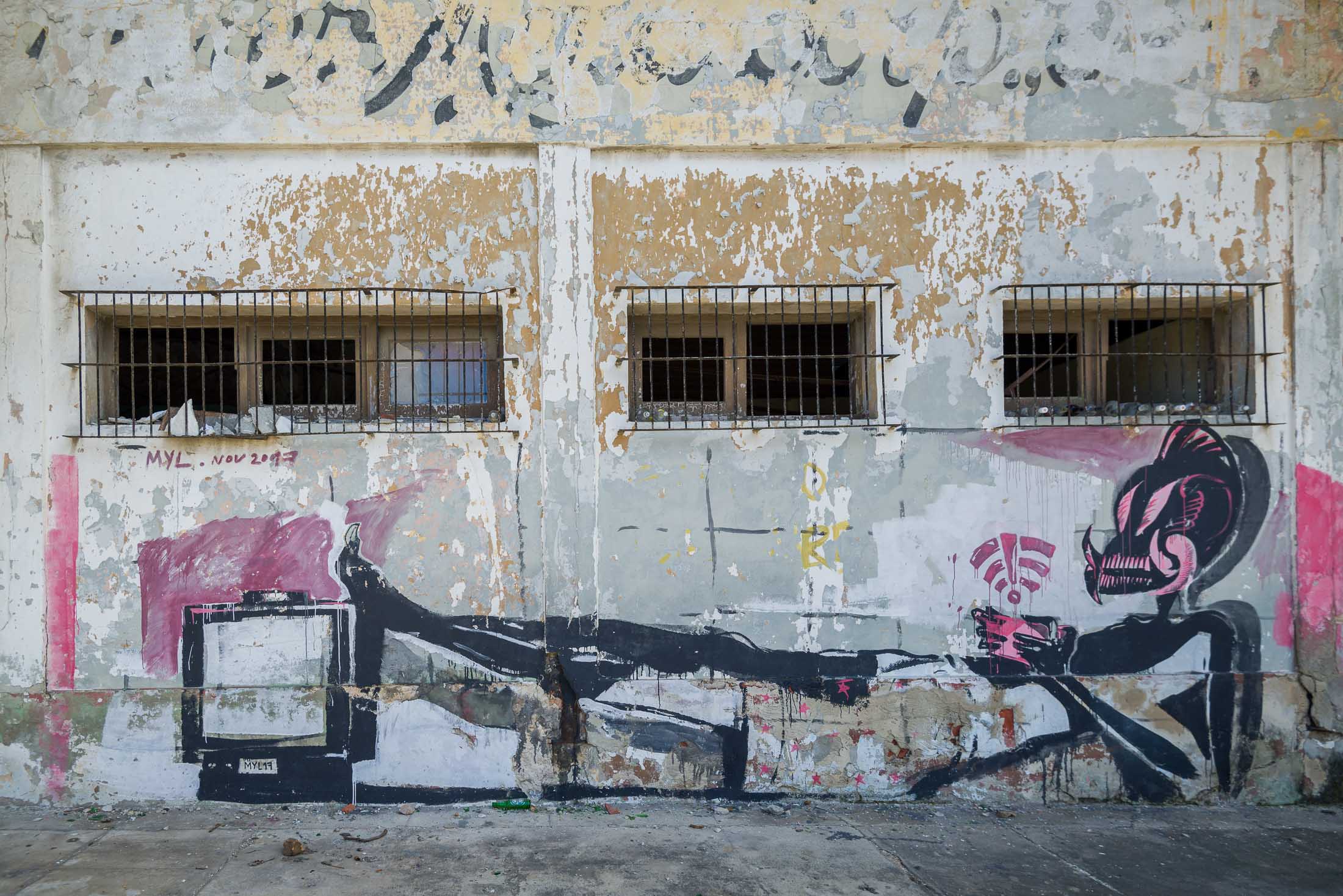 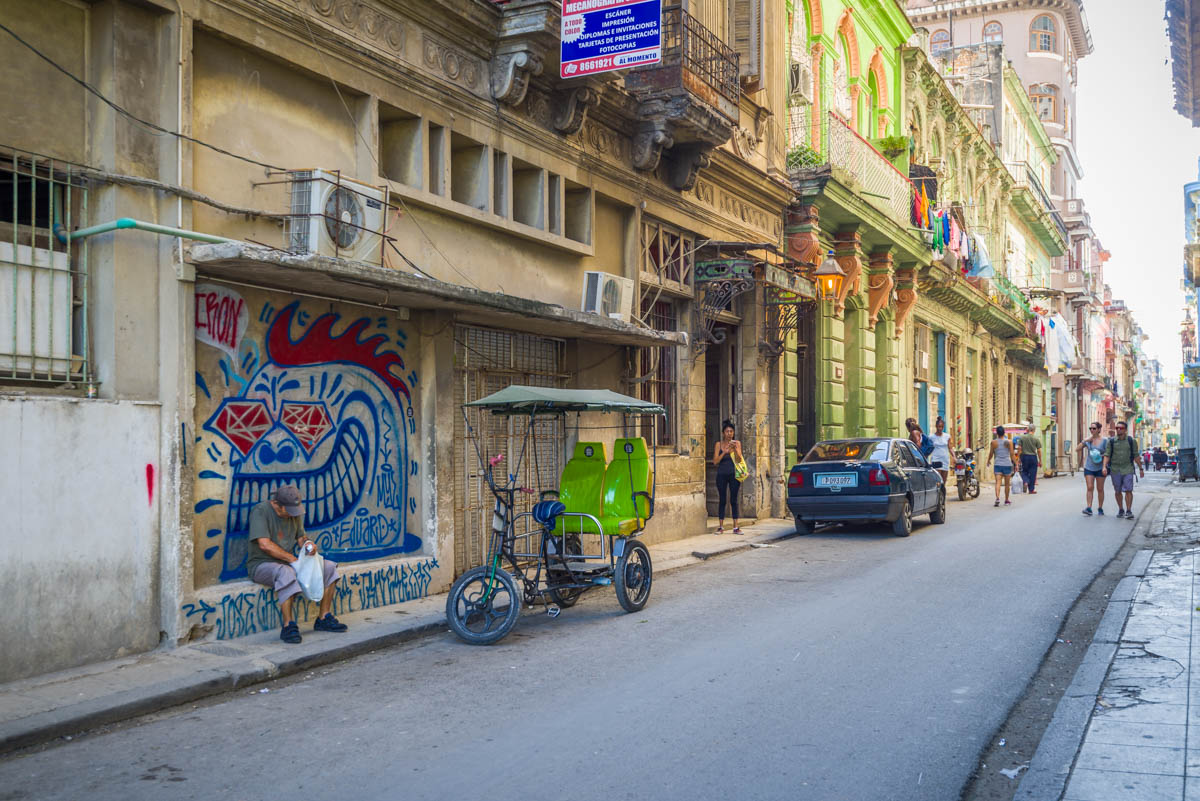 The one thing Myl never forgets is that his presence in the city must continue to be a positive one and his responsibility to set examples for those younger than him. He is frequently involved with the organization of clinics for children in neighborhoods that receive less attention. These events include food, music, art lessons, and encouragement for children who sometimes need something special to bring a smile to their faces. Myl is a devoted family man. Most of our conversations focus on his wife and daughter. In a culture where it is too common for relationships to be seen as temporary, Myl publicly announces his love and gratitude to his wife (also a painter) with portraits of her pregnant with their daughter spotted at various locations around the city. 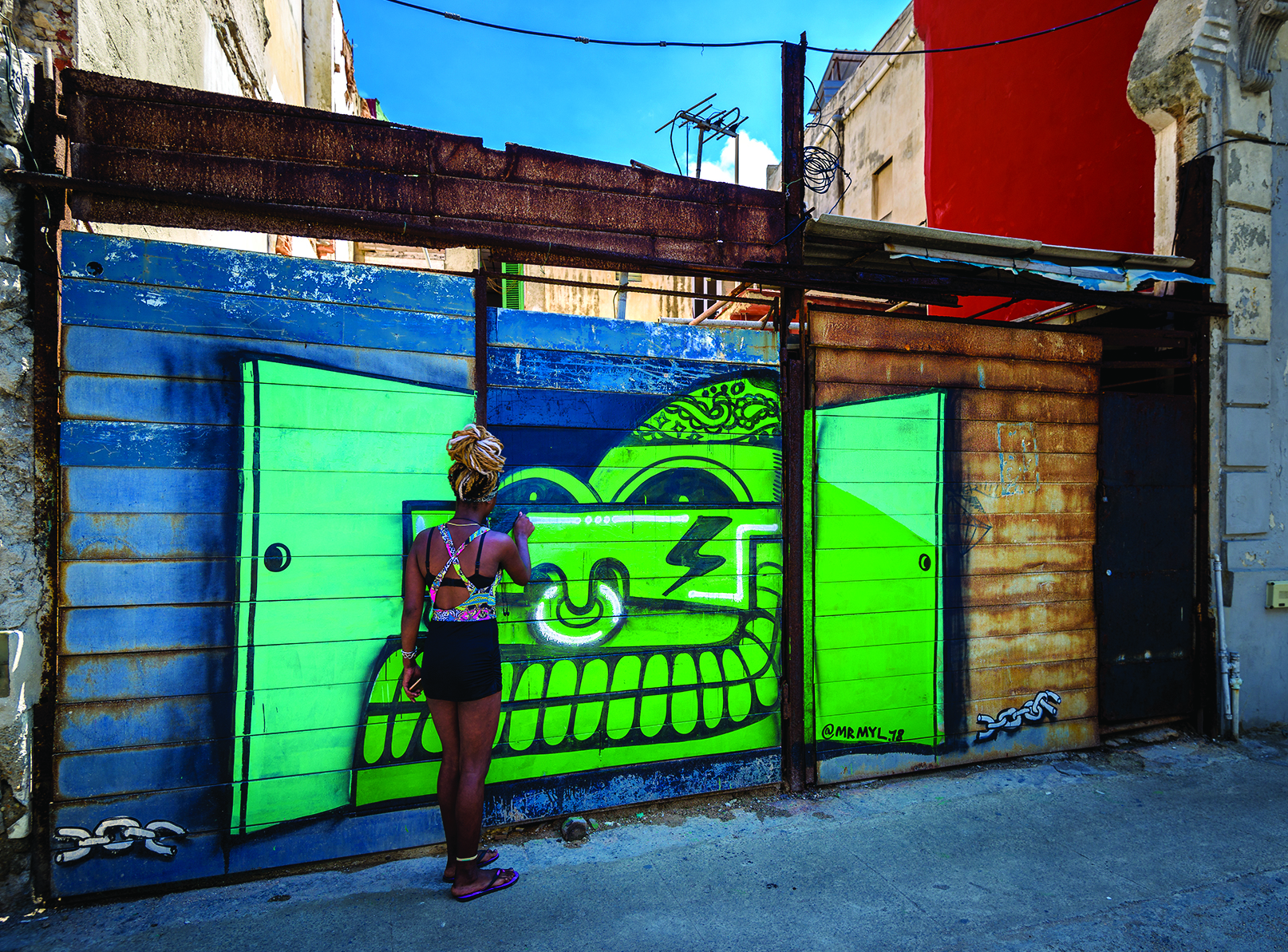 From the darkness of shortages, Covid and a ruined economy to the brightness of a city with an explosion of art. When asked why he paints he responded, “Because I like it. The graffiti artists draw on the streets because we are a little crazy and we need to paint. I have no other answer.”

No matter where we live, street art has become part of our urban architecture. We may see a new piece that either pleases us or not, but very rarely are we surprised by the sight of a mural or graffiti as we turn the corner. Havana is a city of dramatic contrasts. From the darkness of shortages, Covid and a ruined economy to the brightness of a city with an explosion of art. When asked why he paints he responded, “Because I like it. The graffiti artists draw on the streets because we are a little crazy and we need to paint. I have no other answer.”

Amir Saarony’s body and mind live in Toronto, Canada but his heart lives in Havana, Cuba. Amir first went to Havana in the late 90s, during the final years of the Special Period for what was supposed to be a 3 week work assignment that ended up lasting into the 21st century. In Toronto Amir has been a graphic designer/art director for over 30 years. After over 100 trips to Havana Amir has participated in many projects. From consulting with businesses, working with social causes and humanitarian aid to writing books and articles. In 2019 Amir published Painted Walls Havana, a 386 page coffee table book on the emerging street art scene in Havana. Falling back on his fine art and art history education Amir is now on a mission to show the world the other side of Havana. The one you do not see in the tourism ads. His next dream is to create a documentary on the urban scene in Havana.