How to Turn Your Favorite Mural into a Tattoo

It’s not uncommon for something public to become personal. A ballpark, a rope swing, a library book you never return. The woods behind the McDonalds where you first got high.

What about a mural you pass every day?

A wall, a graffiti-soaked alleyway, these are the biggest and freest galleries in the world. At its most basic, sure, dropping some paint on a wall is just public art. But those works that started in someone’s head become a real thing in the world, a real thing that causes ripples of inspiration and becomes something else entirely. A mural becomes a conversation piece, an Instagram post, someone’s tattoo, the subject of an article; they are ideas made physical that cascade into new art.

At 3609 13th Street NW in Washington, DC there is a mural on a white wall of two kids communicating with a tin-can telephone. The boy at the front is hugging his knee and listening, looking a little confused. The girl on the other end of the string looks desperate, shouting something neither us nor the boy can hear. The mural was painted in 2014 as part of a project by MuralsDC, a DC Department of Public Works initiative aiming to replace ‘illegal graffiti’ with artistic works and to teach aspiring artists the craft of aerosol painting through legal means that promote community awareness. In tandem with the murals were DJ-ing workshops and breakdancing classes – one of those city programs that engages the youth through hip-hop elements. 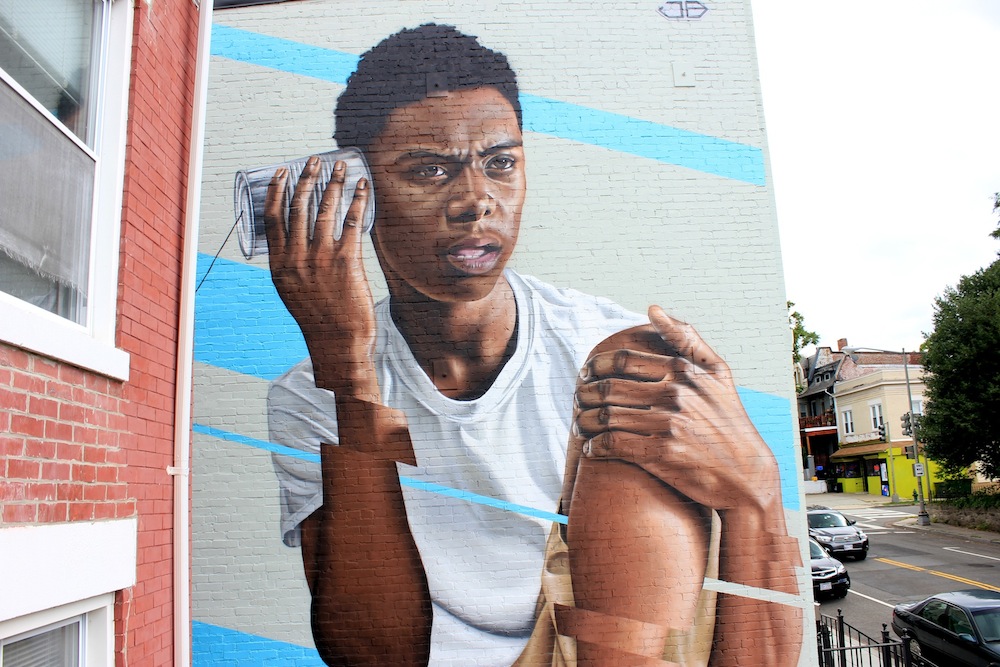 My friend Ezra McCants saw the mural many times and says he, “really fucked with it.” So much so that he wanted to get it tattooed. We spoke on the phone as he cooked lunch.

“Through going down from New York to DC on the Megabus all these times, I kept seeing that mural as I got down to 13th Street and every time I thought, ‘That shit is dope as fuck.’ Then I’m trying to conceptualize new tattoo ideas, because I have the bug from my fist one, [the mural] was my second vision. It took me a long ass time to commit because I didn’t have an artist that I wanted to do it etc. so really it took me 4-5 years before I actually pulled the trigger on it. I finally did during quarantine.”

To Ezra, the original mural was dope, but he didn’t want a direct wall to skin translation. The energy, with the screaming, was a bit aggressive for a tattoo. His vision was more of a “teenage love vibe.” He wanted the second subject to be a black woman, but in whatever style the tattoo artist wanted to take it.

The teenage nostalgia was Ezra’s interpretation of the mural. I asked if he ever looked into the wall’s original intention, what the artist was trying to do with it. He hadn’t and, truthfully, felt a little bogus making his own edits.

“I’d be curious to know how the original artist would feel about that. I definitely changed the tone. But I would hope that he would be flattered that I connected to the image so much.”

And here is one of life’s fun coincidences: I know the artist. James Bullough, American artist living in Berlin, featured at Wynwood Walls, Lollapalooza, London’s Stolenspace Gallery, the Long Beach Museum of Art, Thinkspace Gallery, dozens of German exhibitions, and host of the VantagePoint Radio podcast. My girlfriend’s cousin. 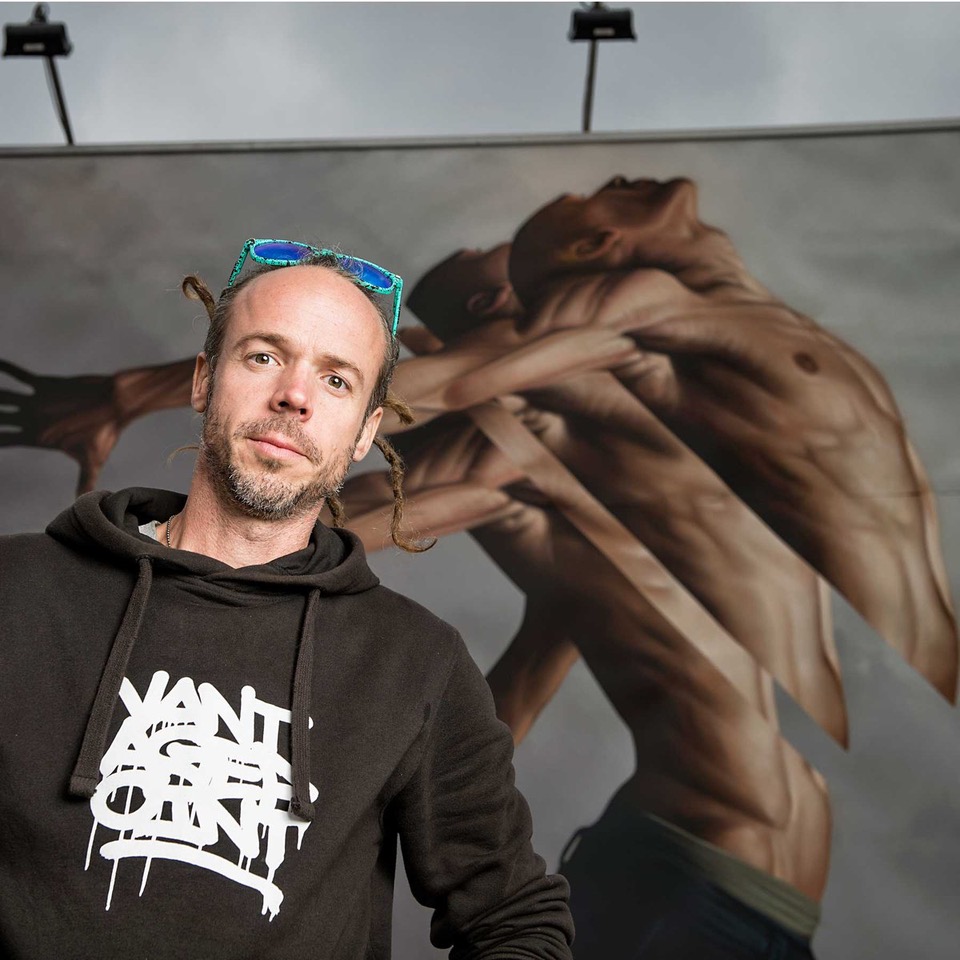 Artist James Bullough standing in front of his mural ‘Burst’ from the Lollapalooza Festival in Berlin, Germany, 2015 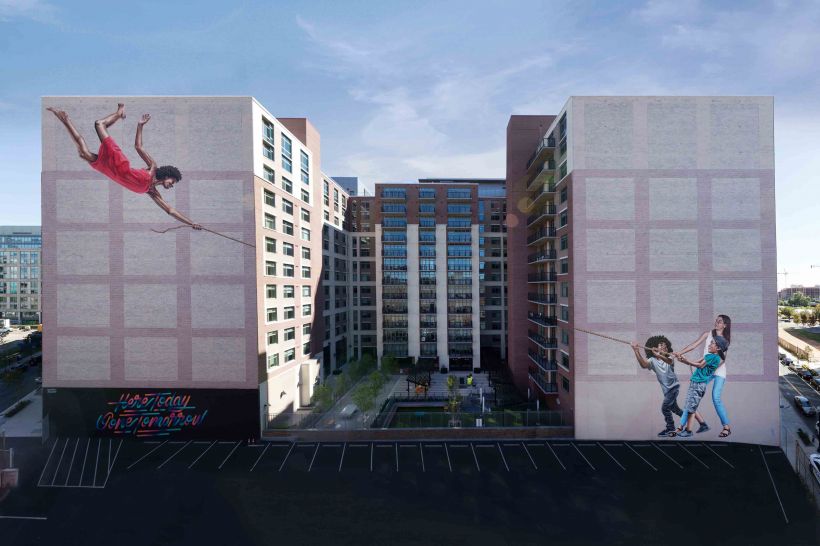 Caption: Another Washington, DC mural by James Bullough, this one located on the west face of the AVA NOMA condo complex.

“It’s flattering,” says Bullough. “I mean, obviously it’s flattering when someone gets your art permanently tattooed on their skin. It’s this public art thing: I’ve always felt like when I create a mural, I come to a space and the artwork is mine. I came up with the idea, I put in all the work to get to the point where anyone would even allow me to paint on a wall like that, blah, blah, blah. I’ve done all that. And then I come, and I put a ton of work into it and sweat for hours and I put it up there and then the moment I finish, I sign my name and I walk off, it’s not mine anymore.”

As part of that MuralsDC initiative, which was curated by Words Beats & Life, Bullough volunteered a mural and did a workshop presentation talking about what he does, what it’s like being a professional artist, how he made it from tagging walls to galleries and commissioned commercial projects, all of that.

“I actually photographed some of the kids in that group for the mural. So the two kids that I painted were two kids from that program that I had met that day. I mean, I was supposed to start painting like the next day and I had no image to paint.” 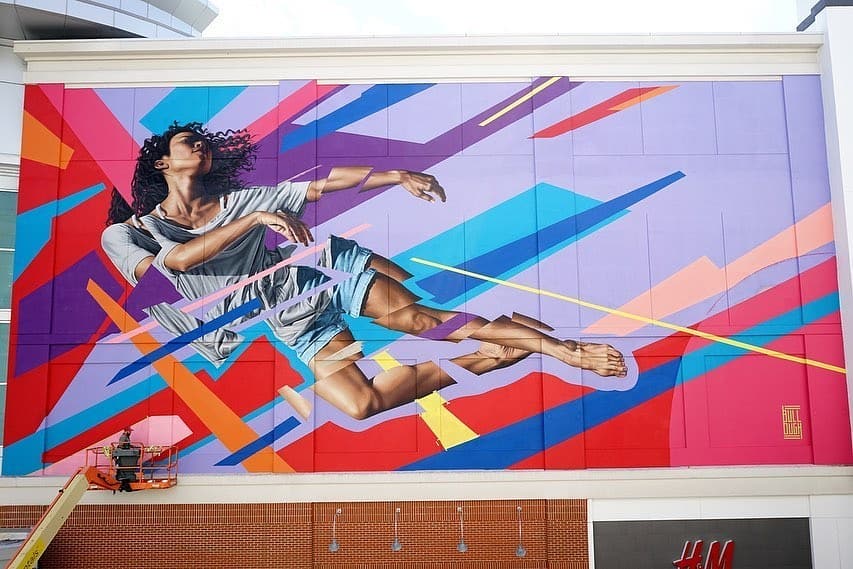 Caption: This impromptu choice would turn out to be the catalyst for the mural’s first artistic descendant. A couple years ago James was working on a mural in Silver Spring, Maryland. He was with his assistant in a man basket right downtown so there was always a group gathered watching them paint. One day, there was this kid who stuck around for a long time, asking a bunch of questions. He had a book he wanted James to sign.“

My assistant was like, ‘Hey, you seem to know a lot about James. What’s the deal? You follow him or something?’ He was like, ‘Yeah, I know him. He painted me on a wall in DC.’ And I was like, what?? The second he said that I realized he was the kid with the tin can. The book he wanted me to sign was his book full of paintings and sketches that he wanted to show me and get my opinion on. He hit me up a couple of weeks later through Instagram and I kind of gave him a little critique on his work. He was wearing a bow tie and like pinstripe pants. He had a whole style going on.”

“You ask how does it feel to have one of my murals tattooed? It feels awesome, but it almost feels like he got a tattoo of this idea that resonated with him. I don’t know how much of that has to do with me, if that makes sense.”

As for the tin can mural and its ‘meaning,’ well, it’s fluid, taking the shape of the myriad minds that consume it.

“When I create work,” says Bullough, “I try to create work that is the beginning of a conversation rather than a statement or the end of a conversation. So this image that I painted with the two kids and the tin can, it could have so many meanings. It could have racial meanings, it could have historical meanings, it could be lots of things. But at the end of the day, I saw this wall and I knew I wanted to paint a person on it. And then there was like a long skinny alley and I wanted to paint something on that other wall and I was thinking I had to connect them some way. I thought, if a kid’s talking on a phone, people are going to be like, well, what’s on the other end of that phone? And they might walk down the alley to look.

“You ask how does it feel to have one of my murals tattooed? It feels awesome, but it almost feels like he got a tattoo of this idea that resonated with him. I don’t know how much of that has to do with me, if that makes sense. If he had gotten a tattoo of one of my canvas paintings, then I would feel much more ownership over the tattoo in a way. But this is an experience that he had passing that wall. When people ask me, ‘What’s that a mural of?’ I normally say, ‘It’s whatever you think.’ You’re the one that activates it. This kid activated it in that way, which I think is cool. He took ownership once he did that.”

The same exact tiger tattoo on two different people could have radically different meanings. For one person, maybe it reminds them of their father. The other, maybe he just loves Calvin & Hobbes.

What Bullough is saying about public art could just as easily be said about tattoos. The same exact tiger tattoo on two different people could have radically different meanings. For one person, maybe it reminds them of their father. The other, maybe he just loves Calvin & Hobbes. Public art creates in every passerby an individual impression.

Generally, I’d say it’s bad form to ask someone why they got a tattoo. They’ll tell you if they want and any reason is good enough. In tracking the tin-can mural from wall to skin, I asked Ezra anyway. 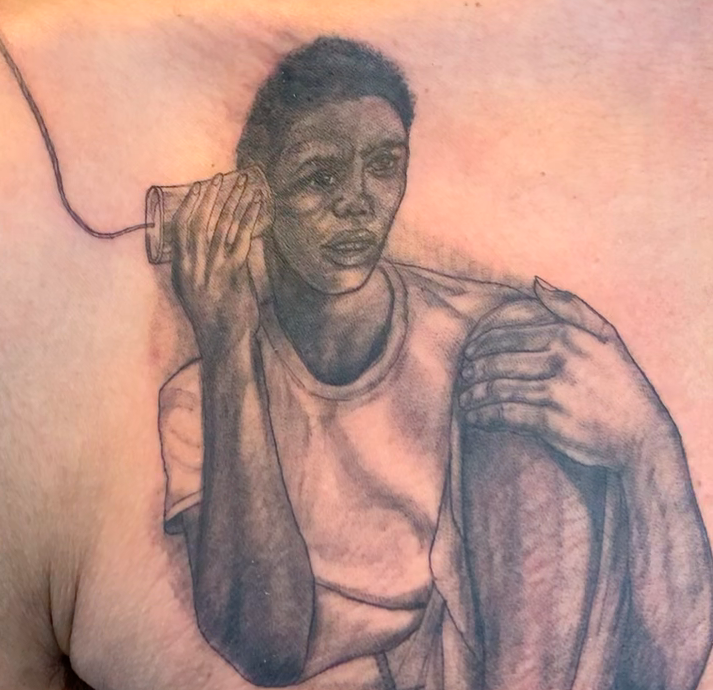 Caption: Tin Can Telephone translated to a tattoo for Ezra McCants.

“There’s something to say,” he says, “about repeatedly going by something and not really knowing 100% why you fuck with it more than the other dozen murals up the street. The connection of making that trip from New York to DC on the Megabus and being able to stamp that image as ‘I’m two minutes from home,’ that was a good enough connection for me.”

“There’s something to say,” he says, “about repeatedly going by something and not really knowing 100% why you fuck with it more than the other dozen murals up the street. The connection of making that trip from New York to DC on the Megabus and being able to stamp that image as ‘I’m two minutes from home,’ that was a good enough connection for me. My DC family, and DC being one of my launching pads, that’s one of the main connections. And it just being cool ass, striking images. All my tattoos are black people, so thematically it fit. I also like that it’s a two-for-one. It connects two pieces of the body that wouldn’t normally be connected in a tattoo through this can-phone that reminds us all of our youth. Nostalgic shit.

“It’s crazy he [Bullough] does art that moves people, like, I guarantee a bajillion people have shitty Mona Lisa tattoos so, he’s on his way to that type of inspiration on the world. We’re all taking art to its next medium.”

Griffin Suber is a Washington, DC native currently working out of Singapore. Maybe Thailand or Bali…it varies. A contributor to several publications, he’s into culture, buildings, and exploring diverse perspectives. When not interviewing artists or cuddling with his laptop, he enjoys diving, making beerpizza (one word), and anti-government rhapsodies.