Remembering Mahsa Jina Amini Around The World Through Murals for Freedom

Ashley Hodder’s murals have an unabashed, maximalist femininity that radiates off of the walls she paints on. It’s one of the things I love about her work. But in her portrait of Jina (Mahsa) Amini on a brick wall on Pittsburgh’s north side, Hodder’s art style lends itself to a revolutionary cause for women around the world. When the Iranian morality police killed Amini in the act of brutality that inspired the “Woman, Life, Freedom” movement among Iranians to protest the human rights abuses under Ayatollah Khomeini, it was for the crime of not covering her hair correctly. In Hodder’s mural, Amini’s hair flows in purple and red rivulets down the bricks. Near where the wall meets the grass, tendrils of Amini’s hair turn into a stream of blood. 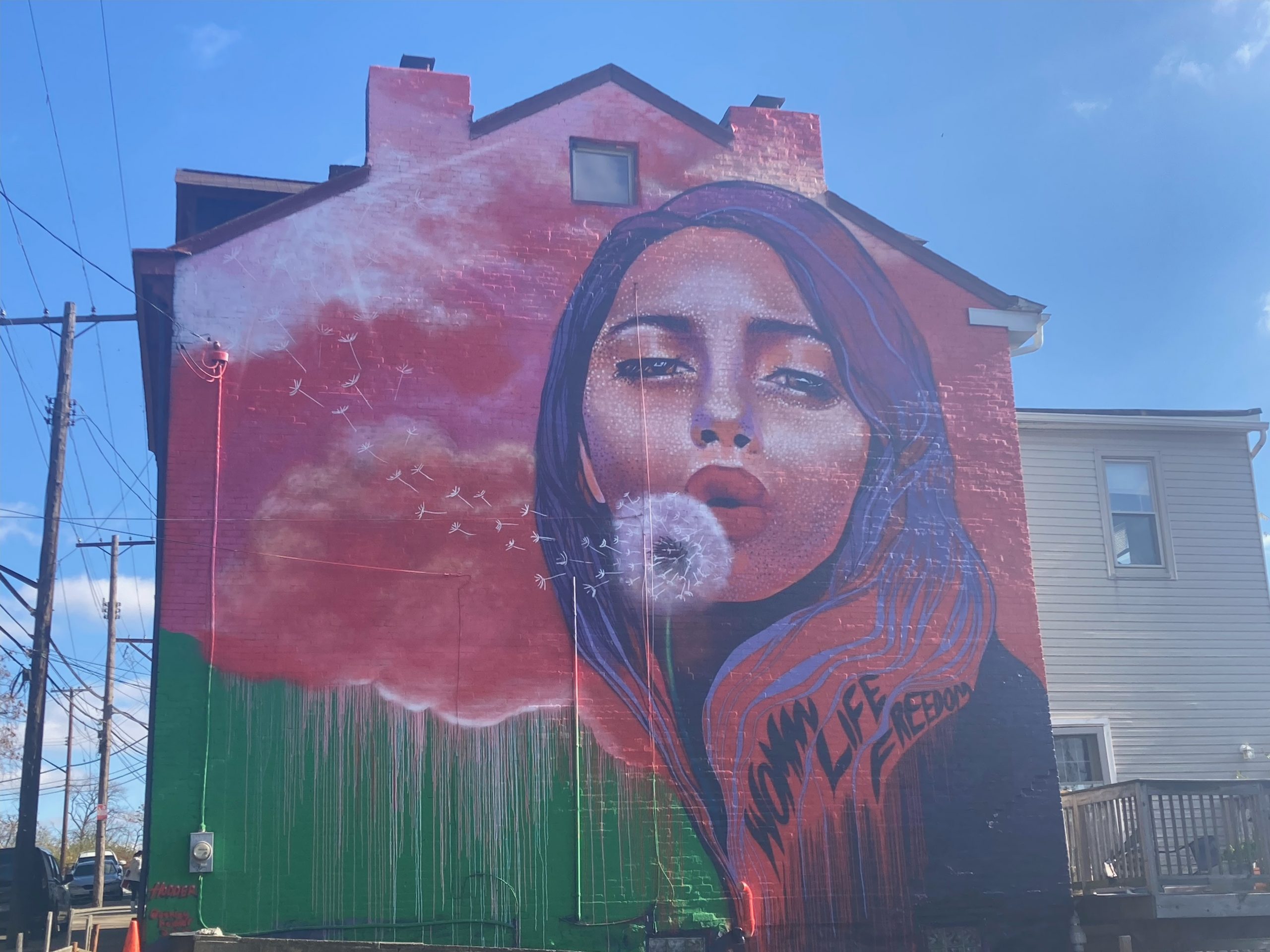 ““I was really emotionally affected by this photo of her. Just seeing this young woman making a wish with the dandelion seeds, and then the sad reality that the dandelion now is a symbol for the seeds of this movement.”

Hodder’s mural is part of Murals for Freedom, larger project organized by Cloe Hakakian to put Amini’s face, once obscured in the darkness of the Iranian morality police’s captivity, on walls around the country and the world. “The worlds largest FEMALE LED REVOLUTION is happening RIGHT NOW in IRAN,” Hakakian writes on Instagram. “Art has historically been an integral part of social revolutions. It can educate, inspire, unite, and most importantly AMPLIFY THE VOICES OF THE SILENCED.” The murals have so far reached Seattle, Los Angeles, San Francisco, Pittsburgh, New York, Kansas City, Toronto, Berlin, Amsterdam, Frankfurt, and London.

Hakakian points out an important role street art can play in social movements. Public art is one of the only truly free ways of disseminating information—no admission charge, no “customers only” sign on a window, nothing required of the viewer other than to be there. Hodder’s mural is visible from the below highway hundreds of Pittsburghers take to and from the city’s downtown.

In the mural, Amini blows the white seeds of a dandelion into the wind. “I was really emotionally affected by this photo of her,” Hodder said. “Just seeing this young woman making a wish with the dandelion seeds, and then the sad reality that the dandelion now is a symbol for the seeds of this movement.” The wall she painted on belongs to a local community member, who happily gave Hodder access to it upon conferring with her and Hakakian. Hakakian’s Murals for Freedom movement requires an unbelievable amount of collaboration among people of different cultures, backgrounds, and locations in order to spread its message across the world.

November 19th was the Global Action Day for the Woman, Life, Freedom movement, and though Pittsburgh’s Iranian community is small, it has a mighty voice. This particular rally, organized by Fayezeh Hassan, came in the wake of the regime’s horrific murder of children Kian Parfalek and Sepehr Mahsoudi. Hassan highlighted the importance of having a space to talk about the atrocities with other Iranians who understand. But she also made sure to focus on taking action and using your voice by any means necessary. “It’s very important that as women, we are heard,” she said. “We need to have a vision for what Iran should be like after this revolution.” 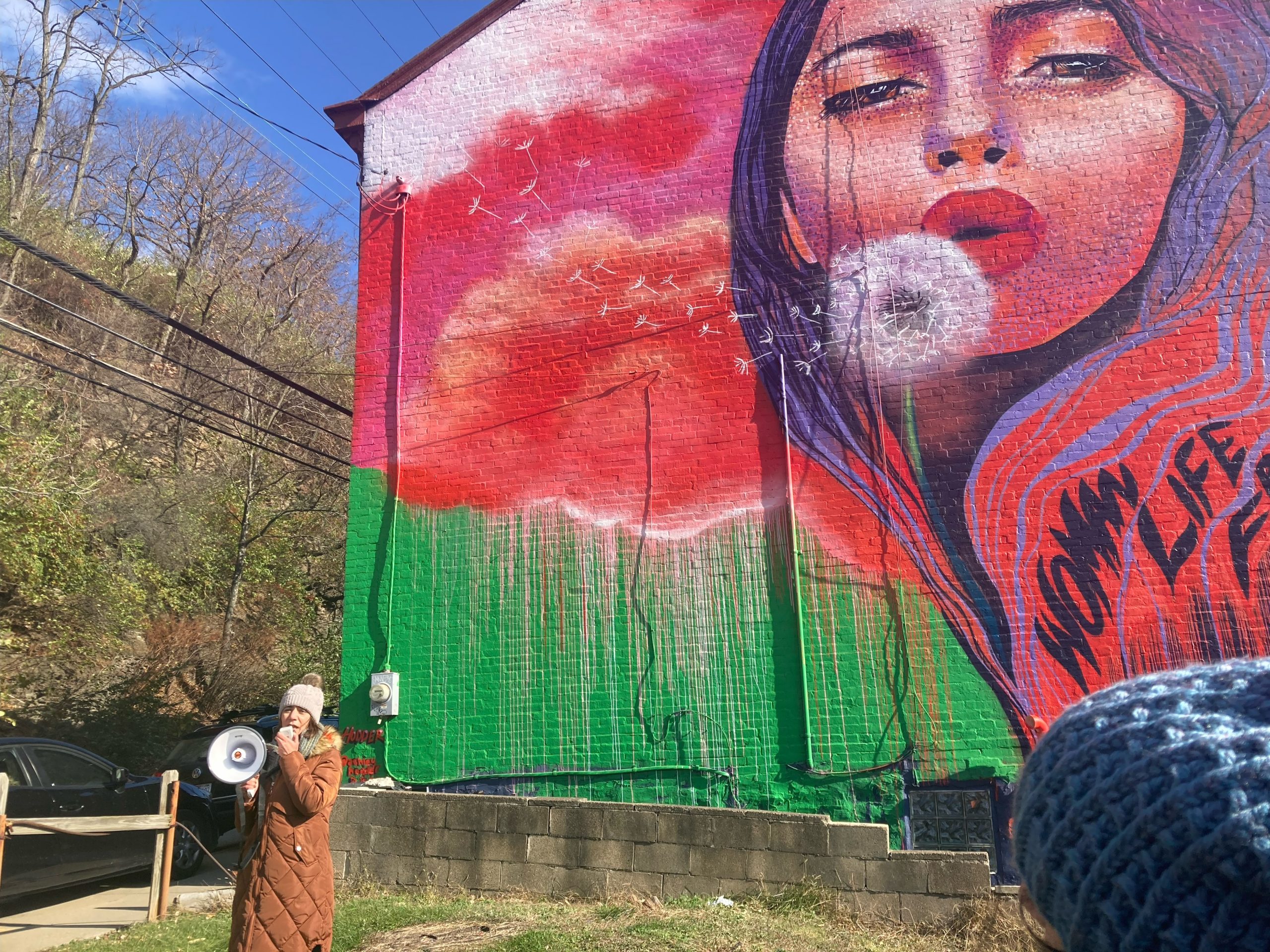 “It’s very important that as women, we are heard. We need to have a vision for what Iran should be like after this revolution.”

The efficacy of protest is always up for debate, but in the case of the Woman, Life, Freedom movement, visibility is one of the most effective ways to further it. “Art is a universal language,” Hakakian wrote in her description of Murals for Freedom. Around the world, artists are using that universal language to lend their support to Iranians.

In Berlin, Despierte Collective wrote in their statement, translated from Spanish: “We say NO to the violent crimes and war against the life of girls, women, and sexual minorities. Today, they are the ones who cut off their hair to continue speaking the unspeakable.” 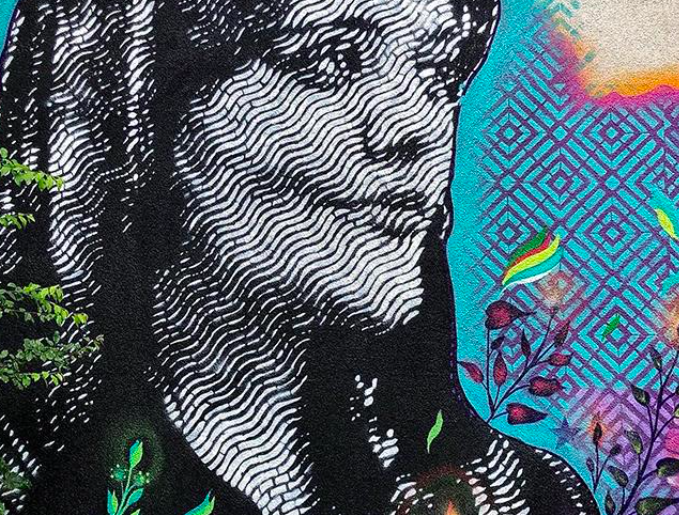 “We say NO to the violent crimes and war against the life of girls, women, and sexual minorities. Today, they are the ones who cut off their hair to continue speaking the unspeakable.”

In Toronto, Ghazaleh Rastgar painted a woman with free-flowing hair inspired by the Achaenid murals in Persepolis, a reminder of the pre-Islamic cultures of Iran. Rastgar wrote: “My family, like many others were persecuted and directly effected by the Iranian regime’s unjust cruelty so when the latest movement started, I passionately wanted to contribute to the cause and raise awareness.” 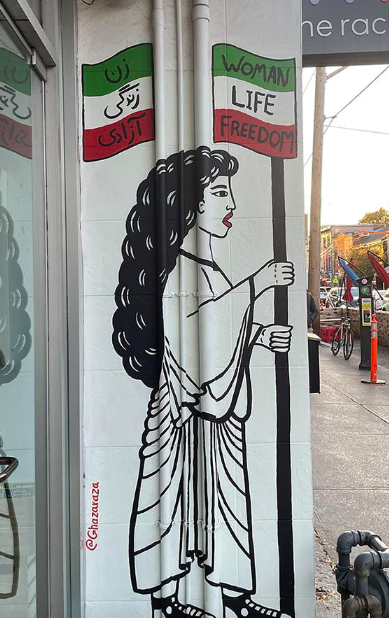 “My family, like many others were persecuted and directly effected by the Iranian regime’s unjust cruelty so when the latest movement started, I passionately wanted to contribute to the cause and raise awareness.”

And in San Diego, Thao Huynh French and Chloe Becky depicted Nika Shakarami, another feminist activist murdered by the Iranian regime. “When she took off her hijab and lit it on fire, blood spilled from her body at the hands of the Islamic Regime. The flowers growing from her body is an offering of a proper funeral she never had,” French wrote of the piece. 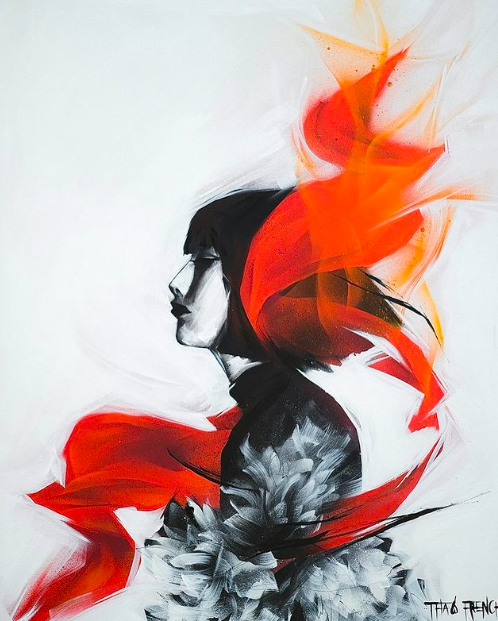 “When she took off her hijab and lit it on fire, blood spilled from her body at the hands of the Islamic Regime. The flowers growing from her body is an offering of a proper funeral she never had.”

Amini’s innocuous social media photos like the one Hodder based her mural in Pittsburgh on remind us that Amini was a regular twenty-two-year-old girl who took selfies and wore makeup. And there is something to be said for the delicately rendered beauty of Amini’s face in the murals. Though in a past life as a student journalist I raged against beauty culture’s effect on women and didn’t wear makeup for almost two years, beauty can also be a form of dignity. Women make eyeliner out of coffee grounds in prison, when all of their dignity and humanity has been completely stripped away. In murals around the world, Amini is painted with dignity and valor she did not receive in the last moments of her life.

In the art world, many are prone to talking about social action with the language of a postmodern literary theory class—deconstruct this, subvert that, and argue about systemic inequalities until the cows come home. There is of course a complex net of socio-political forces at play in understand modern Iran, including the movement for Kurdish independence, the sanctions on the country, and the United States’ convoluted role in the region.

But what is happening to children like Kian Parfalek and young women like Nika Shakarami and Jina Amini is not theoretical. From forming a relationship with cartoonist Nasrin Sheykhi and participating in this local rally, I see clearly that this movement demands women of all creeds should stand with Iranian women. And part of what has led to its traction in Iran is that men stand beside their female community members.

At the rally, a local Iranian American engineer spoke about the anguish he felt that those outside of Iran who have the means to contribute financial aid or social action stay complacent. The reality is that most of us are capable of contributing more than we think we can, even if it is only our voice or a couple of dollars. Street art is the perfect way to combat this complacency and remind everyone who passes by that conflict on the other side of the world is not as far away as it seems.

Murals for Freedom is raising funds for the creation of further works of art on GoFundMe. For those with tech and software skills, a GitHub community is currently working to make sure that Iranians are able to access the internet, with guidelines on how to contribute here. Reporters Without Borders has also sponsored an Iran Media Help Desk seeking funding for those on the ground in the Iranian media, particularly the brave female reporters such as Nilafar Hamedi who was arrested by the regime for photographing Mahsa Amini’s family.