“If you want to take away a country’s power, you shoot the women first,” Iranian cartoonist Nasrin Sheykhi bluntly told me over the phone. I spoke to Sheykhi in the wake of the violent murder of Jina (Better known as Mahsa as she was not allowed to go by her Kurdish name, Jina or Zhina) Amini, a twenty-two-year-old Kurdish woman who the Iranian “morality police” apprehended for the supposed crime of wearing her hijab incorrectly.

Sheykhi left Iran for the United States several years prior on the “alien of extraordinary ability” OB-1 visa, and she’s skewered politicians and historical figures from all over the world in her caricatures. But Amini’s murder triggered something different for her. “People tell me I should be careful what I draw, but if I were in Iran right now, I’d be protesting in the street and the police could kill me. So, is the risk really any worse?” She wondered. “These artworks are my streets to protest on.” 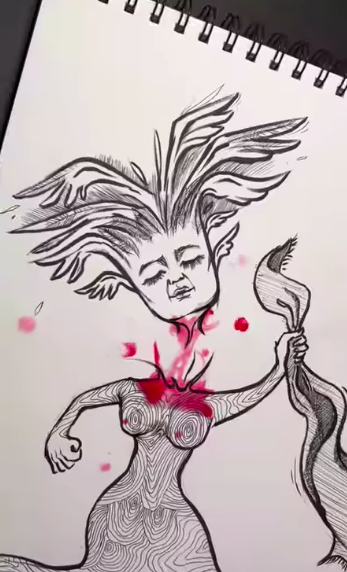 “These artworks are my streets to protest on.”

Sheykhi’s first piece responding to Amini’s murder appears in an Instagram reel posted in mid-September. Amini’s hair sprouts wings. Sheykhi shakes her paintbrush to create blood spatters over her lines as countercultural Iranian rapper Shahin Najafi’s “Akharin Zamen” crescendos in the background. It’s a case where the use of the Instagram reel adds something palpable to the experience of the piece; Sheykhi shakes the brush again and again, until the red paint obscures Amini’s chin and shoulders.

Through the video medium, you to see Sheykhi’s anger in the way she pricks the paper with tiny dots of blood and makes futile brushstrokes that run down Amini’s torso. By the time the reel ends, Sheykhi dumps a wash of red paint onto the drawing of Amini and then hurls her palette onto the canvas. Shahin Najafi’s vocals in the background sing they plant daggers in our city, you are short and you’ve made your people as short as you are.

“Her body is stuck on the land, but her scarf is gone and her hair is like wings,” Sheykhi explained of that piece. Amini’s hair starts as feathers from her placid face and then develops into small wings, as if it could lift her away from earth. In Sheykhi’s next piece in response to Amini’s murder, hair becomes a tool for vengeance rather than escape. The long, black tendrils end in the faces of screaming women kicking down police shields.

“This is our goal, to remove this corrupt, terrorist government with the power of our hair as women,” Sheykhi said. “Your hair has power. These guys are nothing. I was scared a little bit before drawing, but then I thought ‘As a cartoonist, what do I exist for? This is my job.’” Though the faces of the protesting women are full of righteous anger, Sheykhi portrayed Amini as smiling. “I wanted to give her a victory smile,” she said.

That victory has been a long time coming. Cartooning is considered a largely masculine art in Iran, and Sheykhi was drawn towards making political cartoons since she was a preteen. She had to stifle her voice after an uprising that led the government to murder 1500 people and seek out female cartoonists to put in jail. “But I just cannot shut up!” She exclaimed. And it’s a good thing she doesn’t. “Of course women are taking their scarves off in the street. This oppression, it’s like coal that turns us Iranian women into diamonds. The government was trying to break us down, but it turned us into brave, smart fighters.” 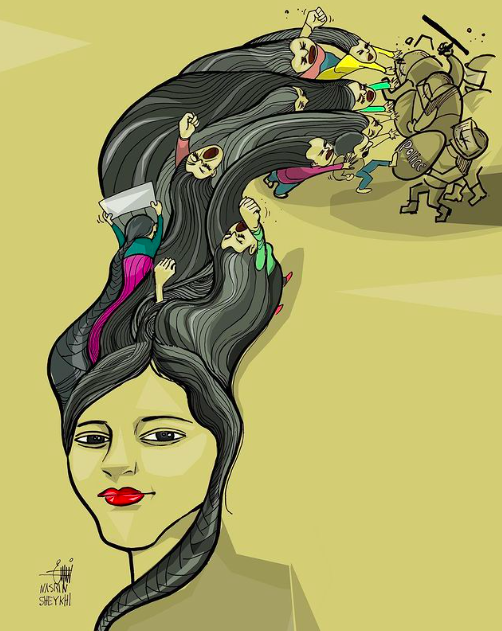 “You cannot take freedom from someone who has experienced it before. It’s like when you take a fish out of the ocean and put it in a jar. I’ve seen the ocean. You can’t put me in a little jar.”

Sheykhi implores people not to forget that just forty-four years ago, Iran wasn’t under Islamic regime. She is inspired but the Persian Empire’s more than 5000 rich cultural history and its previous more westernized society. “You cannot take freedom from someone who has experienced it before. It’s like when you take a fish out of the ocean and put it in a jar. I’ve seen the ocean. You can’t put me in a little jar.”

For a reel showing her process on her second piece, she accompanied the painting with Fereydoun Farrokhzad’s “Shargi e Ghamgin.” Islamic fighters murdered Farrokhzad and his sister after he defected to Germany. O sad Easterner, you are like a mountain of light, don’t let the sun fade away, you’re as pure as the morning and as proud as the sea, Fereydoun sings as Sheykhi zooms in on Amini’s triumphant, knowing eyes.

Sheykhi created several other versions of that depiction of Amini, including one strangling the Iranian president with Amini’s hair and another in which Iranian soccer player Ali Karimi kicks the president from Amini’s hair. Though the frustration in her pieces is catharsis, it comes from a lifetime of being asked to live by arbitrary rules. “I connect to Samuel Beckett’s Waiting for Godot,” Sheykhi said. “In a religious society, you see how people waste their lives waiting and waiting.” In the Islamic theocracy, Sheykhi was told to dedicate her life in service to an invisible, intangible idea. “When you are an artist, you can bring religions down. You can be more effective to people than religion.”

Amini’s murder and the subsequent protests have affected artists from all over the world. Brazilian cartoonist Silvano Mello depicts Amini on a swing, with butterflies coming out of her long curls blowing in the wind. Chinese anti-authoritarian cartoonist Badiucao drew a young woman in school clothes swinging an Iranian government official in the air by his own headpiece. Though there have been uprisings in Iran in the past where little changed, Sheykhi said that she changed her mind about her prognosis of the Islamic Republic as hopeless. Men and women are taking to the streets together, showing that unity and solidarity between gender lines are powerful tools for organizing. Many of those protesting are teenagers, and since the government shut internet off into the country the death toll has risen to at least 70 with 500 or more in prison.

In the United States, there’s a tendency to categorize political issues based on how they line up with whatever conservative or liberal movement you personally agree with. Sheykhi is sick of people interpreting her art through that lens. “People try to turn the conversation for their own right-wing or left-wing benefit,” she said. “But I’m not talking about those things. I’m talking about human beings and human rights. For human rights, let’s remove this terrorist regime because the Iranian people don’t want it.” Though she adapted quickly to the freedom of ideas in America, occasionally people would imply that she herself was a terrorist who agreed with the government’s actions, which angered and hurt her. “To call me that is so wrong. Put sanctions on a government, not on a people,” she said. 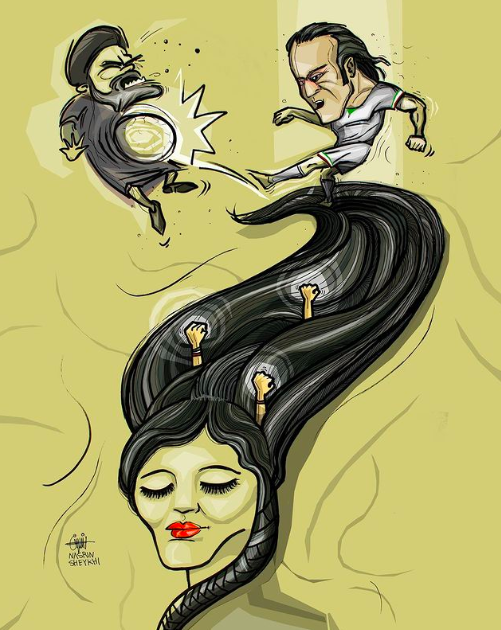 “People try to turn the conversation for their own right-wing or left-wing benefit,” she said. “But I’m not talking about those things. I’m talking about human beings and human rights. For human rights, let’s remove this terrorist regime because the Iranian people don’t want it.”

If there’s one thing I have learned about Sheykhi from knowing and writing about her, it’s that she is unafraid to call out hypocrisy. She decried the way the ruling class lacks basic human empathy for the suffering of the Iranian people: “These days, all these billionaires talk about finding another planet – how can you talk about creating a society on another planet when we can’t even have peace on this one?” and “Elon Musk said he would bring internet back to Iran, but what happened? Nothing!” 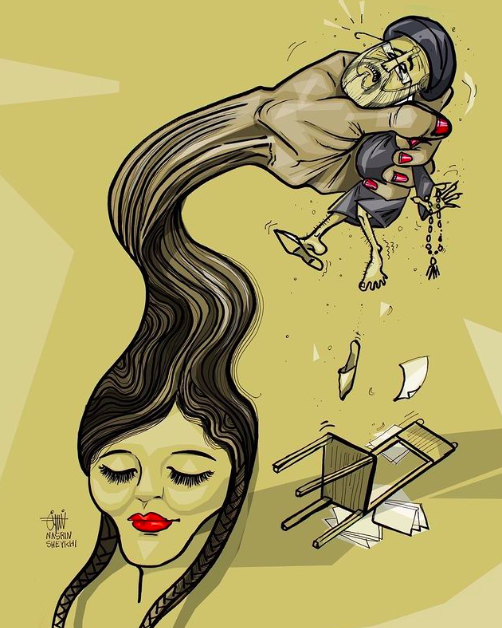 “Your hair has power. These guys are nothing. I was scared a little bit before drawing, but then I thought ‘As a cartoonist, what do I exist for? This is my job.’”

Iranian women are done negotiating. Across more than forty cities in Iran, women have sheared off their hair with scissors, knives, or whatever sharp edge is available to chop it away. In ancient Persian literature, cutting off hair is a sign of mourning, particularly of a dead relative. By cutting off their hair in mourning, the women of Iran send the message that Jina Amini was their sister, too. In Sheykhi’s painting of Amini’s hair morphing into a hand that chokes Iranian president Ebrahim Raisi, Amini’s eyes are closed and her face is serene. Raisi is diminutive and weak, his sandals sliding off his feet and his papers fluttering through the air. The fingers around his neck have bright red nail polish—unabashedly feminine and immodest, using the very beauty that the morality police claim to protect to throttle it.